Few sounds are more instantly recognizable and terrifying than the deafening drone of an air raid siren. Yet, it's something most of us have never heard outside of television and film.

Better known these days under the catch-all term of civil defence sirens, vast networks of these alert systems still exist in several countries worldwide, but Canada's network of wailing Cold War sirens has been out of commission for decades, and surviving examples are vanishing rapidly.

In the heyday of the Cold War, thousands of sirens dotted towns and cities across Canada, ready to alert us of a doomsday nuclear exchange between the United States and U.S.S.R. that, thankfully, never materialized.

Since that peak of siren coverage in the 60s, the advent of intercontinental ballistic missiles (ICBMs) that could rapidly strike targets drove these systems — designed to warn of incoming Soviet bomber aircraft —into obsolescence.

The network was left to wither as policymakers accepted the new reality that there was no defence or preparation against thermonuclear-armed ICBMs, which can vaporize cities just minutes after launching from half a world away.

Initially operated by the Department of National Defence and maintained under contract to Bell Canada, the siren network was no longer of much use to aid in Toronto's emergency preparedness by the 70s, and the system's presence in the city had shrunk to just 78 sirens as of 1980.

The network was ultimately deactivated, and in the over four decades since the system went offline, practically all remaining sirens have disappeared from the poles and roof-mounted positions that once dotted the urban landscape.

Those with keen eyes can still spot a couple of these Atomic Age relics hiding in plain sight in Toronto. Many more have disappeared in the last decade, but the remaining stragglers stand proud, if not mostly unnoticed by passersby.

There's a good chance you've walked past the most prominent surviving air raid siren and never even noticed it. It's located at the northwest corner of Dundas and Shaw, across from Trinity Bellwoods Park, elevated 15 metres above the intersection just inside the property line of Bellwoods Park House.

Did you know that there's a preserved air raid siren at the corner of Dundas and Shaw in Toronto?

This assisted living facility is directly responsible for the siren's continued existence on its grounds, the owners having taken the effort to restore and incorporated the aging siren during the complex's construction. 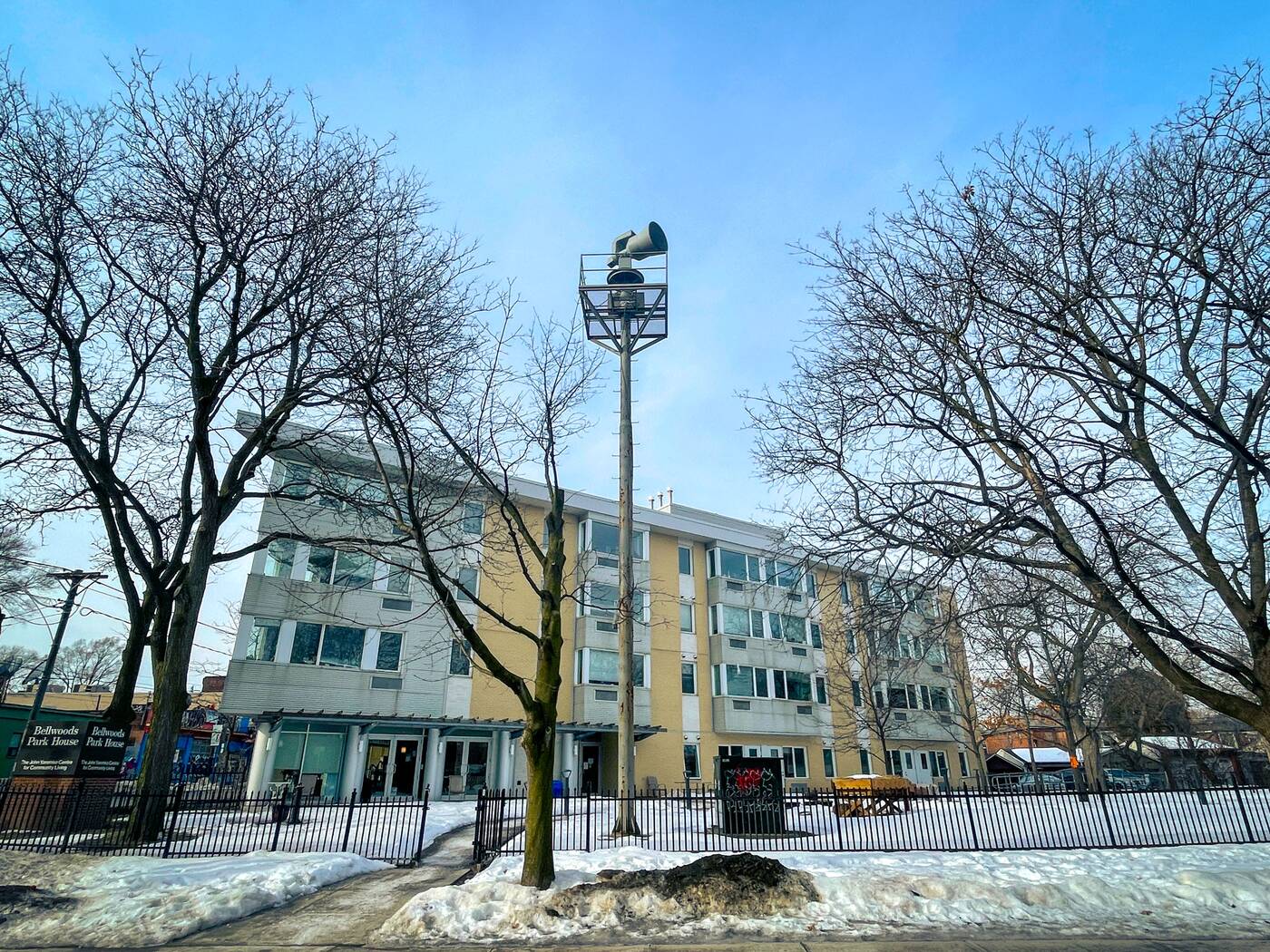 The siren can be found just north of the intersection's northwest corner on the grounds of Bellwoods Park House. Photo by Lauren O'Neil.

Back in its operating days, this Rotating Canada Line Materials siren could crank out around 130 decibels using electric five-horsepower induction motors, equivalent to the sound of a jet aircraft taking off.

But if you live nearby or are just enjoying the famous park across the intersection, fear not, as this deactivated siren is no longer capable of startling the neighbourhood with ear-splitting wails. 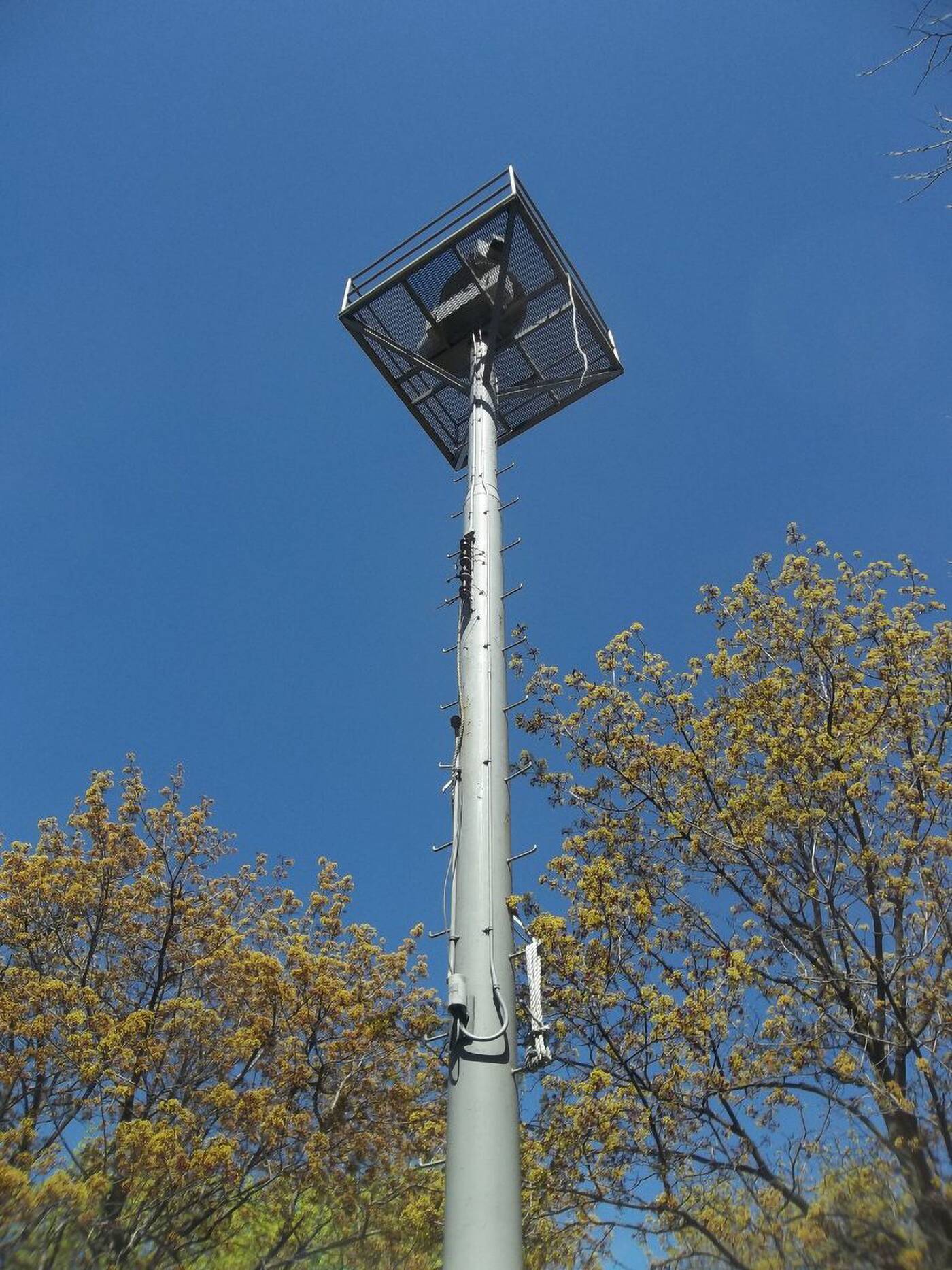 On the east side of the city, you can still spot a decommissioned Mobil Directo model siren installed on the roof of a former police station at the corner of Main Street and Swanwick Avenue, between Kingston Road and Gerrard Street East.

These machines churned out a mind-melting 125 decibels. Not as loud as the tower near Bellwoods, but they could still kick up a hell of a racket. 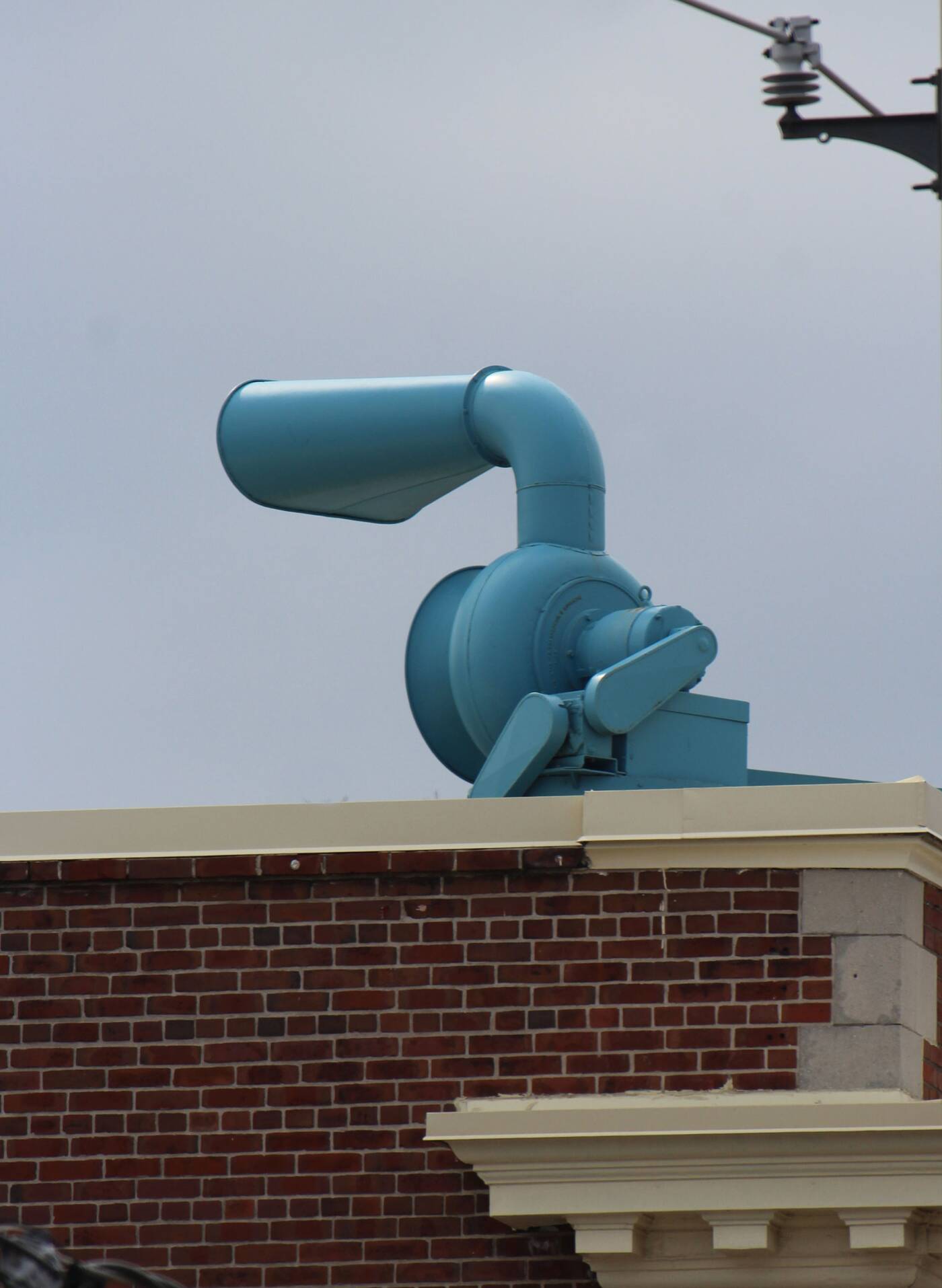 The surviving siren atop a former police station on Main Street. Photo by jmaxtours.

Like its surviving cousin at Dundas and Shaw, the Main Street siren is still around due to property owners recognizing its heritage value and making the conscious decision to preserve a piece of history on their property.

Those are just the ones still known to be standing, and anyone with an interest in these defunct warning systems should check them out while they still have the chance, as these relics have disappeared at an accelerated rate in recent years.

Even just a few years ago, you could spot another Mobil Directo model siren mounted to the west roof of the Harbourfront Centre, looming above Queens Quay. It stood as recently as 2019 but has since been removed. 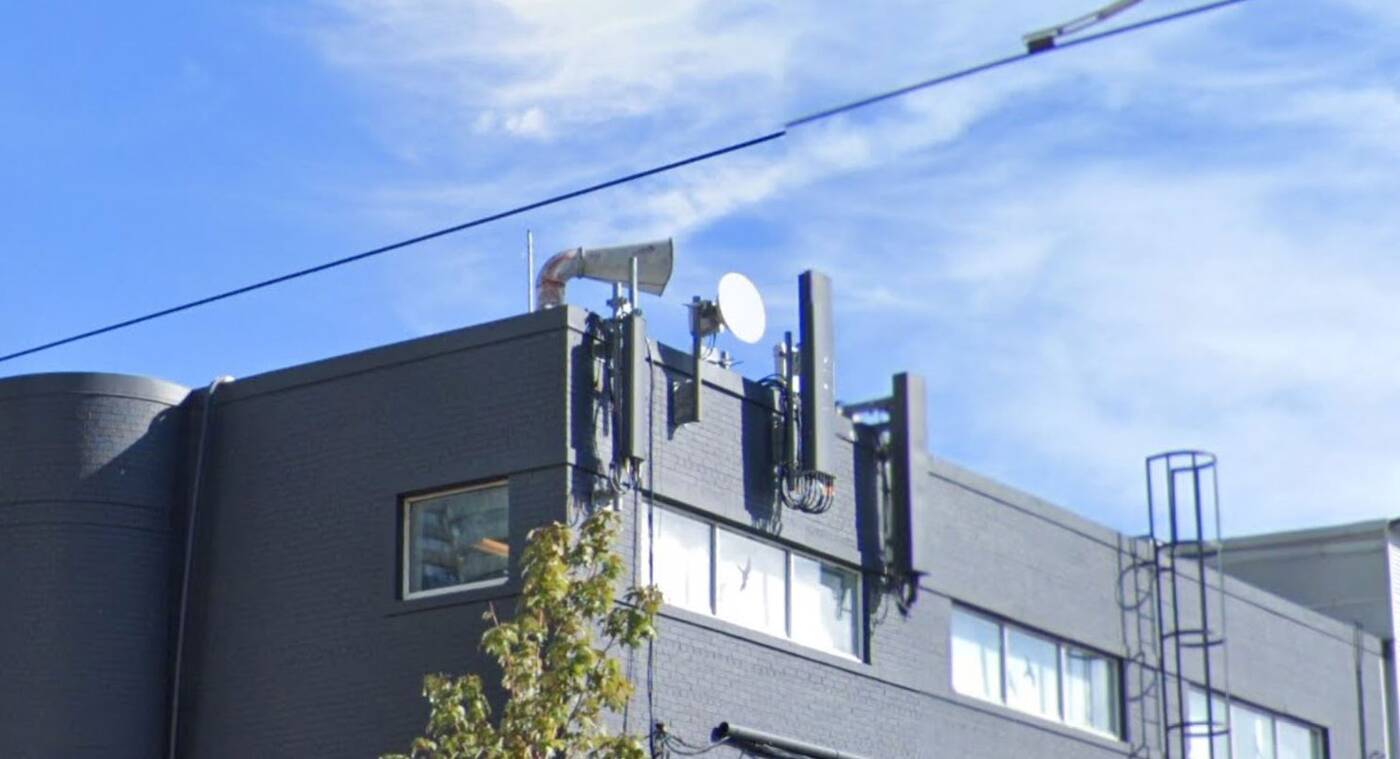 Until as recently as 2019, a siren was visible on the roof of the Harbourfront Centre. Photo via Google Street View.

Another lost siren could be seen until as recently as 2017, previously visible atop a rusted pole north of the tennis courts at Bayview Village Park in North York.

It's been gone for a few years now, fate unknown, but you can still see its concrete base a few metres east of Bayview Avenue near the north edge of the park, a stark reminder that even the suburbs in what was then beyond the city limit weren't safe from the nuclear menace.

On Bayview today, north of Sheppard, and noticed that the Cold War-era air raid siren that once stood in Bayview Village Park is now gone. Not sure if any others remain? Last shot showing this one in Google Street View was 2017. pic.twitter.com/JUv6NgUkOM

Even more sirens have fallen in recent years, like one removed from above a TTC substation just east of Yonge Street and north of Lawrence on Teddington Park Avenue, which seems to have been taken down around 2011. 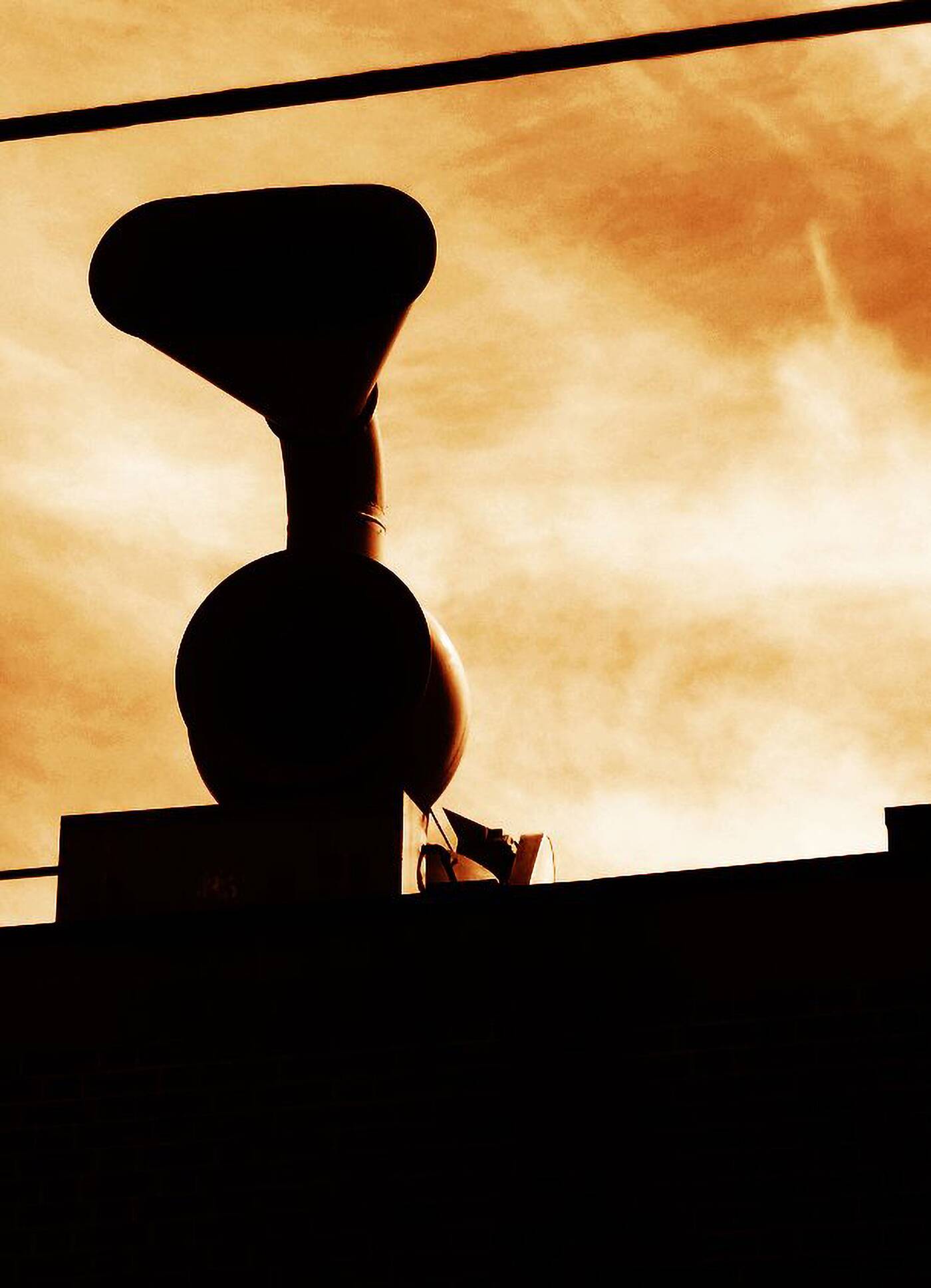 A 2007 view of the now-removed air raid siren atop the TTC substation on Teddington Park east of Yonge. Photo by Danielle Scott.

As a major military centre, the former CFB Downsview, now Downsview Park, also had a siren of its own, a Federal Signal Model 5 with distinctive cone-shaped outlets, which was removed in 2012.

It has been practically impossible to see from street level since its horn broke in 2014-2015, but anyone with an aerial view of the Victoria Building at Ryerson is still able to spot a now-incomplete siren mounted on the northeast corner of the building's roof.

It is no longer apparent and not quite a full siren anymore, but at least a massive searchlight still remains visible from the street below, hinting at the roof's past use.

Many others sirens have been lost when the buildings they use as a platform are demolished. Such was the case with a less well-known siren that was perched atop a former warehouse building just west of Highway 400 and south of Sheppard Avenue West, demolished between 2017 and 2018.

This was, by far, the hardest one to track down, but after some frustrated searching on Google Street View, we found it. 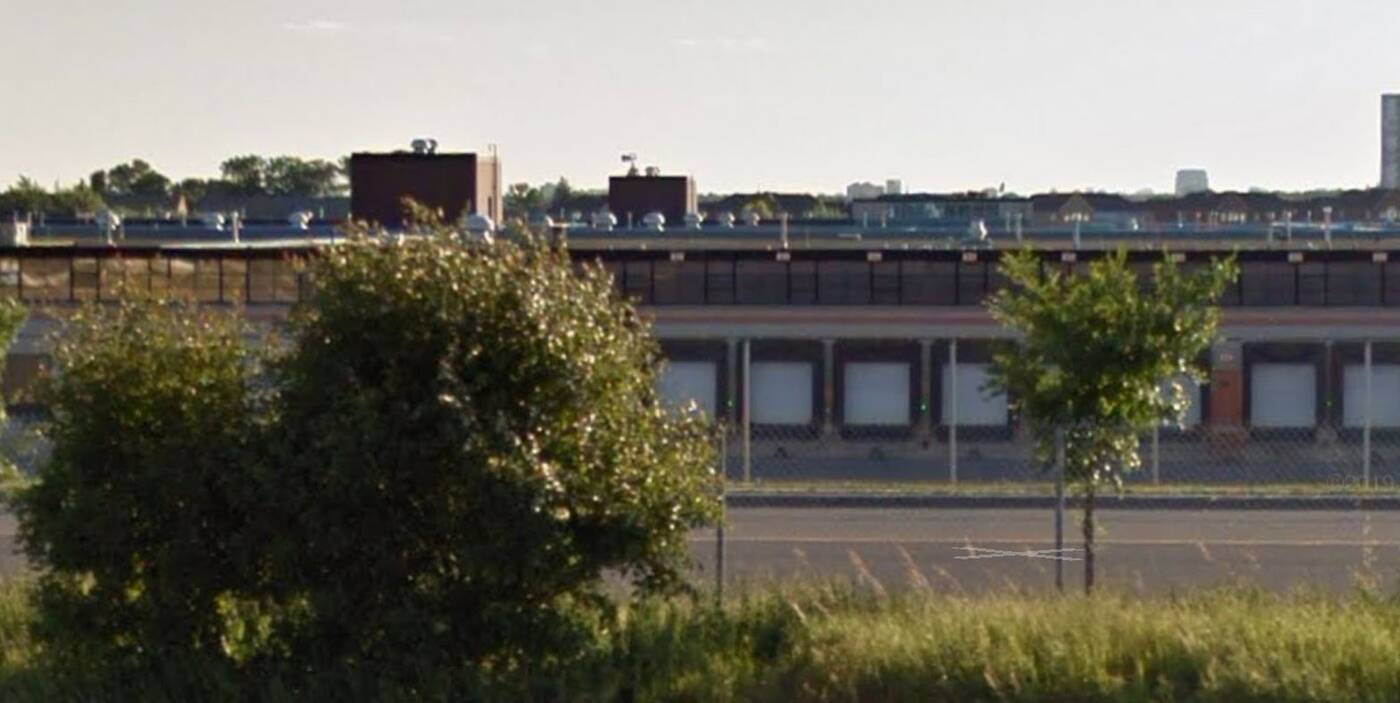 Visible on the warehouse roof just left on centre in this west-facing view from Highway 400, a siren was lost during the building's recent demolition. Photo via Google Street View.

Currently an endangered species, these sirens may be a dwindling link to the past, but they are impractical as a warning system for the current era. There are only two (and a half) known sirens left in Toronto, though one lost siren still lives on in film.

A long-since removed air raid siren is plainly visible atop the roof of the Toy Factory Lofts in Liberty Village, which served as the filming location for the climax of the 1984 comedy movie Police Academy. 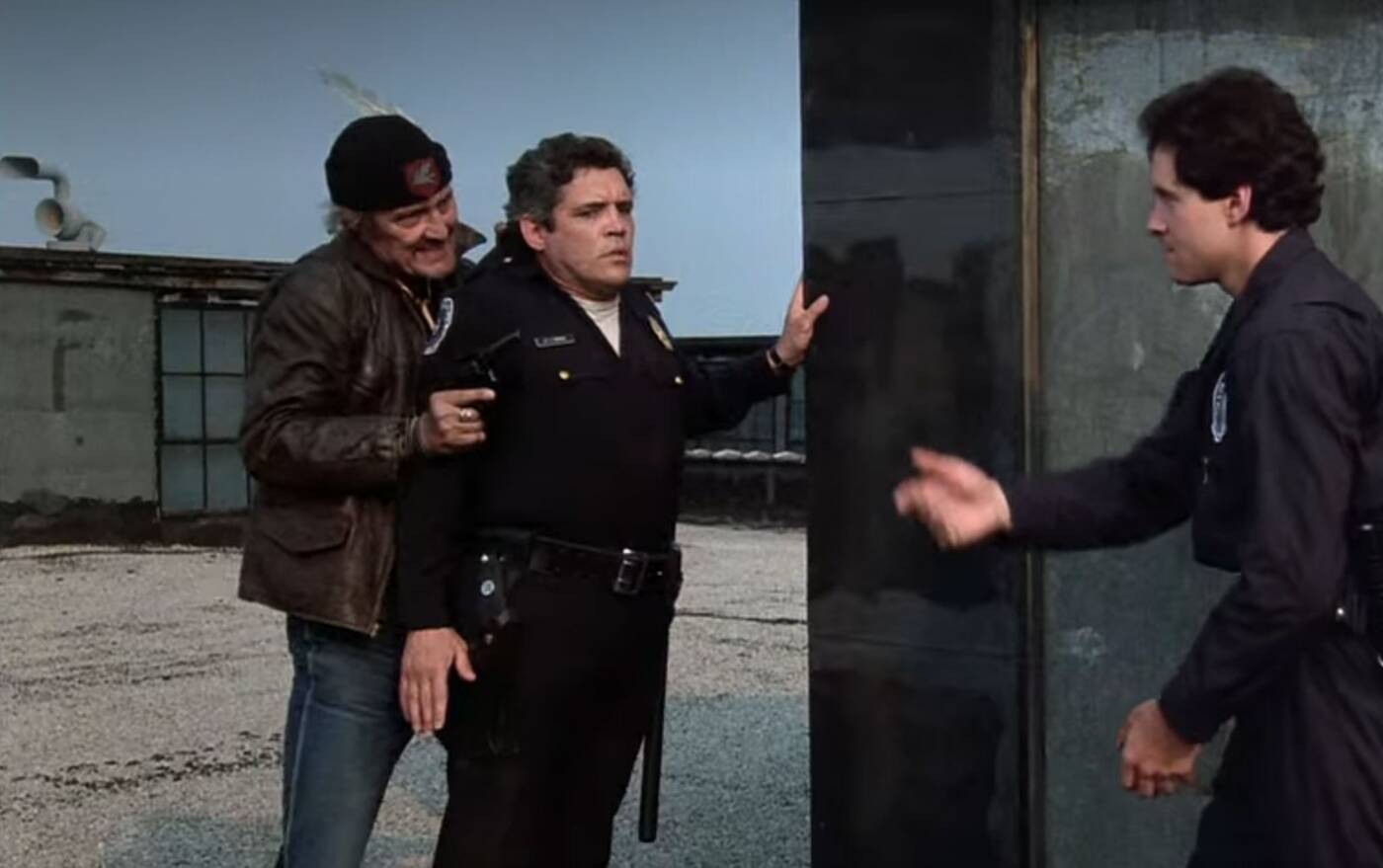 An air raid siren (far left) was mounted on the roof of 43 Hanna Ave. in Liberty Village, now known as the Toy Factory Lofts. Image by Warner Bros.

Though the vast majority have either been scrapped or acquired by siren enthusiasts, the city thinks there may be more hiding around.

According to Anthony Toderian, a spokesperson for the city, "our last report says there was one around Victoria Park and Eglinton that might still be there."

"There may also be one between buildings around King Street East of University that was retained and painted by site owners as a display," added Toderian, warning that "if found, there is a probability that some of these may still be still live at 240 volts if they were never disconnected and removed."

Since 2015, Canada has used the National Public Alerting System, better known as Alert Ready, to warn the public of emergencies regarding fire, natural disasters, biological and radiological threats, terrorist attacks, Amber alerts, and other civil emergencies.

Nobody expects ICBMs to rain down and incinerate the city any time soon, but other sirens are still in use in Toronto in areas around potential hazards such as chemical plants. Those living nearby are subjected to regular brain-rattling testing, but otherwise, the era of the wailing siren has come and gone in Toronto.

Just beyond the Rouge River and Toronto's eastern boundary, a network of high-powered speaker towers serve much the same purpose, though they exist to warn residents and businesses of danger from the nearby Pickering Nuclear Generating Station. The closest of these towers can be found just over one kilometre east of the Rouge River.

If you aren't living or working near one of the aforementioned chemical or nuclear warning sirens, you're unlikely to ever hear any of these ominous wails out in the real world.