If you thought the term "volcano" was limited to land formations that spew scorching magma from under the earth's crust, you'll want to think again, because Ontario is actually home to some volcanoes of its own, and they're of a very different — nay, completely opposite — type.

Authorities are asking people in the province who live along the Great Lakes to stay off the frozen water and keep an eye out for the peculiar and little-known phenomena.

Similar to how volcanoes are caused by clashing tectonic plates, ice volcanoes occur when moving waters push shelf ice against itself and/or the shoreline, leading to a ridge, often close to land.

Ice shelves are forming at various locations along Lake Ontario's shoreline. Nifty to look at, but not safe to explore. While the water is shallow underneath, if you pop through, you may not get out.

Though they may appear like a frozen snowbank or simple ice accumulation, they often have hidden holes in the centre that lead directly to the water below, which can continue to form new cracks and holes if active.

Thus the hazards, though not actual volcanoes, can be just as fatal for anyone who encounters them, as they are easy to miss, fall into and get trapped inside — the result of which would almost surely be drowning in frigid waters after a very difficult, dangerous and futile rescue operation. 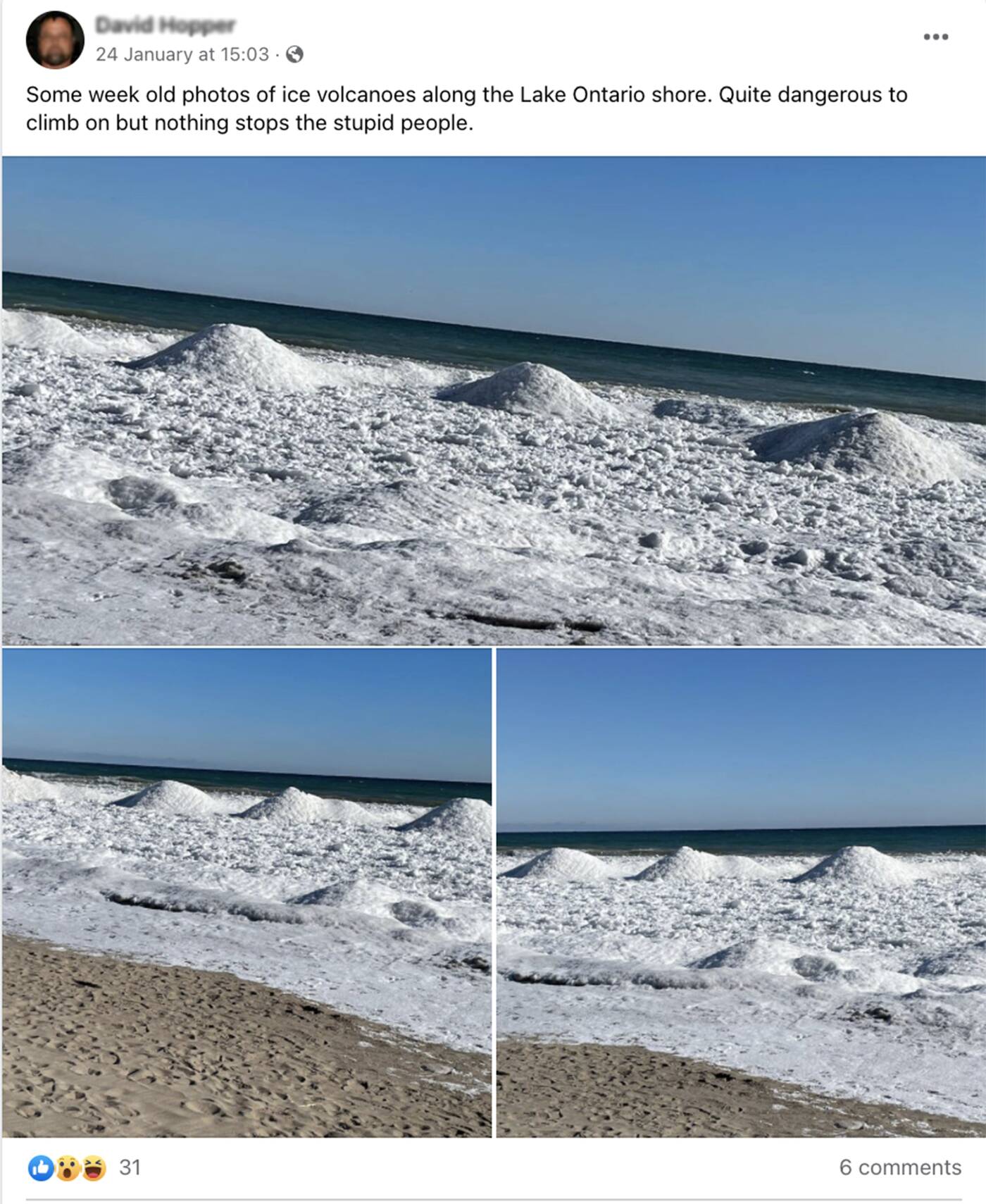 Members of multiple community organizations and Facebook groups, the Weather Network and even Halton Police have issued cautions in recent days, making the public aware of how dangerous beaches along Lake Ontario can be during a deep freeze like the one we're currently in.

Almost all include a handy and widely-circulated cross-section infographic by one Tom Gill detailing how the volcanoes work.

Though a representative for the Toronto Police Service told blogTO that no incidents involving ice volcanoes have been reported yet this month, they did say that "the shelves do form and do exist in Toronto."

And, some on social media have cited unconfirmed reports of people and animals falling through in the Beaches neighbourhood.

Safety reminder when near water covered in ice and snow. pic.twitter.com/QYczAdwzju

Though some individuals have ventured onto the very frozen Toronto Harbour in recent days, as Halton Police have said, no natural ice is guaranteed to be stable or safe, and residents are best to stay away.

This is especially true when it is hard to determine where the land ends and the water begins.

Instead, the strange mounds are best enjoyed from afar, and can even spout water when it is choppy undernath.