An apparent Tie Domi fan caused a kerfuffle at one of Toronto's most-popular outdoor skating rinks this week when he flat out refused to get off the ice for some regularly-scheduled resurfacing.

Captured on camera by a TikTok user called nagardudar, the incident is as cringeworthy as it sounds, but a whole lot more hilarious in the context of Canadian hockey bros.

The 38-second-long clip, uploaded on Wednesday, starts with a dude in hockey skates, fists brandished, moving toward an individual in sneakers on an otherwise empty rink at Nathan Phillips Square on the evening of Tuesday, Jan. 4.

"Person refusing to get off the ice, Nathan Philips Square, Toronto Canada," reads the original caption.

Some cold-weather gear can be seen scattered about behind the man, suggesting that he had removed his gloves (or, as some say, "dropped his mitts") while engaging in the aggressive behaviour.

Three people, at least one of whom is an official rink attendant, engage with the man as he holds up his dukes in front of Toronto City Hall.

Meanwhile, people on the sidelines shout things such as "Hey! Idiot! Get off the ice!"

All of a sudden, the camera pans right and it becomes strikingly clear why the man is being asked to move: A zamboni (ice resurfacing machine, for the uninitiated) has already completed a full ring around the outer rink and is moving closer and closer toward where the bro stands.

Even the zamboni driver seems annoyed, shouting as he passes the small group "Hey! Get off the ice!"

When the camera pans back, we see a city staffer speaking with two other people who'd been arguing with Mr. "I can fight a zamboni." The aggro man himself can be seen skating around and picking up some of the gear that he'd shed. 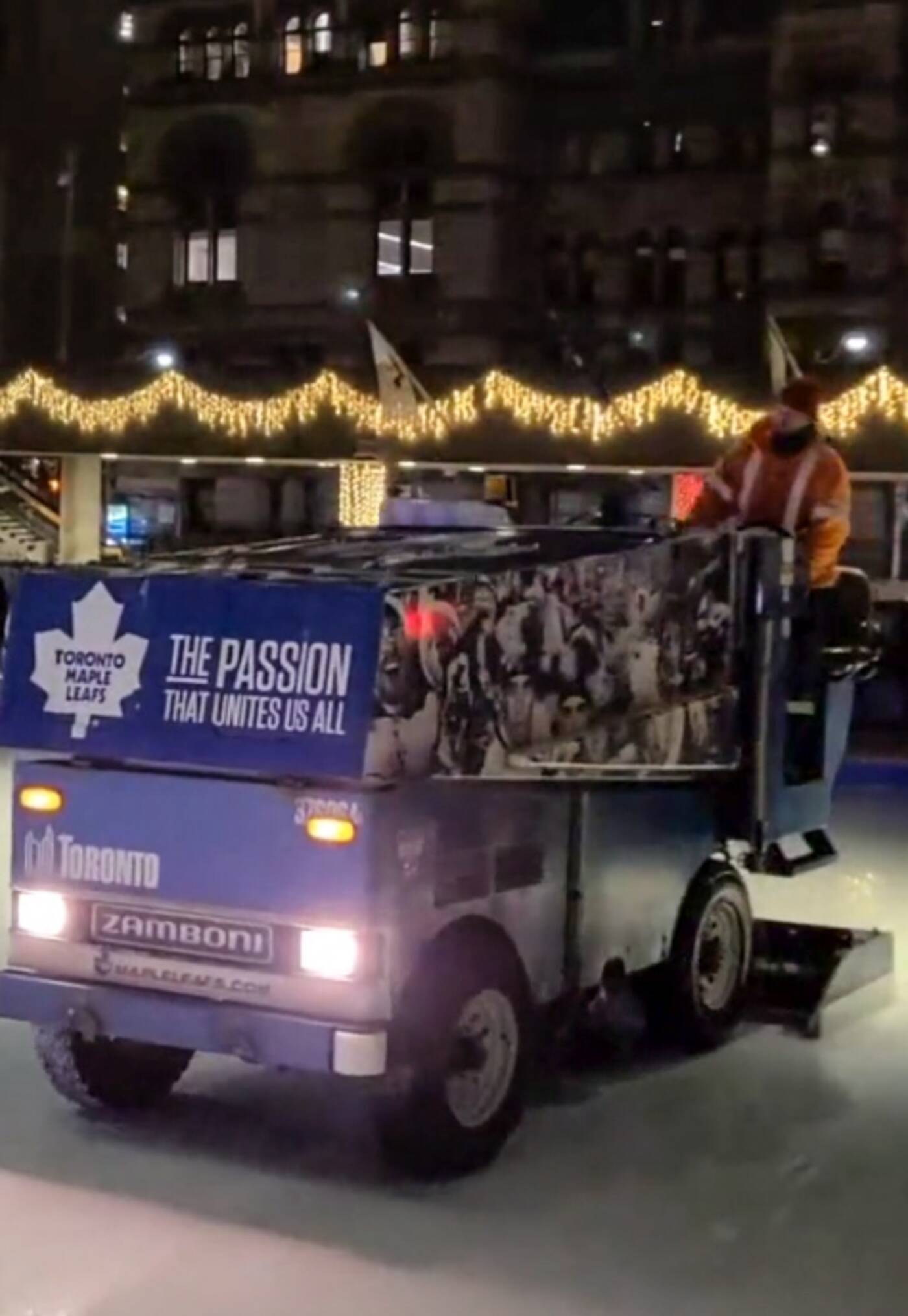 Zambonis must periodically resurface the ice at public skating rinks in Toronto for the safety of everybody. Image via nagardudar/TikTok.

The clip stops there, but city officials confirmed to blogTO that the incident recorded in the TikTok video did occur at the Nathan Phillips Square rink.

"The City is currently investigating the circumstances surrounding this interaction and how a city employee was involved," said Anthony Toderian for City of Toronto Media Relations.

"Those using city skating rinks should always vacate the ice surface for their own safety while ice resurfacers are cleaning [it]."

TikTok commenters agree, one writing "no need to get off the ice, the Zamboni driver gonna send it anyway."

Nearly 80,000 people have viewed the original TikTok clip since it was posted yesterday. There's no word yet on the unidentified man or why he did what he did, but we can confirm that nobody was run over by a zamboni in Toronto this week.

It was revealed on Friday that the skating rink freakout was a prank staged by 6ixbuzzTV.