Blink, and you just might miss it, but a tiny new park in Toronto is offering a brief but rich lesson about the city's history — a story that very much mirrors the world we live in today.

Officially opened this past July, Grasett Park is among the smallest public parks in Toronto, measuring just 130 square metres in area. 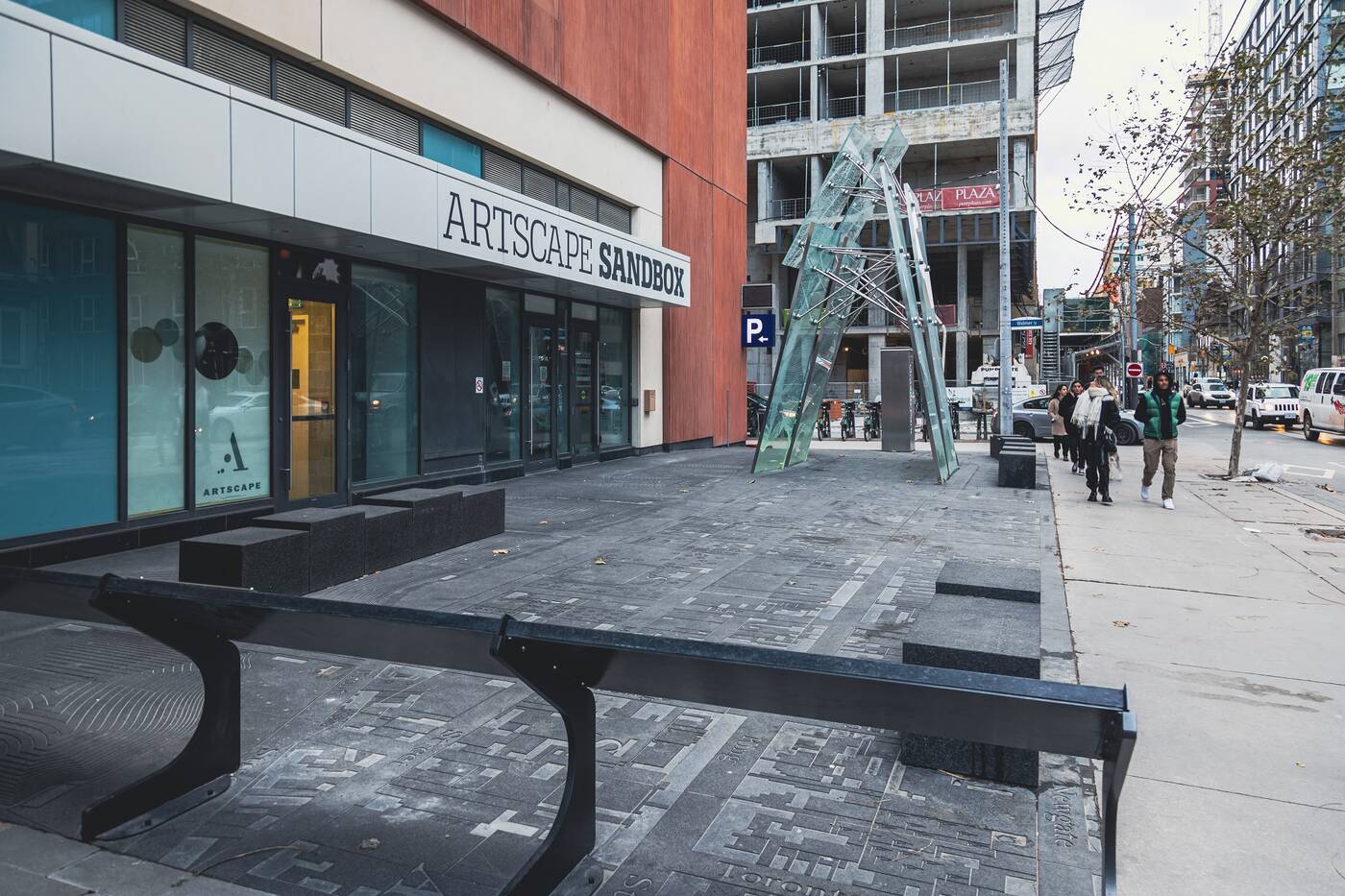 Looking west across the park, showing interpretive plaques at the east end and a glass structure to the west. Photo by Jack Landau.

Grasett Park is the second collaboration between the city and Canada Ireland Foundation on a public space celebrating Toronto's response to a wave of Irish migrants fleeing famine in the summer of 1847. Over 38,000 migrants almost tripled Toronto's population of just 20,000 that year, many arriving sick and in desperate need of medical care.

Complementing the similar themes of Ireland Park on the waterfront, this park can be found at the corner of Adelaide Street West and Widmer Street, a site where temporary fever shacks were erected as Toronto's first purpose-built General Hospital lacked the capacity to handle the influx of new arrivals suffering from typhus.

Among those working to care for the arriving typhus-stricken migrants, Dr. George Robert Grasett — the park's namesake — would himself become one of the victims of this typhus outbreak just under a month after his appointment as the hospital's Medical Superintendent and Chief Attending Surgeon.

It sounds all too familiar, with the fever shacks an early predecessor to the field hospitals set up near modern hospitals in response to the pandemic, and first responders disproportionately affected in both the 19th-century typhus outbreak and current crisis.

Though the space has been completed for some time, the park's opening was held back until July 16 to mark the 174th anniversary of Dr. Grasett's passing. The conditions of the park's opening reflect the site's heritage, celebrated with a virtual ceremony due to the still ongoing pandemic.

While it may be small, every square inch of the new public space — designed by Denegri Bessai Studio — is packed with historical references, down to even the surface you walk on. 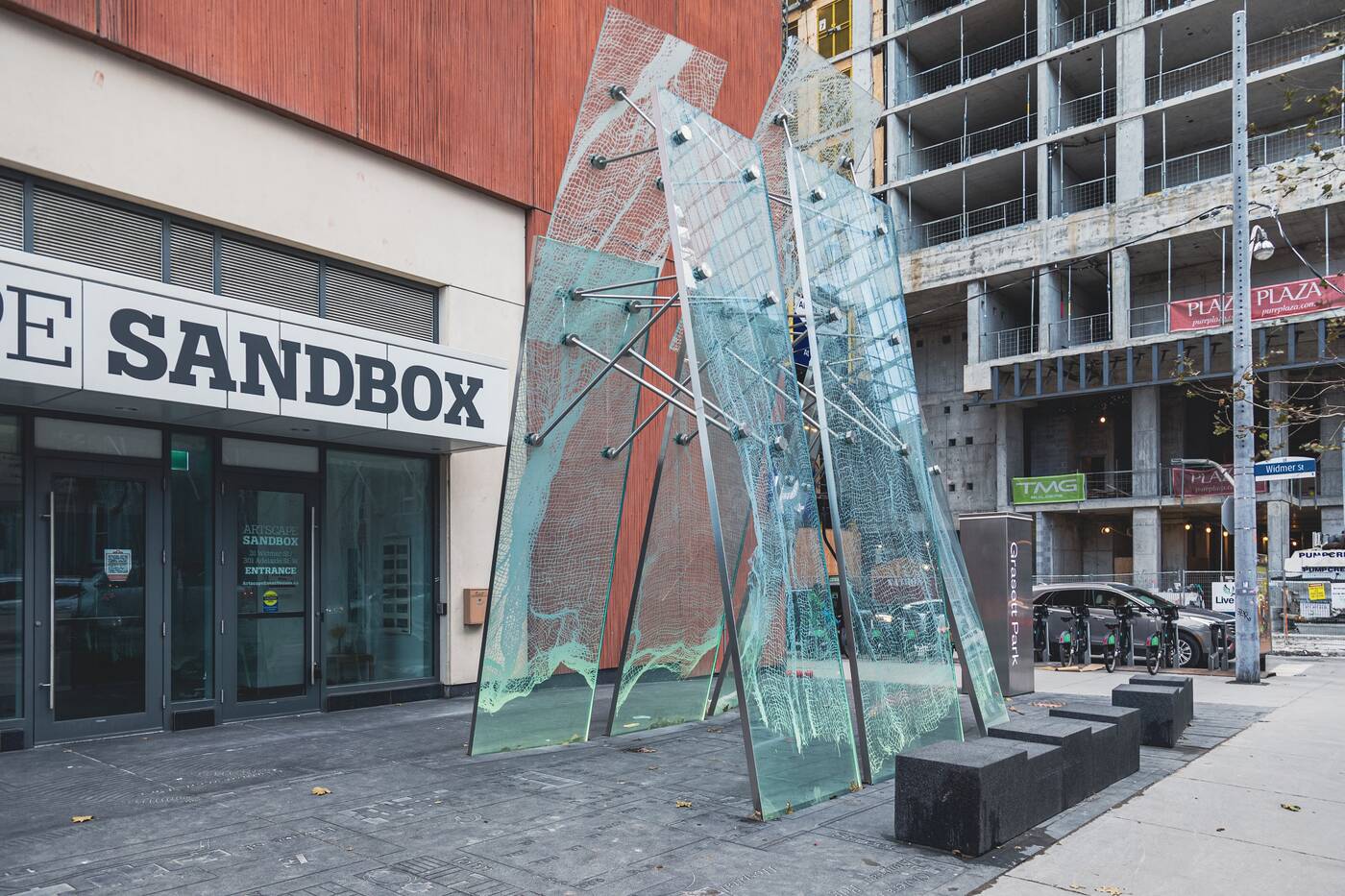 Looking southwest across the park from the sidewalk on the south side of Adelaide, east of Widmer Street. Photo by Jack Landau.

What seems like standard paving from a distance reveals more for those willing to stop and explore. This black Quebec granite surface is carved with an 1842 map of the city, showing a street grid that has changed considerably over almost 18 decades. 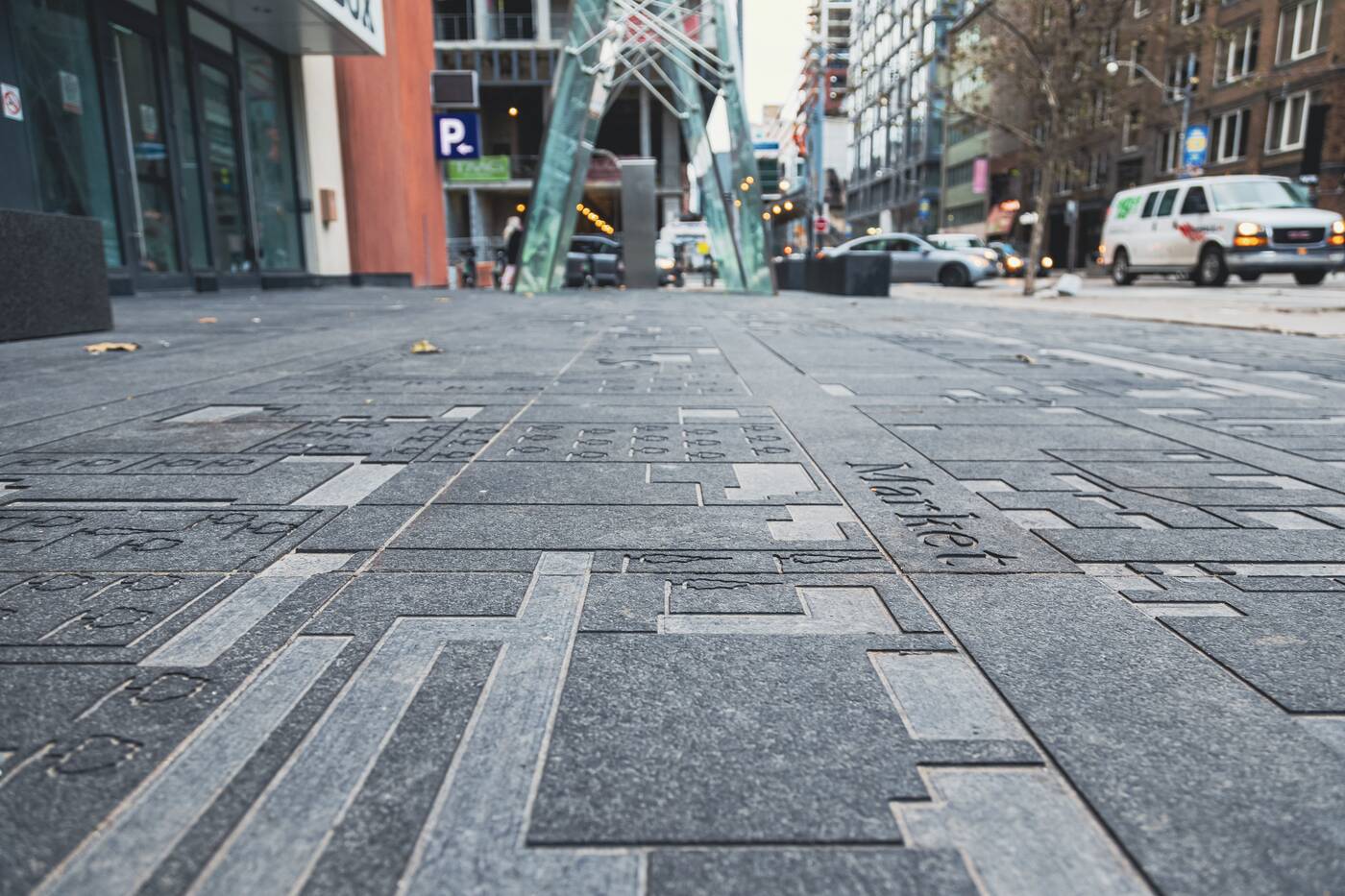 An 1842 map of Toronto is etched into the park's granite pavers. Photo by Jack Landau.

Even the pattern on the park's centrepiece fever-tent-inspired, ten-meter-tall laminated structural glass canopy holds significance, representing the cheesecloth used for bandages and fly-netting during the outbreak. 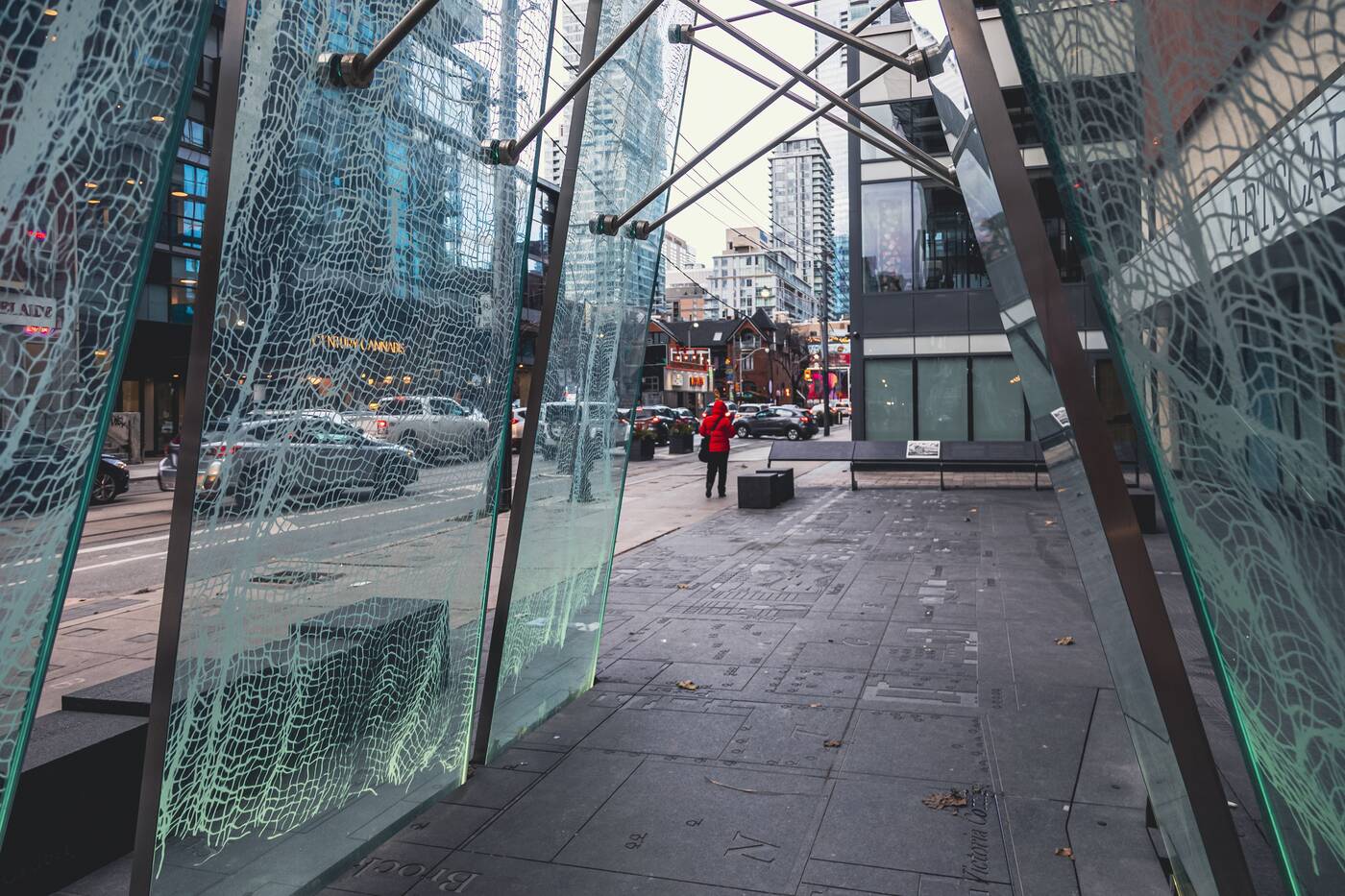 This centrepiece comes alive after dark with some striking lighting, bathing the intersection in a range of cycling colours. 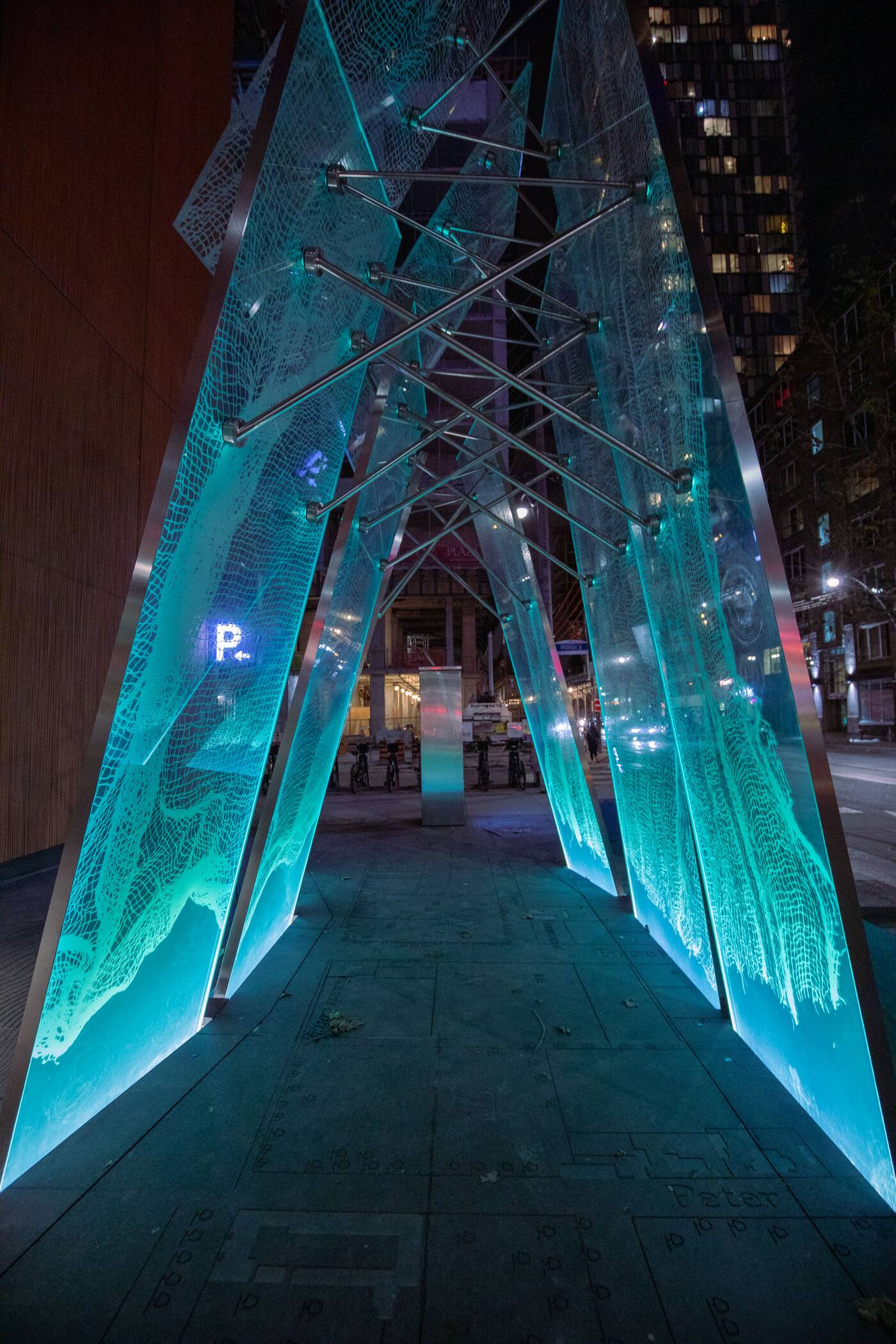 With plaques, sculptures, a few uneven benches, and not a single square inch of grass or greenery, the public space functions more as an interpretive installation than a true park.

It sure is tiny, but it is somehow not the smallest, a City of Toronto representative confirming to blogTO that there are "a handful are even smaller."