In the wake of a ransomware hack that left some 25,000 TTC employees vulnerable to identity theft, the transit commission is encouraging those who were affected to seek support by calling a special phone number — a very special phone number, as it turns out.

According to the union representing TTC workers, ATU Canada, management directed staff to call a 1-800 hotline earlier this week for help after revealing that their personal data had been compromised.

The transit commission stated on Monday that an October 29 cybersecurity incident had potentially given hackers access to the names, home addresses and social insurance numbers of at least 25,000 current and former TTC employees.

All impacted workers are getting three years of credit protection from the TTC through TransUnion to protect them from identity theft, but management also encouraged workers in a memo this week to contact their EFAP (employee and family assistance program) for further help if needed.

"I understand that this is not an easy time for employees," reads the reads the memo, as sent to blogTO by TTC whistleblower Rocco Signorile on Tuesday. "In addition to the TransUnion support available, you can also contact our Employee and Family Assistance Program at 1-800-572-0009."

It wasn't long before someone tried to call the number, only to be greeted by a sultry voice welcoming them to "America's hottest talk line."

"Guys, hot ladies are waiting to talk to you. Press one now," states a woman's voice upon calling the number above from Toronto. "Ladies, to talk to interesting and exciting guys free, press two to connect free now!" 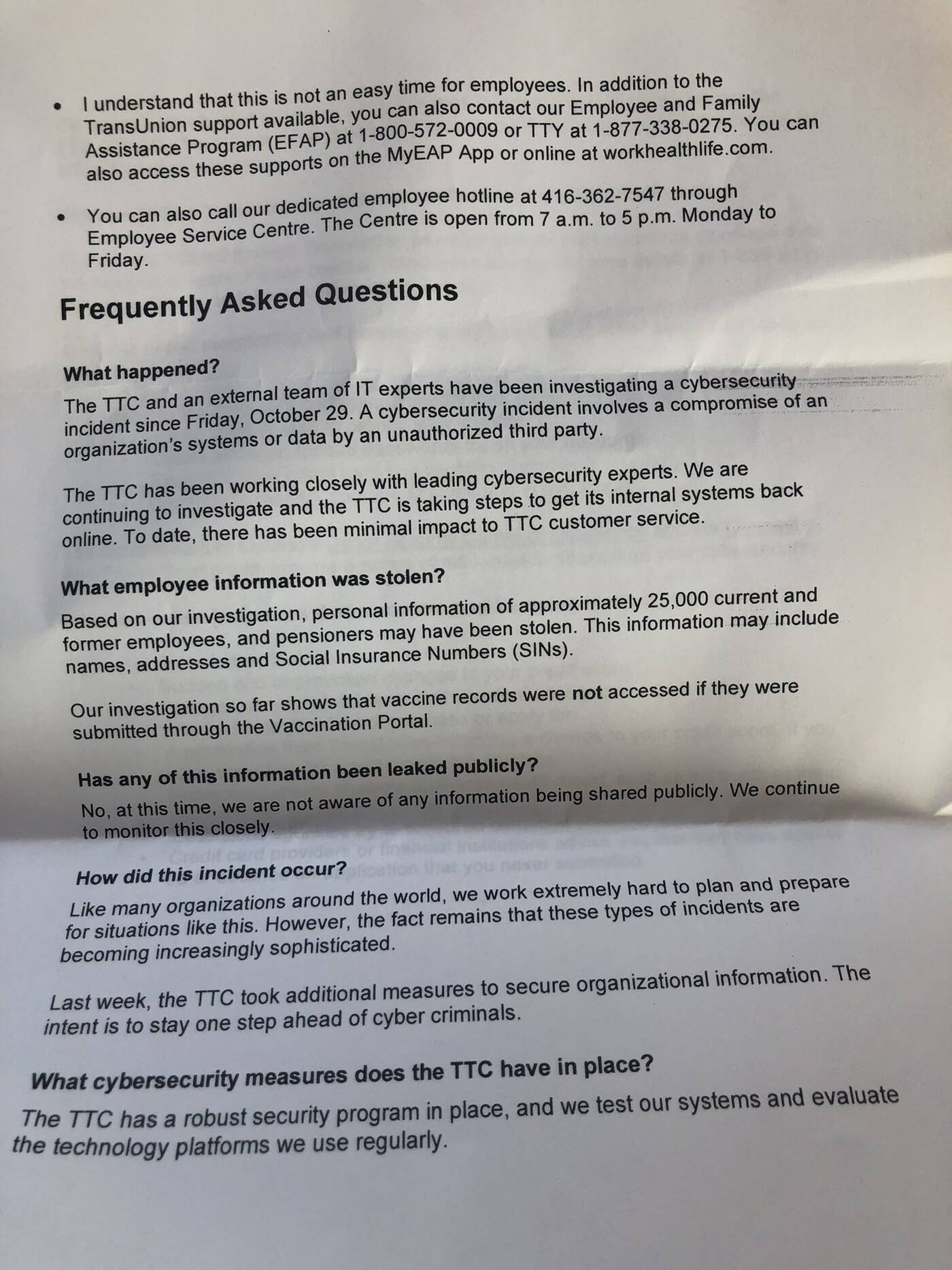 The Toronto Transit Commission accidentally gave out the phone number of an adult chat line instead of one that would connect employees with assistance following a cyber attack. Image via Rocco Signorile.

News of the blunder has been spreading on Twitter all morning, eventually prompting ATU Canada to issue a statement condemning what they call "a continuation of the mismanagement of the TTC and reflection of their carelessness and neglect when it comes to its workers."

The commission has told employees that the inclusion of the "adult chat line" number in its memo wasn't intentional — it was merely a typo.

Still, union leaders are furious, writing in a release issued Tuesday that "this incident is one in a series of recent decisions by TTC management that has led to an antagonistic environment for not only workers but transit riders as well."

"This recent failure is yet another example of the sour relationship between management and local 113, this should not be happening to the people who kept and continue to keep Toronto moving throughout one of the most difficult times in the city's history."

The union is once again calling upon TTC CEO Rick Leary to resign, but not everybody is bent about the incident — some are actually finding it quite funny.