Erased by generations of industrial development, the mouth of the Don River is gradually re-emerging in Toronto's Port Lands through a colossal infrastructure project unlike anything ever seen before in Canada.

By 2024, the project will have created a new urban island with parks, cycling infrastructure and extensive habitats for wildlife, formed by a new mouth of the Don River currently being dug south of the Keating Channel.

A VR view produced by Waterfront Toronto offers a great preview of what's to come, along with regular aerial updates that put the scale of the project into perspective. But there's so much more to see from the ground, where the finer details come into focus.

A new bridge, an underwater tunnel, trees that reinforce riverbanks – these are just some of the new things happening in the Port Lands. Watch all the latest progress: https://t.co/6F8Dby2RJq pic.twitter.com/d2GrqAJDmP

At the heart of this project, the new river valley is being dug in phases, necessary to keep the excavation dry and accommodate traffic through the area. There's a lot of ground to cover on this kilometre-long path, and opening an annotated map in a separate tab will help keep things clearer.

More progress on the Elbow in #RockyRadar! I’ll post about it more soon but we found something pretty cool in the dark blue area. pic.twitter.com/ElP9Py1Uns

A large portion of Commissioners Street has temporarily ceased to exist during this construction, with traffic using Villiers Street as the primary east-west thoroughfare through the Port Lands. The reason for this becomes much easier to see when facing southwest from the corner of Don Roadway and Villiers Street. 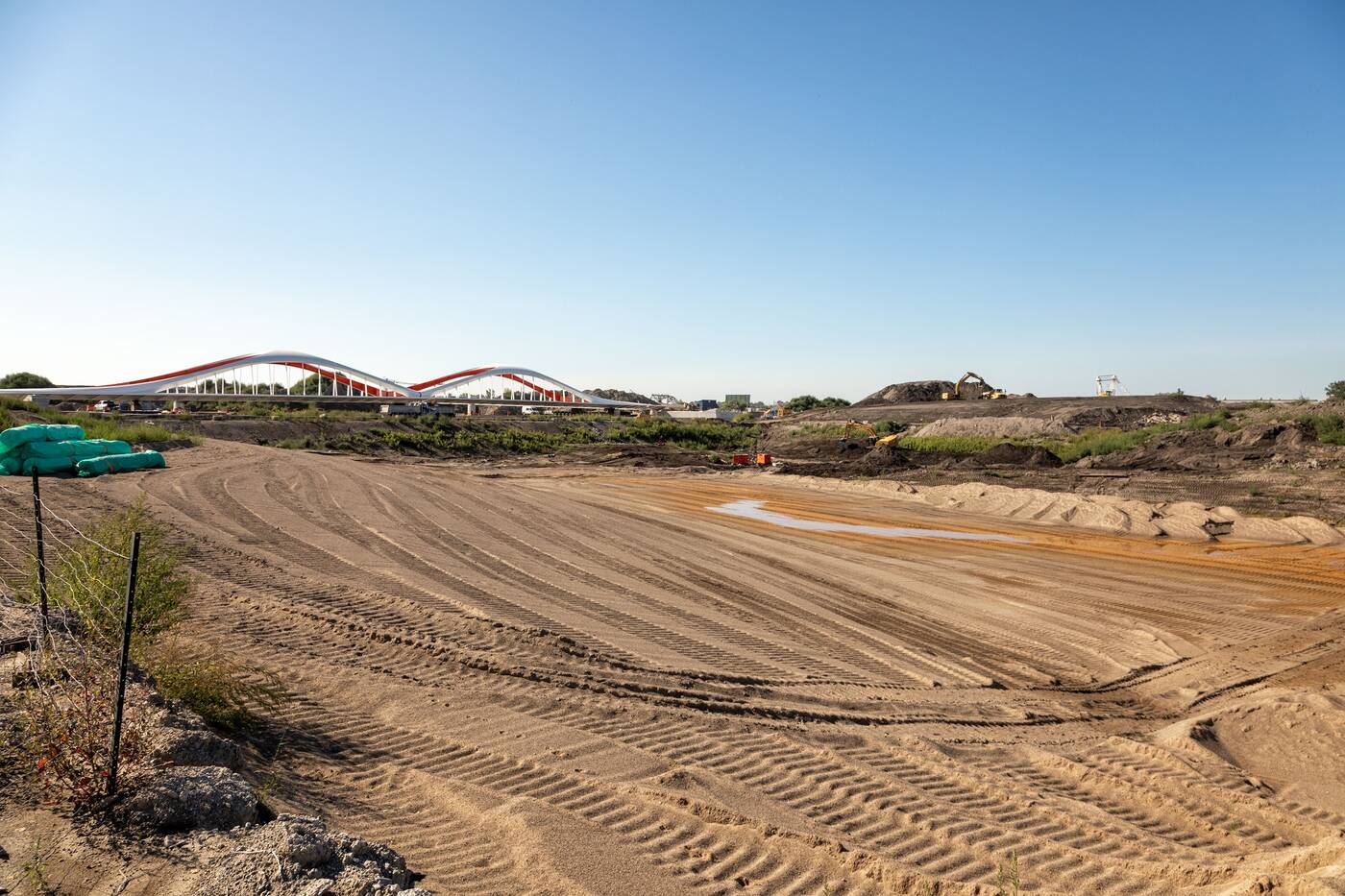 The east end of Commissioners Street stands as a temporary causeway surrounded by the new river valley being etched out of the ground. North of the causeway, a section of the valley home to an ice management area is being carved. This area will catch ice from upstream and prevent it from careening around the river bend further to the south. 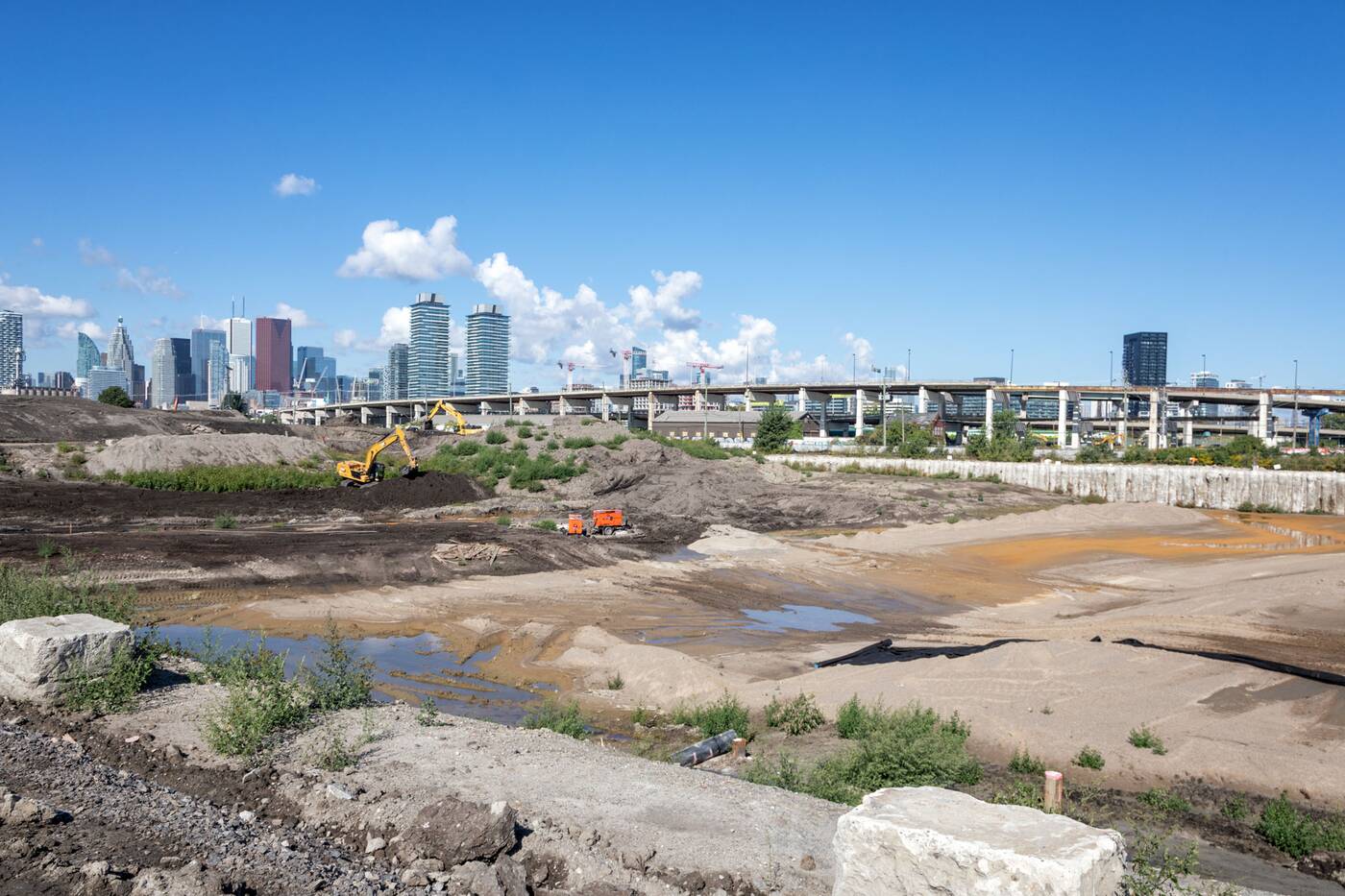 Standing at the centre of this causeway is the new Commissioners Street Bridge, which arrived in two sections over the summer. 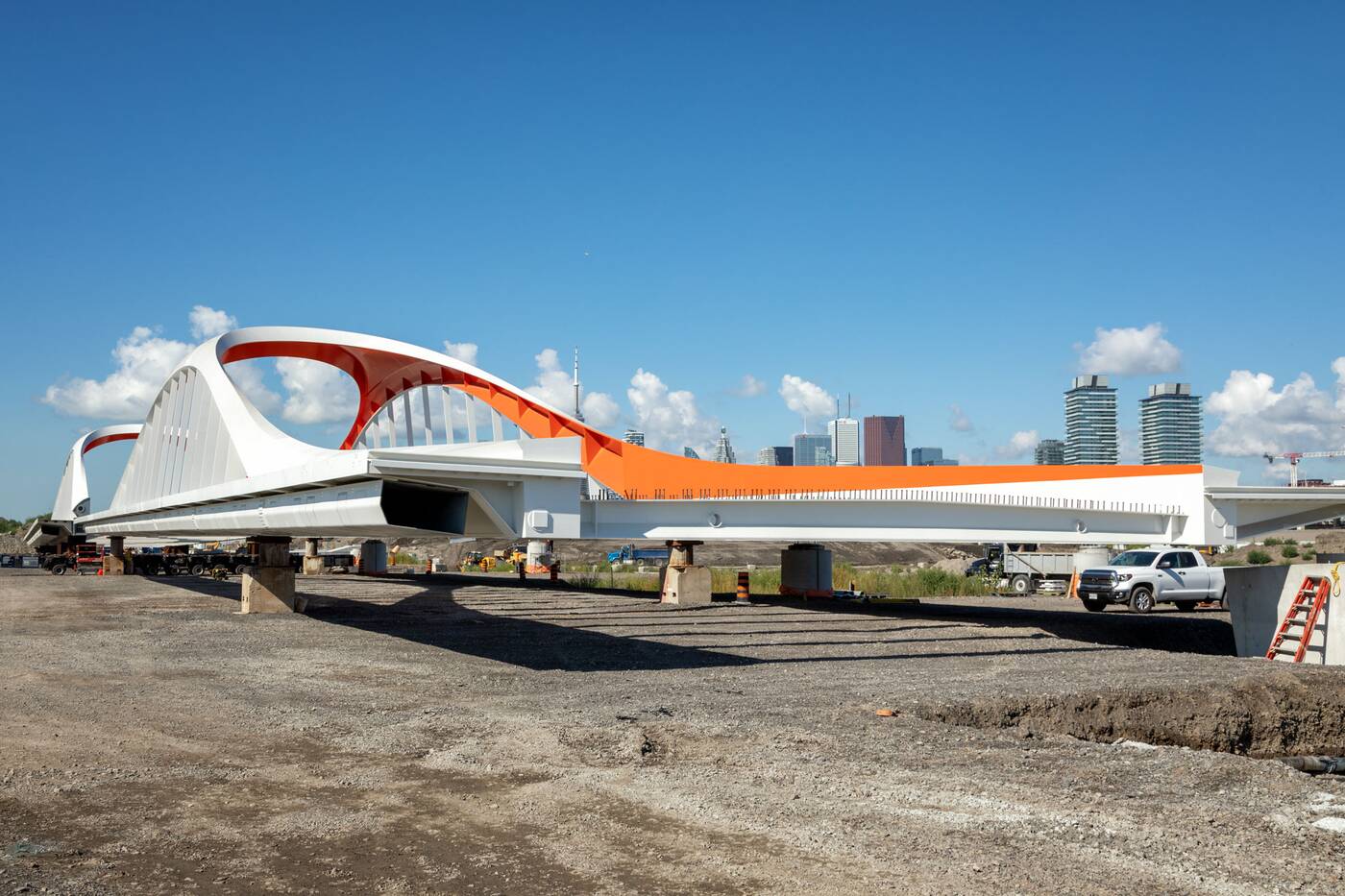 The bridge stands on temporary supports next to its permanent concrete foundations, both about 1.5 metres above the current street level. 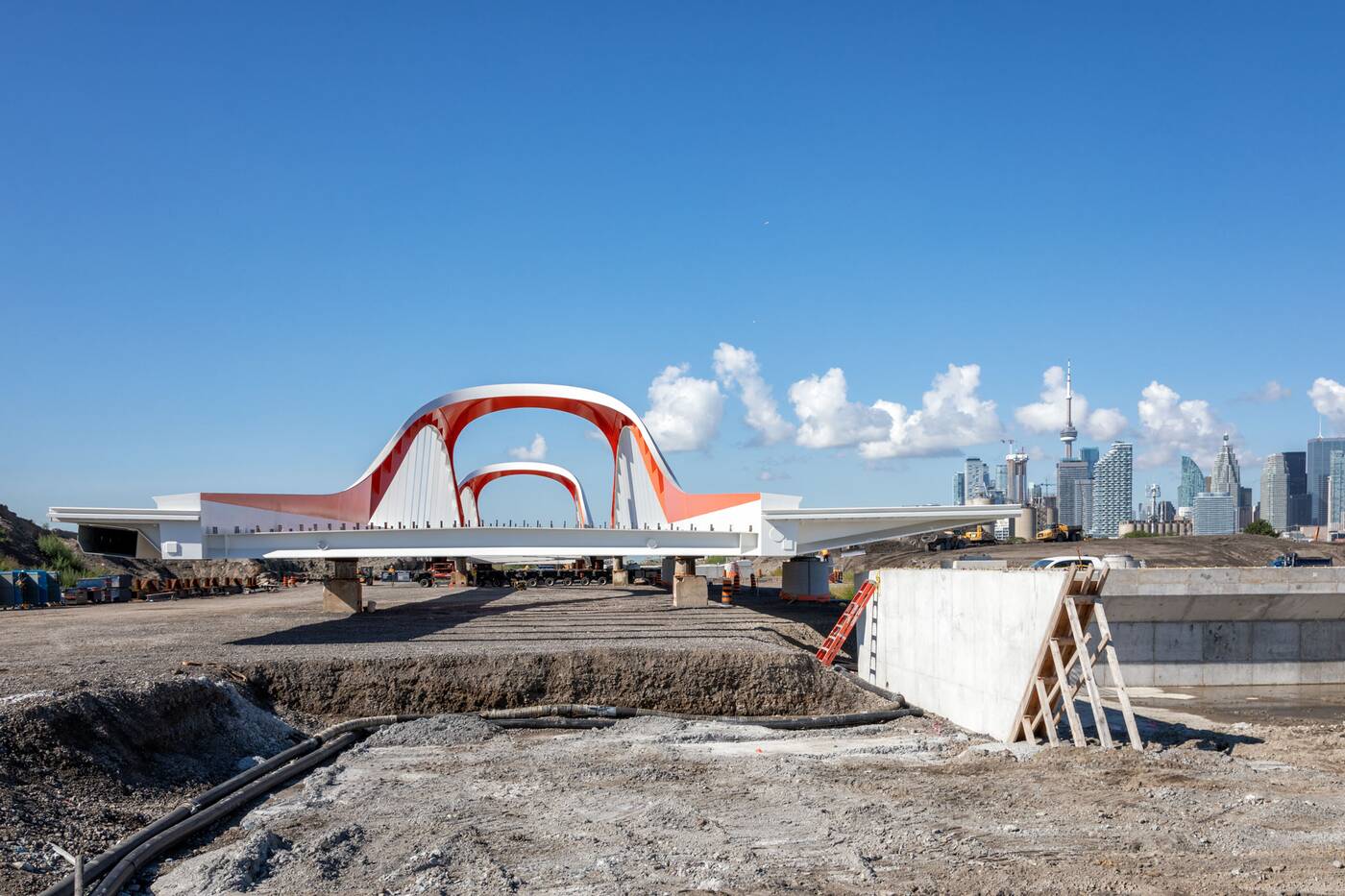 This elevation differential exists because grades in the Port Lands — including Commissioners Street and other roads in the area — will be raised for added flood protection, the bridge marking the future road height. 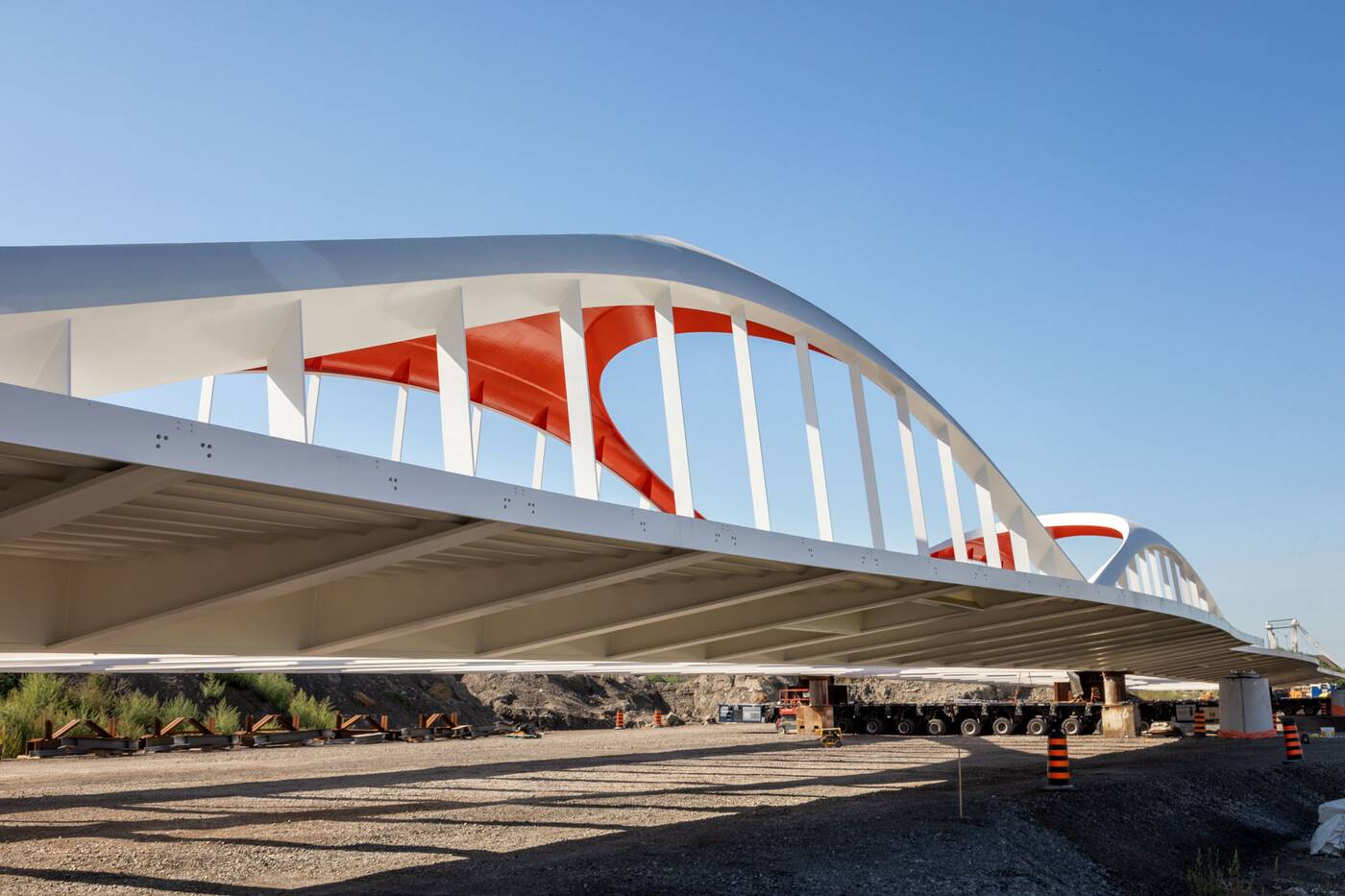 Commissioners Street's cool new bridge will include dedicated transit lanes, separated cycle tracks, and a pedestrian pathway along the street's south side. Below this pathway, new electrical conduits built into the side of the bridge will soon bring power into the area that will become Villiers Island when the river first flows in a few years. 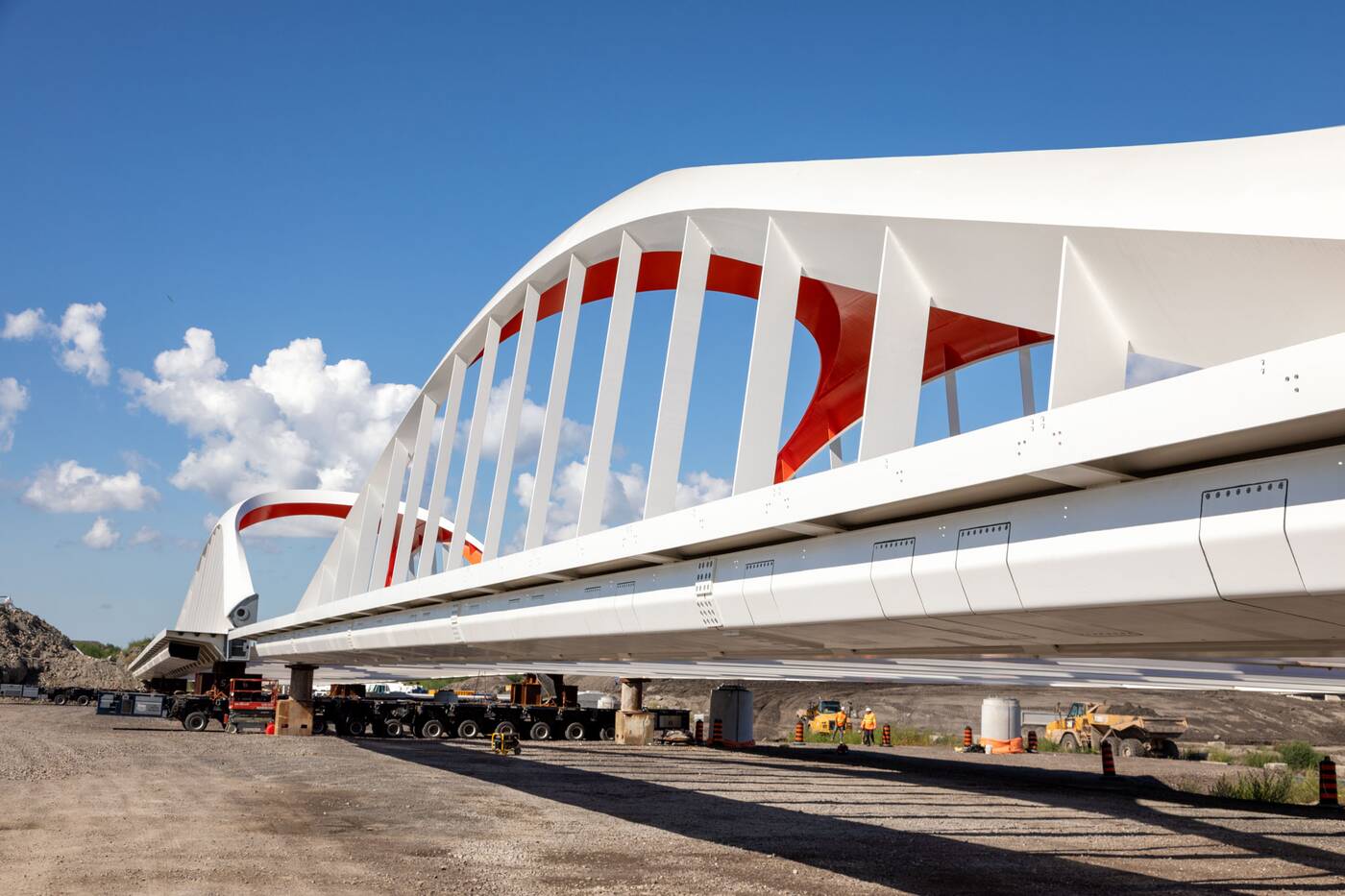 Electrical conduits along the south side of the new Commissioners Street Bridge. Photo by Jack Landau.

David Kusturin, Chief Project Officer at Waterfront Toronto, tells blogTO that the arrival of the bridges represented a shift in the public perception of the project, saying, "people really began to see and understand that this is going to be a completely different place when we're all finished." 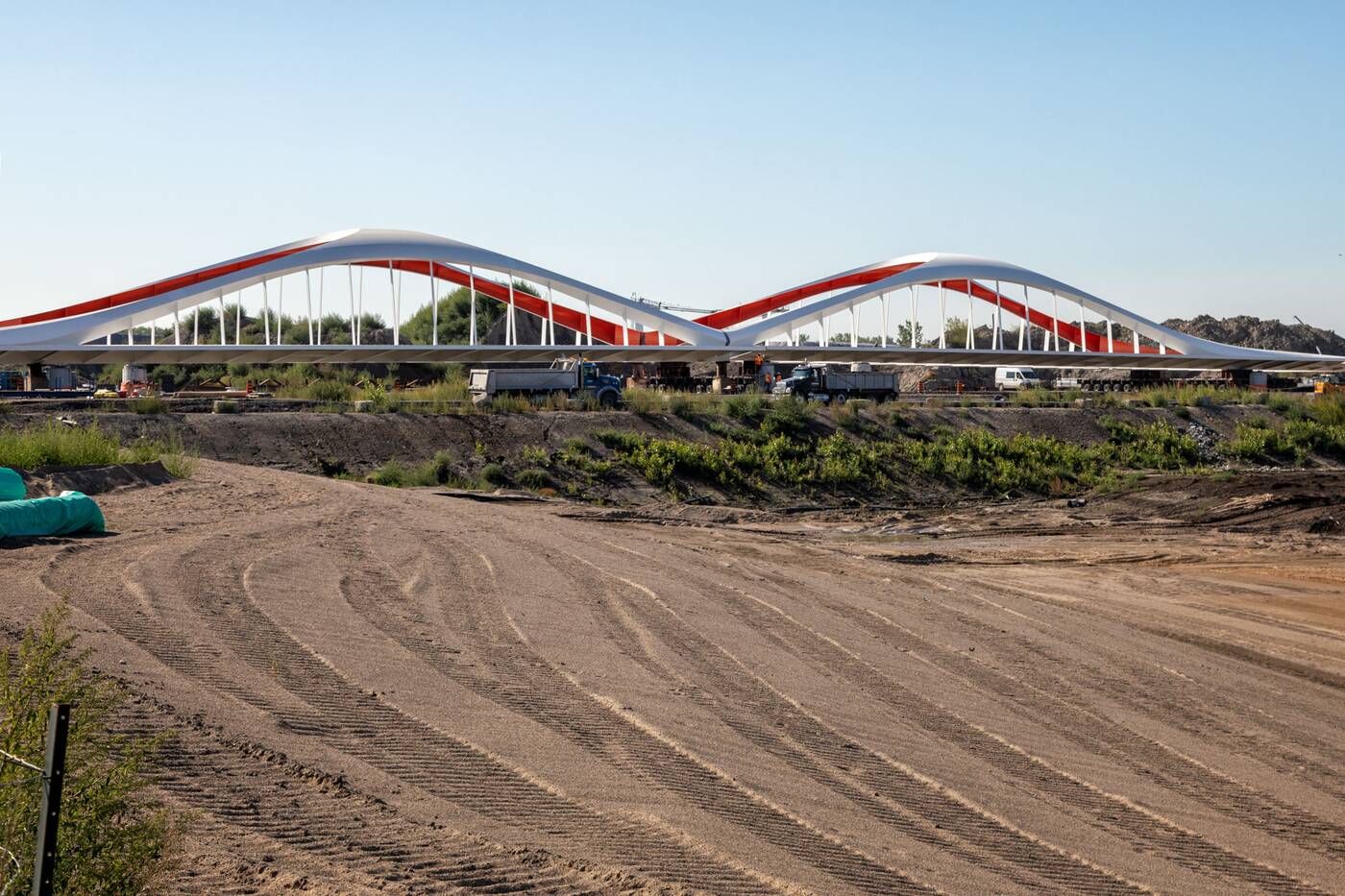 Excavation for the section of the valley between Villiers Street and the Keating Channel can only begin once Commissioners Street reopens, ensuring that there is at least one east-west route maintained through the Port Lands at all times.

"Once we have Commissioners Street reopened in the middle of next year, we can then close Villiers Street. That allows us to construct what we're calling 'the north plug,'" Kusturin says, referring to one of three "plugs" keeping the new river valley dry as digging continues. 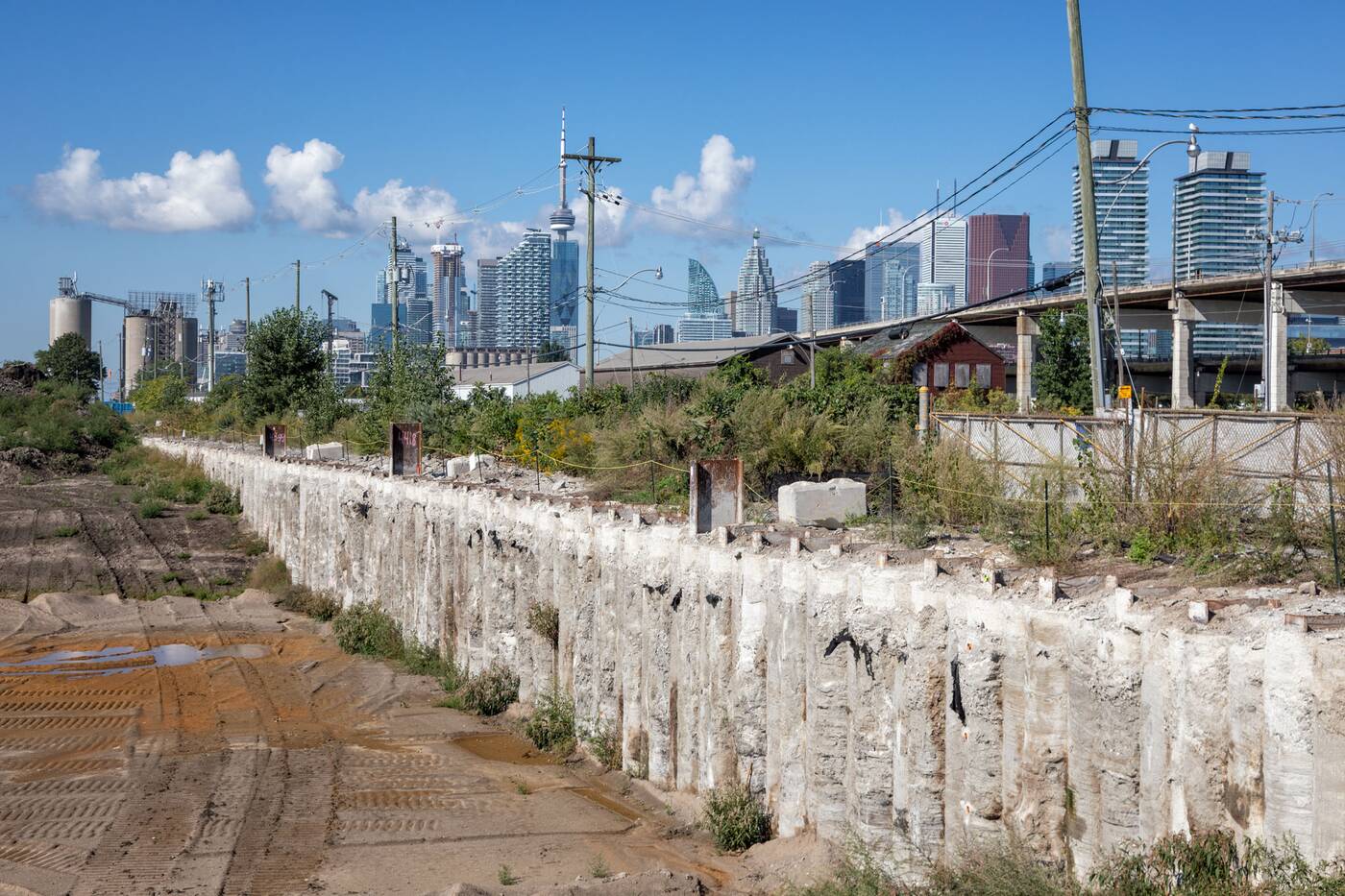 The scale of the excavation is almost beyond comprehension without some reference. The approaching 1.5 million cubic metres of soil excavated is almost enough to fill the entire SkyDome Rogers Centre, which has a volume of about 1.6 million cubic meters. 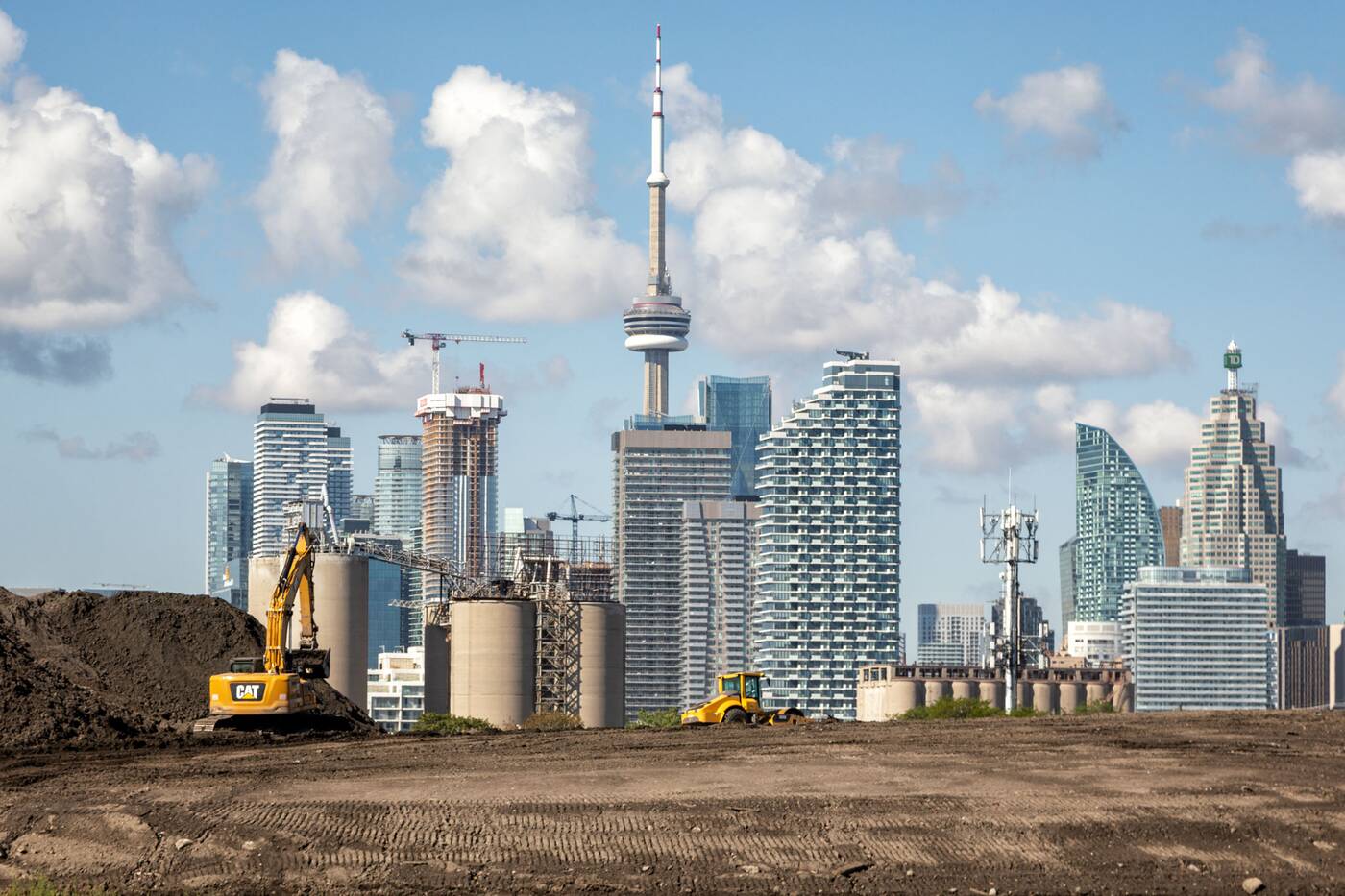 Looking west to excavators at work against a skyline view. Photo by Jack Landau.

For a bit more reference, the volume of soil excavated could fill 600 Olympic-sized swimming pools. 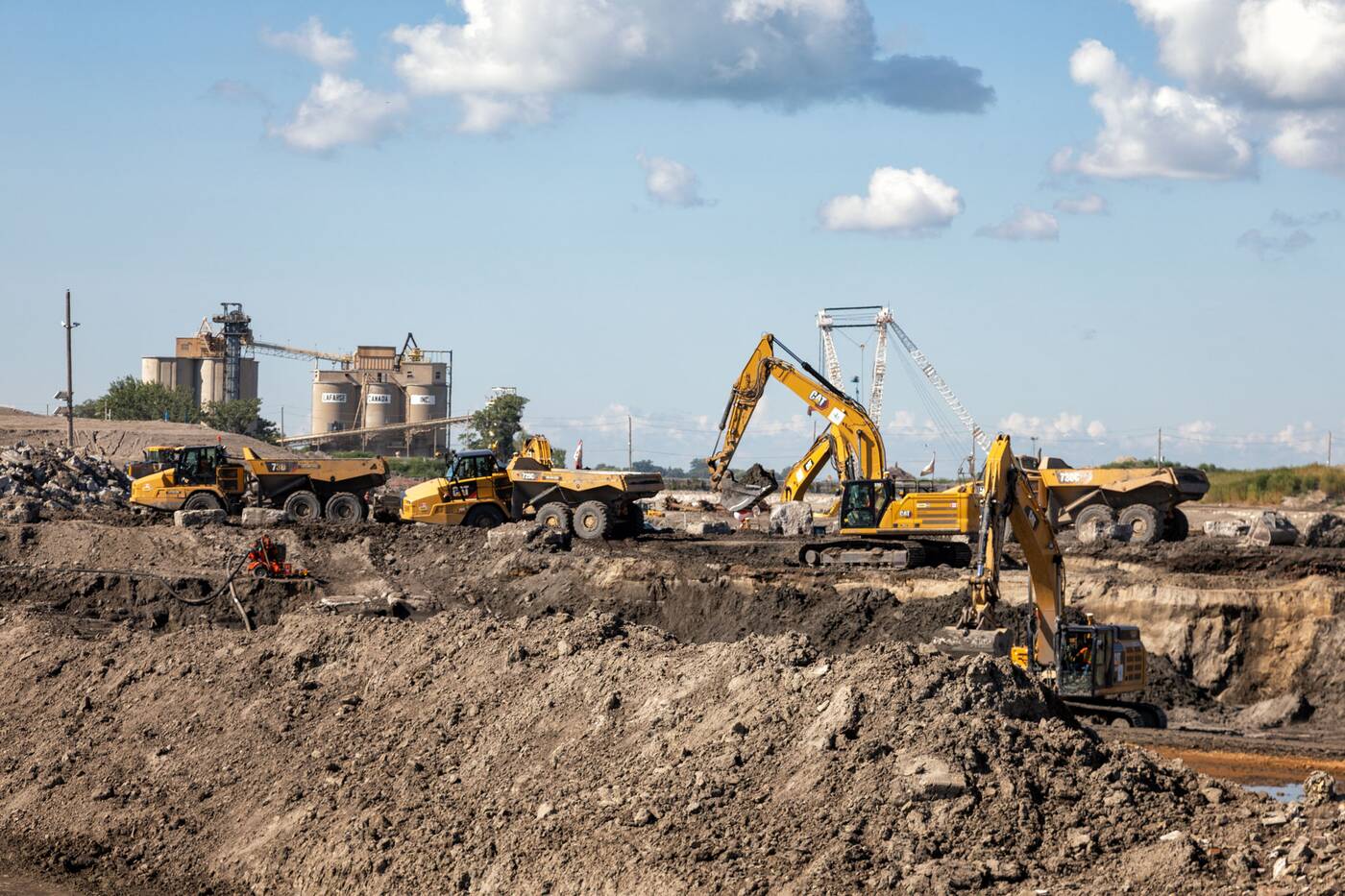 Kusturin says that the team is "trying to re-use in the order of 75 to 80 per cent of it on site. We're not just excavating a river, in order to flood protect, we're raising the grades all across the island and south of the river." 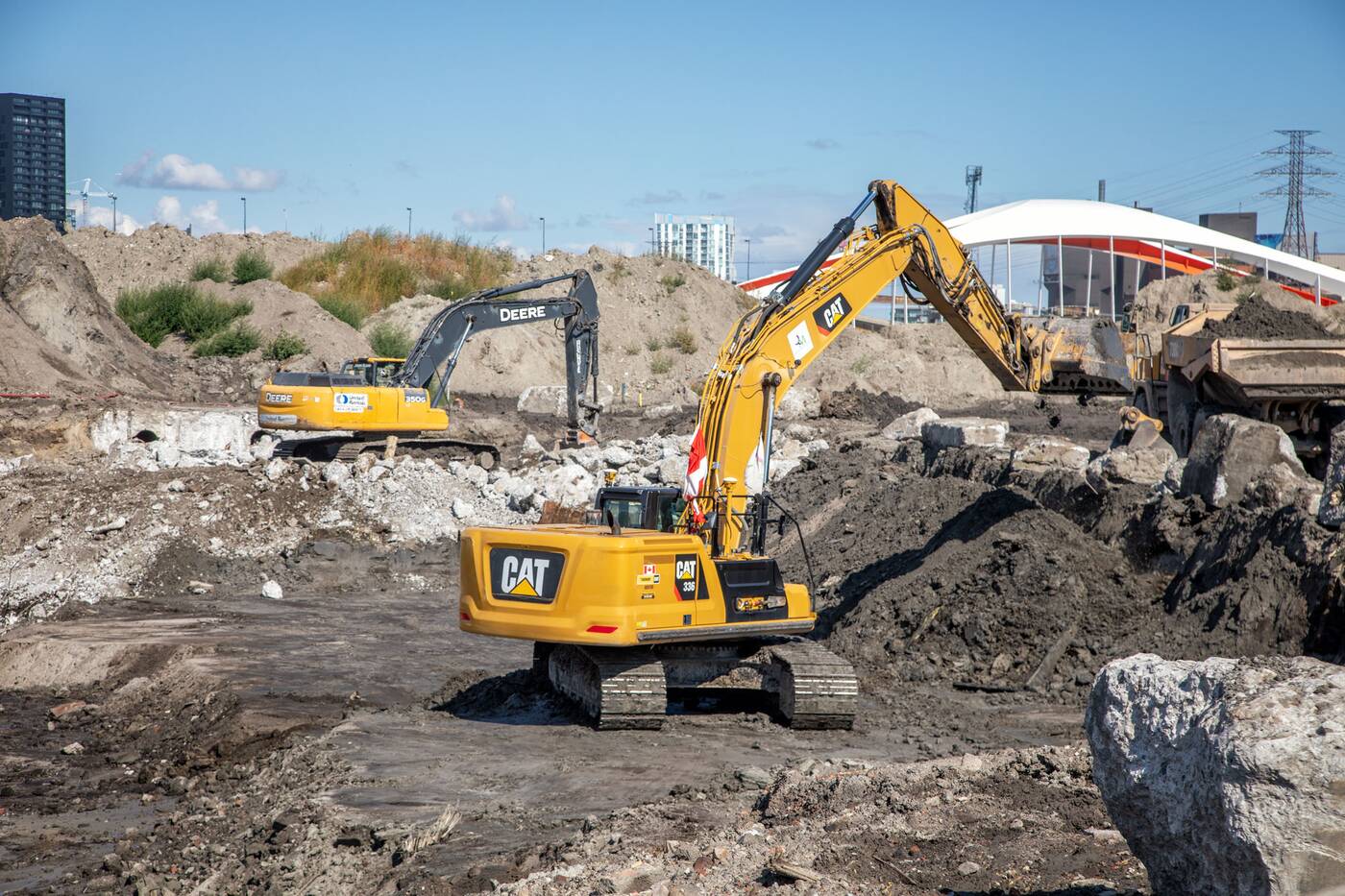 Since the area is built on contaminated lake fill, a significant part of the job is cleaning and remediation of the staggering quantities of soil being removed. 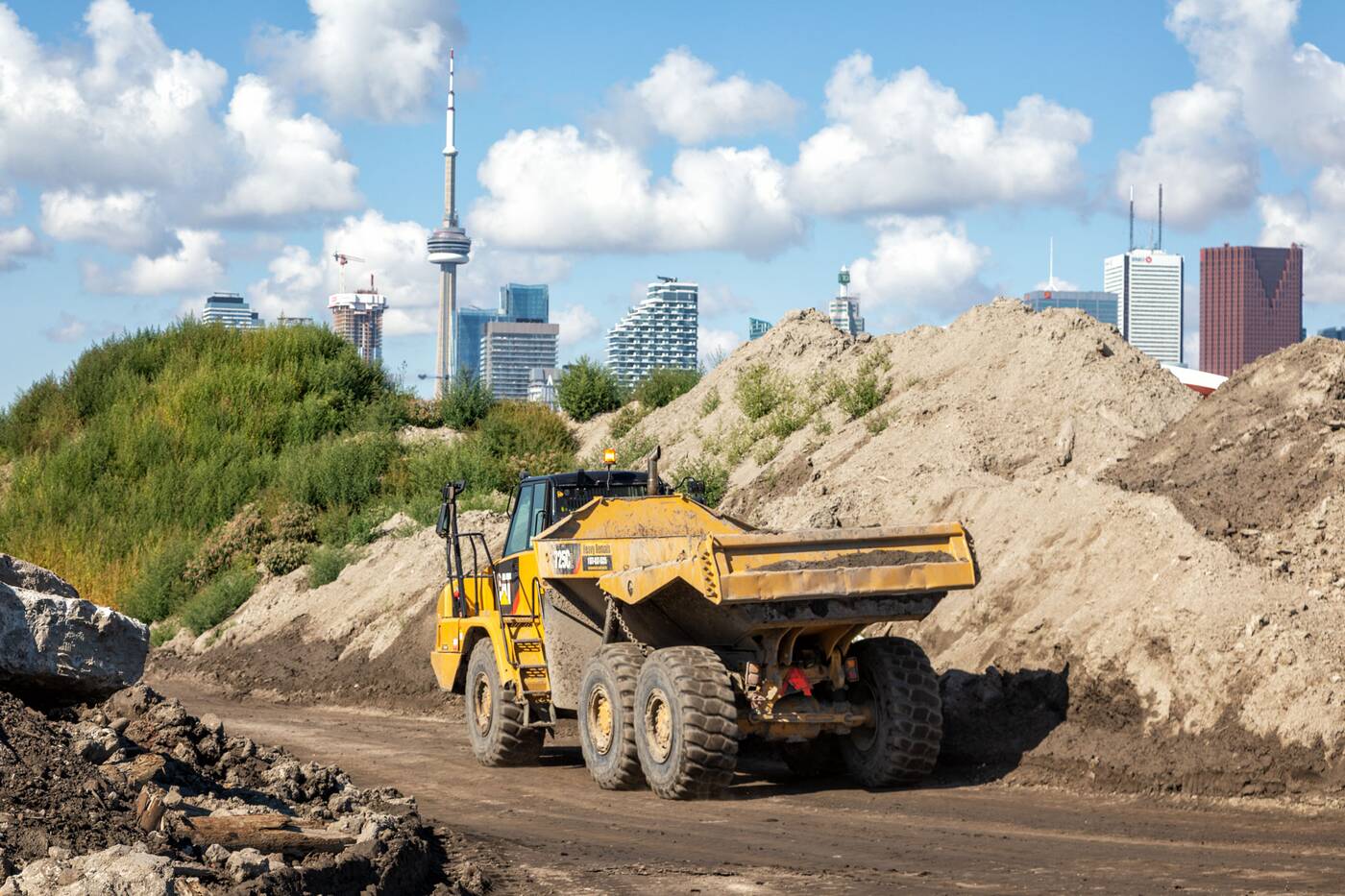 An empty truck returning to the excavation site for another load of soil. Photo by Jack Landau.

"Some of the soil can be treated so we're doing bioremediation. Soil is laid out for a period of several months and is turned regularly, with bacteria provided that consumes all of the petrochemicals and contamination. That material is actually being used to raise grades in the area." 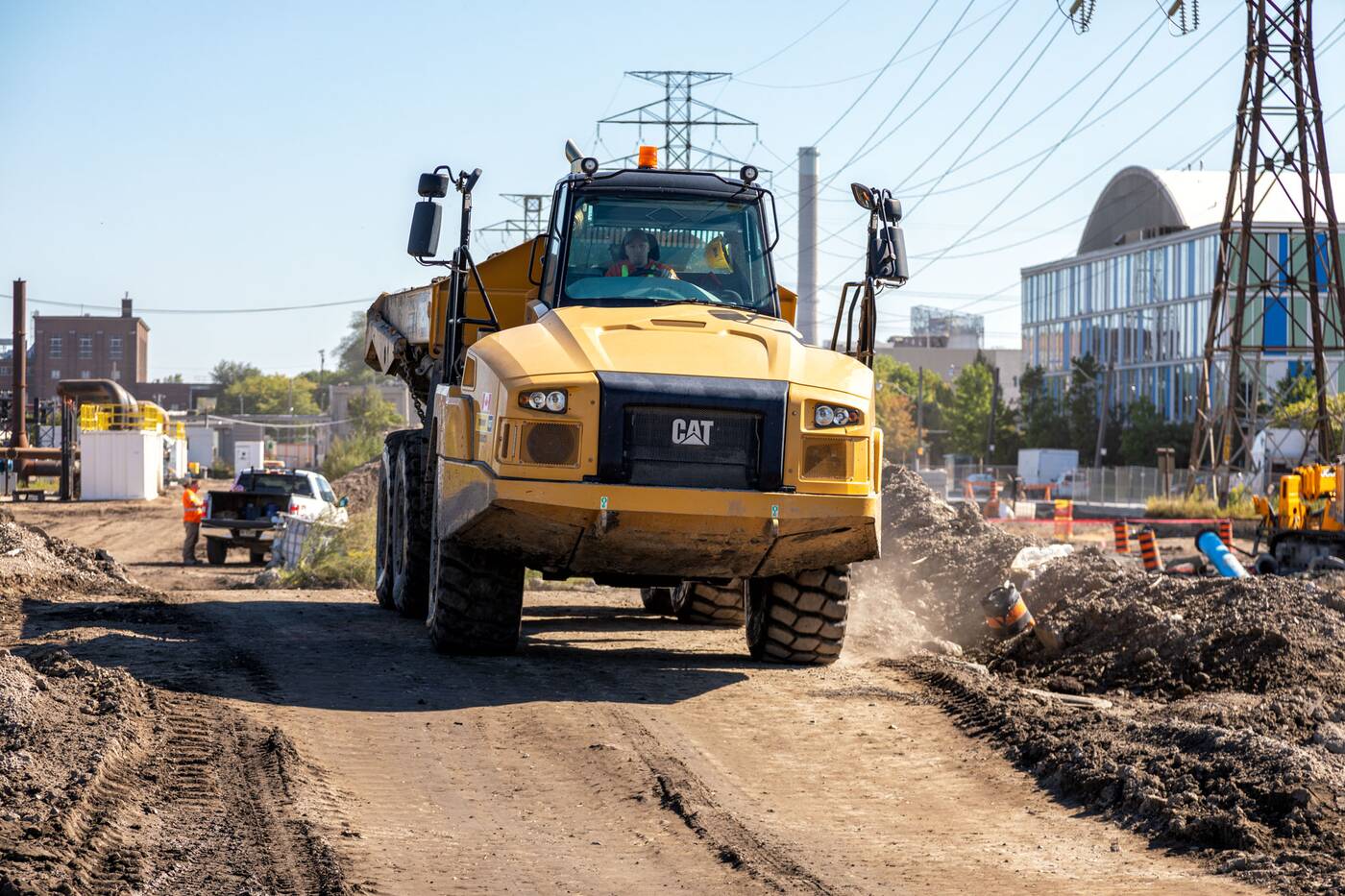 An empty truck returning to the excavation site for another load of soil. Photo by Jack Landau.

The edges of this river valley are being built up with cleaned soil and will soon come alive through the mass planting of greenery. Waterfront Toronto is projecting a whopping 5,000 trees, 77,000 shrubs, and over 2 million new herbaceous plants once the project is complete. 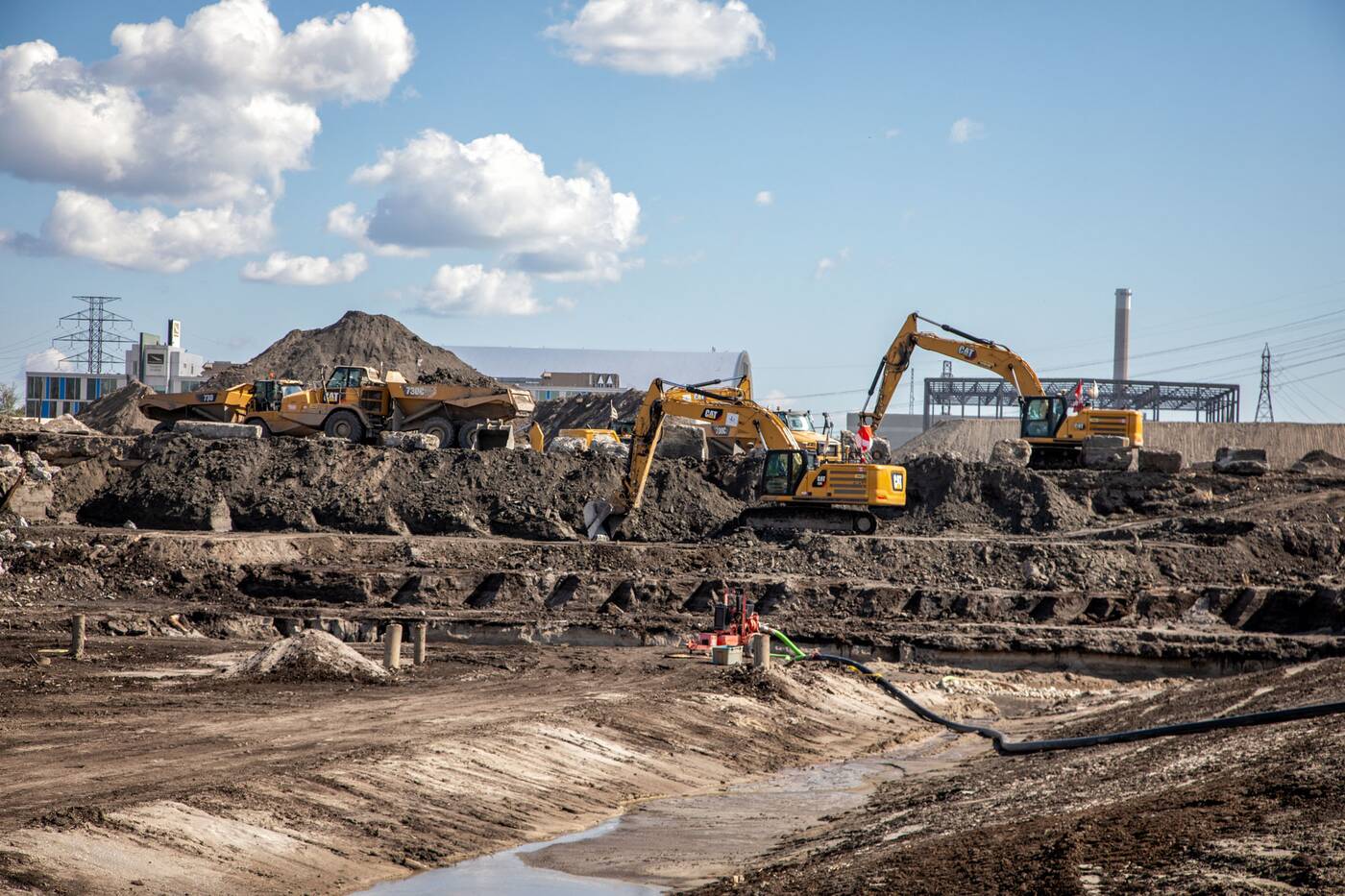 The river valley is etched out by a fleet of excavators and dump trucks working in close coordination. Photo by Jack Landau.

South of the bend in the river where the course veers west, a secondary outlet is being excavated known as the Don Greenway, a marsh fed by water from the Ship Channel further south. Inaccessible to pedestrians, this naturalized wetland habitat will double as a direct-to-lake outflow when the river surges during floods.

During extreme storm conditions, the flow of roughly two-thirds of the volume of Niagara Falls thunders down the Don. The Don Greenway will relieve the elevated valley walls of excess flow towards the lake in these situations.

Excluding the raised flood protection berms being built around it, the valley has been excavated down to a depth of five metres, allowing installation of the river "finishes" to begin. 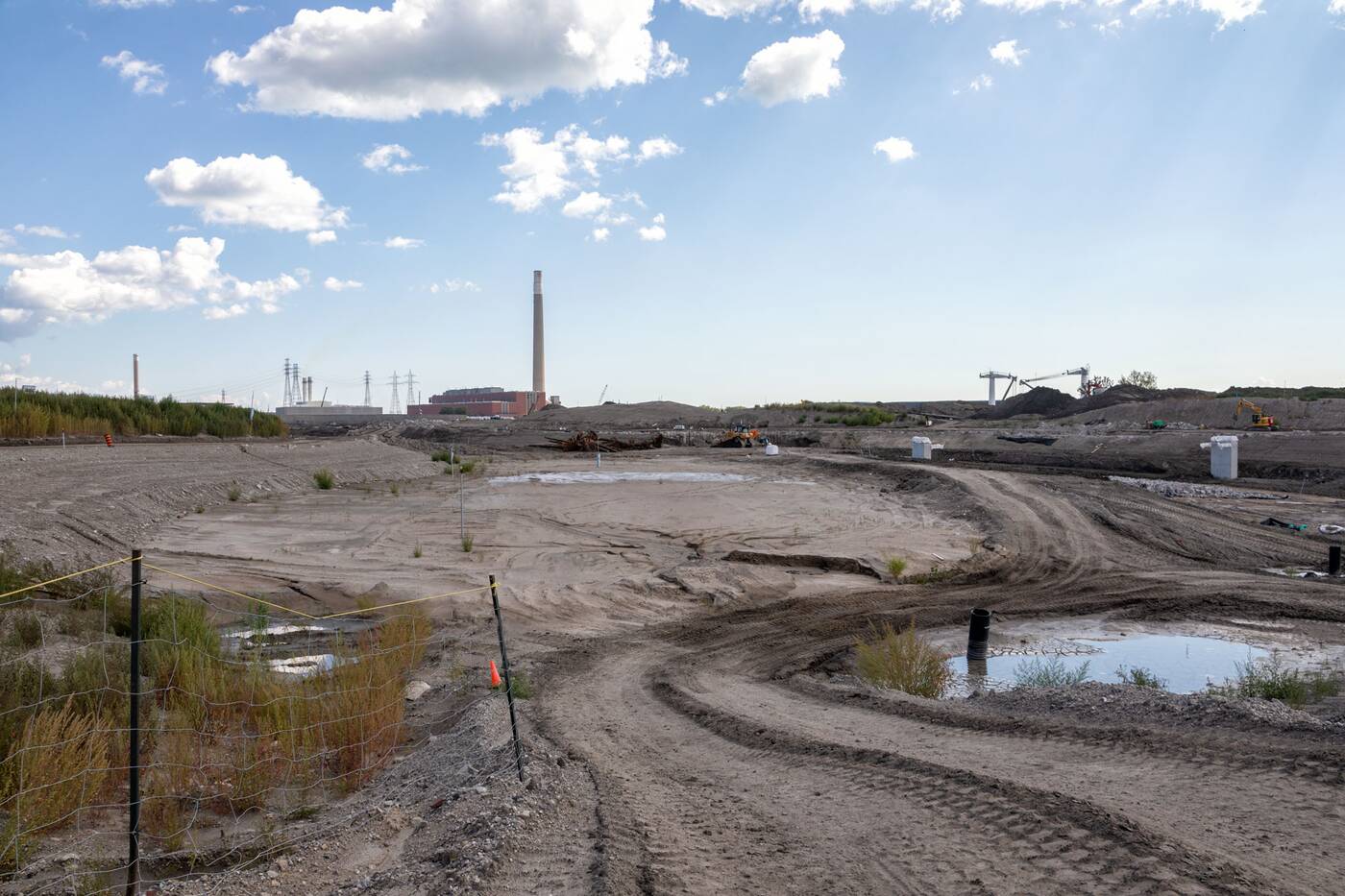 Excavated areas within the river valley are then covered with lining material, preventing any contaminated groundwater from seeping into the restored river mouth. 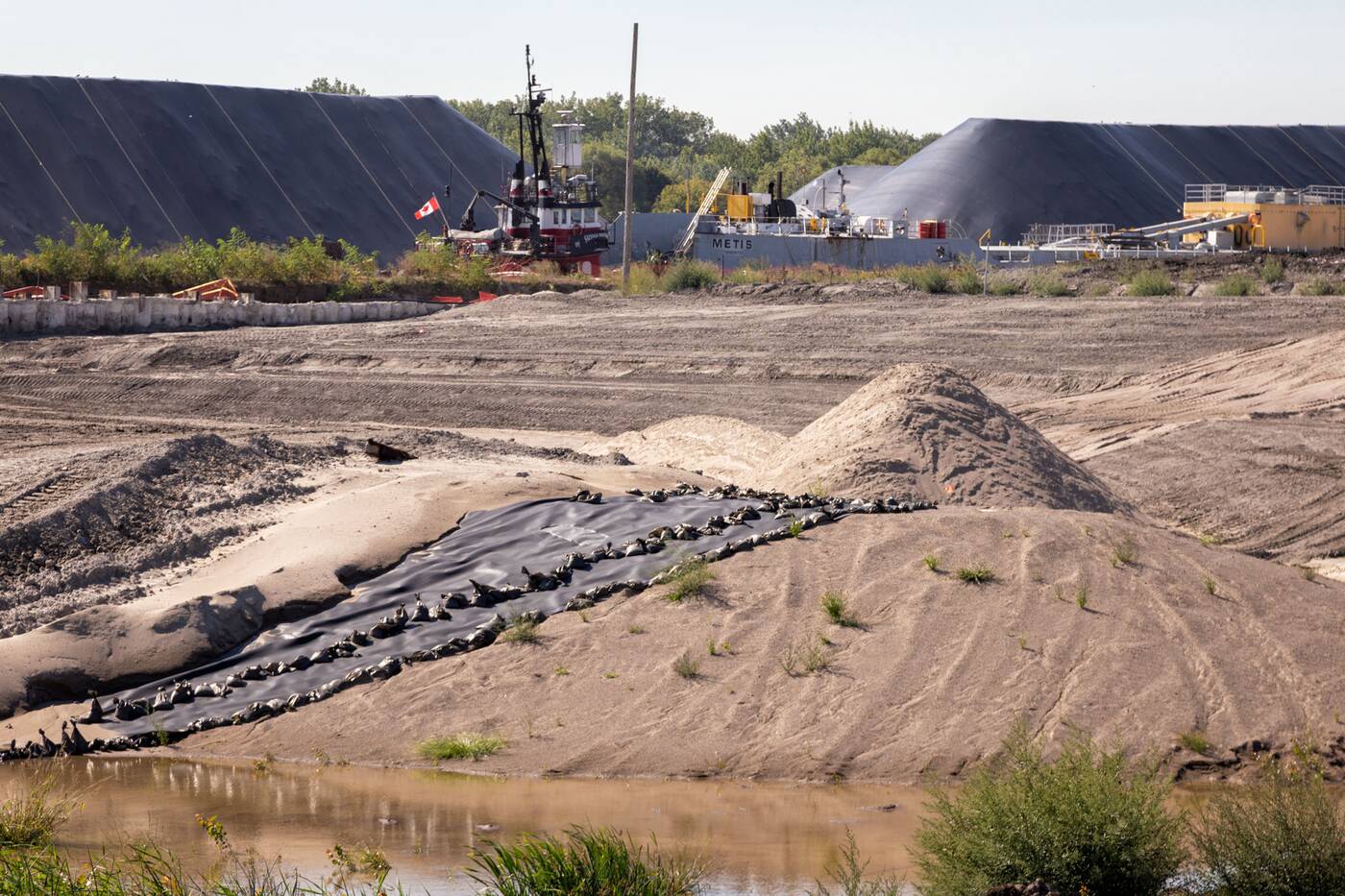 Process of lining of the base of the Don Greenway just south of the river's bend. Photo by Jack Landau.

These clay and fabric liners arrive in large rolls and are unfurled out into the valley like impermeable carpets. 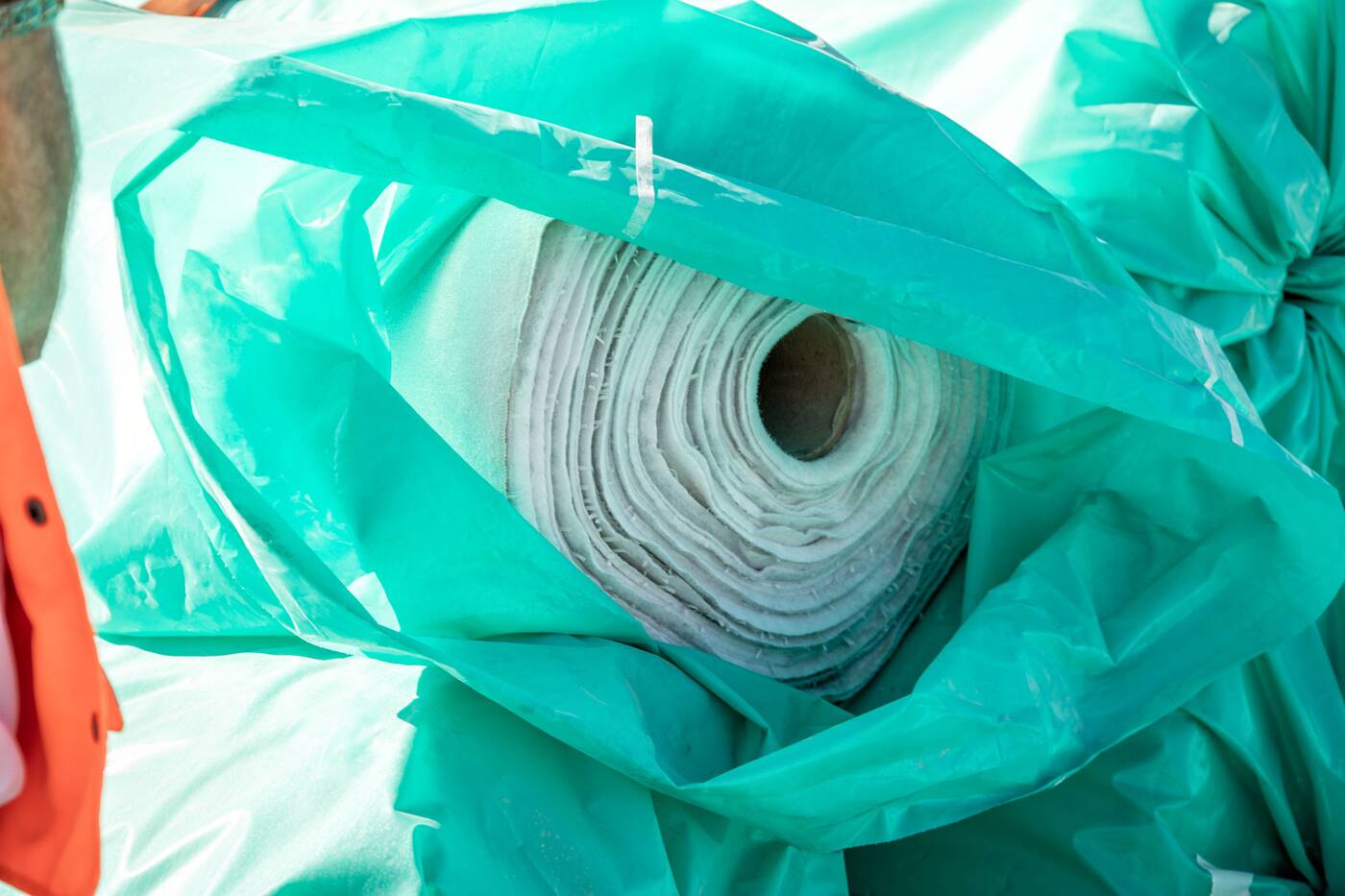 A roll of liner that will be used to form an impermeable layer between the riverbed and groundwater. Photo by Jack Landau.

The area where the river and the Don Greenway intersect is known as "The Elbow," and a stretch of the river between The Elbow and Cherry Street is where the most exciting activity is currently going down. 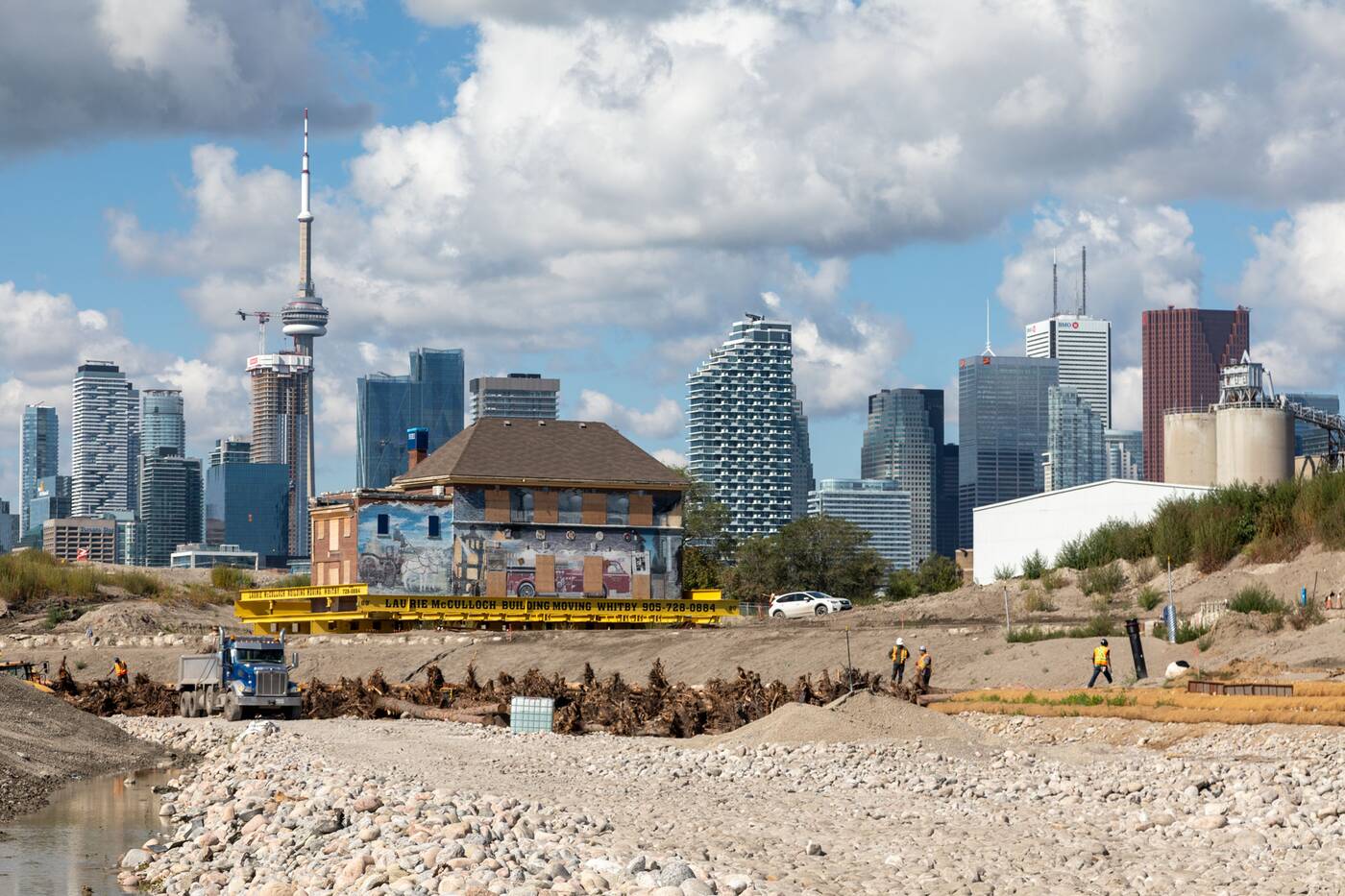 Looking west from the bottom of the riverbed, the white rocks being the final base of the river. Photo by Jack Landau.

Walking the base of this stretch of river valley provides the rare opportunity to plant your feet where a river will soon flow. The final layer of rock is now in place for the base of the river bed along this portion, as other details come into play.

Standing on the riverbed the Don River will flow through in 2024 #Toronto pic.twitter.com/tFysPpw8F9

The river banks are being protected with seven layers of tree roots, fighting erosion and creating new habitats for fish.

Many of the trees being used for this component of the river were donated from the set of Amazon Prime's The Expanse, where they were utilized as part of a forest set for the show's upcoming sixth season. 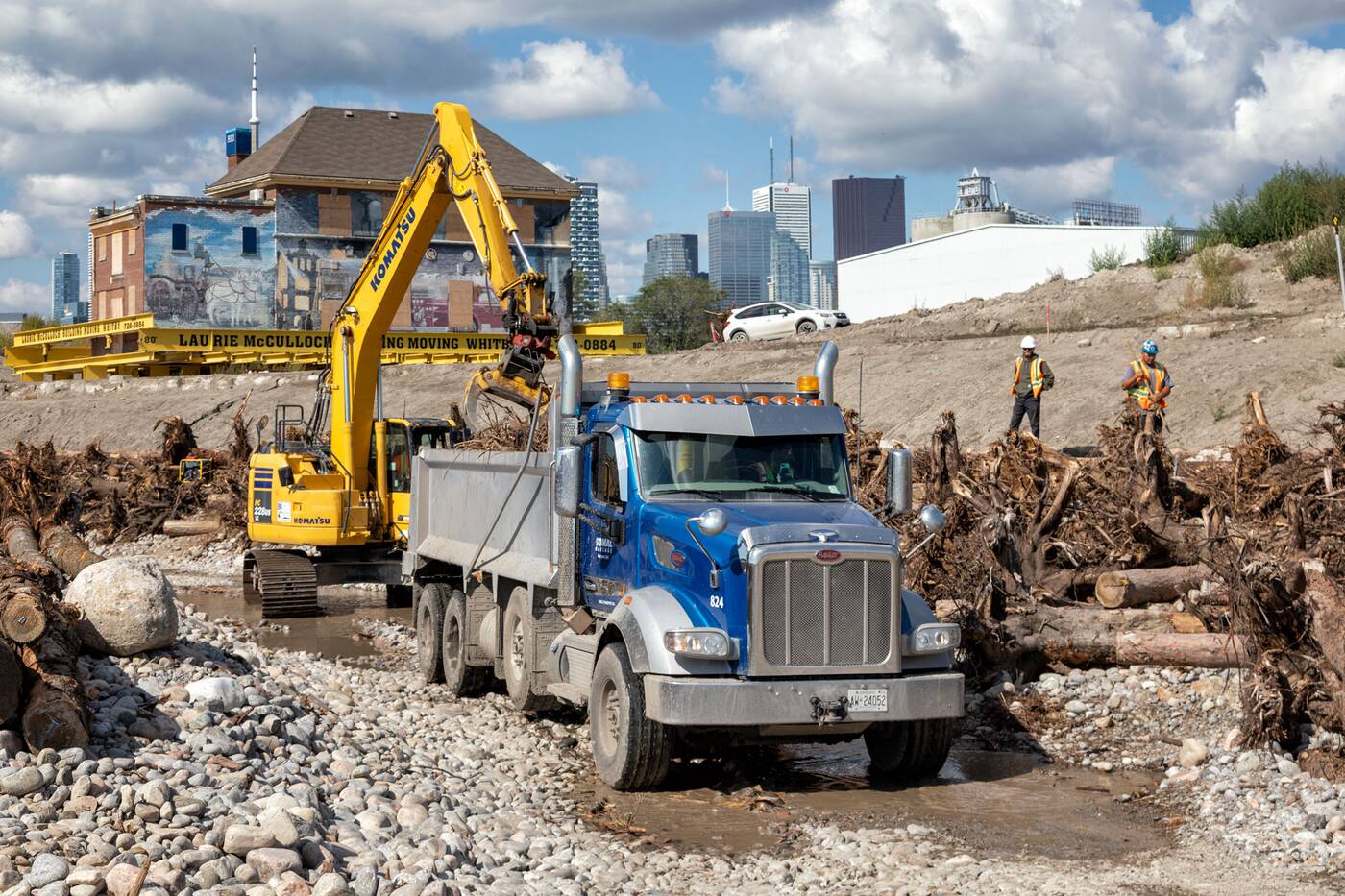 Roots and trees being offloaded to build the root layer along the riverbed. Photo by Jack Landau.

The river flows south of a recently relocated firehouse, accommodating a widening of Commissioners Street. This firehouse and the network of supports used to move it are apparent in the views above.

How did we move the Fire Hall? Carefully. Watch this time lapse and see it move 78 feet to its new home. pic.twitter.com/0Qmg5ca0q4

About halfway between the Commissioners Bridge and Cherry Street, the valley will be bisected by some new pedestrian infrastructure.

"Those bridges are actually being constructed out of roof trusses that we salvaged from the Marine Terminal 35 building that was taken down at the water's edge,” says Kusturin. "They're very interesting trusses, they actually have diamond cutouts in them, and we've had them refinished to be the bridge structures." 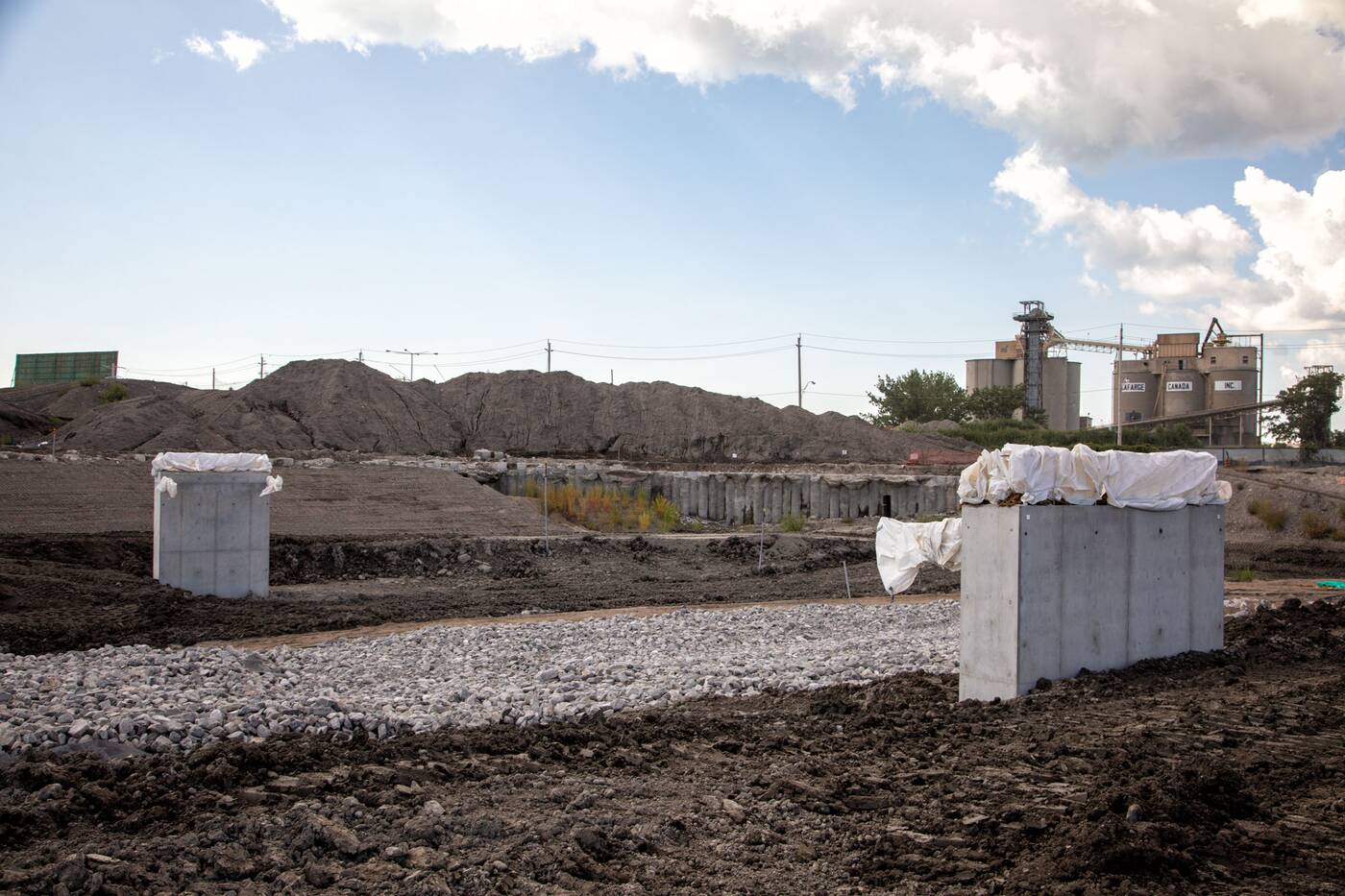 Abutments for a new pedestrian bridge that will cross the river valley. Photo by Jack Landau.

It is poetic justice to take a piece of the industrial history responsible for eliminating the Don River's original mouth and repurpose it into the river's rebirth.

Crossing over west of Cherry Street, the new river's outflow point into the Polson Slip is already coming together, with large armour stones marking the point where water will enter the excavation after the west "plug" is broken. 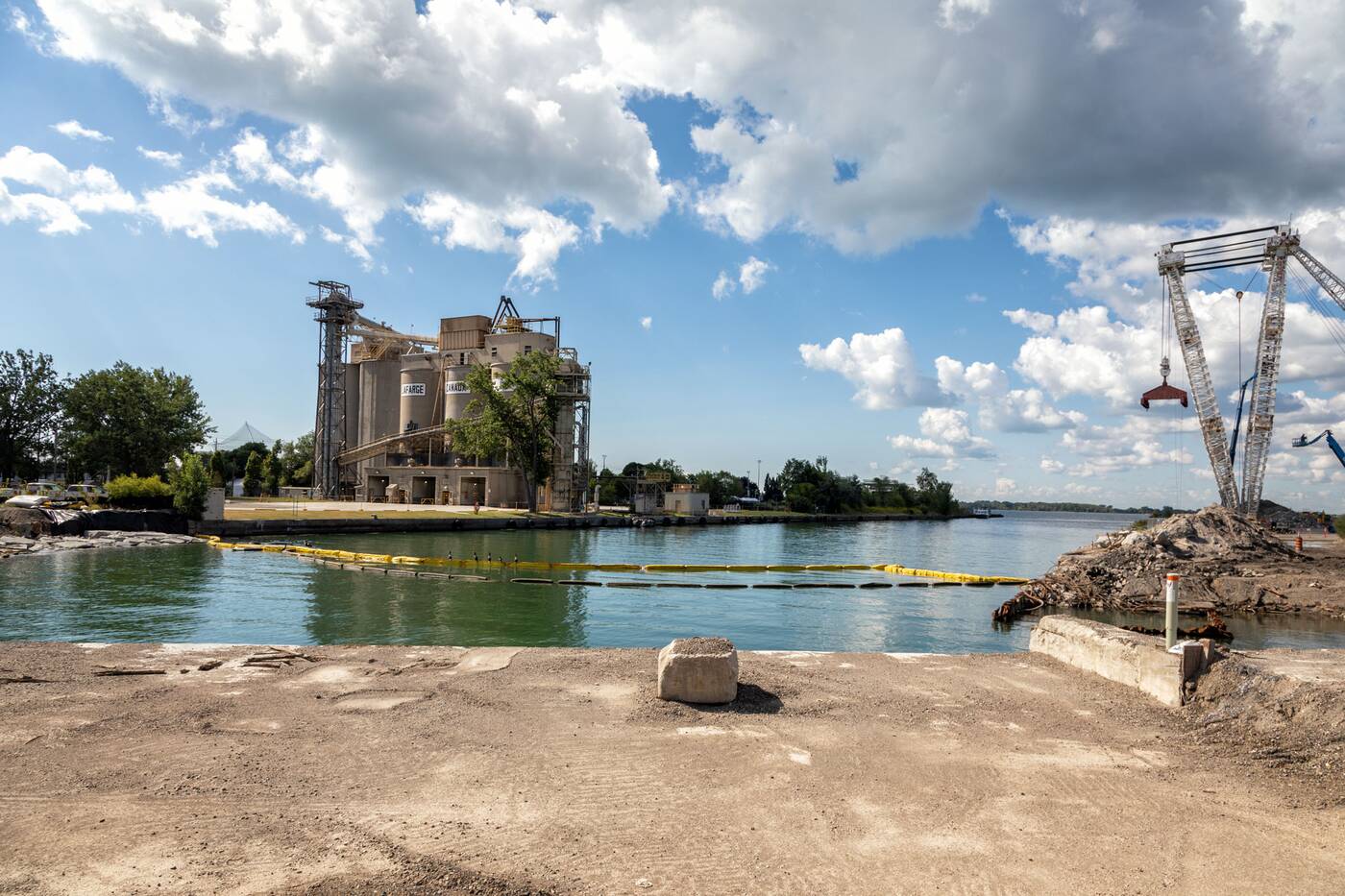 Looking west into the Polson Slip, where the river will flow into Lake Ontario. Photo by Jack Landau.

The north edge of the Polson Slip's dock wall is being naturalized and reinforced, which will help it withstand the flows of the river during storms and give wildlife even more waterfront real estate to make their home. Naturalization will begin with excavation this fall.

Bridge abutments show the location where the realigned Cherry Street will span the river mouth with a bridge matching the Cherry Street South and Commissioners Street bridges. 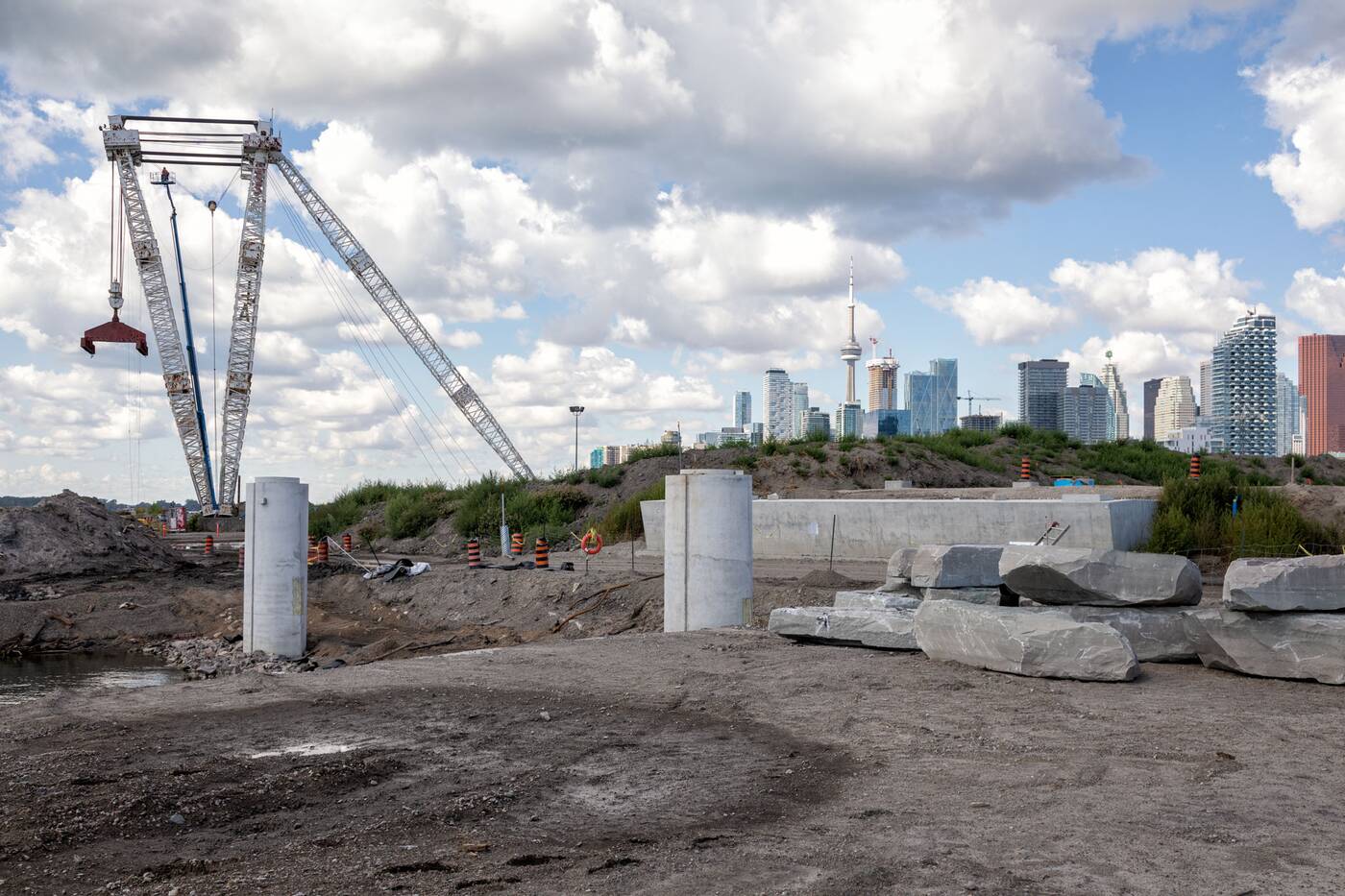 Abutments have been placed for the new Cherry Street South bridge, which will match the designs seen for the Cherry Street North and Commissioners bridges. Photo by Jack Landau.

This realignment is moving Cherry Street about 50 metres to the west of its current position for the stretch from Lake Shore to Commissioners Street. The road angles back across the river mouth to rejoin its current alignment at Polson Street to the south.

The new Cherry Street is designed to be much more inviting, with generous sidewalks, an extension of the Martin Goodman Trail, and a dedicated transit lane.

Once the dry riverbed's features are all in place, the western plug will be the first to be pulled, allowing the excavated river valley to fill in with water from Lake Ontario.

"We are keeping the river and lake out of the excavation so we can do all the work you see going on here because obviously, it's easier to do dry. Once all of that work in the river valley is done, then we will open up the west plug and let the lake fill in. The reason for doing that is we need the plants to establish before we bring any flow into the river," says Kusturin.

"The last thing we do at the end of 2023 is open up this north plug, and the river will start to flow."

Though the concrete channel will still intersect with the new river course at a right angle, water will always take the path of least resistance downstream.