Toronto musician Emma Trousdale had plans to start up a tiny cabin business for a while, but during the pandemic, she says she was "presented with a set of circumstances that made this big decision kind of easy."

"It was never part of the plan to actually move our family away from the city," Trousdale tells blogTO. "But when COVID hit, it was all of a sudden an option for us and we just made this crazy decision to sell our house and move to Huntsville."

Trousdale and her husband Andrew are starting up Foret Cabins on a 60-acre property outside Baysville in Lake of Bays. They originally saw the property in 2018 after two years of searching, and since then have been working with a planner to rezone the property to allow them to build 11 tiny off-grid cabins in the woods. 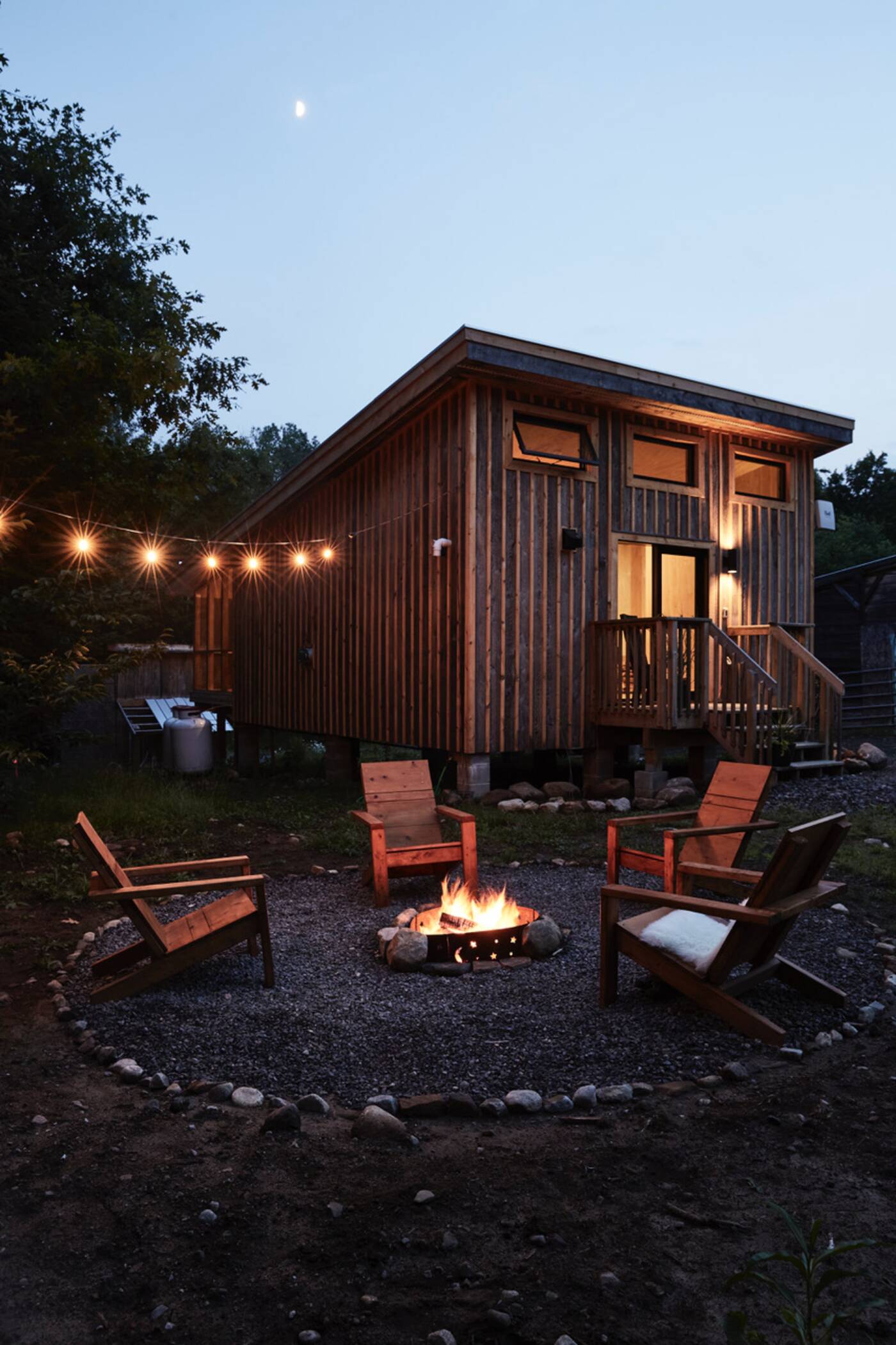 The exterior of the renovated hunt cabin. Photo by Naomi Finlay.

While they work out the complexities of solar power and composting toilets ("one of the things that the Township doesn't see eye to eye with us on," according to Trousdale) they've renovated the existing hunt cabin on the property and are starting to rent it out.

Their goal is not only to create a completely sustainable oasis where city people like they used to be can come and unplug, but also to improve their overall quality of life.

Trousdale and her husband's story is one of globetrotting and big cities: Emma is a singer/songwriter originally from Toronto, and Andrew is a director of finance in telecommunications originally from Sydney, Australia. They met backpacking in Thailand 20 years ago, reconnecting and marrying in 2010.

Andrew lived in London, England at the time, and the relationship was long distance for a time with Emma touring for a few months then living in London for a few months. Eventually they settled in Dufferin Grove in Toronto and had two daughters.

Not everything was rosy, though. Their lives were busy, with Andrew constantly commuting and Emma suffering a head injury from a falling tree branch in 2013 when her first daughter was a year and a half old, resulting in post concussive syndrome.

"Things that I had enjoyed previously became difficult and it really changed my relationship with the city," says Trousdale.

"Restaurants, grocery stores, shopping, museums, parks, traffic, it was like the concussion removed the filter that stops your brain from being overloaded with stimuli, and everything became really challenging. I remember fantasizing about running away to a cabin in the woods." 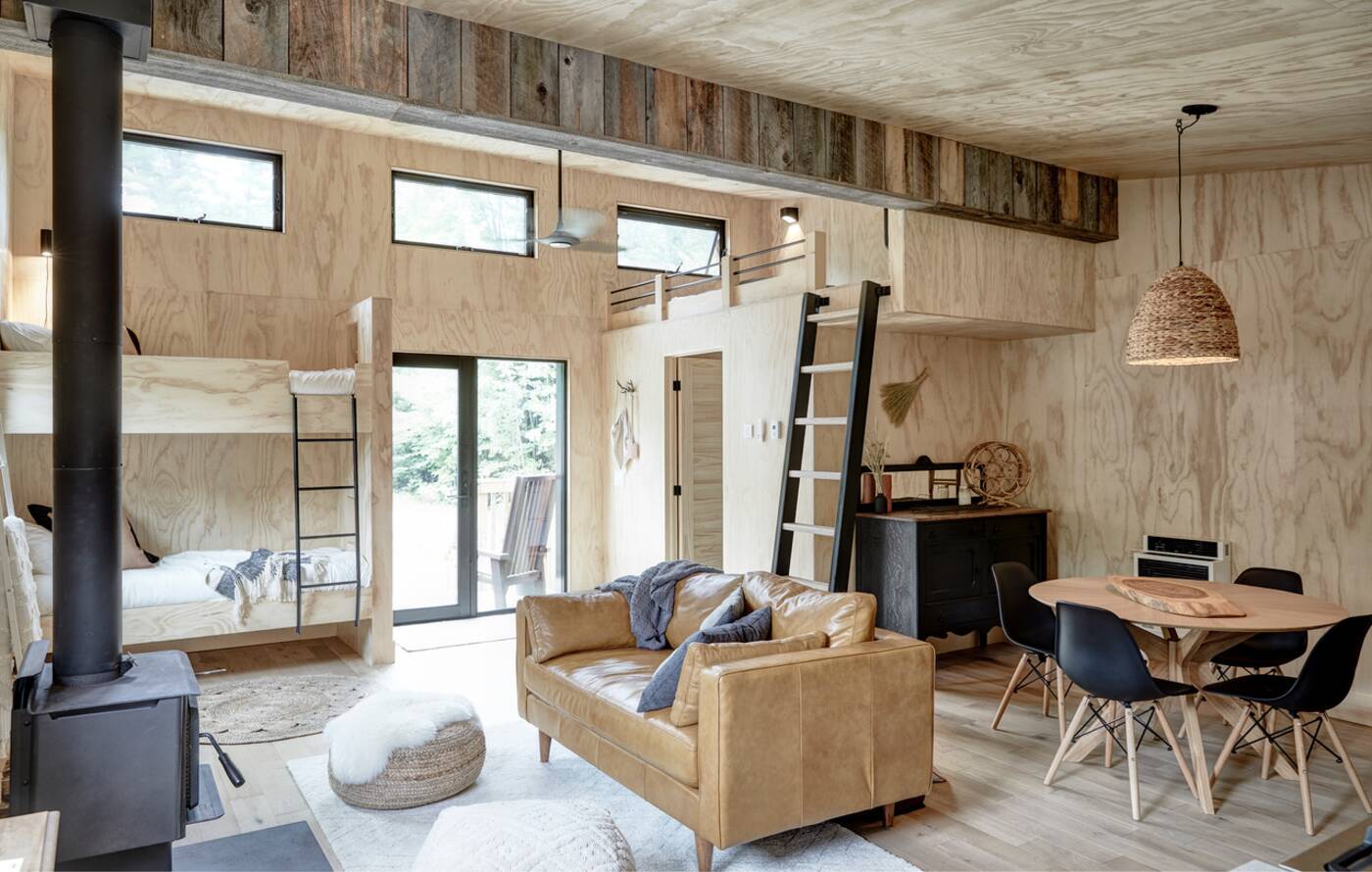 What the renovated hunt cabin now looks like on the inside. Photo by Naomi Finlay.

That's when she first came up with the idea for Foret Cabins and presented it to Andrew.

"He actually thought it was a good idea and started getting his spreadsheets out," says Trousdale. "Whenever that happens, I know he's hooked."

It was viewing the property with its wetland, stream and huge granite rock perfect for sitting and letting the world melt away that really made them "decide to pull the trigger on pursuing this seriously."

Their place in Huntsville is just 20 minutes away, and they're now living the city getaway lifestyle full time.

"Life in Huntsville is the same in a lot of ways. We still have two little kids and all the work that comes along with that doesn't just disappear. However, we now live on a lake surrounded by nature," says Trousdale.

"Since moving here we go swimming almost everyday. I take our one-year-old puppy Maple on forest hikes instead of crowded city dog parks. The kids are attending an outdoor school where they are hiking up mountains and breathing fresh air all day. Overall our mental health has drastically improved." 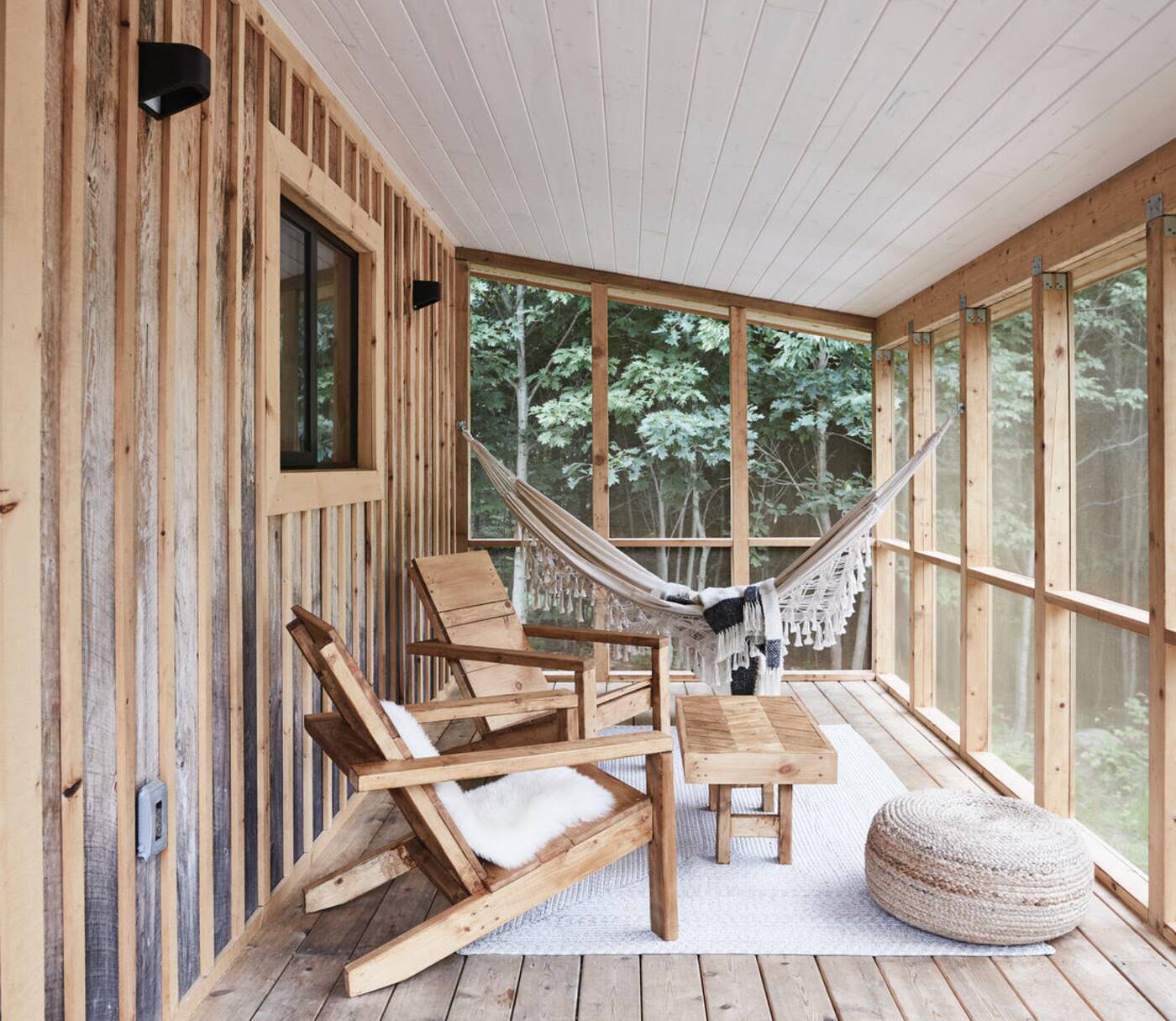 The porch area of the hunt cabin. Photo by Naomi Finlay.

She says though there are things they miss about the city, it's the lifestyle their family needs more right now and concerns about "finding their people" or having to sacrifice city culture have disappeared.

"Because its a cottage town, there are great coffee shops, restaurants, fancy gelato, there's a zero waste store and tons of artisans and a thriving music community," says Trousdale.

"As such, we don’t feel like we are having to give up culture by living here, which helps. Its just a smaller scale, and easier to manage."

With that, Trousdale is jumping into Foret Cabins with both feet, and hopes that by sharing her slice of nature with city folk she'll not only offer a chance to unwind, but also make the need for sustainability and local travel more tangible.

They're working with local companies to provide food baskets for getaways, and have plans to create a fellowship program where musicians can come and stay for a free mid-week night.

"We are really eager to get going and hopefully now that we are living closer we can move things along a little faster," says Trousdale. 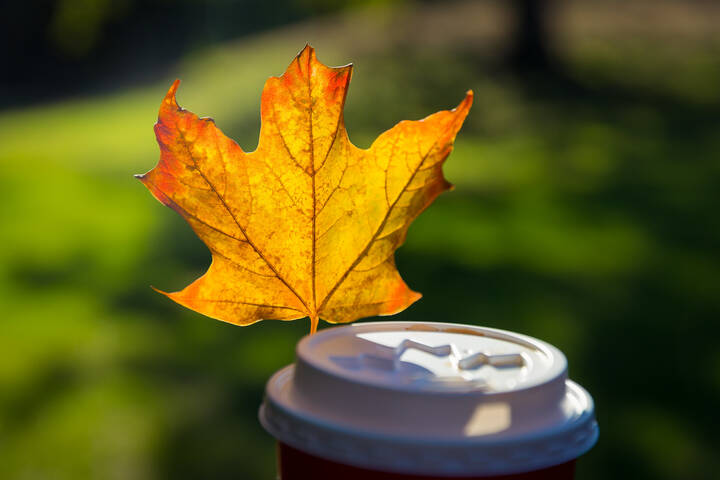