Cyclists in Toronto — of which there are now more than perhaps ever before — are taking issue with one of the city's small businesses over a blocked post and ring bicycle rack that has been misinterpreted as some sort of message for those who travel by bike.

French Bistro Le Baratin, like all restaurants across the province, were thrilled to be able to reopen their outdoor patio and welcome patrons on it once more earlier this month.

The curbside space is part of the CafeTO program that has meant less red tape for outdoor dining spaces amid the pandemic, and thus more vibrancy on the city's streets.

For some establishments, expanding patios has been a pretty straightforward process, but others have had to work around tricky infrastructure and locational challenges.

Along Le Baratin's Dundas West frontage, for example, there resides some of the aforementioned City-issued metal rings for cyclist parking, which, when outfitted with bikes, become an eyesore and also (more importantly) obstruct the flow of meal service.

So, the restaurant installed a wooden box around one of the posts, rendering in unusable — something that stoked some tempers in the city's cycling community.

"So ....bars against bike parking?" one resident posted in the Cycling in Toronto Facebook group along with a photo of the blocked-off post.

"I'd take a hammer to that box if this was my street," one member responded while others questioned the legality of tampering with City property.

"Could be an incoming patio," another aptly noted. 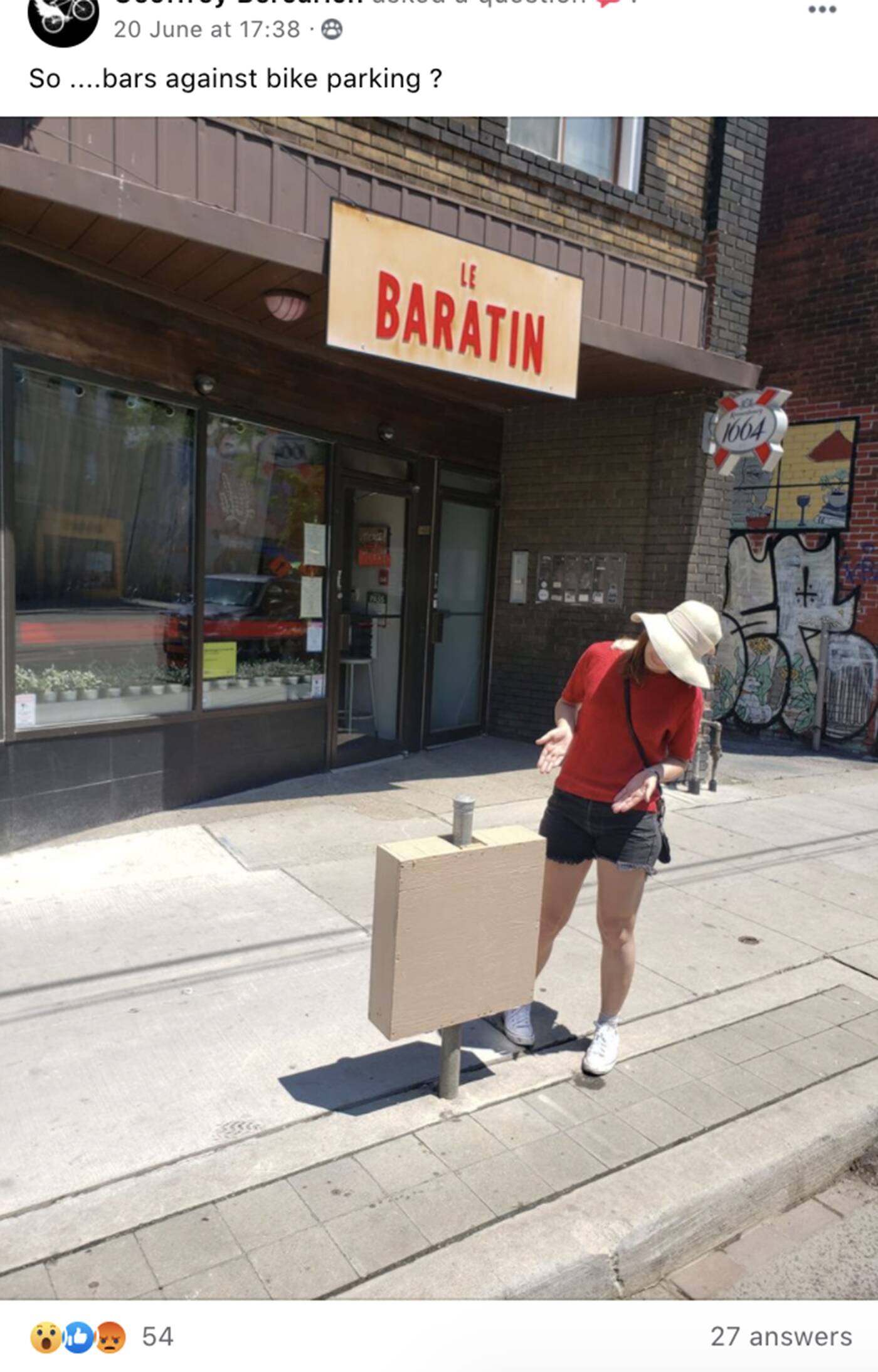 But not all had the same latter thought or seemed to care that the business was just trying to prepare its patio space to be the best and safest it can be for patrons.

Most commenters seemed to take it as an affront.

"Nobody came to complain to us so we had no idea," Le Baratin Assistant General Manager Lolo Cocow told blogTO, pointing out that there are other available bike rings within mere feet of the one in question.

She added that herself and many other staffers cycle as their primary mode of transportation, including to and from work, and so they meant nothing by the move — they were simply just trying to prevent an impediment to service.

"Unfortunately we had no other choice for service, it's literally in our way and it's already hard to navigate with people biking on the side walk, pedestrians, scooters... servers have injured themselves many times on it and the parked bikes make it even more difficult than it already is."

Cocow also says she feels saddened by the anger the small act has caused, even if it was only among a select few.

"We have struggled due to the pandemic and are just trying to get the best of the patio that was provided by the City in order to ensure our staff employment."

Hopefully those who perceived the restaurant to somehow be boycotting cyclists will be able to understand where management is coming from in this case, and not boycott Le Baratin in return.