The Church of the Holy Trinity, located in Trinity Square in downtown Toronto, is on the west side of the busy Eaton Centre.

It was referred to as Macaulay's Fields.

In those years, Louisa Street, to the south of the church, was called Jeremy Street — named after a member of the Macaulay family. 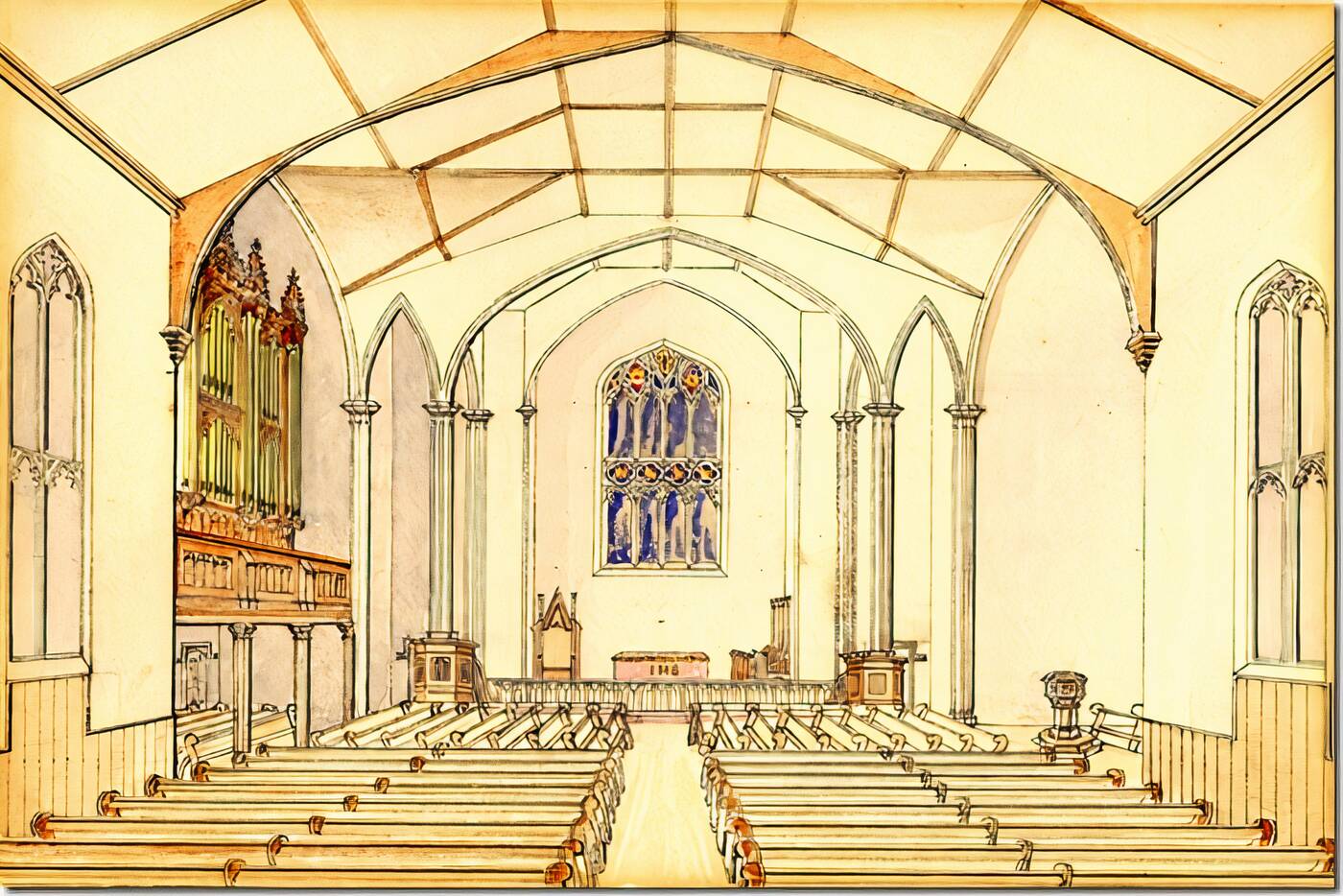 Sketch of the interior of Holy Trinity in 1850. Photo from Toronto Public Library.

The history of the Church of the Holy Trinity began when Bishop John Strachan, who is today buried in St. James Cathedral on King Street East, received a donation of 5,000 pounds sterling to build and maintain a church in Toronto.

Conditions were attached to the funds. It was to be named the Church of the Holy Trinity, the pews were to be forever free and the pews were not to be designated to a specific person.

The terms also stipulated that 3,000 pounds were to be spent on the building and 2,000 pounds on investments.

In 1898, it was revealed that the donor was Mary Lambert Swale of Settle in Yorkshire. It was said that she donated the money after visiting Toronto and being dismayed by St. James Cathedral's exclusive pew-holding system. 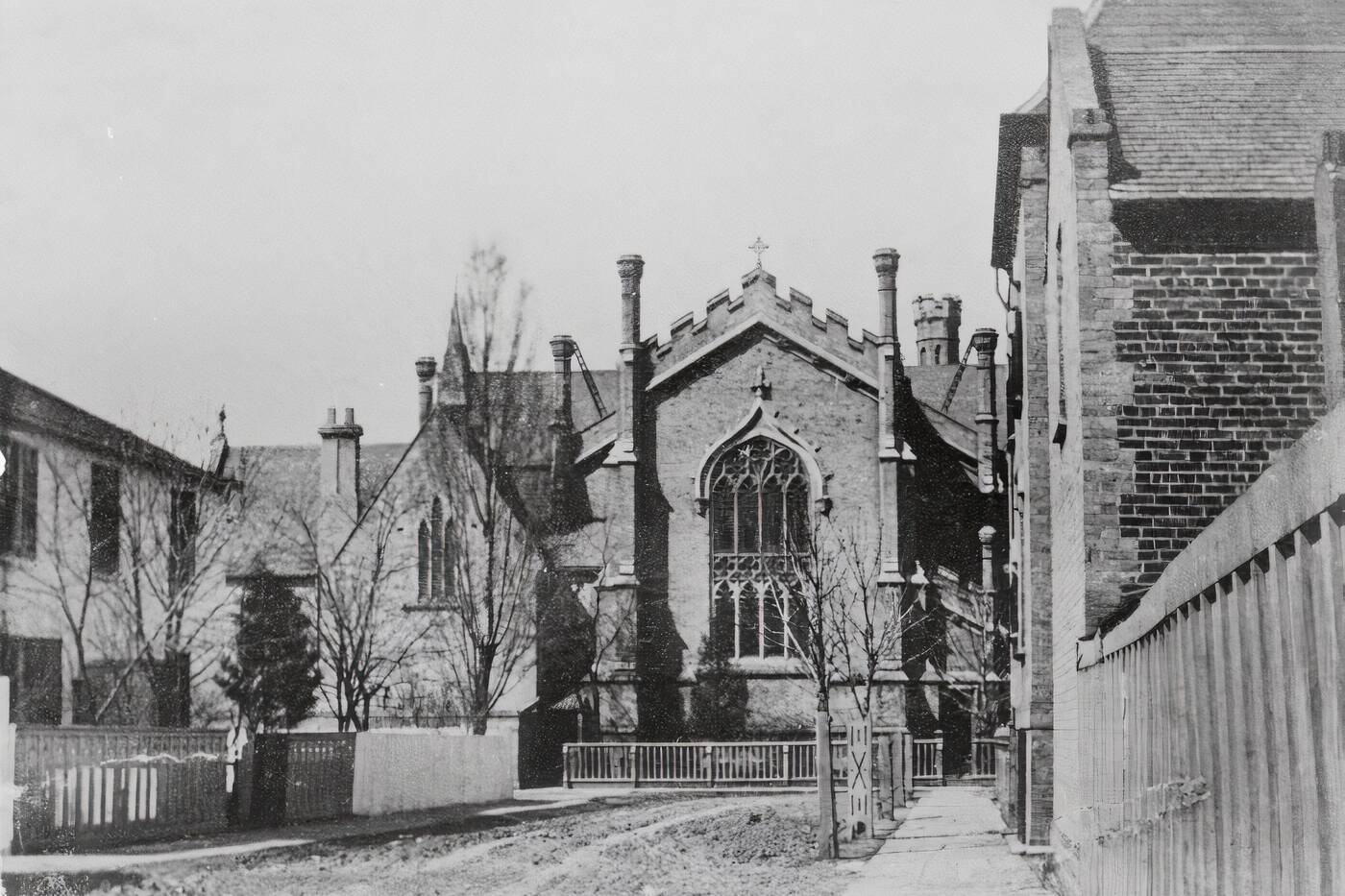 The camera is pointed west from near Yonge Street, in 1875. The street was formerly the carriageway that connected Macaulay's house (Teraulay) with Yonge. Church of the Holy Trinity is in Trinity Square, and on the right-hand side of the photo is the parsonage, residence of the minister of the church. Photo from Toronto Public Library.

On her return to England, she arranged for the money to be sent to build the Church of the Holy Trinity. During the years ahead, Swale continued to support the church.

The following is a quote is from Eric Arthur's book, Toronto, No mean City.

She provided silver sacramental plate for public use and smaller service for private ministrations, a large supply of fair linen, a covering of Genoa velvet for the altar and surplice for the clergy.

Bishop Strachan hired Henry Bowyer Lane as the architect of Holy Trinity. He had designed a section of Osgoode Hall, as well as Little Trinity Church on King Street East.

Lane had been a pupil of Sir Charles Barry, the designer of the Houses of Parliament at Westminster. 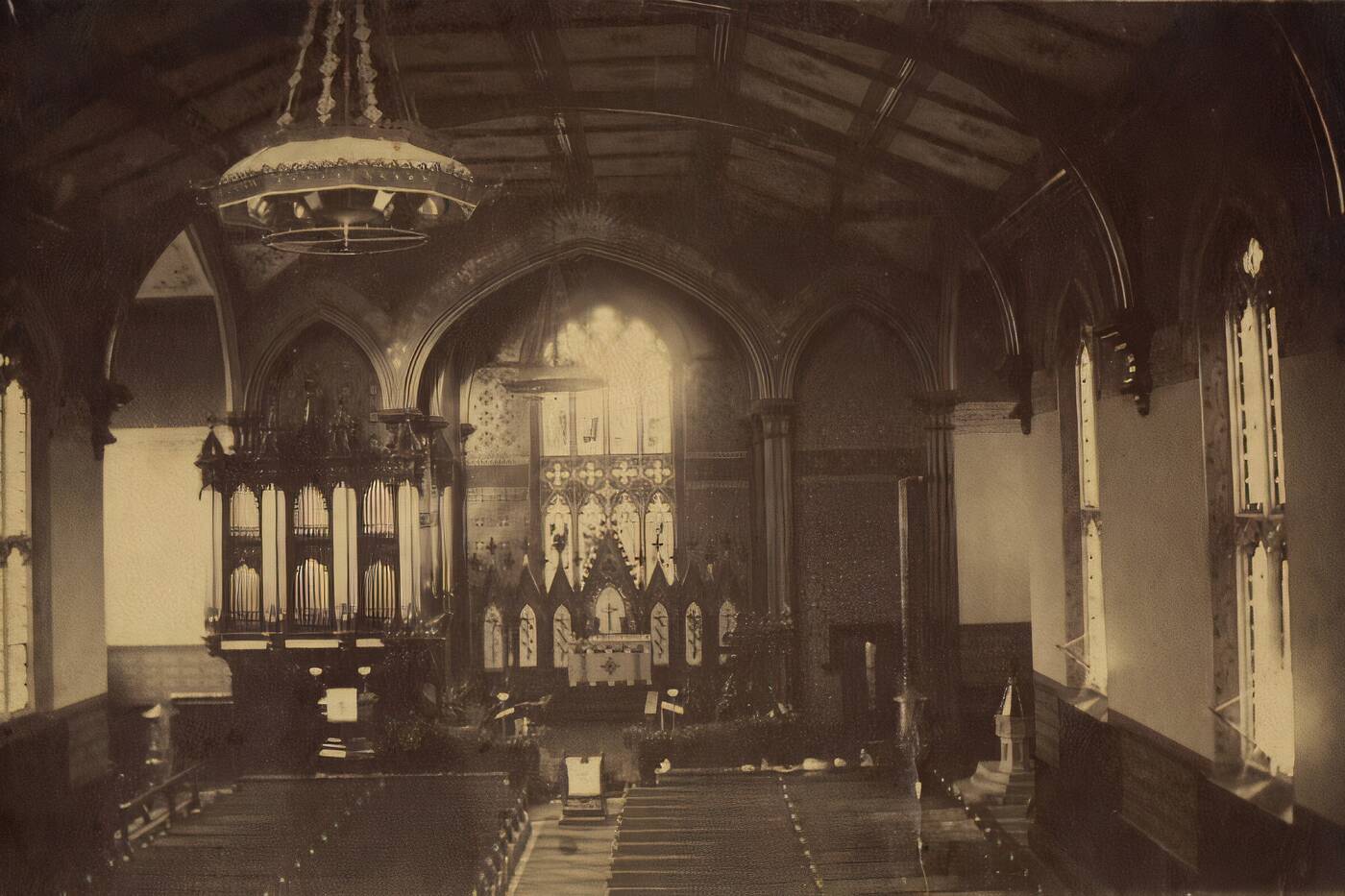 The church's interior in 1884. Photo from the Toronto Public Library.

When Holy Trinity was consecrated on October 27, 1847, the Bishop Strachan invited poor families of the Church of England faith to make the new church their spiritual home.

This was not an attempt to restrict the parishioners to those of humble means, but rather to fulfil the terms attached to the donation.

It was the first church in Toronto to have free pews. At the time, most churches charged pew rental fees. The cost of a pew at St. James Cathedral was prohibitive for those without a sizeable income.

In 1849, a fire swept along King Street that severely damaged the church of St. James. As a result, many of the parishioners from Holy Trinity and St. James worshipped together at Holy Trinity, including Lord Elgin, who was governor general at the time. This ended in 1850 when the new St. James was consecrated. 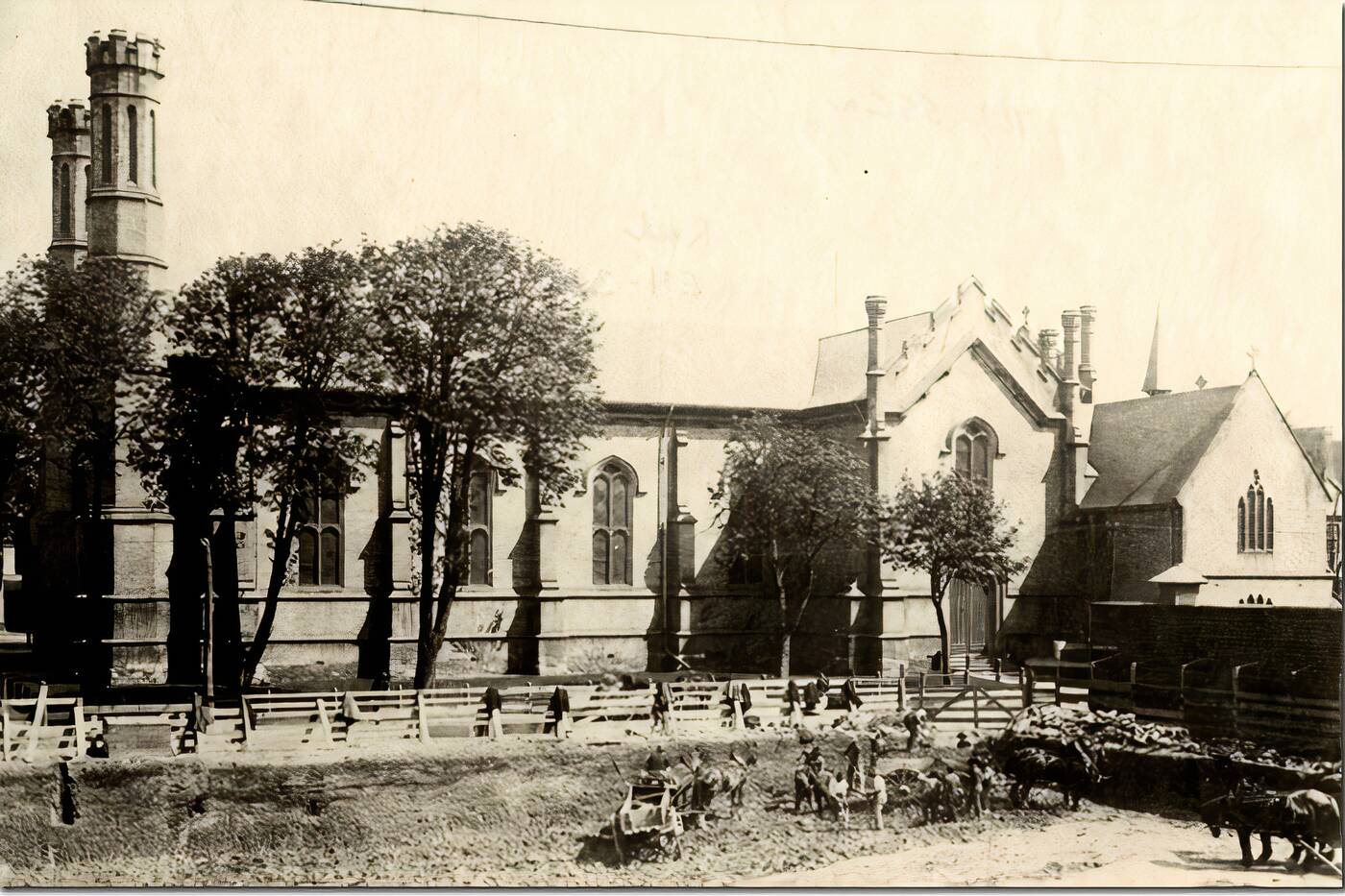 View of the south facade of Holy Trinity in 1908. In the foreground, workers are beginning the construction of an Eaton's warehouse. Photo via Toronto Public Library.

Since the pews in Holy Trinity were free, the church had no reliable source of income.

Bishop Strachan appointed his young chaplain, Henry Scadding, who was employed as a classics master at Upper Canada College, to be the church's incumbent with no salary. Scadding remained its rector until 1875, and he died in 1901.

The land to build the church was donated by John Simcoe Macaulay. It was constructed in a Gothic style from the interior of the church in the cruciform plan to the altar visible regardless of where parishioners were seated.

The structure's facades were of yellow bricks from the Don Valley brickyards, and timbers were cut from the nearby forests. 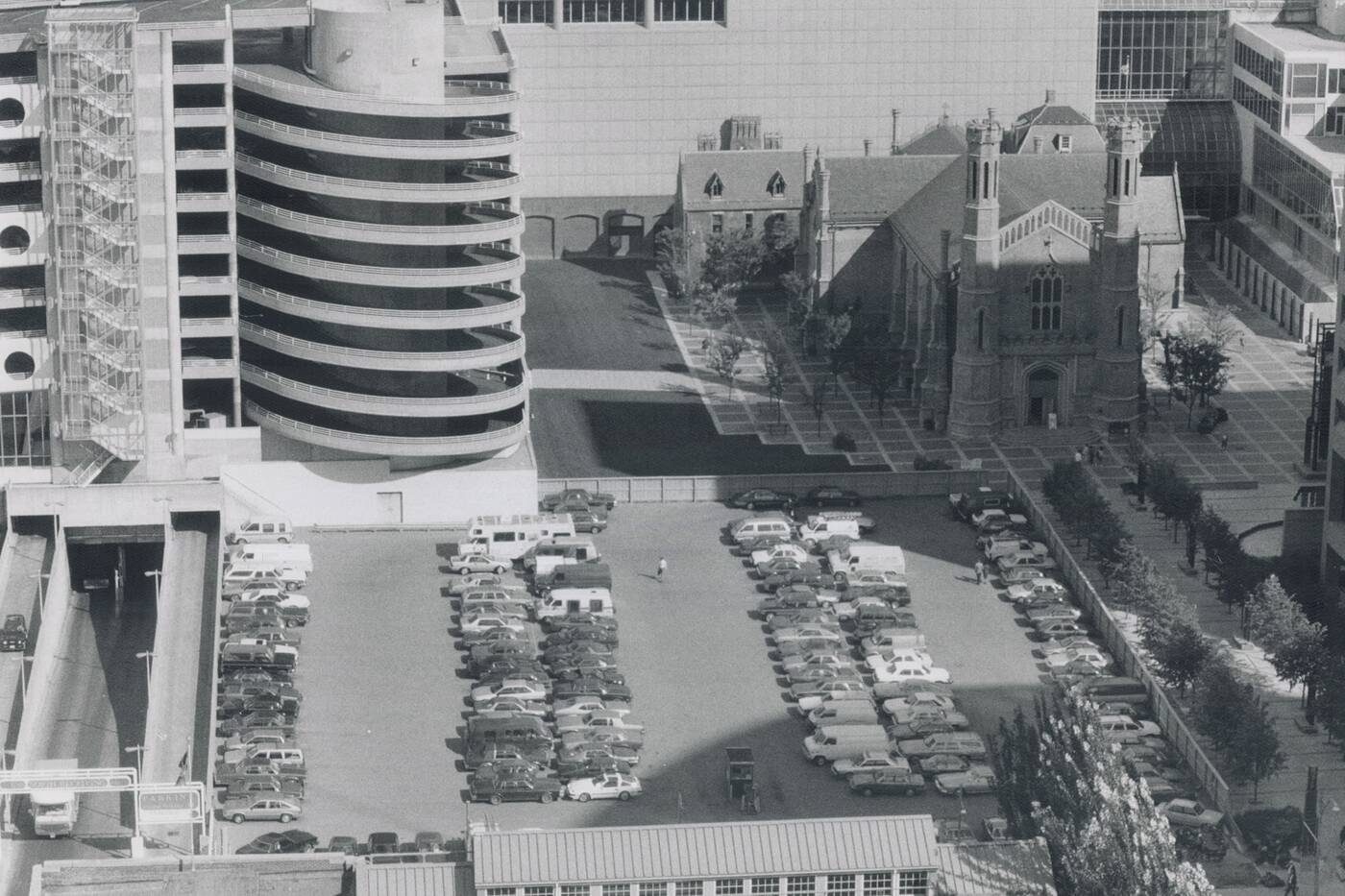 Holy Trinity in 1987, before some of its land got turned into a Marriott. Photo by Boris Spremo via Toronto Public Library.

Its main entrance faced west with an impressive Gothic doorway and a large window above it. Two towers were built on the northwest and southwest corners of the west facade. The slates for the roof arrived in Canada as ballast in sailing ships.

From the mid 1800s, Holy Trinity was known as a church associated with the "Catholic Revival" in the Church of England, which sought inspiration from medieval days.

It was viewed by some as a purer faith, as it applied more formality to the services than other churches. However, this was coupled with a keen sense of social responsibility. 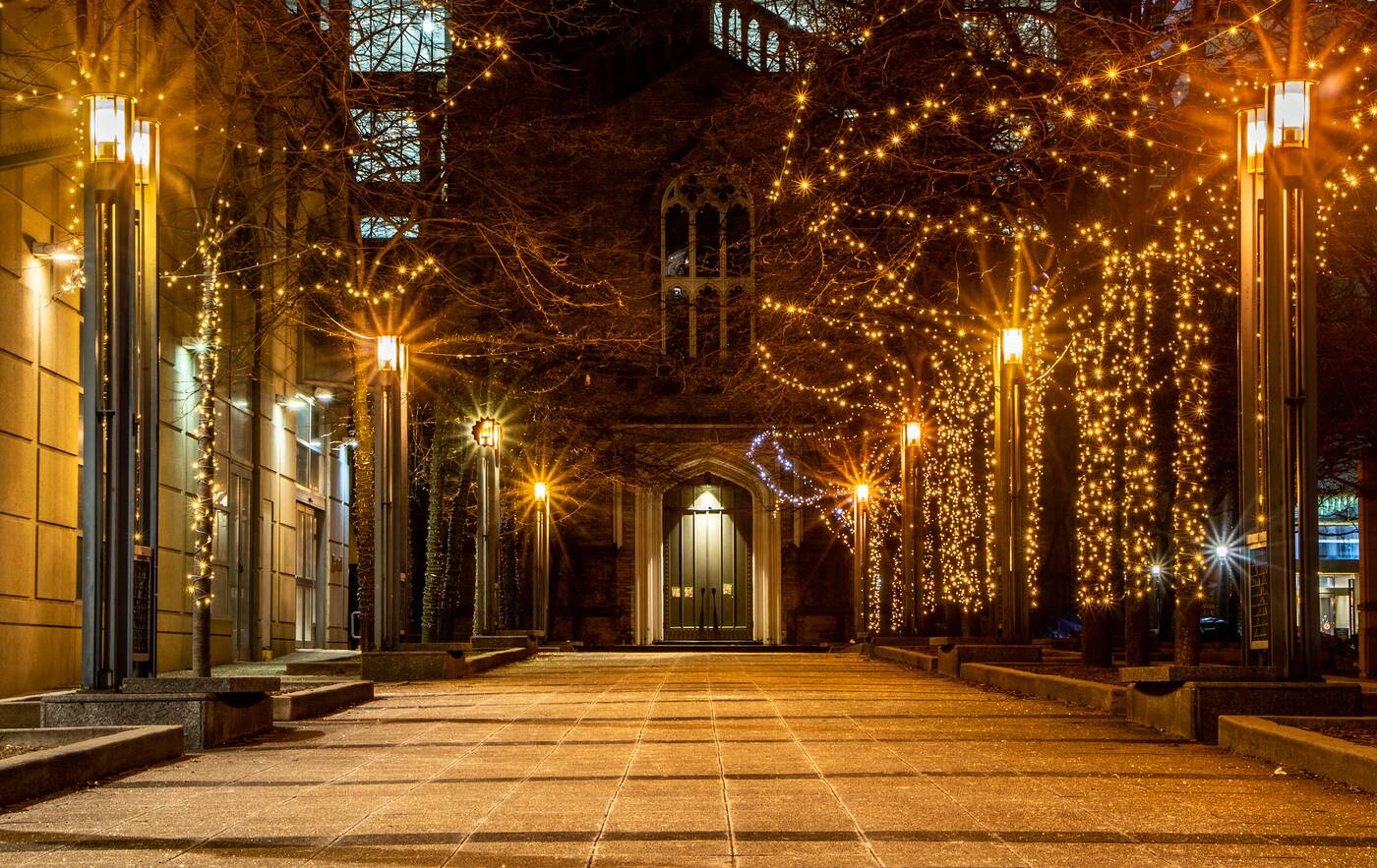 This approach was intensified when the Reverend John Frank became rector in the 1930s. It was he who introduced the pageant of the Christmas Story, a tradition that continues to this day.

When the $200,000,000 Eaton Centre was built, it encompassed 15 acres. An attempt was made to demolish the church and include the land within the mall.

The congregation fought back and the Eaton Centre was forced to build around the structure, thus preserving this historic church and two other buildings. 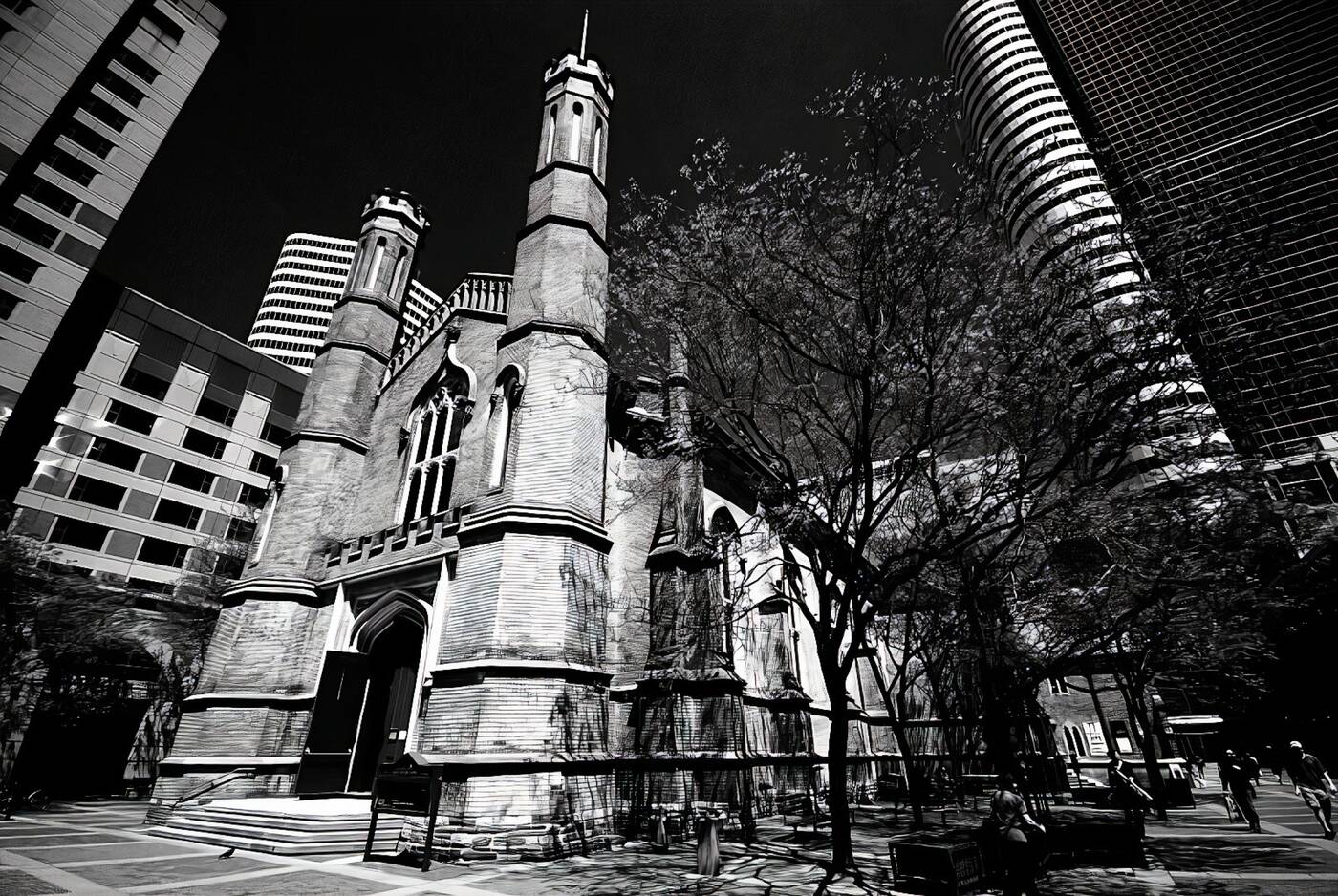 The church today remains a quiet sanctuary in the heart of downtown Toronto. Photo by Scott Wilton.

The church is today well recognized for its outreach program, which ministers to the needs of people in the inner city. It is a unique congregation with roots in Toronto's past, but well aware of the people's needs today.

Doug Taylor was a teacher, historian, author and artist who wrote extensively about Toronto history on tayloronhistory.com. This article first appeared on his site on September 16, 2013 and has been republished here with the permission of his estate. The article has been modified slightly.