Although you likely couldn't tell, King's Mill Park was an active dumpsite in the 1950s before it joined the chain of parks along Toronto's Humber River.

And even before it was a landfill, the park was home to the King's Mill Reserve in 1973 where timber was supplied for building ships.

The beautiful piece of parkland is now a slice of nature in the west end of the city with plenty of wildlife and hiking trails to be explored. 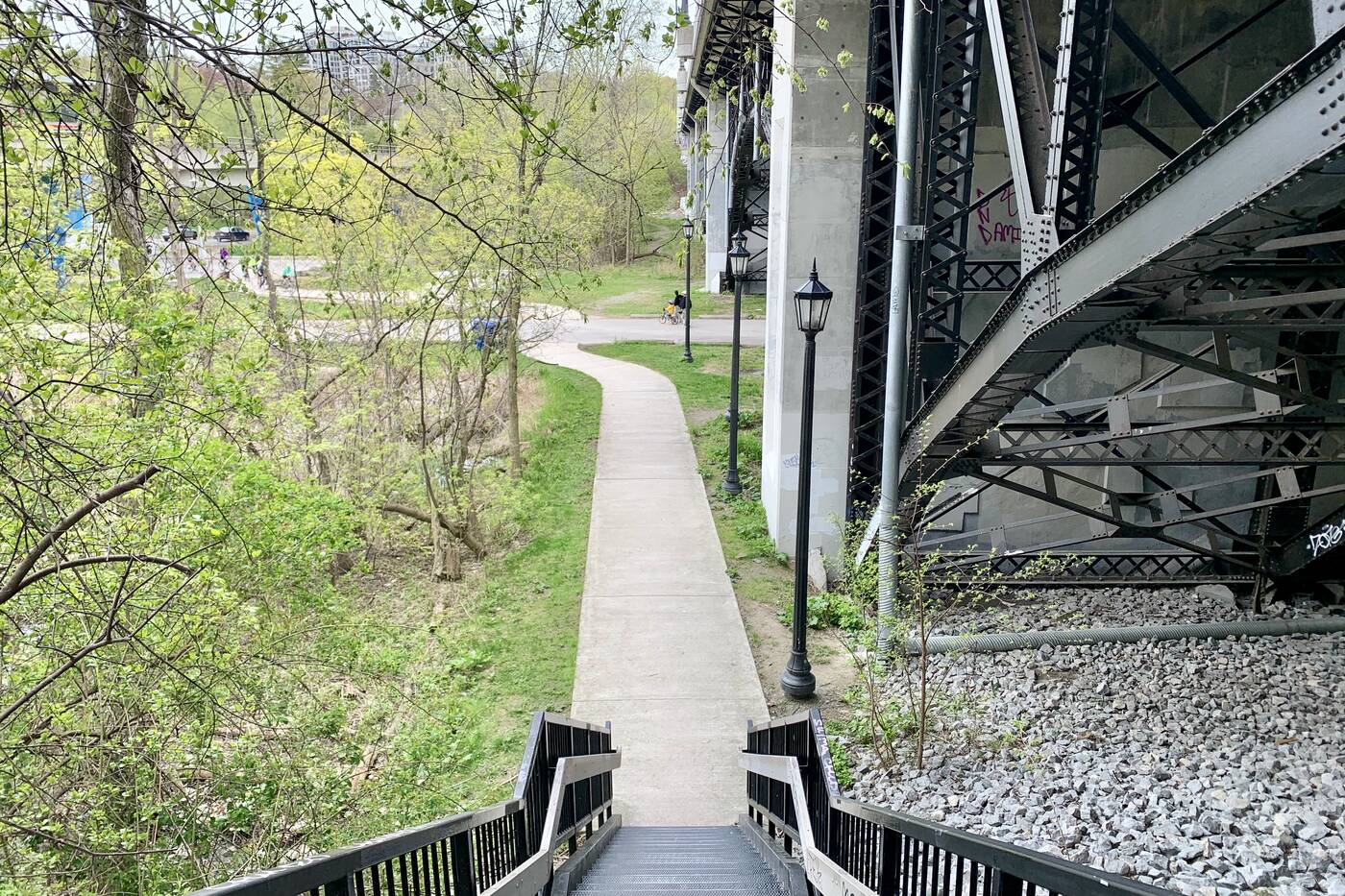 Bordered on the north by old grist mill ruins that have been converted into an upscale hotel and the massive Park Lawn Cemetery on the west, you can get to the park by a staircase off Bloor. 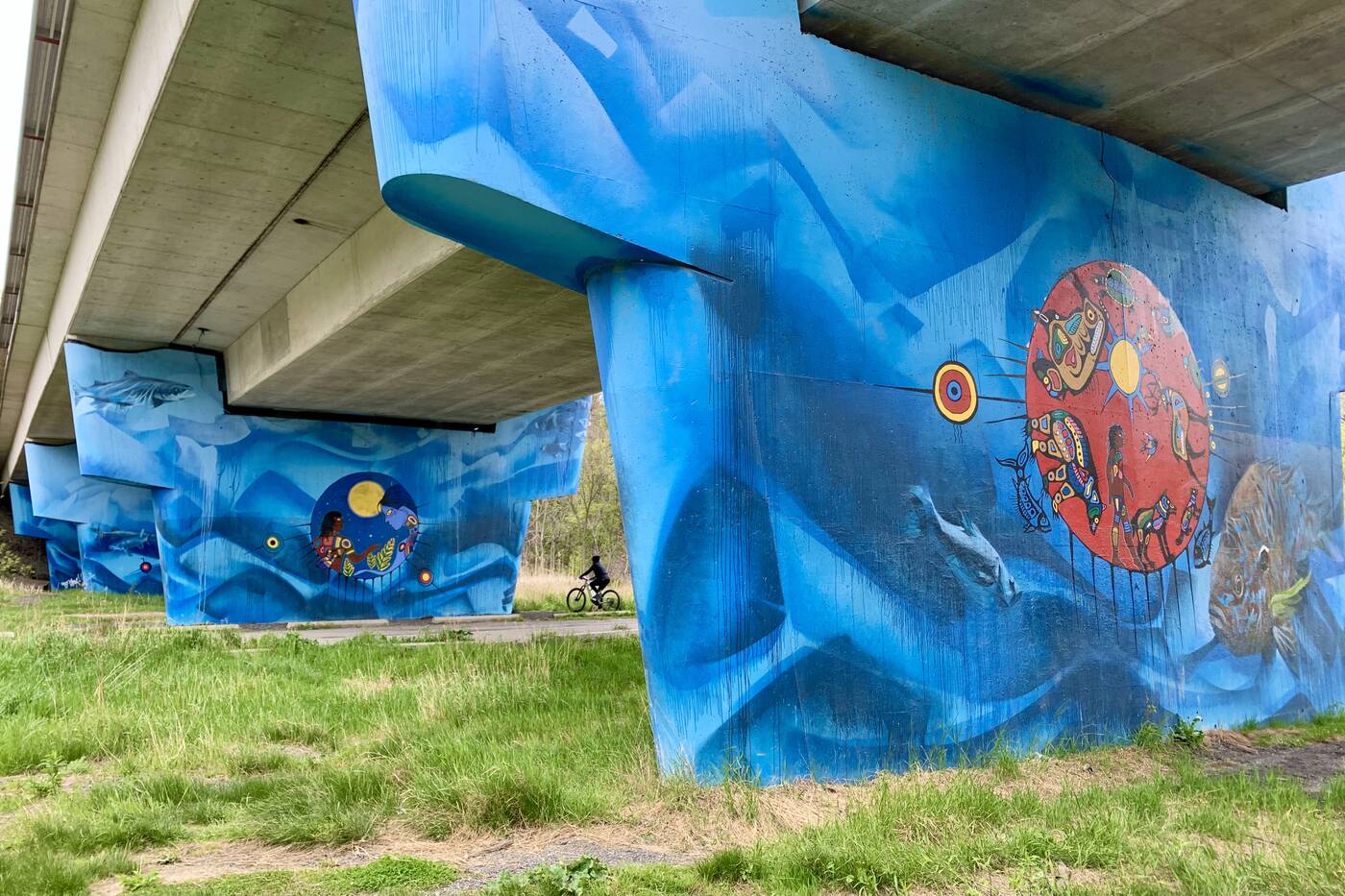 The murals on the Old Mill subway station pillars were painted by artist Philip Cote.

The Old Mill subway station is in the middle of the park, so it couldn't be easier to get to. There are also two large parking lots on this end for those that are driving.

The concrete legs that support the subway train platform overhead each display a different mural painted by artist and member of the Moose Deer Point First Nation Philip Cote, adding beautiful pops of colour to the trail. 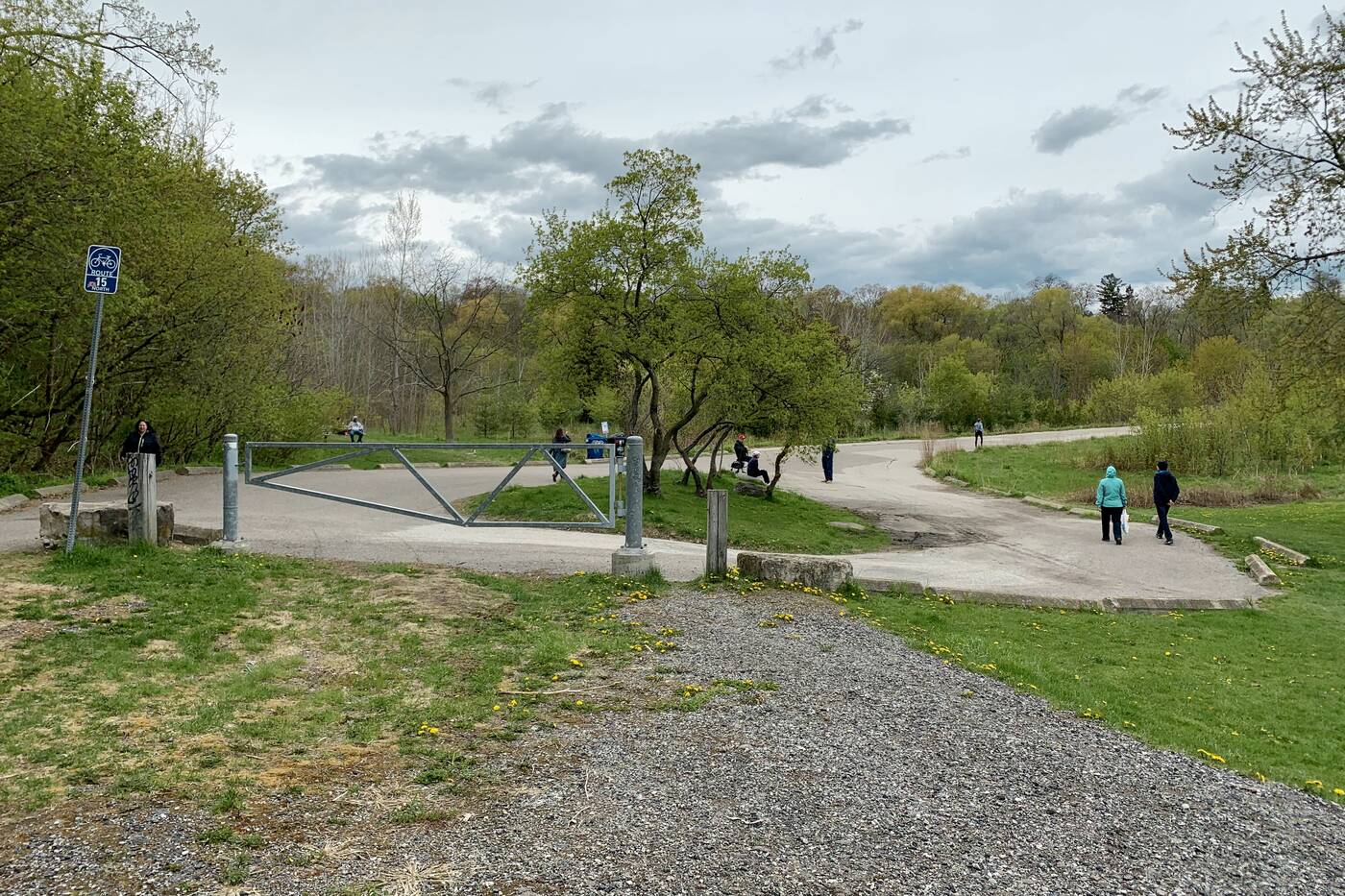 The Humber River Recreational Trail is nicely paved and runs through the park.

Most of those on bikes choose to journey through the park by way of the paved Humber River Recreational Trail, which connects King's Mill to the equally picturesque Lambton Woods. 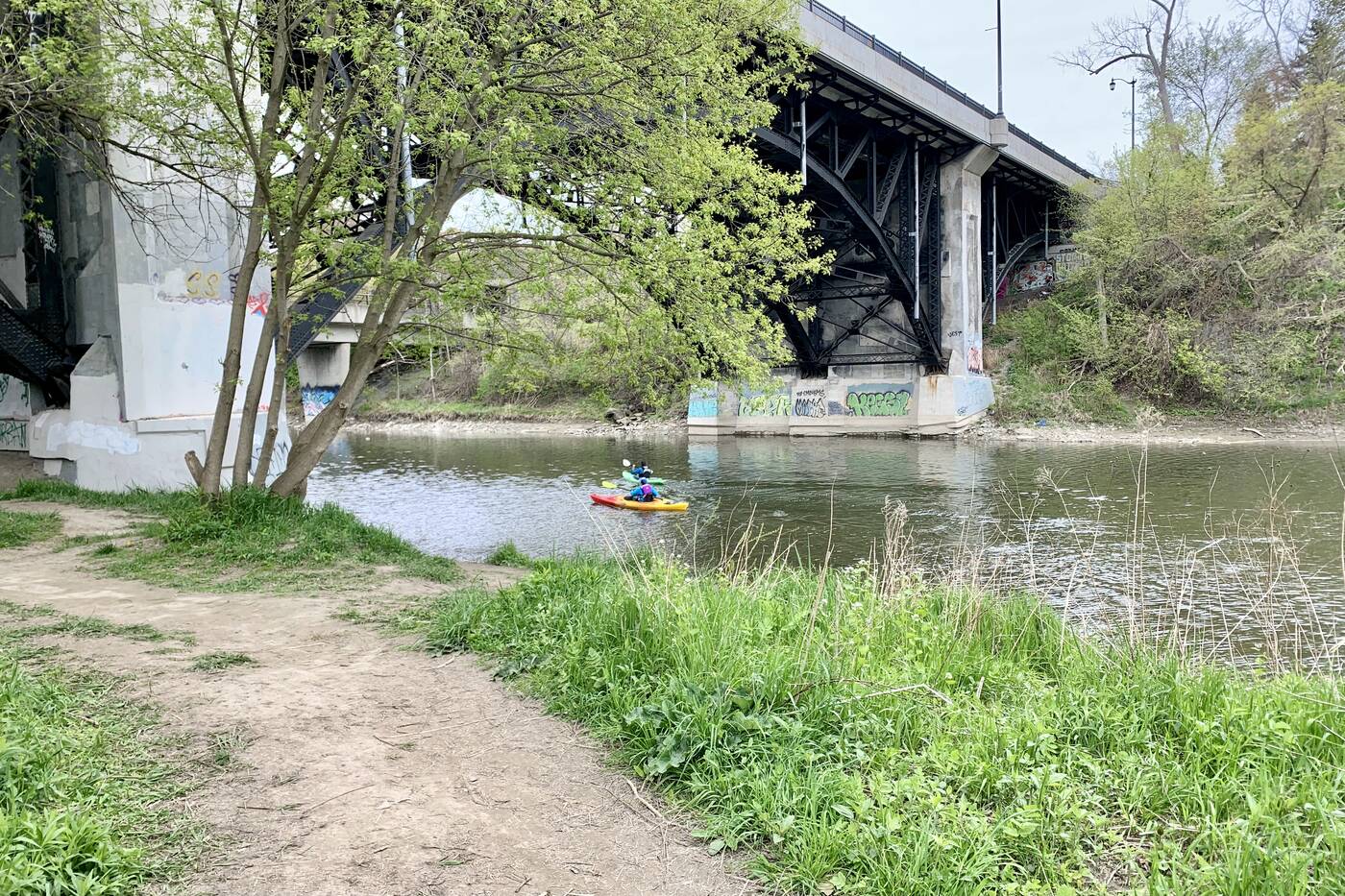 It's a popular spot for kayakers and canoers in the summer time.

Whether you're on bike or exploring the area on foot, make sure to venture down to the banks of the Humber. Plenty of kayakers, canoers and paddle boarders take to the water in the warmer months. 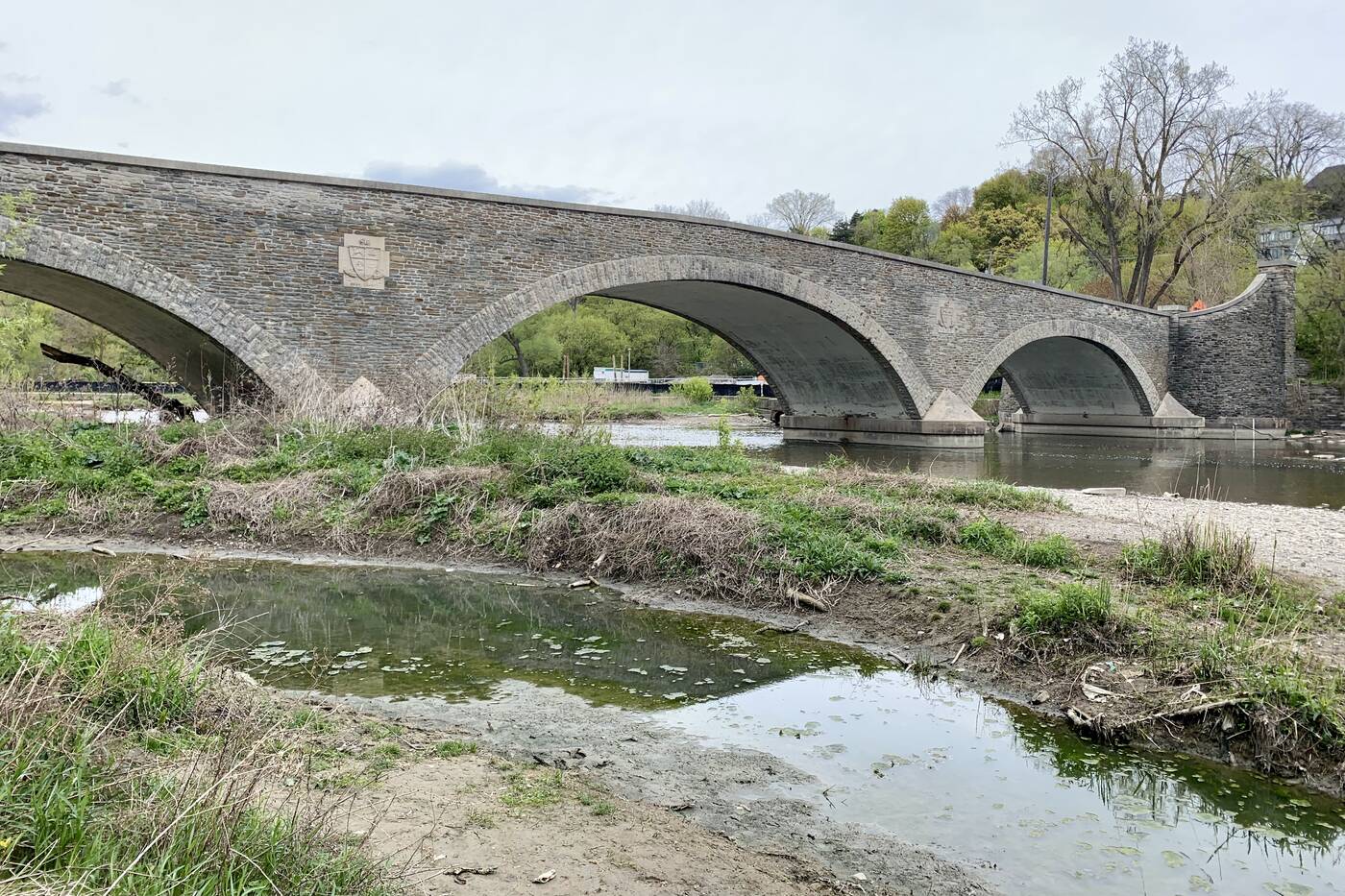 The Old Mill Bridge was constructed in 1916 and makes for a good spot to view the salmon run.

The waterway is also home to over 60 species of fish including trout, pike and salmon. Built in 1916, the historic Old Mill Bridge provides optimal views over the river making it a good spot to watch the salmon run in the fall. 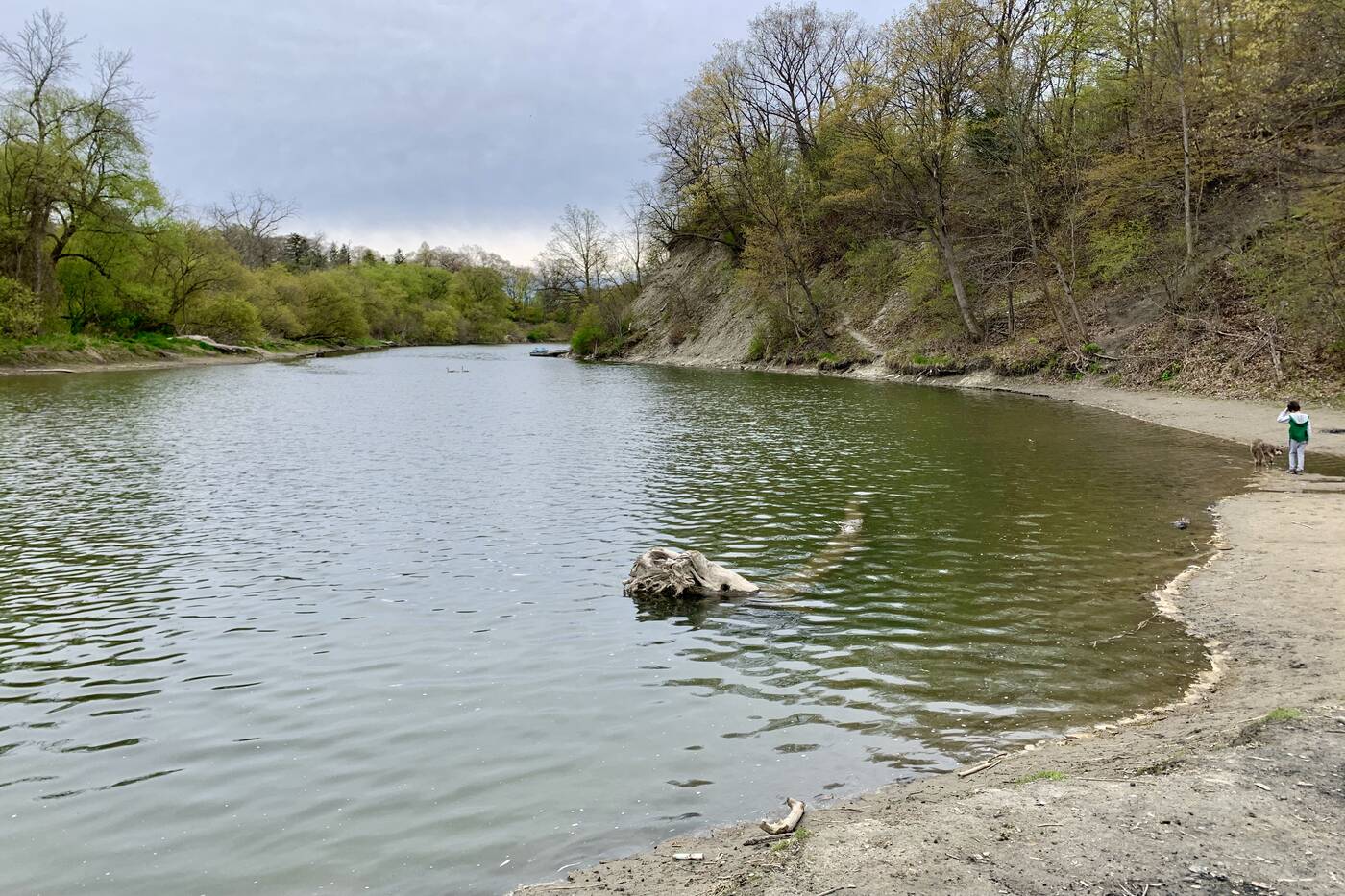 The Humber Marshes in the area is one of the few remaining river-mouth marshes in Toronto.

As you continue south toward the Lake, you'll hit the Humber Marshes. Known as one of the last remaining river mouth marshes in the city, the swampy waters provide just the right breeding conditions for ducks, turtles and fish. 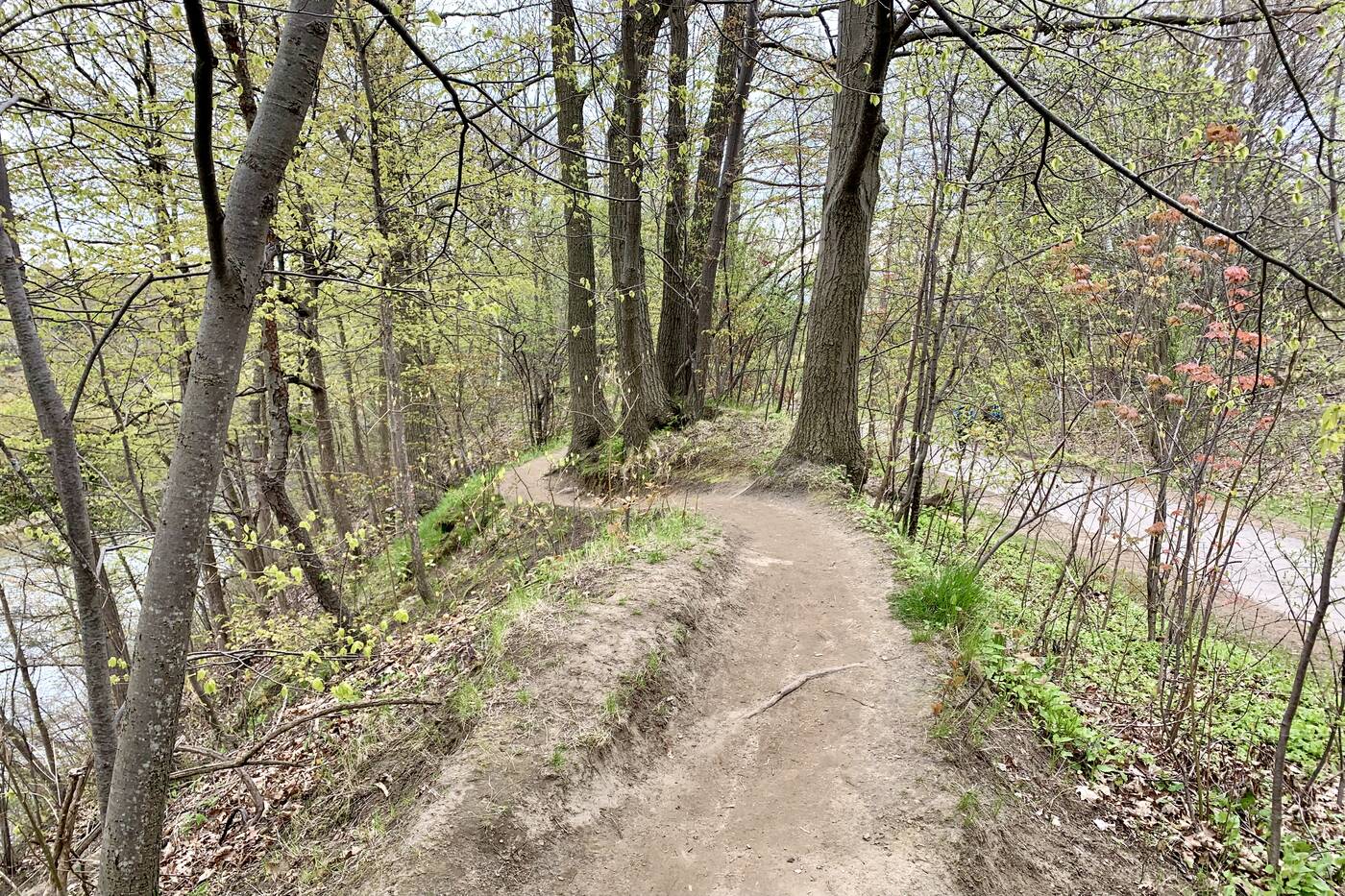 A dirt path follows next to the paved trail where you can stick closer to the water.

The trail meanders toward Toronto Humber Yacht Club, which is members-only. As you walk you can choose between the paved roadway and the winding dirt path. 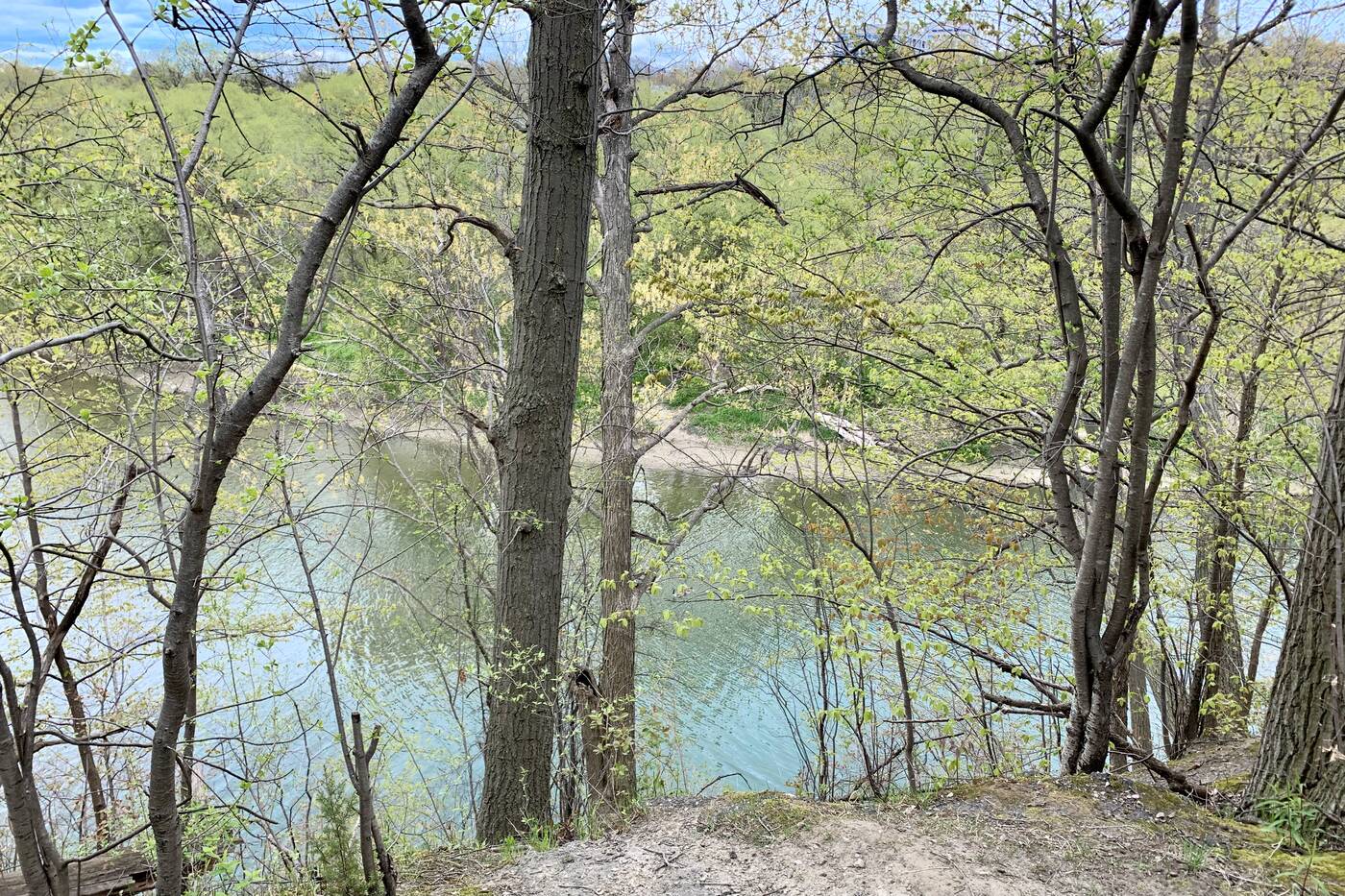 Be careful following the dirt trail as it follows a steep cliff's edge.

Choose the latter and you'll be rewarded with incredible views of the river below. 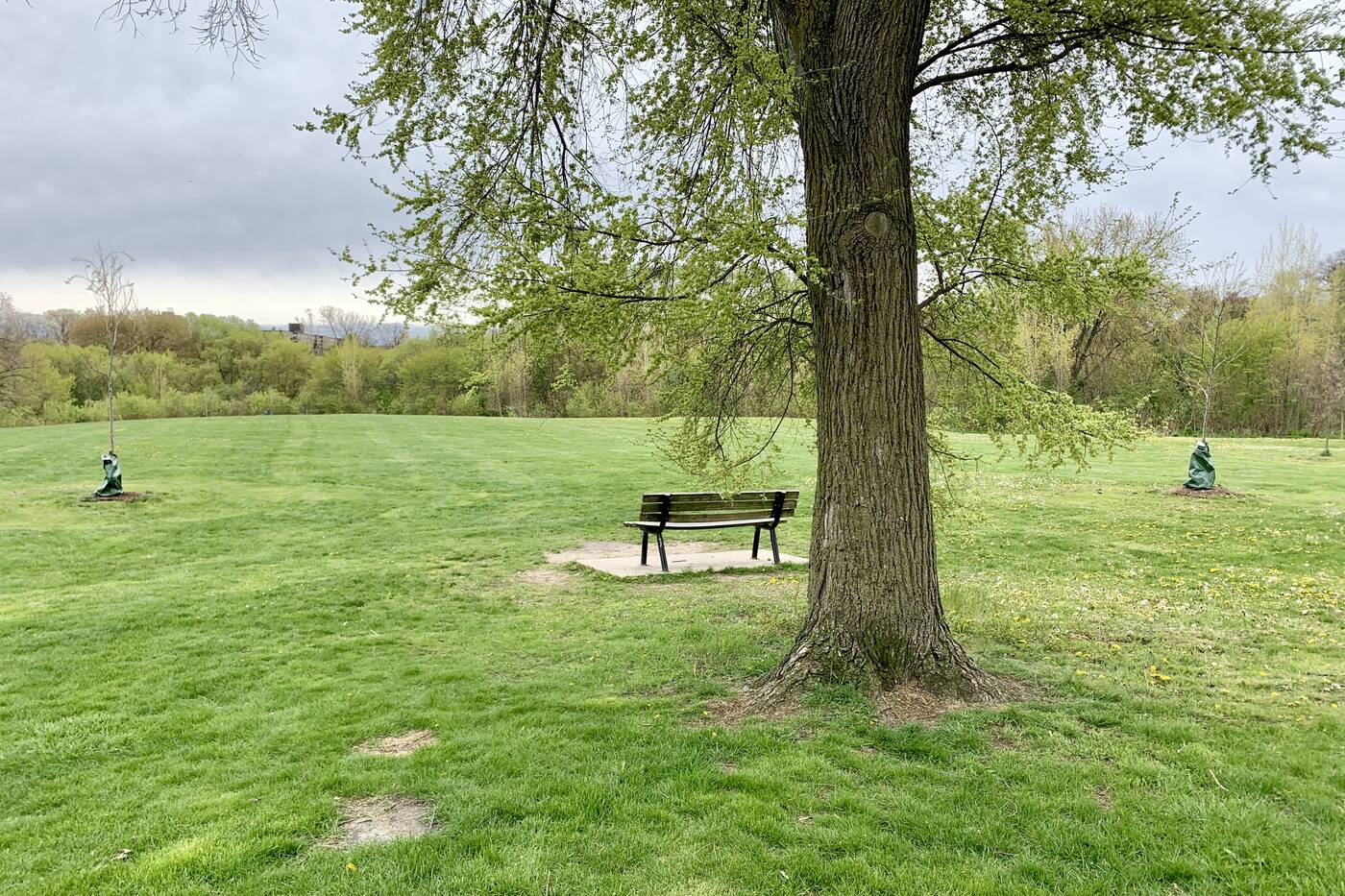 Large grassy areas can be found next to the Humber Yacht Club.

You'll find expansive grass areas where picnickers and dog owners tend to congregate on blankets and benches just past the exclusive boat club. 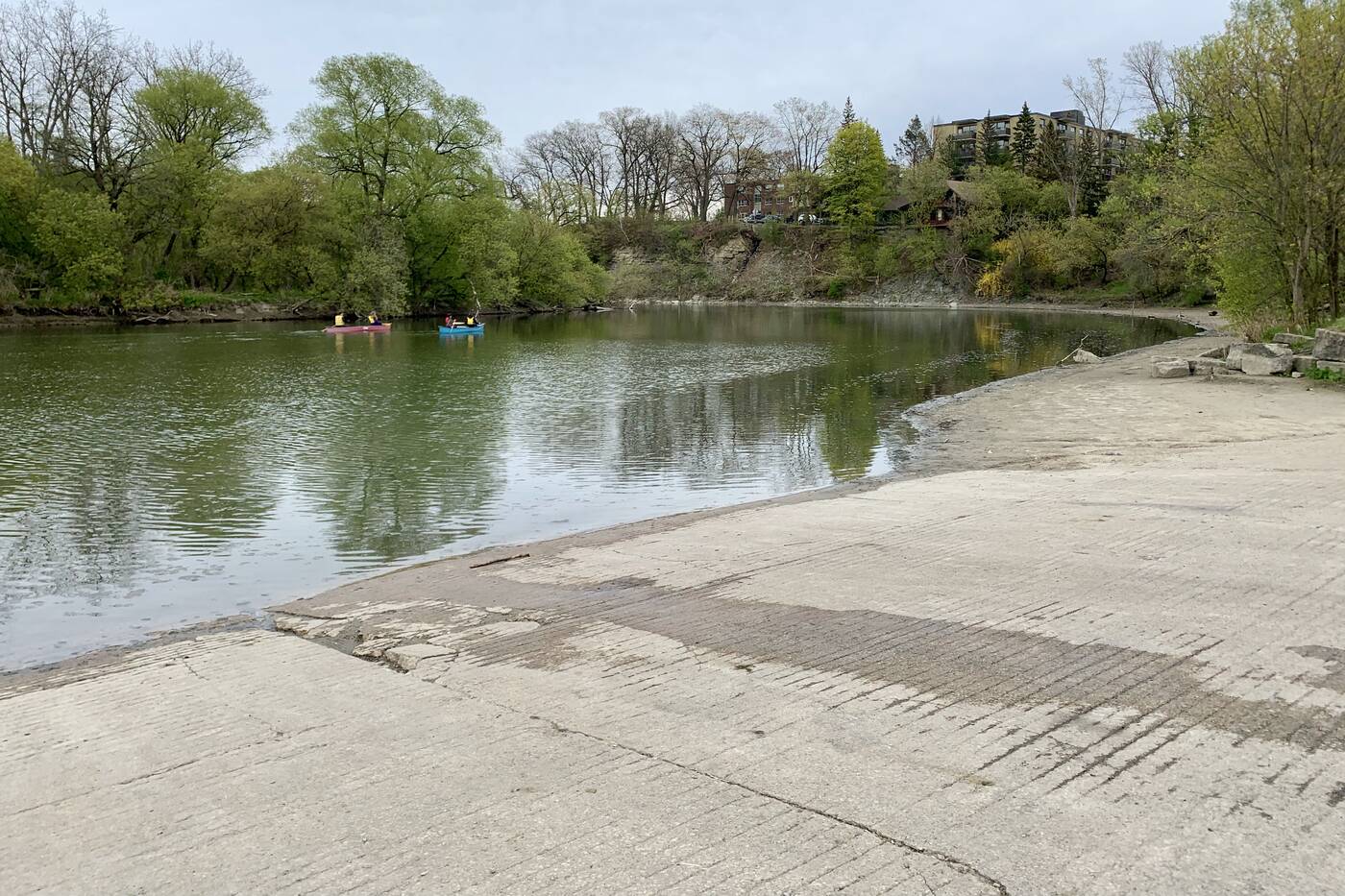 The public boat launch in the park's south end where most kayakers and canoers get to the river.

There is also a public boat launch here where the majority of kayakers and canoers start their paddle down the Humber River. Accessible off Humber Valley Drive, north of Riverwood Parkway, this end of the park has another parking lot. 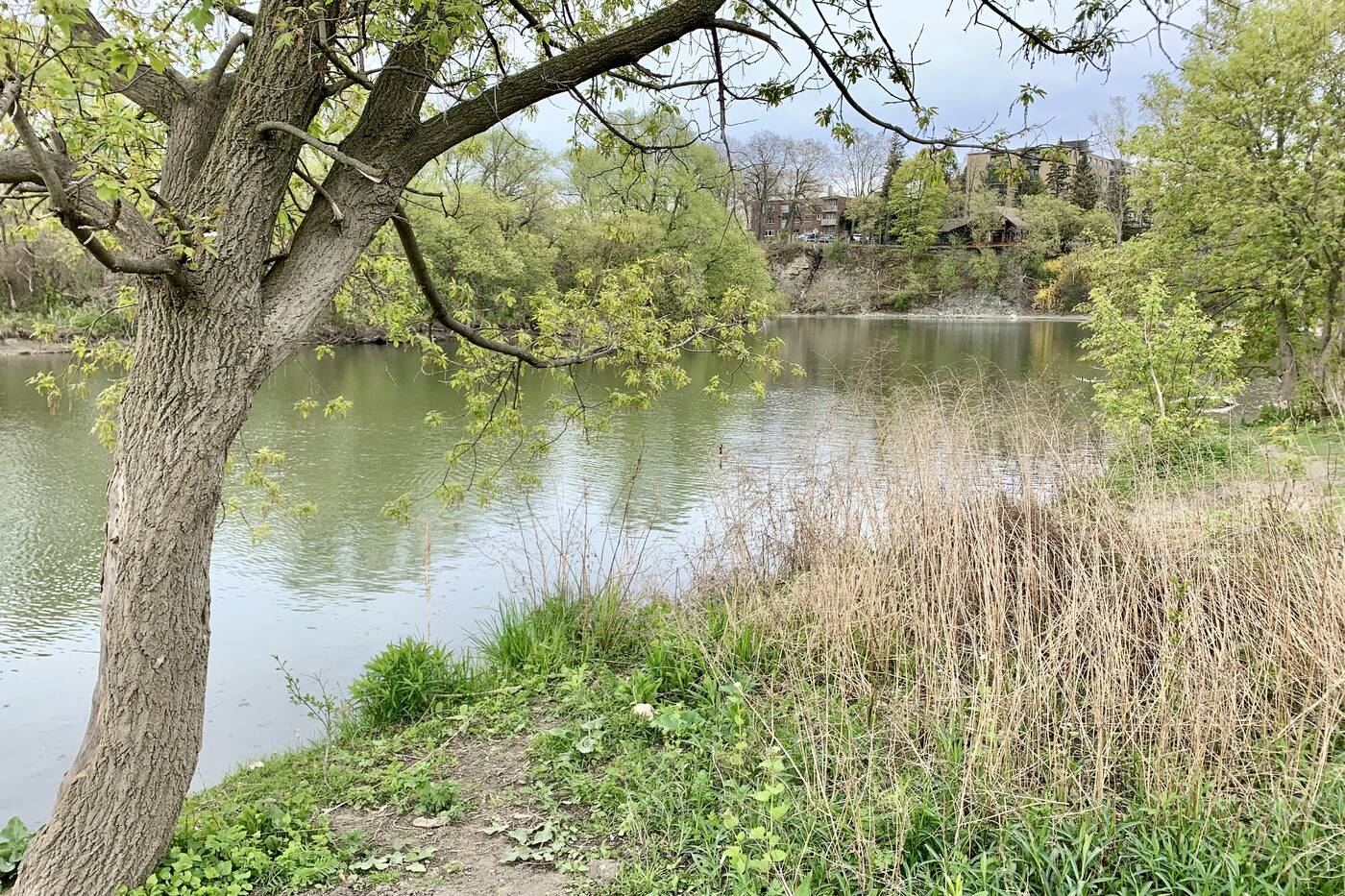 There are countless spots to sit and take in the views next to the river.

The kilometres of beautiful parkland in either direction makes the park the perfect spot to escape the city noise. Take your pick of the many peaceful spots down by the water and stay awhile.