Toronto's retail scene is slowly, gradually and (by the looks of it) safely coming back to life after more than three months of mandated government closures during which all "non-essential"  businesses were restricted to curbside pickup and delivery.

In other words: Stores are open and people be shoppin'... as best as they can under current circumstances. 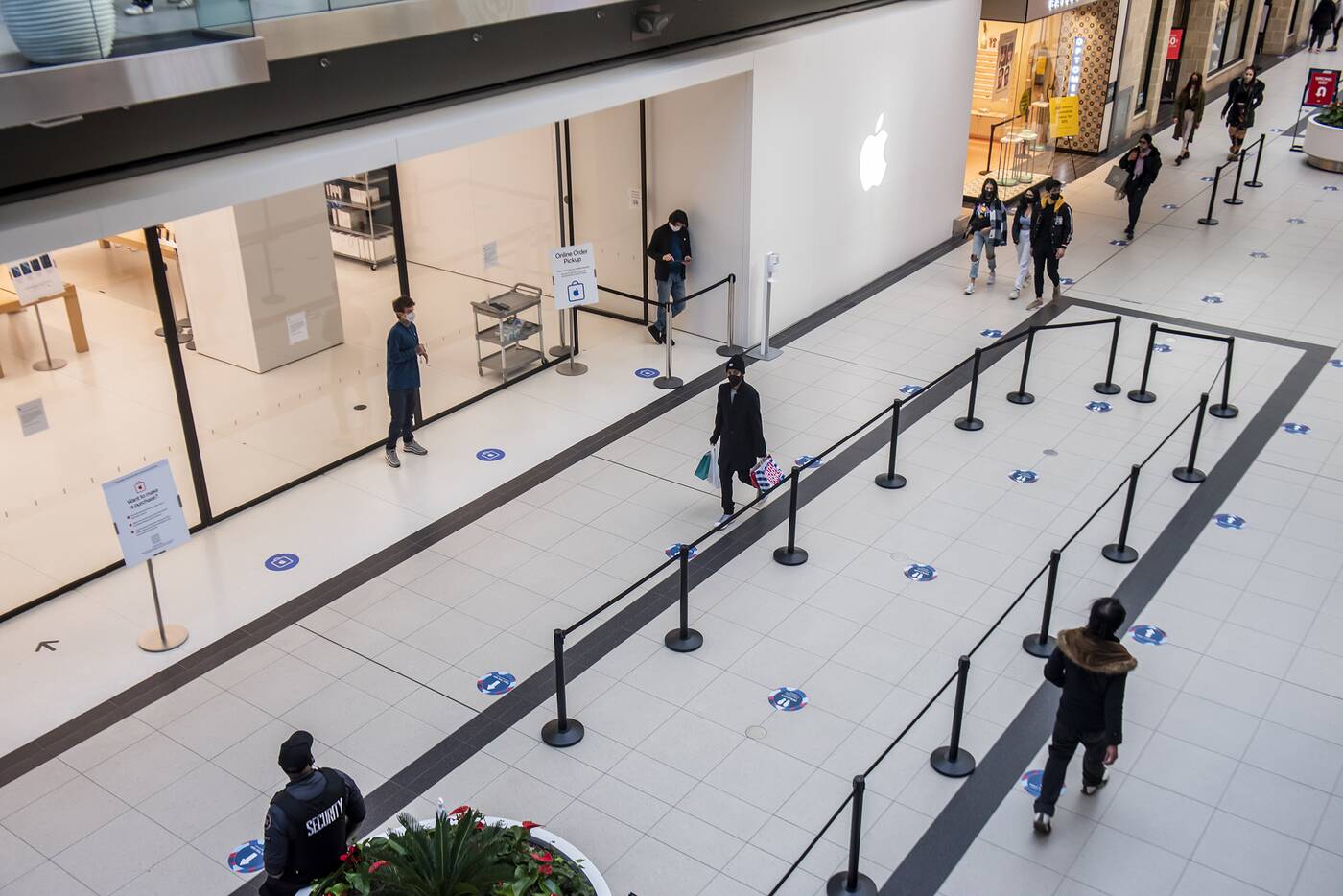 As part of the provincial government's newly-modified Grey-Lockdown zone restrictions, all retailers have been permitted to reopen with capacity limits of 25 per cent in place (50 per cent for supermarkets, convenience stores and pharmacies.)

It was a busy day for The Shops at Aura in Toronto - 📹 @hectoravasquez #Toronto #ShopsAtAura pic.twitter.com/E2QKTJLz0n

This is in stark contrast to what we experienced the first time Toronto went into the grey zone, when all retail stores and malls were shuttered on November 23. 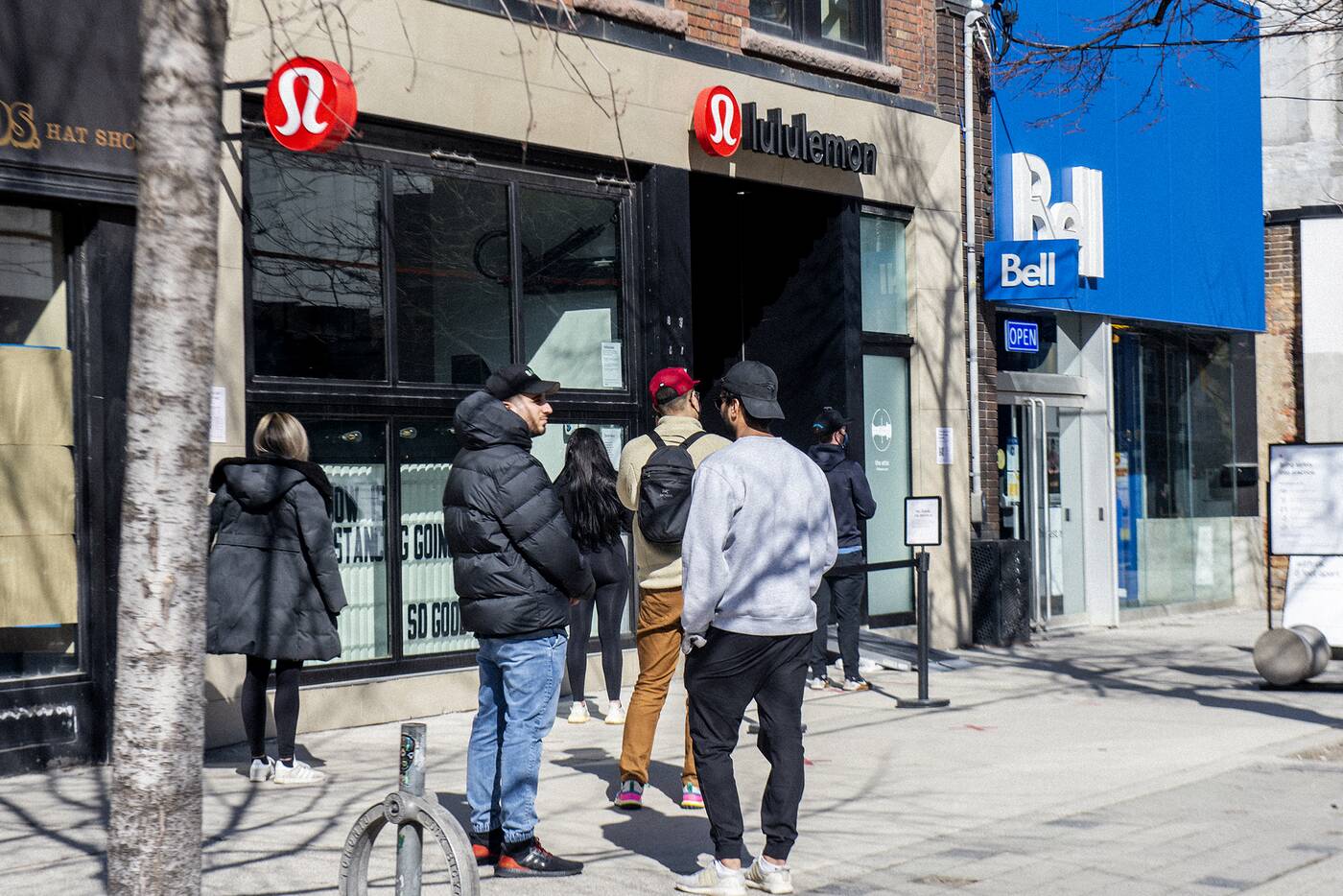 Between the blanket provincewide shutdown that came into effect on Boxing Day, the state of emergency declared in January, and the stay-at-home order that finally just lifted, non-essential retail stores had been shuttered in Canada's largest city for 15 weeks prior to Monday morning. 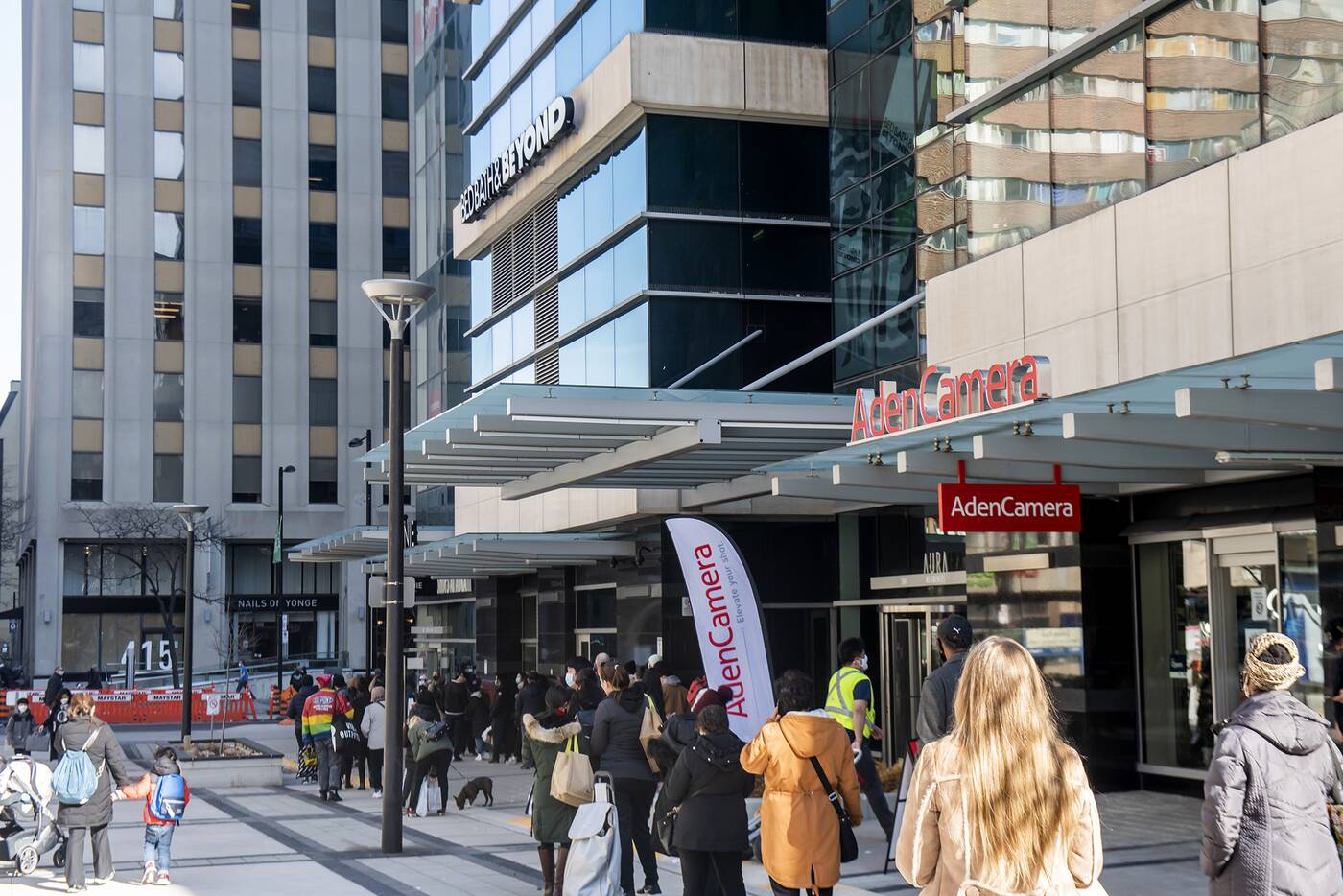 As of 12:01 a.m. on March 8, Toronto is once again part of Ontario's COVID-19 response framework — though little has changed aside from the modest store opening and increased outdoor gathering limits (we're up from five people to ten!)

Still, it's more freedom to shop than we've had around these parts for more than three months, and consumers are clearly eager to get back out there and browse the shelves. 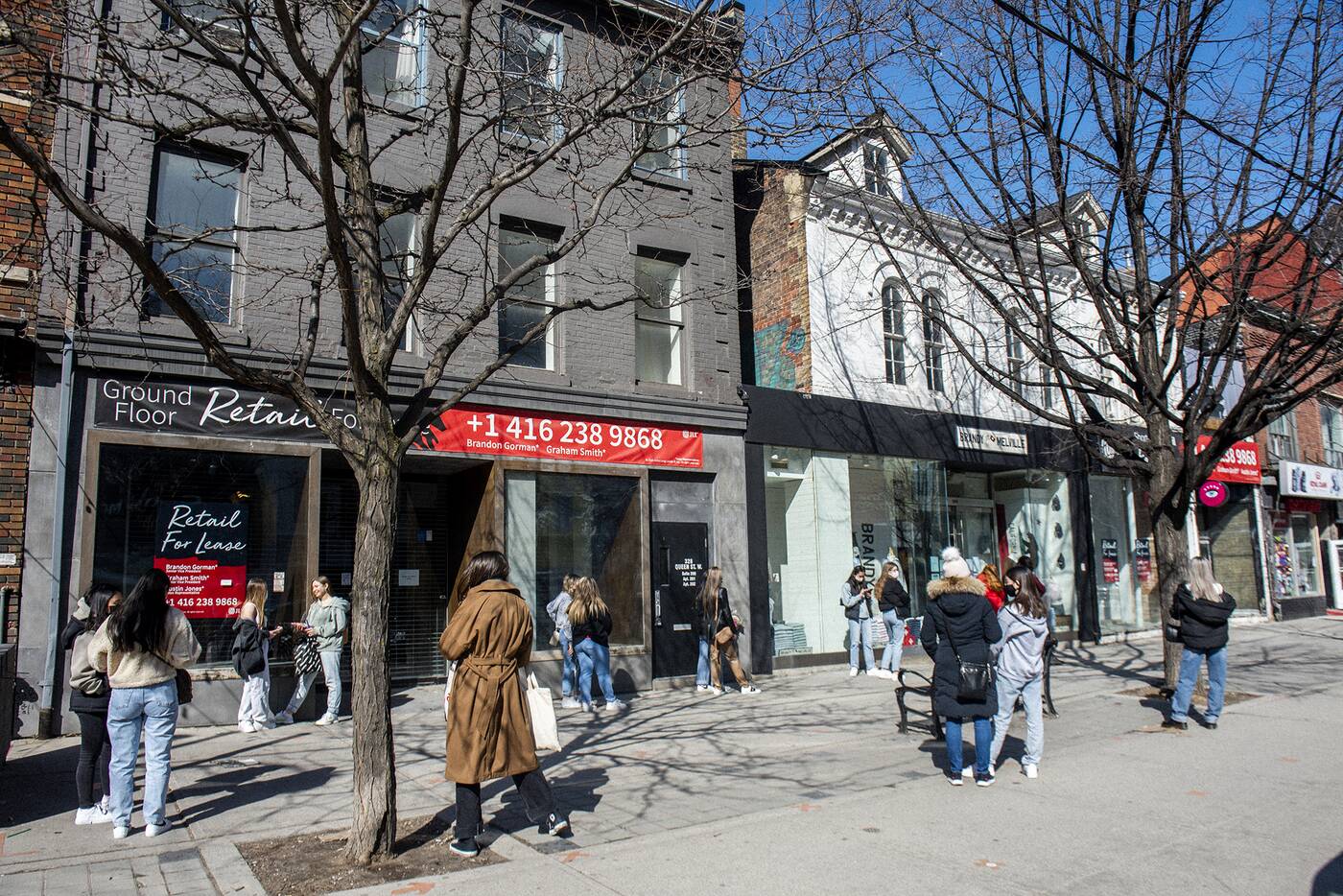 Long lines have been spotted around the city in recent days for popular retailers such as Bed Bath & Beyond and Winners, as well as outside most local malls.

This is what the line to get into Winners College Park looks like Tuesday afternoon - 📹 @hectoravasquez #Toronto #Winners pic.twitter.com/wd1pCeJTVD

In fact, the entire TJX trinity of Winners, Marshalls and HomeSense has been drawing big crowds since Monday (as might have been expected based on what happened in neighbouring York Region recently.) 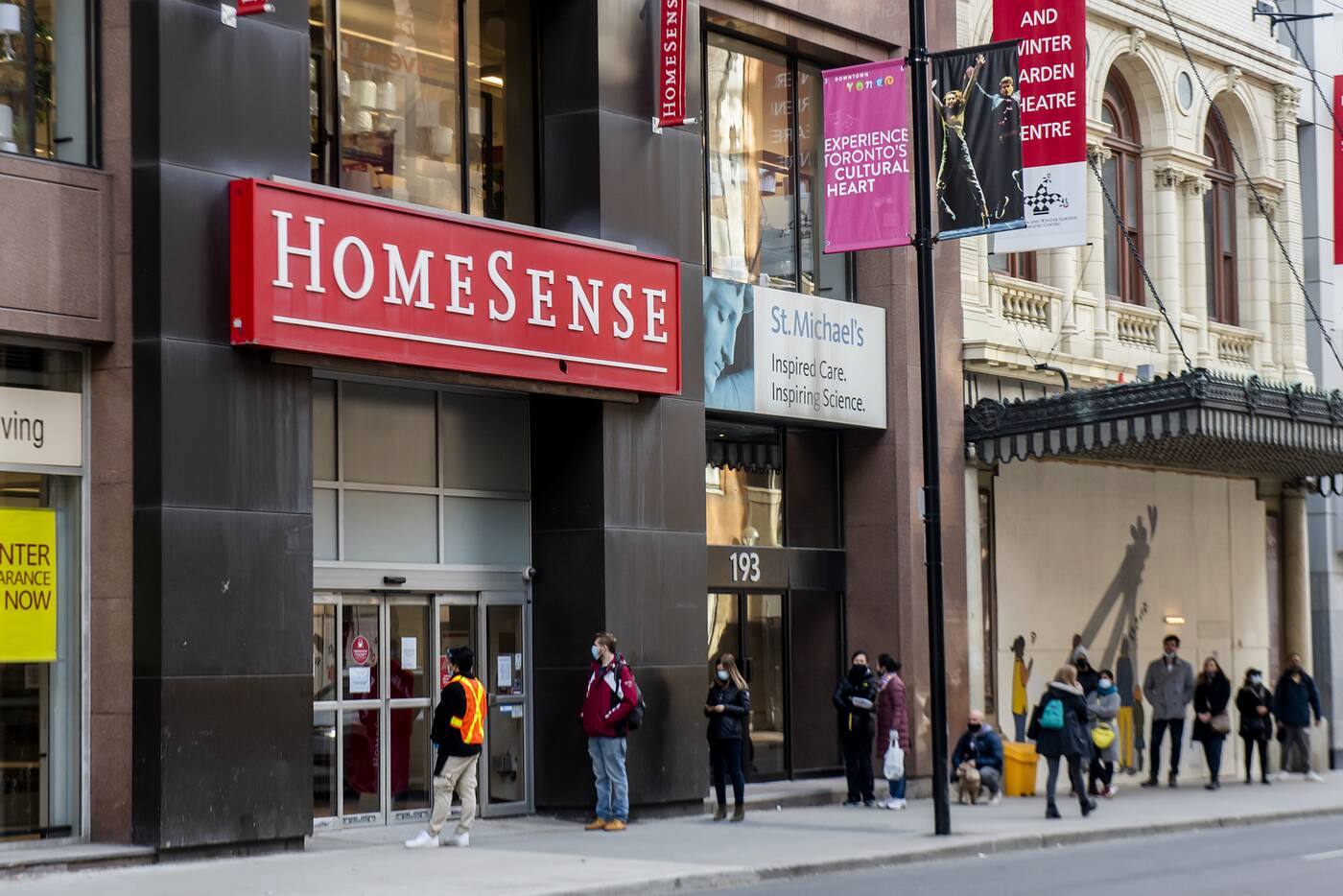 It's hard to blame people for wanting new stuff (especially from the aforementiomed retailers, none of which have online shopping options.)

People will, though, anyway.

What critics might not understand, however, is that big lineups are only forming outside of these places because few can enter at a time. 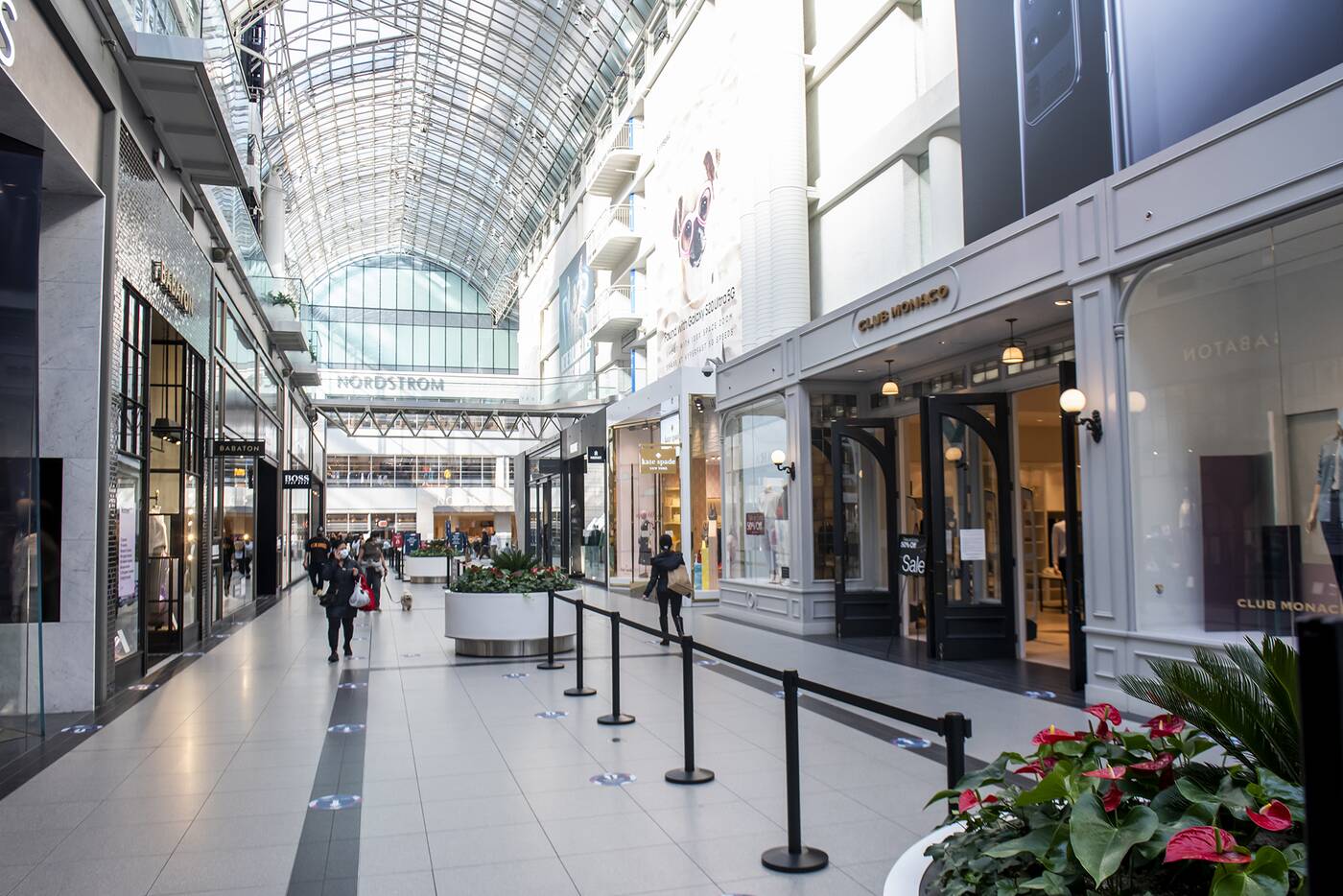 The Eaton Centre was eerily quiet on Tuesday afternoon in Toronto, despite the presence of customers waiting outside. 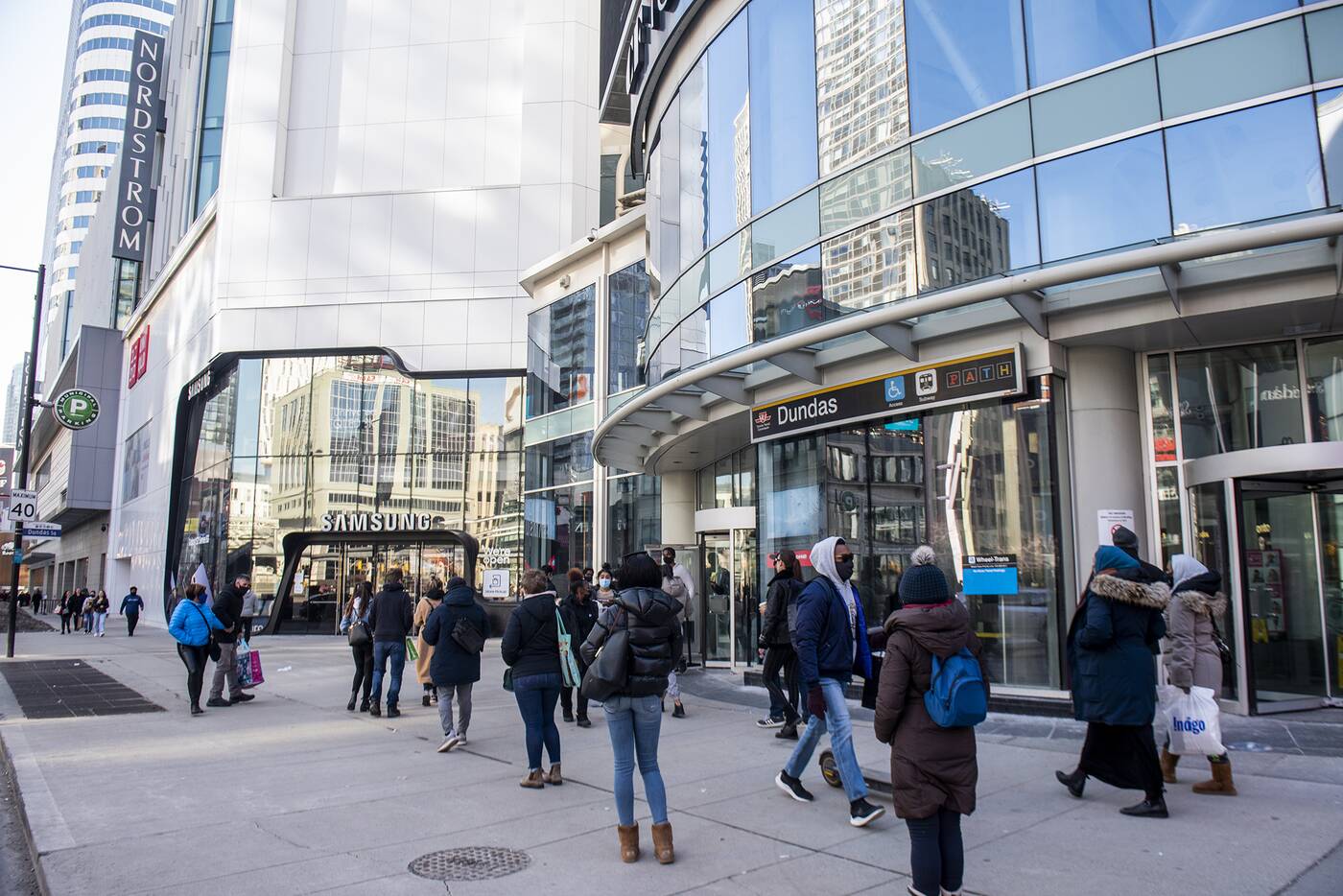 It's not as simple as waiting in line to get into the spot, either. You've got to screen yourself for symptoms first.

At The Eaton Centre, screening is done through one's phone. Customers simply scan a barcode at the door and wait to be let in by security when capacity allows for it. 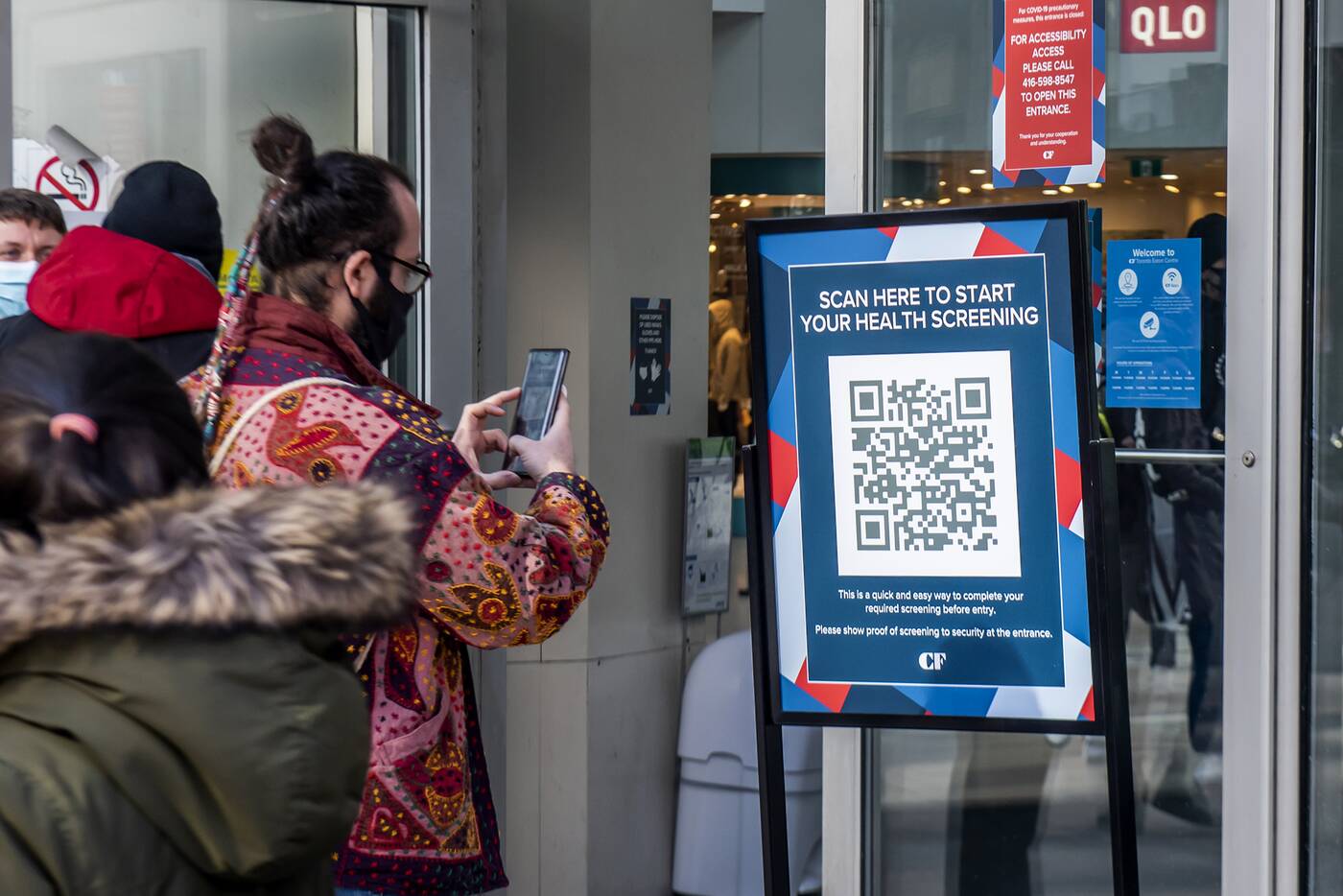 Current grey-zone regulations state that stores are required to "screen in compliance with any advice, recommendations and instructions issued by the Office of the Chief Medical Officer of Health or other public health officials."

Everyone entering the Eaton Centre is required to answer screening questions. The health screening is done on your phone - 📹 @hectoravasquez #Toronto #EatonCentre pic.twitter.com/iyd1oNwhtp

Clear signs with screening instructions must be posted outside every entrance to a businesses and all employees must be actively screened before entering the premises. 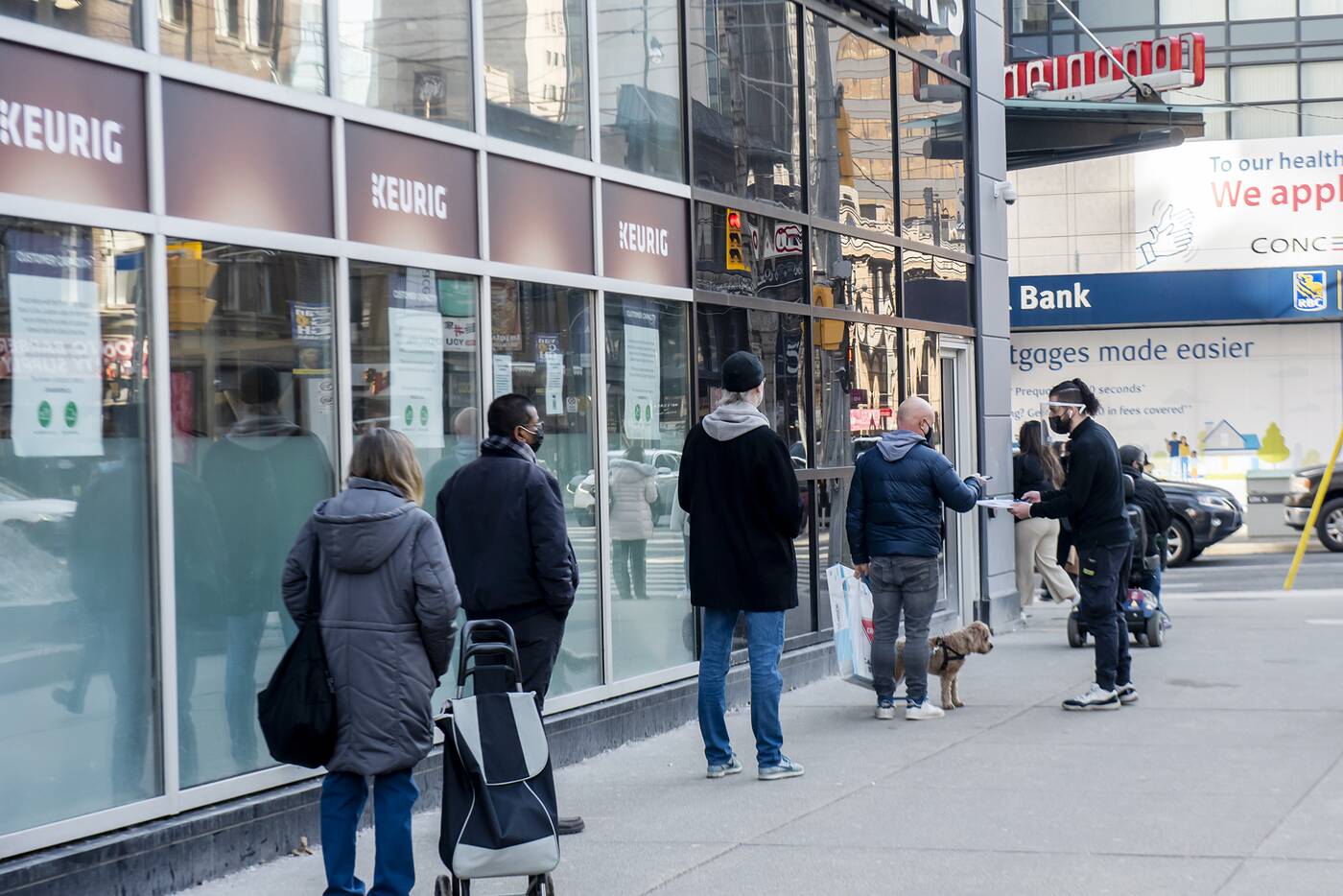 For these and other public health reasons, it appears as though many stores downtown have stepped up security outside with dedicated, PPE-clad screeing staff and additional spacing partitions. 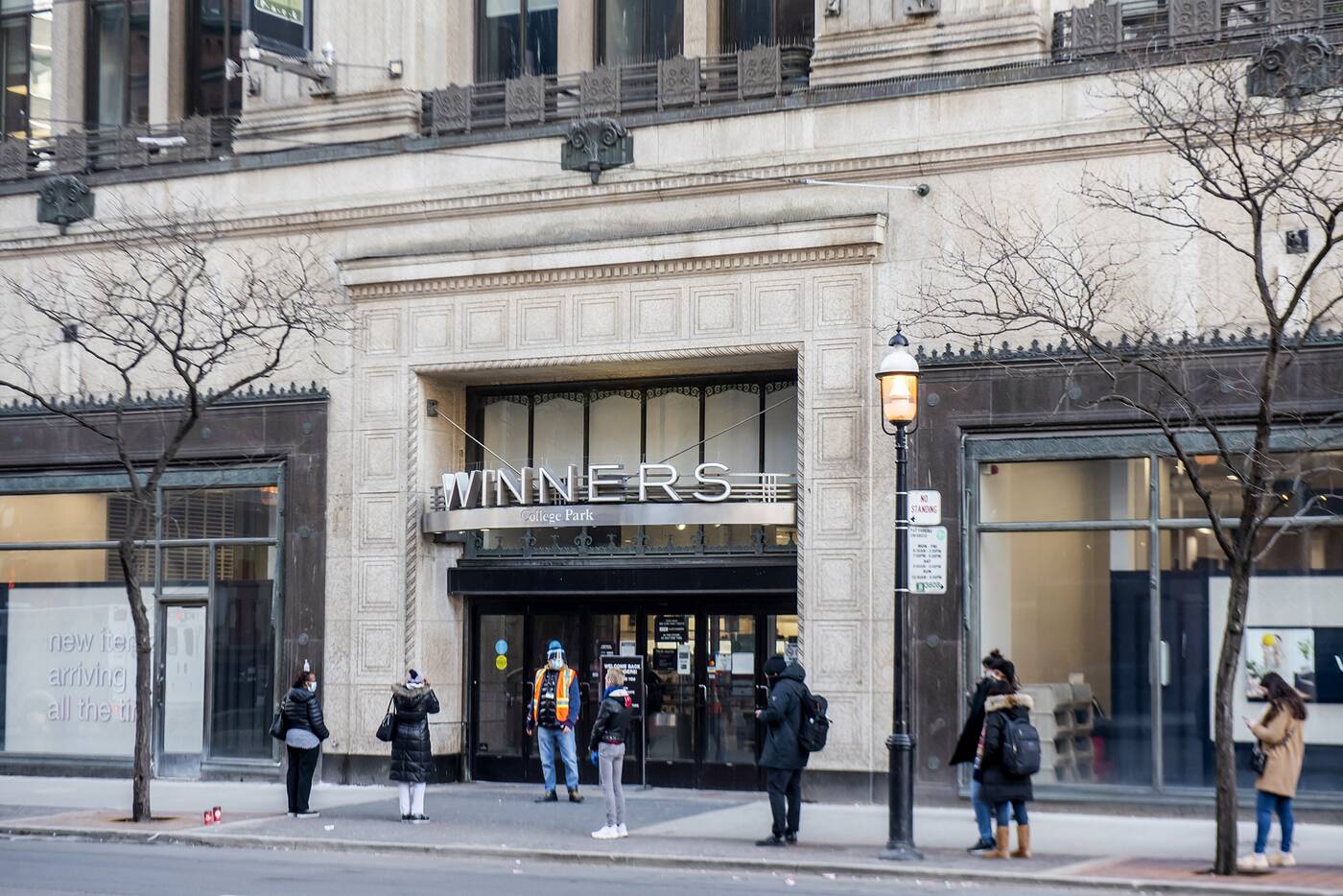 In some cases, it doesn't seem like either have been necessary the entire time to date. 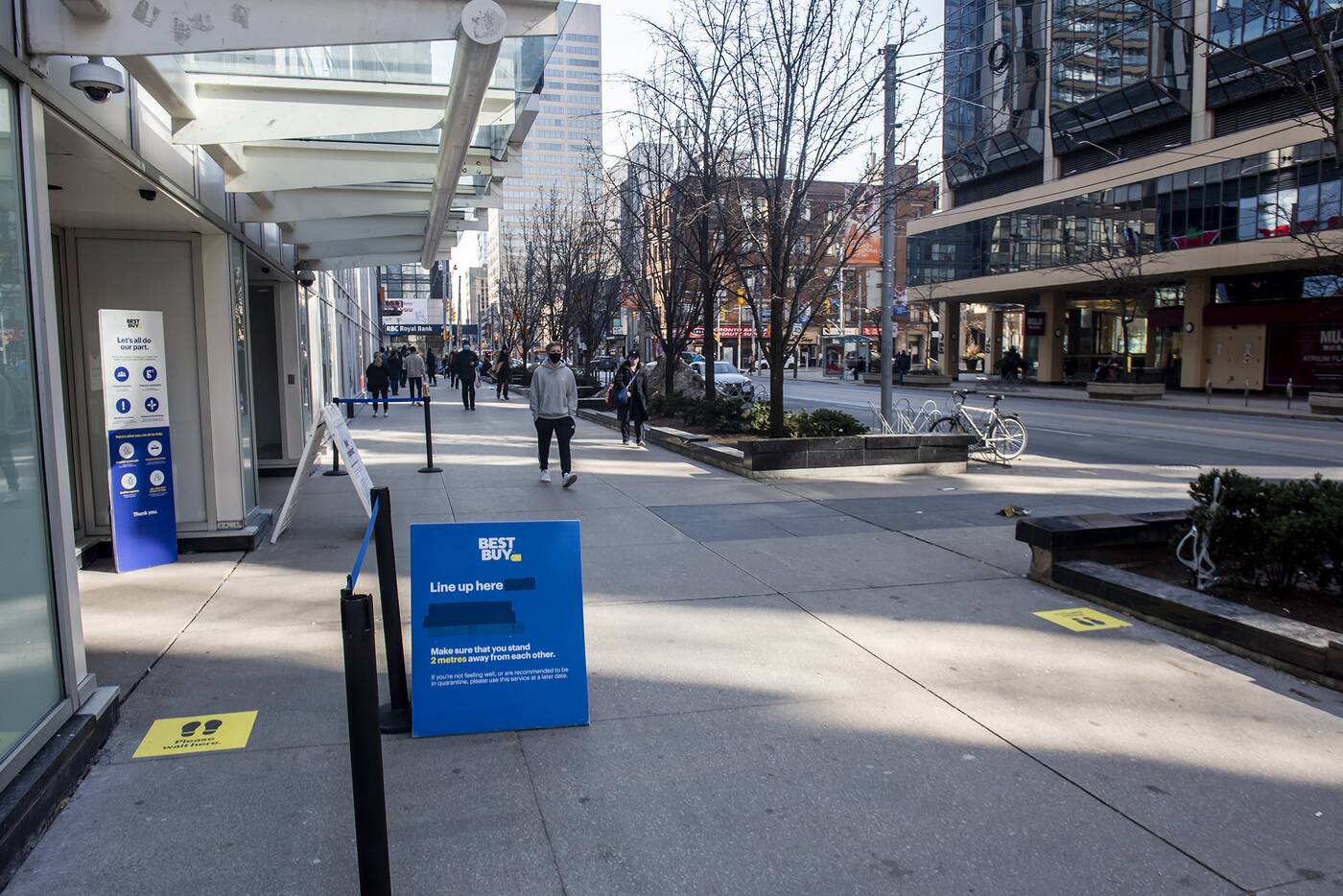 While home decor and discount clothing juggernauts have been bumping since Monday, smaller retailers along the normally-busy Queen West Strip haven't seen the same boom. 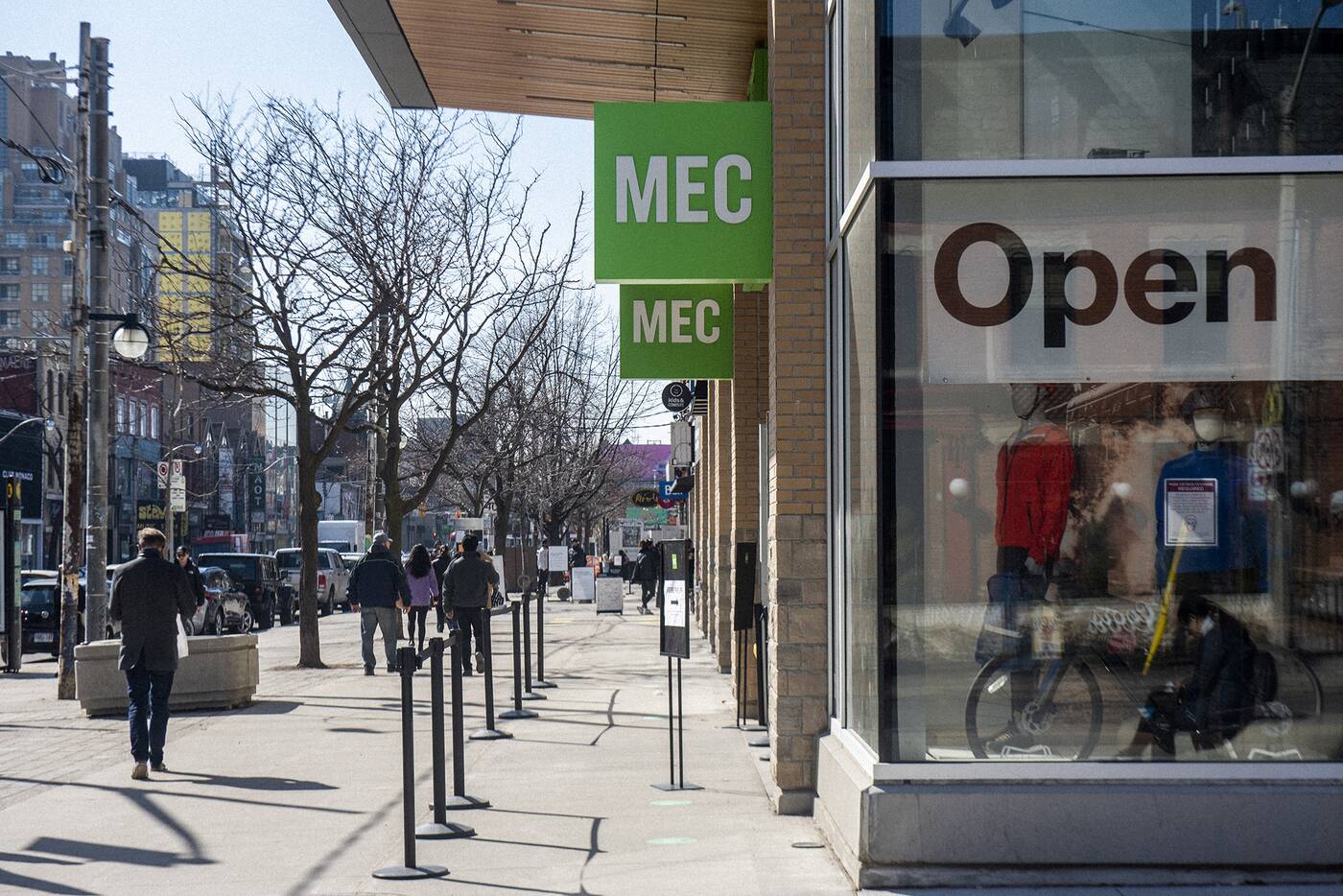 Keep in mind that we haven't even hit the first weekend of (modified) grey-zone living in Toronto yet and that Saturday could spell a different story. 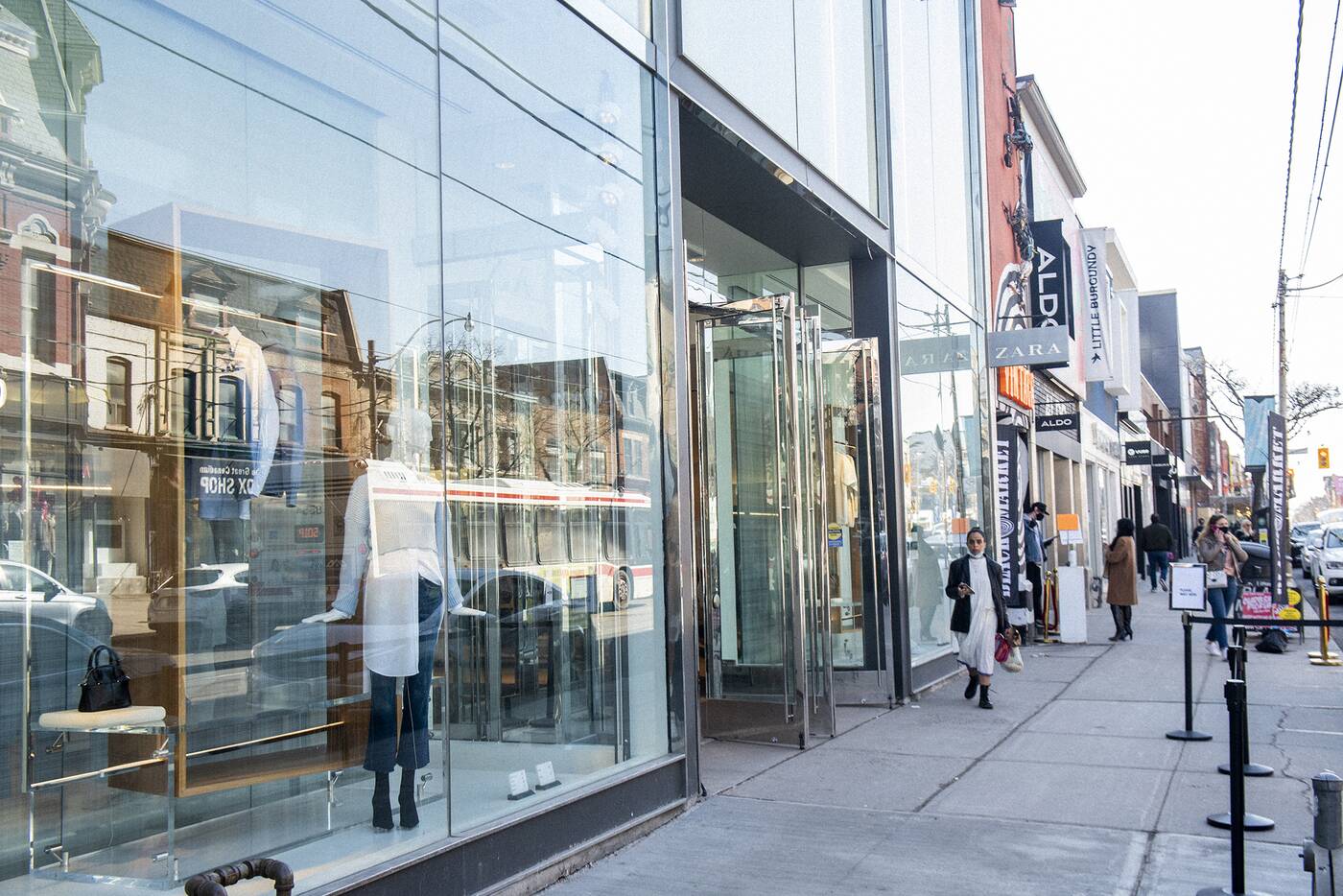 If you do hit the stores for some retail therapy in the coming days, remember to keep in mind that stores still require individuals to maintain at least two metres of physical distance.

Patrons and staff must also wear a face covering at all times (with limited exceptions) indoors. 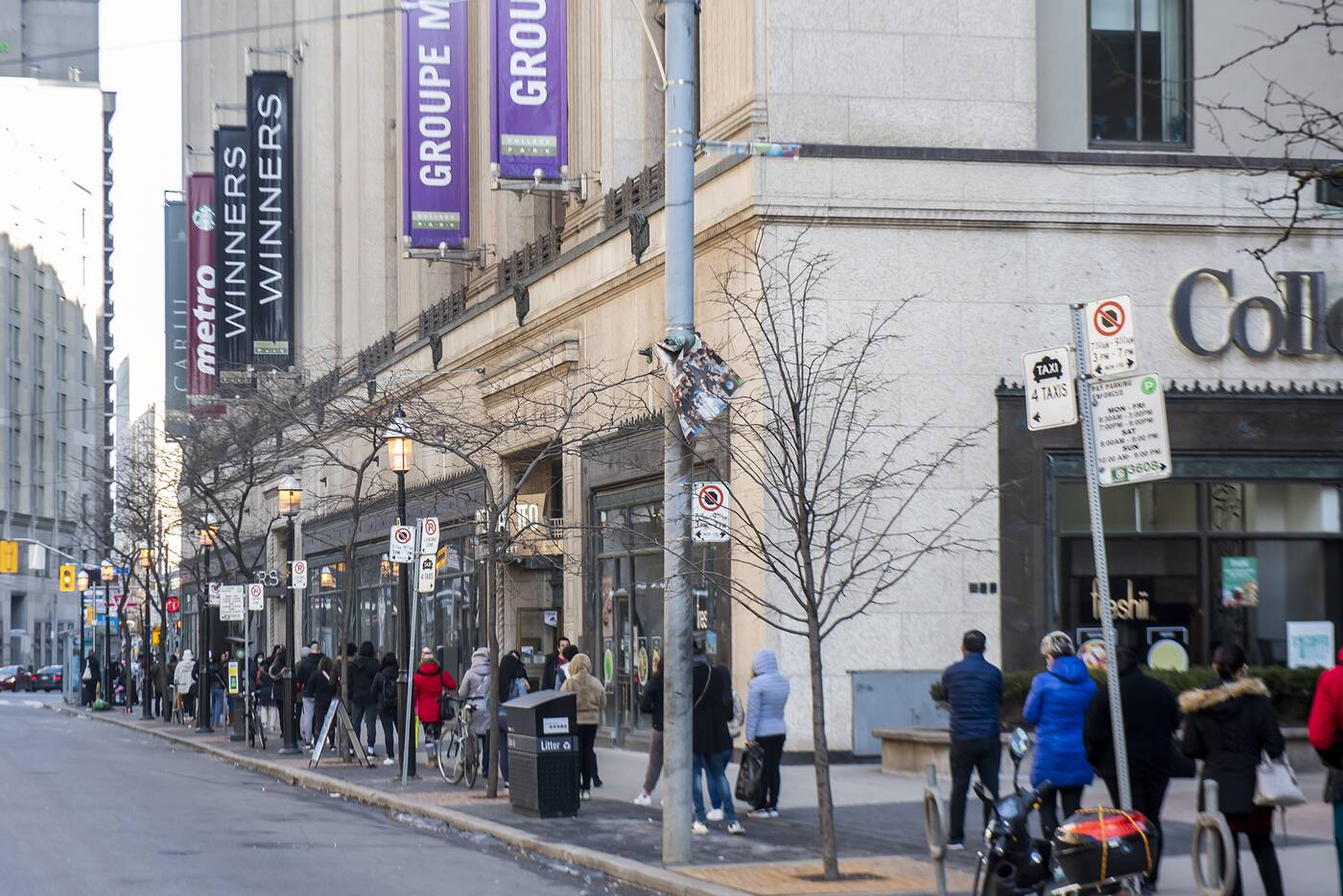 Lastly, Toronto Public Health is still encouraging everyone to stay home whenever possible as new variants of the coronavirus spread.

So, if you don't really need to see that hoodie in person, perhaps consider ordering ahead for curbside pickup instead (the service is still very much available and encouraged all over the city.)