The history of the Walker House Hotel in Toronto

Although I was never inside the old Walker House on Front Street, I remember it quite well.

In the 1950s, when I first received a driving license, I passed by it many times while driving south on University Avenue, en route to the newly constructed Gardiner Expressway.

In that decade, the Walker House was highly popular as it contained several well-known restaurants – Rathskeller, the Franz Josef Room, and on the west side of the hotel, the Swiss Bear. The latter was in a building that resembled a Swiss chalet.

On weekdays, these restaurants were frequented by businessmen, as the hotel was not far from the Financial District.

I had only one personal contact with the hotel, and it was merely with an artefact from it. After the hotel was demolished, its wooden bar was sold, removed, and installed in Crispins Restaurant at Church and Gerrard Street East, in a bar at the rear of the eatery.

I remember being shown the bar. It was about 30 feet long, built of dark-stained wood. It possessed a rich mahogany-like sheen, but it was likely crafted from native wood such as oak or cherry. It would have been impressive in its original location.

The Walker House was completed in 1873, the same year that the Grand Trunk Railway opened its station on the Esplanade, between York and Simcoe Streets.

The Esplanade was constructed on landfill, created by dumping soil and rubble into the harbour south of Front Street. The Walker House was a short distance to the northeast of the station, constructed to accommodate travellers that arrived in the city by train.

In 1873, the hotel advertised that guests would be met at the station and their luggage transported directly to the hotel's lobby.

The Walker House was also constructed on landfill, the slope of York Street on its east side, indicating the lake's original shoreline. However, even when the hotel was erected, the lake had already been pushed further south.

On the hotel's west side there was an alley, and next to it was the Cyclorama. The hotel was well known for having comfortable rooms during the summer months, as it received the cool breezes from the harbour. 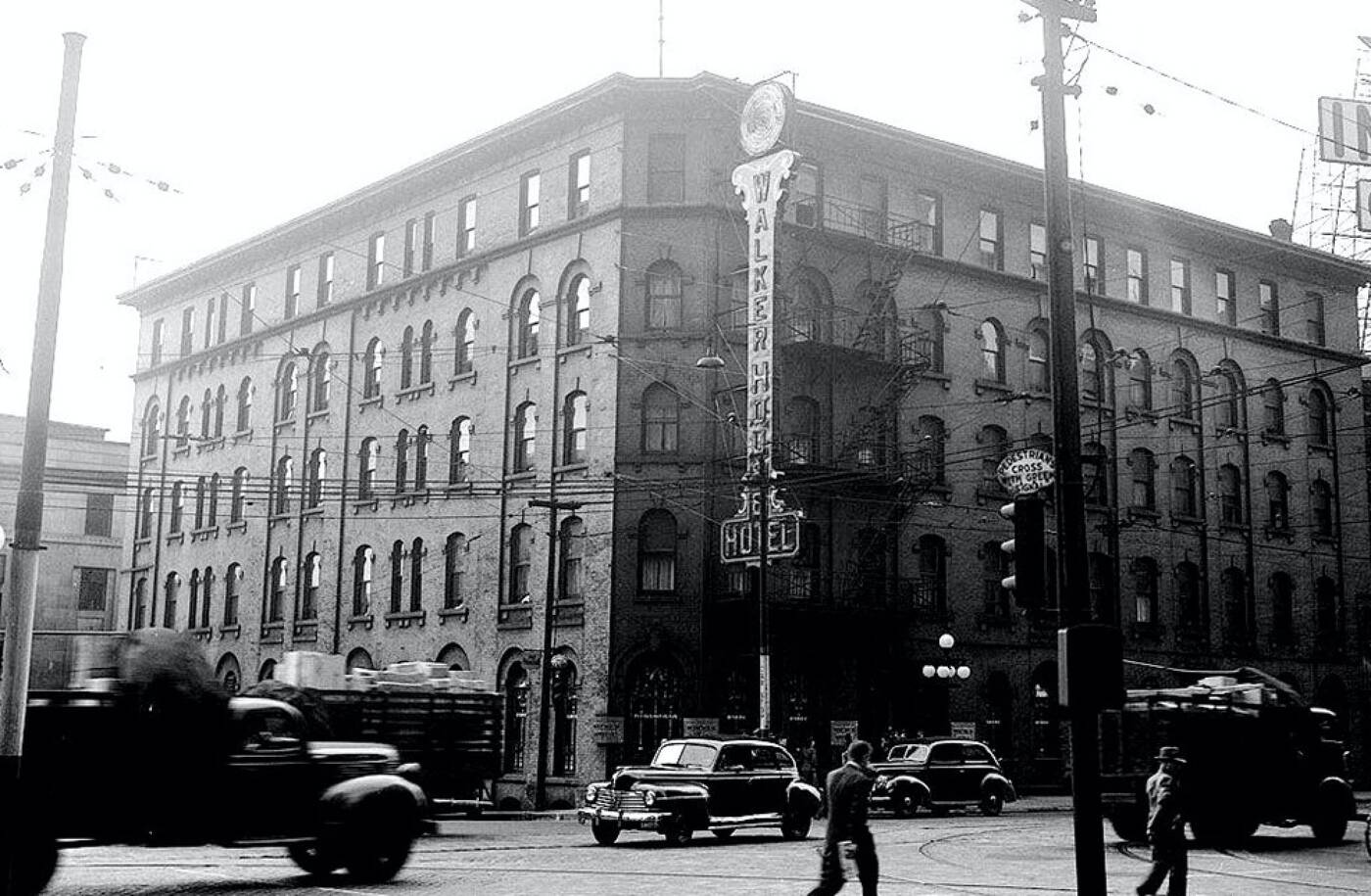 The Walker House in 1945. The view gazes directly at the northeast corner of the rectangular-shaped building.

The four-story Walker House was rectangular in shape, its northeast corner angled so that its entrance faced both Front and York Streets. In 1892, the doorway was relocated to the north side, at 121 Front Street East.

The rooms contained numerous large rectangular windows that provided excellent interior lighting and a view of the harbour. The top of the windows were Roman arches, typical of many 19th-century buildings.

The windows and their surrounds provided texture on the otherwise unornamented brick facades, the cornice at the roofline also unadorned.

The simple rectangular shape of the building allowed corridors on the floors to be straight, with exit stairways at each end. This lessened the possibility of guests being trapped, if a fire occurred.

When the hotel opened in 1873, the proprietor was David Walker, who had worked for many years at the Americana Hotel at Yonge and Front Streets.

Originally, the Walker House contained 125 rooms, which rented for $2 a day. The hotel was enlarged several times, and eventually a fifth storey added.

The establishment was immensely popular, since not only was it near the train station, it was close to the luxury shops on King Street, and the provincial legislative buildings at Front and Simcoe Streets.

The hotel was renown in the latter part of the 19th century for its fine dining room, which seated 170 people. Its New Year's Eve banquets and Christmas-day dinners were always booked well in advance.

The Walker House competed for patrons with the prestigious Queen's Hotel, further east on the north side of Front Street, where the Royal York is today located, and the Rossin House at King and York.

The Walker House was one of the first hostelries to install an elevator and electric call buttons to allow guests to connect with the front office.

However, during the 1970s, the land near the Financial District was among the most coveted real estate in Toronto. Sites were continually being sought by developers to erect low-rise and mid-rise structures.

The Walker House became a casualty of this building boom. It was sold and demolished in 1976, another Toronto landmark from my youth disappearing.

A 19-storey office tower was erected on the site – Citigroup Place – completed in 1983.

Doug Taylor was a teacher, historian, author and artist who wrote extensively about Toronto history on tayloronhistory.com. This article first appeared on his site on August 12, 2016 and has been republished here with the permission of his estate. The article has been modified slightly.