The history of the long lost Cyclorama building in Toronto

Searching through the Toronto Archives while writing about Harry Piper's Front St. zoo I noticed an unusually shaped building lurking in the background of many pictures taken near Union Station. Several stories tall, almost circular, and windowless, the Cyclorama Building stuck out like a sore thumb at its location on Front Street between York and Simcoe streets.

With a name like that you'd be forgiven for thinking the place had something to do with bikes — an old-time velodrome perhaps — but in reality the building had more in common with an art gallery than anything with two wheels. 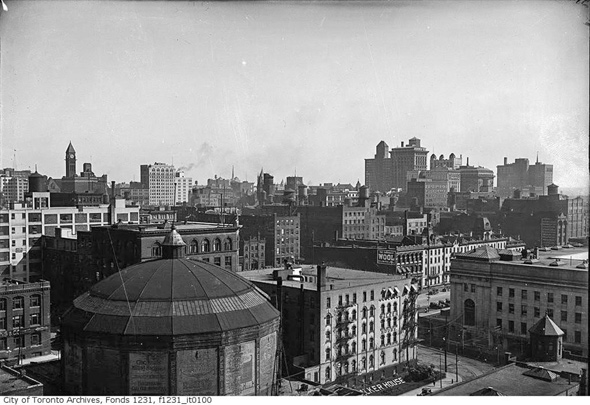 Built in 1887 and owned by Toronto Art Exhibit Co. Ltd., the Cyclorama was the focus of attention even before it was finished. Many passing the site wondered about the sixteen-sided building rising from the ground directly in front of Old Union Station. On the 12th September that year the first guests payed the 25-cent admission fee and ventured inside. Hanging floor-to-ceiling on all sides of the building were giant oil paintings depicting the Battle of Sedan, a decisive conflict in the Franco-Prussian war of the 1870s.

The paintings were joined to provide a full panorama from the viewing platform in the centre of the room and the perspective was carefully calculated to make it appear as though the viewer was really looking out over the scene. Actors played out the roles of soldiers in the foreground, providing sound effects and sometimes smoke to add mood. Toronto Illustrated, a promotional booklet for the city printed in 1893, cooed about the "vivid and life-like" image quality of the paintings, the work of Austrian landscape painter August LÃ¶hr.

Cycloramas were a popular attraction in major European and North American cities in the latter part of the 19th century. Often showing important historical battle scenes, the touring installations would hang for several months at a time. Toronto's Cyclorama featured only a handful of exhibits in its time: the Battle of Sedan, Battle of Gettysburg, Battle of Waterloo and Jerusalem on the Day of the Crucifixion, but maintained a dedicated following.

A reporter from the Toronto Daily Mail smitten with the "striking groups and striking incidents" in the Battle of Sedan installation described one panel showing a pair of mounted German officers, one fatally wounded, riding toward the viewer. "The figures stand out boldly; the horses will be upon you in a minute; the nerveless, swaying movement of the wounded man contrasts dramatically, yet naturally, with the strength, determination and martial acts of his generous comrade." 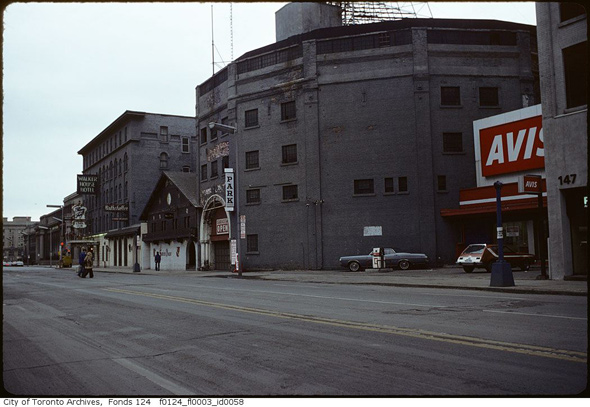 Despite its popularity, the Cyclorama ran into financial trouble as the new century approached and silent movies entered theatres. The city seized the property to recover tax arrears before the end of the 1890s. Plans to turn the building into a boxing venue or swimming pool were put forward but never realized. Instead, Petrie Machinery purchased the vacant building from the city and converted it into a showroom.

The building was altered in the 1920s for use as a parking garage for the newly constructed Royal York Hotel located just a block away. Elgin Motors took over the property in the 40s and used it as a showroom for several years. Finally, back in use as a parking garage for Avis car rentals, the building was demolished along with the Walker House Hotel in 1976 to make way for the Citigroup Place building that occupies the location today.

Photos from the Toronto Archives, Ontario Archives and Toronto Illustrated