The history of SickKids hospital in Toronto

SickKids hospital has been treating children and young people in Toronto for over a century. What started out as six iron cots has grown to be an internationally recognized medical institution. 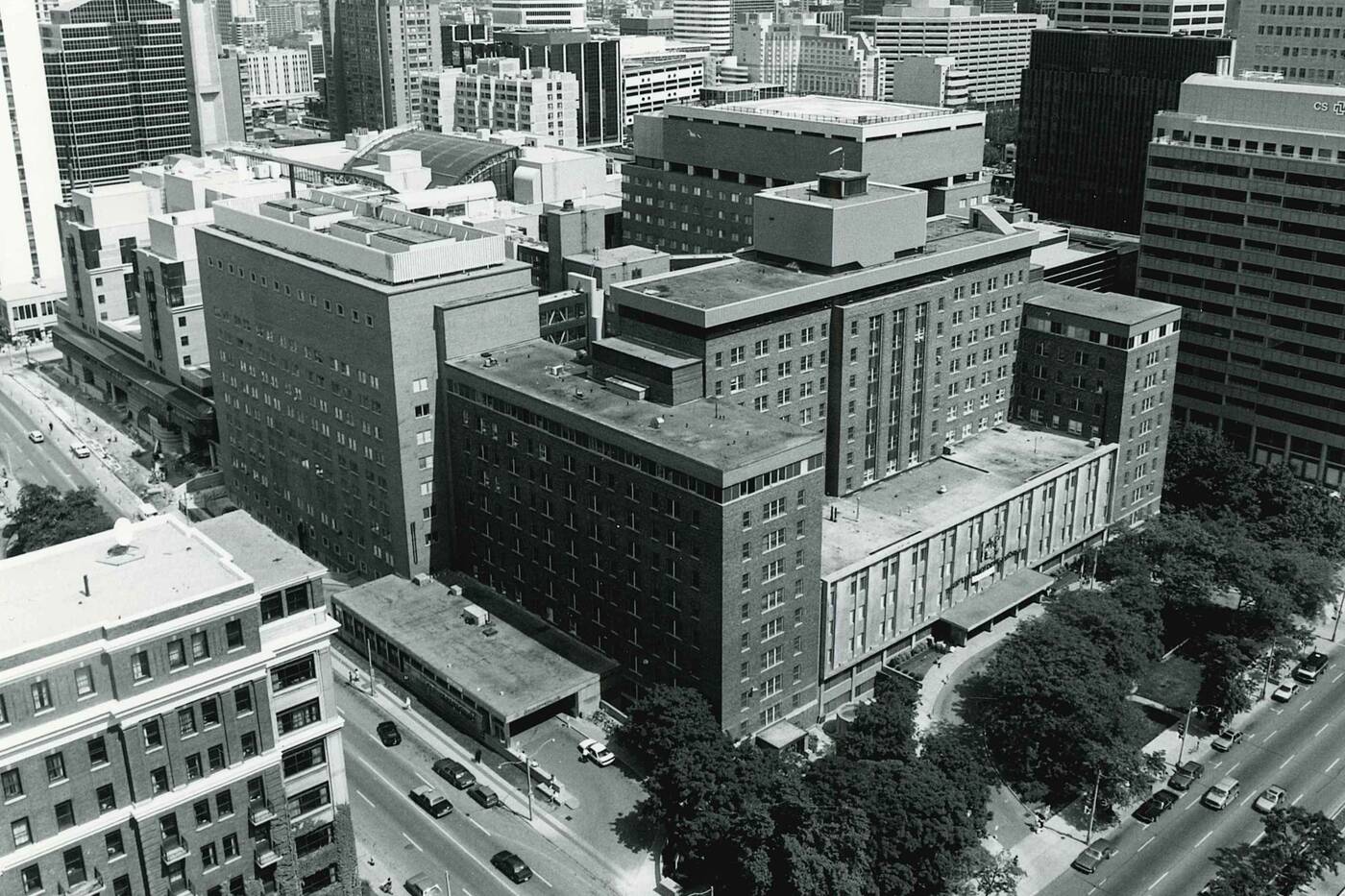 Located on Toronto's Hospital Row, the building is ever-expanding and has become a Toronto landmark. For some, it's the place they were born, for others it's where they spent some of the hardest days of their life.

It started out as six iron cots

None of it would have been possible without a woman by the name of Elizabeth McMaster. With a background in medicine, she recognized that there was a significant gap in healthcare targeting Toronto's young children. 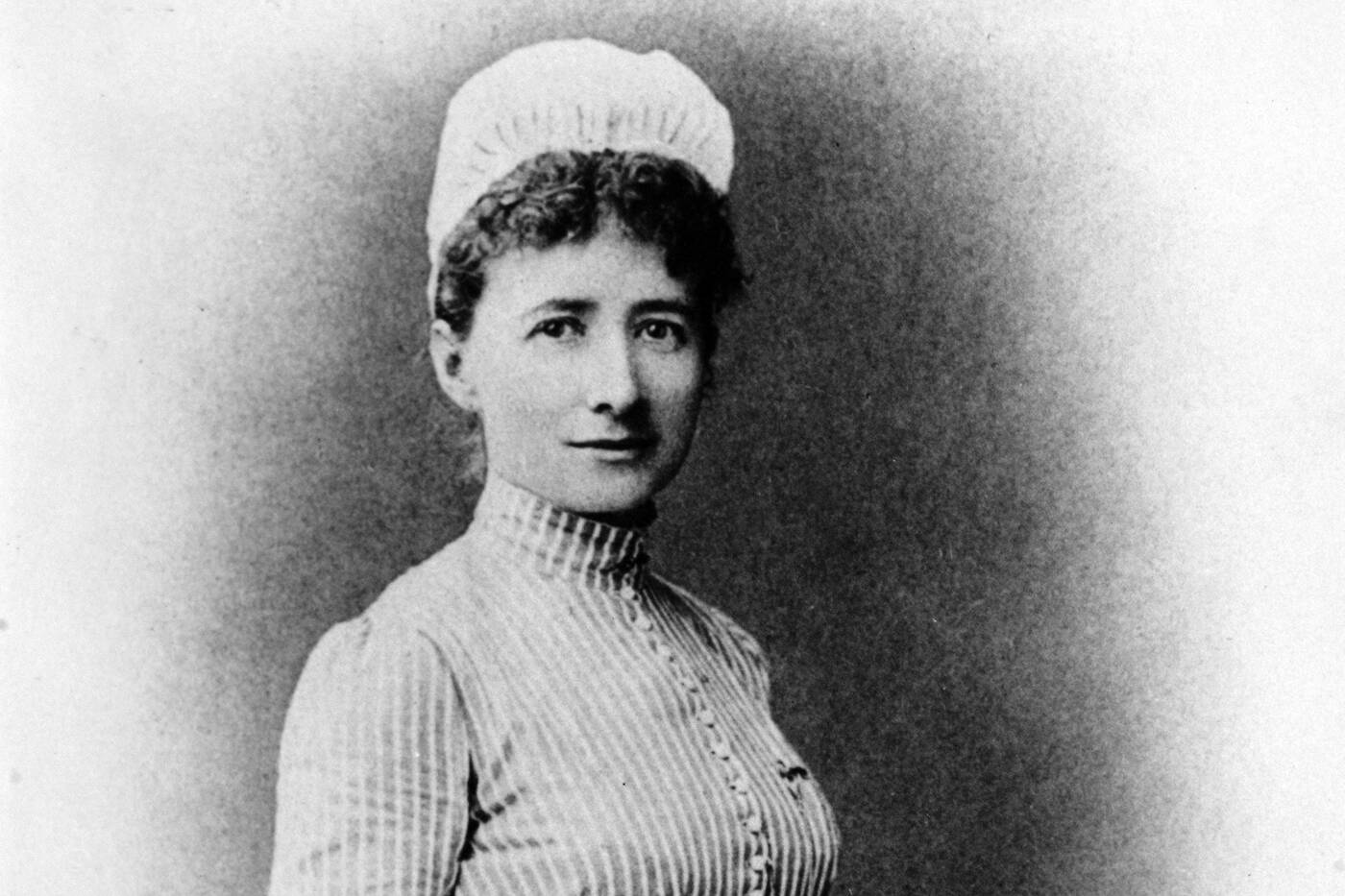 The only known image of Elizabeth McMaster as an adult in the 1890s. Photo by Hospital Archives, The Hospital for Sick Children, Toronto.

According to SickKids Foundation, McMaster, along with a group of women known as the Ladies Committee, raised money to rent a space "for the admission and treatment of all sick children."

"By March 1875, sufficient donations had been received to rent a row house and celebrate the formal opening of the hospital, despite the fact that it did not yet have any patients," according to David Wright's SickKids: The History of the Hospital for Sick Children. 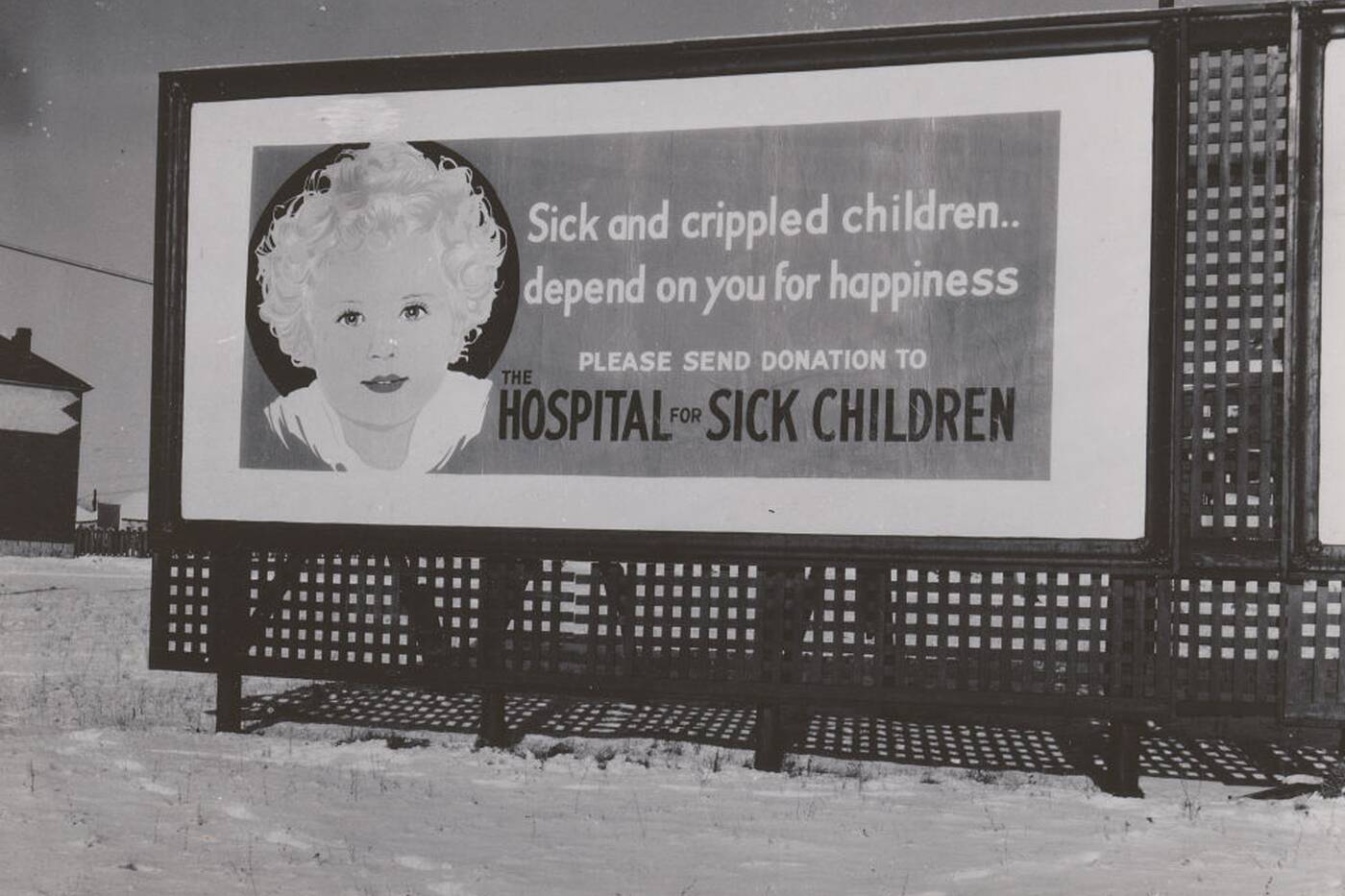 A billboard advertising The Hospital for Sick Children in the 1930s. Photo by Toronto Digital Archives.

The house they rented, located at 31 Avenue Street, had only six iron cots.

As Toronto grew, so did the need for a bigger hospital

On April 3, 1875, a 3-year-old scald victim named Maggie became the first official patient treated there. According to Wright, the hospital had 44 inpatients in the following year.

In 1876, the demand for care was so great that they moved to a bigger house located on Seaton Street near Dundas and Sherbourne. Even in these early years, the hospital relied on donations from the public. 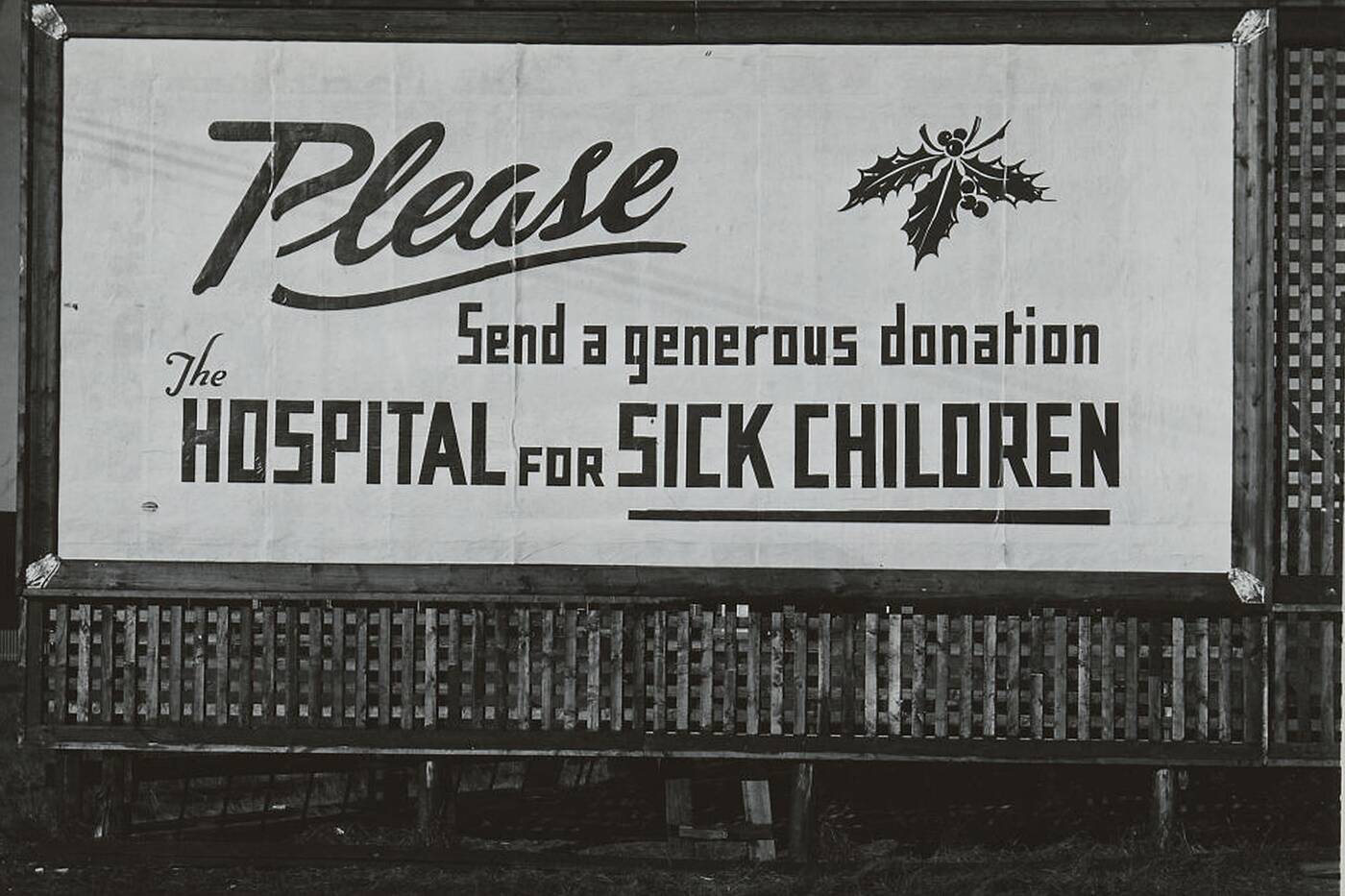 SickKids raised money with the help of advertisements in the 1930s. Photo by Toronto Digital Archives.

"The founders of the proposed hospital set themselves apart from other institutions by adopting a principle of relying on voluntary donations rather than making direct public and individual appeals for money," Wright says in his book.

John Ross Robertson, a journalist and philanthropist, was also a primary benefactor of The Hospital for Sick Children. Over his lifetime, he donated over half a million dollars to the hospital. 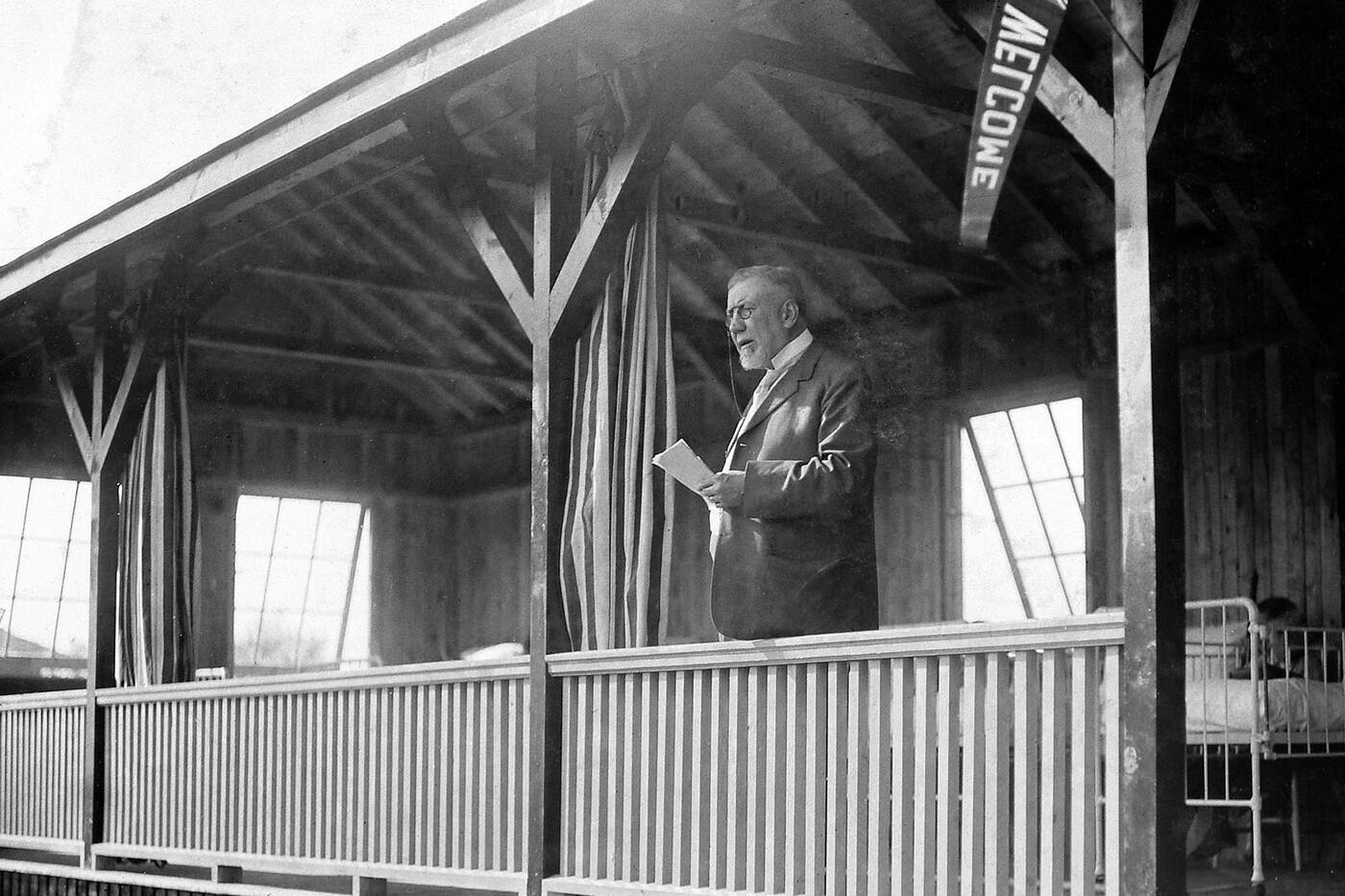 John Ross Robertson speaking at the opening of the tuberculosis pavilion in 1910. Photo by Hospital Archives, The Hospital for Sick Children, Toronto.

When The Ladies Committee relinquished control to a board of trustees in 1891, Robertson took the role of chairman.

By 1892, Toronto was developing quickly and the growing need for children's medical care was once again not being satisfied. 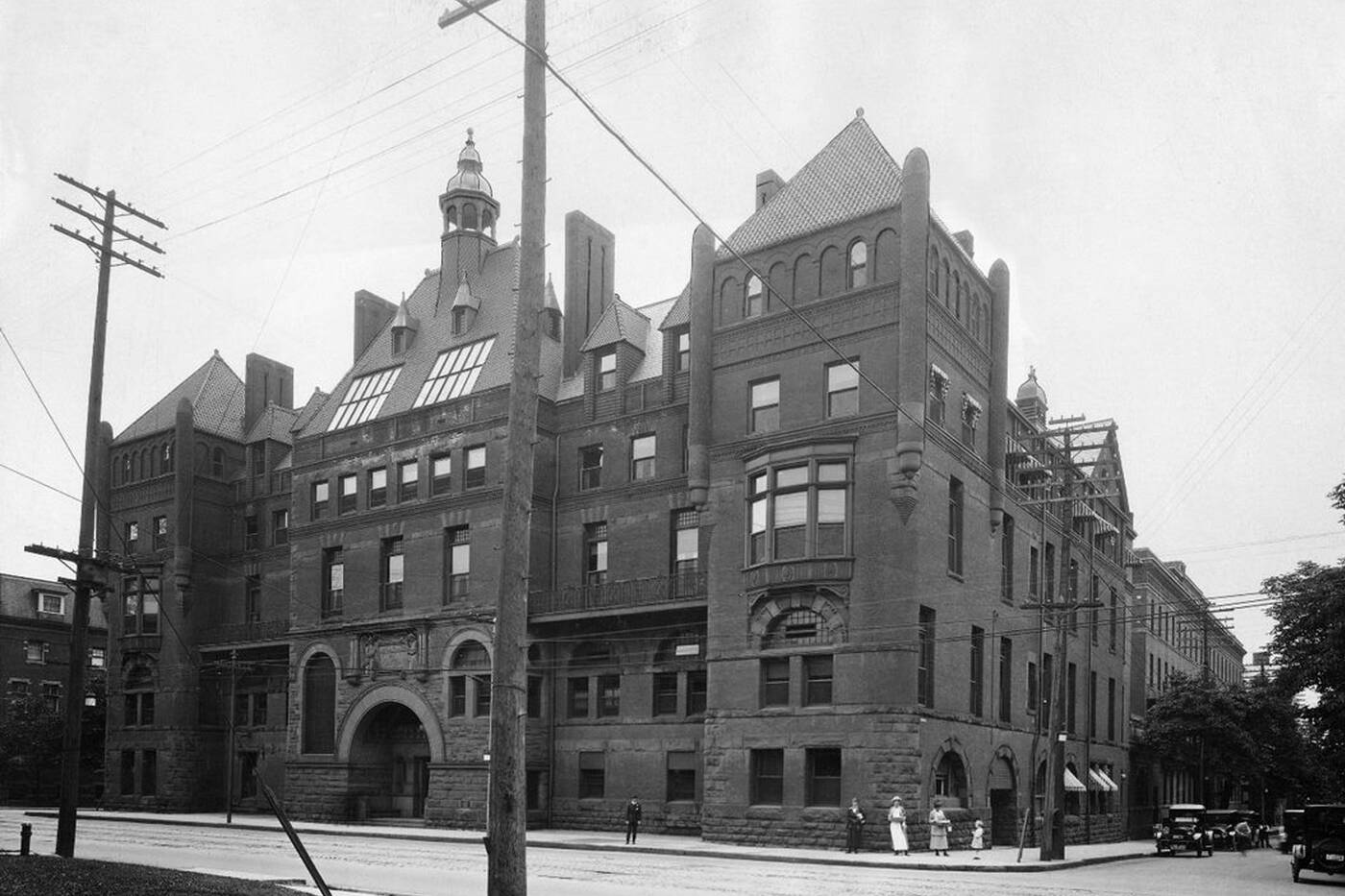 This led Robertson to help relocate the hospital to a four-storey building at 67 College Street, where the building has survived, complete with the words "Victoria Hospital for Sick Children" in stone above the main entrance. That building had enough room for 320 beds. 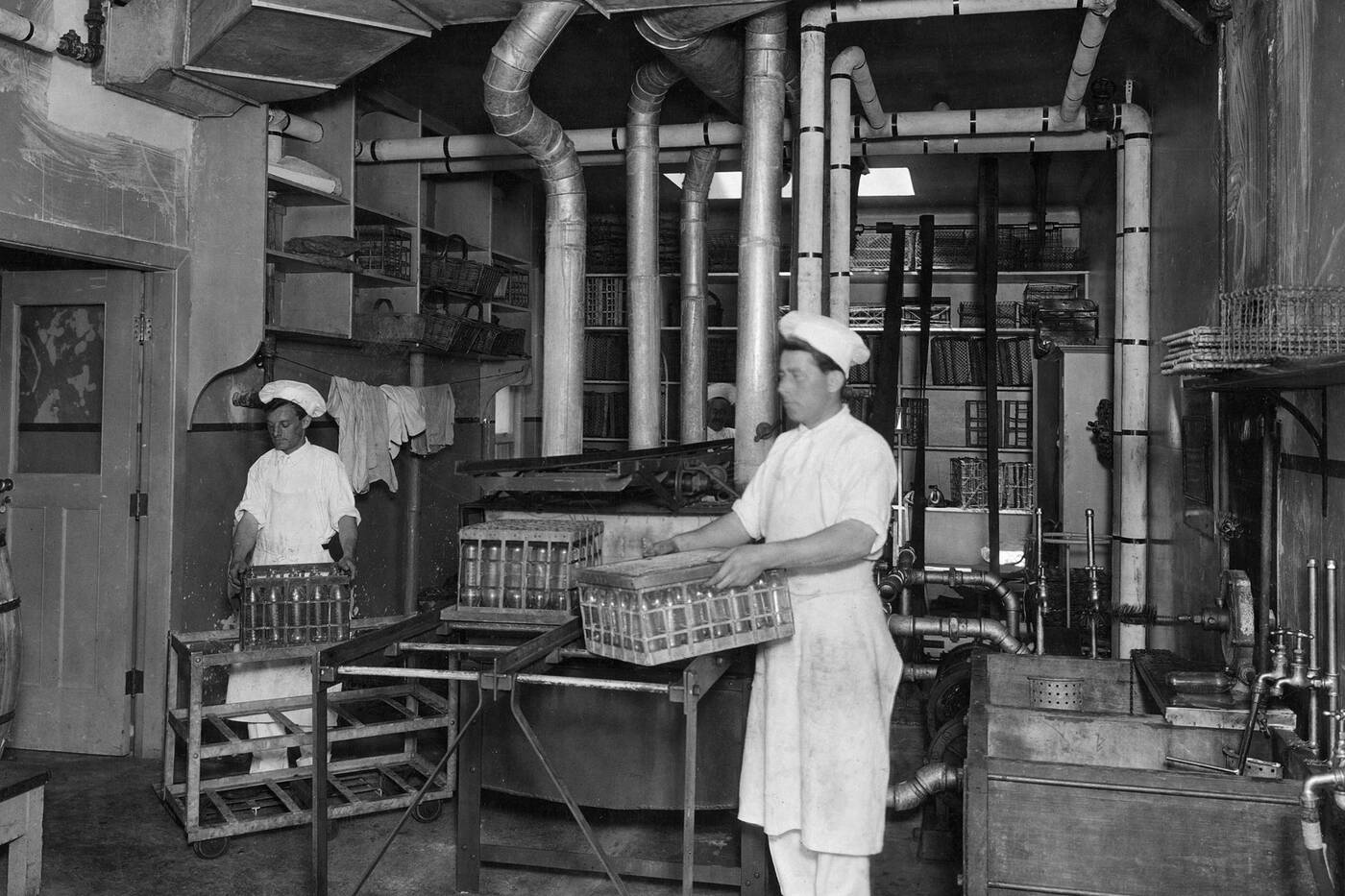 While this was one of the first big developments, it was far from the last. SickKids Foundation notes that in the following years the hospital was responsible for pioneering blood transfusions for children and inventing a nutrient-enriched and for many decades ubiquitous cereal for infants called Pablum. 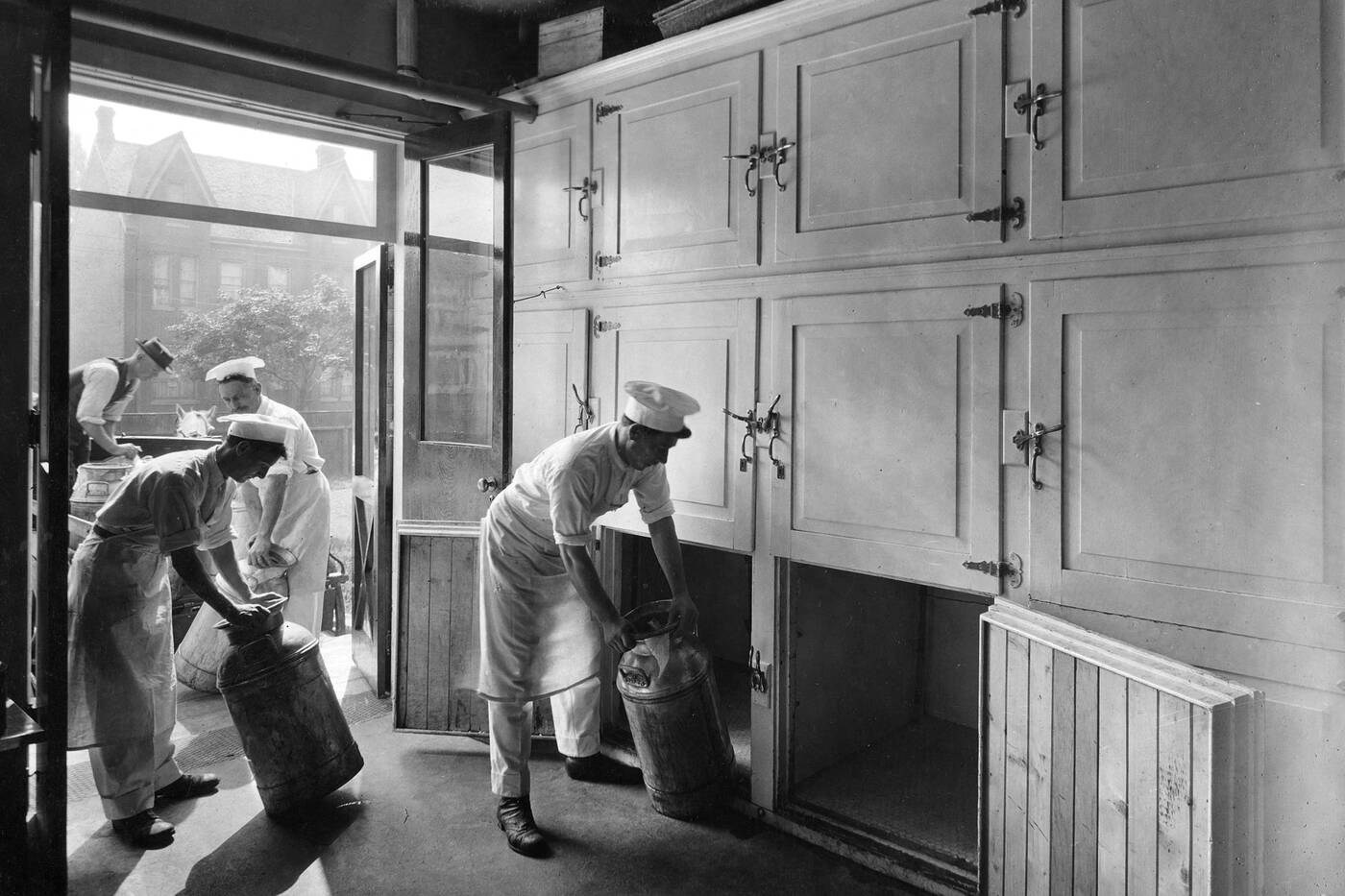 In 1937, the hospital was hit by the North American poliomyelitis epidemic. At the time, SickKids was home to the only "iron lung" machine in Canada.

This tool could artificially expand and contract a child's lungs. Over the course of the epidemic, the hospital staff were able to manufacture 30 more iron lungs.

The hospital was relocated to University Avenue in 1951

All of these triumphs and more occurred at the hospital's College Street location. However, by the middle of the 20th century, it became clear that the building would no longer suffice. 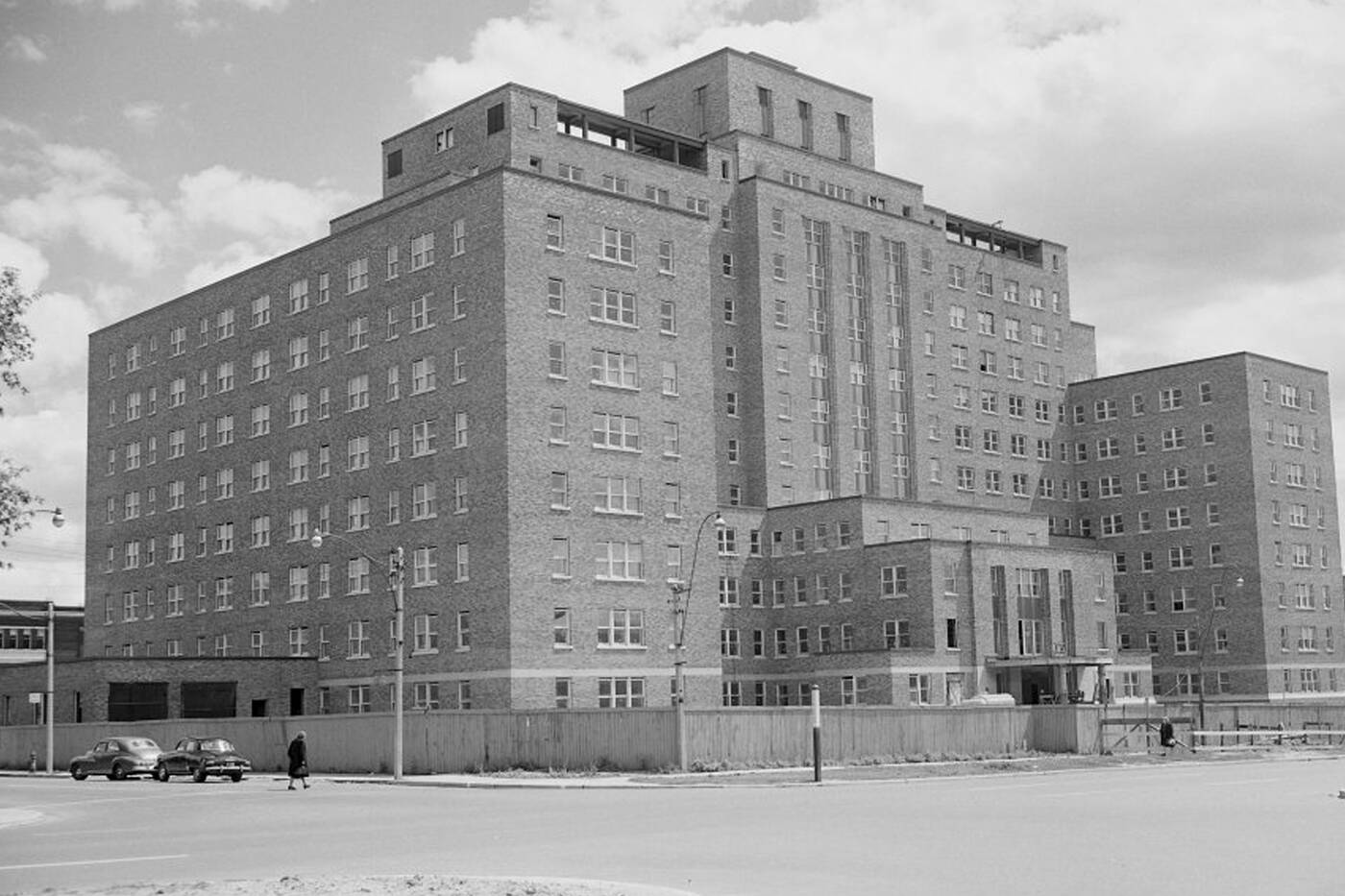 SickKids, located on University Avenue, in the 1950s. Photo by Toronto Digital Archives.

According to the SickKids website, on February 4, 1951, the hospital moved to its current location at 555 University Avenue. This was previously the location of silent-era actor and studio executive Mary Pickford's childhood home. 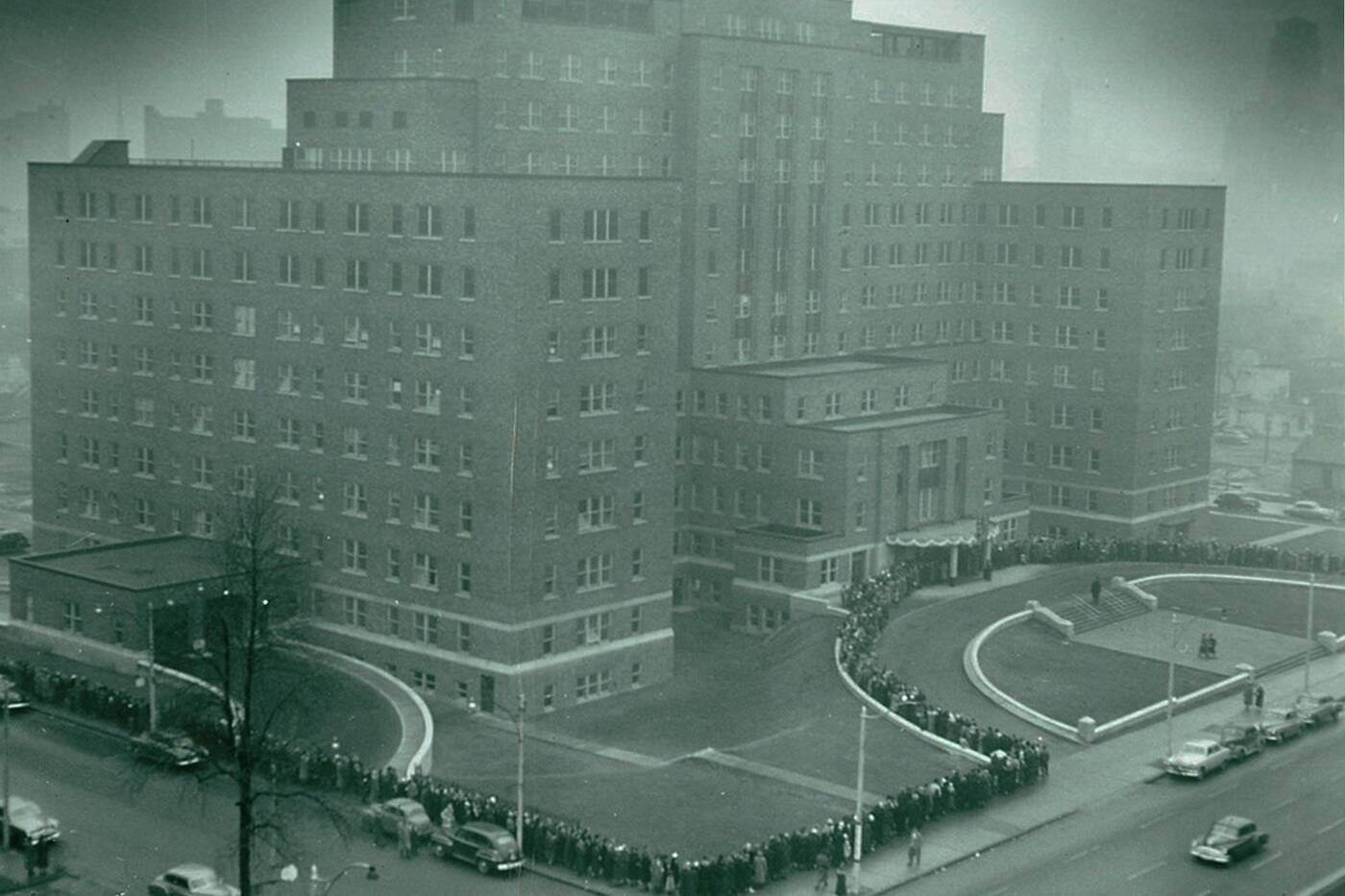 Crowds of people gathered around SickKids to take public tours of the hospital in 1951. Photo by Hospital Archives, The Hospital for Sick Children, Toronto.

The hospital on University Avenue was where such pioneering surgical developments as the Salter operation for dislocated hips and the Mustard operation for heart defects were engineered.

While it would be impossible to note all of the innovations made during these years in this article, the Pediatric Intensive Care Unit was a big one. Opened in 1968, the PICU was one of the first of its kind in North America.

SickKids Foundation was founded in the 1970s

By the 1970s, the hospital was taking on more and more complicated cases. This meant that more money was needed, and more fundraising had to be done.

This led to the establishment of SickKids Foundation, the hospital's fundraising arm, which according to its website is now "the largest charitable funder of child health research in Canada," with 232,000 donors. 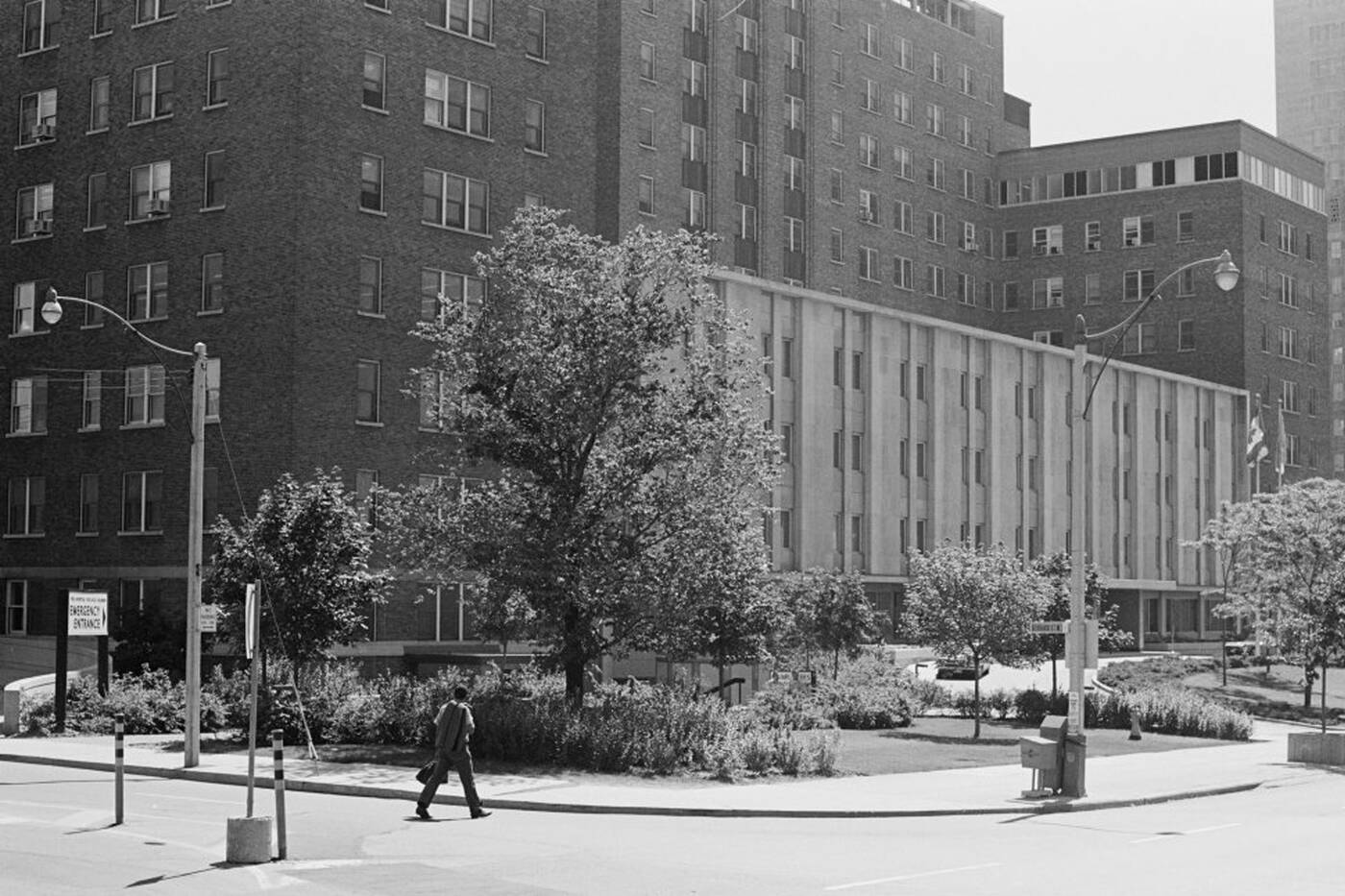 It was with this new system in place that the hospital was able to get enough funding for the medical breakthroughs that followed.

It was also in the 1970s that SickKids got a rooftop helipad. To this day SickKids is one of only three hospitals in Toronto that has one.

The next decades saw even more progress with Canada's first bone-marrow transplant program, the discovery of the cystic fibrosis gene and the world's first cardio surgery in utero. 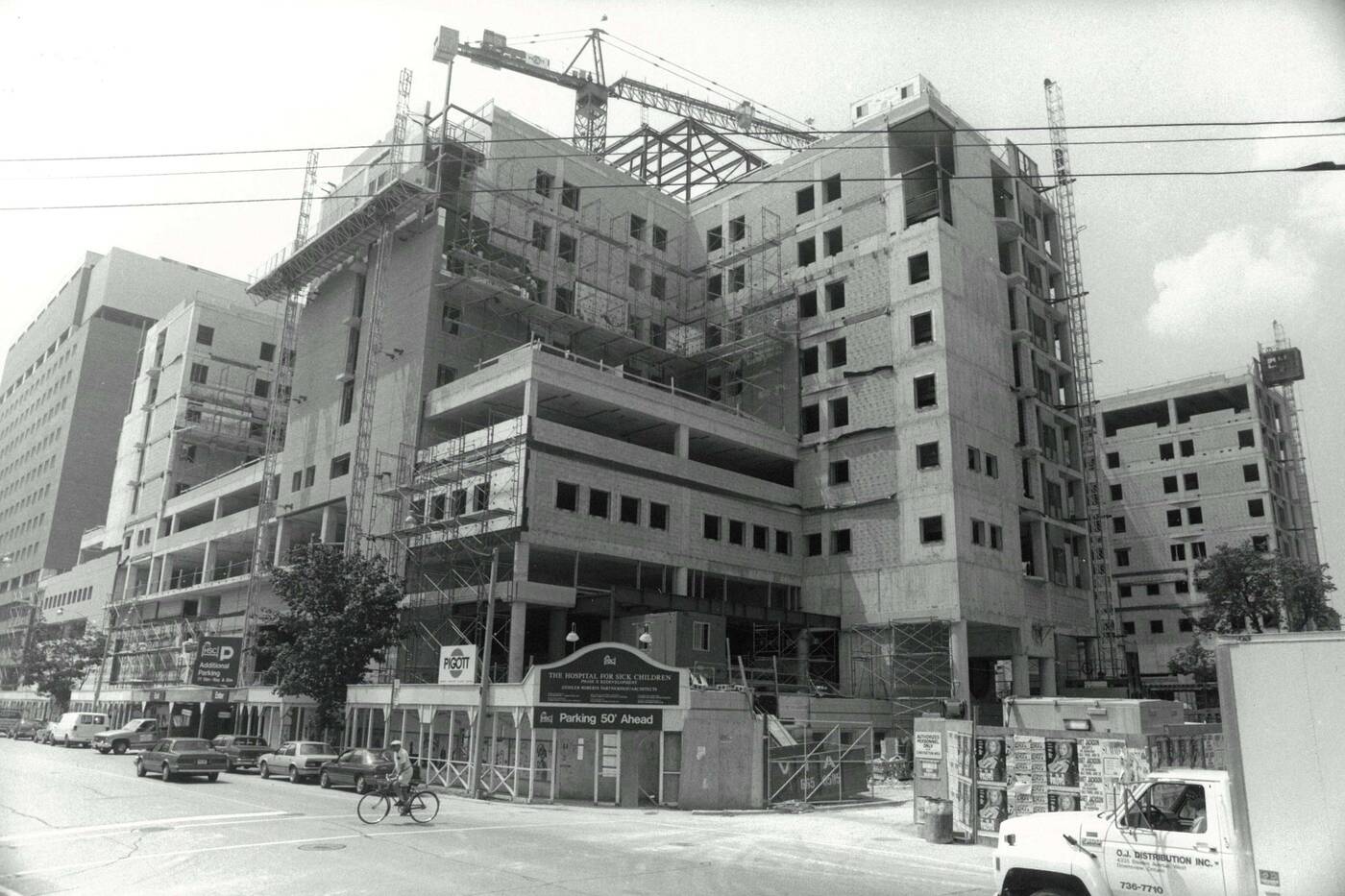 The construction of the SickKids building extension.Photo by Hospital Archives, The Hospital for Sick Children, Toronto.

These procedures came a long way from the treatment Maggie received over a century earlier. In 1993, the Atrium, a patient-care wing, was opened.

The building, which included a glass roof, was designed by Toronto architecture firm Zeidler Architecture Inc. This design has gained international attention for its incorporation of sunlight to aid in healing. 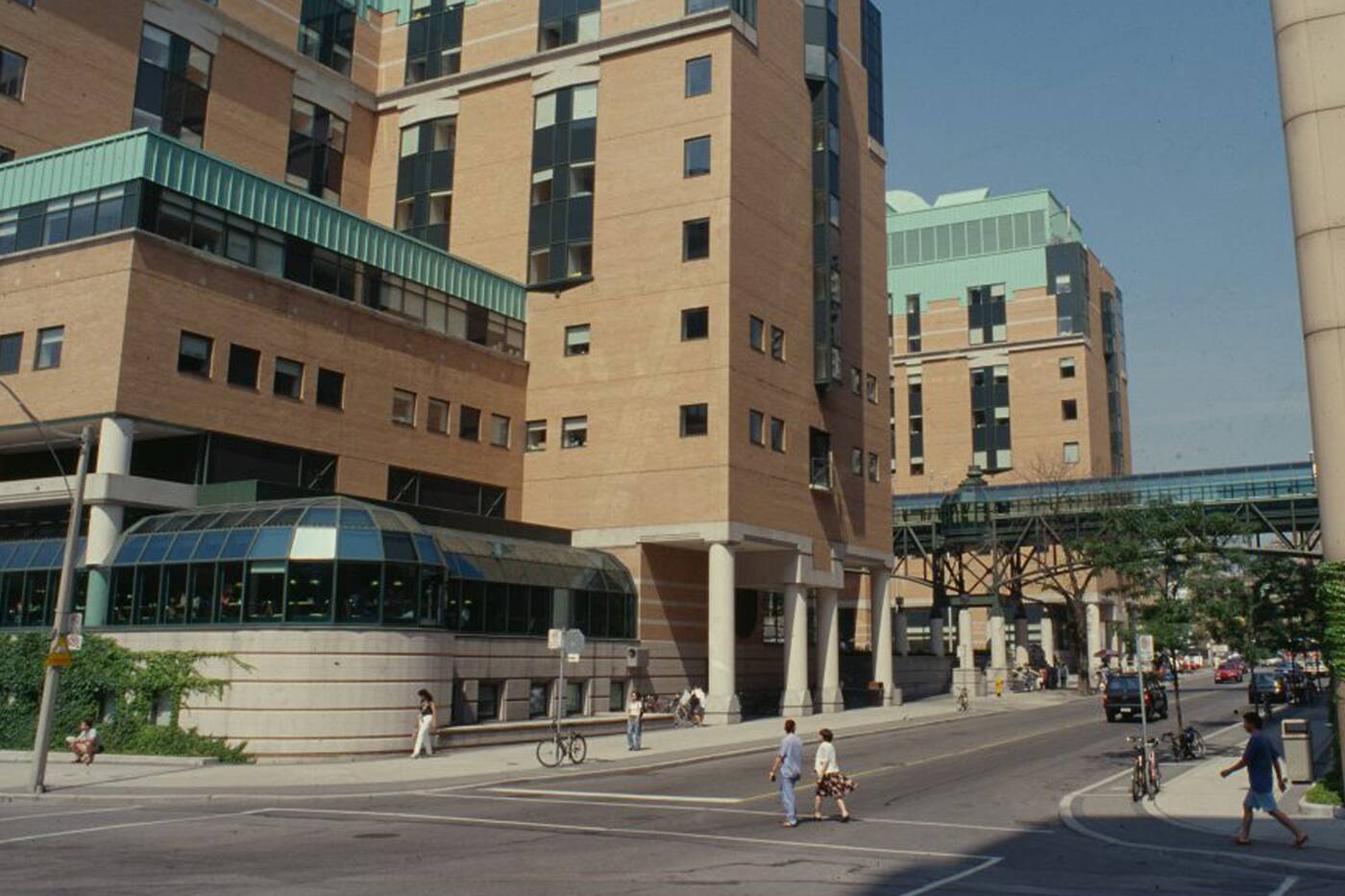 A look at SickKids hospital from Elm Street in the 1990s. Photo by Toronto Digital Archives.

Despite all of its contributions to the medical community, SickKids was caught in the Motherisk scandal.

From 2005 to 2015, the Motherisk Drug Testing Laboratory (MDTL), which was housed by SickKids, tested 16,000 hair samples to back up allegations of substance abuse in thousands of child protection cases.

It was later determined that neither Gideon Koren, the lab's clinical toxicologist, nor the staff, were qualified to do forensic testing. This meant that 16,000 child protection cases were put into doubt.

According to the CBC, Susan Lang, a Retired Ontario Appeal Court judge, completed an exhaustive review of the laboratory. In her report, she wrote that SickKids failed to exercise meaningful oversight over MDTL's work. 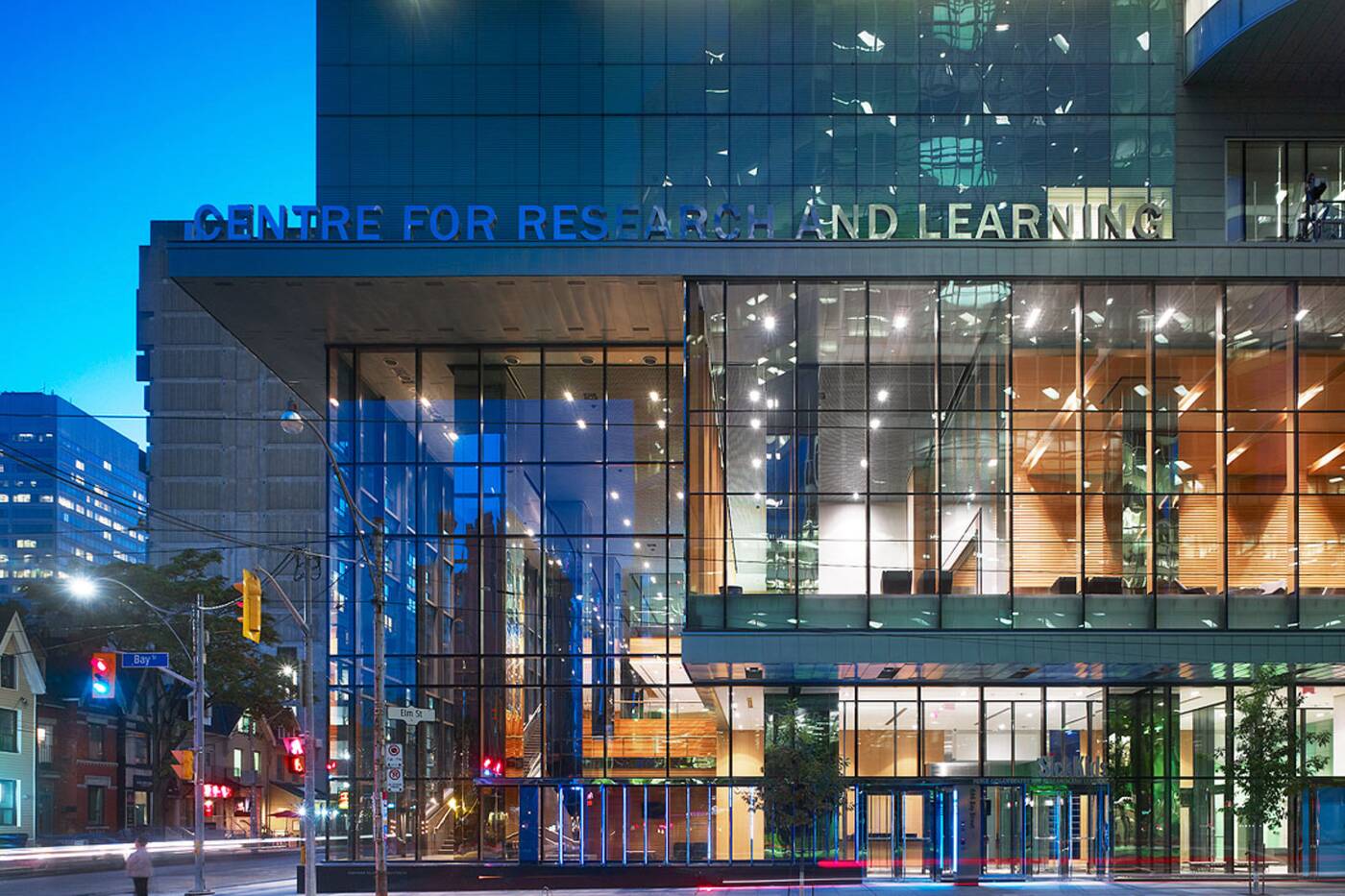 The Peter Gilgan Centre for Research and Learning is a 21-storey building. Photo by SickKids.

While this scandal shed some negative light on the hospital, it was far from the only publicity they were getting.

The opening of the Peter Gilgan Centre for Research and Learning garnered lots of attention in 2013. The 21-storey building was created to further the hospital's devotion to children's health research.

SickKids continues to thrive in research

Since 2016, the hospital has taken the second spot for Canada's top 40 research hospitals, according to Research Infosource.

Also staying true to its roots, SickKids never stopped fundraising, launching their SickKids VS Limits fundraising campaign in 2018, with a goal of $1.3 billion dollars. It's even gotten into the raffle business, with their popular SickKids Catch the Ace weekly draw. 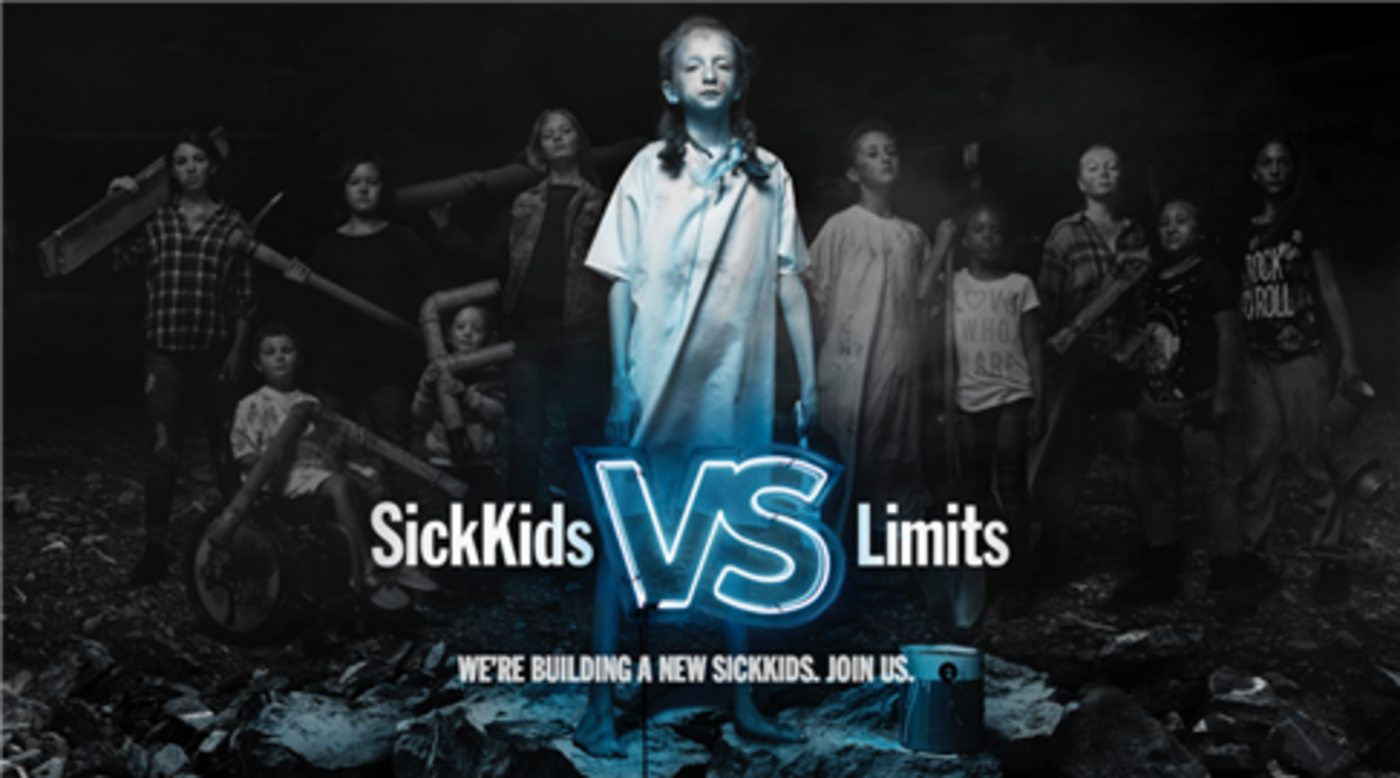 A poster from the SickKids VS Limits campaign in the 2010s. Photo by SickKids Foundation.

According to the foundation, they received $100 million dollars from the Peter Gilgan Foundation in June of 2019, the largest gift in the hospital's history.

These funds are all going towards SickKids' campus redevelopment project, which includes a new patient support centre that will serve as an education, training and administrative hub. The 22-storey building is expected to open in late 2022.

Despite its ups and downs, SickKids has grown into an internationally respected hospital. It's provided care for children for over a century and its contributions have made it one of Toronto's most famous institutions.