Couples in Toronto have been finding all kinds of original ways to get married during the pandemic, but some are choosing to do it during the winter in the freezing cold by the lake in order to get some majestic photos.

For Inta Dukule and her now-husband, who just got married at Prince of Wales Park in Etobicoke, it was as much about spontanaeity as it was about the beautiful surroundings.

"We both love outdoors and love Toronto, and since you can't get married in the City Hall due to pandemic, we wanted to do it outdoors by the lake. We chose Prince of Wales Park because it is so close to the lake and there is a beautiful view of Toronto downtown," Dukule told blogTO.

They're not the only ones to feel this way: a recent post in a neighbourhood Facebook group showed photos of another brave couple getting married at Woodbine Beach.

As for Dukule and her husband Pavels, they decided to combine the idea of an intimate outdoor wedding with a virtual celebration. 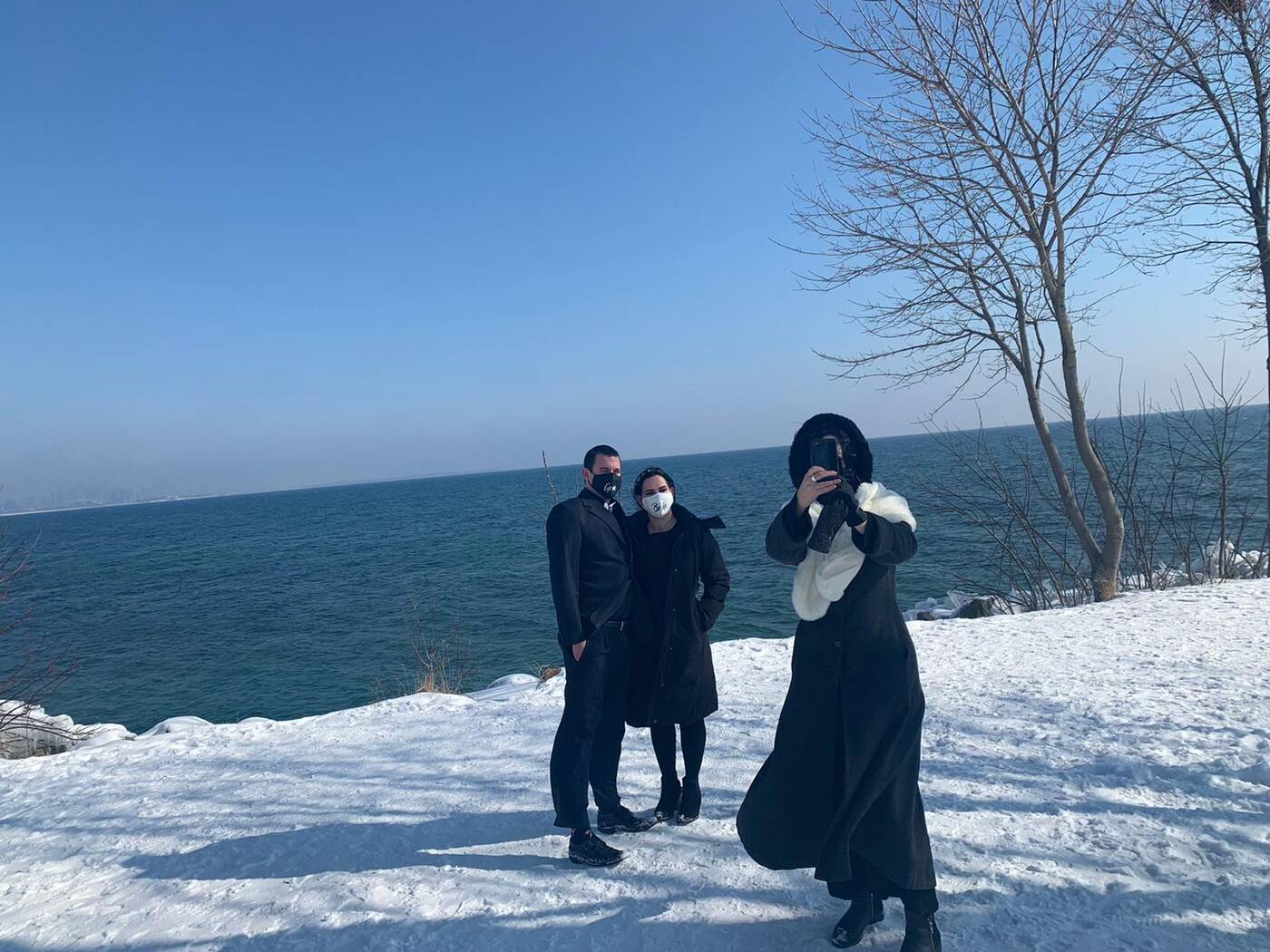 The lakefront provides a beautiful winter backdrop for a distanced wedding. Photo courtesy of Inta Dukule.

"Originally we thought that it would be nice to get married in summer and have a bigger wedding with friends and family. However, with the ongoing pandemic it would still be impossible, given all the restrictions in place, especially air travel, and both of our families live in Europe," says Dukule.

"Then we decided that there is no better time than present and despite everything, love is not cancelled. When we announced our engagement, everyone was wishing us well but also saying that they wish they could somehow be there and that's when the idea of Facebook Live came about."

In a way, it worked out well as their guests didn't have to freeze out in the cold with them, and apparently had just as much fun as they normally would have with none of the hassle.

"We created a group and invited all our friends and family worldwide. Our invitation noted that we would appreciate if they all had a champagne ready and enjoy it with us. People loved the idea and to our surprise, people got all dressed up, prepared nice food and had champagne, they truly celebrated with us," says Dukule.

"We also received lot of presents that you would not typically expect as wedding gifts: Amazon gift cards, UberEats credits, PayPal credits etc. We received many contactless flower and cheese deliveries as well. Our guests enjoyed sharing this day with us without the hassle of going to an actual wedding." 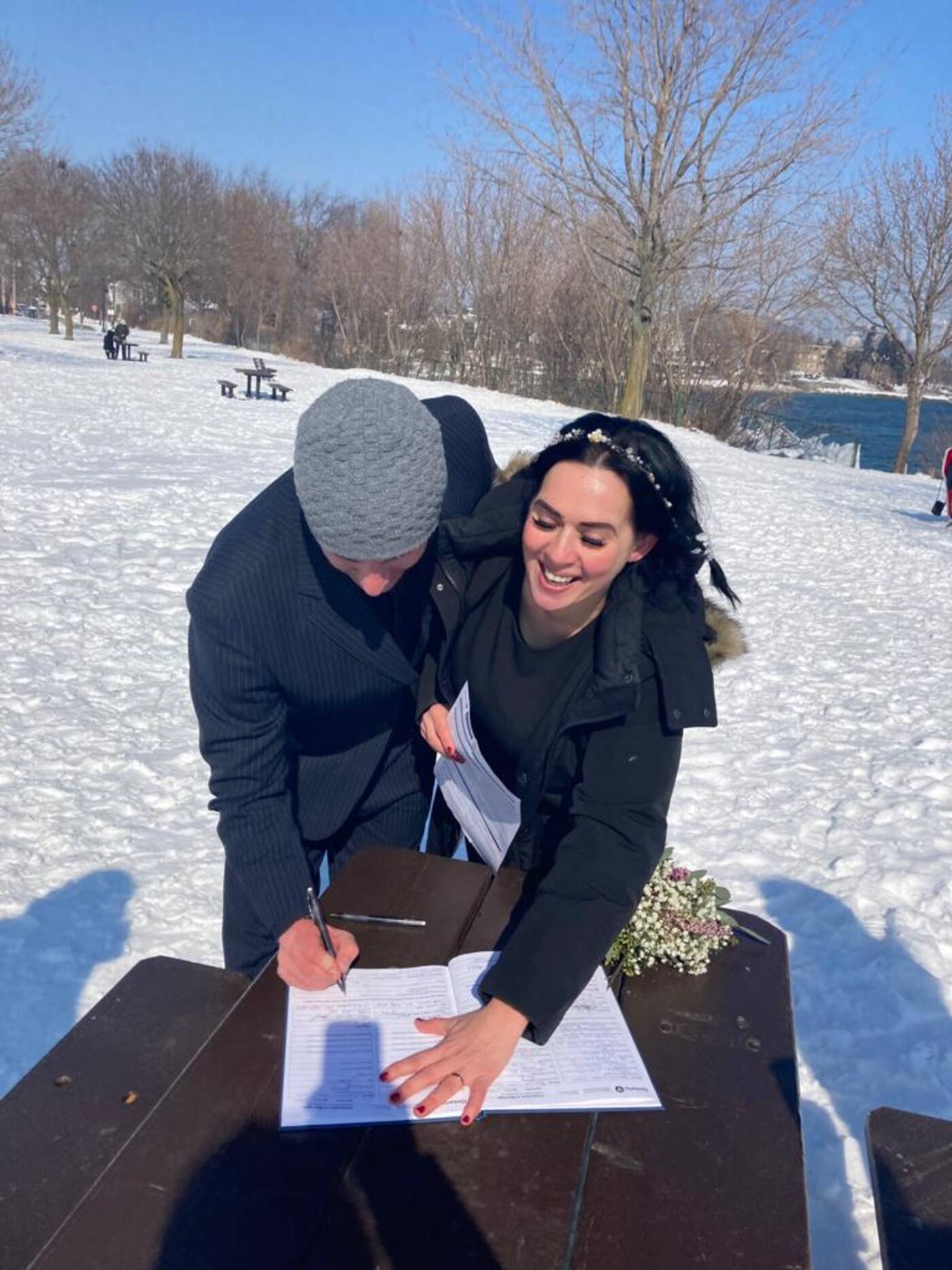 The virtual attendance also meant the guest list didn't have to be restricted due to in-person gathering limits. Many people shared the experience of the wedding even though only four people were actually present.

"We absolutely recommend other couples to do it by the lake and don't worry about the guests. Though virtually, they will have a great time!"

Despite the cold, distance and unusual situation, the couple took the plunge to do what really made them happy, which is what a wedding should be all about.

"It was very cold! Very! While the lovely wedding officiant was performing the ceremony, we both were holding our hands and rubbing our fingers to stay warm," says Dukule.

"It was a challenge to put on rings because we were so cold. But at that moment it didn't really matter. We are the north and getting married in middle of the winter is what we do."