Ontario Premier Doug Ford was right to warn us that when the latest COVID-19 modelling data was released this week, we'd "fall off [our] chair," seeing as the numbers show a realistic surge of 10,000 new cases per day provincewide in just a month's time.

The projections, published by the province's COVID-19 Science Advisory Table on Tuesday, show that total new cases per 100,000 residents and per cent positivity among those tested have been trending upwards across all health regions. 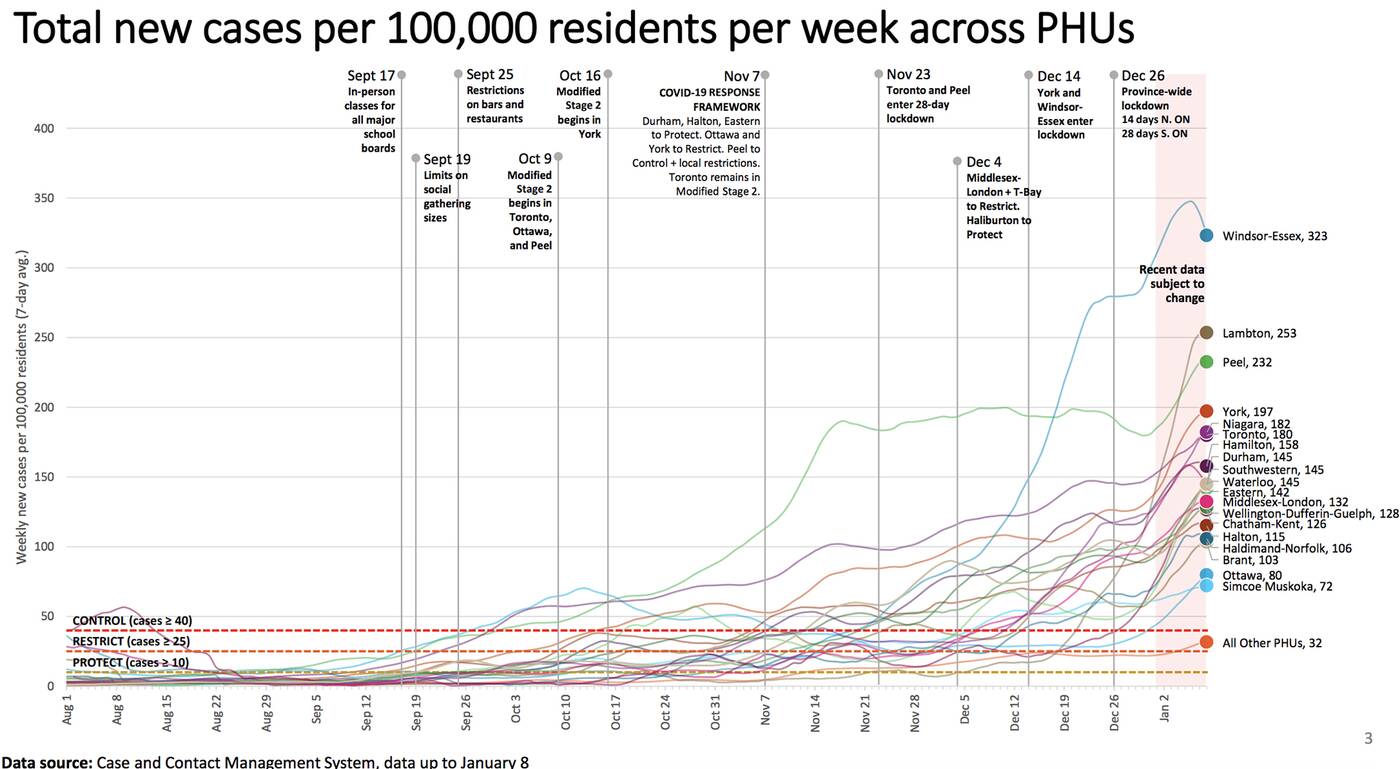 "Growth in cases has accelerated and is over seven per cent on the worst days," the new report reads, adding that long-term care homes continue to serve as hotspots for the virus, with 40 per cent of facilities in Ontario now actively reporting outbreaks.

This is at the current transmission rate of three to five per cent, but there are both more and less severe scenarios as well, including one in which we could see upwards of 40,000 daily new cases — far more than even Florida — if transmission rates are consistently at the worst we've seen in Ontario. 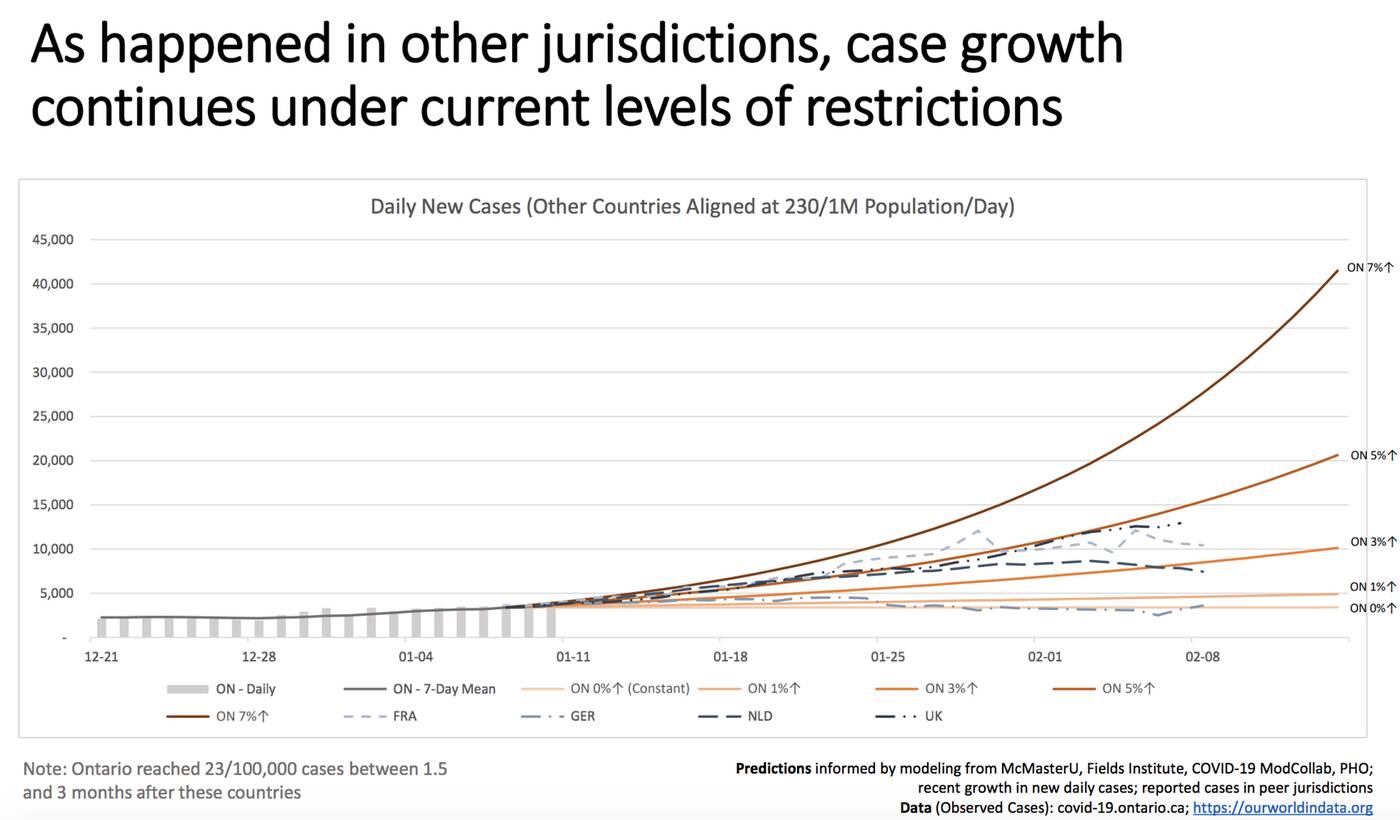 The data also points to the fact that the new variant of the virus, which appears to be more communicable, could drastically increase transmission rates if more cases of it pop up among the population.

"Without significant reductions in contacts, the health system will be overwhelmed and mortality will exceed the first wave totals before a vaccine has time to take effect," the health officials leading the panel write.

"Mobility, and contacts between people have not decreased with the current restrictions [though] survey data show that the majority of Ontarians are helping limit spread by following them." 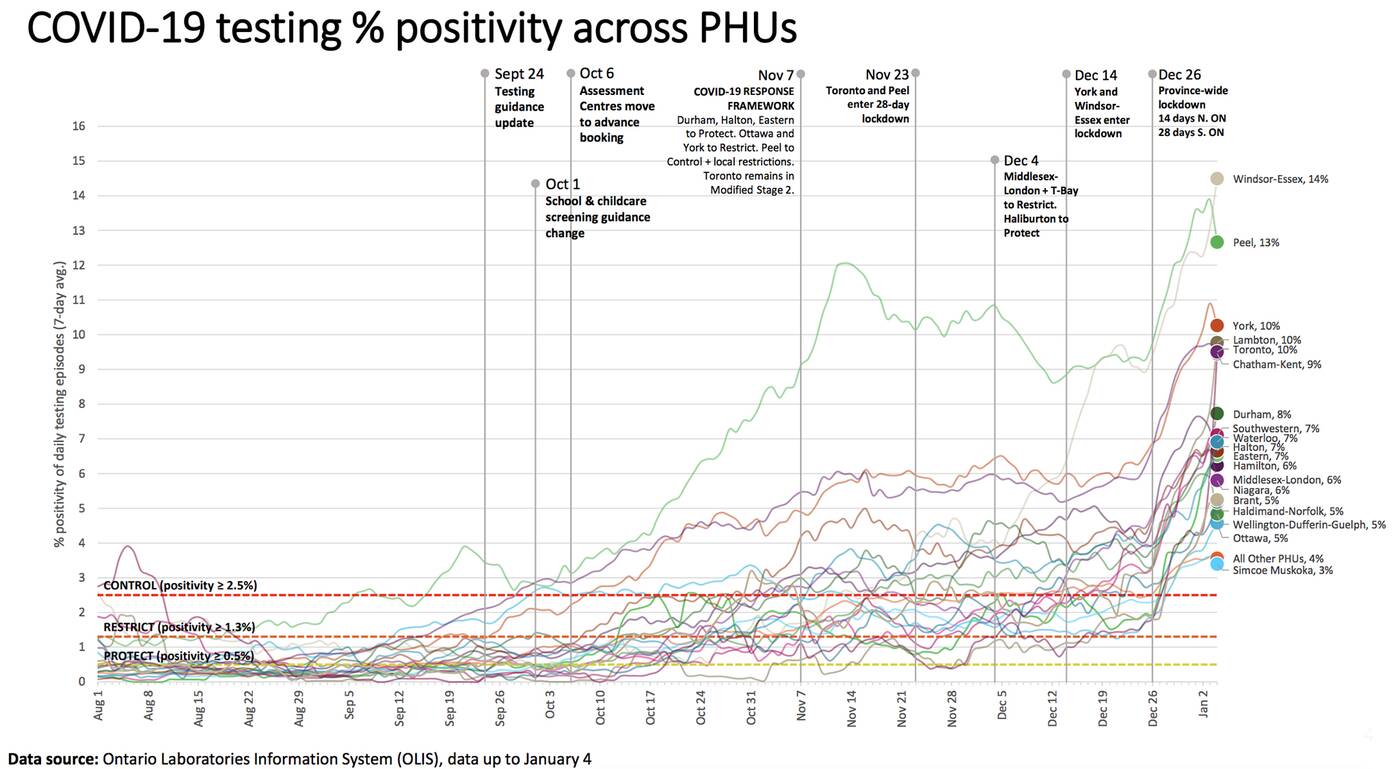 In some other parts of the world identified as "peer jurisdictions" by the panel, various versions of lockdown have included more drastic health and safety measures like school closures, mandatory masking outdoors and curfews, none of which Ontario has at the moment.

But some experts have pointed out that outbreaks at essential workplaces are a much larger driver of virus spread than the general public being out on the streets after 8 p.m.

"We keep hearing over and over and over, stay home. There are diminishing returns with this advice, but also, most people who can stay home ARE. So what's the issue? There are a HUGE # of people who can't stay home because they work in essential jobs," Trillium Health Partners infections diseases physician Dr. Sumon Chakrabarti wrote in a popular Twitter thread this week that advised against curfews and other such heavy-handed measures. 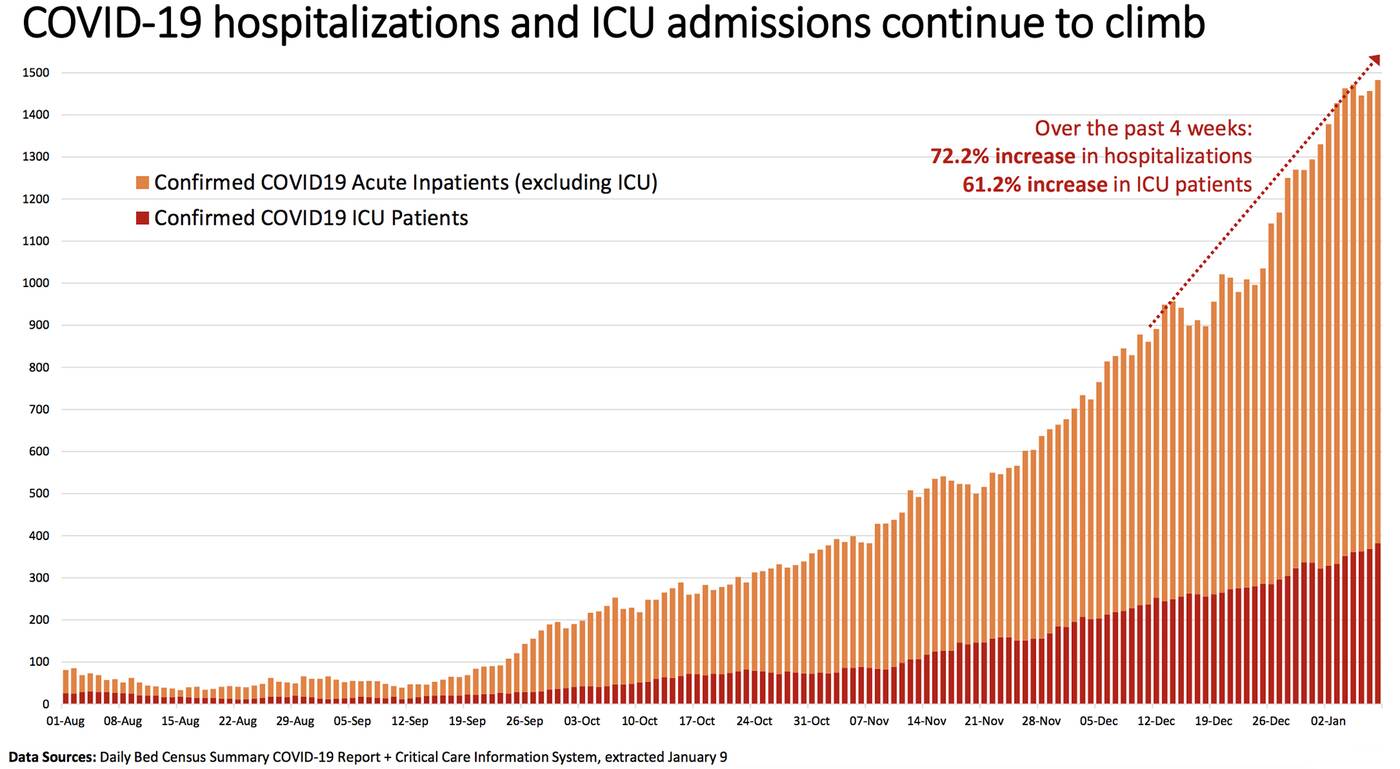 Trips abroad have also been identified as a huge factor in transmission, with even a former member of the panel that released this modelling data among the health officials and politicians busted for taking a non-essential vacation to a beachy locale over the winter break.

It takes a bit of cognitive dissonance for figures who aren't following their own advice for the public to stay home to suggest more prohibitive measures.

It is also noteworthy that previous modelling data hasn't been accurate — the predictions released in November, for example, said that the province could see 6,500 new cases per day by mid-December if more drastic measures weren't implemented.

The actual numbers ended up being around 2,000 new cases per day by that time, while the provincial blanket lockdown was later introduced close to the end of the year.