Highland Creek Park, situated along the western portion of Highland Creek, is just one of the natural areas that surround the scenic waterway on its journey toward Lake Ontario. 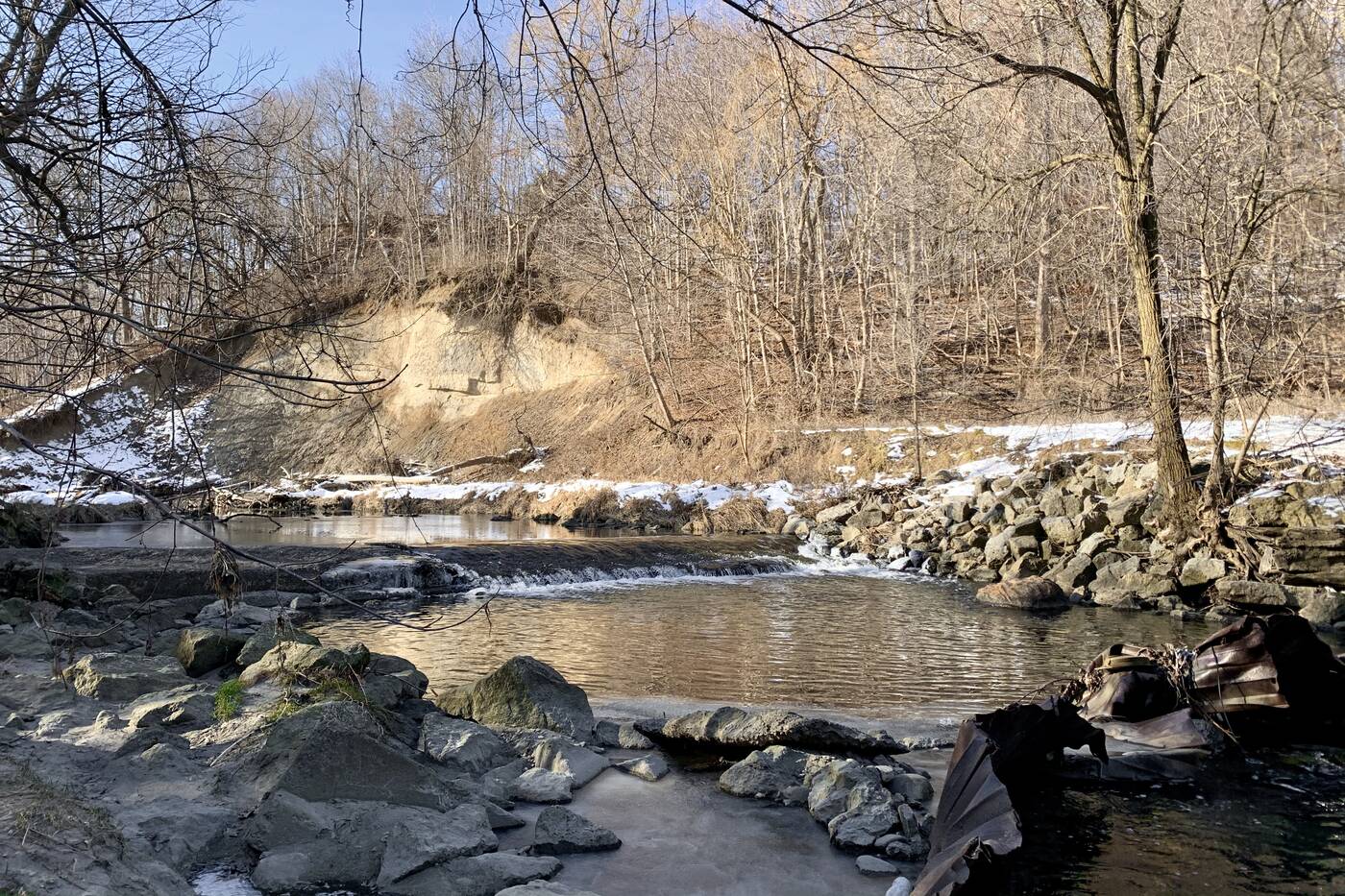 The park can be found off the quiet residential intersection of Templeton Court and Celeste Drive. Once you make your way down the stairs, head north for Morningside Park. Think of the large underpass at Lawrence Avenue as the unofficial entrance. 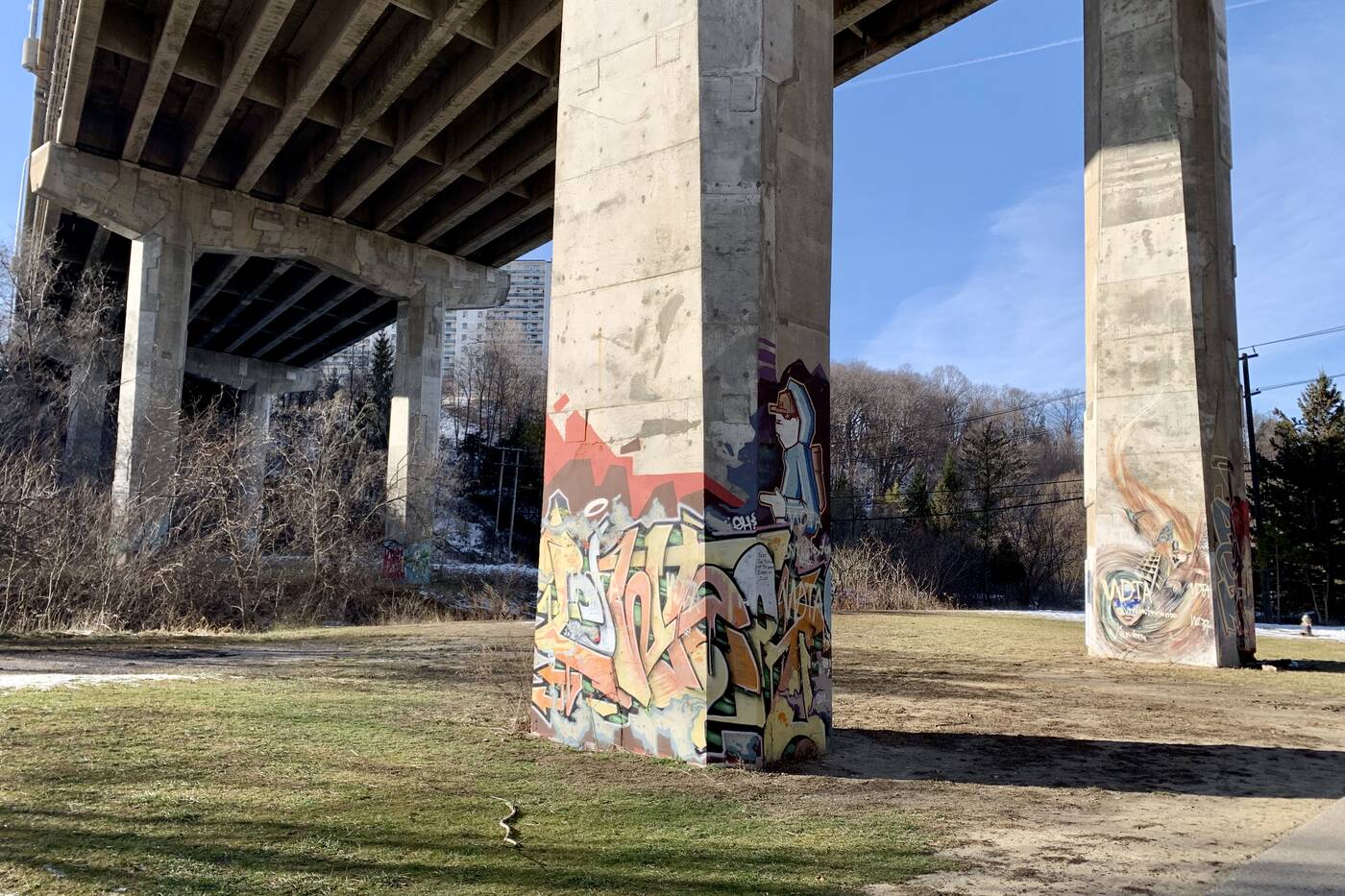 Morningside Park is situated to the northeast and starts roughly around Lawrence Avenue. 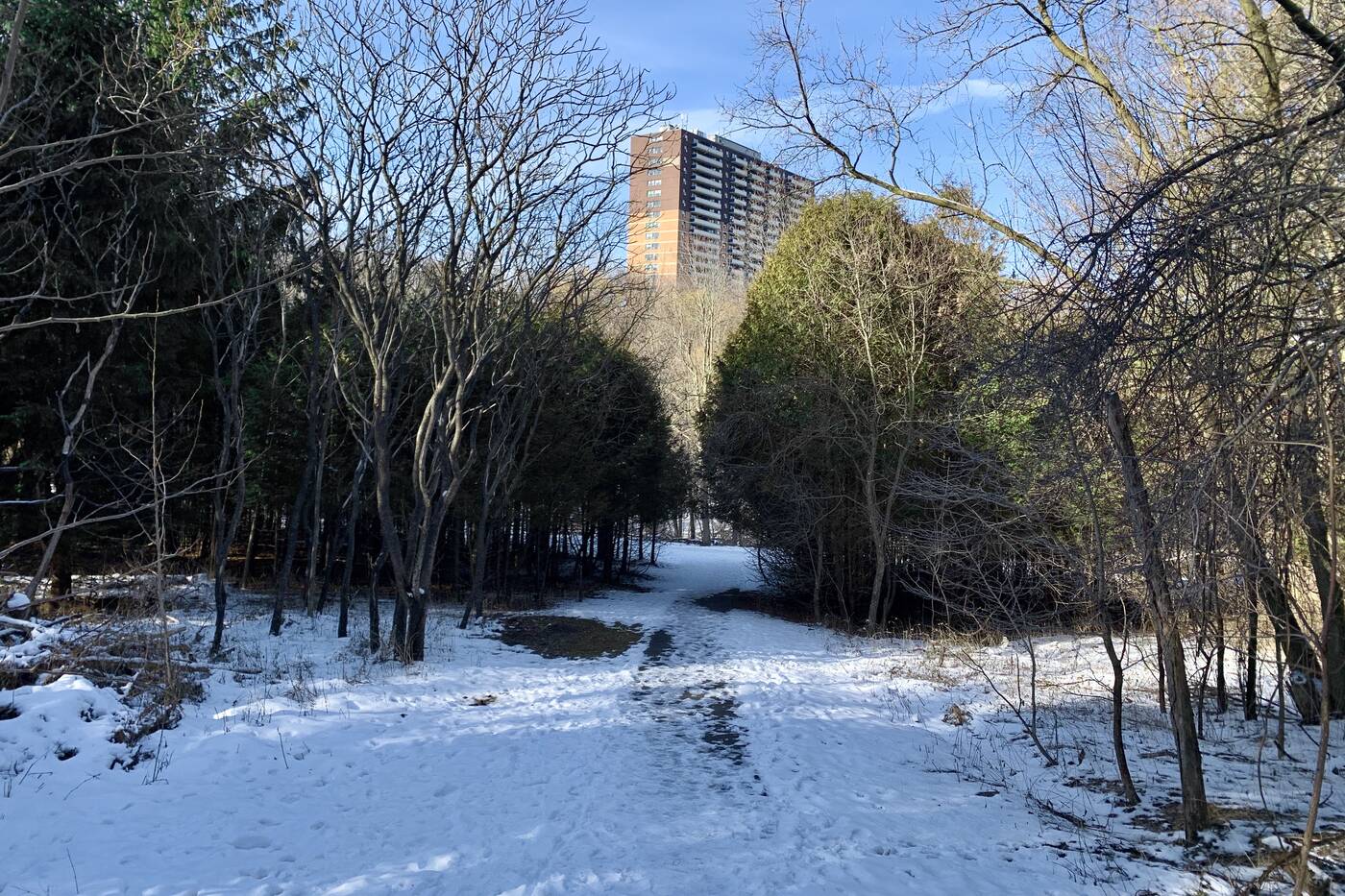 The top of the apartment building at the beginning of the trail will be the last hint of the city you'll see on the walk.

Although near the beginning of your journey you'll see the top of an apartment building, all sense of civilization quickly fades away and the wide-open trails will have you feeling hidden away from the surrounding urban environment. 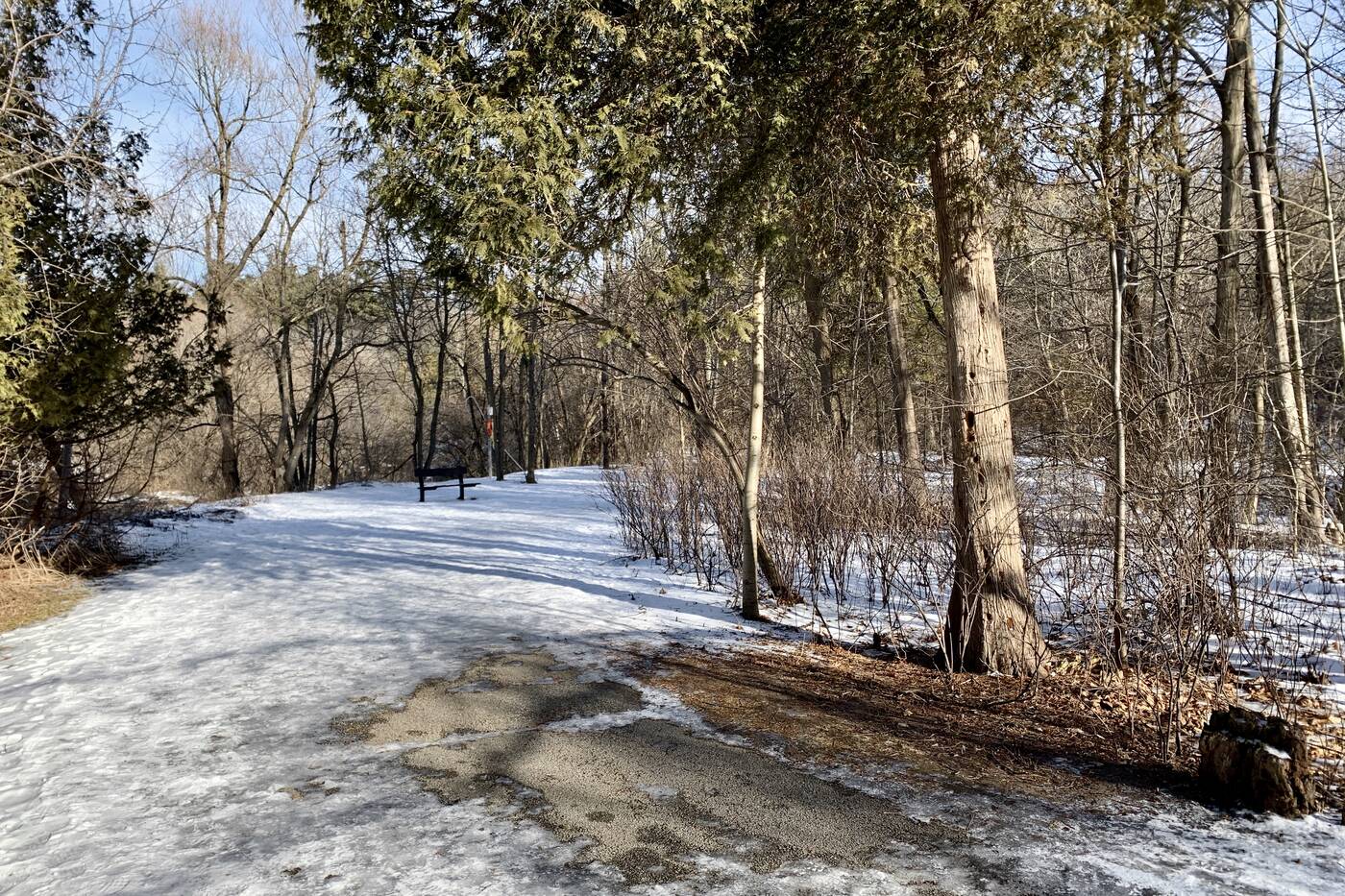 Be careful as the paved trail can get icy throughout the winter.

There are multiple access points down to the water and plenty of large cement boulders throughout the shallower sections of the river making for some picturesque rapids. 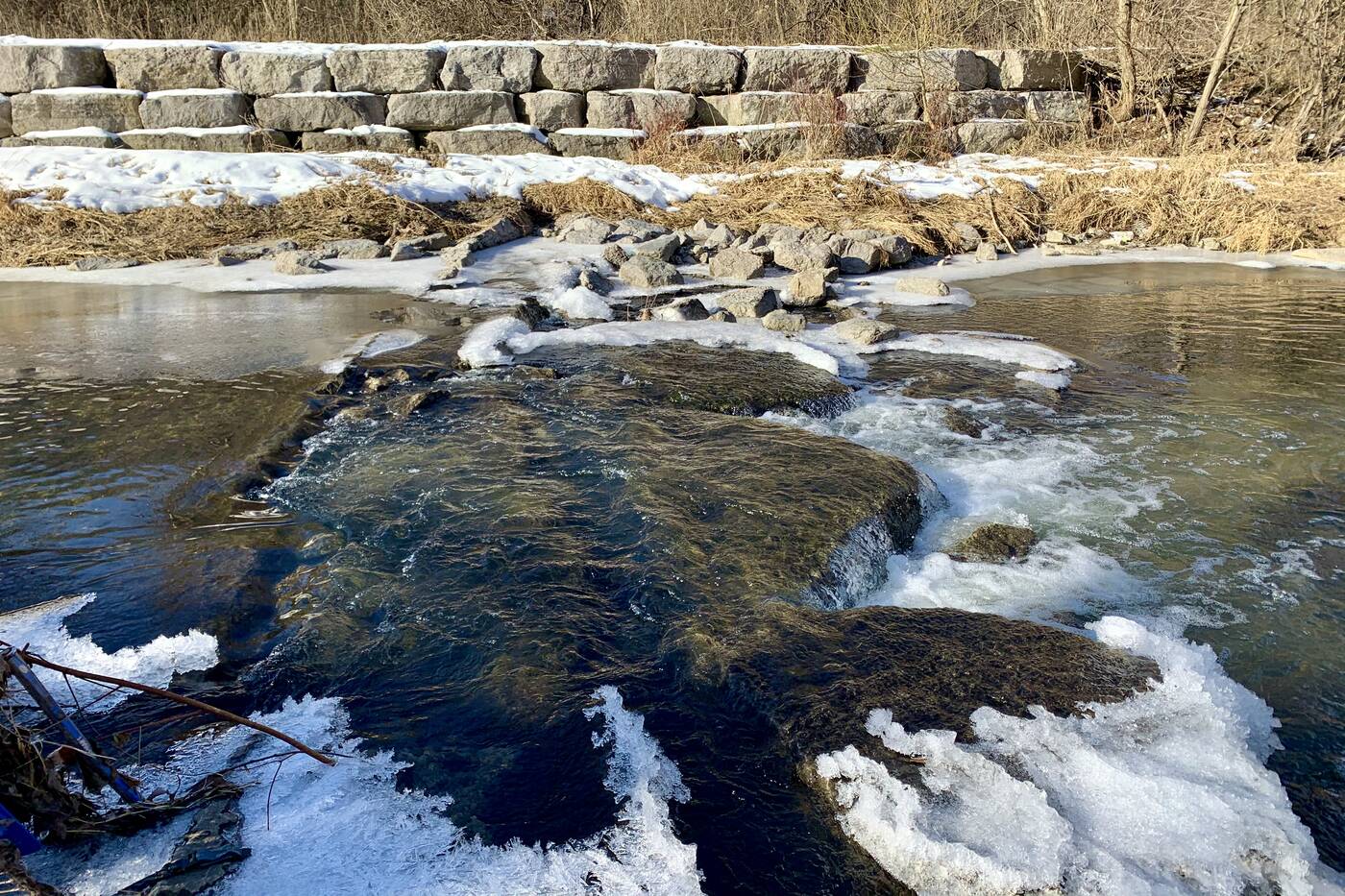 There are multiple rapids to admire.

You'll also be reminded that you're not far from the beautiful Scarborough Bluffs when you spot the cliff formations along the edge of the water. 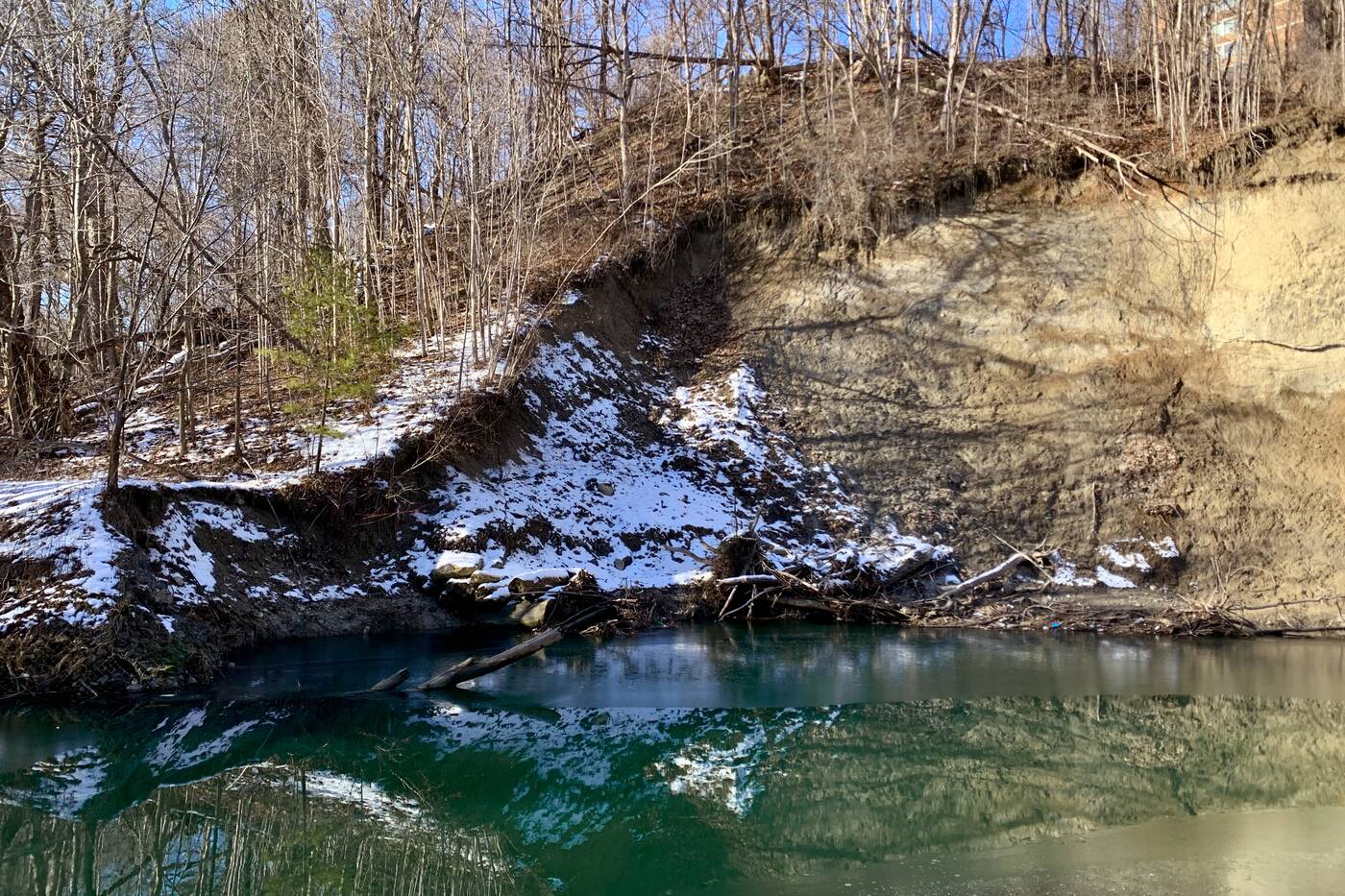 The sandy cliff formations on the side of the river resemble the landscape of the nearby Scarborough Bluffs.

Although obviously not as dramatic as the bluffs, the sandy shoreline makes for some incredible views — even moreso when the river is half frozen.

As you continue on, the river continues to wind through the area, at one point switching to the south side of the trail. Wander just a little deeper into the forest along this section to peek at the river. 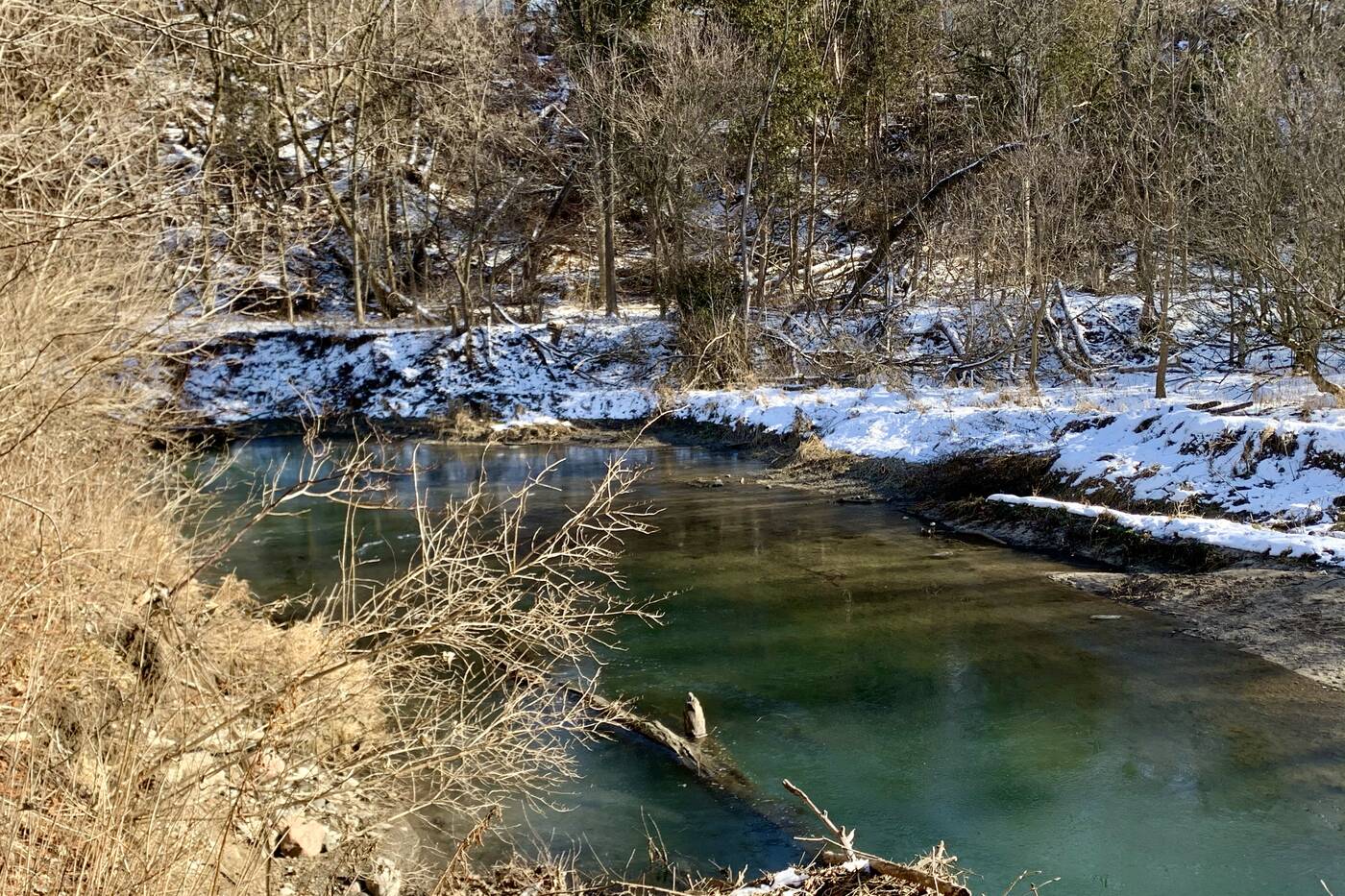 You can expect endless river views.

Don't be afraid to venture off the main paved trail. Just before and past the second bridge along your way, you'll see forest trails that veer off and follow the river on either side. 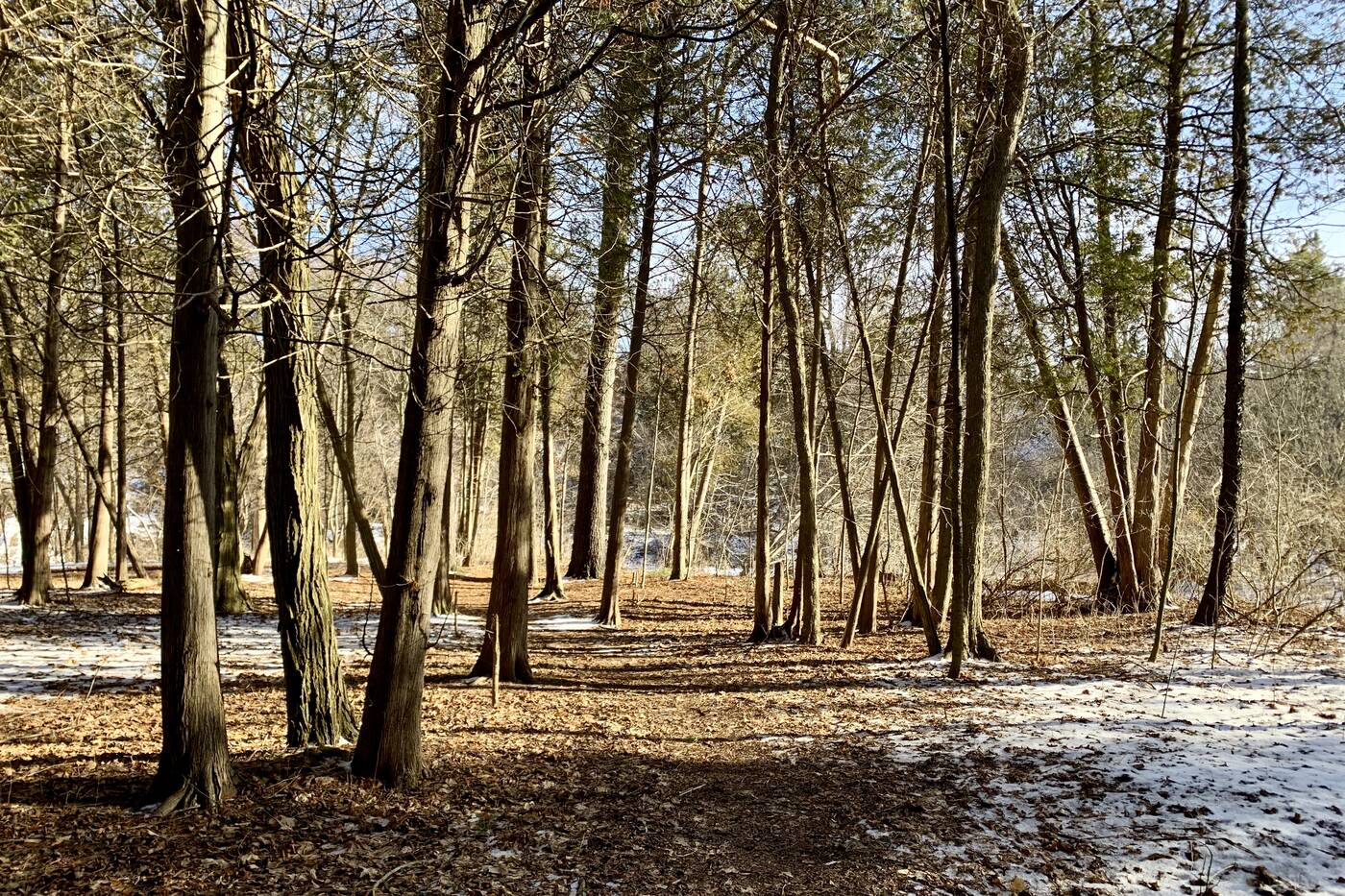 The open forest on either side of the trail makes you feel completely secluded.

Once you follow one of the side pathways, you can get even closer to the river with a walkway right on its edge. 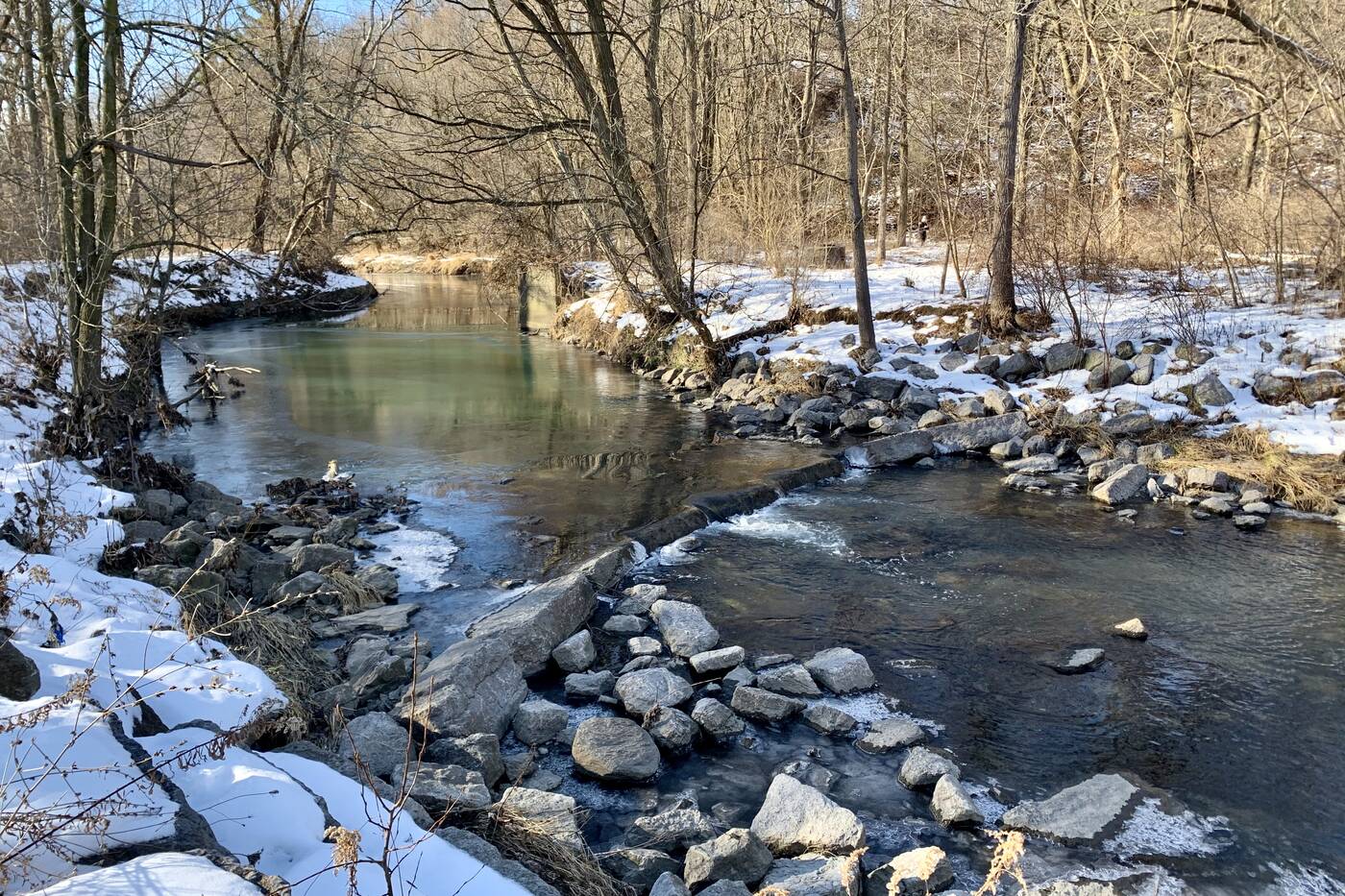 Further along, you'll get to walk right along the water's edge.

Eventually, after walking west for just a little while longer, your walk will come to an end where the fenced-off Scarboro Golf and Country Club grounds begin. 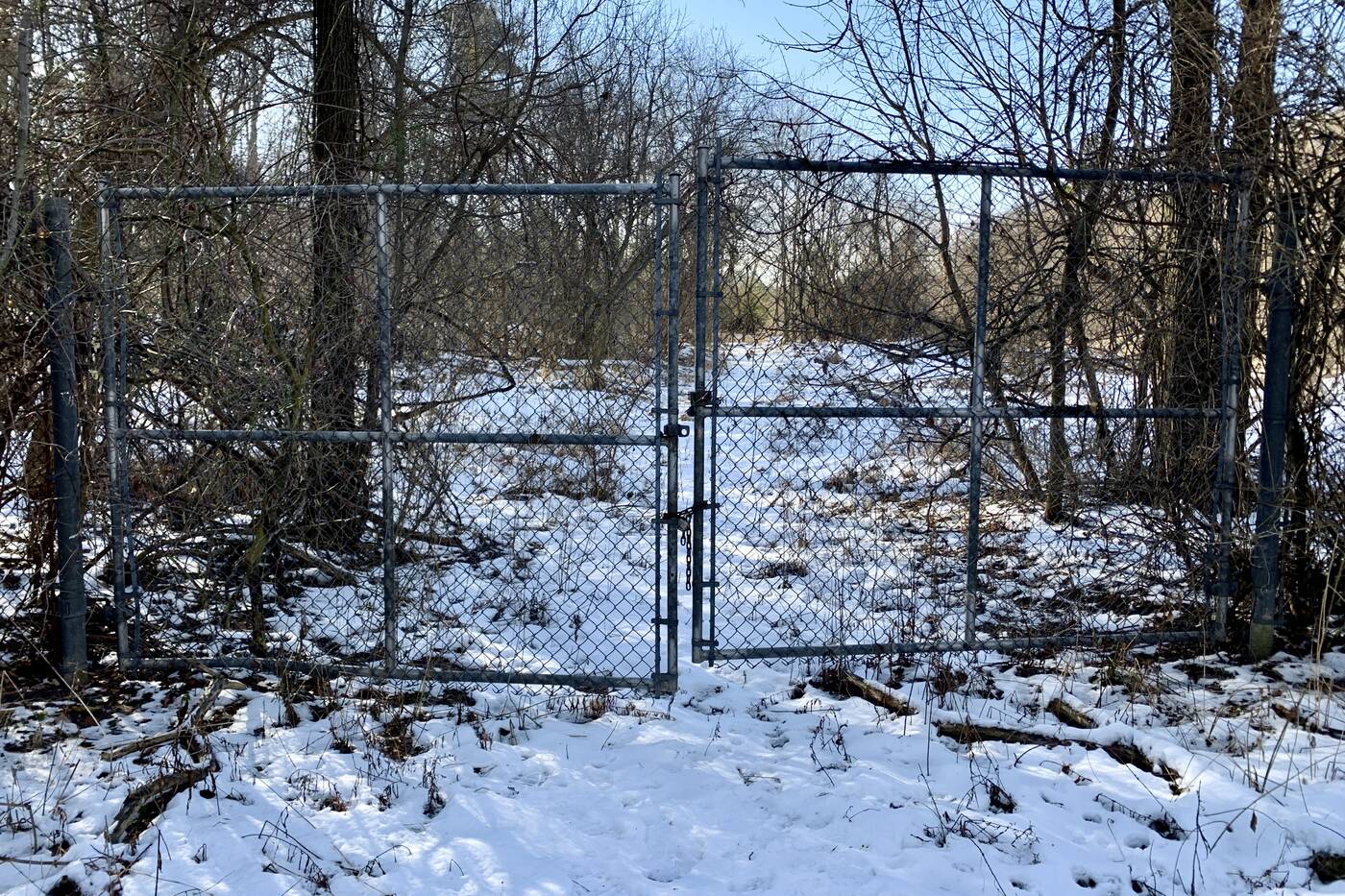