You know those water-filled basins along the harbourfront in downtown Toronto? Those inlets that are usually filled with ducks, docks or both? The ones that require you to walk up from the Martin Goodman Trail, and then back again, no less than seven times between Spadina and Sugar Beach if you're strolling along the water's edge?

Apparently, some people find them annoying — at least in the sense that they get in the way of one long, continuous waterfront boardwalk.

Waterfront Toronto has been working on a pretty cool way to remedy this: Installing "five iconic timber footbridges that will allow people to stroll across the inner harbour's slip basins and inlets."

These pedestrian bridges will "create a waterfront link between the major destinations that line the central waterfront including the Music Garden, HtO Park, Harbourfront Centre and Queens Quay Terminal," according to Waterfront Toronto, while leaving the basins intact for boats to use.

Waterfront Toronto intends to bridge the gap between public spaces along the harbour with five footbridges like this one, rendered over the Peter Street Slip between Spadina Ave. and Rees St. Image via Waterfront Toronto.

While beautiful, judging by the renderings (as designed by landscape architects West 8 and DTAH), the plan to simply create a continuous promenade with small footbridges bridges hasn't been received without criticism.

In fact, one local architecture studio is proposing something entirely different with a radical spec project called "Fill Er Up!" that would see the slips replaced with "infill" (read: garbage) and topped with new public parks.

"Our idea is that you could employ basin infill on one or many basins. Anything  would help, but the basin at the base of Yonge and the other one beside Queens Quay would be particularly  effective," said RevelHouse Principal John Plumpton of the strategy.

"The basins exist mainly for the use of water vessels (water taxis and party boats) and boating clubs," Plumpton continued, arguing that Waterfront Toronto's recently-released 2020 Marine Use Strategy didn't do enough to address issues like frequent pedestrian-cyclist conflicts on the Martin Goodman Trail.

"We were very surprised it included so little about public space (for the masses) in deferral to these rather exclusive groups." 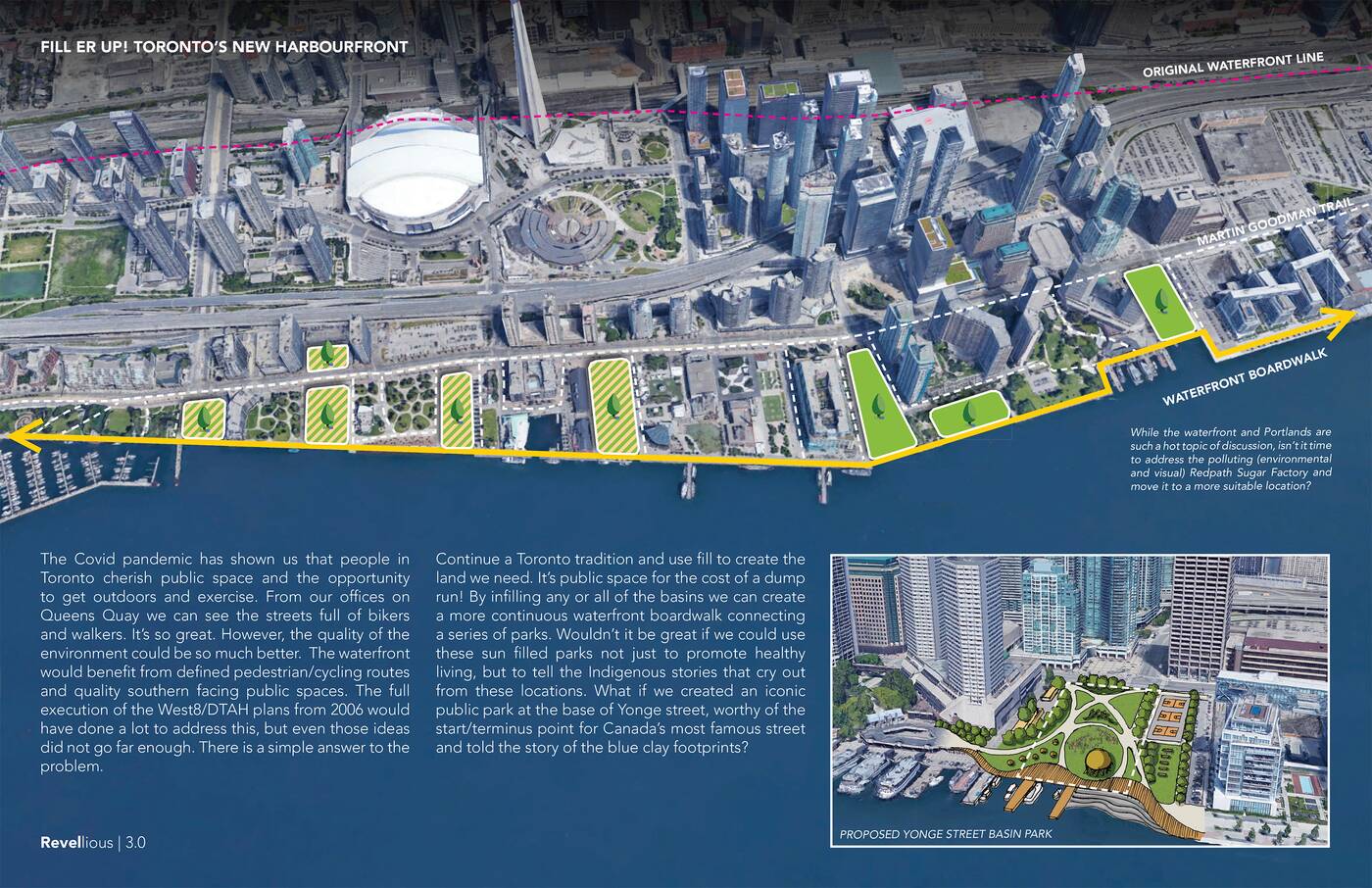 FILL ER UP! Toronto's New Harbourfront is a spec proposal that explores the idea of filling in several slips along the water with land. Image via RevelHouse.

A one-pager detailing the firm's 'FILL ER UP! Toronto's New Harbourfront' strategy explores how basins such as the Spadina Slip, the Peter Slip, Police Basin, Rees Slip and Simcoe Slip could be filled in and used to create more public space.

"The Covid pandemic has shown us that people in Toronto cherish public space and the opportunity to get outdoors and exercise," it reads. "However, the quality of the environment could be so much better. The waterfront would benefit from defined pedestrian/cycling routes and quality southern facing public spaces."

"There is a simple answer to the problem: Continue a Toronto tradition and use fill to create the land we need. It's public space for the cost of a dump run! By infilling any or all of the basins we can create a more continuous waterfront boardwalk connecting a series of parks."

The proposal also suggests using these new sun-filled parks "to tell the Indigenous stories that cry out from these locations." 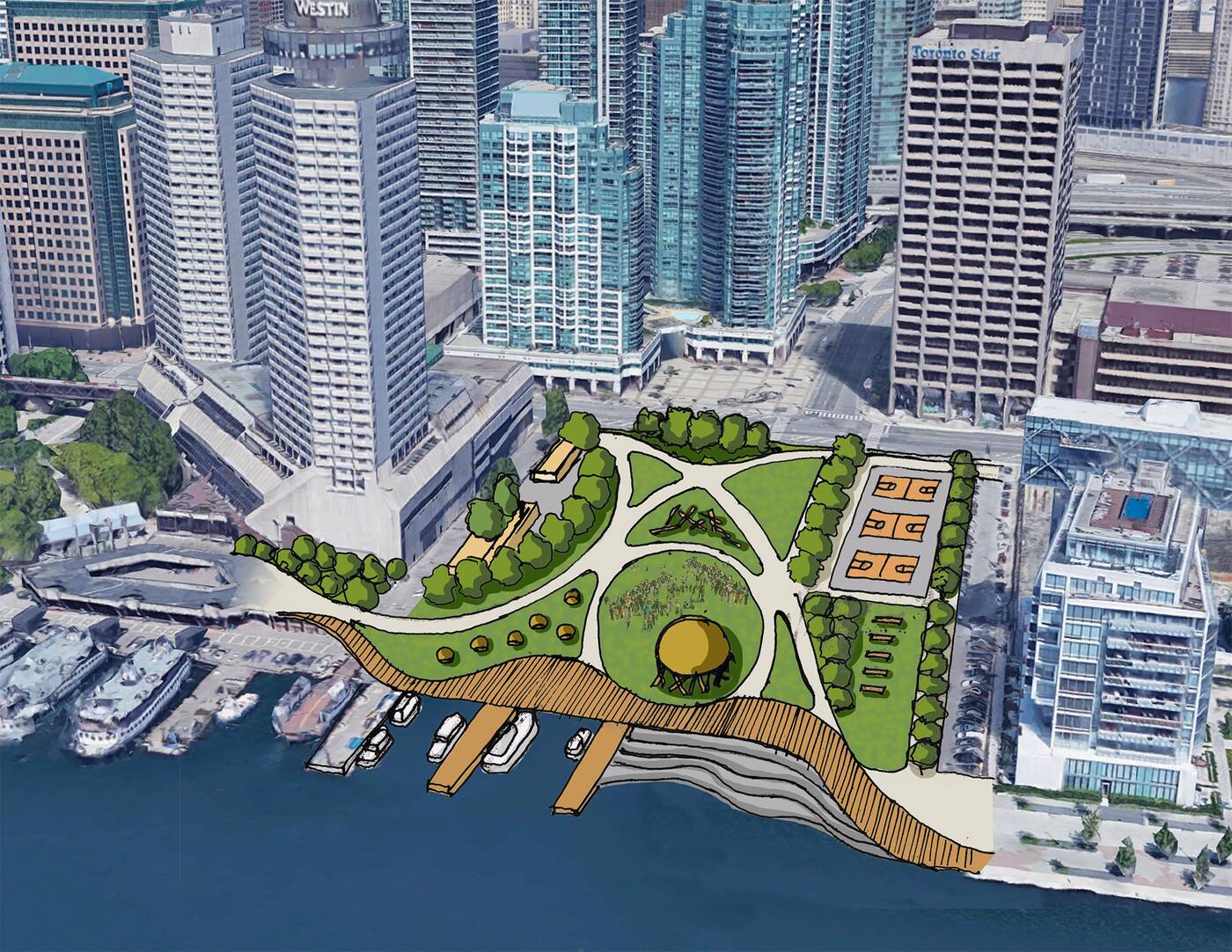 RevelHouse's proposal for the harbour basins would create one continuous line along the waterfront and plenty of new urban park space. Image via RevelHouse.

When asked about the proposal and the idea of infilling the basins in general, Waterfront Toronto explained that the existing slips "provide access to the water, give people a safer environment to explore new recreational activities like kayaking and canoeing, and in the case of places like Canada's Sugar Beach, the slips actually provide more adjacency to the water."

"Waterfront Toronto believes it is important to activate these slips along the waterfront, as they play a number of important roles as part of a dynamic, active harbour and working port," said Waterfront Toronto spokesperson Andrew Tumilty to blogTO.

"Recently, Waterfront Toronto released a draft Marine Use Strategy Report, which looked at how to manage, encourage, and expand the use of the harbour for a variety of marine activities. As part of this report, it was noted that there is actually a shortage of mooring opportunities in the harbor as marine traffic increases."

As it stands now, the plan is to continue moving forward with the existing Water's Edge Promenade project, the first phase of which saw the award-winning Spadina, Simcoe and Rees Street WaveDecks installed along Queen's Quay in the late 00's.