Traffic congestion in downtown Toronto is no joke, especially during rush hour and after major events. Ask anyone who's ever looked out longingly at pedestrians walking along Lake Shore Boulevard from the confines of an unmoving car.

There's simply not enough space on our roads to accommodate so many people, and with the city's population expected to explode over the next decade (yes, even despite the pandemic), your ability to get from point A to point B in a reasonable amount of time will only get harder.

Flying cars would be an ideal solution, obviously, but they haven't been invented yet — at least not in the consumer-friendly, mass market way that Hanna-Barbera's been teasing society with since the 1960s.

So what are we left with in terms of space for public transit vehicles? Surface roads, bridges and underground tunnels.

But there is another quite obvious option, when you think about it — one that Waterfront Toronto is currently exploring as part of a Marine Use Strategy update.

Let us know your thoughts on our 2020 Marine Use Strategy.

"To take Toronto's waterfront to the next level of revitalization, Waterfront Toronto plans to build on the existing connections around the harbour," wrote the consortium in a post promoting a virtual Public Information Centre (PIC) session that launched on October 26.

"In collaboration with City of Toronto, Ports Toronto, and Toronto and Regional Conservation Authority, we're updating the Marine Strategy and Implementation Plan for Toronto's waterfront."

A lot has changed along the bustling waterfront since the first Marine Use Strategy draft was released in 2006, says Waterfront Toronto, and the time is right to put something on paper that ensures one of our most-valuable resources "maintains a balance of commercial shipping, tour boats, recreational boating and water-based transportation."

The project team has identified three key areas of concern to be addressed with the plan, which when complete will be used to guide the design of future shoreline improvements: Management (who does what?), Mooring (where should boats go?), and Movement.

"The Movement chapter is rooted in a principle of creating more connections to more destinations," reads the recently-published PIC document.

"This means not only making it easier to get people to the water's edge, but also on, in and over the water."

Along with vehicular ferries and a common water taxi dock system, planners are suggesting the implementation of a new "seabus system" that would transport people between 11 different "marine nodes." 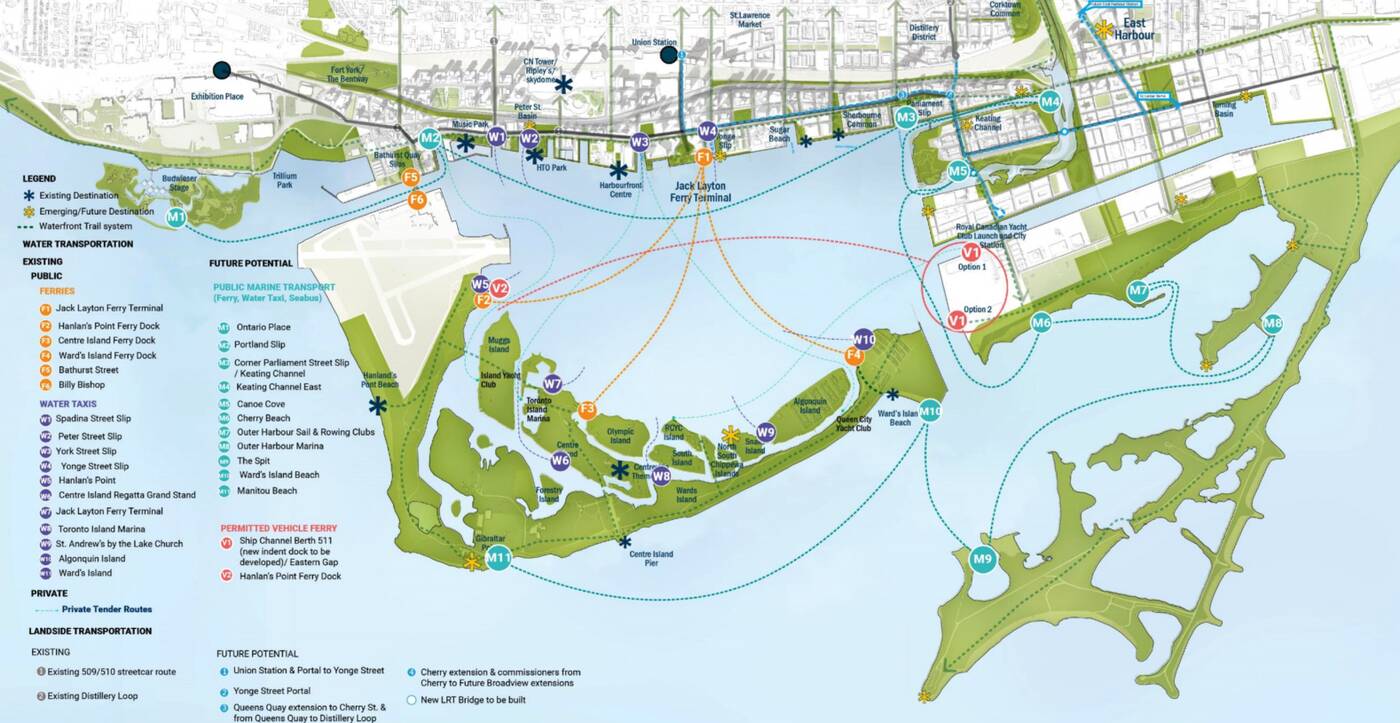 These nodes would effectively work like subway stops, but for a water-based public transportation vehicle that would travel along the waterfront, around the harbour, into the islands and back.

The idea is to "develop a system of sea buses, which would essentially be small passenger vessels sailing a fixed route on scheduled times (similar to a 'normal' bus service)," according to the draft strategy report.

"Where possible, connectivity with onshore transit needs to be created to realize an integrated public transportation system from land onto the water and vice versa," it continues.

"These sea buses can be developed using the latest green technologies (electric, solar powered, hydrogen fuelled), to reduce their carbon footprint as much as possible."

Waterfront Toronto is only suggesting at this point that they launch a "feasibility study for the introduction of a sea bus system on the waterfront," so it's nowhere near a sure thing — but it's of note that marine-based public transit systems have already been successfully implemented in cities such as Stockholm and Vancouver.

You can weigh in on the idea now by completing the consortium's survey on its 2020 Marine Use Strategy Draft Report before Nov. 9.