Tensions have perhaps never been higher between the City of Toronto and those advocating on behalf of residents experiencing homelessness, especially with the drama surrounding those people living in the tent encampments that have cropped up around the city amid the health crisis.

More and more citizens found themselves in a financially precarious situation this year and with the city's 6,000-bed shelter system often at maximum capacity, in part due to new physical distancing protocols, unhoused people in Toronto have few options in the face of the dropping temperatures.

Some individuals have even been spotted laying out their belongings in places like TTC vehicles in recent weeks, turning seats into makeshift temporary living spaces of sorts and using them as a place to hang belongings and catch some shuteye with protection from the cold. 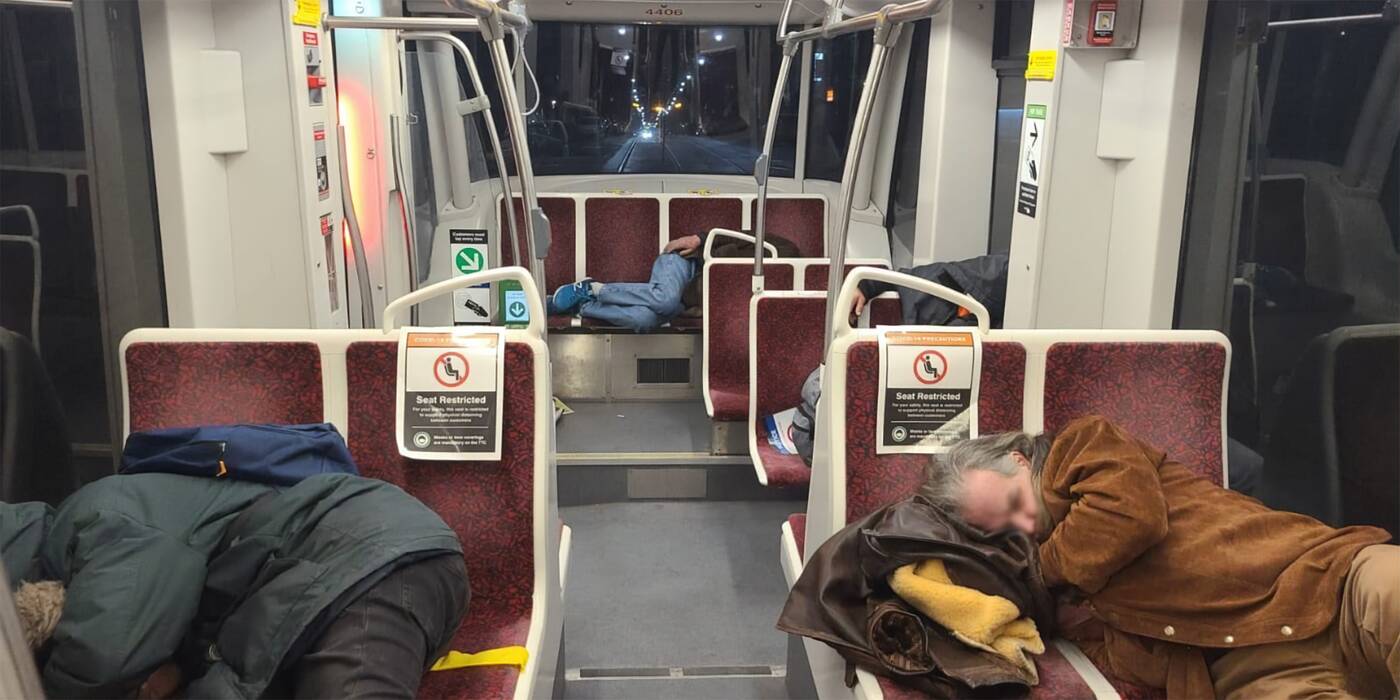 Multiple residents trying to get some sleep on a TTC streetcar. Photo courtesy of @imthedarkknight.

Two images in particular, taken on the 501 Queen streetcar on Monday night, showcase just how dire the situation has become.

"Current state of affairs of the homeless in Toronto @JohnTory @fordnation @JustinTrudeau needs to STEP UP during this COVID-19 crisis," wrote social media whistleblower and advocate Rocco Signorile in a tweet sharing the pictures, which were sent to him, on Tuesday morning.

He also rightfully asks "What’s a TTC essential worker supposed to do?" pointing out that such incidents could present potentially dangerous interactions for all involved, including riders.

"Homeless need help," he implores the mayor and premier.

And he's far from the only one calling for such help for the city's most vulnerable — hundreds have been signing petitions to stop the clearing of tent encampments in the City's public spaces, with high-profile celebrities like comedian Colin Mochrie and musician Feist also speaking out for the cause.

"The City of Toronto is planning encampment evictions across the city, leaving many of our unhoused citizens without a place to go. Imagine being homeless and evicted from your encampment. Sounds like a Dickens novel," Mochrie said in a video posted to social media last week.

Though the City has been expanding its number of temporary and permanent housing options for the homeless — adding 2,300 more shelter spaces in recent months — some neighbourhoods have been vocally opposed to them coming to their areas, even protesting against them in the streets.

And, many of those without a permanent living situations are averse to a shelter situation, though the City has been working to provide them with safe, indoor housing.

Then there was the fact that the City threatened legal action against a kindhearted Samaritan who has been fundraising to single-handedly build tiny shelters for those in need, vowing to forcibly remove said shelters from City property.

"The safest place for anyone experiencing homelessness in Toronto is inside, in a shelter, hotel or, ultimately, housing, and that is why the City is focused on investing significant public funding on these services," the City wrote in a release on the subject last week.

Advocates such as spokespeople from the St. Felix 24-Hour Respite Centre in Liberty Village — whose clients were blamed by some for an uptick of break-ins in Liberty Village this fall — have aptly noted that "People really should understand that no matter how well you’re doing in life at the moment, no one is completely protected from being one of them if something goes wrong. It could be anyone."

The TTC has acknowledged that there has been an increase in under-housed individuals seeking shelter from the cold in their spaces and elsewhere, adding that "the degree to which some individuals are taking over entire sections of streetcars and scattering belongings is not appropriate."

"It is reducing space for other customers at a time we are encouraging people to keep as much distance as possible," a spokesperson for the commission told blogTO.

"Supervisors and special constables will monitor any reports of this and our Community Engagement Unit will liaise with Streets to Homes and other agencies for supports and re-direction where required."