The history of the Riverdale neighbourhood in Toronto

Riverdale is a large area of Toronto, encompassing many smaller communities, just east of the DVP.

Technically, it stretches from the Danforth to Lakeshore Boulevard and from the Don River Valley to Jones Avenue. It encompasses many more well known neighbourhoods like Greektown, Leslieville, Riverside and East Chinatown.

If the Don Jail, Sunlight Park or Degrassi ring a bell to you, then you've definitely heard of Toronto's Riverdale. Not to be confused with the hit 2017 Netflix series by the same name, this neighbourhood has plenty to offer on its own.

Its history dates back all the way to the late 18th century. Similar to many neighbourhoods, it was originally settled because of the river in the area. 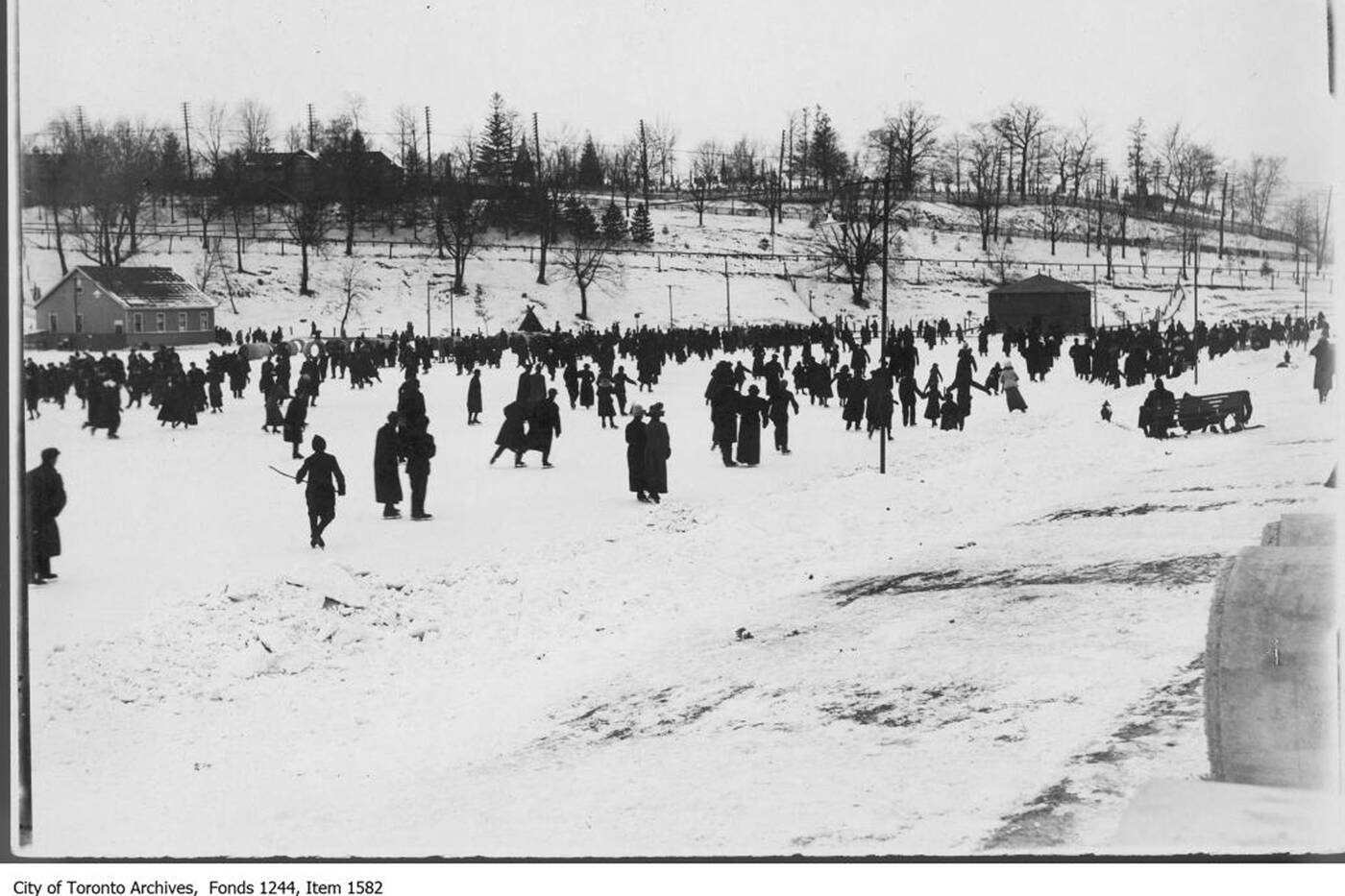 Skaters on Riverdale Rink in 1913. Photo by Toronto City Archives.

According to Best of Riverdale, the Don River linked prominent British settlers, who used generous land grants along its shores to homestead in the valley.

Over the years they built residences, sold timber, hay and crops while growing their families.

The Don River wasn't always called that. The Indigenous Anishnaabe group, who lived in the area long before the settlers came, named it "Wonsconteonach," meaning the river coming back from the back burnt country.

John Graves Simcoe, who wanted to make the area a British colony, decided to disregard its name and Native roots completely. Instead, he called it the Don after a stream in Yorkshire, England.

"By 1797, there were thirty-five men and 24 women living in The Don Valley and marsh. There were also indigenous people camping east of the Don as late as 1831," according to Best of Riverdale.

In the following decades, individuals like John Scadding, George Playter and William Smith continued to develop the area, setting the foundation for what would come in the 19th century.

In the 1800s, Riverdale became home to a variety of industries, including paint, glue and oil factories, metal and processing plants, as well as dairies and brickyards.

The Grand Trunk Railway was created in 1850s and had a big impact on Riverdale. Workers' houses were soon built in nearby Leslieville which led to the creation of roads, bridges and infrastructure. 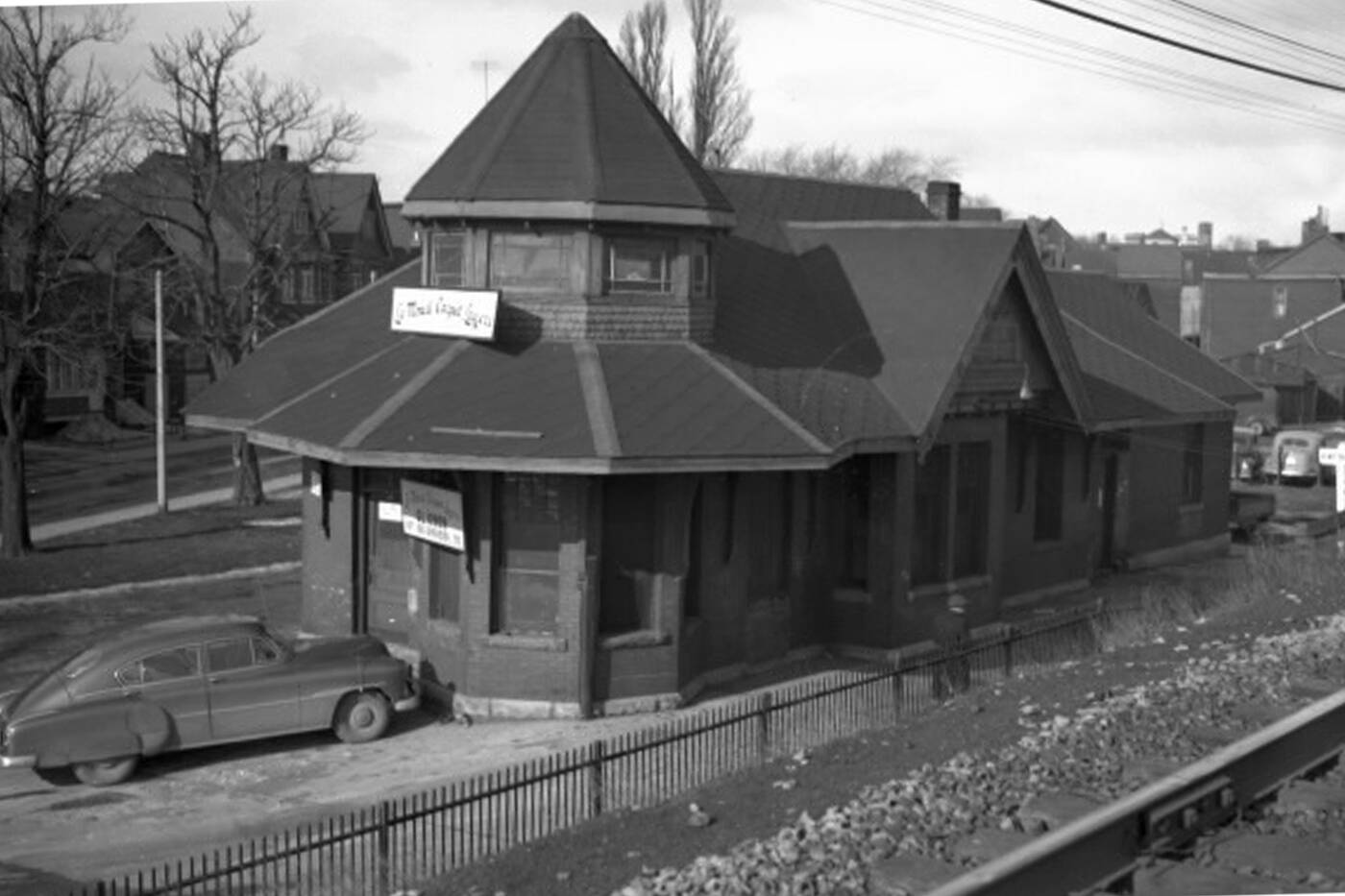 In 1896, the Queen East station of the railway was opened at Degrassi Street. This allowed local industries to begin shipping their products to other markets.

Until 1884, Riverdale north of Queen Street was mostly undeveloped. When it was annexed by the City of Toronto, things began to change. 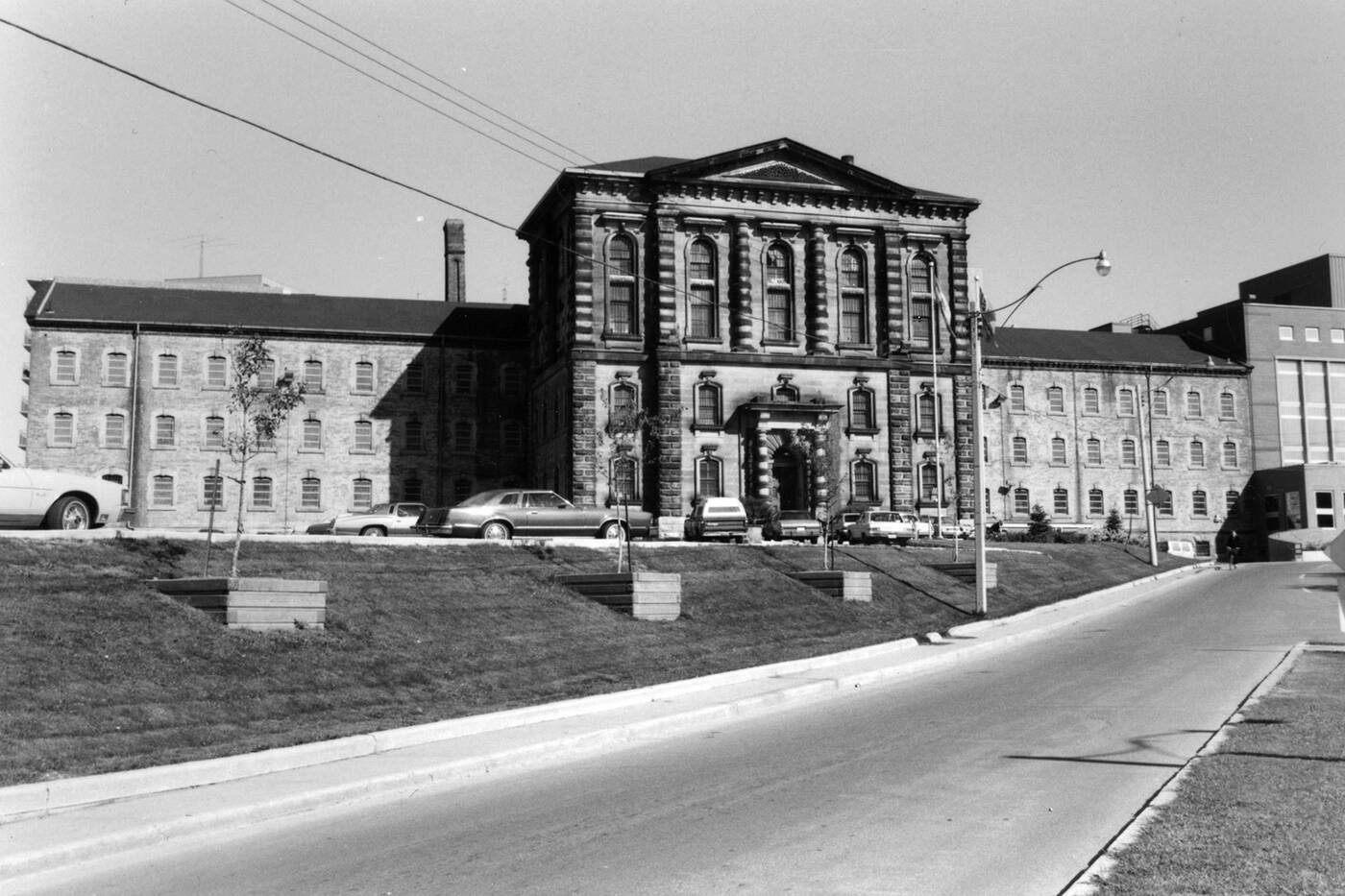 The Don Jail in 1985. Photo by Toronto Public Library.

The Don Jail was built on the east side of the river on Gerrard Street East and opened in 1864. For decades it housed some of the city's biggest criminal names. It served as a jail for over 150 years, until it closed in 2013. Currently, it acts as a hospital administration building.

The House of Refuge

The House of Refuge was built in the late 1860s as Toronto's first homeless shelter. The building, on the corner of Broadview Avenue and Gerrard Street East, was soon converted to help contain the 1869 smallpox epidemic. 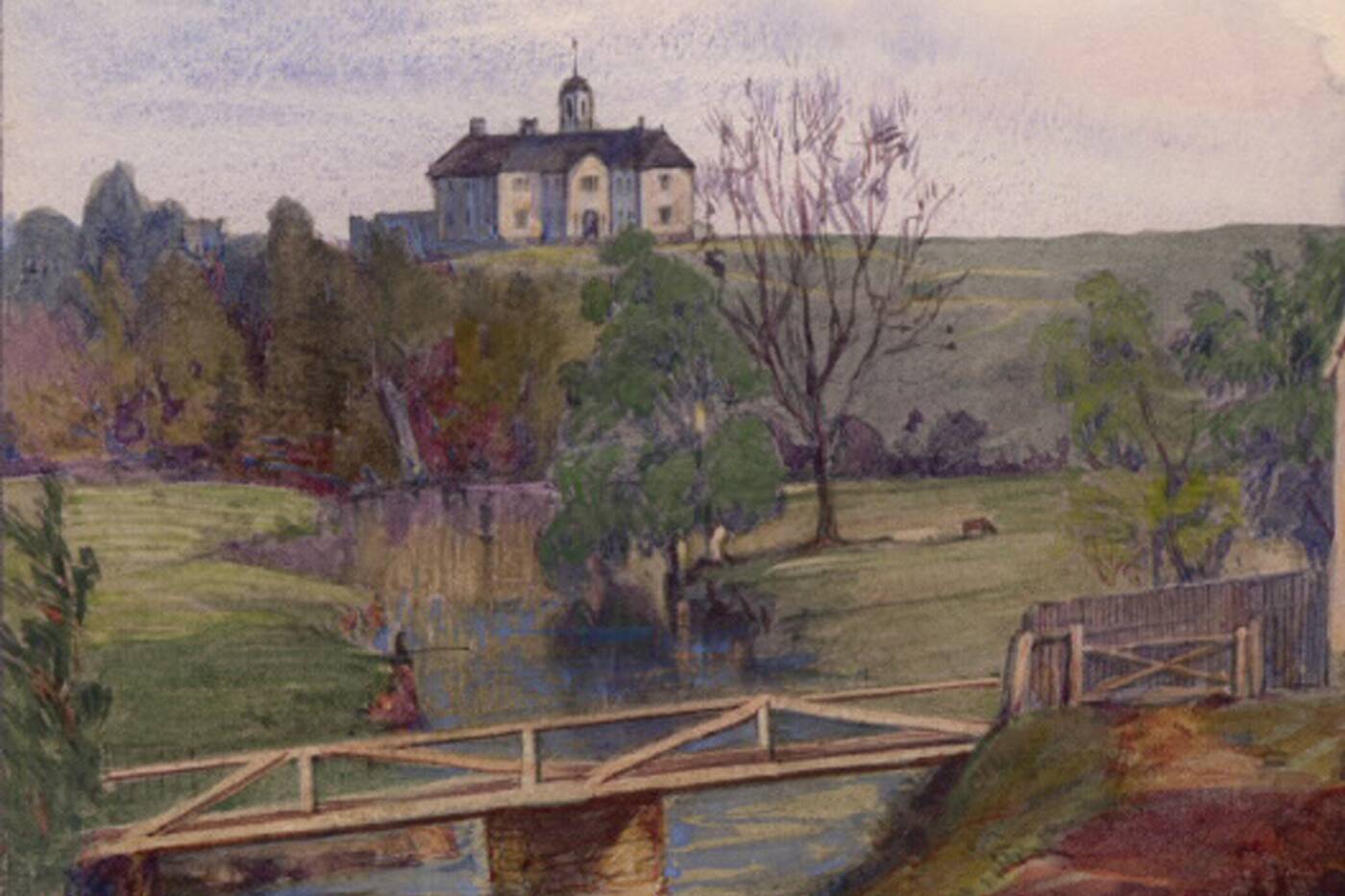 A coloured drawing of the House of Refuge in 1865. Photo by Toronto Public Library.

Over the next 50 years, it developed a reputation for treating infectious diseases and was eventually renamed Riverdale Hospital. Since 2002, it's been referred to as Bridgepoint Active Healthcare.

In 1886, the first baseball stadium in Toronto was built and called Sunlight Park. It cost just about $7,000 to build the all-wood structure that stood about four storeys tall. It was named after the nearby Sunlight Soap factory. 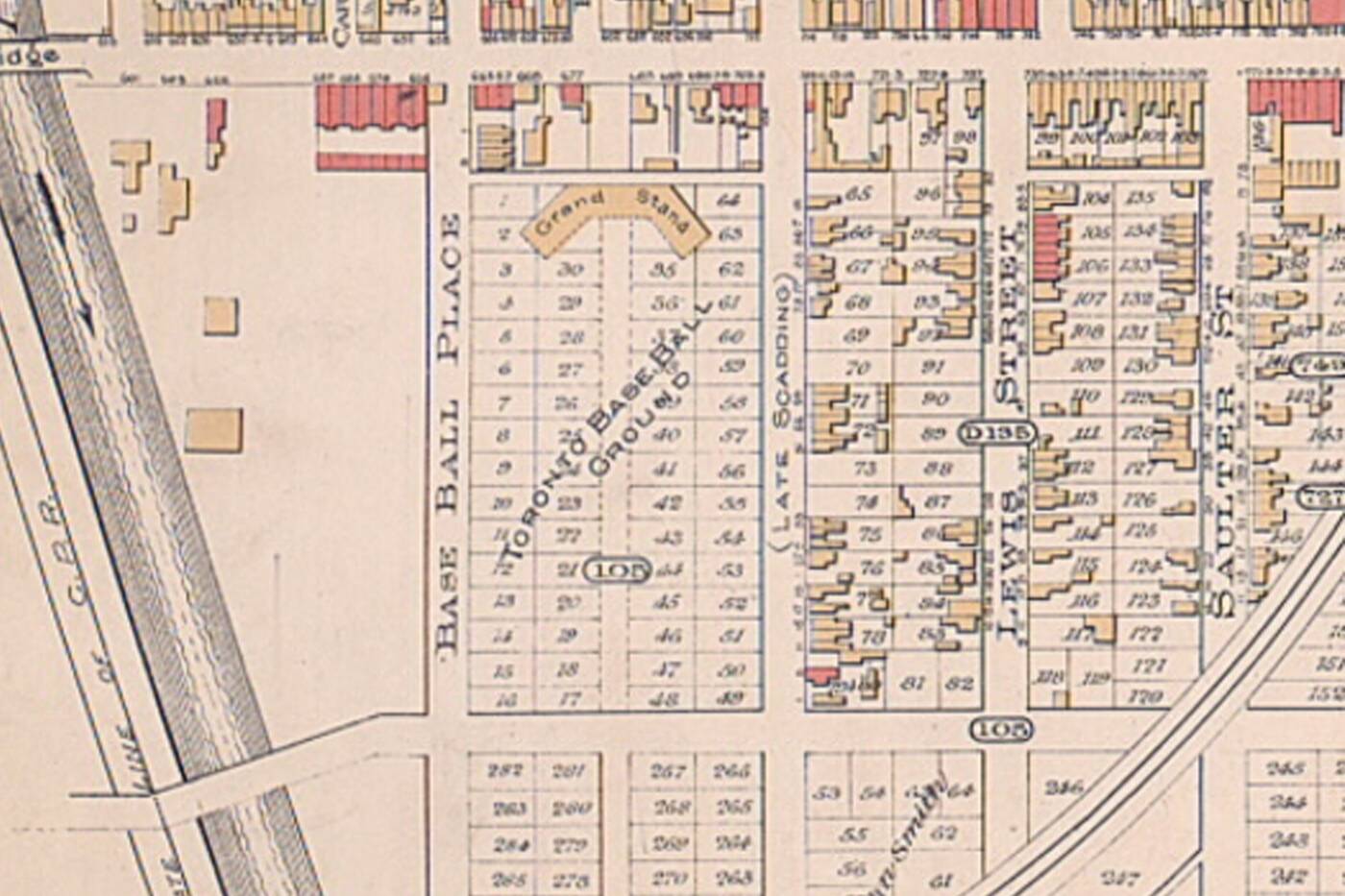 A map of the area of Sunlight Park in 1890. Photo by Library and Archives Canada.

The stadium was located just south of Queen Street East between Broadview and the Don River. Unfortunately, it was demolished in 1913 and the area was redeveloped for commercial use.

In the 1900s, Riverdale became an extremely industrial area of the city. It was home to printing, metals, food, and soap factories, which had a horrible impact on the environment and landscape. 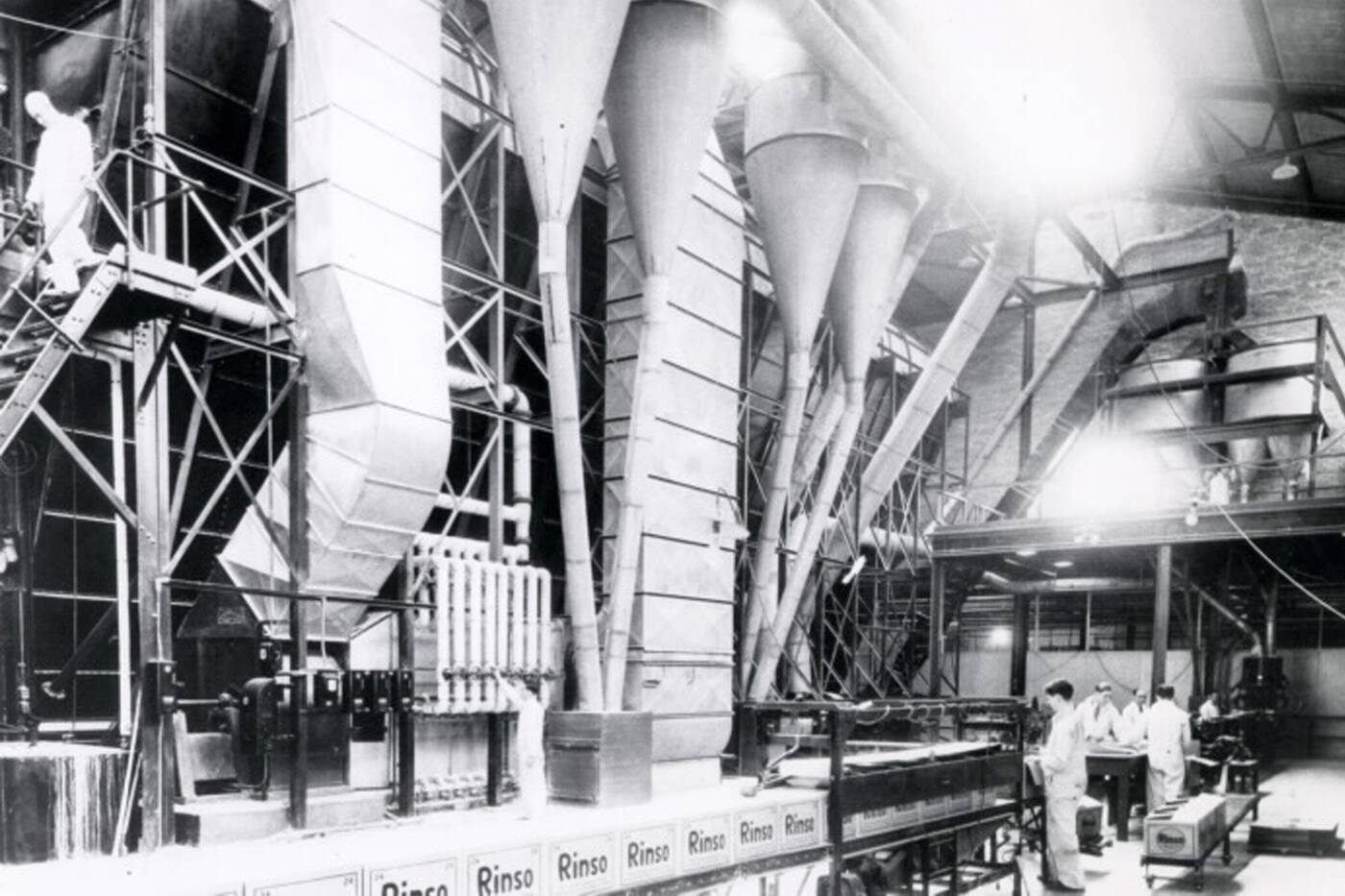 The Lever brothers' factory in 1920. Photo by Toronto Public Library.

Factory waste and blood from the slaughterhouses was often dumped into the nearby Don River. According to Best of Riverdale, "squatters, gangsters and criminals found refuge in the lower valley. It was a place for institutionalized "undesirables"–the poor, homeless, mentally ill and quarantined."

In 1911, the neighbourhood welcomed the new Queen Street bridge. It was made out of solid steel and linked all of the small neighbourhoods in the area.

This led to a surge of development of buildings and stores along the Danforth. While some have been rebuilt over the years, many remain standing to this day.

The Don Valley Parkway, or DVP, began construction in the 1950s. This caused great disruption of the river's natural order. To make up for it, the city added new recreational fields, a toboggan hill, a pool and other facilities. 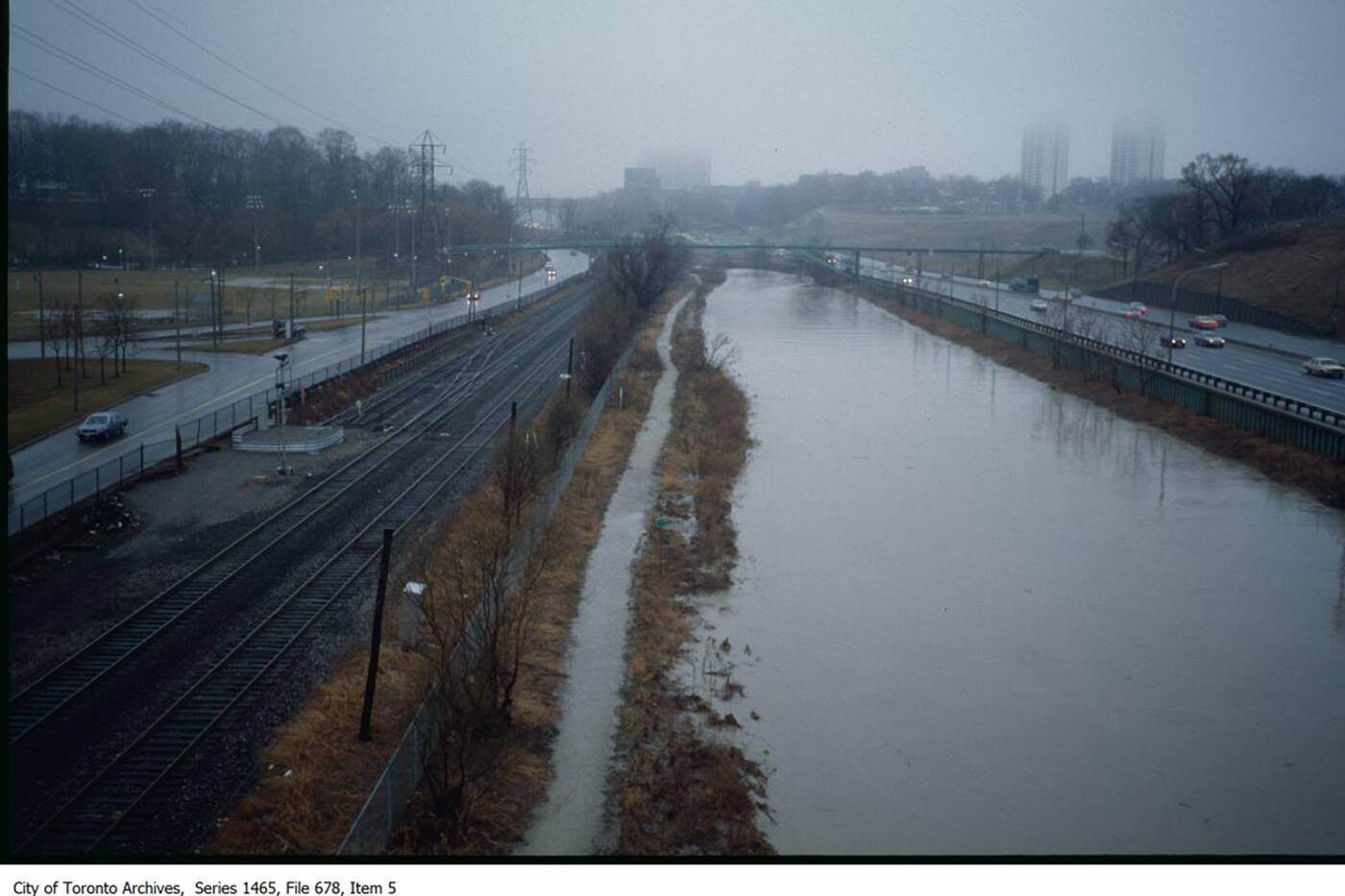 The Don River looking north in about 1990. Photo by Toronto City Archives.

Fortunately, a side effect of construction was that it cleaned up the valley in significant ways. However, "The Riverdale Plume" soon took over the area. Caused by local factories, amongst other things, this severe air pollution and smell flooded the neighborhood in the late 1990s. 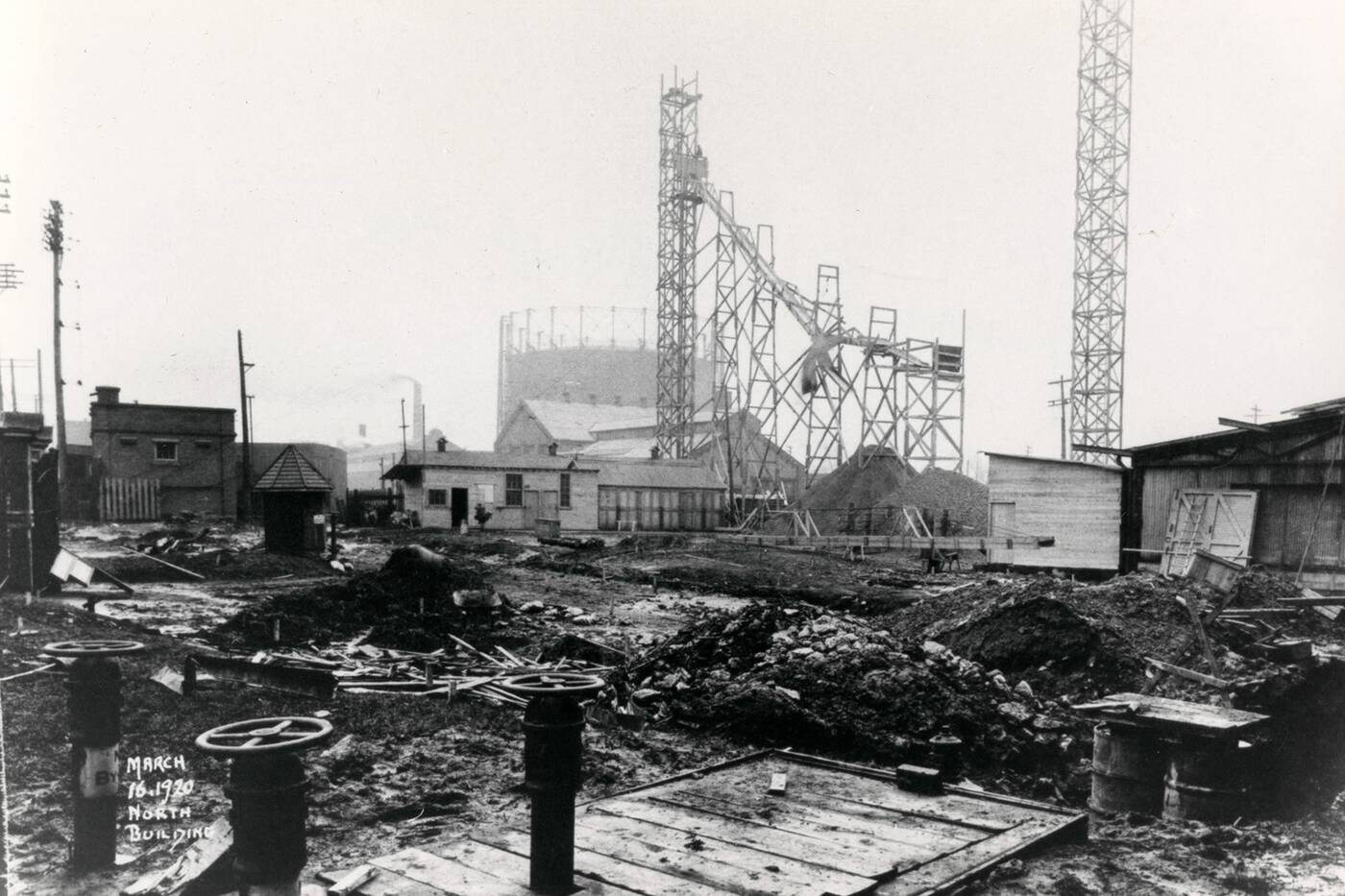 The Lever brothers' factory in 1920. Photo by Toronto Public Library.

This sparked several initiatives to help clean up the neighborhood. By the 90s, most of the polluted land became the city's responsibility to clean. Finally, in 2001 The Toronto Waterfront Revitalization Corp. was created to begin a 25-year project to revitalize the Don.

Over the years, Riverdale developed a reputation as a place of independent arts. Throughout the 90s its charm attracted artists, painters and actors. There are several independent galleries along Queen Street East and the area is known for the many movies filmed there, such as Good Will Hunting and X-Men. 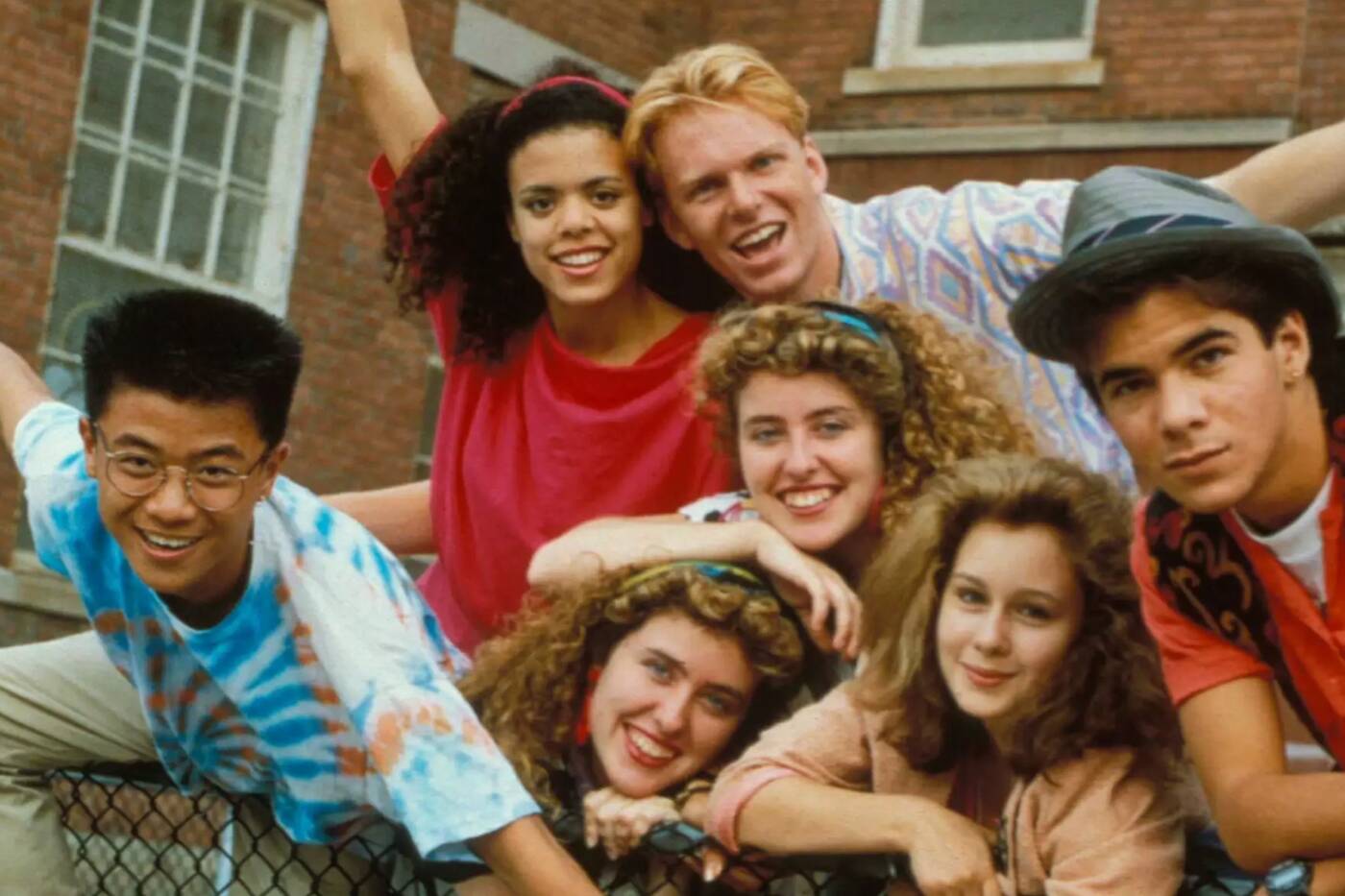 The Degrassi cast was one of the most beloved in Toronto's TV history. Photo by Degrassi.tv.

Riverdale's Degrassi Street was made famous after it inspired the hit television show Degrassi. Stars like Nina Dobrev, Stephen Amell and Drake all got their start on this Riverdale-inspired show. 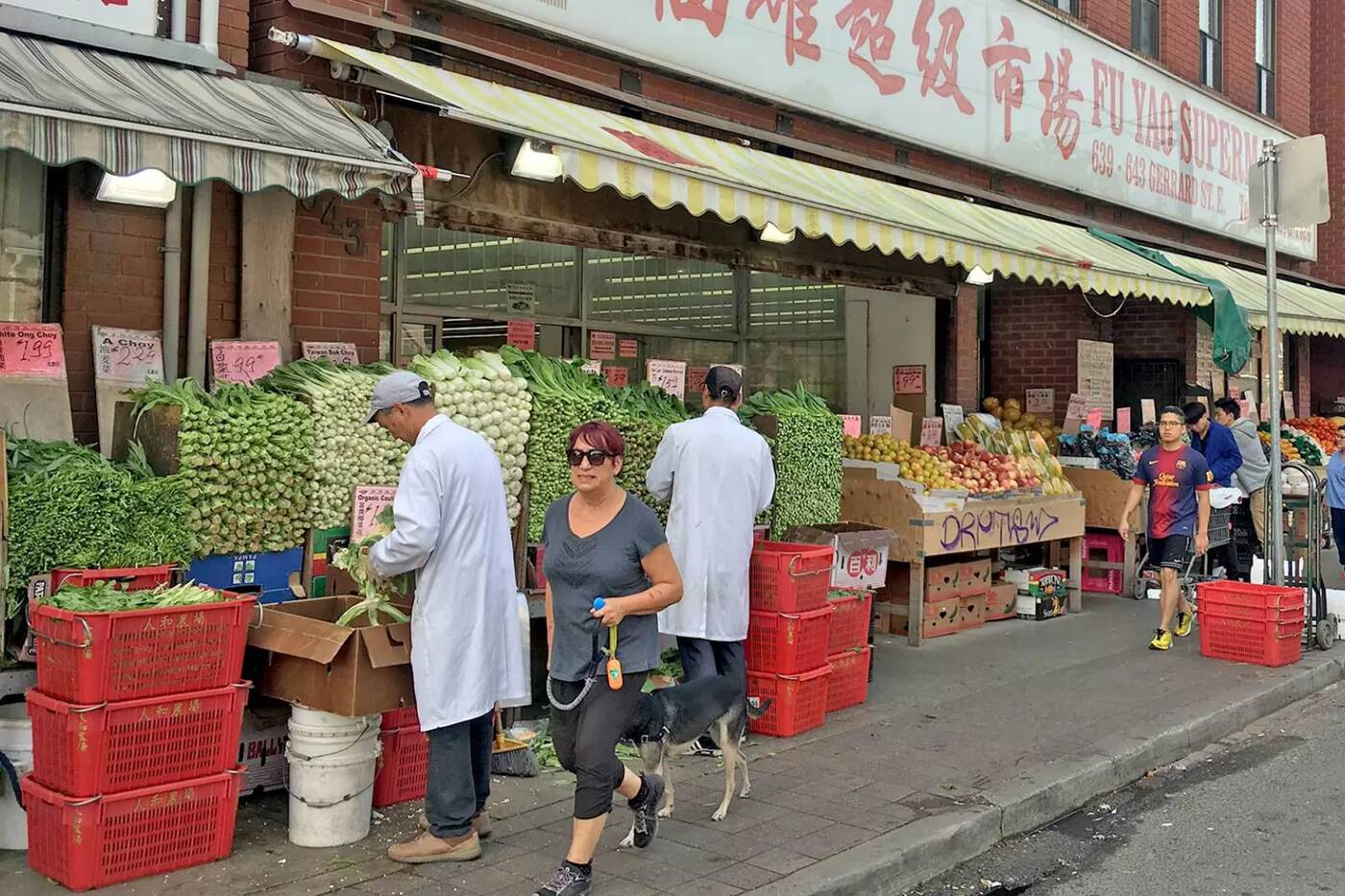 East Chinatown is found in the greater neighbourhood of Riverdale. Photo by blogTO.

If you walk through Riverdale today you will notice the many smaller communities that it encompasses. This includes everything from East-Chinatown to the Studio District and even Greektown.

While each has its own distinct look, history and traditions, they have all become known as the greater part of Riverdale. Because of this, the neighbourhood's history is a long but endlessly interesting one.