Imagine a 90-acre public green space running all the way from Queen's Park to the Toronto waterfront — one with pedestrian paths, bike lanes, native landscapes, performance plazas and cultural installations.

It's not impossible: In fact, it's probable that this will someday exist above the northbound lanes of University Avenue — atop everything east of the segmented medians currently running down the middle of this great and important street. 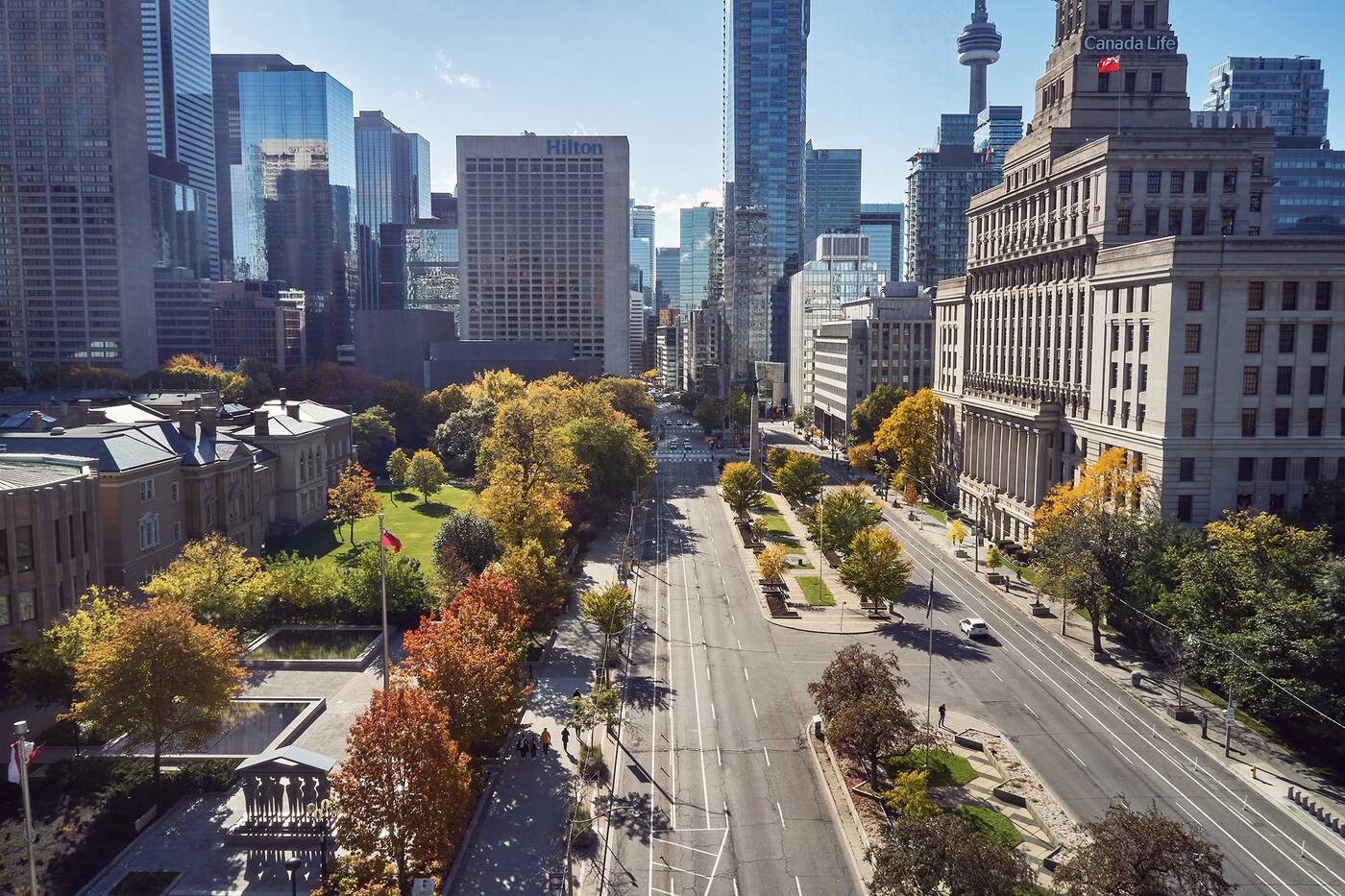 "At its core, University Park is a revitalization project," reads a release introducing the comprehensive plan, which would convert some 9.5 acres of city-owned asphalt and inaccesible green spaces into one seamless, continuous stretch of parkland.

"To achieve this vision, plans would permanently consolidate University Avenue to four lanes located on the western side of the roadway," reads the release. "A preliminary analysis of pre-Covid traffic volumes has supported the feasibility of these proposed roadway amendments."

"The park would provide abundant areas for outdoor recreation, contextualize often overlooked monuments along the avenue," the release continues, "and establish a destination that caters to residents, nearby employees, and visitors." 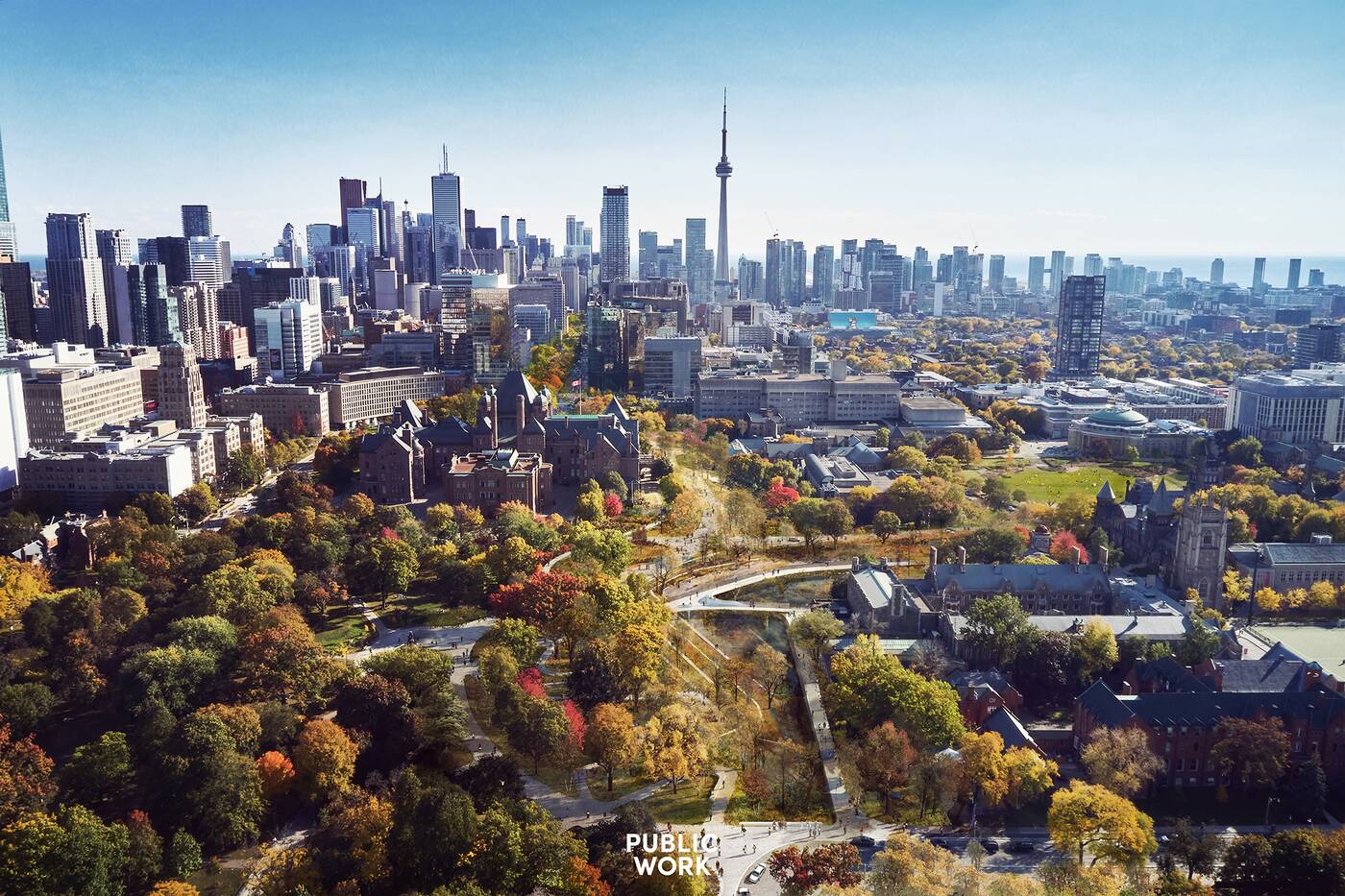 Renderings provided by PUBLIC WORK show what that might look like, with University Avenue permanently consolidated to four automotive lanes on the western side of the existing roadway. Image by PUBLIC WORK.

Evergreen and The Michael Young Family Foundation are collaborating with PUBLIC WORK (the celebrated planning and landscape firm behind The Bentway, Rail Deck Park, and TOCore) to bring this vision to fruition.

"While University Avenue has the ingredients of a grand civic avenue, its current form prioritizes vehicle lanes at the expense of public life. Today, public space is more important than it's ever been," says Adam Nicklin, a co-founder and principal at PUBLIC WORK.

"University Park reimagines this great street by putting people at the heart of the design. By making relatively minor adjustments to the existing streetscape, we can create a world class, signature park experience right through the heart of the city." 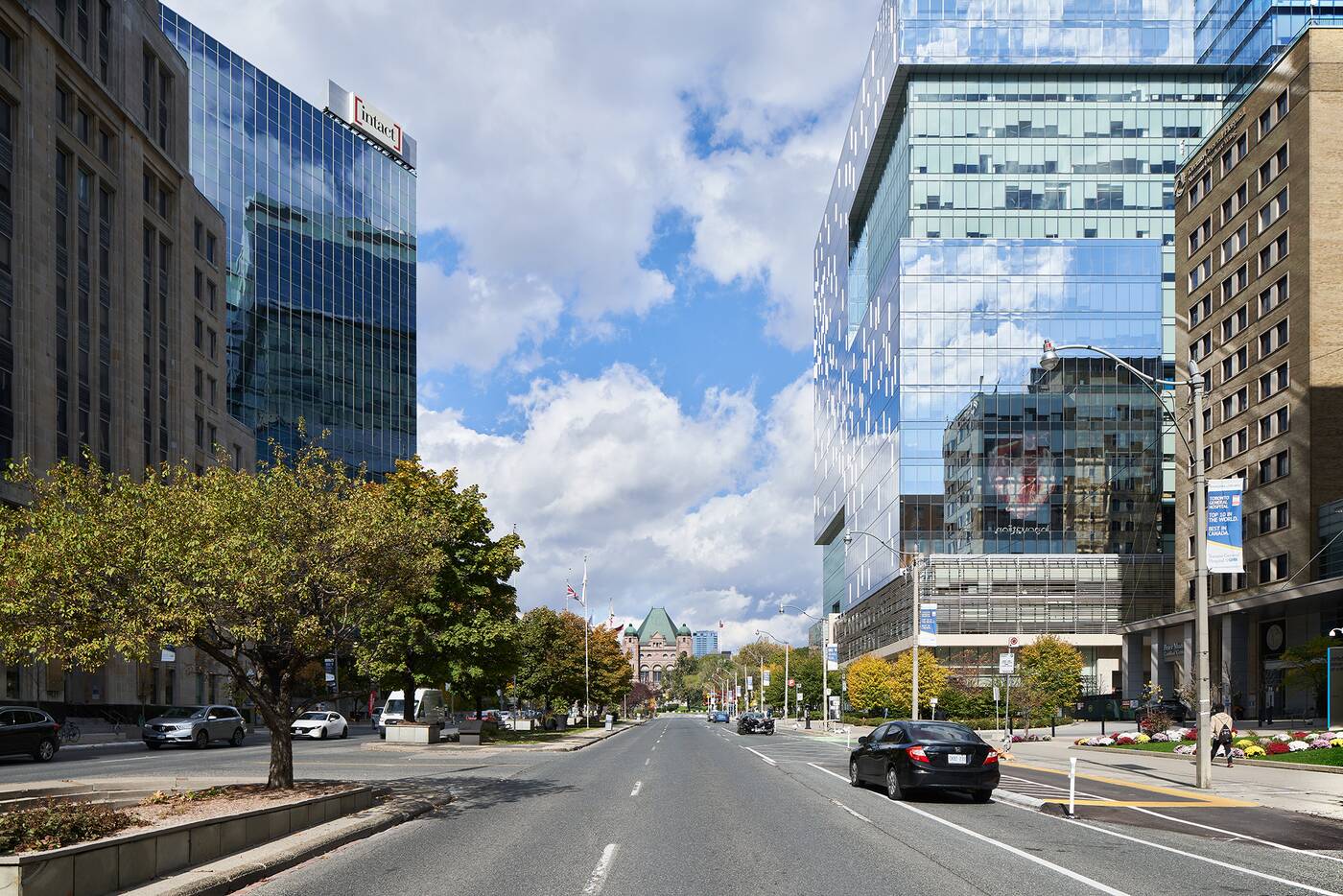 University Avenue in the middle of hospital row, looking north from Gerrard Street toward Queen's Park in 2020. Image by Michael Muraz Photography.

While plans for the park are said to be "in their early stages," the team behind the project is engaged in ongoing discussions with the City of Toronto, various stakeholders, and institutions along the street to "explore the feasibility and potential implementation of the vision."

Traffic studies and public consultations will of course be necessary before shovels hit the ground, and the Toronto-based charity Park People is currently working on a study of the area to inform plans as they evolve.

Several core principles have been guiding the design process to date, according to the project team, including "social harmony, climate resilience, community wellbeing, and growth and vitality." 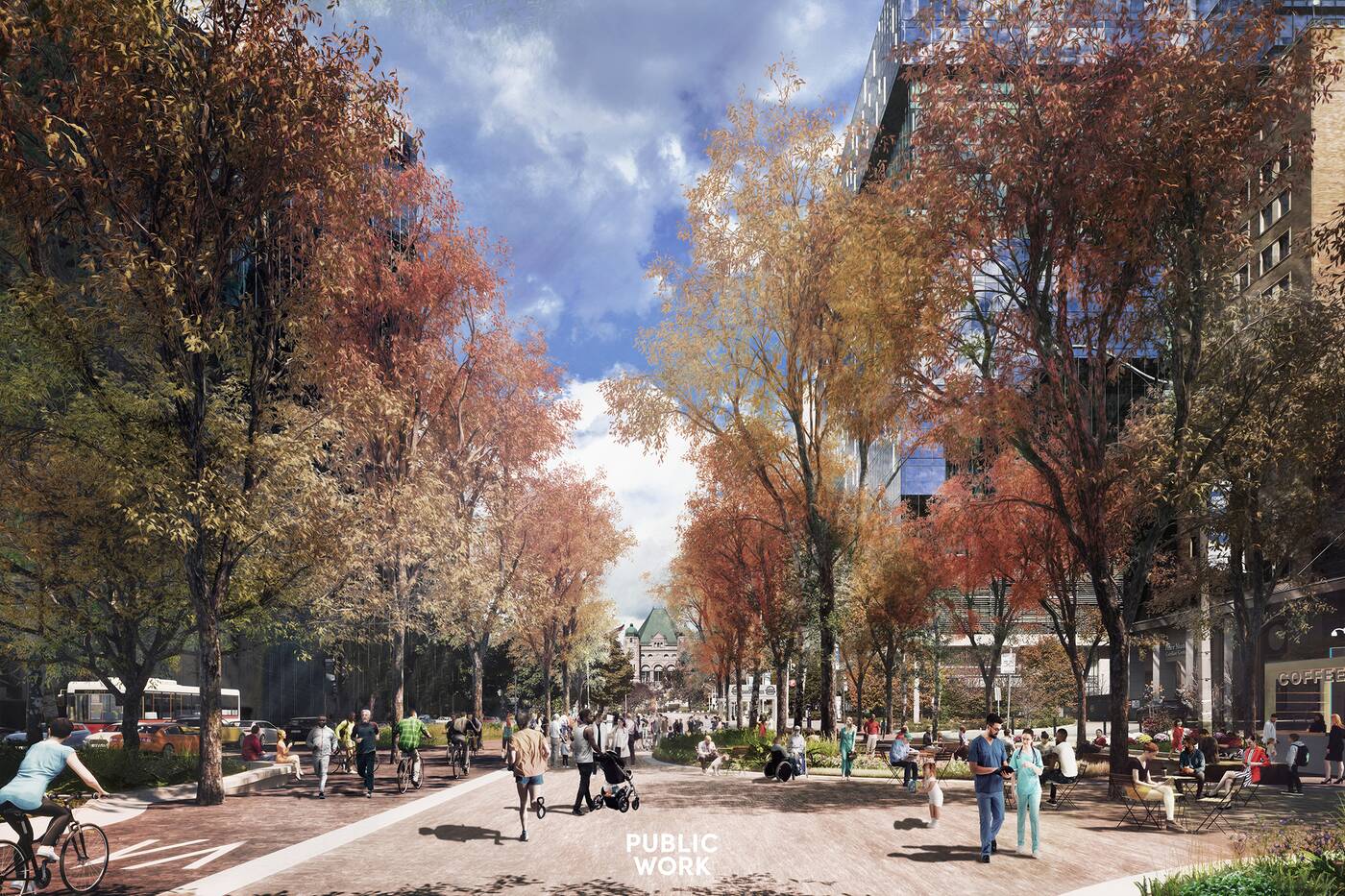 This rendering reimagines University Avenue along hospital row with plently of public green space and a new 'wellness district.' Image by PUBLIC WORK.

One of the more interesting uses of the space, as put forward by the University Park team, is the creation of a new "wellness district" with outdoor gathering spaces surrounding neighbouring hospitals.

"We have an opportunity to establish a wellness district that supports Ontario's leading hospitals and reinforces a commitment to community wellbeing," says Nina Pesavento of The Michael Young Family Foundation.

"The park would improve the quality of life for people who live in the Greater Toronto Area, as well as those across the entire province."