Did you know that the City of Toronto takes care of clearing snow and ice from roughly 81 per cent of all sidewalks in the city each winter?

You might not, if you live downtown, because this free service is only available to people in "newer" parts of the city, where sidewalks have been deemed large enough for mechanical plows to pass.

Under existing rules, the city is only responsible for keeping 6,400 km of the city's 7,900 km of sidewalks safe once cold weather hits — 100 per cent of them outside the downtown core — leaving everyone in Old Toronto, East York and parts of York to fend for themselves.

In fact, should homeowners in these areas choose not to clear their own sidewalks, they can actually face fines for... well, for essentially doing (or not doing, as it were) the same thing as their counterparts in Scarborough, North York and Etobicoke. 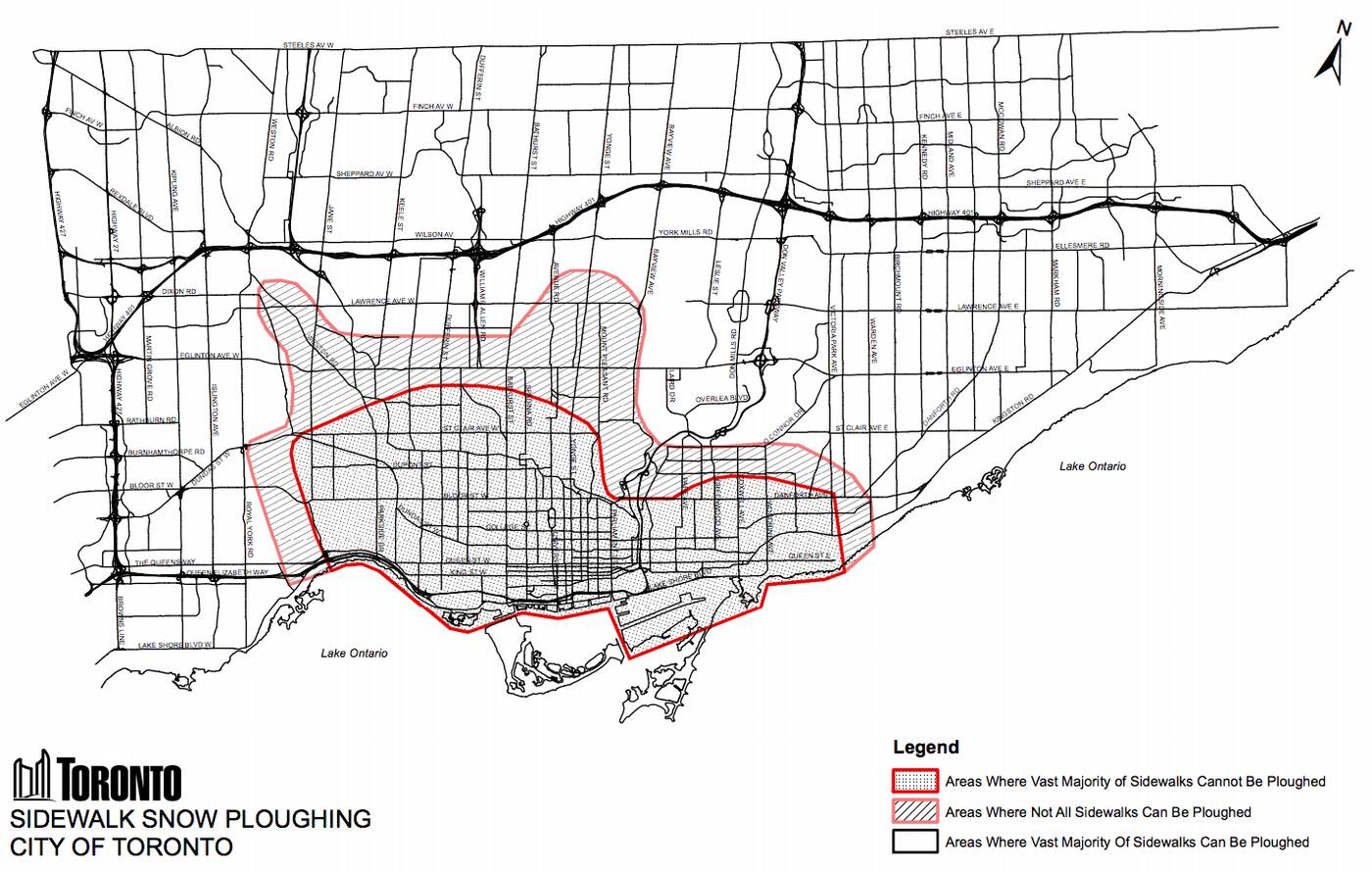 It's a longstanding system that has been criticized as unfair and dangerous over the years, but one that the city has so far refused to remedy on the grounds that "in older parts of Toronto, narrow sidewalks, obstructions and obstacles prevent plows from working safely."

City Councillor Josh Matlow is determined to the change this ahead of Toronto's first full, pandemic-plagued winter season, and the support he's been recieving so far in his mission has been overwhelming... at least among citizens.

The city's infrastructure and environment committee, on the other hand, just quashed a motion put forward by Matlow that would have eventually standardized sidewalk snow removal everywhere.

Critics are upset and confused about why Toronto is holding firm to this, especially as the pandemic's second wave heats up and outdoor spaces become increasingly critical for mental and physical health.

The City of Toronto is failing its residents by rejecting a motion to clear more sidewalks and bikelanes this winter. What could possibly be the reason? People need to move around, especially this winter. C'mon @JohnTory @cityoftoronto @bradrossTO https://t.co/TQH4SgGHtw

"Last winter, City Council called for improved standards for sidewalk snow maintenance due to valid concerns raised by residents that Toronto's current standards are completely insufficient in the downtown and centre of the city," reads Matlow's (failed) motion, which went before the committee last Thursday.

"With the COVID-19 pandemic forcing us all to be outdoors, the City of Toronto must prepare this winter season for an increase in the use of our cycling infrastructure and pedestrian traffic on our City's streets, sidewalks, and park amenities."

Matlow, seconded by Councillor Mike Layton, called upon city staff in his motion to investigate what types of equipment would be needed to clear downtown sidewalks, how much it would cost, and to develop a "comprehensive snow clearing plan for all paved pedestrian and cycling pathways."

The infrastructure and environment committee voted "nah," but city council could overrule the matter when it's debated later this month.

Not clearing snow & ice from sidewalks is a Safety, Human Rights and Legal issue for #Seniors and #Disabled @JohnTory needs to reverse this Now. #topoli #PWD #allyship https://t.co/MvWv188N3G

Matlow and his many supporters in this issue are now circulating a petition in hopes of changing things before truly nasty weather arrives.

"It is inequitable that residents in the former cities of North York, Scarborough, Etobicoke, and some of York receive sidewalk snow clearing while the majority of neighbourhoods in Old Toronto, areas of York and East York do not," reads a message accompanying the petition on Matlow's website.

"This is especially concerning given that the levels of pedestrian traffic are much higher in these areas. Residents of our City's inner suburban areas also frequently walk through downtown and midtown, and rightfully expect safe and accessible sidewalks too."

Many people agree with the Ward 12 (Toronto-St. Paul's) councillor and are showing their support for full sidewalk clearing services on Twitter.

Thank you for doing this. I have osteoporosis so even a small slip can do alot of damage. With all the construction the streets have icy patches so I can't avoid slippery spots on sidewalks by walking in the street. I added this to the letter I sent to council

"You would think there might even be some COVID relief money for this," tweeted one local to Matlow.

"You can't have people even more stuck indoors all winter because the city won’t clear sidewalks! If the little plows don't work, then yes, get out the shovels! It's a matter of public health and safety."

Health, safety, and, for some, crucial daily life tasks.

"This is going to be a major accessibility issue with disabled folks and seniors," pointed out one Toronto resident on Twitter. "This is a direct barrier for them to get around. It's completely unacceptable."

"Anyone considered people with disabilities, the poor — who walk rather than take transportation? Access to transit has to improve too," wrote another.

"Between the snow piles, tent patios... not much space for social distancing."