Toronto’s dog fountain in Berczy Park has long attracted crowds of both people and their pets, but you may never have noticed a connection between the dog, cat and bird sculptures that sit around it.

The dog fountain opened in the summer of 2017 and replaced an older fountain in the square. The 3,606 square metre public park located in the triangle of land between Wellington, Front and Scott streets was designed by Montreal landscape architects Claude Cormier + Associés.

The two-tiered fountain has 27 dog sculptures – and one cat – situated around, in, and on the fountain, each spraying water from its mouth in the warmer months. A golden bone sits atop the fountain. The fountain is sometimes decorated for the holidays.

Toronto resident Ratib Alif told blogTO he regularly walks to the fountain with his partner, but on Sunday, a friend of his visiting from out of town noticed something interesting about where the dogs and cats are looking, Alif told blogTO. Alif posted a series of TikTok videos about the discovery.

In his first video, which has three million views, Alif points out the dogs are looking at the bone, of course. But a lone cat, looking terrified surrounded by dogs, is looking in another direction.

"That cat obviously doesn’t care about the bone, so where is the cat looking?" Alif asks in the video.

He turns to show the cat's point of view, which makes it clear the carved creature is looking at two tiny sculpture birds sitting on a post.

Others wanted to know what the birds are looking at, which led Alif to continue looking for other connections.

One commenter suggested the birds are looking at worms, but this is not the case, according to Marc Halle, a landscape architect at Claude Cormier.

"There is no worm," said Halle, though he confirmed the connection between the cat and the birds was intentional. 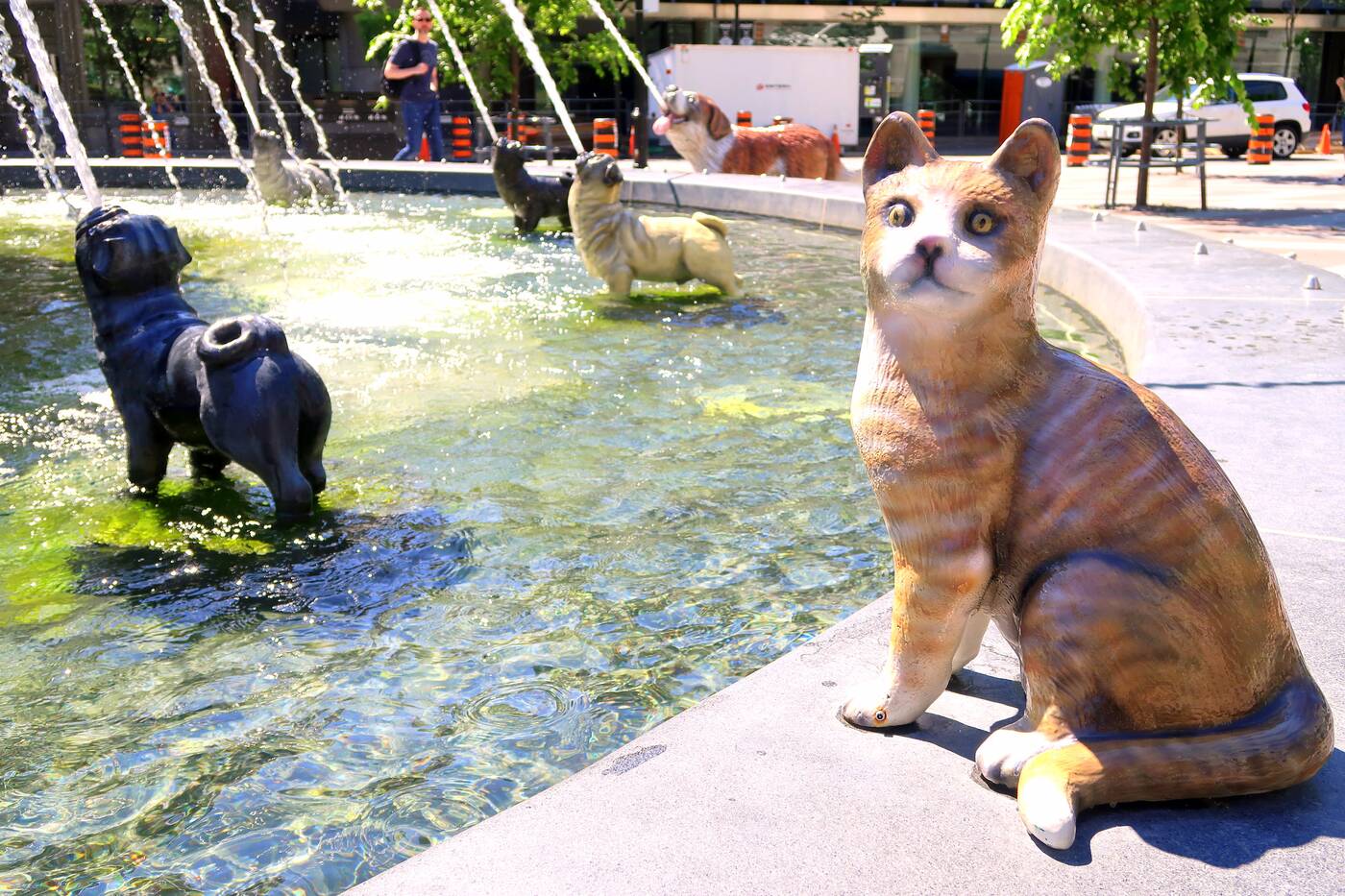 This cat is looking in a different direction than all the dogs at the dog fountain. Photo by wylispoon

"Originally it was a dog fountain, kind of like a dog-eat-dog world. The dogs are looking at the bone – the object of their desire - but the cat doesn't care. The cat has its own objects of desire, which are the birds," said Halle.

There is one other cat in the park who is looking at a tower across the street.

Halle said the connection between the cat and birds was mentioned at the opening of the park, but is not posted anywhere. He said the fact that people made the connection on their own is encouraging.

"It is a good testimony to more things like that in parks – people get it," he said.

The same firm has created a cat park design but Halle couldn't say when the cat park would be built.