Canadians are anxiously looking southward as the votes for the 2020 U.S. Presidential Election continue to be painstakingly tallied, while countless Americans look into how they can immigrate north if Trump wins yet again.

For those unfamiliar with the Great White North, bustling Toronto seems like a good place to land, given that it's considered downtown Canada and all. The city has also long been compared to New York (though some would quite fairly argue that we hardly come anywhere close to the enormous, diverse metropolis).

In the characteristic spirit of Canadian kindness, one Toronto resident has drawn up a handy map splitting the city into NYC's main boroughs to help those Americans fleeing their country for the 6ix figure out where to settle.

The hilarious rendering has gotten a ton of traction on social media so far, mostly due to the fact that people think the creator got the division of the city completely wrong.

I can only assume this has been made by someone who has been to neither New York nor Toronto. https://t.co/JRaBPX02Ba

Key pain points include how far north Manhattan goes — almost all the way to the 407, really? — as well as the designation of East York and Scarborough as Brooklyn, which is known for being not just a cheaper alternative to the island, but also a hipster haven, particularly the neighbourhoods of Greenpoint and Williamsburg.

The entire lakeshore from the central Harbourfront all the way to Scarborough Village is also depicted as suburban-esque Staten Island, a choice that seems to be solely based on the fact that this part of Toronto is on the water.

It also considers a huge swath of the west end — from Bathurst all the way to the 427 — to be Queens, and then anything north of the 401 and west of Downsview to be the Bronx, which likewise feels inaccurate.

"Pretty sure south of Davenport and west of Jarvis to East of Bathurst would be Manhattan. Definitely not North of Eglinton!" one Facebook user aptly said of the map.

"Scarborough is definitely Queens, but I appreciate their effort," another added.

And yet another: "So is cottage country the Hamptons?"

Many also felt left wanting of further distinctions, wondering where specific neighbourhoods like Harlem, Hell's Kitchen, SoHo or Greenwich Village would be.

And a whole lot of people are just sick of the comparison being drawn between the two vastly different cities at all.

it's part of the torontonian identitly really

In response to the viral rendition, another citizen created a far different version of Toronto-turned-NYC that feels like a slight improvement, albeit still a little lazy and off-the-mark.

This second map moves Queens eastward instead, encompassing Scarborough and anything east of Victoria Park, essentially, with East York and all neighbourhoods directly south of it — including Danforth, Leslieville, and the Beaches — constituting Brooklyn.

North York is quite fittingly left out of the picture (sorry, anyone north of Eg), while Manhattan appears bounded by Parkside/Keele to the east, Eglinton to the north, Bayview to the east, and, of course, the lake to the south.

Some justifications for these decisions were provided, such as the fact that Scarborough would be Queens because "it's the most multicultural of them all," while Toronto's the Bronx should be "lower income households in poorer, more dense areas" (ouch).

Finally, Etobicoke is Staten Island because it's "still kind of it's own deal and almost belonging to Mississauga," which would apparently be New Jersey. 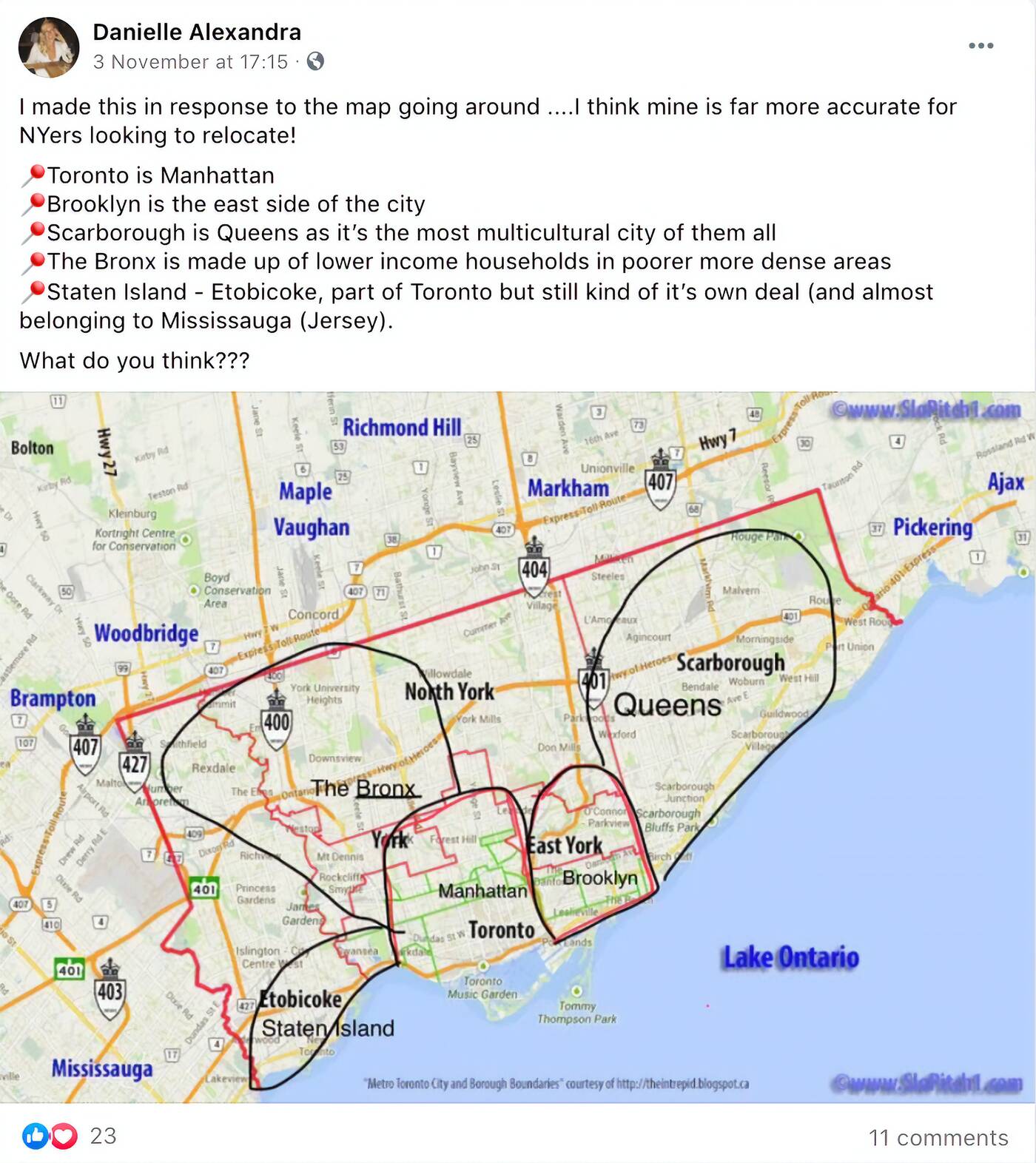 With so many opinions on the matter arising in just a few days, we'll surely be seeing more ways of divvying up Toronto as New York or some other major American city.

Though we may not seem to measure up in some senses, we're extremely lucky to call T.O. home for so many other reasons, especially right now.