Living on a private lane like Percy Street in Toronto's Corktown neighbourhood really isn't all that private when you think about it. It's comparable to condo living; small spaces, thin walls, prime locations, and a built-in community.

The major difference, though, is the amount of history that is baked into the foundations of the homes that line the street.

Percy Street is one of Toronto's 250 private roads and laneways. The street itself, and the collection of homes that line it, are tiny. Established between 1885 and 1890, it was once a place for Irish workers of the nearby Gooderham and Worts Distillery. 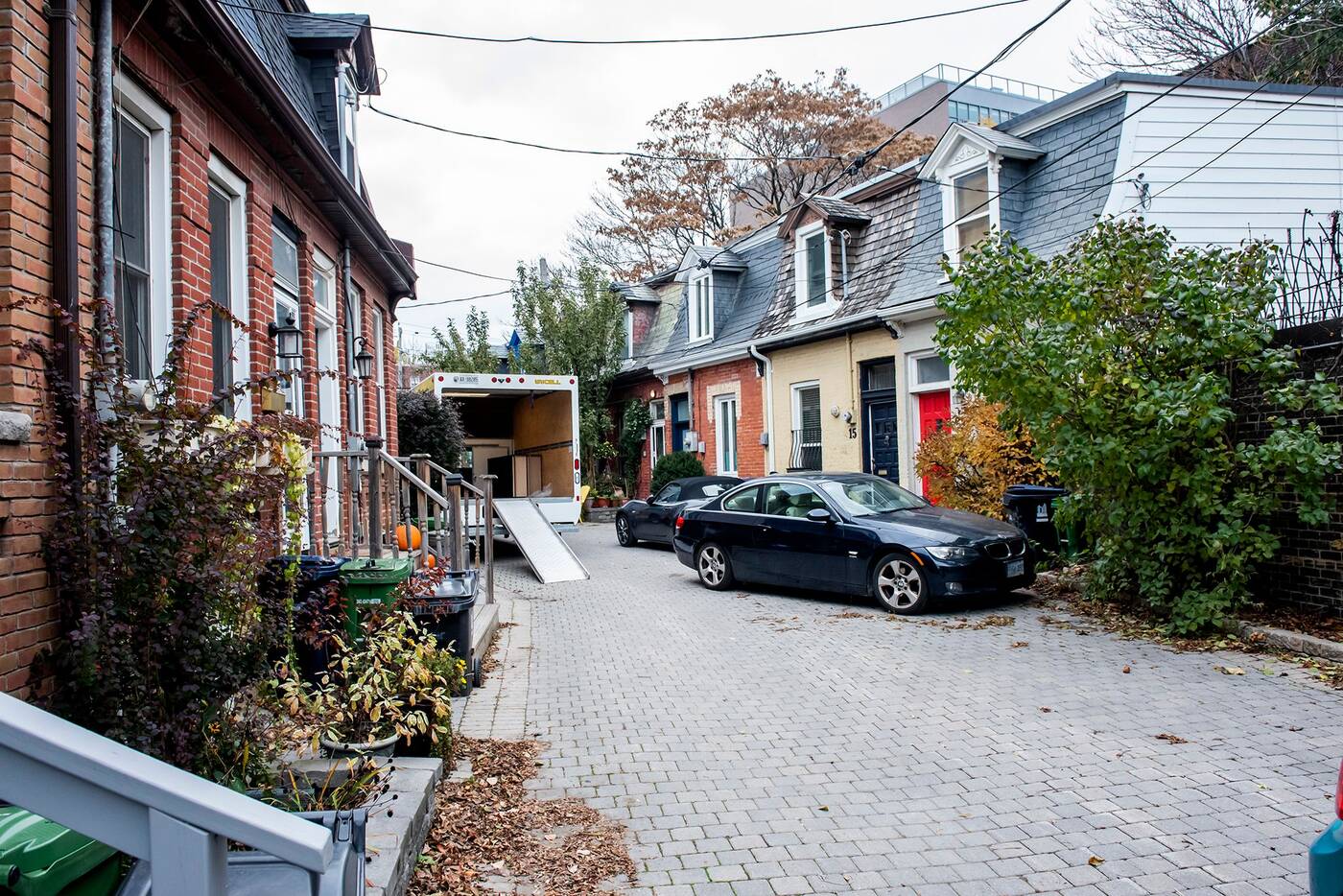 A view of Percy Street in Toronto. Photo by Hector Vasquez.

Cynthia Wilkey, who bought her 700-square-foot home on Percy Street in 1988, told me, "Something overtook me, and I just ended up buying it."

Wilkey, a retired lawyer and co-chair of the West Don Lands Committee lived on Percy Street for 23 years, and has stories only residents of private streets would relate to. Things like broken water mains, snow and garbage removal are all tasks that the people of Percy must take care of themselves.

The most fascinating story is one that, to this day, remains somewhat of a mystery. On the second day of renovations in 1988, workers that Wilkey had hired to completely gut the place found a stash of cash in the rafters. 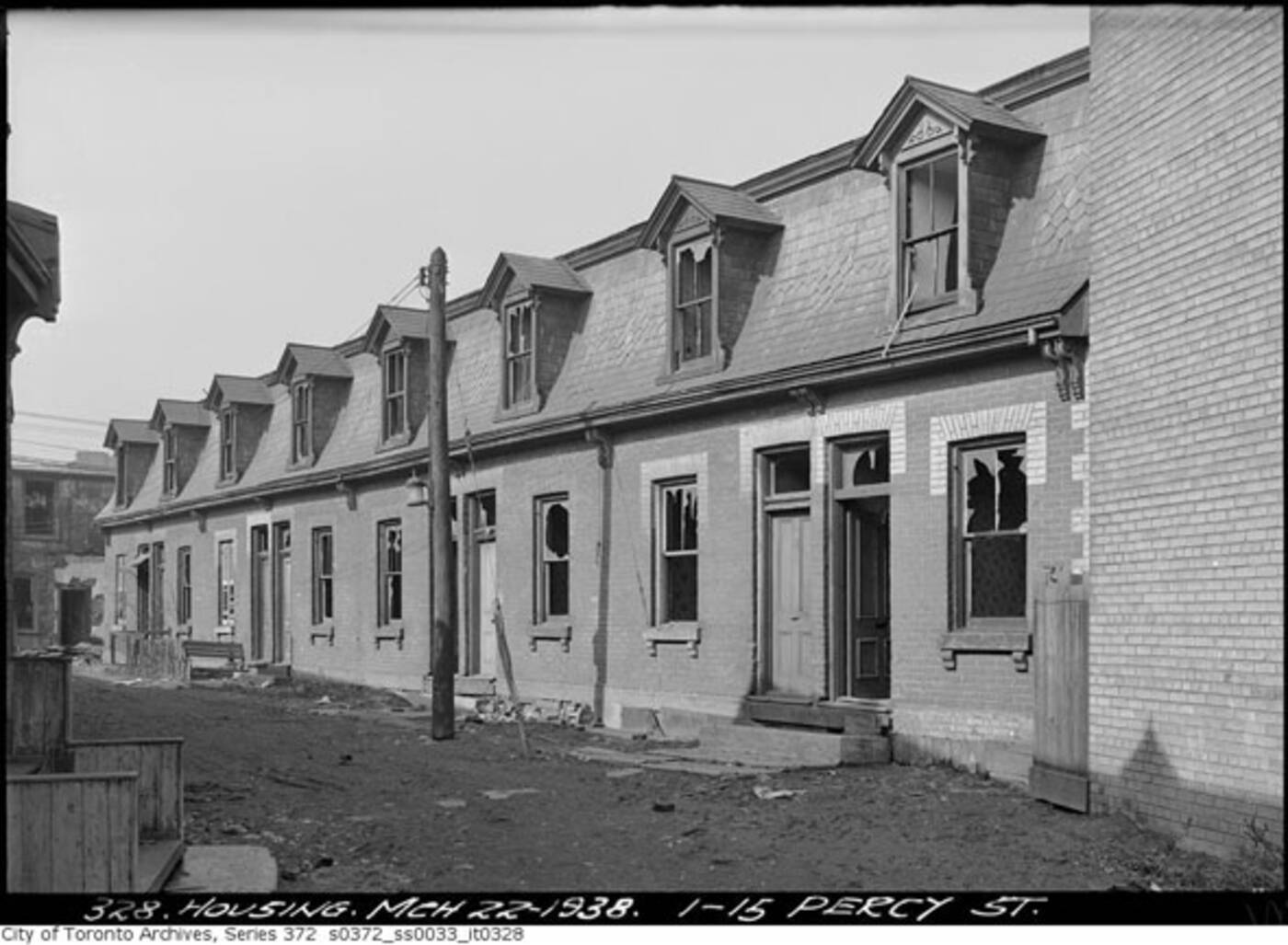 What Percy Street used to look like. Photo via Toronto Archives.

Not believing their luck, the workers did what anyone would do, "they put it into $1,000 piles, and when they reached 50 piles [...] they started rolling around in it, and playing with it." Not long after, the honest contractors turned it in.

Five years later, in an unprecedented court proceeding that resembled the fictional Jarndyce and Jarndyce case from a Charles Dickens novel, the money was split between Wilkey (the homeowner), the workers who found it, and the previous estate owners, who claim they had no idea it was there.

Though the true owner of the stash was never found, it is believed that it belonged to a former owner who worked as a driver for the nearby Brick Works. Due to the history of bootlegging in the area, it's possible the cash was related to these sort of activities.

"If he'd been socking away that money, it's hard to imagine that he would not have told his wife when he knew he was dying," Wilkey says when asked where she thinks the money came from.

"It's possible that a neighbour was stashing it," Wilkey muses. The homes were connected by small tunnels in the basement, but also through the rafters. Percy Street was also a known bootlegging area up until the 1980s, so that also could have accounted for it, but "nobody really has any idea," she admits.

Listen to Season 2, Episode 8 of the blogTO podcast

Former Percy Street resident of 23 years, Cynthia Wilkey, talks about what it was like to live on a private laneway in Toronto's Corktown neighbourhood.

Plus, she touches on the mysterious wad of cash that was found in her rafters during renovations in 1988, and the unprecedented court case that followed.