Two tenants living in The Annex are being evicted for the second time since the pandemic began, and the couple believes their landlord is simply acting out of retaliation following their ongoing organizing efforts with Keep Your Rent Toronto.

MaryAnn and Christopher had been organizing with other neighbourhood renters who'd been financially impacted by the pandemic and could not afford to pay rent when they received an emergency eviction notice back in May.

Both had lost income as a result of the public health crisis and had been withholding rent while requesting to negotiate some kind of payment plan, as countless other tenants in the city did at that time, though they say their landlord refused to budge and claimed she was in no financial position to provide any kind of rent relief.

Then, after MaryAnn, Christopher and other tenants in their neighbourhood sent out a collective letter to multiple landlords saying they were sticking together to deal with any retaliation, they received an N7 emergency notice citing postering and a physical attack as the reasons for eviction.

"It was scary," Christopher said. "We got pretty stressed out and freaked out and thought, 'Are we going to get kicked out of our home?'"

Back in March, the provincial government introduced a temporary ban on residential evictions. But N7s, which are eviction notices for "seriously impairing safety" of persons or "wilful damage" to property, were exempt from this moratorium.

"It was clear at that point that it was an intimidation tactic," said MaryAnn, who explained that these kinds of notices are usually issued when there is a real safety threat present such as gang violence or drugs.

The notice referenced a police visit brought on by a physical attack that did take place, though Christopher explained that he was the one who had been assaulted by a stranger pretending to be a landlord, not the other way around.

MaryAnn sent a video of the altercation to blogTO, and it shows Christopher being pushed around by another man and he does not appear to have fought back.

The notice also cited numerous visitors to their apartment as a grave safety concern, though MaryAnn and Christopher claim the only visitors they had at the time were other organizers dropping by to pick up bundles of posters, and physical distancing was always practiced.

MaryAnn and Christopher spoke out about the situation when their landlord first tried to evict them, and the story was covered in a VICE article published on May 25.

Shortly after it was published, they say their landlord agreed to drop the first notice and negotiate.

The promise was short-lived, though, as MaryAnn alleges the landlord quickly rescinded her offer to negotiate, once again stating that she was in no financial position to help — despite the fact that she reportedly spent a substantial amount of money on surveillance cameras (which MaryAnn and Christopher believe are meant to target them specifically), mulch for the garden, window cleaning and to file the eviction application.

"If you're willing to have all this money spent on having us kicked out, why not just lend a hand," Christopher said.

MaryAnn and Christopher have kept up their organizing efforts with tenants in their neighbourhood since that time.

Now discussions among neighbours have broken out after the presentations.

Tenants talk about the need to increase communication and coordination within and between buildings in the neighbourhood.#NoCovidEvictions pic.twitter.com/SvE7d8WA9S

MaryAnn has, however, since returned to work and Christopher has been getting CERB, so they were able to settle up their debt and no longer owe any outstanding rent.

Recently, however, they were served with two new notices and are being evicted from their home once again — though this time, they say they're not scared.

The couple has been served with another N7 notice for "seriously impairing safety" of persons or "wilful damage" to property, as well as an N5 notice for "substantial interference with reasonable enjoyment." 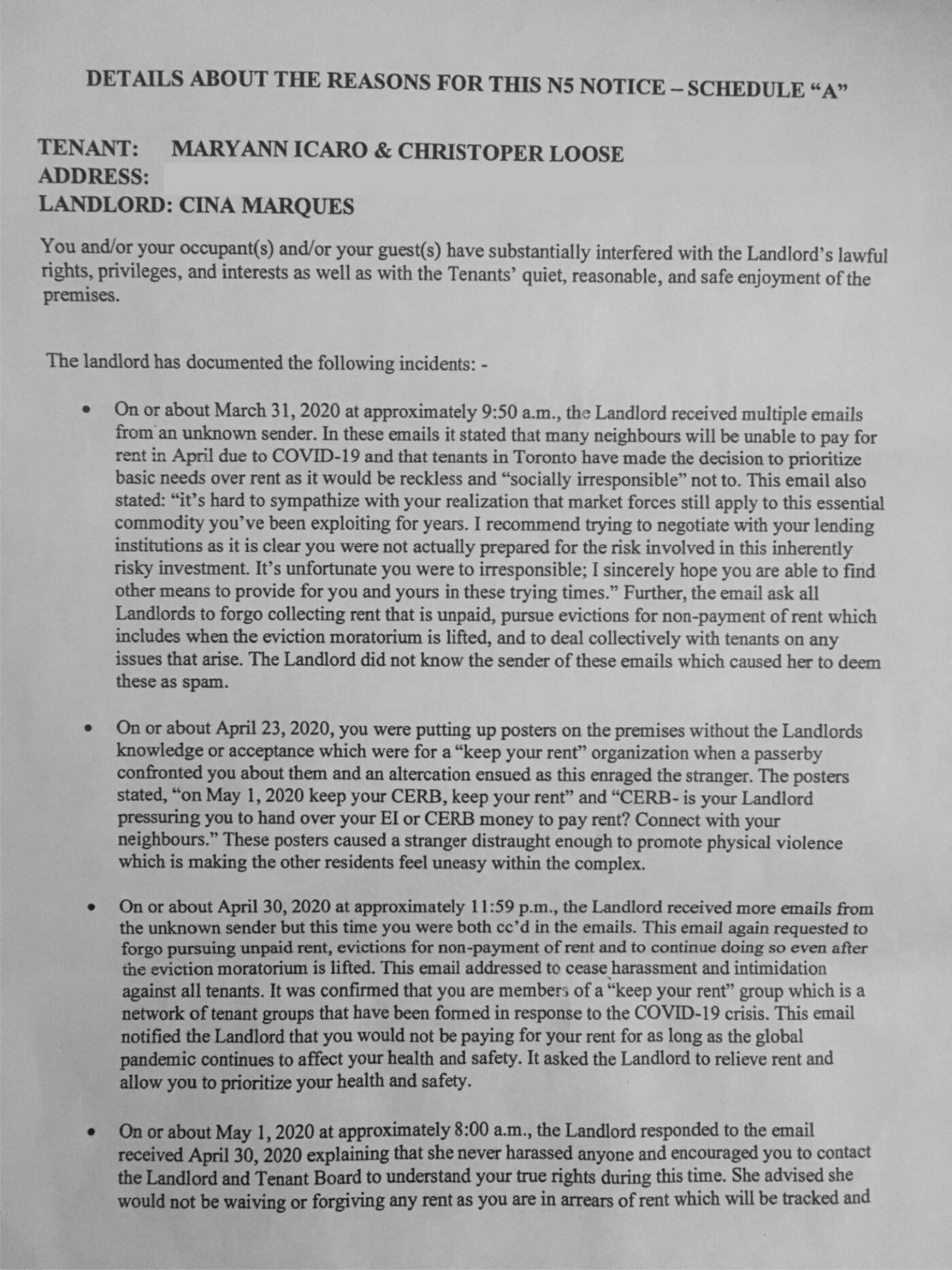 Six pages of eviction notices, photos of which were sent to blogTO, cite a number of instances as reasons for eviction, including what the landlord describes as harassing phone calls and emails, and putting tenants in danger by bringing outside visitors to the apartment during a pandemic.

It also cites pulling out plants from the garden and eating them, blocking off the laundry facilities, keeping some of their personal belongings in the garage, and putting up Keep Your Rent posters on the premises.

But MaryAnn and Christopher allege many of these accusations are fabricated, and the ones that are rooted in fact have been grossly exaggerated. 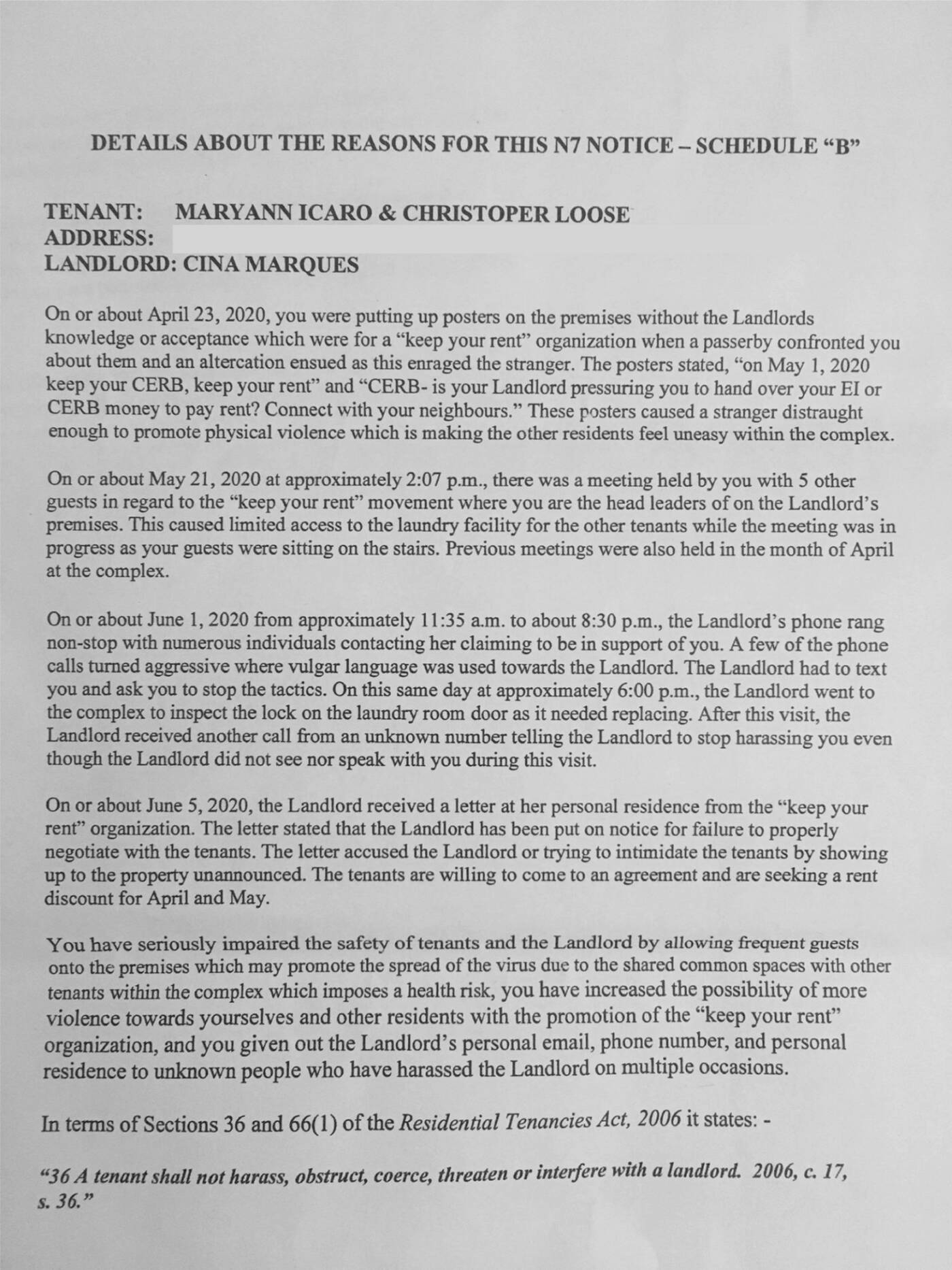 "It's pretty obvious that she wants to penalize us for having the gall to suggest she shave a few hundred dollars off our rent during a crisis," Christopher alleges.

They say the phone calls and emails described are simply mass letters and notices that have been sent out by tenants to landlords all over the neighbourhood, and the people that have come to their apartment were actually Christopher's family members coming for a visit.

And in regards to the incident where the landlord says MaryAnn pulled plants from the garden and started eating them, she says in reality she was simply smelling a mint plant, but this wouldn't even be grounds for eviction if it was true.

The posters, they added, have only been put up around the neighbourhood and not on the actual premises, as they pointed out it would be counterproductive to put up posters on the walls of their own apartment.

The landlord in question, Cina Marques, as well as the paralegal she hired to help evict the couple this time around, both declined to respond to blogTO's requests for comment.

Cole Webber, a legal clinic worker in Parkdale, says he does not believe any of the tenants' actions are grounds for eviction and that it's not uncommon for landlords to target renters with retaliatory threats of eviction for asserting their rights and forming tenants' organizations.

"Personally I do not believe the landlord has met the test for 'substantial interference' let alone 'seriously impairing safety' in the reasons stated in the eviction notice," he said.

"In this case the landlord appears to feel threatened by the tenants forming an organization with other tenants in their neighbourhood. Beyond this, vacancy decontrol provides landlords with a financial incentive to evict sitting tenants so they can raise rent without limit on the vacant unit."

Through their experience organizing with other tenants throughout the pandemic, MaryAnn and Christopher say they've learned to stand their ground and have no intention of moving out.

"At this point, these paper threats don't scare us. We've been organizing with our neighbours… and preparing for these exact attacks," MaryAnn said. "We're not going to wait for a judge and a hearing to tell us that we can stay in our home."

They say if the landlord does have any intention of applying to the Landlord and Tenant Board, which opened on Aug. 1, it will be extremely backed up and, if it ever does go to trial, they're confident she has no case.

Landlords have filed 6083 evictions with the LTB during the shutdown.

Landlords have issued eviction notices to thousands more tenants and not yet filed.

Tens of thousands more tenants are behind on rent, face threat of eviction, and have not yet received an eviction notice.

This is why Webber, MaryAnn and Christopher all say talking to neighbours, defending one another and collectively putting pressure on landlords is one way to prevent the mass evictions many fear are inevitable thanks to the lifting of the eviction ban and the passing of Bill 184, which allows landlords to evict tenants without a proper hearing.

"We know landlords are not incentivised to relieve tenants.. or help tenants during this time. They've made it their project to use this covid crisis to evict poor tenants and raise rents to market rent," said MaryAnn.

So, Christopher added, tenants have no other choice but to stick together.

"We can try to build networks and rely on each other," he said, "and defend against mass displacement and evictions."