Toronto is in the midst of a seemingly unprecedented pandemic, but near the beginning of the century, its citizens were on lock down, just as we are today.

A century ago, Toronto was in the throes of the Spanish Flu, considered the world's most lethal pandemic to date.

An early relation to the H1N1 virus, the plague first emerged during the WWI in March 1918, and afterward went on to kill between 20 and 50 million people across the globe and around 55,000 in Canada.

It hit Toronto in late September, and just as COVID-19 is doing now, the highly contagious and previously unknown form of influenza forced public health officials and governments to call for early forms of social distancing.

People were told to avoid streetcars and large gatherings, though initial warnings were pretty lacklustre, and "normal living" was the favoured prescription for combating the infection, according to T.H. Whitelaw, Edmonton’s medical officer of health.

Unlike the present day, the use of surgical masks was initially recommended across Canada, though there was definitely no scramble for N95 masks. In fact, wearing a mask was eventually deemed ineffective and kind of silly. 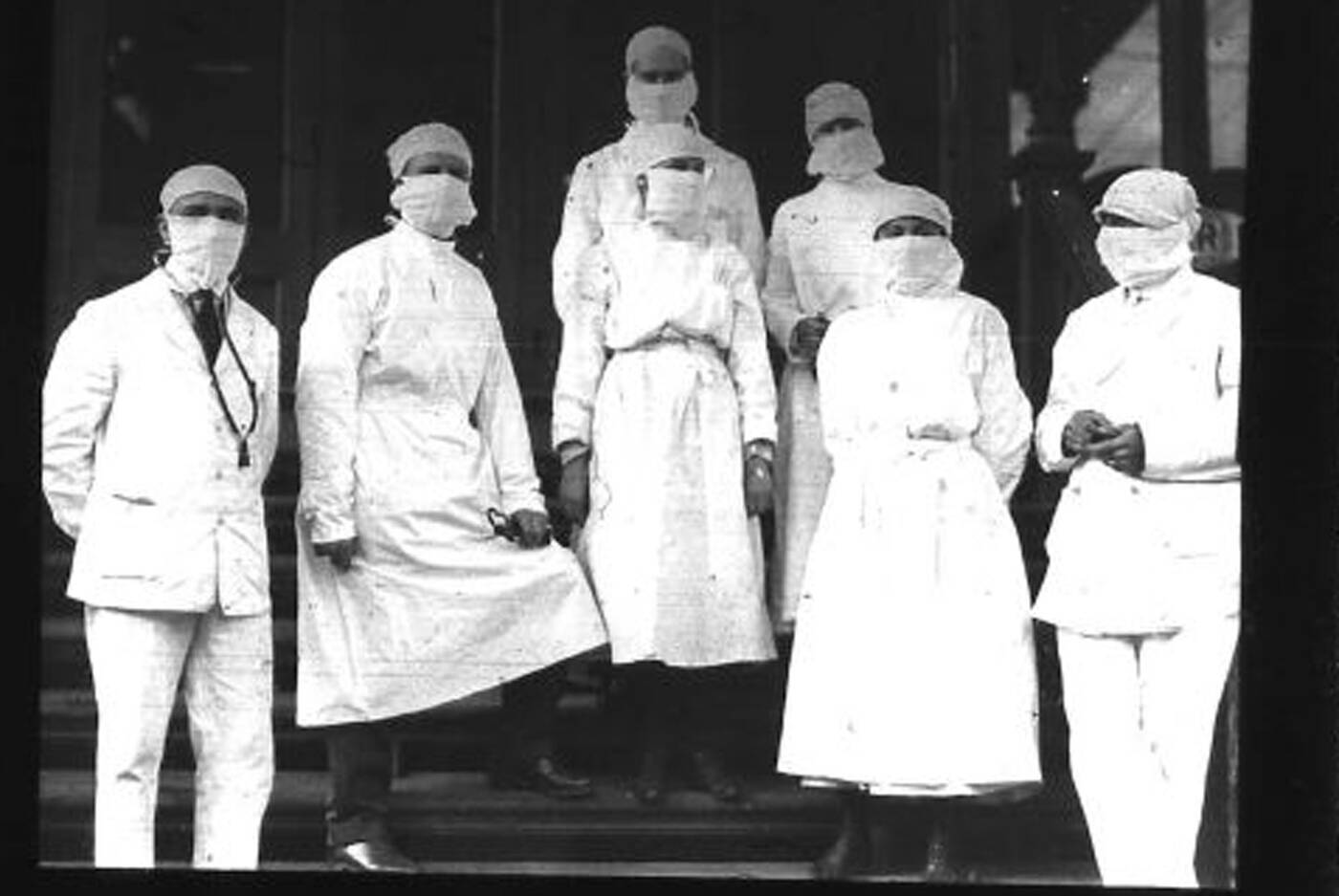 A photo of doctors and nurses in Toronto during the Spanish Flu pandemic of 1918. Photo via St. James Cathedral/Toronto Archives.

"The number of cases continued to increase after the Province of Alberta ordered everyone to wear a mask outside the home and public confidence in it as a prevention soon gave place to ridicule," wrote Whitelaw in the December 1919 Canadian Medical Association Journal.

According to Canada's History, "Whitelaw was adamant that quarantine, used against scarlet fever and diphtheria, was impractical with the flu."

A paper by Dr. Mora Dianne Guthrie O’Neill about Toronto's Royal Alexandra Theatre touches on the venue's closure on October 10, 1918, when newspapers first issued an announcement from Toronto's Medical Officer of Health at the time, Charles J. Hastings.

"Notice is hereby given that after Saturday, October 19th, all Theatres, Moving Picture Shows and other places of amusement, including Pool Rooms, Billiard Rooms and Bowling Alleys, throughout the city shall be closed during the period of the influenza epidemic, and shall not be reopened until further notice."

By October 16, boards of health across the province ordered all public places, including churches and schools, to be closed. Elevators were restricted to four passengers at a time, not including the operator.

But while all non-essential businesses have been forcibly shut down today, according to records, most shops in 1918 remained open — which Dr. John McCullough, the chief officer of Ontario’s Board of Health at the time, noted as counterproductive.

"...the utility of closing churches, schools, theatres etc. is obviously limited when department stores, business places and street and railway cars are allowed to carry on business as usual," he wrote in the November 1918 Canadian Medical Association Journal.

According to researcher Jamie Bradburn at TVO, closing orders in southern Ontario had largely been reversed by mid-November.

In fact, November 11, which marked the end of the First World War, drew huge crowds out to the streets across the province.

That definitely didn't help the spread of the Spanish Flu, but the closest equivalent today would be telling people they couldn't go out for the Raptors Championship Parade — imagine that.

That being said, there are drastic differences between the Spanish Flu and today's novel coronavirus.

Unlike COVID-19, where most deaths have been reported among seniors, the majority of 1918's diseased were people in their prime, with majority of the victims being young adults between the ages of 20 and 40.

On top of that, the country and the world at large was in the midst of the the First World War, where more than 60,000 Canadians, mostly in that same demographic, were killed in service. Medical and nursing staff were also depleted thanks to the wartime efforts.

Symptoms, however, are similar. What could begin as mild flu symptoms — like chills, cough, fever and headache — progressed to respiratory distress that could be fatal, making the Spanish Flu's transference hard to detect, and in turn, hard to isolate.

Of course, the advent of airplanes has made COVID-19 more contagious than the Spanish Flu — which travelled by boat and train — could ever be.

Out of 300,000 cases in Ontario, 8,705 deaths were recorded thanks to the Spanish Flu, though the real numbers are likely more. Out of an exponentially growing number of more than 670 cases in Ontario, COVID-19 has caused 9 deaths so far.

Without the Spanish Flu, the federal government wouldn't have founded the Department of Health in 1919, which has since become the same Health Canada that oversees the agencies now telling us to self-quarantine in the first place.