The safety of frontline workers in Ontario is being put under immense pressure as hospital shortages are becoming severe across the province.

Mask rationing has been experienced throughout Ontario’s hospitals as healthcare workers are told to ration their use to one or two per day.

On Friday evening an alarming memo was sent to frontline workers in Hamilton. 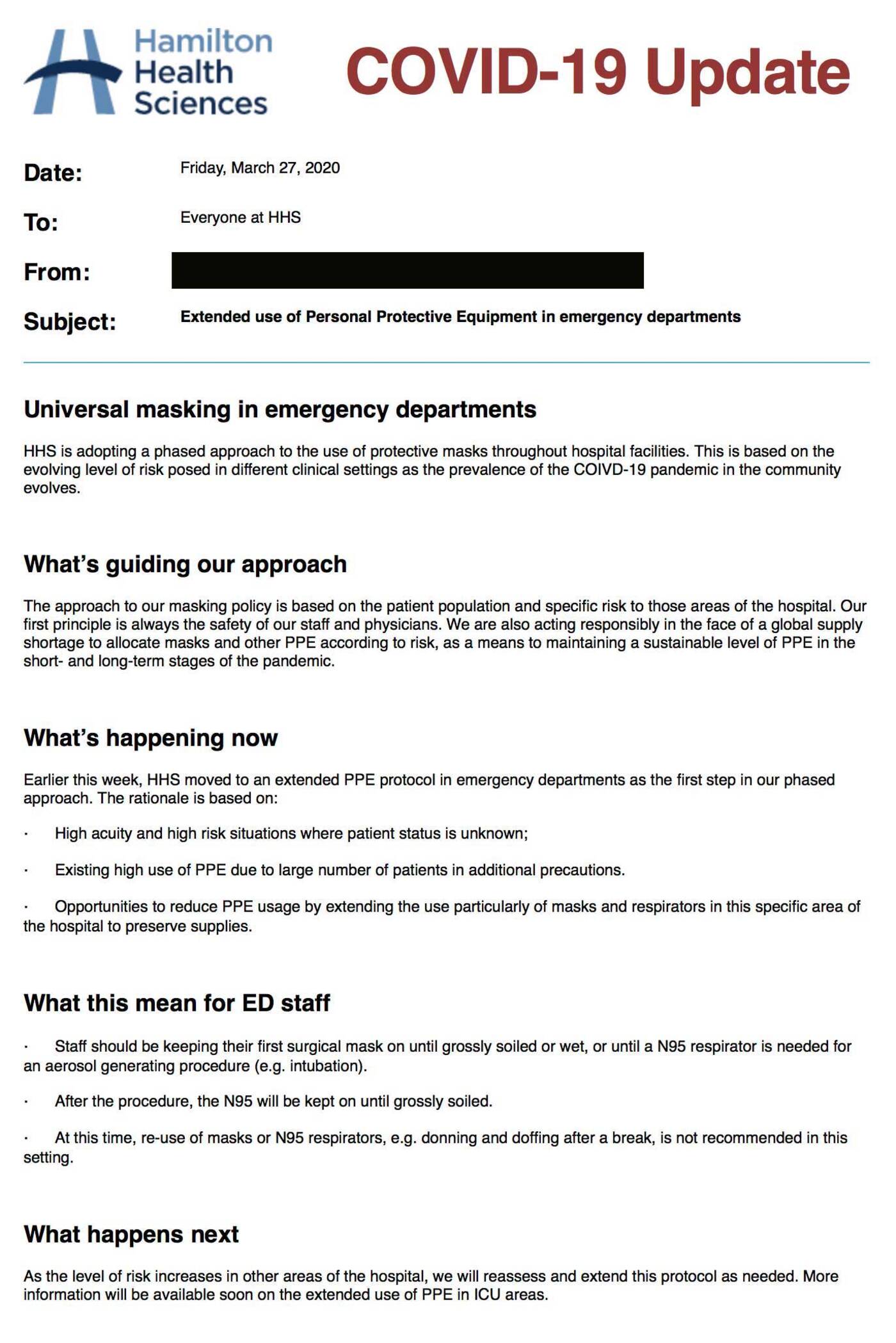 A copy of the memo sent to healthcare workers advising them to continue to wear masks until "grossly soiled".

After being made aware of the memo Sunday afternoon, Dr. Doris Grinspun, head of the Registered Nurses’ Association of Ontario (RNAO) stated that she has, “alerted the minister that this memo must be replaced by one that reflects government directives used by hospitals that follow best practices.”

According to Grinspun best practice dictates that if a surgical mask is dirty it should be replaced well before becoming grossly dirty. “I have never seen a memo stating to wait until a mask is grossly soaked,” said Grinspun. “That is outrageous and places nurses and patients at risk.”

Grinspun believes the primary problem, however, is not with the hospitals but with the scarce resources and poor preparation provided by the Ontario government.

According to Grinspun, the RNAO has been trying to pressure the Ontario government to prepare more aggressively for a worst case scenario since at least February but faced resistance as officials believed the danger to Ontario to be low.

The result has been serious shortages of desperately needed equipment.

Personal Protective Equipment (PPE), ventilators, surgical masks and N95 masks are all in short supply and Ontario currently has near the bottom in ventilators per capita in Canada.

Grinspun believes the issue is no longer simply about scarce resources but believes the government continues to underestimate the scale of the crisis.

Ontario would need to purchase at least 217-million masks to prepare properly for a worst-case scenario. This would anticipate frontline workers using nine-million masks per week in Ontario.

The Ontario ministry of Health stated in a memorandum to health providers on Saturday that 12-million masks have been ordered, as well as 10,000 ventilators, 12-million gloves, and 5-million N95 respirators.

When these supplies will arrive is an open question and testing backlogs continue to haunt the Ontario government’s ability to know what the actual infection rates are.

Confirmed positive cases of COVID-19 continue to double about every four days in Ontario but that might be just a snapshot of where Ontario was seven to ten days ago due to lab delays.

Currently Ontario has 1,355 confirmed positive cases with 211 new cases as of Sunday morning.

Ontario is able to lab test about 4,000 samples a day. Backlogs peaked at nearly 11,000 last week and, according to the Ontario government, were down to 7,203 on Sunday. Ontario is experiencing the largest testing backlog of any province.

Self isolating will slow the spread of the disease but countries that tested widely and contact traced positive tests back through their communities quickly were best positioned to minimize the impact on their health care systems.

Amir Attaran is a professor in the School of Epidemiology, Public Health and Community Medicine at the University of Ottawa and has been alarmed by how slow all governments in Canada have been to prepare for COVID-19.

“Singapore is able to do contact tracing in two hours,” noted Attaran. “We’re not even getting tests back for more than a week. if you don’t have prompt test results, then it becomes impossible to isolate people who have acquired infection in a timely enough way to prevent them from infecting their family or others.”

Attaran believes that unless individuals know they are positive, they are less likely to properly self isolate.

“If an individual tested on a Monday, they won’t know if they’re positive until Friday. They’re told to lock themselves up in self isolation but they’re not necessarily going to do that. They then go out and see others and those people become infected. If they had been given their test result on Monday night they would know to take it seriously.”

“To anyone who believes the federal government or the provinces have prepared well that is absolutely false,” said Attaran. “We are not as bad as the US but it’s not simply a question of asking which one of us has failed worse - we too have failed. Success looks like South Korea, Taiwan, and Singapore."

Email and phone requests to the Ontario Ministry of Health have not been returned.