The emergency alert that jolted people in Ontario awake on Sunday morning warning of an "incident" at the Pickering Nuclear Generating Station was sent by mistake, according to the province. 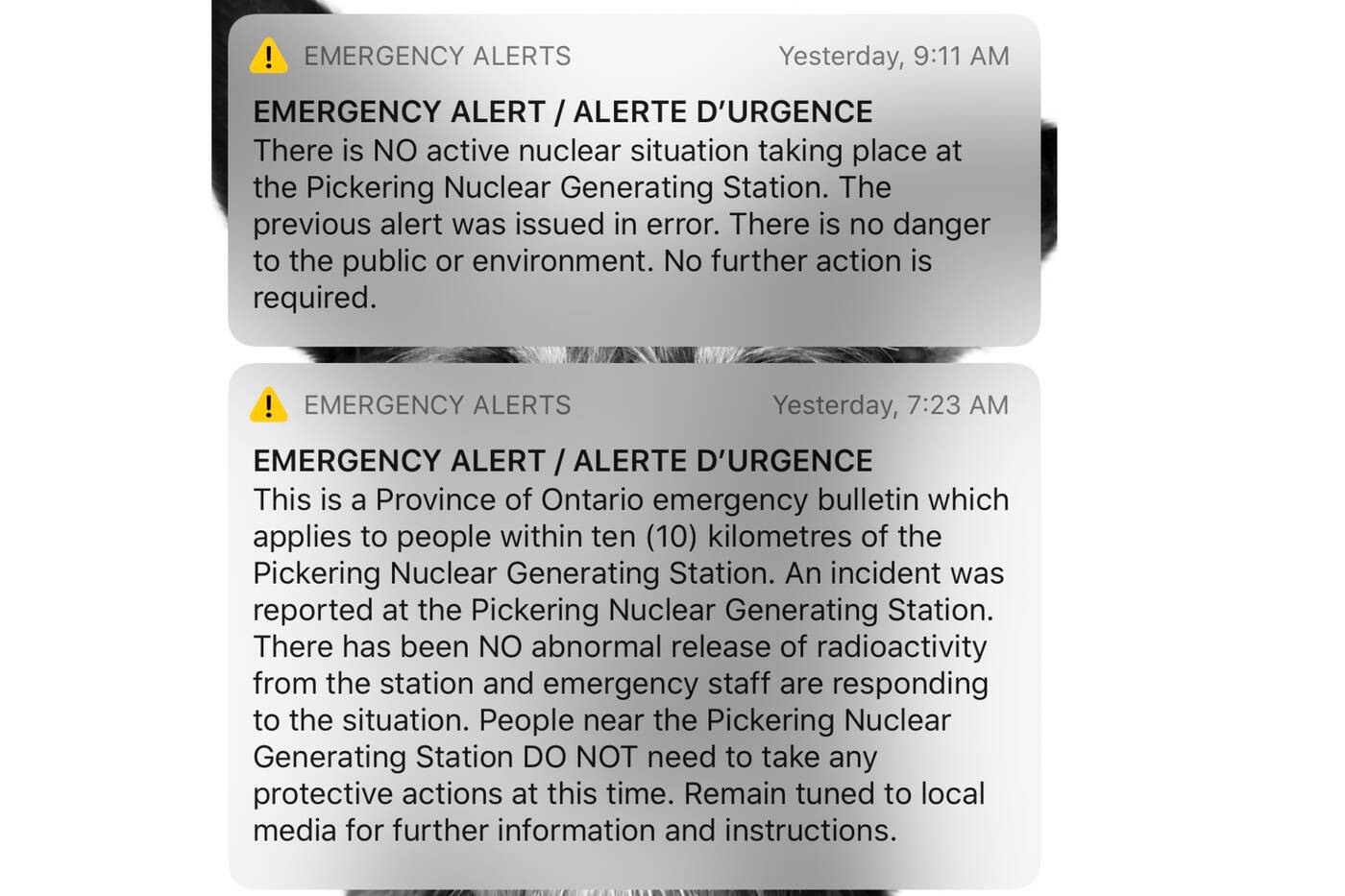 Two Emergency Alerts regarding a potential nuclear plant incident sparked panic and many questions in Ontario on Sunday morning. Image by blogTO.

Just before 7:30 a.m, on Sunday morning, phones across the province were lighting up with the alert, and it wasn't until over an hour later that the a new message was sent stating that the previous message was sent in error.

Like many of you, I was very troubled to have received that emergency alert this morning. While I am relieved that there was no actual emergency, I am upset that an error such as this occurred. I have spoken to the Province, and am demanding that a full investigation take place.

Ontario's Solicitor General, Sylvia Jones, said in a statement that the Sunday morning alert was sent by mistake during a "routine training exercise" being conducted by the Provincial Energy Operations Centre.

Many people in the province still have questions about the error, and remain sceptical that the alert was a test message, suggesting the error was greater than a test message being sent incorrectly.

I don't believe this was just a test that was sent out in error.

A test emerg alert looks like this one from Nov (on left). It starts with the words "This is a test."

This morning's alert is on right.
No mention of "test." 🤔

Some people pointed out that the message was missing key language and details that would signify that the alert was in fact a test.

Did you know if you click on Message Details it shows...this?
For both messages.
Maybe if you're sending out a test, don't include meta data stating the severity is extreme, the urgency is immediate, the response type is shelter, and the certainty is observed? #pickering pic.twitter.com/lAPiqE6z4A

The original alert said the incident applied to people within a ten kilometres radius of the Pickering Nuclear Generating Station, but specified that there was no abnormal release of radioactivity.

I can virtually guarantee you the folks at Pickering were as surprised as all of us when they received this text alert. The govt agency dealing with emergency messaging messed up. No one authorized the release of an erroneous message. Test or not agency didn’t learn from Hawaii.

Some pointed out that it seemed unusual for a training session to take place so early in the morning on a Sunday, though it is unclear if the alert was sent during an immediate taining exercise.

"OPG has a sophisticated and robust notification process in place that we would immediately follow in the unlikely event of an incident at the station. I want to assure the public that there was no incident at the station, and the plant is operating as designed,” said Sean Granville, Ontario Power Generation Chief Nuclear Officer in a statement.

The Ontario Government has said that a full investigation will be taking place into how the error occurred.