Westwood Square is the biggest South Asian mall in Canada

Westwood Square may not be a bustling mall like the Eaton Centre, or even be known citywide for a certain lacklustre charm, like Dufferin Mall, but it holds a few titles of its own.

This 425,000-square-foot shopping centre in Mississauga is actually the largest mall catering to the South Asian community in Canada, home to a plethora of condo shops owned by South Asians entrepreneurs offering saris, beauty services, and electronics. 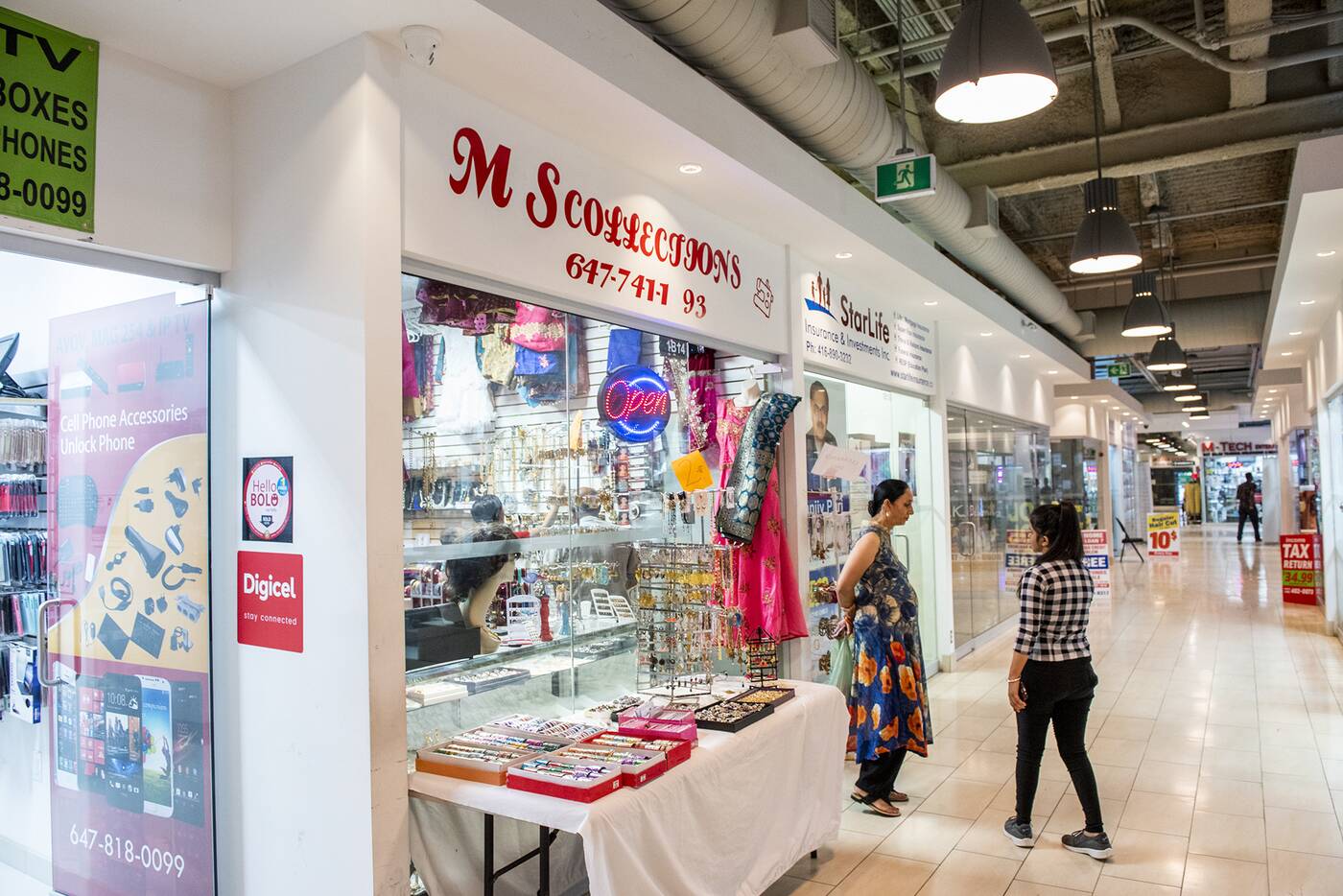 Westwood Square is the biggest mall in Canada catering to the South Asian community.

Enclosed by Highway 407 to the west, Highway 427 to the east, and the din of Pearson just south, the mall sits in the heart of Malton. It's one of few places in the area that's accessible to a fairly small population of around 40,000. 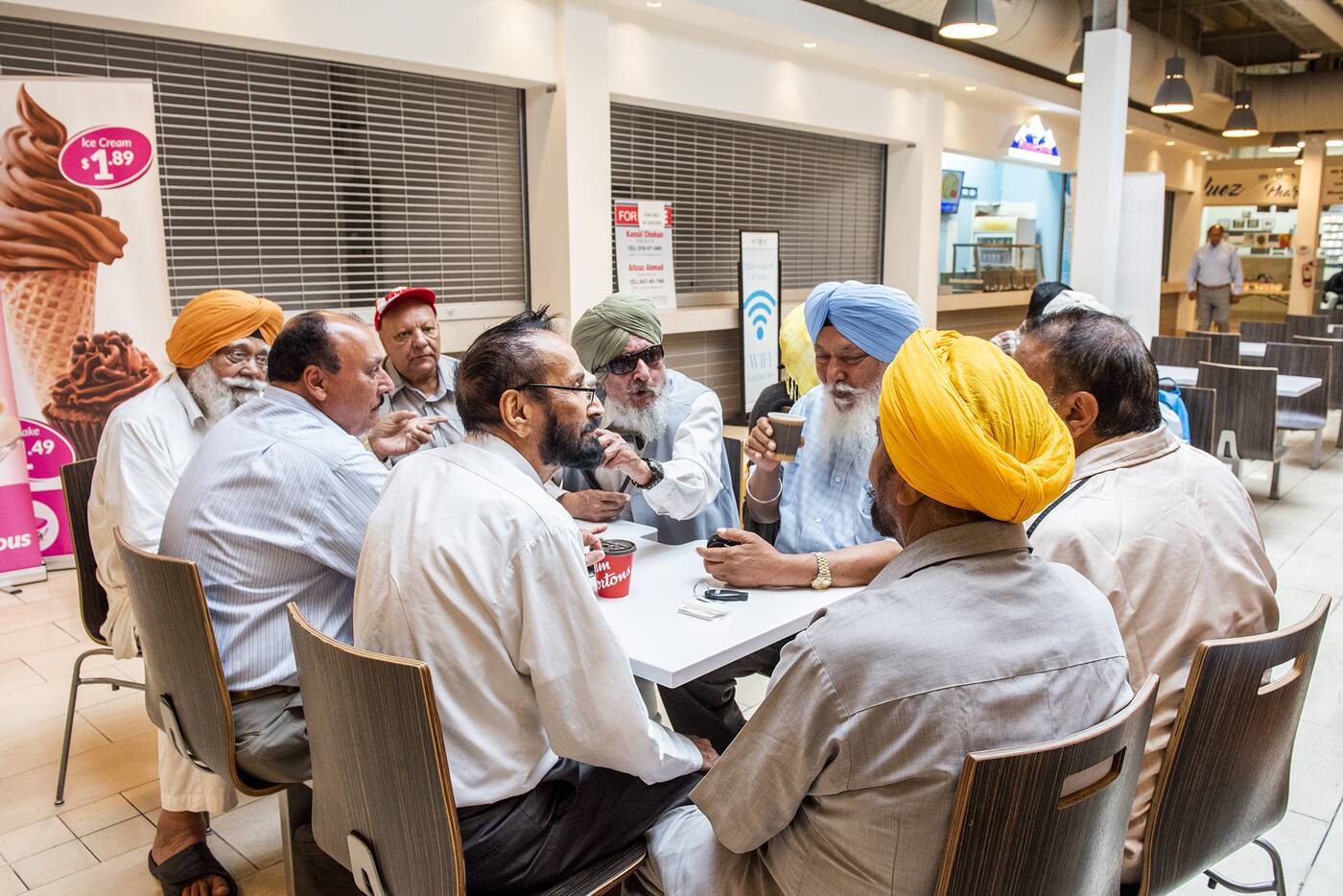 The upper food court is a popular place for members of the community to hang out.

Opened in 1968, it's also one of Mississauga's earliest indoor malls.

Starting off as a humble community hub for Malton locals, the shopping centre expanded over its first 20 years to host Canadian staples like Tim Hortons and Subway, which, by most measures, are indicators of a full-fledged mall. 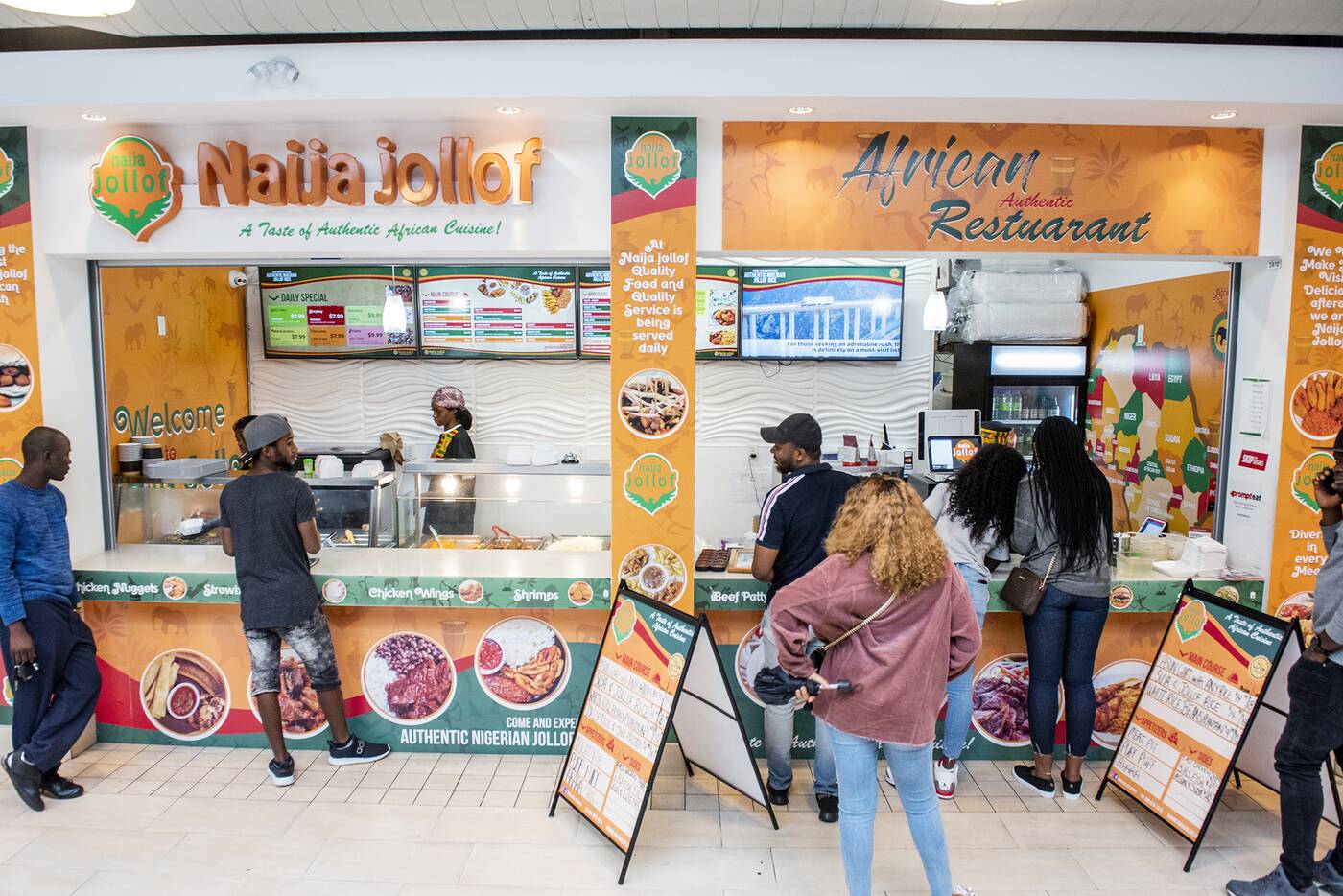 Naija Jollof is one of the newest businesses to enter the mall.

It was predominantly home to Italian businesses back then, according to the owner of Manny, the owner of Samir's Rugs, which has been selling carpets on the first floor of Westwood Square for 22 years. 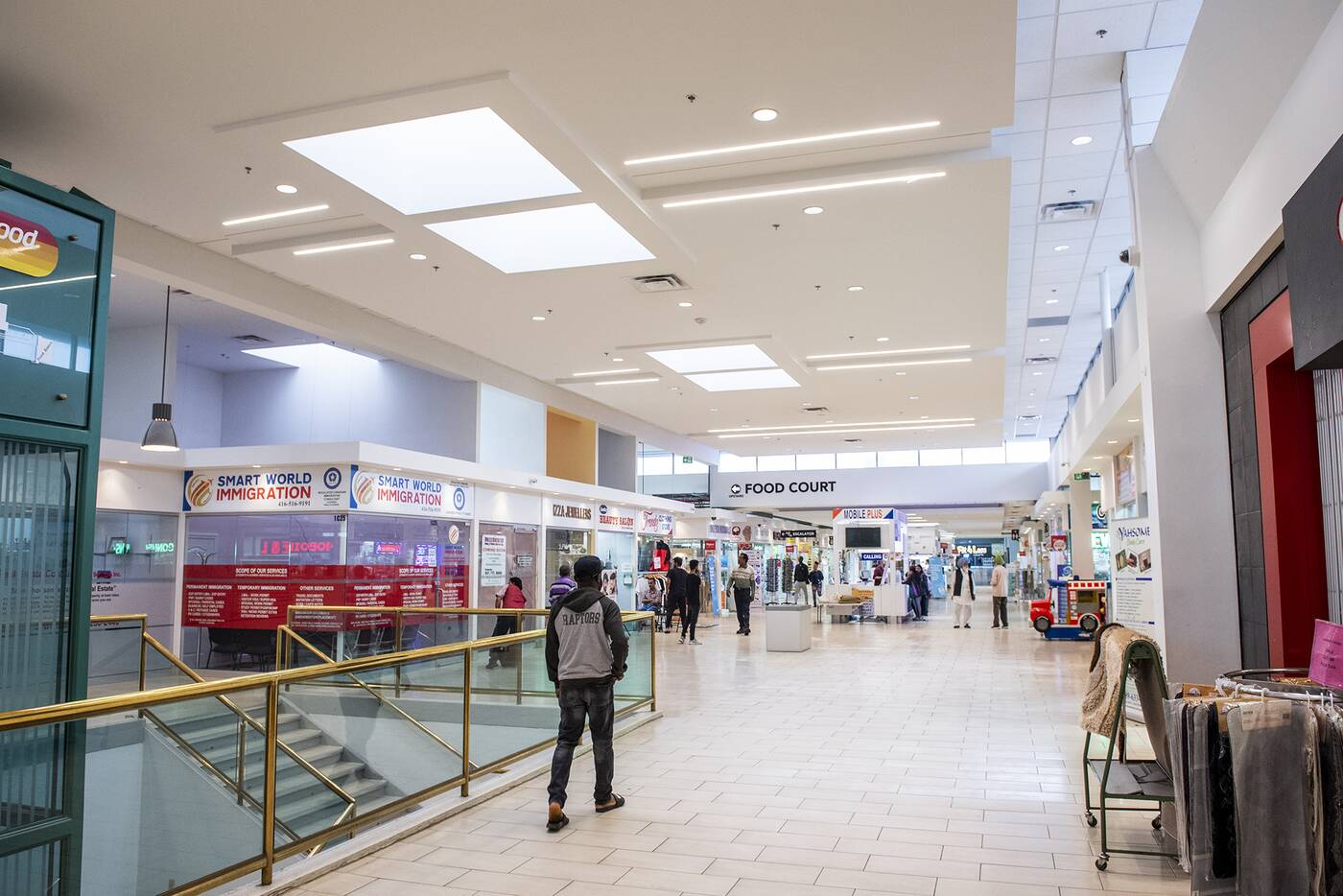 The mall has undergone major renovations over the last few years.

Today's Westwood Square looks nothing like it did in the 80s: major renovations that began in the early 2000s have seen the mall transform.

Scrapping the upstairs Zellers, it now has $60 million-worth of major brands like a Walmart, The Beer Store, Shoppers Drug Mart, a handful of bank branches, and a Chalo, FreshCo's South Asian-centric grocery outpost. 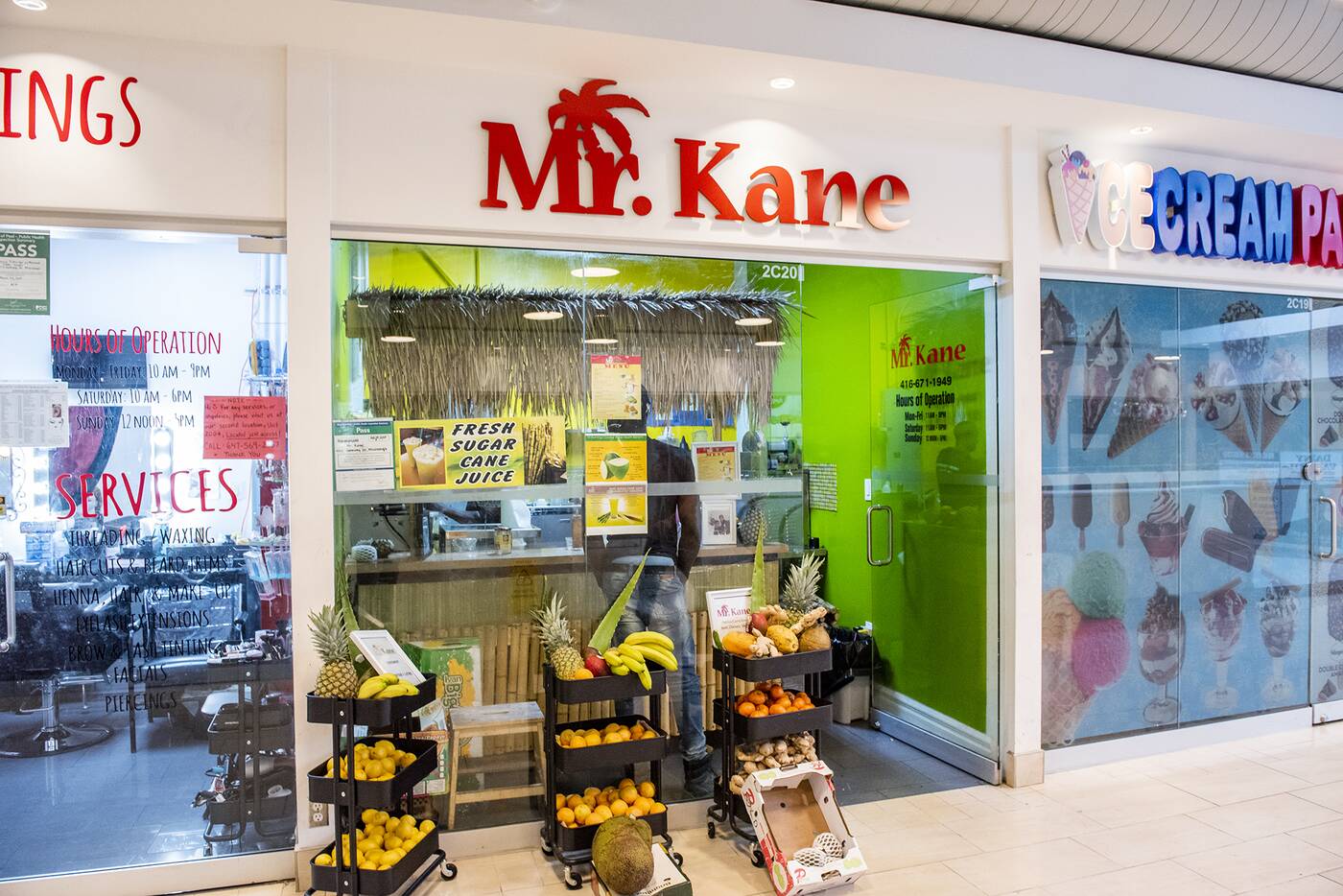 You can get a freshly squeezed sugar cane juice from Mr. Kane. 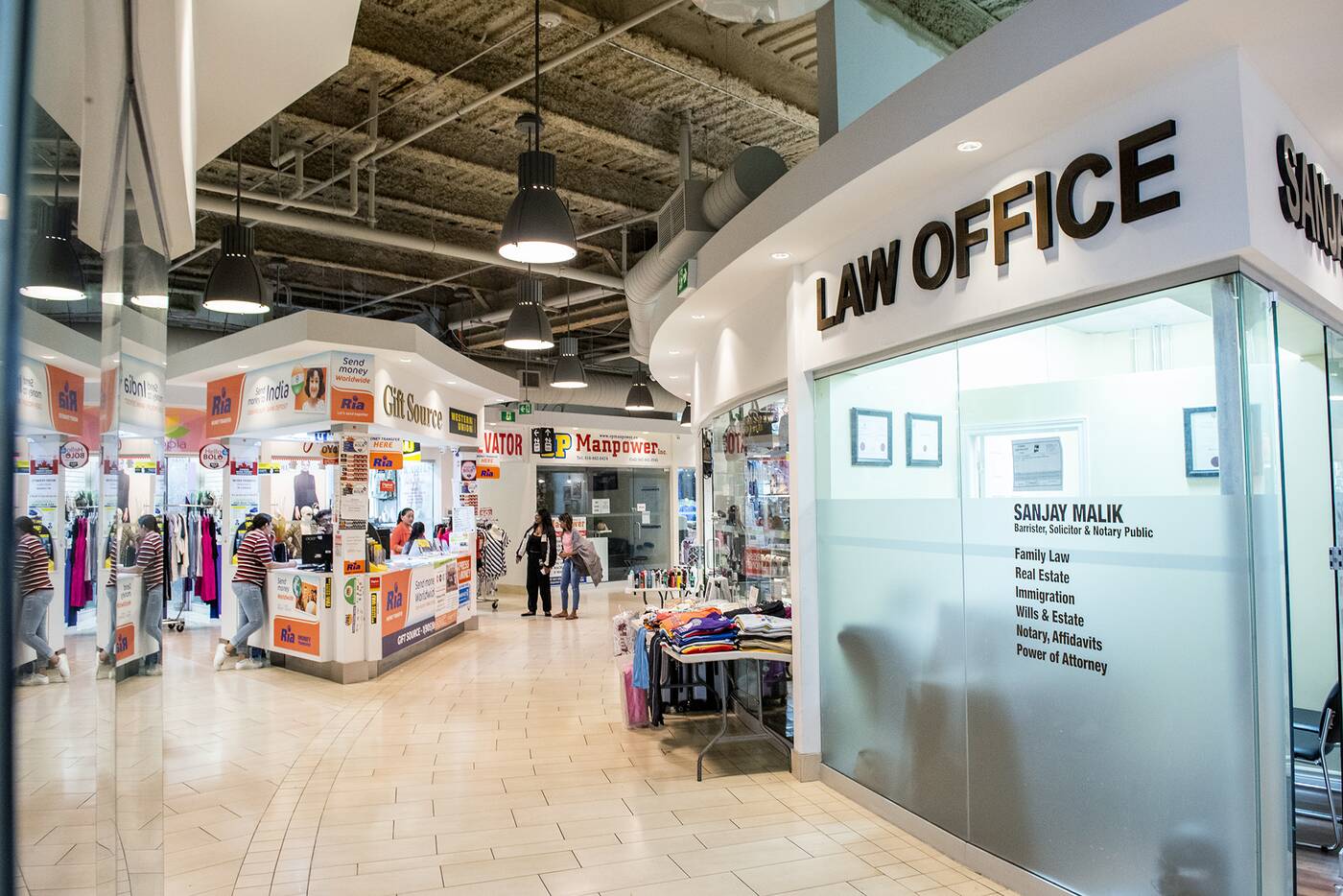 Walk through this two-floor centre now, and you can tell it's been renovated lately. Everything looks shiny and sleek, albeit a bit empty.

Just like Pacific Mall in Markham, Westwood Square is made up of small 100- to 500-square-foot stalls, owned by individual retailers, rather than leased. 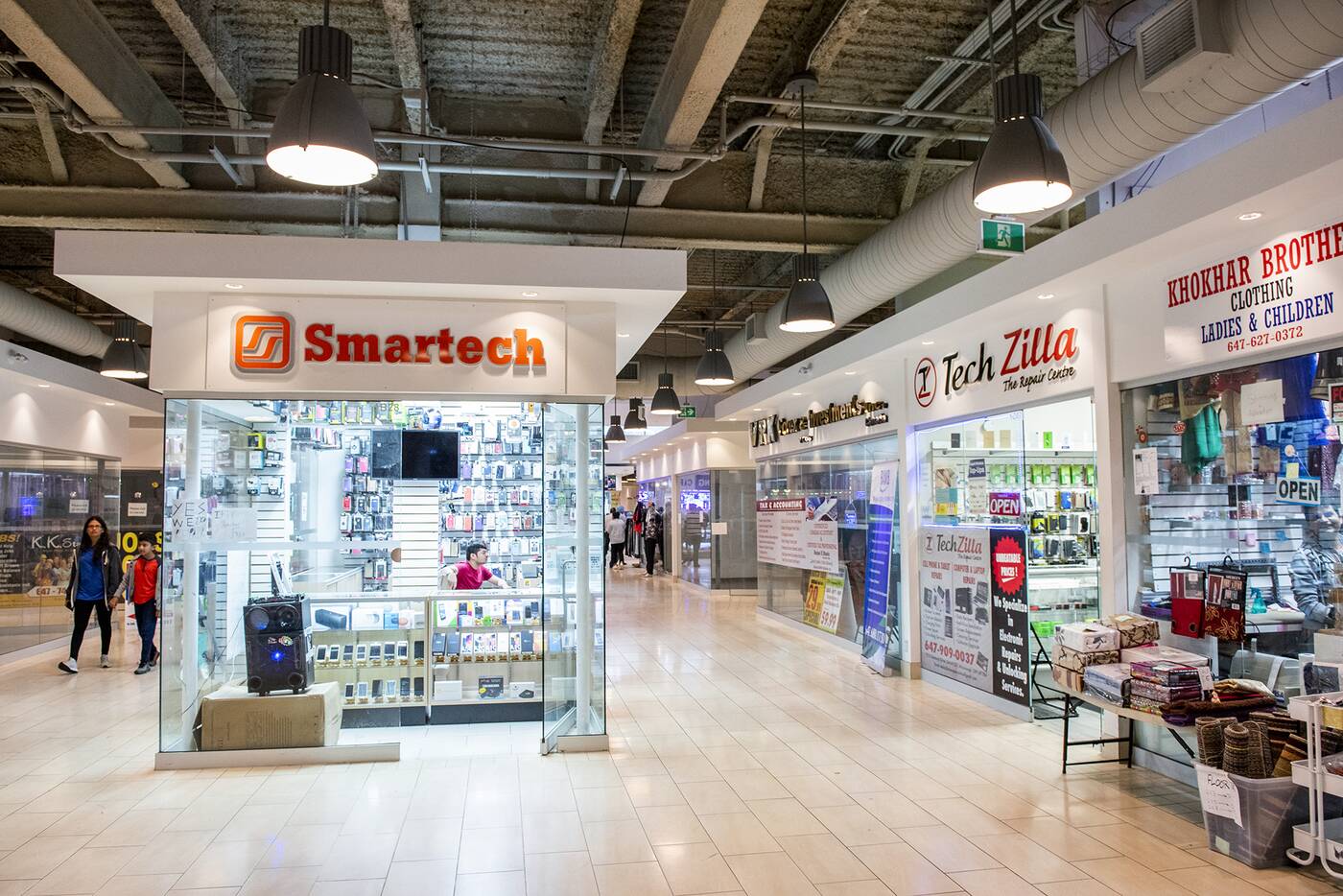 The main corridor of the mall is almost completely dedicated to tech stores.

The main corridor of the mall is almost entirely made up of shops selling phones, mobile plans, cases, and chargers. The western portion of the mall, where the Fit4Less sits, isn't particularly interesting, aside from its newness.

It doesn't take long to explore the entirety of the mall, but if you only have half an hour or so, I recommend heading upstairs to the main food court. 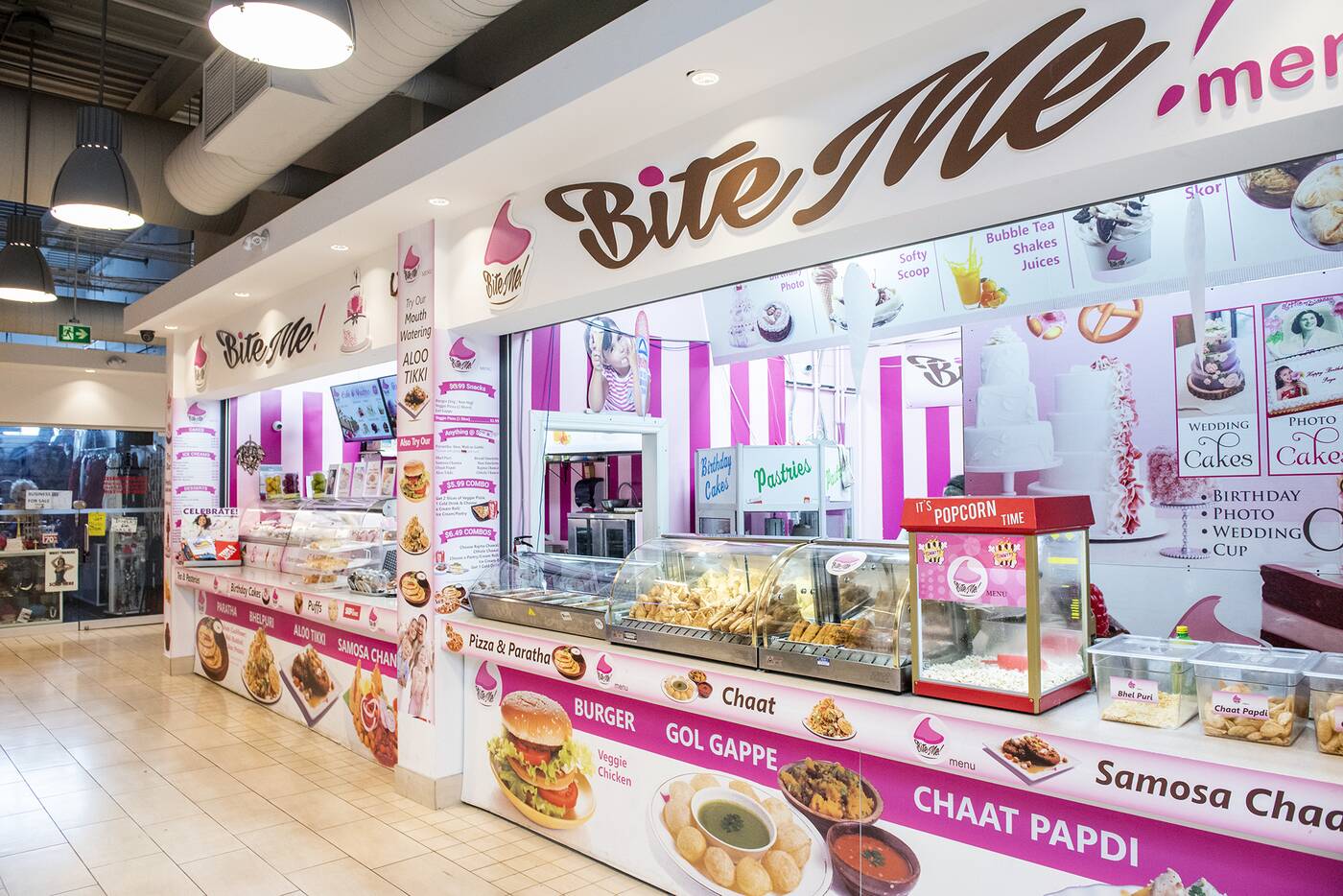 Bite Me! is a busy stall in the court serving South Asian baked goods and custom cakes.

There's Bite Me!, a colourful stall with a menu spanning crispy gol gappa and samosas to custom wedding cakes.

But drawing the lion's share of business here is Naija Jollof, Canada's first food court kiosk for Nigerian food. Cooking up hard-to-find dishes like authentic fufu and suya, you'll usually find people craving food from back home lining up at Naija, regardless of the time of day. 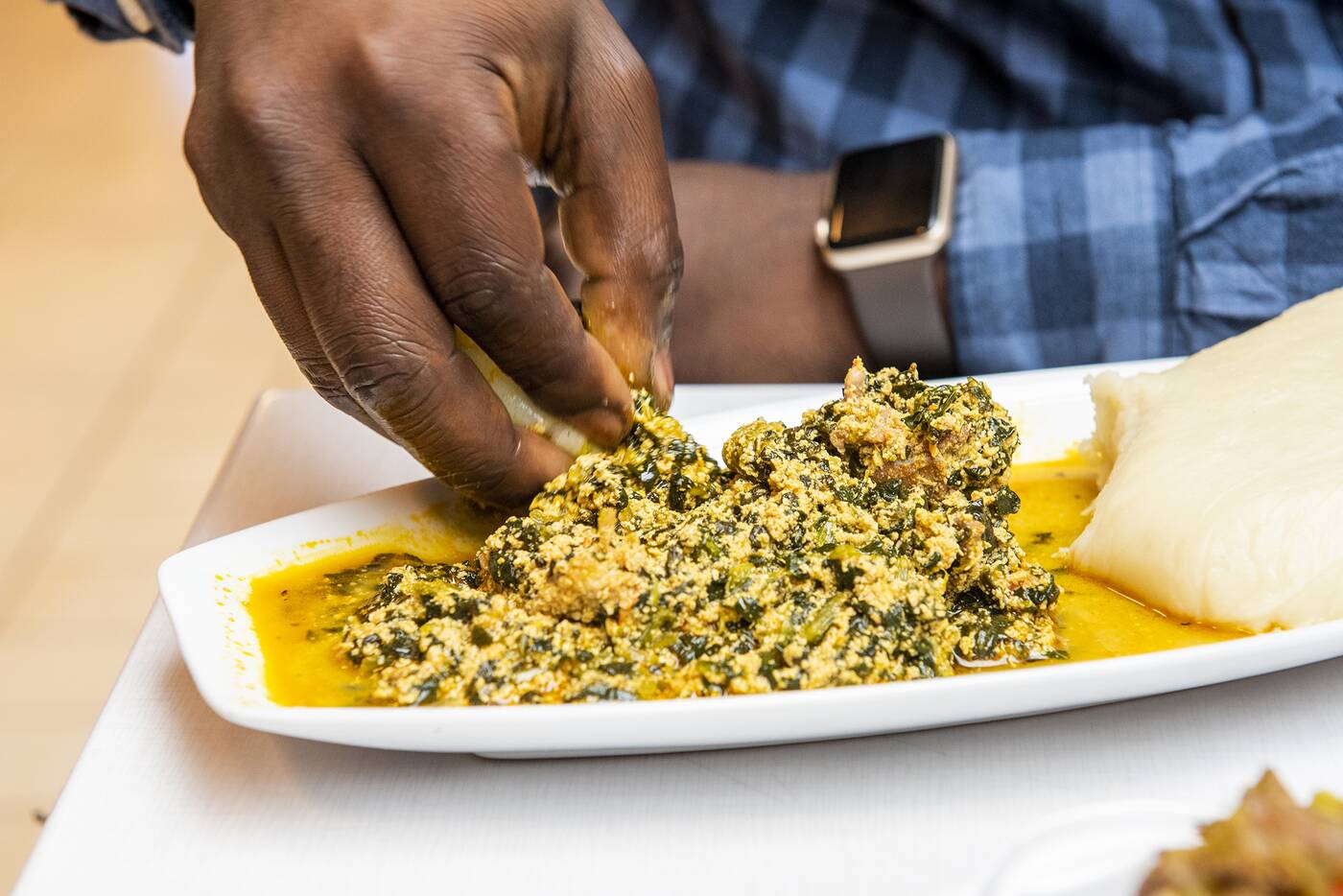 You can find authentic NIgerian eats at Naija Jollof, like fufu.

Beauty Derosa, Naija's owner, says she was turned down for a kiosk at other major malls like Square One, who weren't sure of how successful an African food stall would be.

It's ironic because, from what I can tell, Naija is the busiest shop in the mall, let alone the food court, and might be the biggest draw to Woodside Square Mall yet. 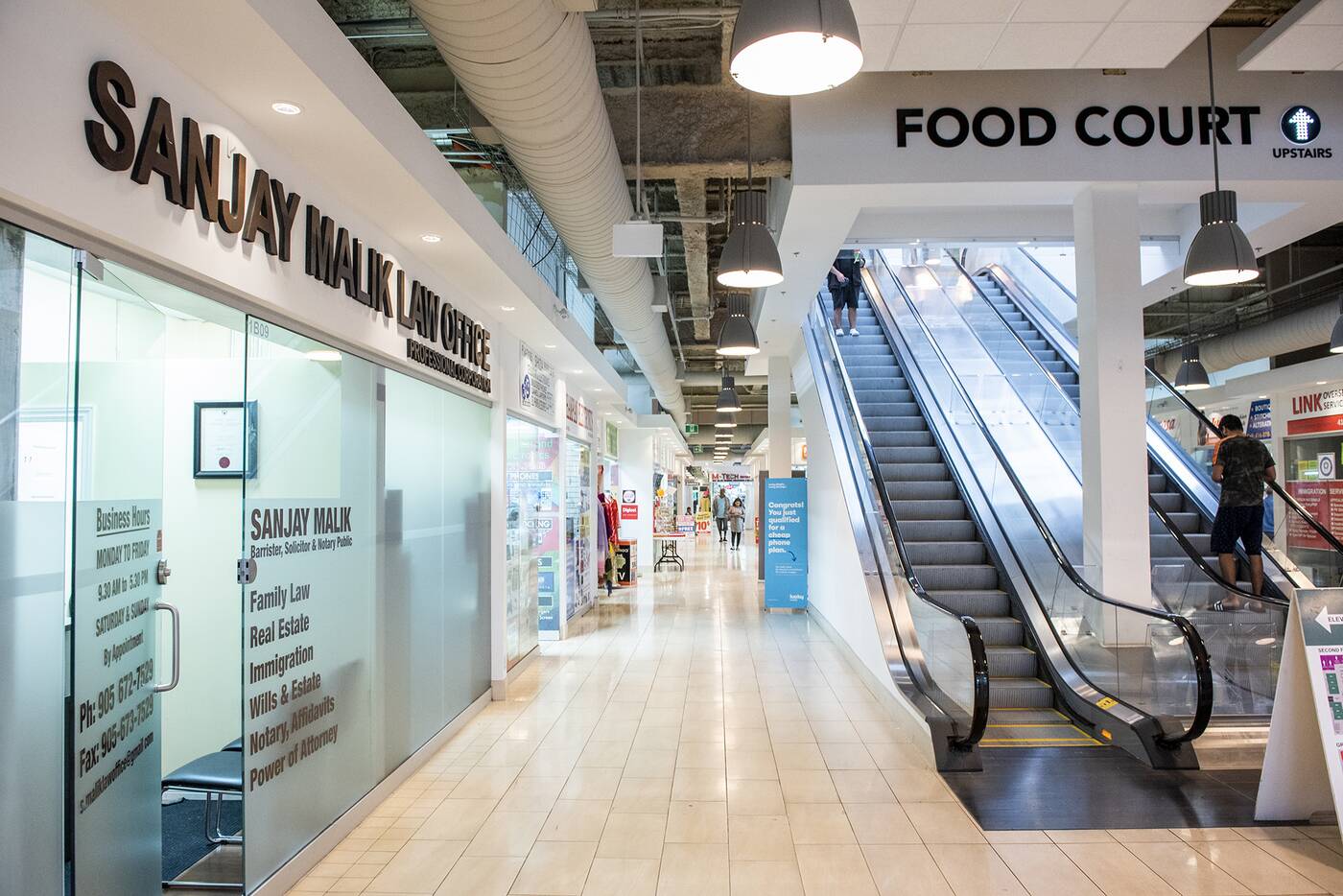