This neighbourhood in Toronto just gave itself a new name

Etobicoke is a sleepy neighbourhood no more. This burgeoning city-turned-borough in western Toronto is about to see a major overhaul, thanks to a new called project called EtobiCo.

It's sounds the exact same way as Etobicoke is normally pronounced — hopefully you know by now that the 'k' is silent — but the new coining represents a dramatic shift in the neighbourhood's culture from a predominantly residential and industrial area into a hub for commerce.

Spanning from Bloor down to The Queensway, and bound by Kipling in the West and Islington the East, this chunk of land by the Dundas-Kipling corridor will see the creation of a new community called The Assembly District as part of the larger EtobiCo. vision, whose motto is "Restoring the glory of Etobicoke."

Led by the Downing Street Group, the Assembly District will consist of five buildings, retrofitted to house a slew of modern work spaces and studios for lease or for purchase interspersed on Bering Street, Advance Road, and Norseman Street.

That includes two derelict pharmaceutical labs, an old 45,000-square-foot clothing manufacturer, and a former mechanic shop that's already been transformed into WorkCo: a green wall-filled coworking space that offers memberships for up to 96 members. 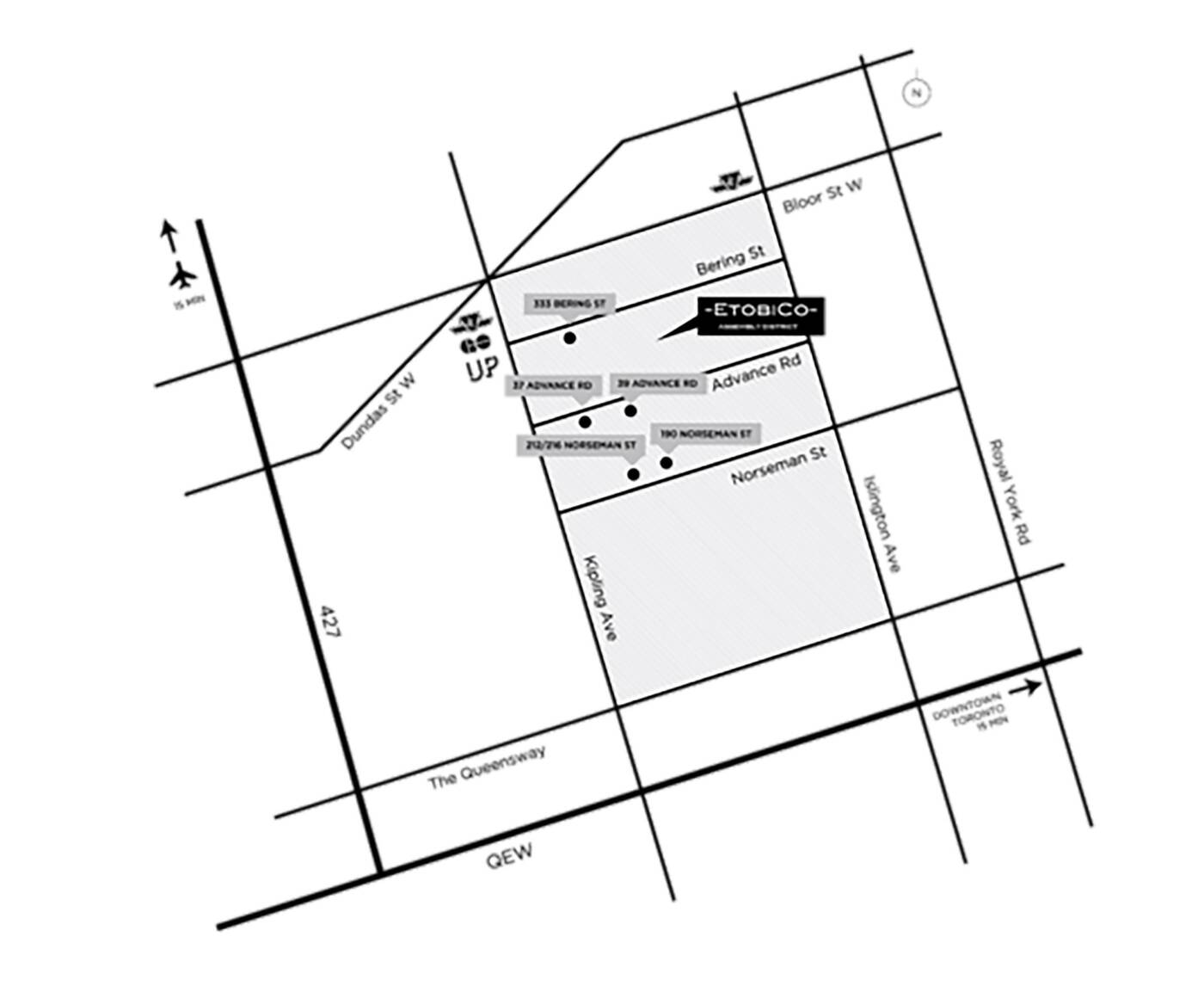 According to Downing Street Group president Daniel Odorico, the reinvention has been four years in the making, when they purchased the first of the five buildings currently under construction.

"We’re curating a community within Etobicoke, which we think is important, and tenants and occupants of buildings are looking for that kind of environment to operate."

Aside from WorkCo, potential tenants will be able to rent shared studio memberships through StudioCo., or flexible spaces through WorkshopCo. There will be workspaces for sale in WorkCondo, as well as in WorkshopCondo.

In hopes of meeting the needs of the explosive influx of condo communities in South Etobicoke, the Assembly District has also orchestrated the arrival of some core businesses that will drive the culture of EtobiCo. beyond the 9-to-5.

The popular King Street brewery Mascot is slated to soon open a beer garden, restaurant, and bottle shop at 37 Advance Road, where they've taken over a portion of WorkshopCo, which at this point is fully leased.

In the same building as WorkshopCo at 212-216 Norseman St. is Viryl Technologies, the makers of the world's first fully-automated modern record press, who moved here recently from their previous space on Goodrich Road.

Also joining the area will be a new outpost of the longtime Little Italy restaurant Il Gatto Nero. According to the EtobiCo. Instagram account, the district will also be launching a 'culture guide' that will feature different locations in the neighbourhood.

Odorico says all five buildings in the district should be fully complete in the next eight or nine months, and hopes to bring some street art to the area, but that the EtobiCo. takeover won't just stop there.