A 28-year-old woman named Talya Davidson was arrested and charged with four counts of assault in downtown Toronto on Monday after screaming racial slurs in Nathan Phillips Square and spitting on at least one person.

This much is fact, as verified by Toronto Police and multiple witnesses.

As for why the young woman did what she did, nobody can definitely say — but they'd all very much like to speculate.

A lone protester? Mmm Kay. Where exactly is she standing? Why isn't she in amongst the other pedestrians gaining exposure? Sorry, but way too many leftist hate crime hoaxes have made me really sceptical.

The ace detectives of Facebook, Reddit, Twitter and anywhere else one easily paste links to Google search results have been in a frenzy since video footage of the incident in question entered the local news cycle last night.

Many believe — and perhaps rightly so — that Davidson wasn't sincere in her actions, and that she isn't truly a supporter of federal Conservative Party leader Andrew Scheer. 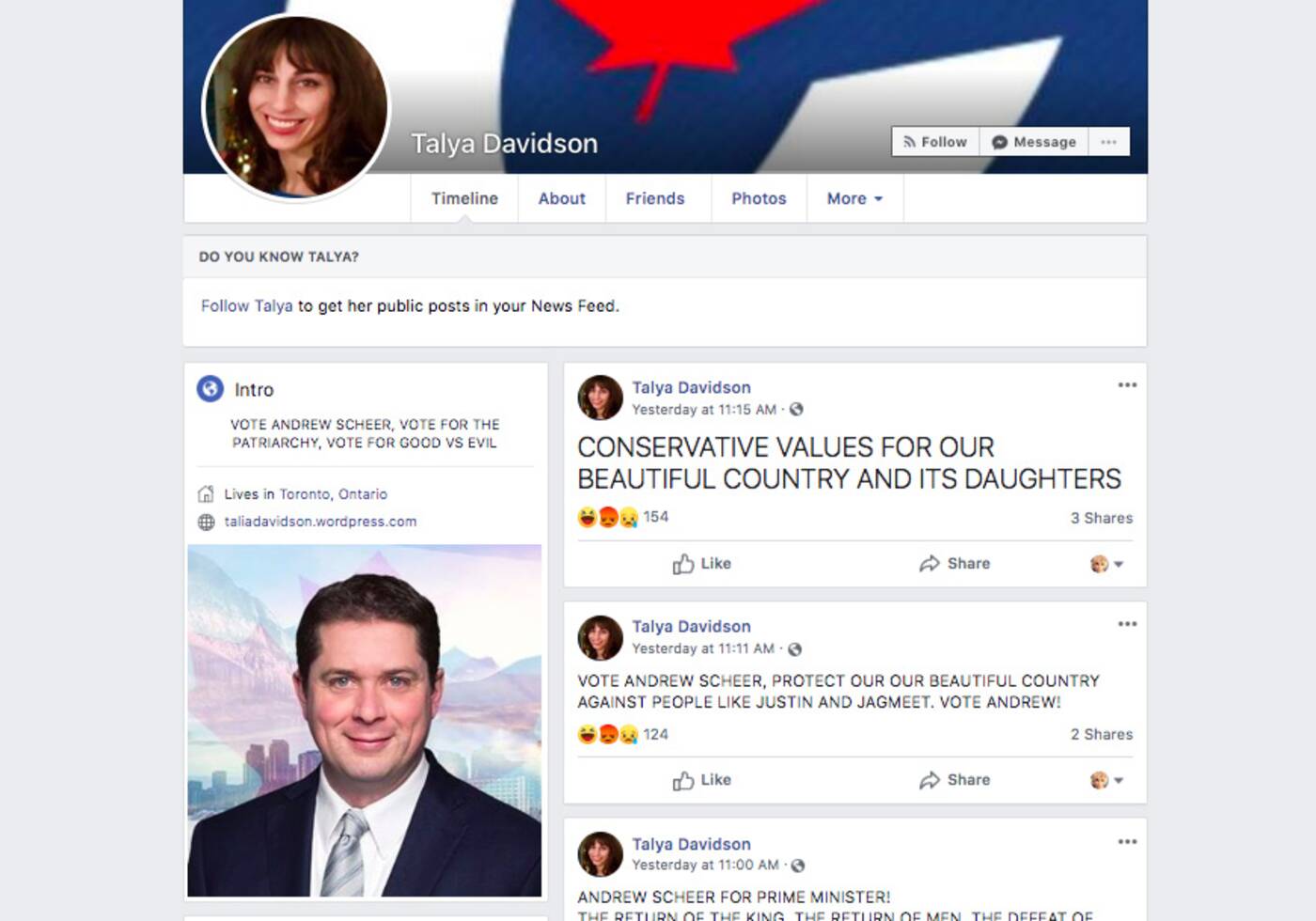 Upon reading her name in news outlets such as this one, people were quick to search for more information about Talya Davidson. One of the most obvious places to look was Facebook, where lo and behold, they found a profile featuring her name, her face and a series of posts supporting Scheer.

Aside from a handful of photos uploaded in 2015, the profile contains no content posted before August 11 of this year. All posts since then — the majority of them published yesterday morning — are either anti-Justin Trudeau, pro-Scheer, or so over-the-top racist that they almost read like a parody.

It's fishy, to say the least, and the entire profile reeks of a set-up. Whether or not it's coincidence or part of an elaborate stunt remains to be seen.

As of 2015, Davidson was reported by The Star to be a co-owner of the (now closed) Kensington Market Venezuelan restaurant El Arepazo. Her business partner and boyfriend at the time was said to have immigrated with his family to Canada from Venezuela in 2007.

Photos and video footage of the same woman who was arrested outside Toronto City Hall yesterday can be seen all over El Arepazo's still-live Facebook page.

"Here's the racist attacker from today's staged attack in Toronto," tweeted one woman with a screenshot of the profile.

"She co-owned a Latino restaurant with her Venezuelan boyfriend that shares Adam Vaughan posts boasting how proud they are to be a part of Kensington Villages' diverse history, and comments online about Islamophobes."

Another screenshot shared by the same person shows a sympathetic comment from someone with the handle Talya Davidson on a 2016 article about attacks on Muslim women.

The woman's face and name can also be seen in very normal, non-extremist profiles on Plenty of Fish and YouTube.

A comment from someone with the same last name

According to this her brother claims she is definitely a liberal. pic.twitter.com/IFhDPmqYes

Someone who shares the last name "Davidson" wrote in the comments of a Facebook post that the woman is his sister and that she's "she is a liberal trying to make conservatives look bad."

A surprising number of people on Twitter have taken this to be fact.

I don’t know who this woman is, but there is no place in our party or our country for her hateful language. I condemn her behaviour and racist comments. https://t.co/khSV7hAWO4

There is no evidence to suggest that Davidson is officially affiliated with any political party in Canada.

And yet, with a federal election on the horizon, some speculate that her actions on Monday afternoon were part of a ploy to influence voters.

Scheer condemned the incident on Twitter, stating that there is no room in the Conservative Party or within Canada for such behaviour or language.

His supporters, however, are going so far as to suggest that Canada's Liberal Party staged the incident as a way to slander the candidate and make him look like an extremist.

"It is just so easy for the corrupt Liberal parasites to reel in their complicit media toadies into pushing an obvious false flag op," wrote one person on Twitter. "She is a Union stooge or a Liberal operative guaranteed."

An investigation into the incident is ongoing, according to police.

Regardless of what her motivations were, the woman in question did spit on someone, repeatedly yell the N-word, and is alleged to have assaulted three peace officers.

Many Torontonians can agree that, hoax or no hoax, it's never okay to assault people or utter racial slurs. Not for any reason.