Toronto's most notorious chain of unlicensed cannabis dispensaries just took another hit in the form of cops hauling out what appears to be an entire inventory's worth of weed and edibles.

City of Toronto bylaw officers, in conjunction with Toronto Police, raided the CAFE dispensary on Harbord Street near Spadina earlier this morning.

Several large bags filled with cannabis products and an undisclosed amount of cash were removed from the store, but police have yet to reveal if any charges were laid.

Some of the many bags police removed from Cafe on Harbord Street. pic.twitter.com/JiYXSxHE8x

Witnesses say that the store's occupants were visibly upset and that a man who claimed to be living inside the location was present during the raid.

The alleged resident was accompanied by a lawyer who had previously represented the chain under these same circumstances — successfully.

CAFE has used what experts call a "legal loophole" in the Cannabis Control Act to prevent the city from closing at least two of its locations since April.

The act states that officers can only shut down a facility if someone is charged with a cannabis offence related to said facility — so long as it is not a residence.

After two consecutive raids at its Bloor Street location this spring, CAFE claimed that someone was living in the basement, forcing bylaw officers to unseal the doors and windows they'd welded shut.

The chain trotted out a bunk bed in the back room of its Fort York location a short time later as evidence that someone lives there, too.

Now the concrete blocks have arrived. We’ve seen an unlicensed cannabis shop shut down before, with blocks covering the front entrance pic.twitter.com/qnX0YNnb7Z

It would appear as though bylaw enforcement officers came equipped to issue a closure notice 104 Harbord Street today, and to physically bar entry to the space as they've done in the past.

A truck was spotted near the scene this morning carrying large concrete blocks similar to those erected outside an unlicensed cannabis dispensary near Yonge and Bloor last month.

CBC's Lorenda Reddekopp reported that the barriers weren't used, however, after the head of city bylaw enforcement told her they "weren't able logistically to put the concrete blocks in front of the store." 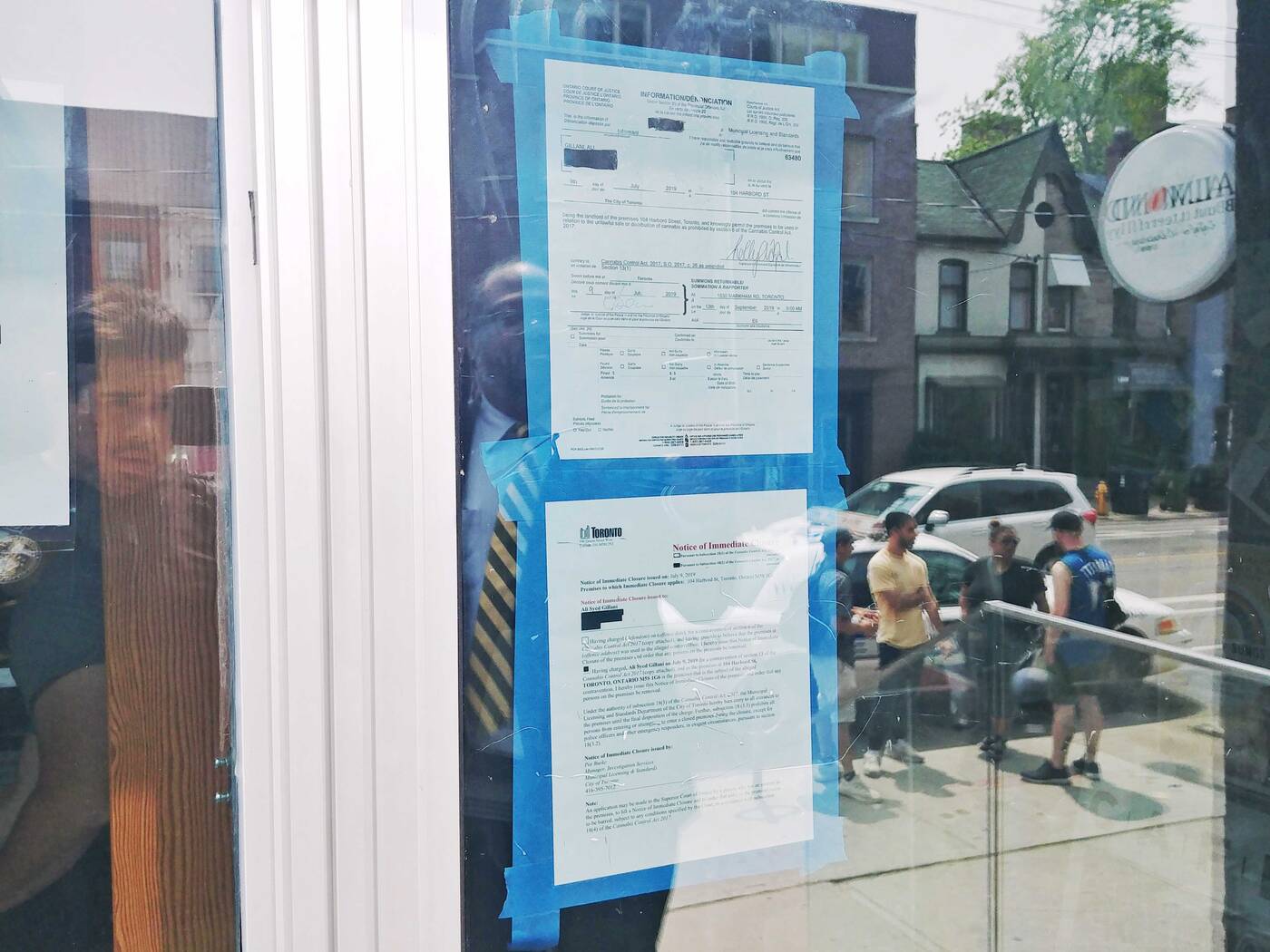 One of Toronto's busiest CAFE dispensaries was shut down by the city on Tuesday morning. Photo by Hector Vasquez.

A closure notice has been ordered for the location effective July 9, according to a City of Toronto notice posted to the store's front door.

Another document signed by an Ontario judge shows that the building's landlord stands accused of knowingly permitting the illegal sale of cannabis on his property.

The landlord has been summoned to appear in court this September in relation to the offence.