Over the winter, one Toronto neighbourhood got an influx of new residents — all of them sequestered to a giant tent in the middle of a parking lot.

The St. Felix Centre, as the space is called, is one of three temporary respite structures erected by the City of Toronto recently to house hundreds of people who can't find space in the already overwhelmed public shelter system.

About 100 Torontonians experiencing homelessness are currently said to live at the large, white dome on Fraser Street in Liberty Village, where they can access community meal programs, housing support, a food pantry, visiting nurses, harm reduction services and a clothing bank, among other things.

It's an unusual addition to a young, dense neighbour hood packed with tech startups and condos but, by and large, residents seem supportive of how St. Felix Centre is using Lamport Stadium's back parking lot. 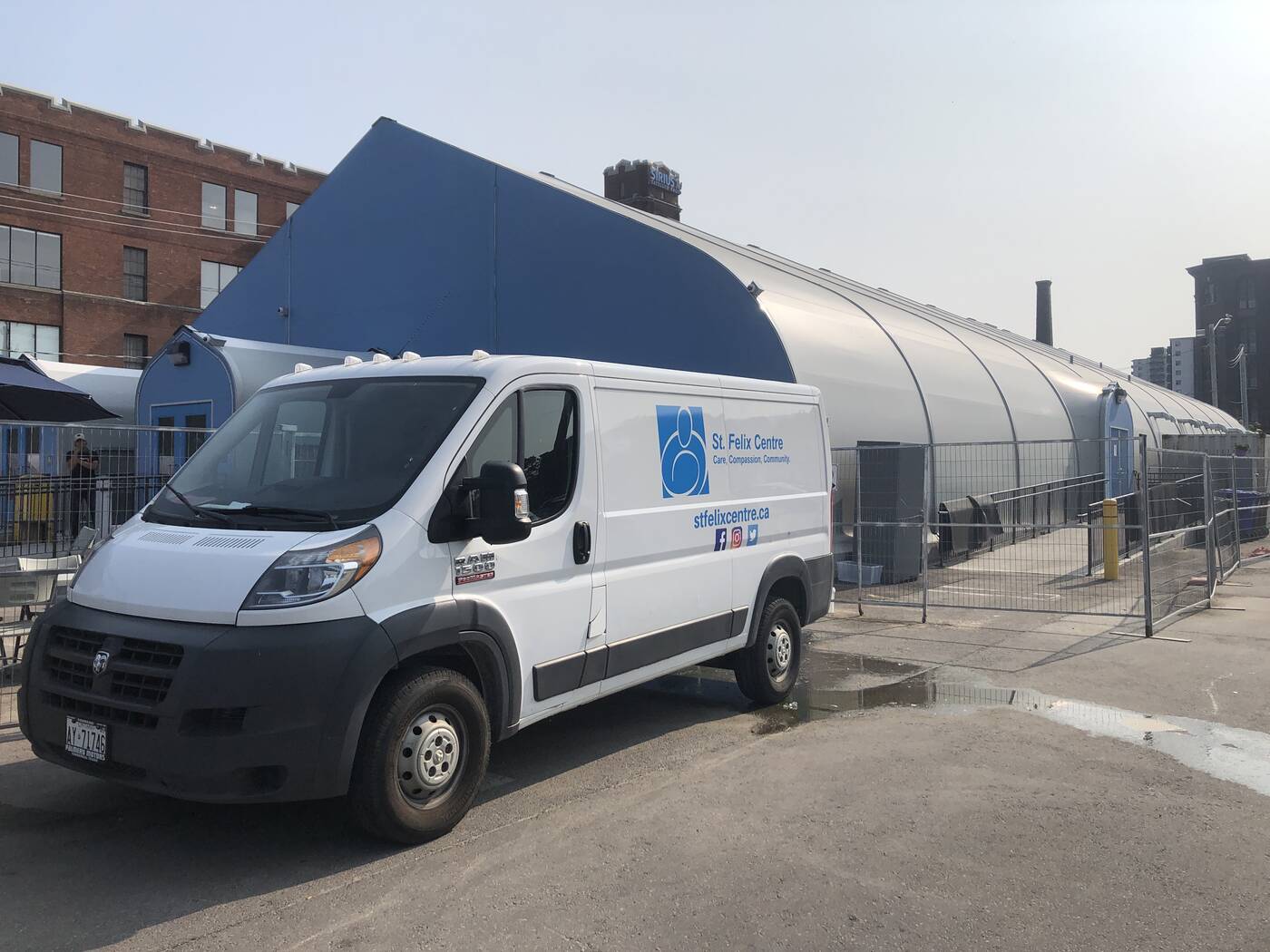 The city of Toronto paid $2.5 million for this large canvas dome in the east end of Toronto's Liberty Village. It will serve as a temporary shelter for people experiencing homeless for the forseeable future. Photo by Lauren O'Neil.

And yet, some can't help but notice a correlation between the 24-hour respite centre's arrival and a recent uptick in local crime. Not to mention needles on the streets.

Toronto Police confirmed to CBC last week that they have "received an increased number of calls for service" in the area and that they've added some district special constables to their current patrol teams.

Management at the centre has also stepped up by assigning staff members to pick up needles, check in with local businesses, and be present outside the shelter to make people going to and from their cars feel safer.

It's not enough for some, however, based on complaints posted to the 11,500+ member-strong Liberty Village Residents Association Facebook group.

"I know a lot of us share the concern of the increased break ins we have seen in our condo buildings since the addition of the respite center," wrote one local near the end of May.

"I am happy we are able to open our neighborhood to those in need; however, [I] do not think we should incur additional personal expenses as a result (increased condo fees for repairs, locks, extra security personnel, replacing personal property etc)." 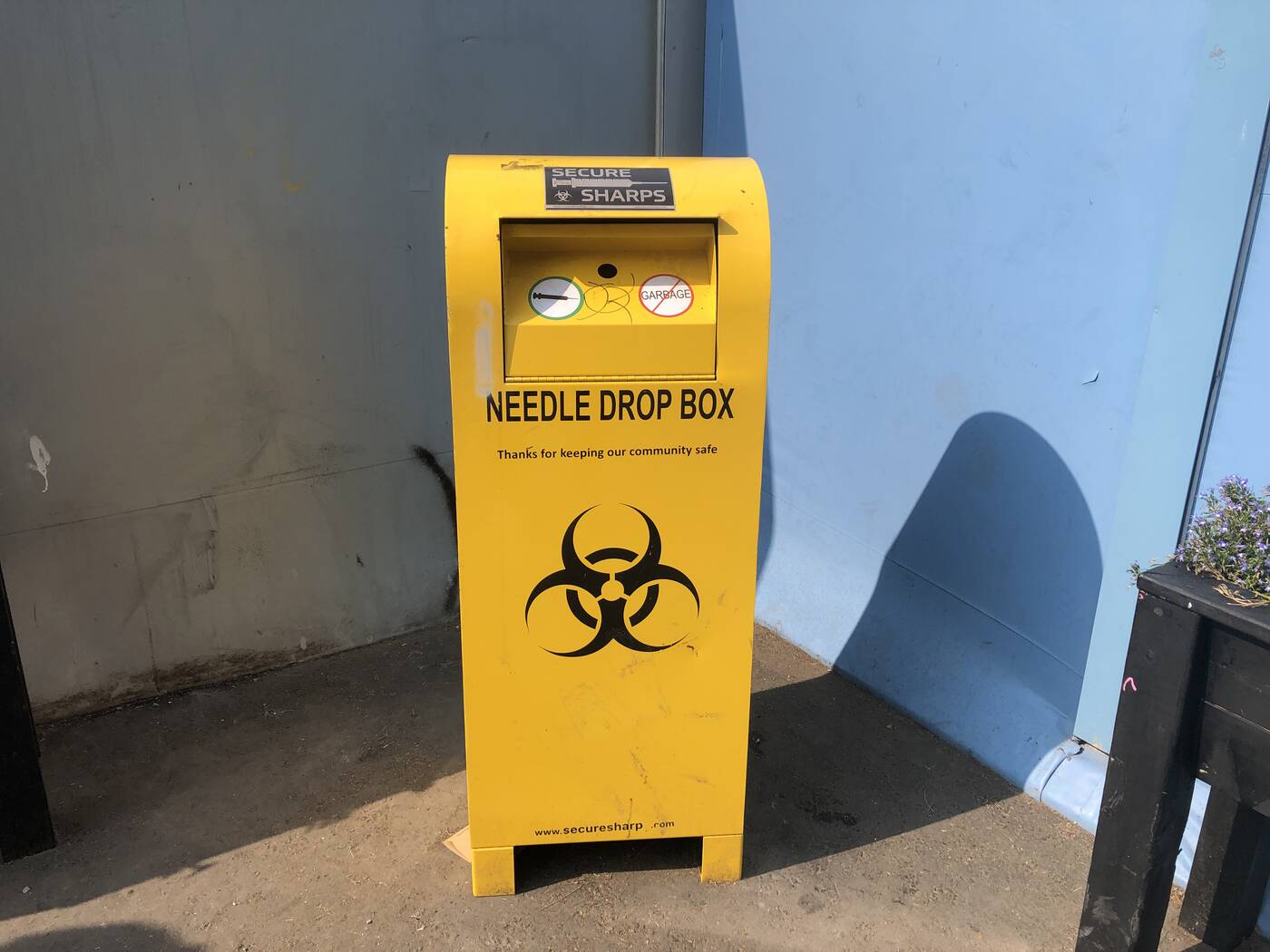 "Not trying to start a fight about the respite center, so let's get that out of the way," wrote another member of the Facebook group in June.

"Who do you contact about drugs and paraphernalia found on the streets or public places?" they continued. "I have on several occasions found sharps etc on the streets in LV. This morning I found a bunch of pills scattered around the sidewalk. This is not the first time it's happened."

Backlash to comments like these from those who support the shelter's existence have been, as you can likely imagine, swift and harsh: accusations of NIMBYism are rampant in the comments section of the LVRA's Facebook page.

The drama has only been intensifying since last Thursday, when a nail salon not far from the shelter was broken into and stolen from for the third time this spring.

Previous to March of 2019, the salon and spa on Jefferson had been operating without incident for almost nine years.

It was a tipping point of sorts for neighbourhood residents who see the shelter as a threat to their safety and well-being. 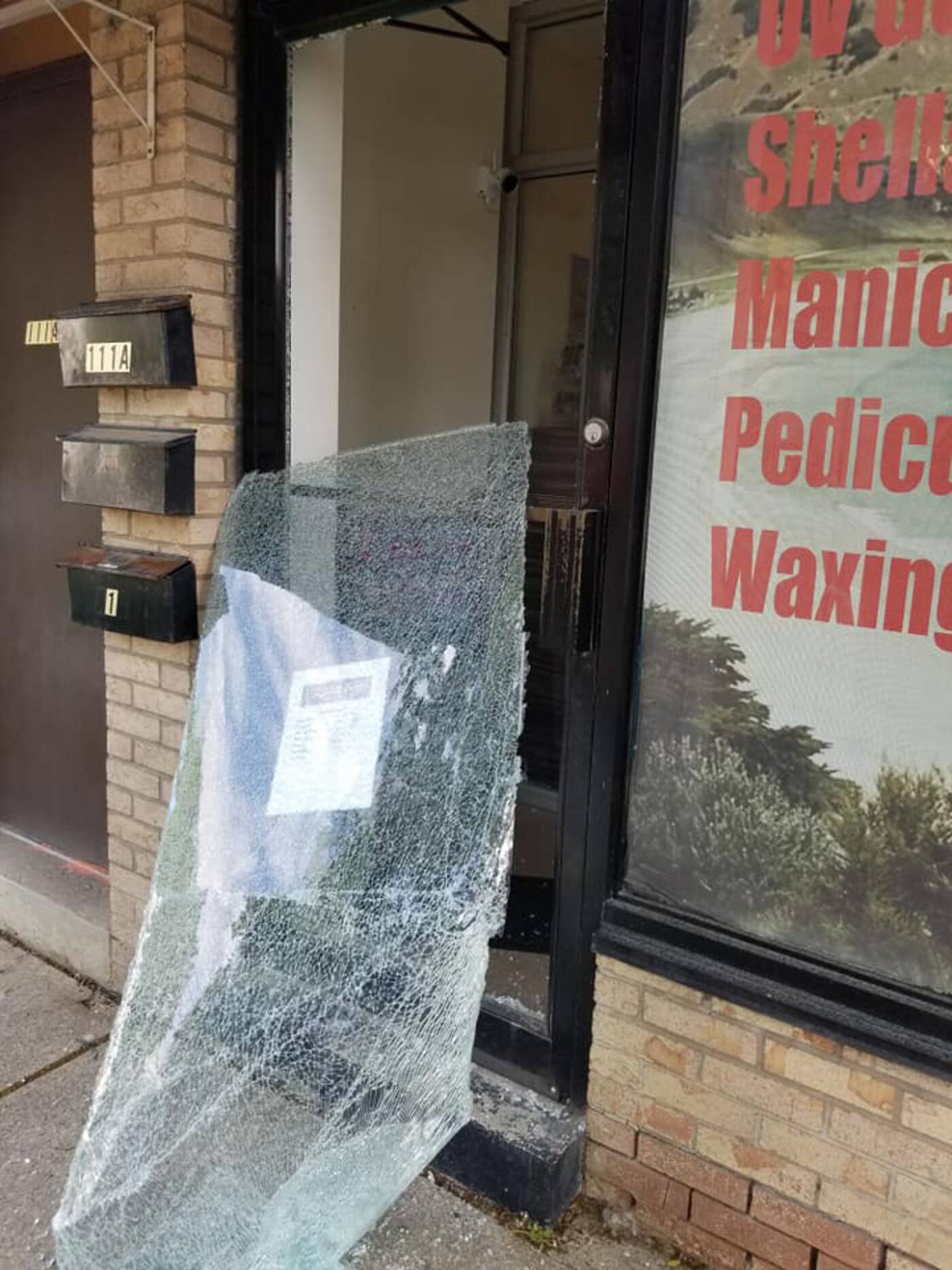 A resident posted this image of a broken storefront on Jefferson Avenue July 4, noting that X-Nail and Spa had been broken into three times since the respite centre opened "just metres away from them." Image via Joanne Roberts/Liberty Village Residents Association Facebook Page.

On Tuesday morning, one member of the group shared information about an upcoming meeting with Deputy Chief of Police, Peter Yuen, that would serve as "a community consultation about the Neighborhood Officer Program."

"To everyone that lives here in Liberty Village and wants to do something about the increase in thefts, vandalism, drug paraphernalia, etc. that has come along with the new respite centers we have surrounding us, this is your chance," wrote the resident.

"The more of us that attend, the better the chance we have at actually getting something done." 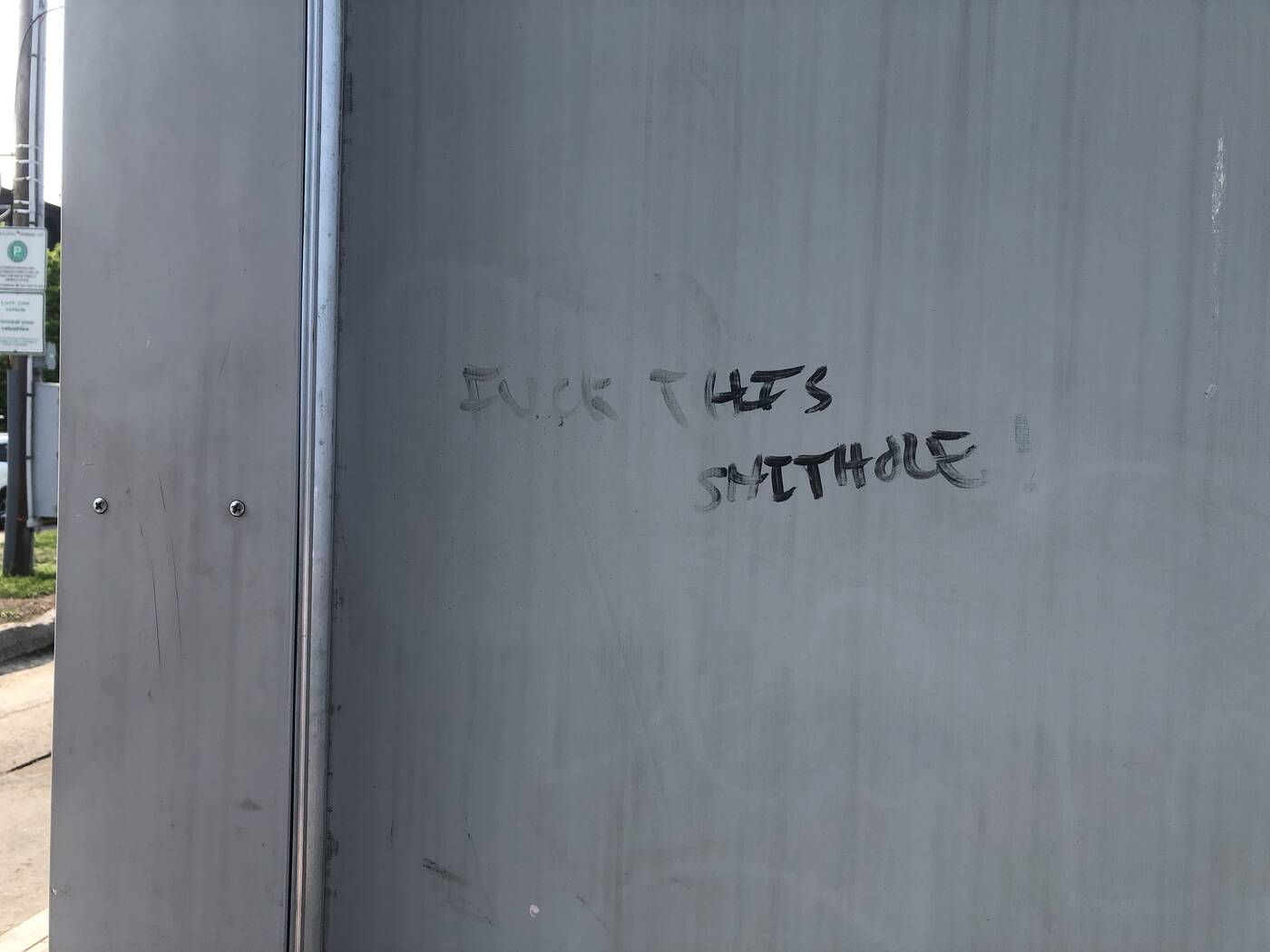 Various bits of graffiti can be seen on and around the respite centre. Photo by Lauren O'Neil.

Several members of the Liberty Village Residents Association Board also addressed the issue on Tuesday, noting in a post that they would be meeting with councillor Joe Cressy on Wednesday.

"We just finished the meeting with Cressy and in the interest of timely feedback, want to provide a brief update," wrote moderator Gabriela Gonzalez in the comments section of that post this afternoon.

"Cressy is aware of the problem and the significant increase in incidents," she wrote. "He has already sent a request to 14th Division for additional patrols."

In addition to increased patrols, the LVRA has asked Cressy for more community safety workers to "provide a more holistic approach to helping Centre’s clients" as well as better lighting in the eastern half of Liberty Village.

Whatever happens, it won't be forever.

As Gonzalez herself notes, the Liberty Village respite centre (and two others downtown) have only been implemented as temporary measures while the city works to build 1,000 new actual shelter beds.

Those new shelter spaces should come available sometime in 2020. Meanwhile, some 181,000 people remain waitlisted for permanent affordable housing within the City of Toronto.