UPDATE: Event organizers posted the following statement to their website after the publication of this article:

"Over the past few weeks we've been experiencing quite a bit of difficulty  with construction delays. We've been busy contacting customers advising of the delays, but we have not been able to reach everyone. Our deepest apologies.  We've now been accused of hosting a scam event and have received quite a few requests for refunds. Due to the high requests, we will be postponing this event until the fall. We will be contacting everyone over the next few days to issue refunds. All refunds will be processed through your credit cards! Our apologies for the not contacting everyone sooner. Please contact us at info@prohibitionpartytoronto.ca for refunds."

It was advertised as a 1920's Gatsby party in a vacant Toronto warehouse. Picture a dark nightclub with a live jazz band, aerialists on tightropes, stilt walkers and liquor.

But many ticket purchasers will never experience the event.

Kenya Stewart and her partner bought tickets to Prohibition Party at the Hearn Generating Station on April 6. The party is scheduled for July 13. The tickets cost $55 each.

Stewart received a confirmation email for the event, but no ticket. She reached out to the event coordinator, Bethany Stephens, who said that the tickets would be sent out in May and she would confirm Stewart’s address soon. 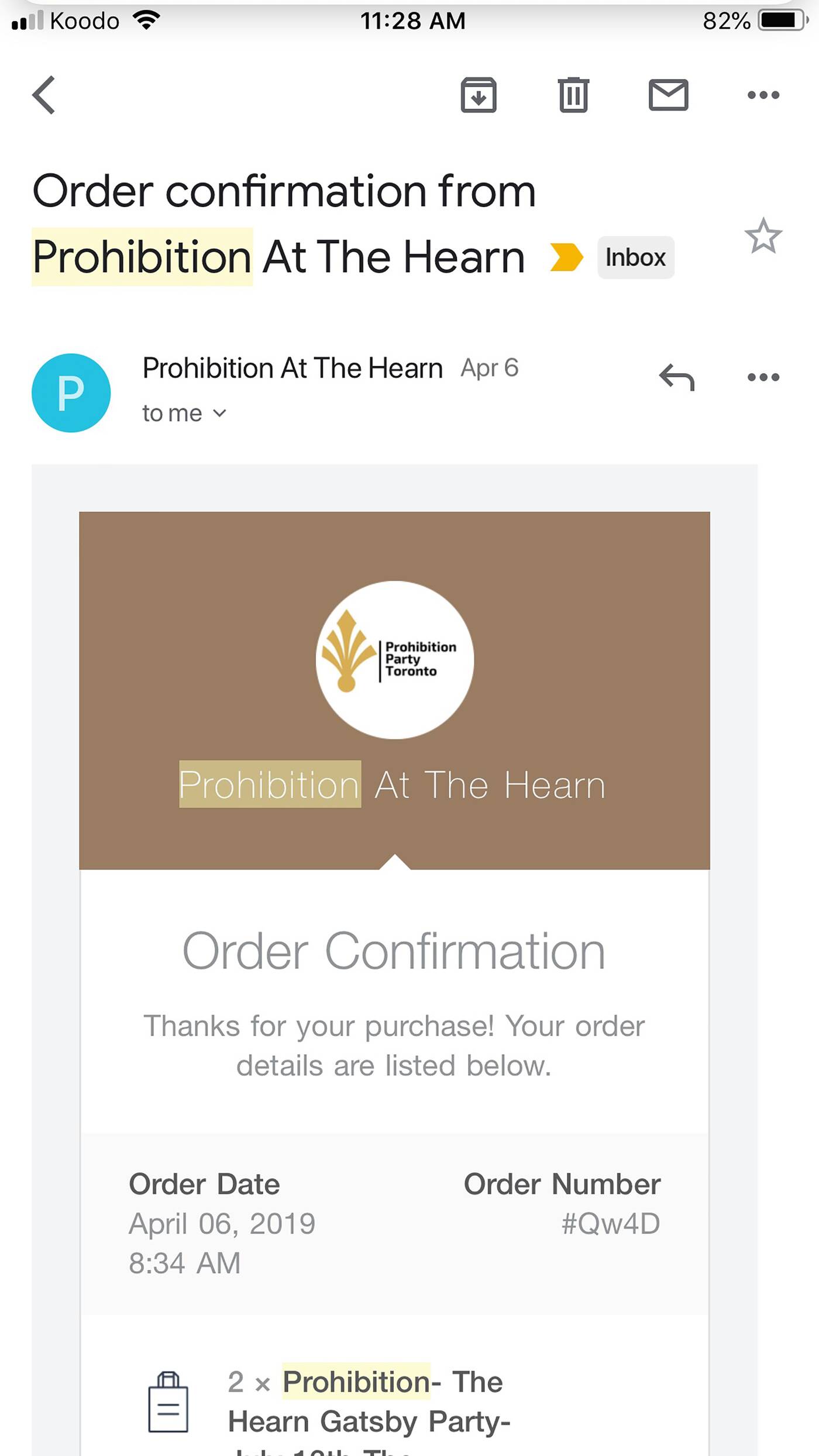 But, she never did, and Stewart never received her tickets.

Since then, Stewart has been calling and emailing Stephens, but there has been no response.

“I don’t know where this money is going,” Stewart said.

She isn’t the only one who feels like this event is a scam. Andrew Yeung has compiled a list of at least 11 others who never received a ticket or refund for the event. Some paid up to $165 for a ticket.

“Scam artists. Zero customer service. These folks will take your money and disappear,” he wrote on the Prohibition Party Facebook page.

Yeung purchased a ticket back in January and also received a confirmation email, but never got a ticket.

“In my opinion, Hearn has always been a hard venue to secure and recently the venue was sold to another corporation,” Yeung said.

The Hearn has a contentious history. It is an almost-70-year-old vacant power plant in the Port Lands that requires events have a Temporary Occupancy Permit.

In 2017, the fire department issued a warning on the building and said that no events could be held in the space because it breached the Ontario Fire Code.

When media spoke to Stephens in April, she said, "The only reason we were granted permission to host an event is on the premise that we receive the fire and safety code permit from the city."

Stephens claimed they were the only event to get a Temporary Occupancy Permit because they hired several engineering firms, including LRI Engineering Inc., to ensure the Hearn complied with Fire Service's safety code.

He did have an “exploratory discussion” to learn about the event with a woman named Deborah Daniels who said she represented Prohibition Party, but this conversation never progressed to a proposal.

“For clarity, we have not had contact with Bethany Stephens,” Winton said.

This party is supposedly the first event to take place in the Hearn since the Ontario Power Generation controversially sold the plant to Studios of America Corporation in November for $16 million.

On the Prohibition Party Toronto website, the event’s mission is to “raise money to support the homeless of Toronto.”

Stephens said there was going to be a model home placed at the front of the Hearn as an artistic representation of affordable housing.

At the bottom of the event website, there is an “All Rights Reserved” statement. The copyright reads, “2018 Prohibition Party Toronto,” but this is the first year of the event, which means it should, in theory, be registered in 2019.

On Square Inc., the third party website where Prohibition Party tickets are sold, a “1940s Weekend” is also advertised at the Hearn on July 20 and 21. The Prohibition Party is still scheduled for July 13. The website and Facebook page are both still active.

After messaging and posting on the Prohibition Party Facebook page, and repeatedly emailing and calling the event organizer, there has been no response.