Toronto might get a ferry service from Etobicoke to downtown

Commuters living along Toronto's western waterfront could soon have the option of taking a high-speed boat to work, as opposed to cramming onto a crowded bus, train or expressway.

A downtown water taxi service called The Otter Guy is in the process of launching a ferry that would run back and forth between the fast-growing community of Humber Bay Shores and downtown Toronto's Yonge Street Water Taxi Terminal.

"The general idea is to provide ferries back and forth to Humber Bay during the rush hour (7 a.m. to 9 a.m. and 4:30 p.m. till 6:30 p.m.) during the week," reads an open letter authored by Otter Guy president Alex Nosal.

A supplementary "island express run" would be available on weekends for locals to take advantage of the Toronto Islands and their beautiful beaches. 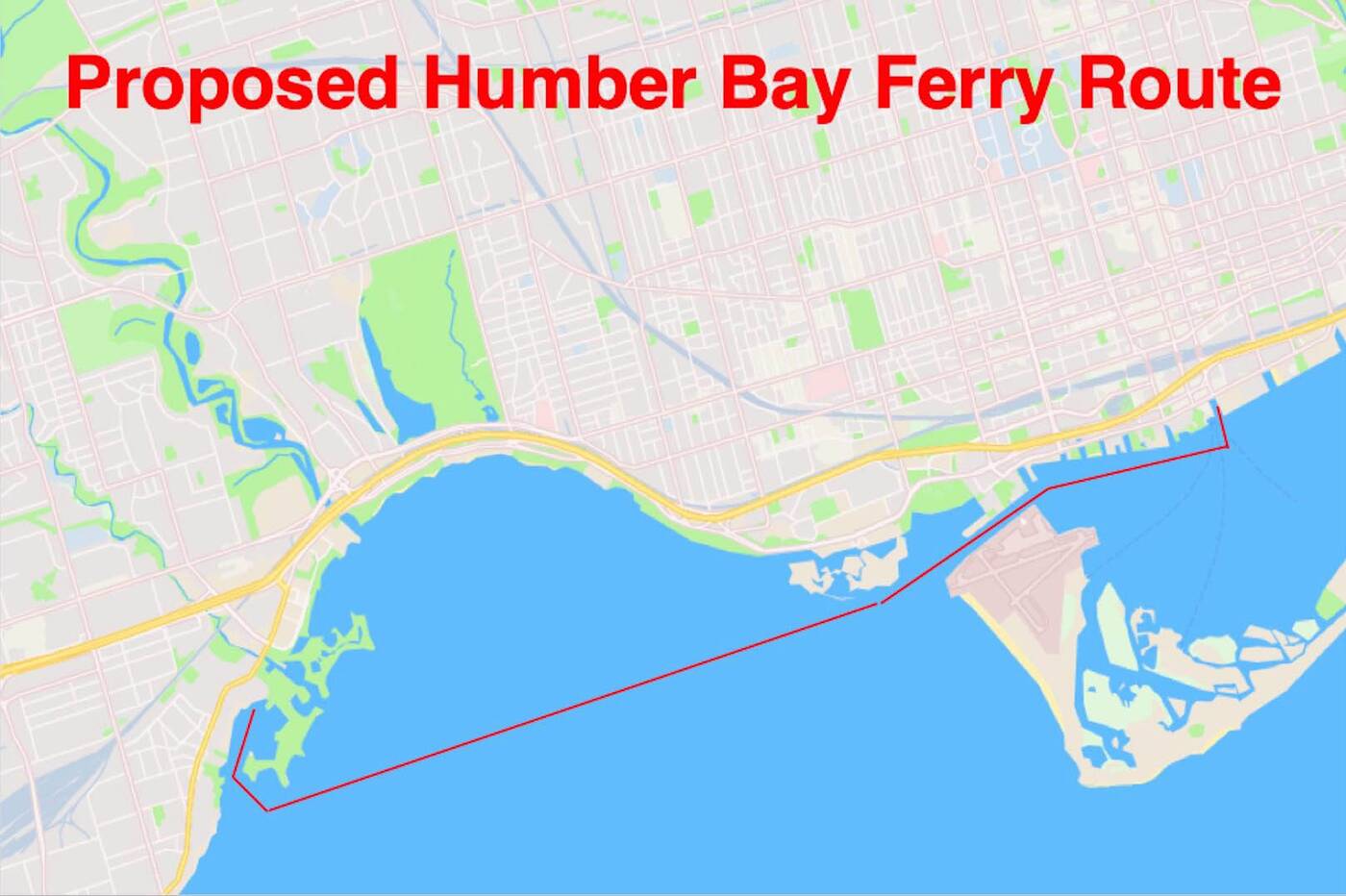 A direct ferry between Humber Bay Shores and the Yonge Street Water Taxi Terminal would alleviate some road congestion by giving hundreds of commuters another way to work. Image via The Otter Guy Inc.

Nosal's letter, posted to the Humber Bay Shores Discussion Facebook page earlier this month, invites locals to a town hall meeting on May 30, where they'll get to ask questions and share feedback regarding the proposed ferry service.

The City of Toronto has already pledged to assist The Otter Guy in establishing the first ever Humber Bay/Yonge St. ferry service, according to Nosal, but only if the company can generate a sufficient amount of community support and meet certain environmental criteria.

The latter shouldn't be hard — Nosal says that his company has already ordered "an electric, 200 passenger, high-speed catamaran" for the purpose of ferrying Humber Bay Shores residents downtown.

"The boats will be climate controlled with heads (nautical term for washrooms), bicycle racks, Wi-Fi and comfortable seating," he writes. "The electric propulsion system will provide a quiet ride while emitting zero carbon emissions except when the generator kicks in for high speed journeys across the open parts of the lake."

The private water taxi company hopes that the City will provide "basic weather shelters and restrooms" at the proposed Humber Bay location. 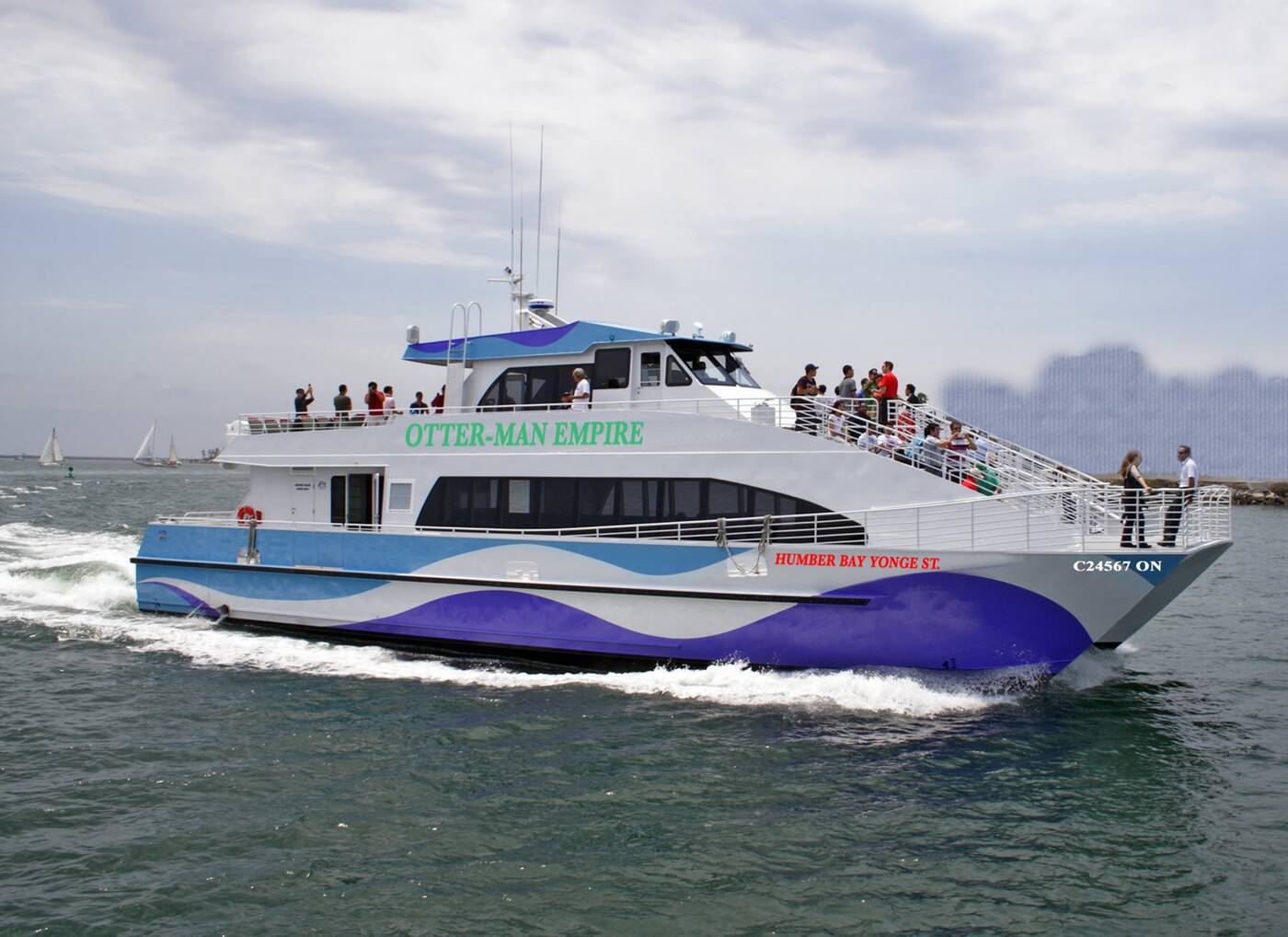 A high speed, electricity-powered, all weather vessel will run six trips per day during rush hour between Humber Bay Shores and Yonge Street Water Taxi Terminal if all goes as planned. Image via The Otter Guy Inc.

This idea has been in the works for some time — in fact, The Otter Guy's website still shows an April 2019 launch date for the Humber Bay Shores ferry service.

While delayed, the project does appear to be gaining momentum ahead of the town hall meeting at 2282 Lakeshore Blvd. W. on May 30.

"$15 no traffic on a boat vs. a minimum $20 uber ride in traffic — boat it is!" commented one local on the Humber Bay Shores Facebook page, referring to the service's rumoured (but not yet confirmed) per-trip fare.

"As an FYI, at Harbourfront at Yonge, there is a 5 minute walk Path route (all indoors) which takes you directly to Union station," noted another commenter. "So, this ferry service from Humber Bay to Harbourfront would be great, and would also allow you to make further transit connections easily if needed."

As Nosal makes clear in his letter, community support is crucial for getting the city on board.

"By attending the meeting we hope that we can really get down to the nitty gritty aspects," he writes, "and make a final determination of how to proceed forward."