People gathered in the rain at Nathan Philips Square last night for a vigil honouring the victims of two mosque shootings in New Zealand that left 49 people dead and 20 more seriously injured.

News of the attacks, which were filmed and live-streamed directly to Facebook by the gunman, hit international news yesterday. 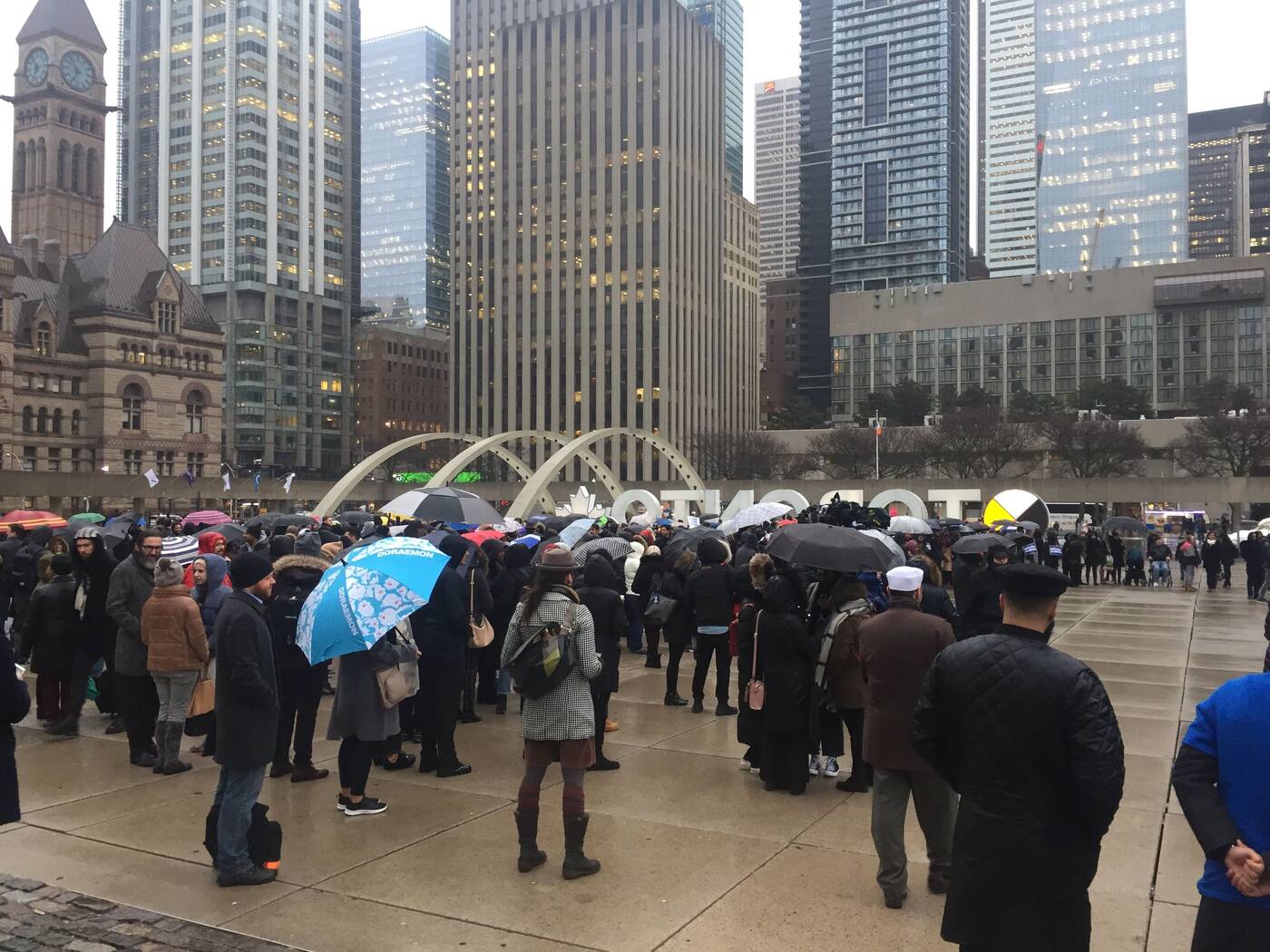 Hundreds of people gathered in the rain in solidarity with the victims of the mosque shooting in New Zealand Friday. Photo by Lisa Power.

The vigil—which saw the Toronto sign in Nathan Philips Square dimmed in the evening—was organized by the Muslim Youth Fellowship, Torontomuslims.com, Faith In The City, and Urban Alliance on Race Relations.

As Canadians mourn the loss of innocent victims during the #NewZealandMosqueAttack, dozens of youth from the Ahmadiyya Muslim Jama`at Canada gathered at a vigil in Toronto this evening, to convey their prayers and deliver the message of Love for All, Hatred for None. pic.twitter.com/OnsEpJuGr2

Supporters came with signs and t-shirts with messages of acceptance and anti-Islamophobia, with group-led prayers and readings from the Quran.

Vigil in Toronto this eve for victims of #ChristchurchMosqueShooting. Stand up in solidarity against hate and islamophobia.They have no place in our societies. pic.twitter.com/T8ShScE8Fr

Canada's immigration minister Ahmed Hussen took to the stage to speak to the crowds, as did Nadia Hasan, deputy director of the National Council of Canadian Muslims.

Toronto Vigil for the victims of the Christchurch mosque attack. pic.twitter.com/oWU8yMSufu

People around the world have been taking to social media to condemn the deadly attacks which took place in Christchurch, New Zealand, on Friday.

Vigil held in Toronto for victims of #NewZealand mosque attack. The #Toronto sign in front of City Hall has been dimmed today to mourn the victims of this vicious terror attack in #Christchurch. https://t.co/DBiNticg0I United Against #Islamophobia pic.twitter.com/iYQRzH4DD7

Both Toronto Police and Peel Police have stated that in the wake of the attack, they will have a "heightened presence in the community, focusing on places of worship – especially mosques".

On behalf of @TorontoPolice I want to send our condolences to those impacted by the heinous attacks in New Zealand. Please be assured that police officers will be patrolling your communities today, visiting mosques and other places of worship, to ensure everyone’s safety

Law enforcement was stationed at mosques around the city for most of yesterday.