Are you seeking somewhere fancy to brag about for your next vacation? A short cab ride could be all it takes to get there, if you live in what the prestigious American magazine Travel + Leisure refers to as "Toronto, Canada."

Toronto is one of only two spots in the country to appear on T+L's annual "50 best places to travel" list for 2019, the other being Alberta. As in the entire province of Alberta.

This will come as little surprise to those who've been following Toronto's tourism numbers. A record 44 million visitors spend almost $9 billion here in 2017 alone, more than 5 million of them coming from overseas for the first time ever.

What's unexpected about Travel + Leisure's decision to include Toronto on its list of the 50 best places to travel in 2019 is why.

These are the 50 best places to travel to in 2019 https://t.co/6Uhz3QoyS6 pic.twitter.com/BJSpdD0YQZ

"The city is raising its art game," writes the New York-based magazine. "The Museum of Contemporary Art Toronto Canada has reopened after a three-year, $13 million relocation and expansion, and 2019 will see the launch of the Toronto Biennial of Art."

T+L recommends that travelers plan an entire visit around Winter Stations or Nuit Blanche Toronto—both awesome events, but like... not as awesome as anything that happens when it's warm outside. Just saying.

The magazine also cites Toronto's booming luxury boutique hotel scene as a reason to check it out, which is fair if you like being inside hotels more than out and about in the city.

"Check in to one of the many new properties," reads the blurb on Toronto. "The Kimpton Saint George displays over 700 works by Canadian artists, the Anndore House has in-room record players, and the luxe St. Regis Toronto brings old-school opulence to the city."

The top 50 list is arranged in alphabetical order, so it's hard to say in this case how Toronto stacks up against other locales, like The Grenadines, Cambodia or Houston, Texas. 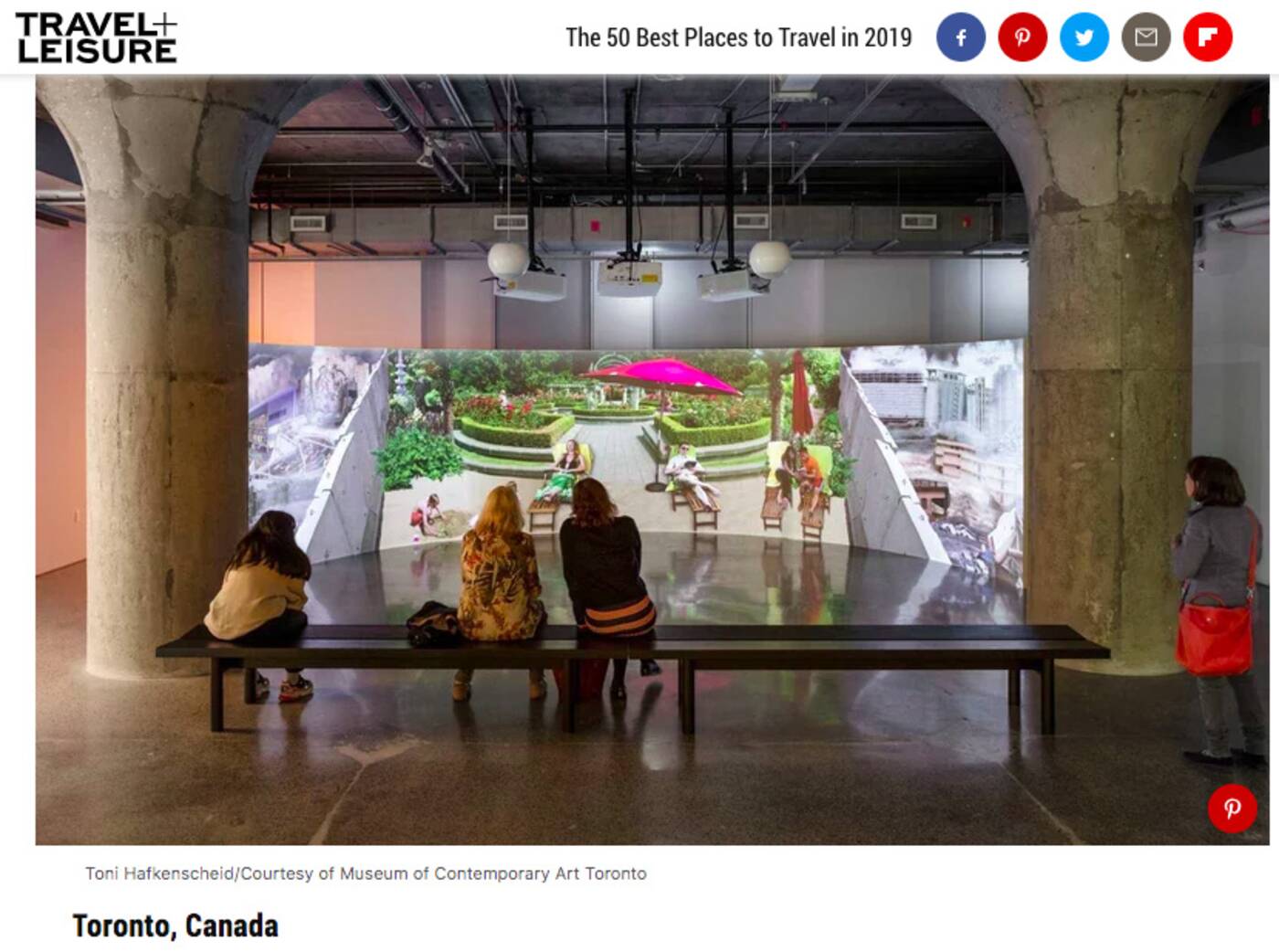 Travel + Leisure recommends Toronto as one of its 50 best places to visit in 2019 because of art galleries like MOCA. Screenshot of Travel + Leisure, Image via MOCA.

In any case, the image used to illustrate our fair city is kind of a depressing one compared to all of the mountains and waterfalls in T+L's list.

Come to Toronto, it seems to say, if you like sitting indoors and looking at pictures of people enjoying beautiful garden landscapes.

We're really much better of a place to visit between June and September.