Dozens of animal rights activists took to the aisles of a Stockyards District supermarket this weekend with smoke bombs, 3D masks and a disturbing but important message for shoppers: "Don't buy the humane lie, cows are being skinned alive."

The multi-part demonstration began at Nations Experience on St. Clair West Saturday afternoon, when roughly 60 members of Direct Action Everywhere marched through the store with signs decrying a nearby slaughterhouse. 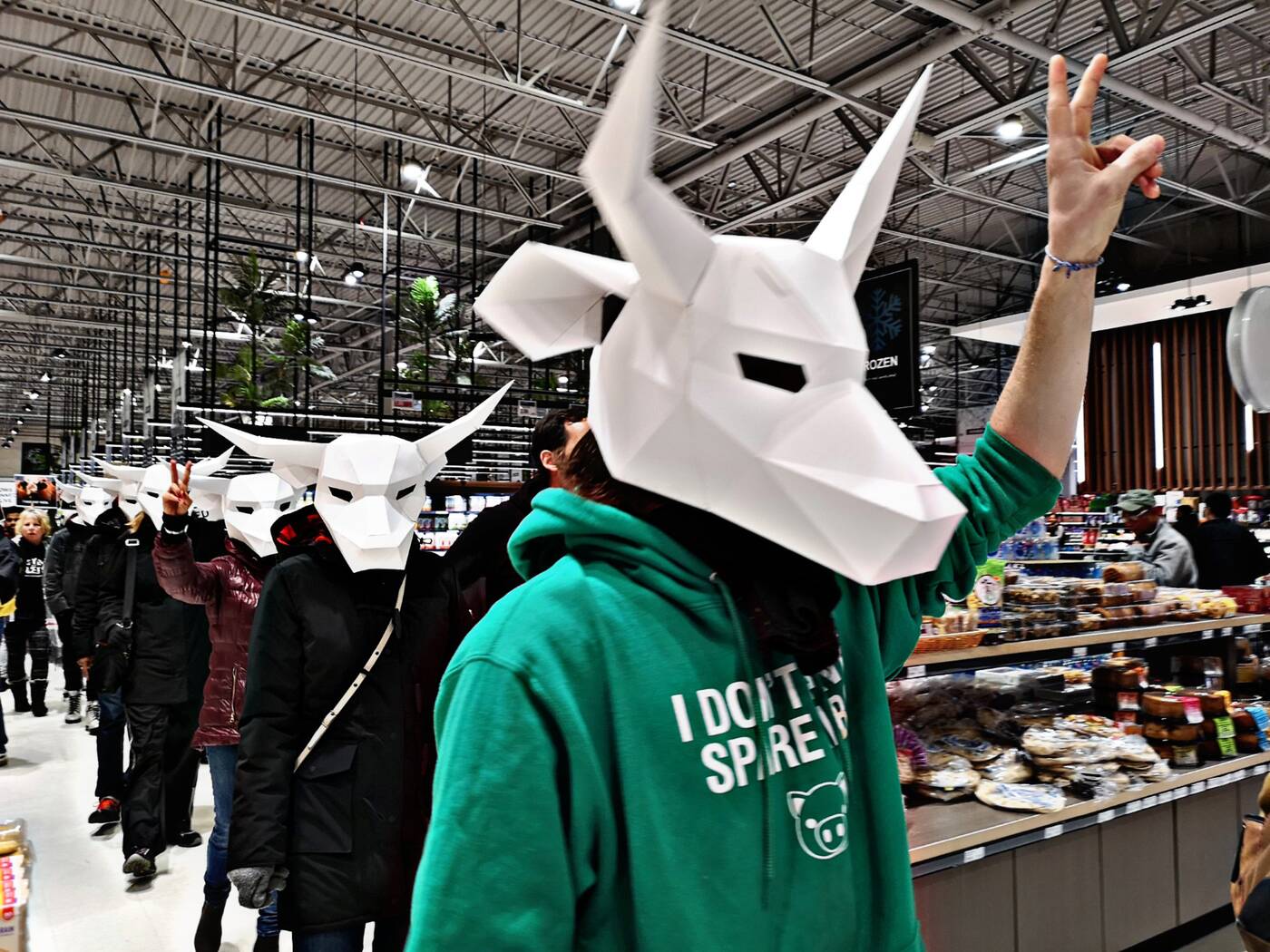 That slaughterhouse, Ryding Regency Meat Packers, has come under intense scrutiny over the past few years for its alleged inhumane treatment of animals. Many critics have panned it as "the most violent place in Toronto" and nearly 200,000 have signed a petition calling for it to be shut down.

Backlash against the slaughterhouse hit a fever pitch in 2017 after Toronto Cow Save activist Len Goldberg captured video footage of workers skinning cows alive through an open window at the back of the building. 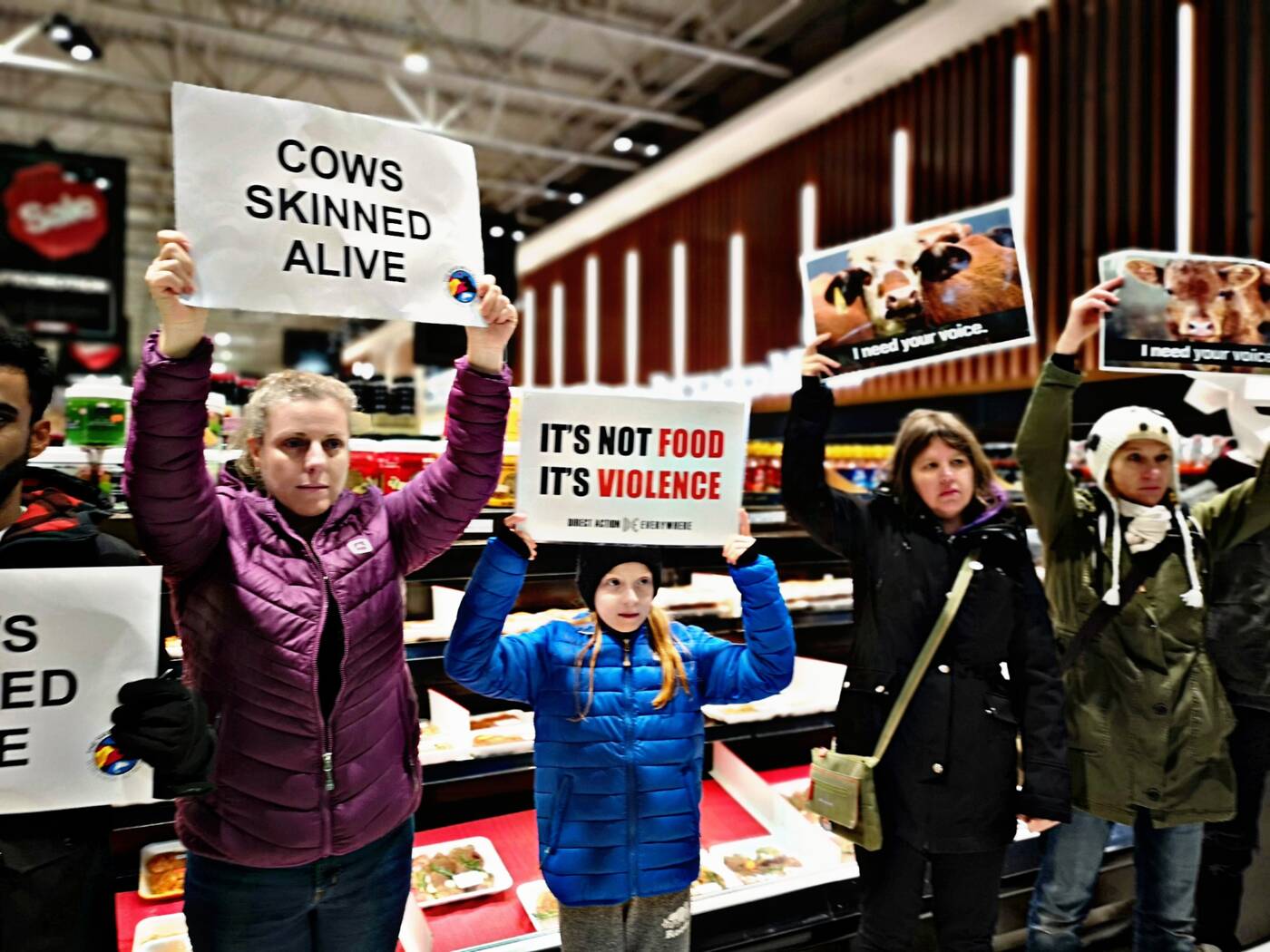 "Footage obtained clearly shows a large brown cow thrashing about on the floor, trying to get up, as blood gushes out of a gaping wound on her neck," reads a petition addressed to the Canadian Food Inspection Agency (CFIA) following the video's publication.

"A black-and-white cow similarly struggles on the floor, while a worker bends over and cuts her throat. Cows hoisted upside down, dangling from one leg, appear to be still conscious with their eye lids opening and closing, while workers tear off the skin from their faces with knives." 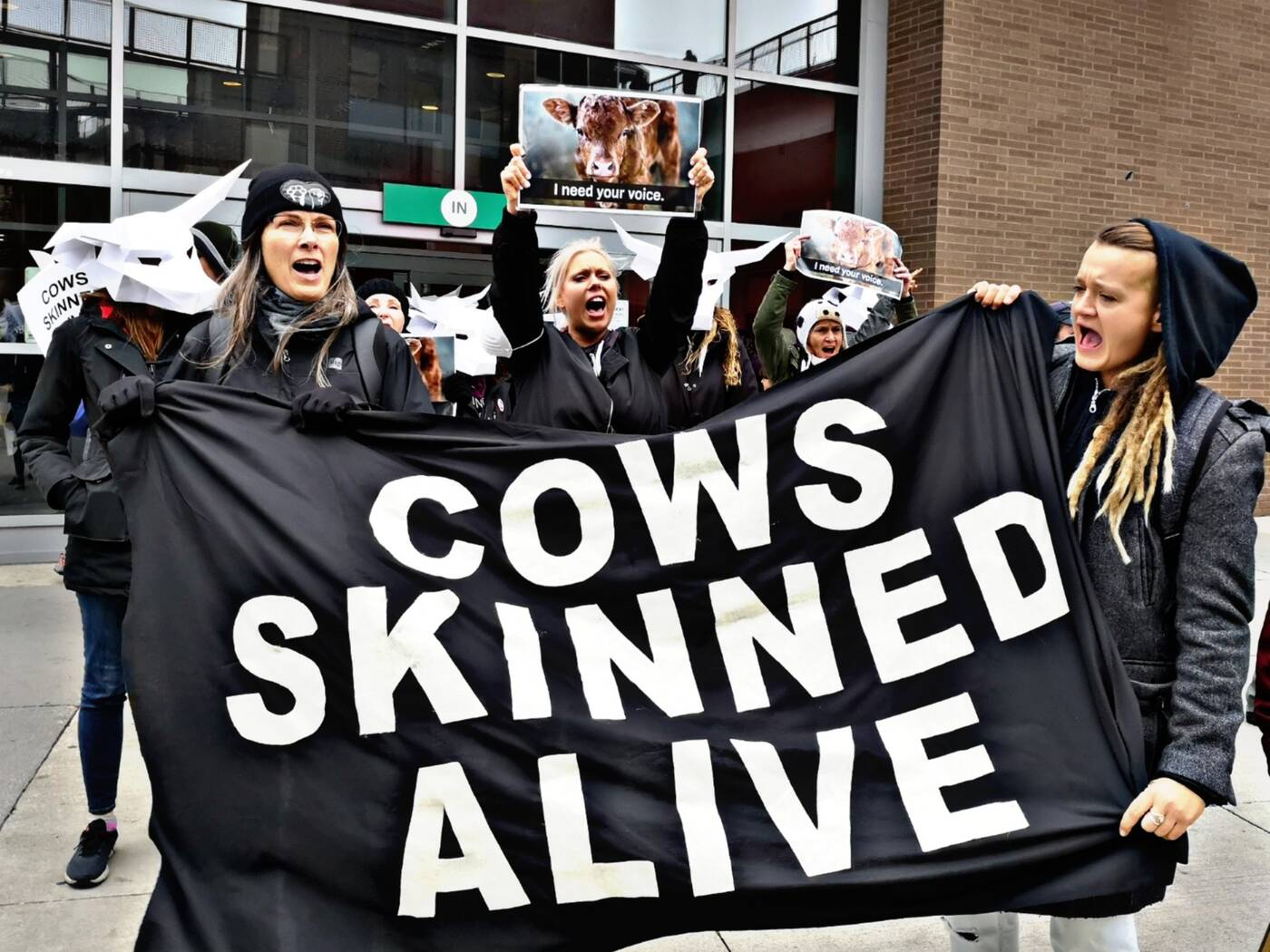 After raising awareness of the issue at Nations on Saturday, the activists from Direct Action Everywhere marched to Ryding Regency Meat Packers on Glen Scarlett Road.

There, they set off smoke bombs and, once again vowed not to stop protesting until the slaughterhouse is shut down. 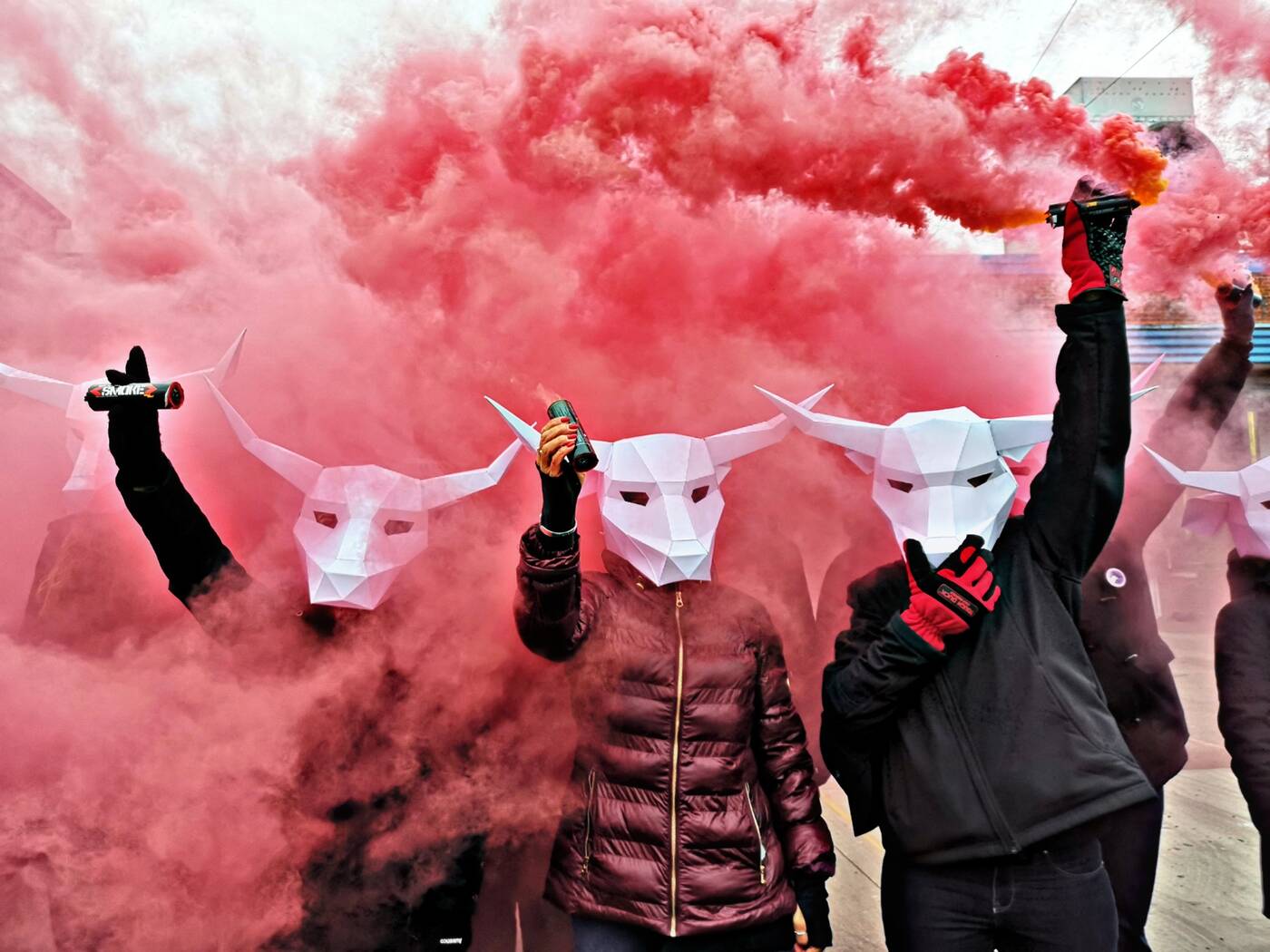 Last month, Members of Direct Action Everywhere stormed the CFIA's head office in North York and recorded more secret video footage — this time, of a Regional Chief Inspector admitting that nothing had yet been done to address the graphic footage out of Ryding Regency.

The inspector said that his government agency was still collecting information, more than a year after the video was shot, to determine whether or not a violation occurred. 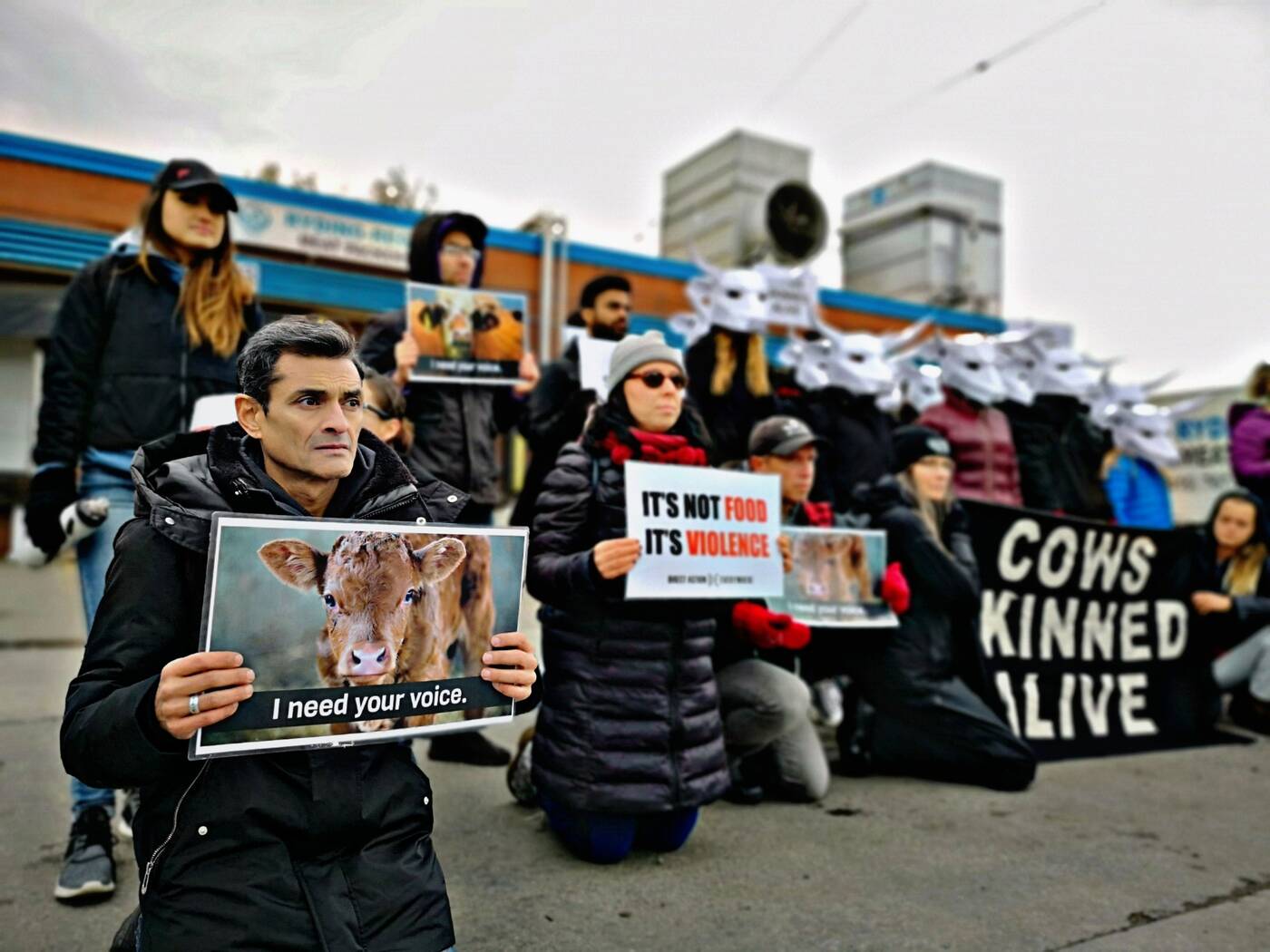 It is illegal to hoist a conscious cow in Canada, but, as the Canadian Federation of Humane Societies notes, current humane slaughter regulations are weak and inadequately enforced across the country.

Direct Action Everywhere, along with groups like Toronto Pig Save and Toronto Cow Save, is currently going after the Canadian government to "do the right thing" and immediately shut down Ryding-Regency Meat Packers.

"You don't have to wait for the government to intervene," reads a nearly 200,000-signature strong Change.org petition called 'Shut Down Ryding Regency Slaughterhouse.'

"You can stop these atrocities now by voting with your wallet and BOYCOTTING the animal agriculture industry. STOP supporting this cruelty."