Riverdale Farm is the stuff childhood dreams are made of.

Home to as many animals as good Ol' MacDonald's estate, this historic 7.5-acre plot of land resting along the Don River is the perfect destination for families with kids in tow and anyone looking for a rural retreat from urban Toronto. 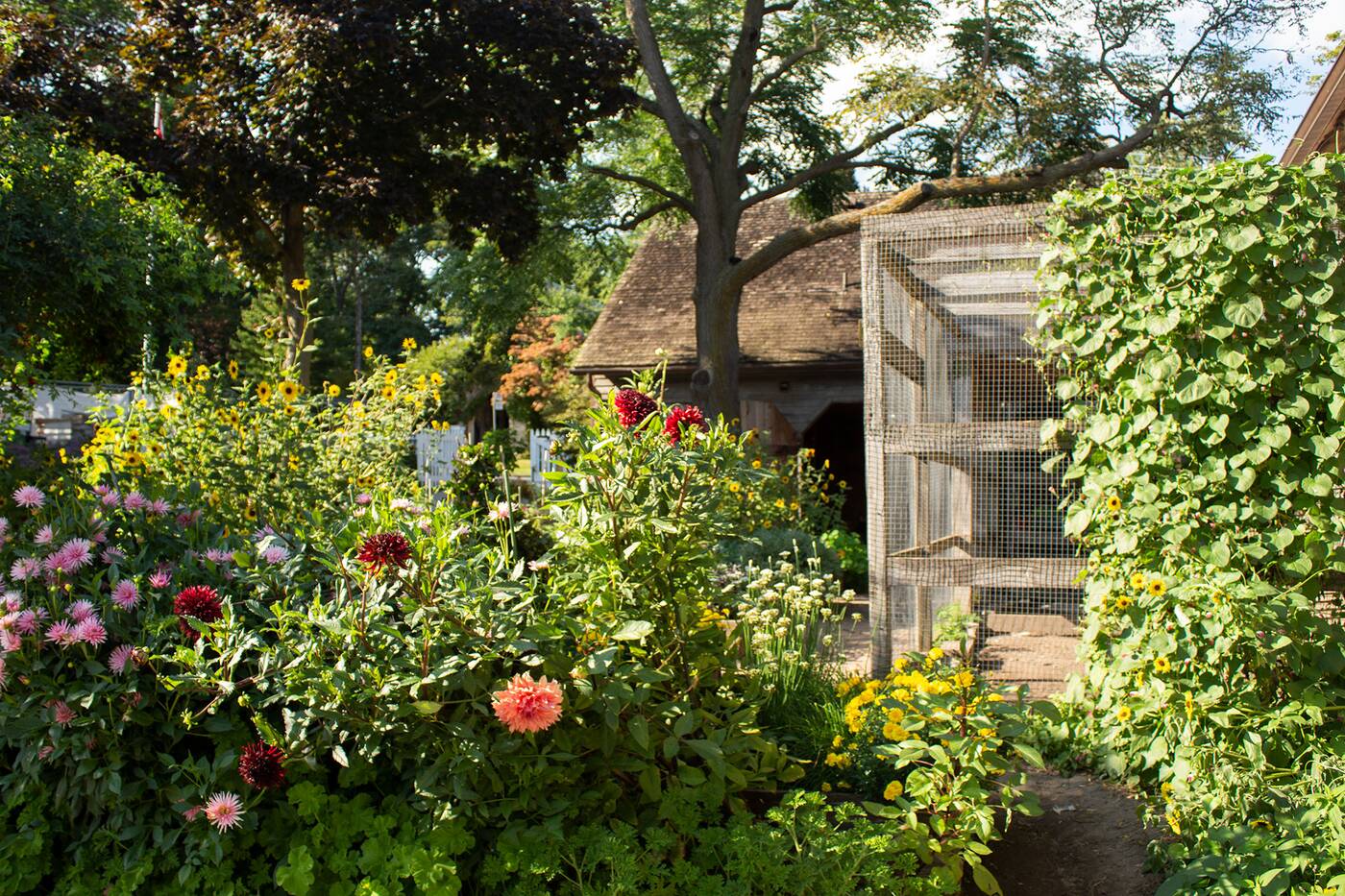 Riverdale Farm is a 7.4-acre piece of land sitting along the southern portion of the Don River.

Located not far from several junior and senior public schools, the city-operated farm is ideally situated in the heart of residential Cabbagetown. Like other attractions like Evergreen Brickworks and Todmorden Mills, it sits at the very bottom of the scenic Don Valley. 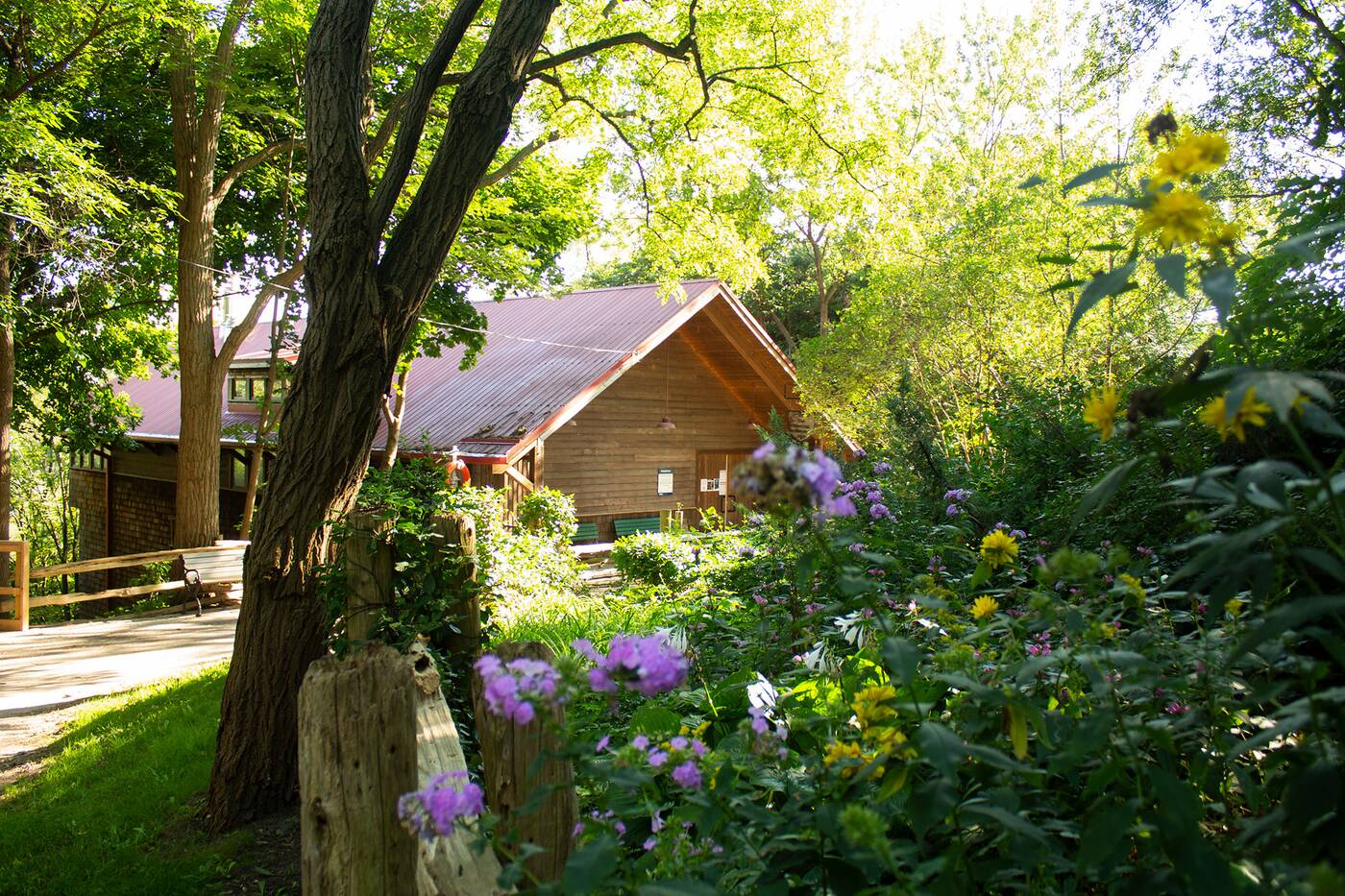 The Meeting House is a three-storey building that hosts crafts classes like pottery and weaving.

Accessible from Castle Frank subway station and connected to Riverdale Park West, the farm's main entrance also directly faces the entry to the Toronto Necropolis: an oddly apropos neighbour in a cycle-0f-life kind of way. 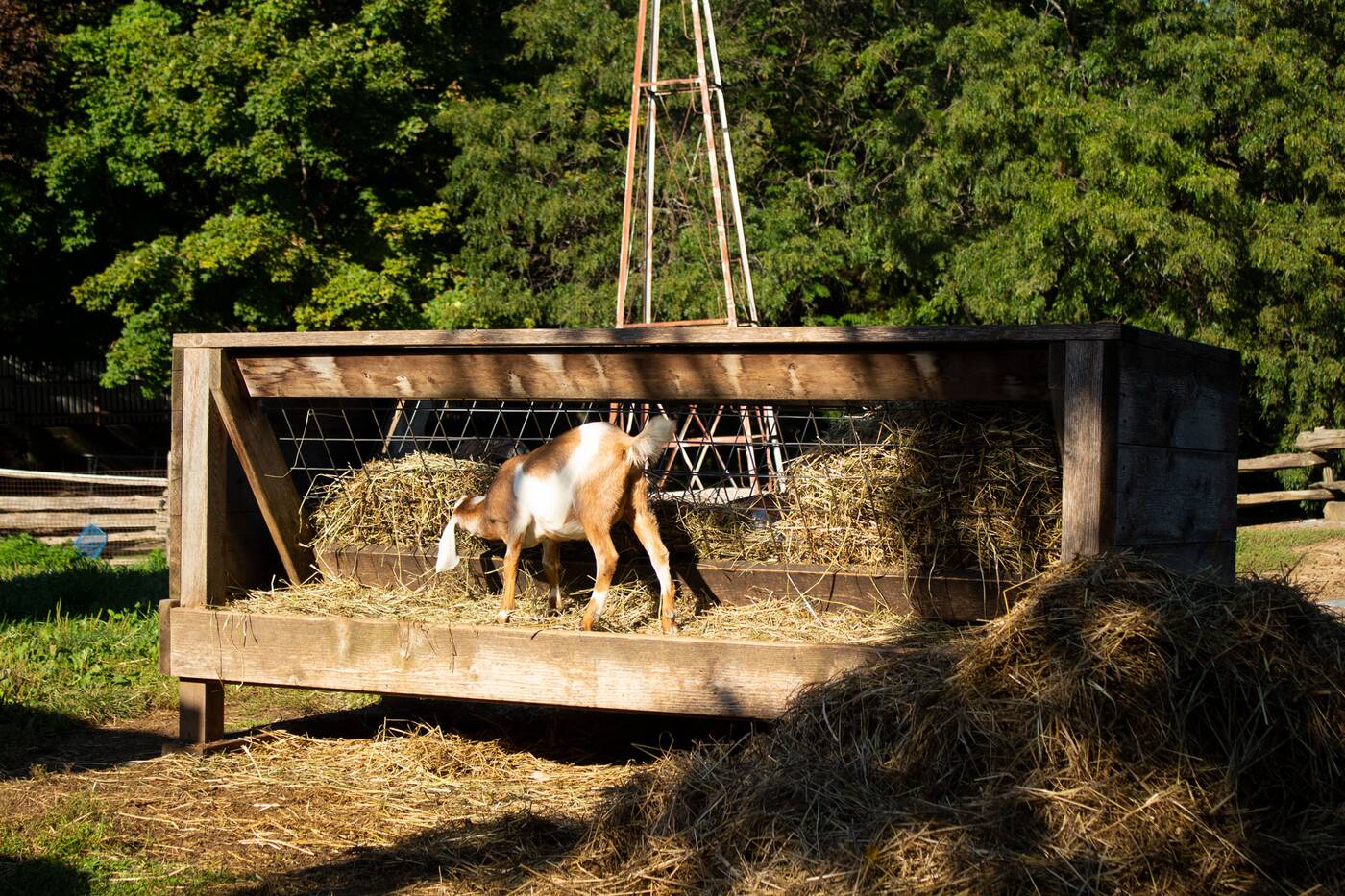 The goat paddock sits next to the sheep on a hilly part of the farm.

It's free of charge to enter the farm, which is open from 9 a.m. to 5 p.m daily all year round, even on public holidays. Between September and June, the farm's Meeting House also hosts workshops like pottery and weaving. 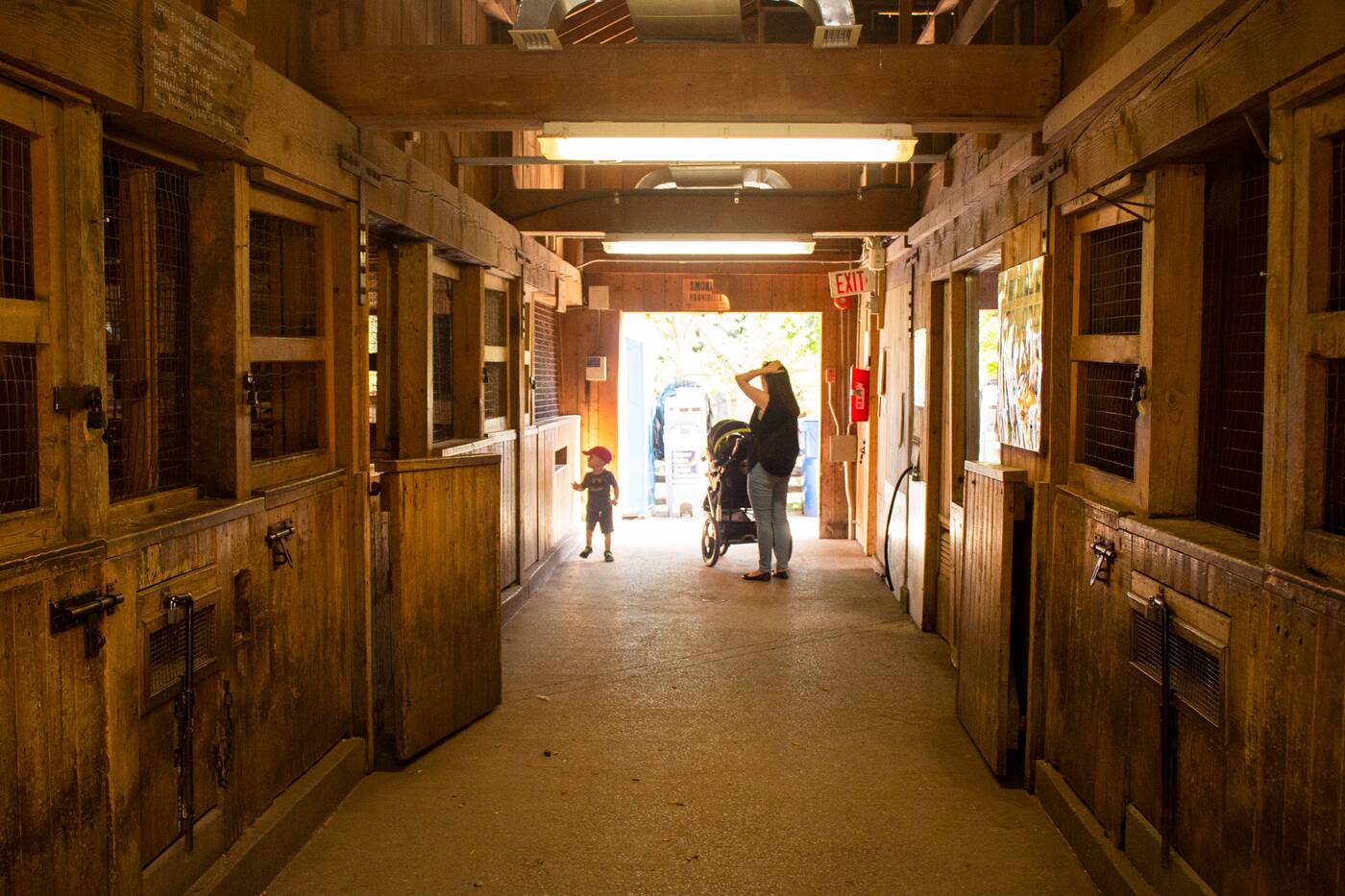 A solid tour of the entire area can be dragged out to as long as 45 minutes if walking without a ward; if exploring with young ones, maybe longer. 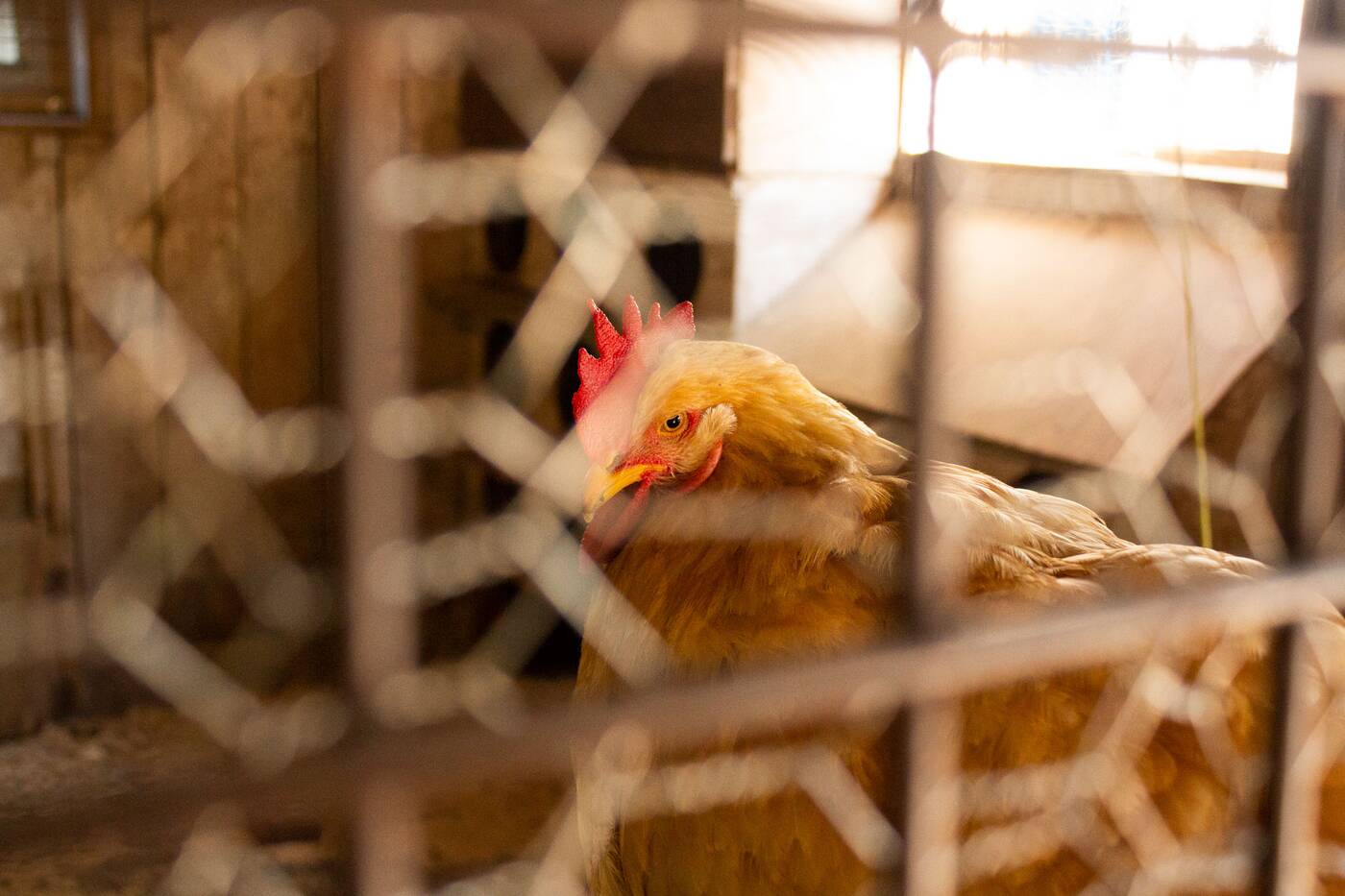 Touching and feeding the animals at the Riverdale Farm is forbidden.

It's important to keep in mind that this farm isn't a petting zoo, meaning touching or feeding the animals isn't allowed. 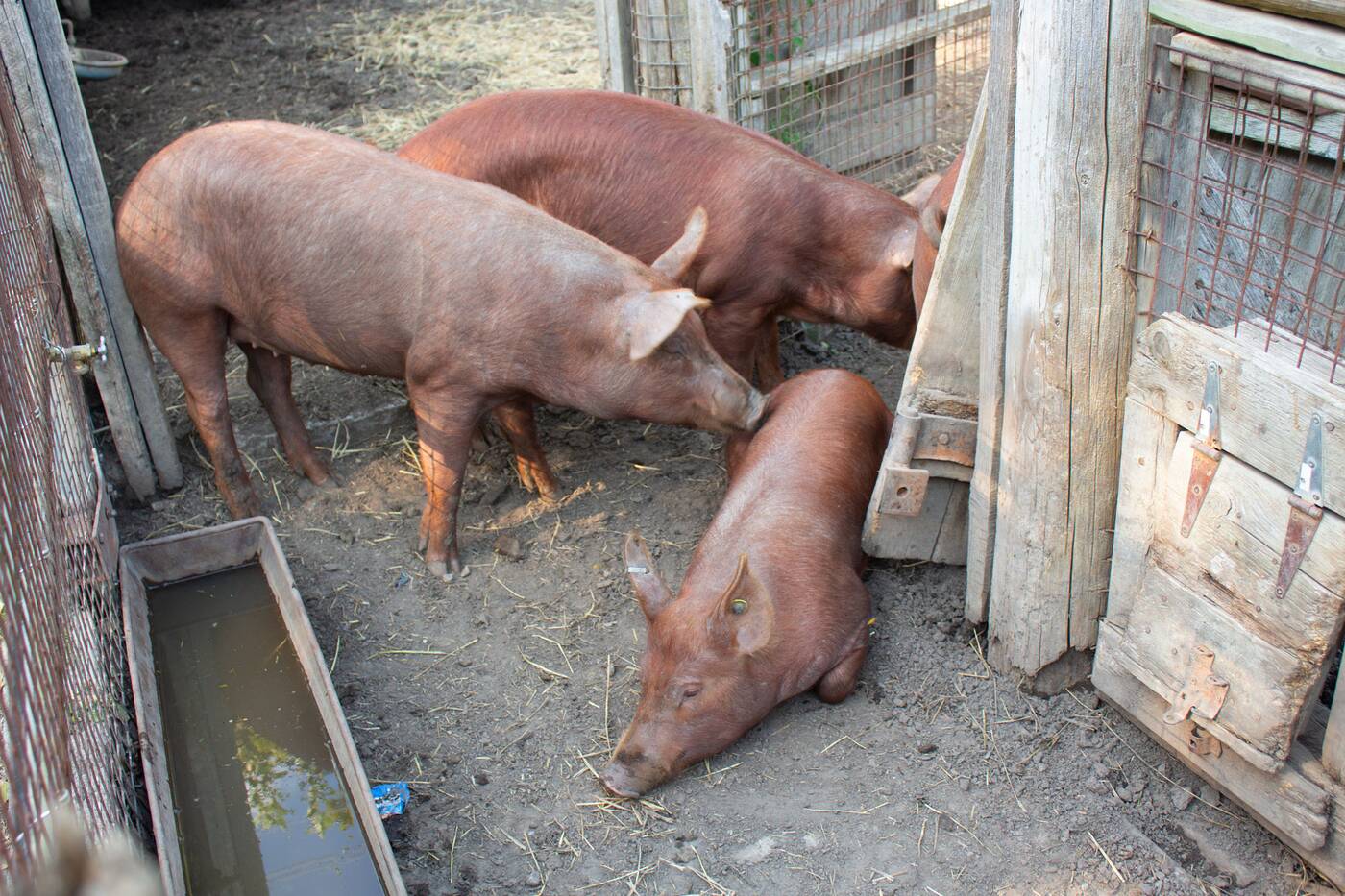 The whole farm comprises of several areas, including poultry and pig barns, plus stables for horses, cows, goats, and sheep that let you get pretty up close and personal. There are also several historic structures like the Donnybrook Ruin tower, The Residence, and the Francey Barn. 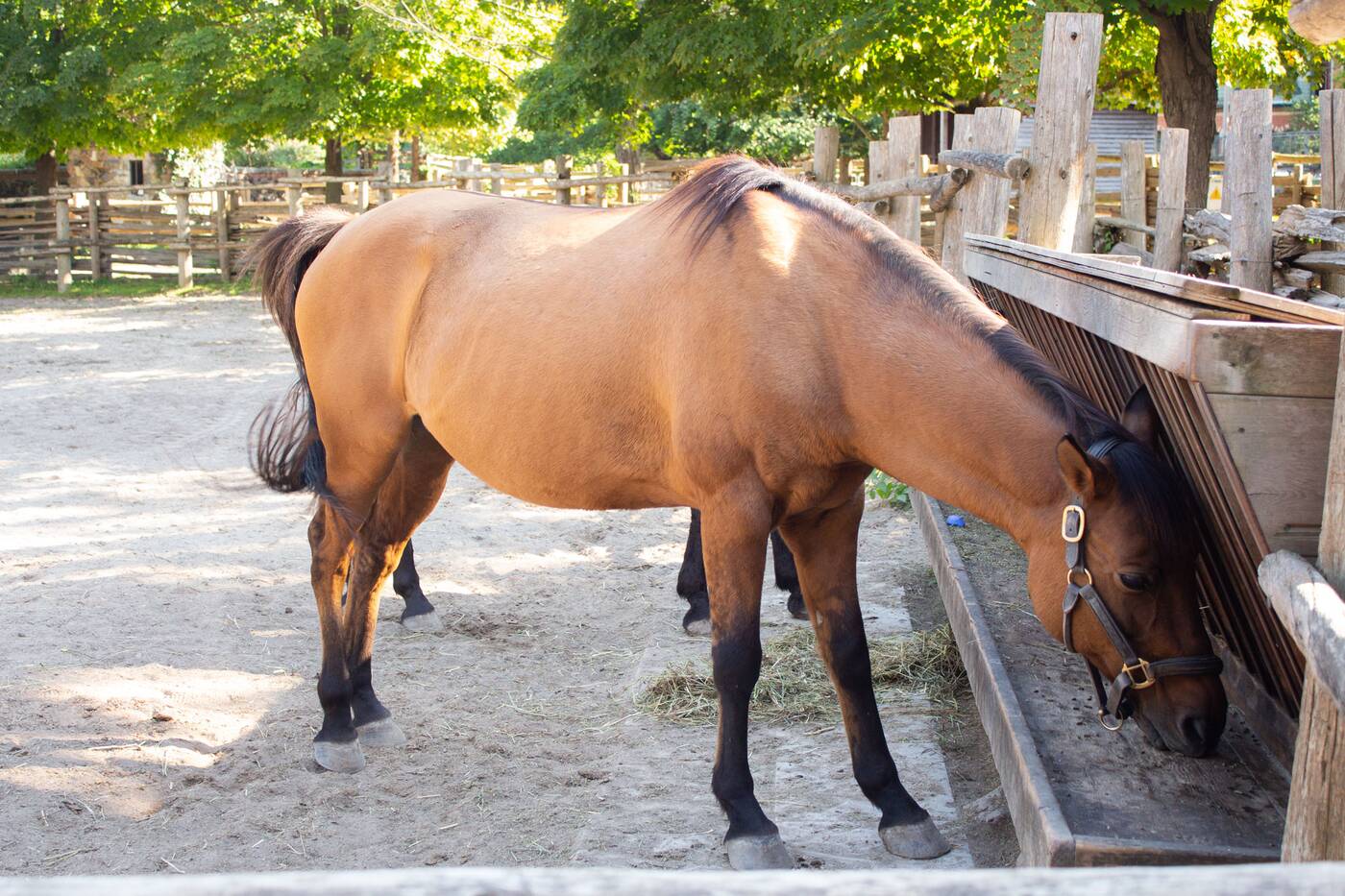 The horse paddock is located just south of the Francey Barn, where horse equipment is stored.

The land is well maintained by farmers who tend to the animals, flowers, and the butterfly, herb, and veggie gardens. More likely than not, these people will be more than happy to give you the lay of the land and answer your burning farm life questions. 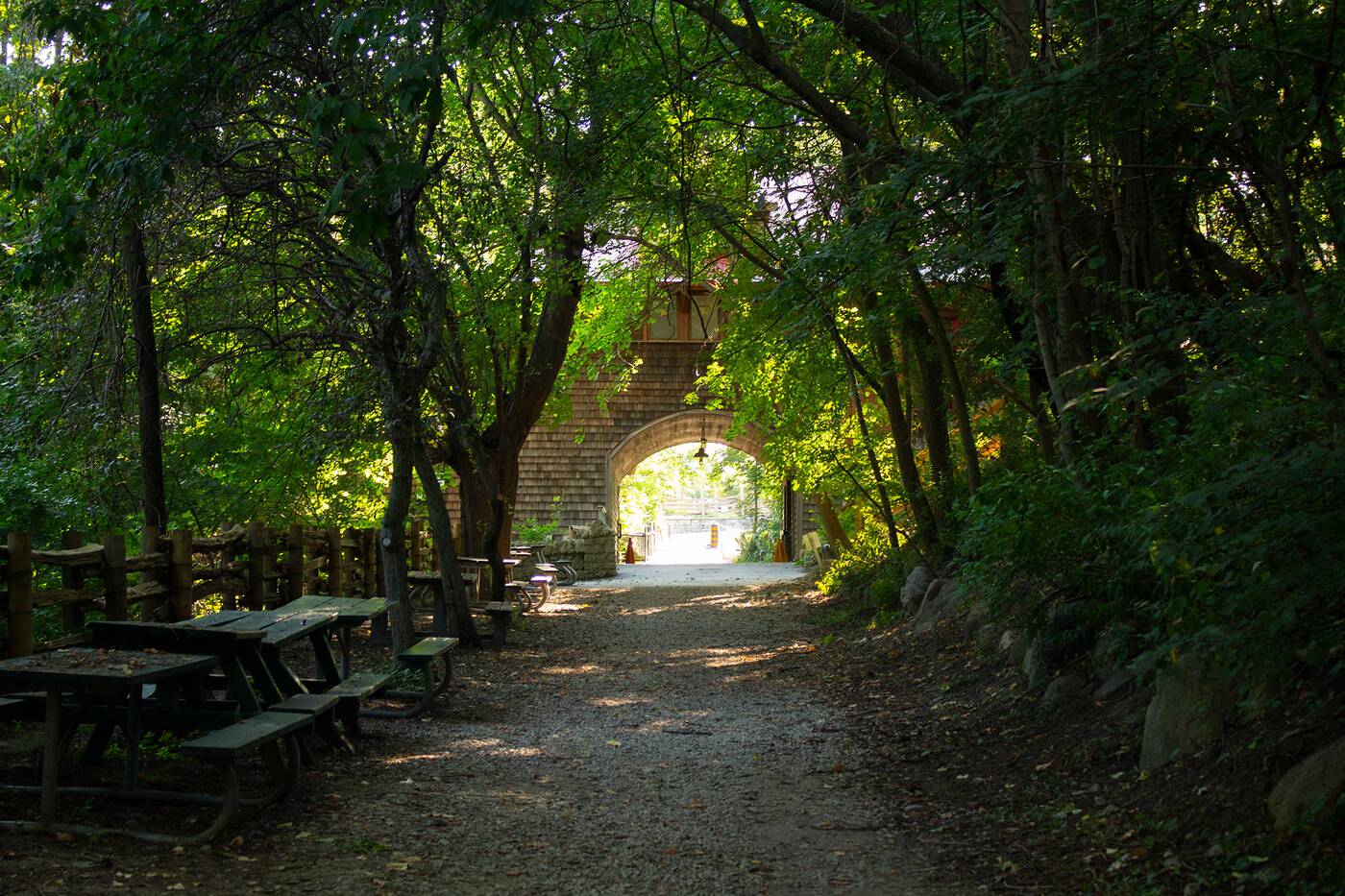 An old archway entrance leads down toward the duck ponds.

After descending into the main valley of the farm where the goat and sheep pens are, you'll notice several opportunities to head down from the main path to more secluded, ravine areas. 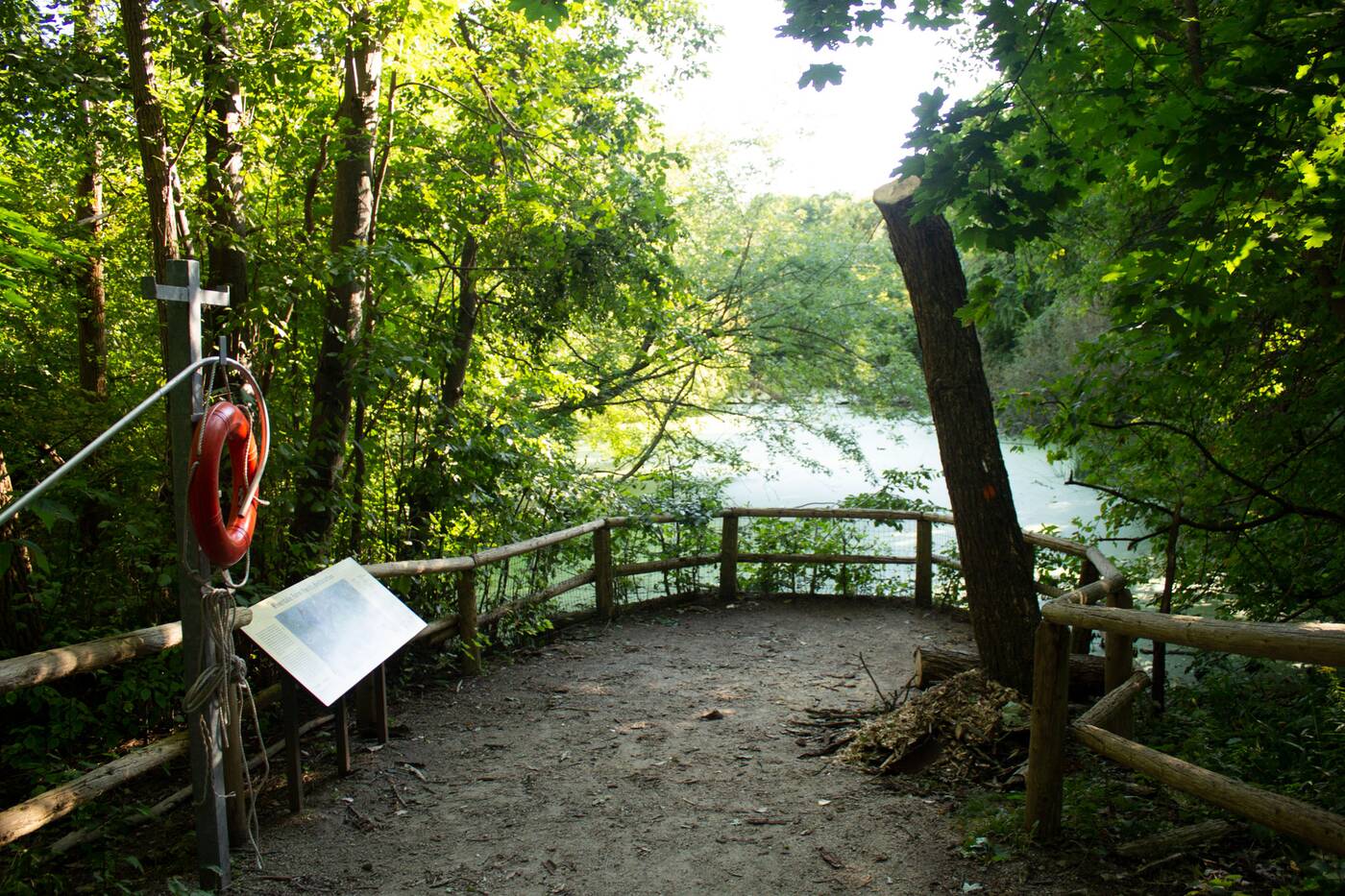 There are several viewing platforms that allow visitors to look out over the ponds.

These roads lead down to the duck ponds, with several waterfowl viewing platforms situated along the way before the path looks back up toward the Riverdale Farm Building. 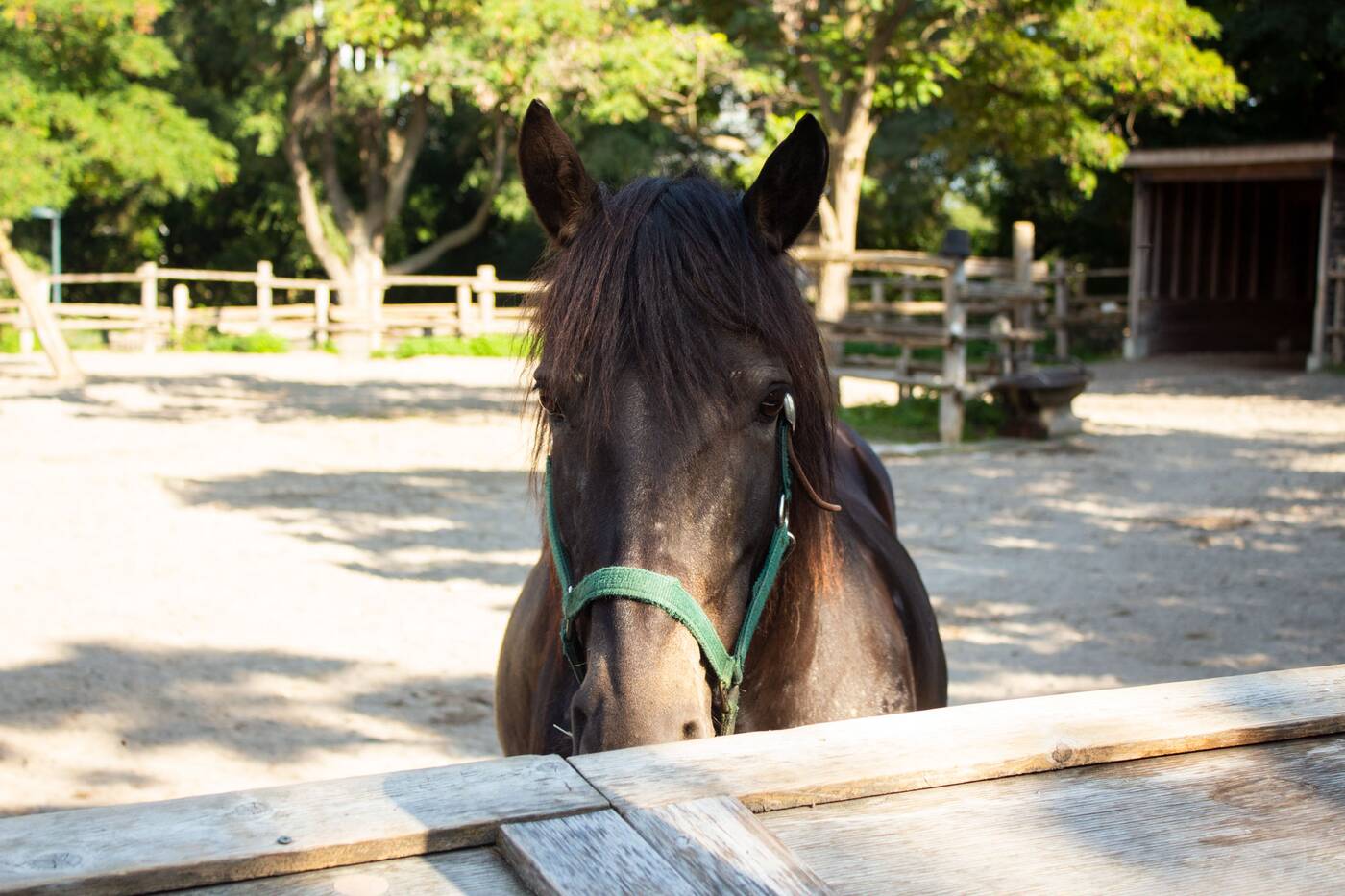 Horses are fed and groomed throughout the day in their paddock.

It's hard to imagine, but this part of the ravine was once the site of the Riverdale Zoo before it moved to Scarborough to become the Toronto Zoo as we know it today. 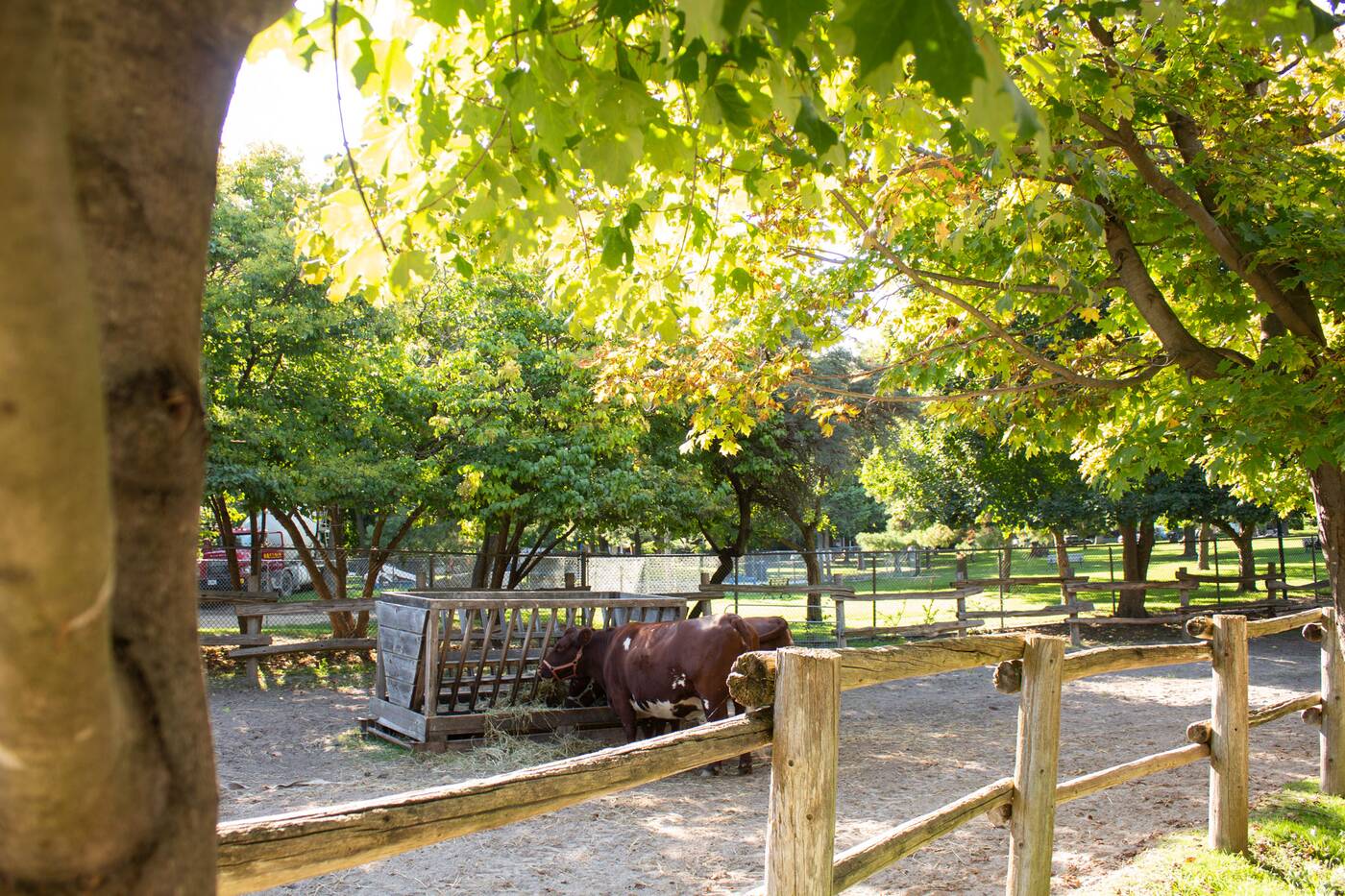 The south paddocks are where you'll find cows grazing.

Established in 1888 and operating until 1974, the Riverdale Zoo began with a herd of deer and two wolves, eventually expanding to housing animals like hippos, monkeys, and elephants. Shortly after it moved, Riverdale Farm opened up in its place in 1978. 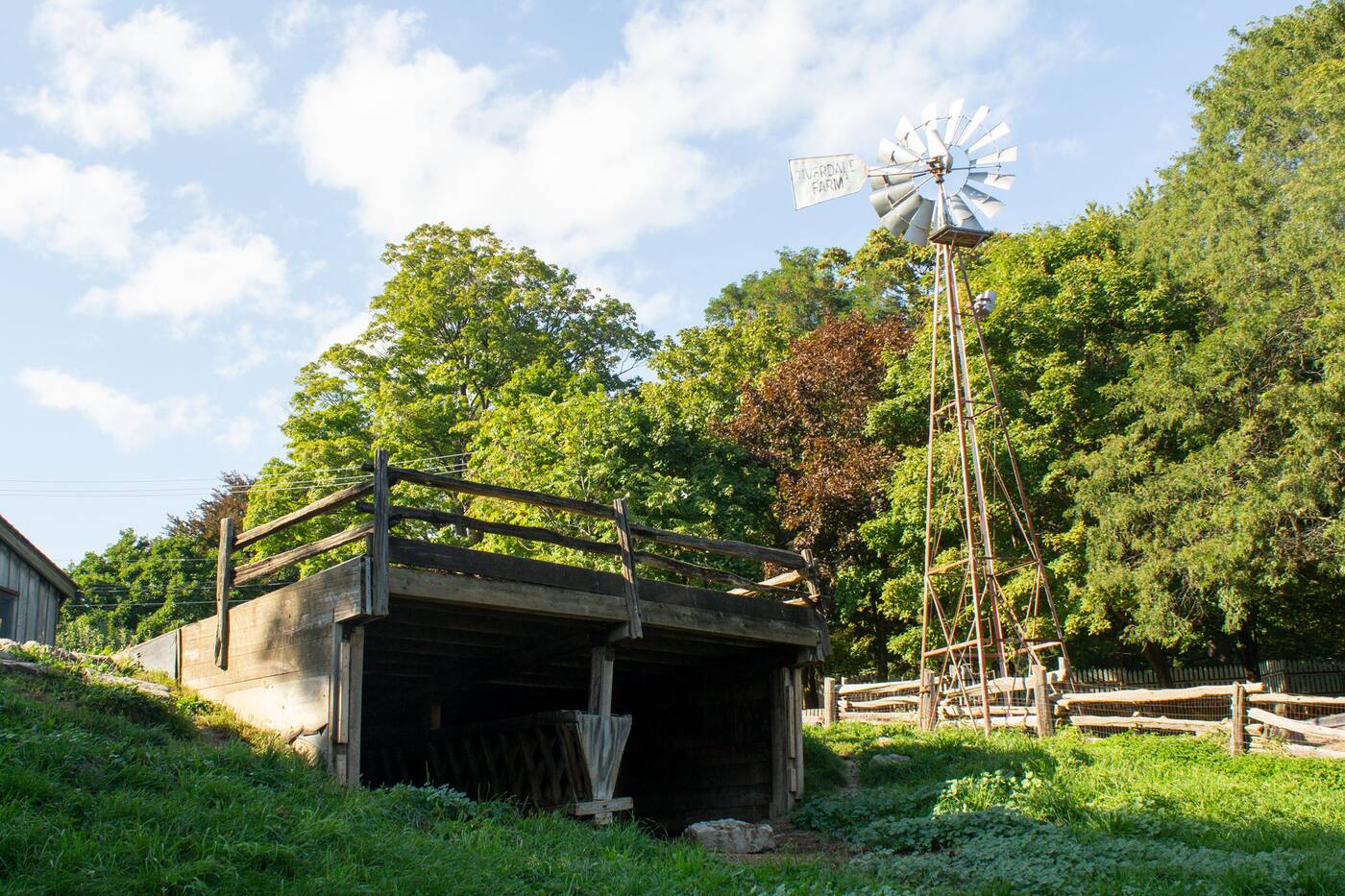 The sheep will disappear into their stable during feeding time.

Since then, Riverdale Farms has come under threat of closure, when the city proposed closing the property to cut costs in 2011.

But thanks to multiple large donations from corporations and donors, that threat has been thwarted, and Riverdale Farm is expected to continue operating until 2027, at least. 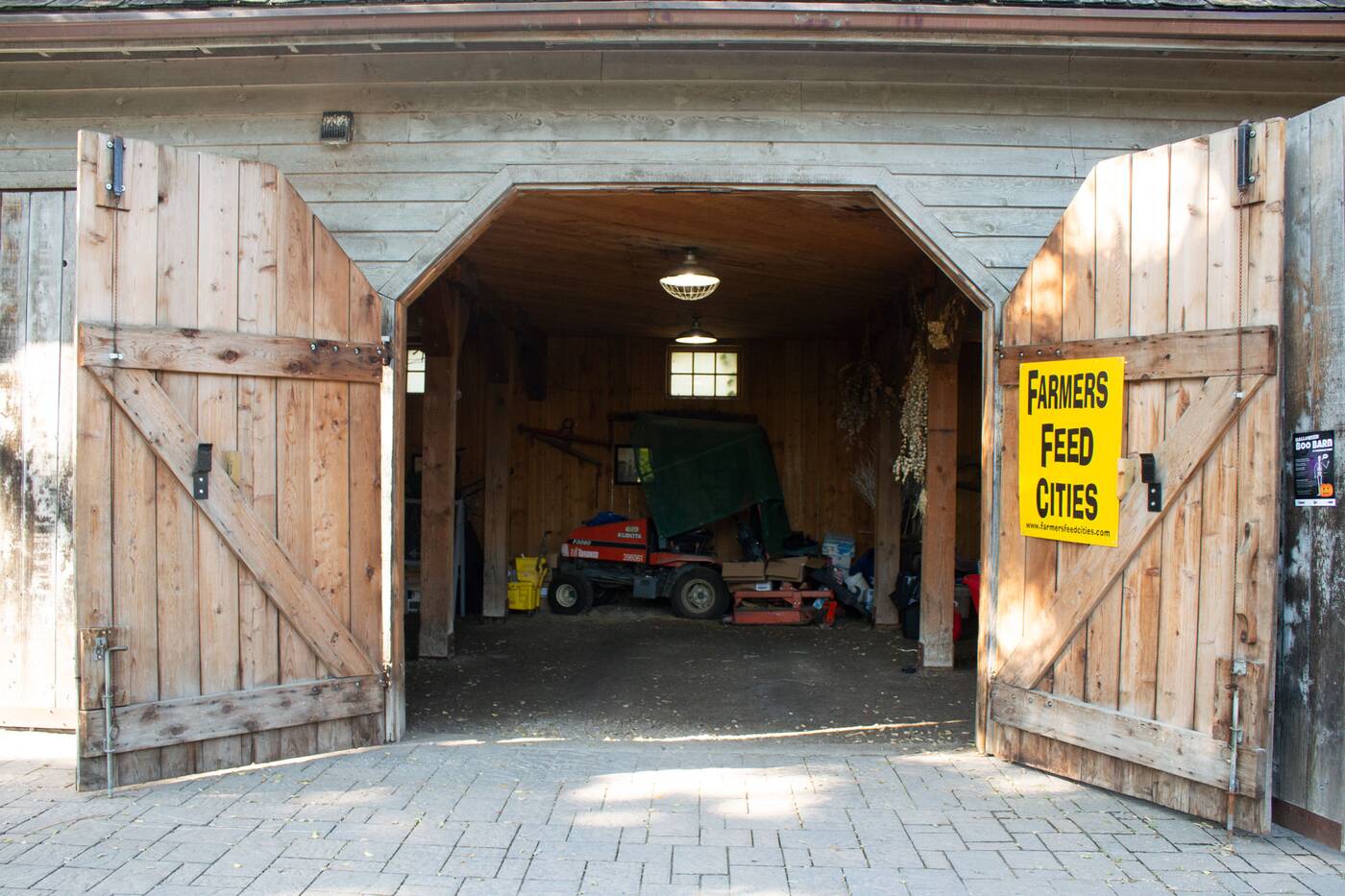