David Dunlap Observatory is Toronto's hidden pathway to the stars

The David Dunlap Observatory might appear modest at first glance. Tucked away off a winding tree-lined road near Yonge Street, just north of 16th Ave, the grounds on which it sits feels a bit like an afterthought.

It's nestled in a mostly residential area wrought with rolling tractor trucks and construction. 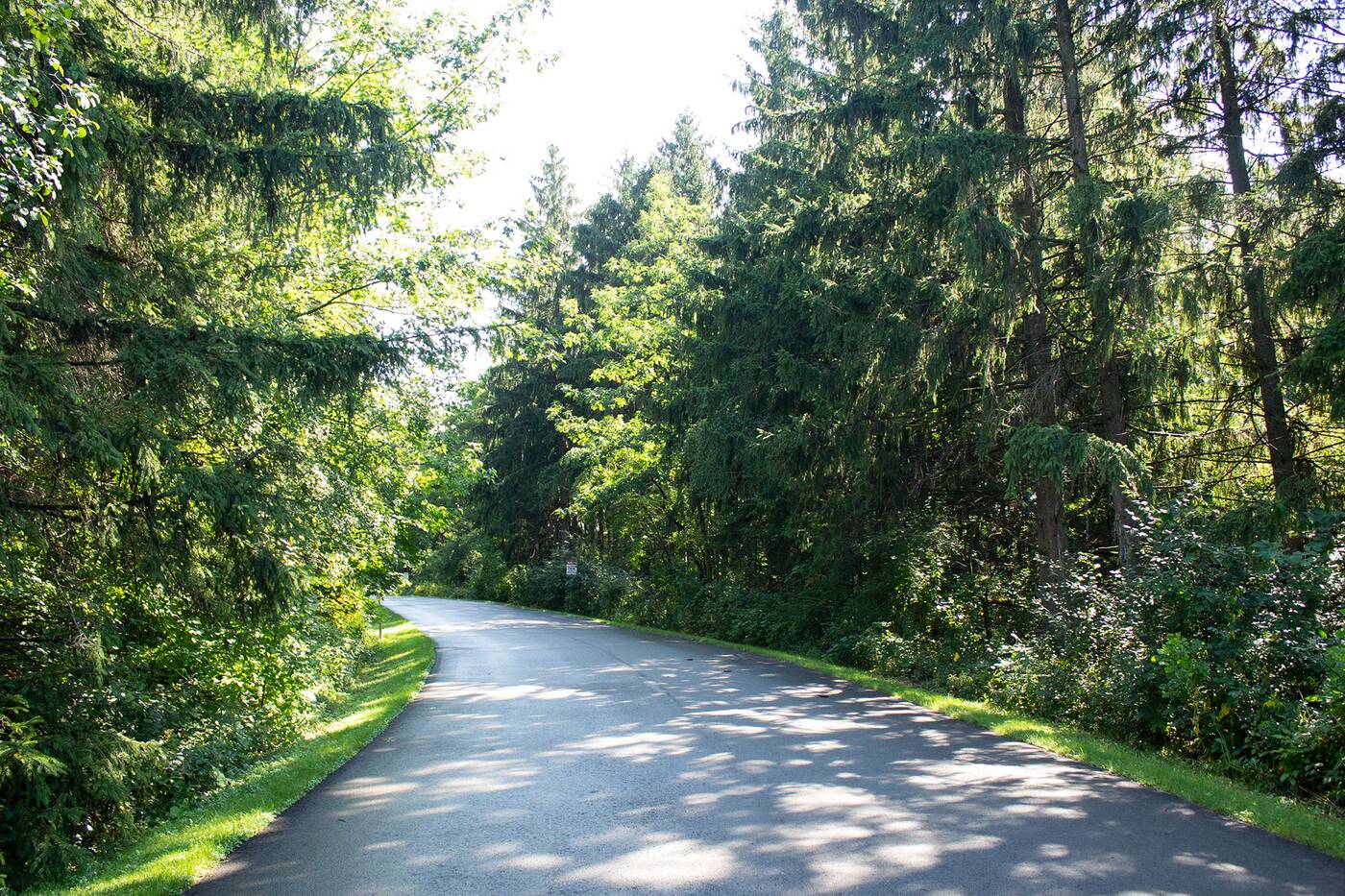 A winding path lined with trees will lead you from the main road to the observatory grounds.

Other than the presence of tall pines towering overhead, you'd never guess that a 189-acre clearing just beyond the curving entrance lane is home to Canada's largest optical telescope.

But it's neither the small stature nor the state of the grounds which have kept the David Dunlap Observatory largely in the shadow of the public eye for so long.

The site, which features an historic administration building next to the observatory, is an ideal destination for visitors on clear days. 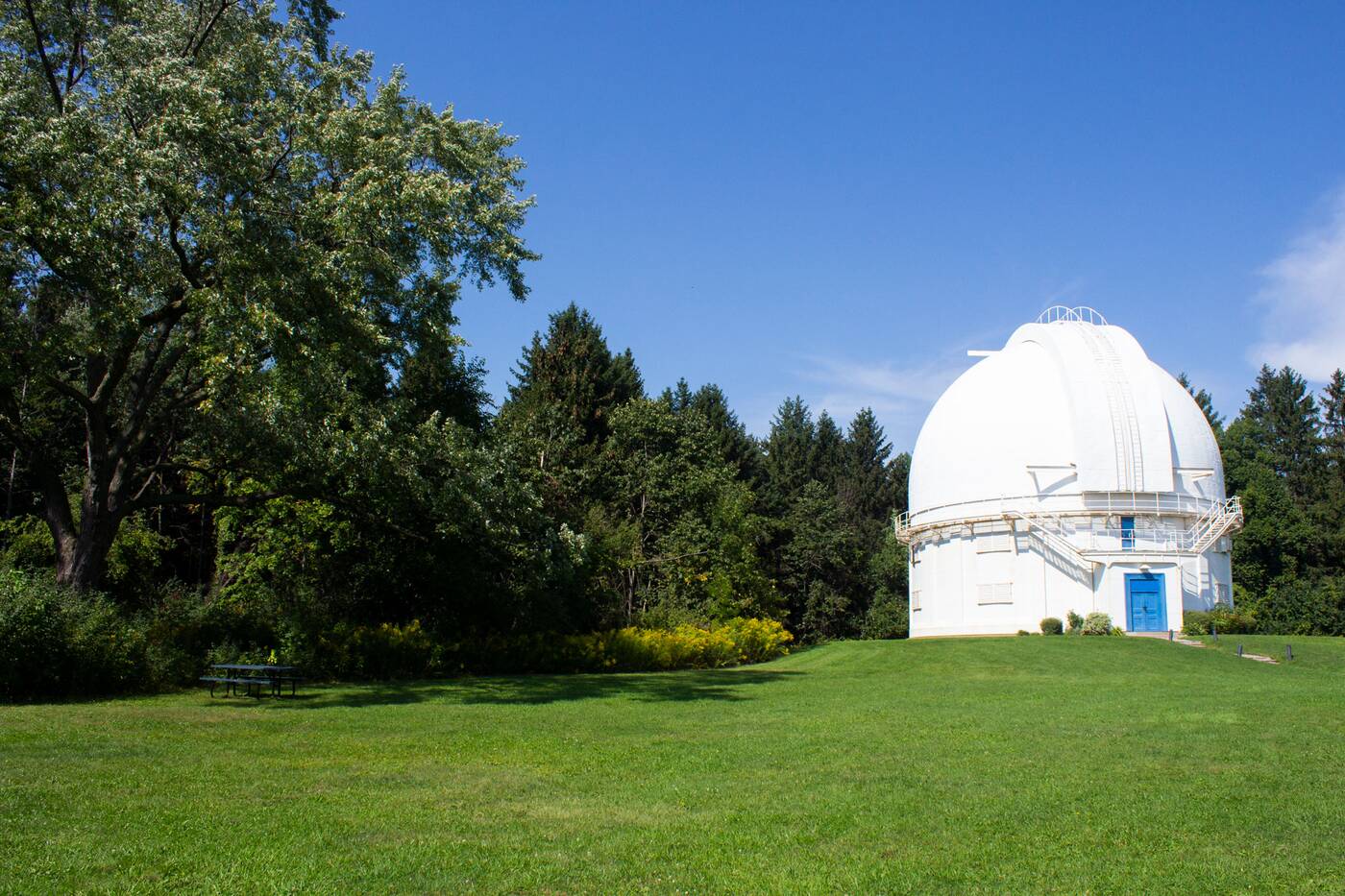 The David Dunlap Observatory was built in 1935 and was the home to the second largest telescope in the world at the time.

Despite its obvious historic and scientific value, the David Dunlap Observatory has been at the centre of a looming, controversial, at times bitter land battle between developers, advocacy groups, and the town of Richmond Hill for the last decade, where it's sat largely ignored until now.

When it opened in 1935, the David Dunlap Observatory was considered an international breakthrough. It had been a project years in the making, with astronomer and U of T professor Clarence Chant at the forefront, along with a wealthy miner and amateur astronomist, David Dunlap. 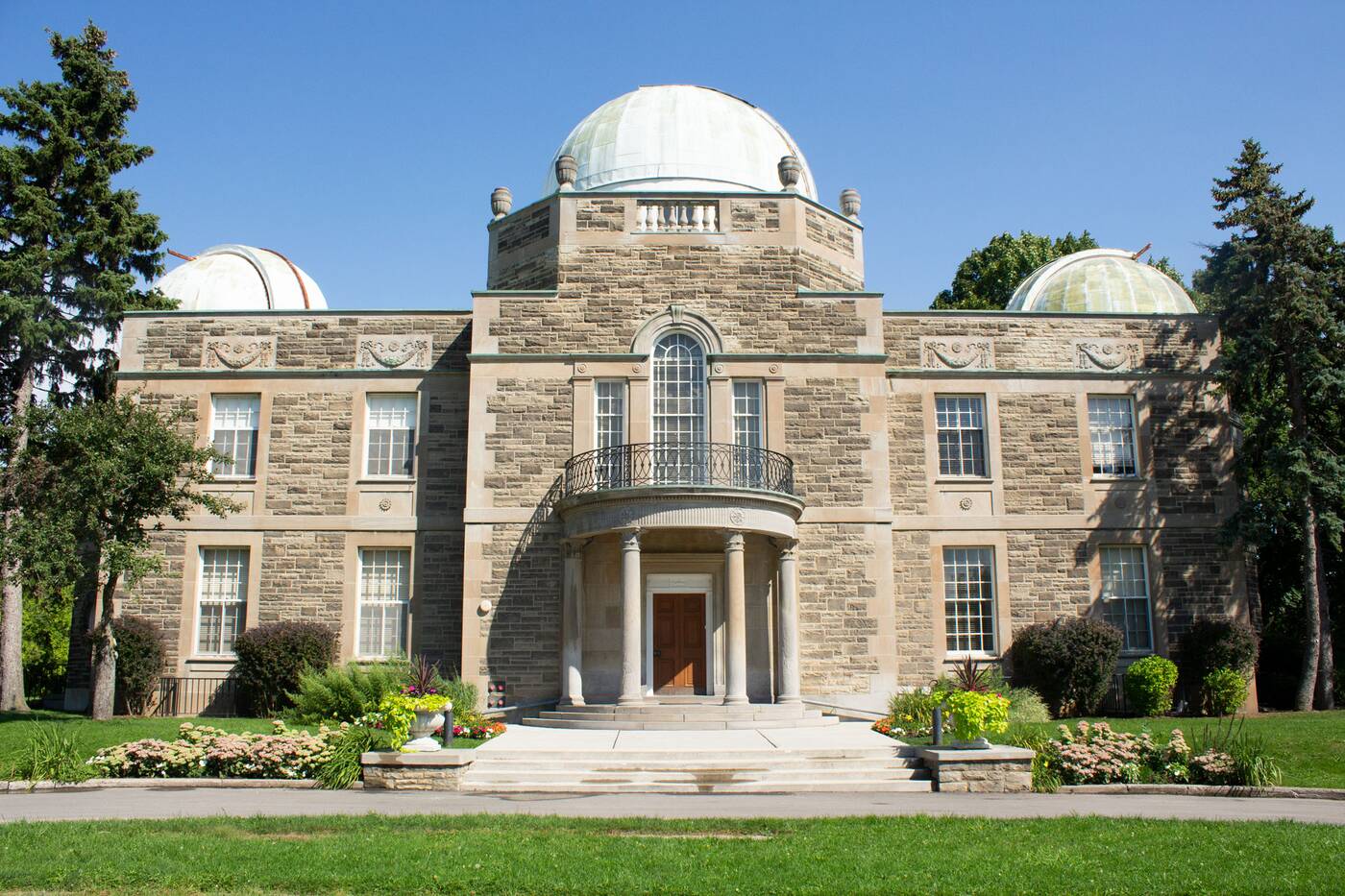 Though Dunlap died in 1924, before the David Dunlap Observatory could be realized, his widow Jessie and Chant worked together to purchase the site and erect the observatory, after which Dunlap donated it to U of T in memory of her husband.

At 1.88-metres, it was the second largest telescope in the world at the time it was built. Not only that, it was also a hub for major radio astronomy research and where first evidence was discovered that the then-mysterious x-ray source Cygnus X-1 was indeed a black hole. 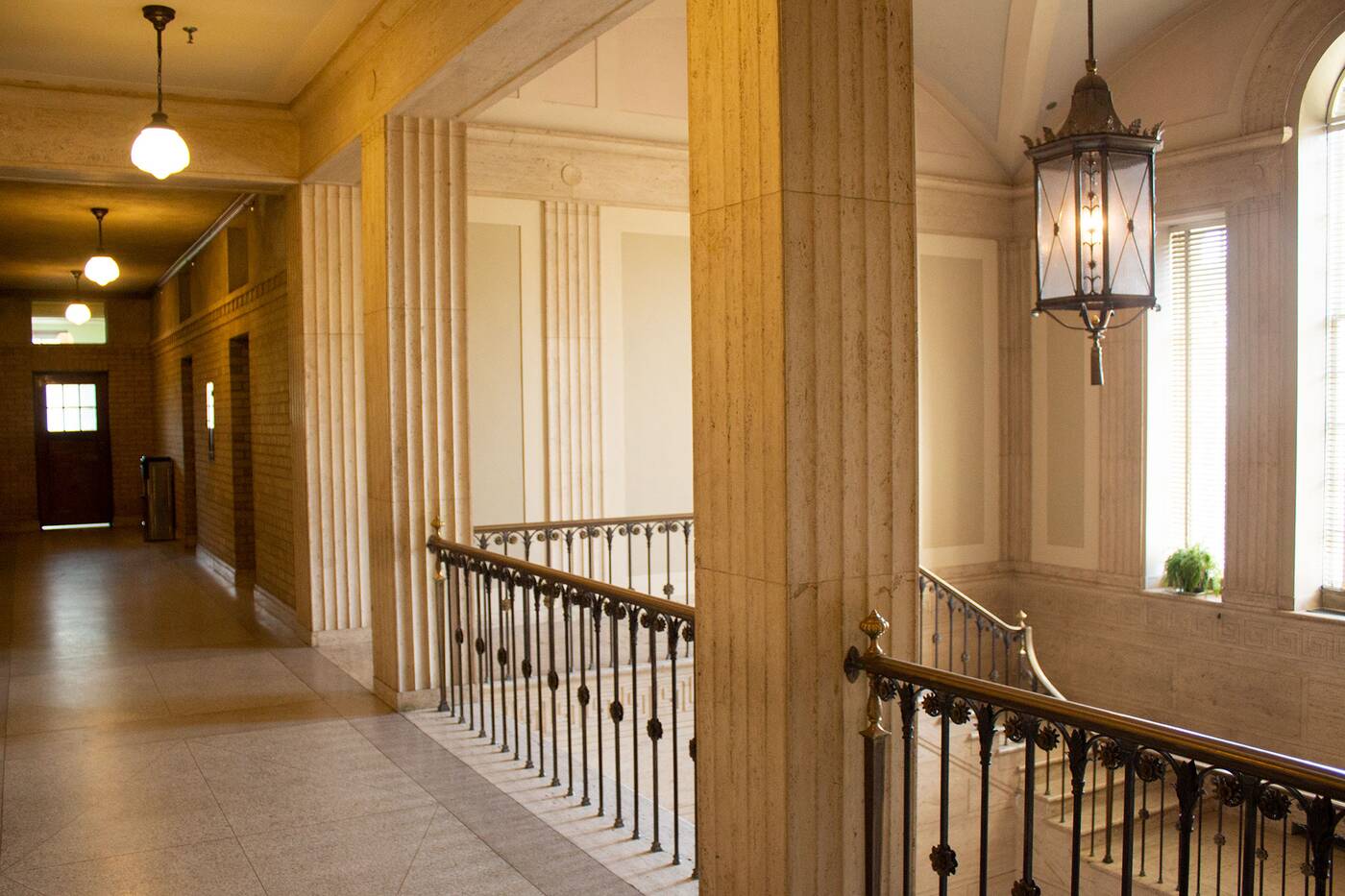 The second floor of the administration building is where weekend astronomy lectures take place today.

Today, the observatory is dwarfed by a number of cutting-edge telescopes around the world. That, along with concerns of encroaching light pollution, was one of the reasons for U of T's highly contested decision to sell the David Dunlap Observatory property to a developer for $70 million in 2008.

The ten years since that sale has been what's largely felt like a battle between the big guy, property developer Corsica, and the 'little town' of Richmond Hill, along with numerous David Dunlap Observatory and preservation advocacy groups. 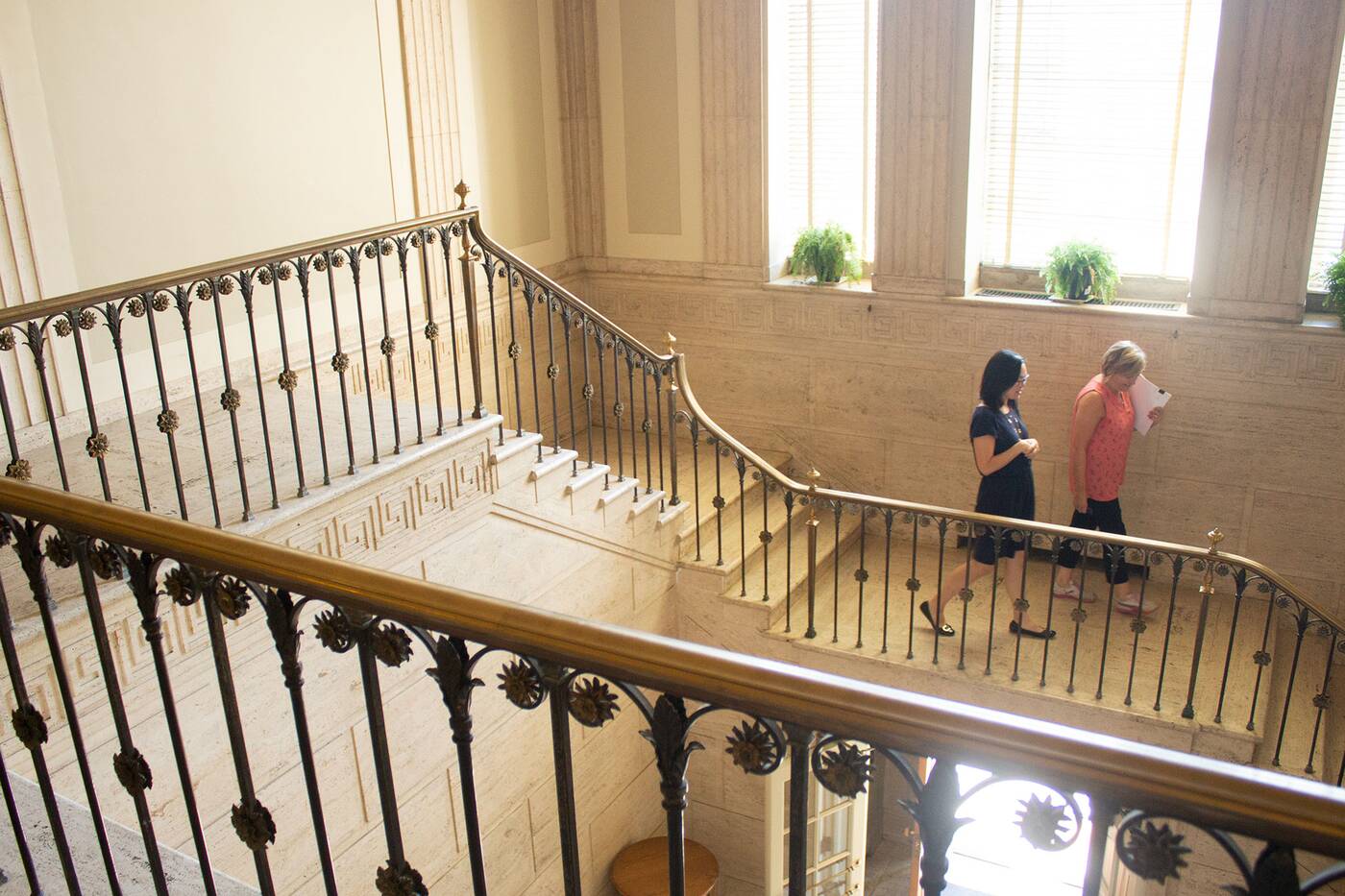 The administration building was built in the Beaux-Arts style and features ornate railings and marble.

The buildings and much of the surrounding landscape have since been designated historic property, and in 2009, the Royal Astronomical Society of Canada moved in to operate occasional educational programming from the David Dunlap Observatory.

To make a long story short, the town of Richmond Hill now owns a bit more than half of the original David Dunlap Observatory property, with the remaining land to the east currently being developed into 530 homes, hence the presence of seemingly never-ending construction nearby. 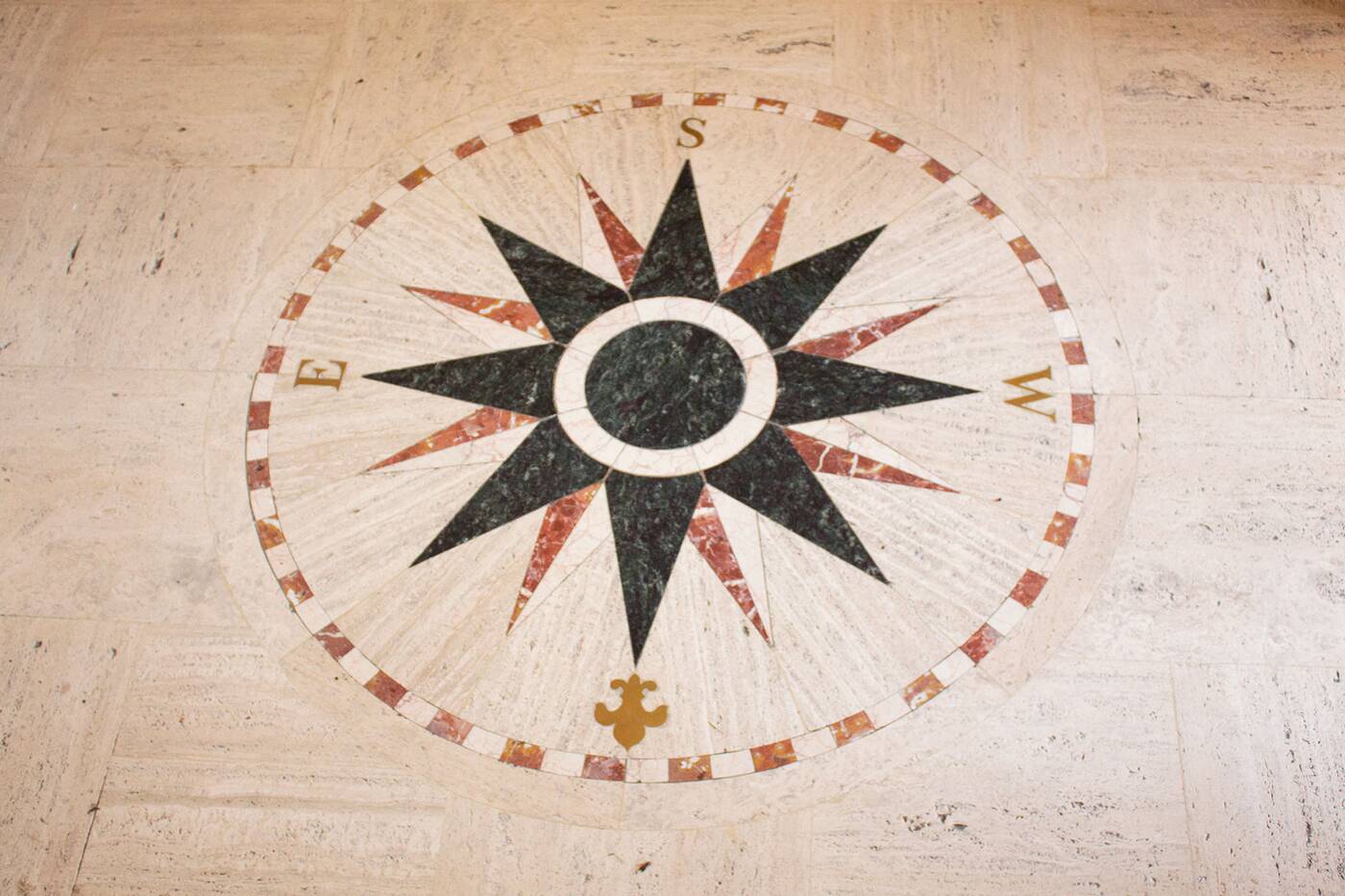 The foyer features a marble compass on the ground.

There's even a $54-million plan to turn the lands into a astronomical-themed destination park, with four tennis courts, self-illuminating pathway and amphitheatre—though we won't see those visions come to fruition for another 15 to 20 years. 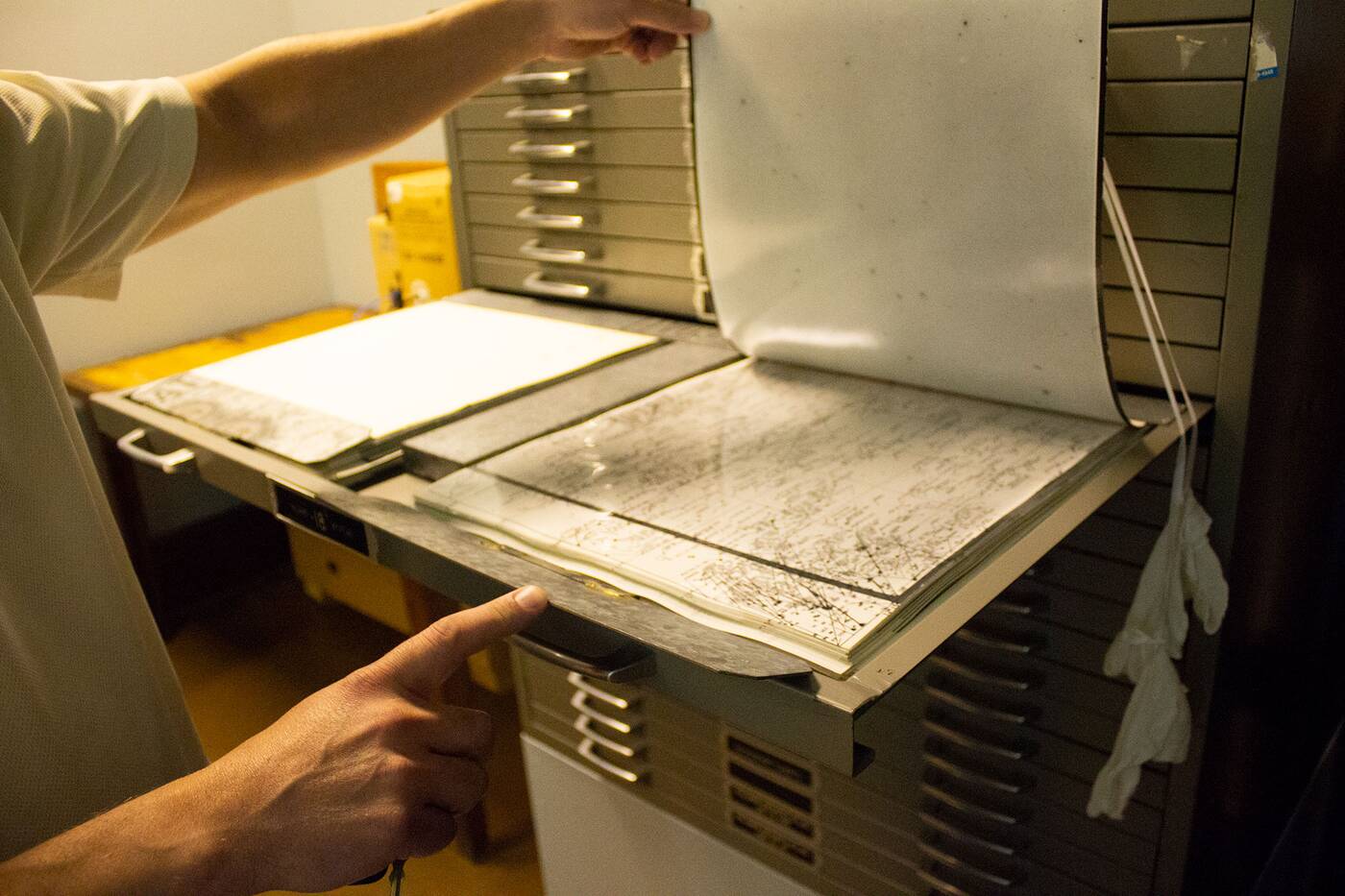 Today, the only way you can visit the inside of either the observatory or the administration buildings is through a variety of programs, mostly on weekends, offered through the Richmond Hill website.

The maker space YLab also holds evenings here in the observatory basement, where you can learn about amateur radio and make cool things like light sabres from scratch.

Hour-long historical tours on Sundays will take you through the limestone admin building, which, for Beaux-Arts admirers will be a delight with its ornate banisters, Corinthian columns and compass laid into the marble foyer. 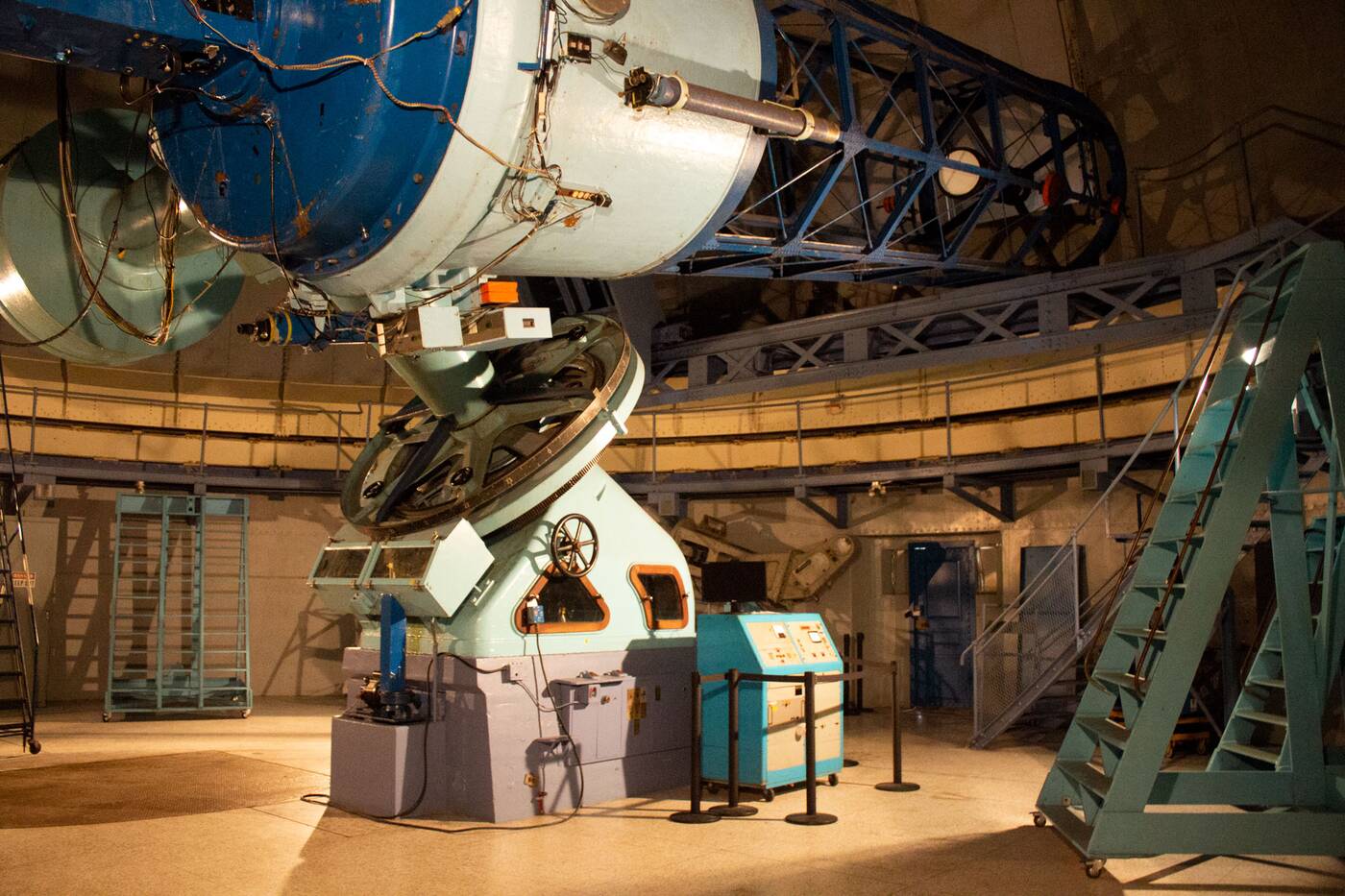 The telescope is held on the second floor of the observatory while the majority of operating equipment functions beneath it.

Lectures take place on the second floor, in rooms equipped with projectors. Meanwhile, other tours will take you into the actual observatory itself, where you'll be led upstairs (keep in mind neither buildings are accessible) to where the 74-inch telescope is.

Despite being old, the space is completely functional, full of old-timey machinery and control boards that young astronomer dreams are made of. 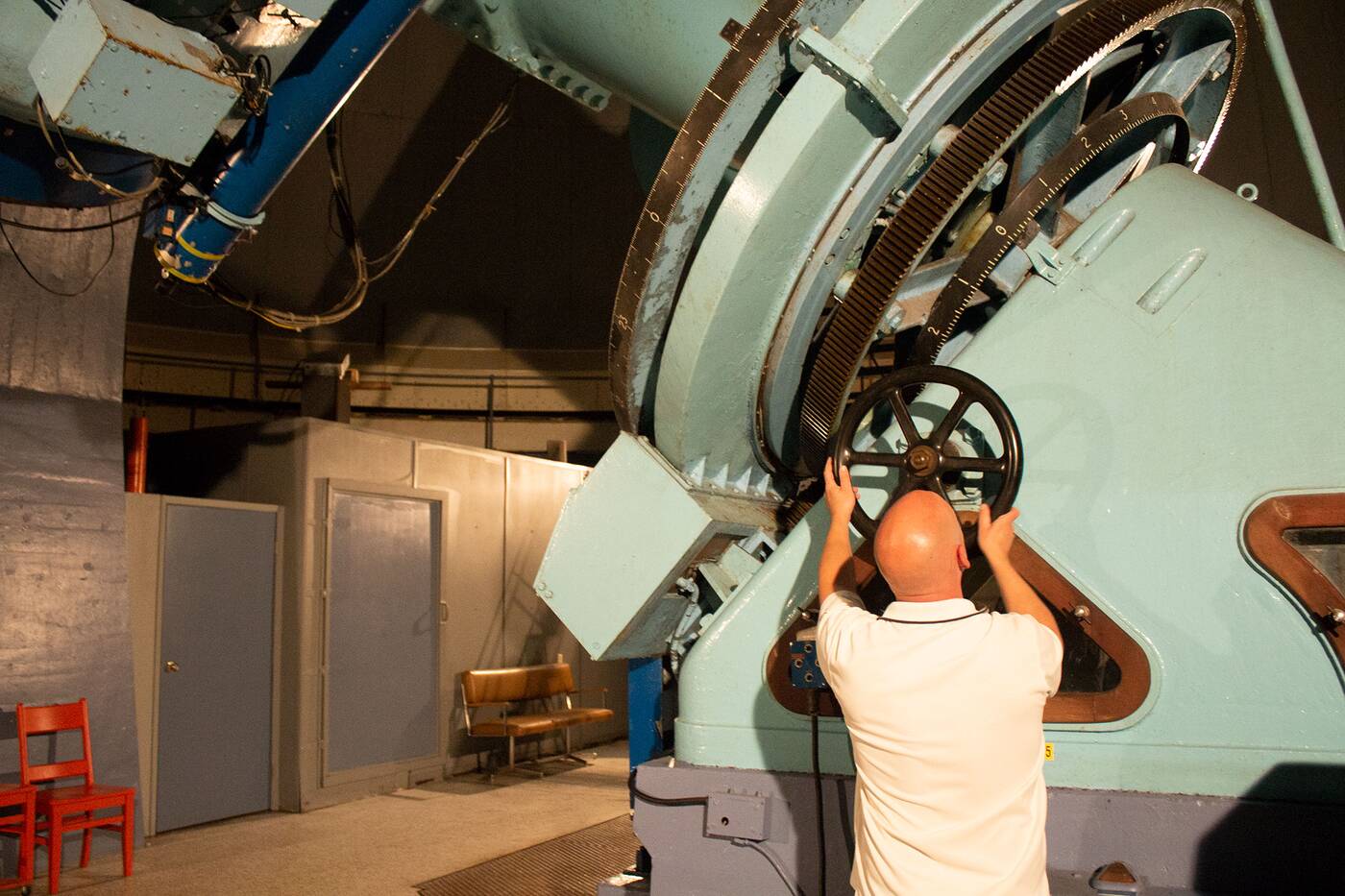 Keep in mind that if you're attempting to look through the actual telescope itself, you'll likely be disappointed. Viewing is only permitted in ideal weather conditions, not only limited by rain or clouds but also by things like dust, since any type of debris on the telescope glass can cause damage.

A guide will, however, probably be able to demonstrate rotating the telescope around via a very retro handspun wheel in an impressive display of non-automated expertise.

Some astronomy programs will also set up a number of smaller telescopes on the David Dunlap Observatory grounds at night, allowing for a viewing of the night sky that will satisfy nonetheless. 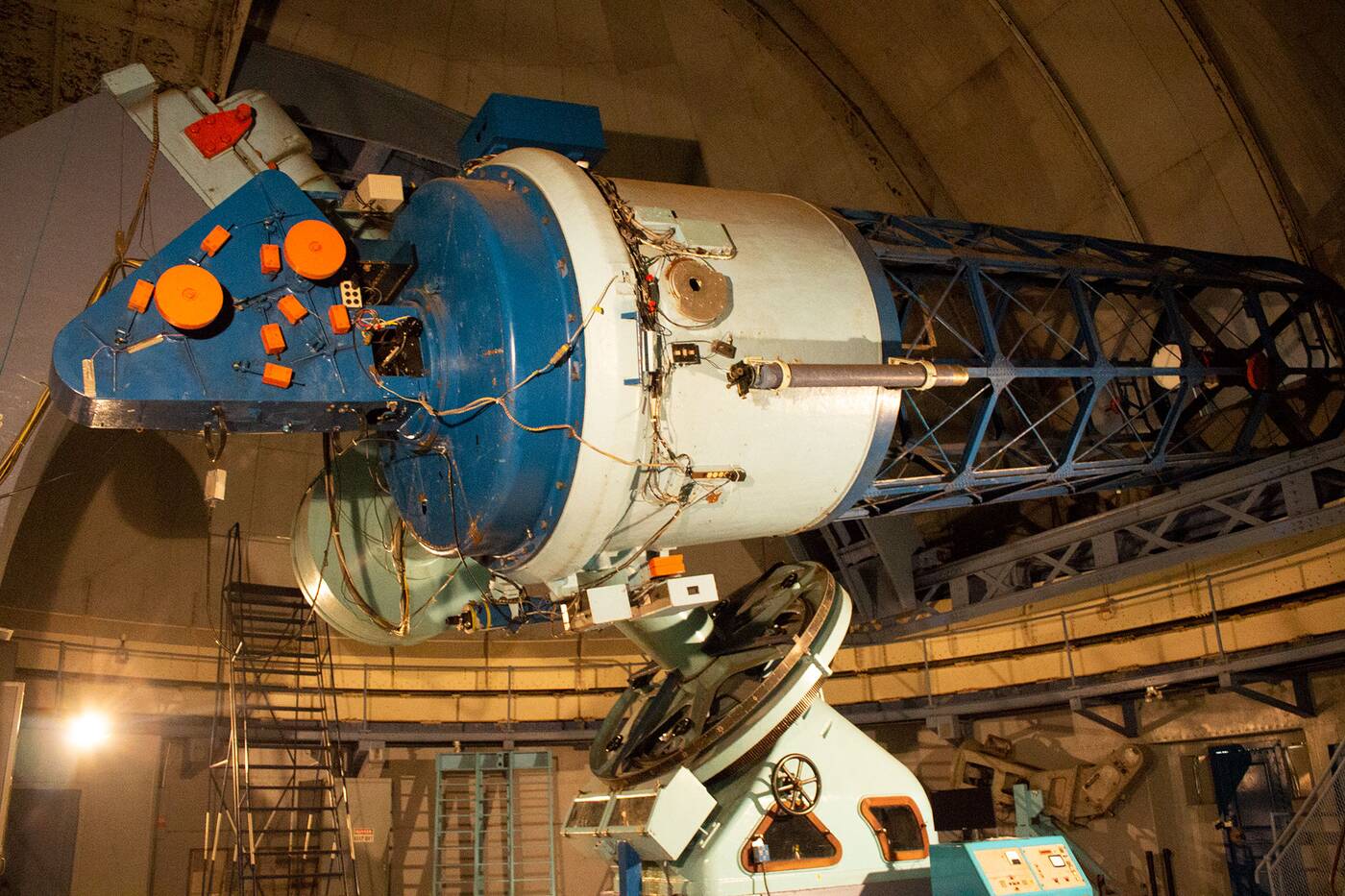