Liberty Village has a sidewalk problem

How many people and cars can you stuff into a long, narrow strip of land at the same time before everyone goes absolutely berserk?

Liberty Village is well on track to find out every day at rush hour.

Love it or hate it, the Toronto neighbourhood has exploded over the past decade, going from sprawling industrial wasteland to bustling residential and commercial enclave — a place where thousands upon thousands of yupsters come, go, work and play, clogging the streets up on the reg. 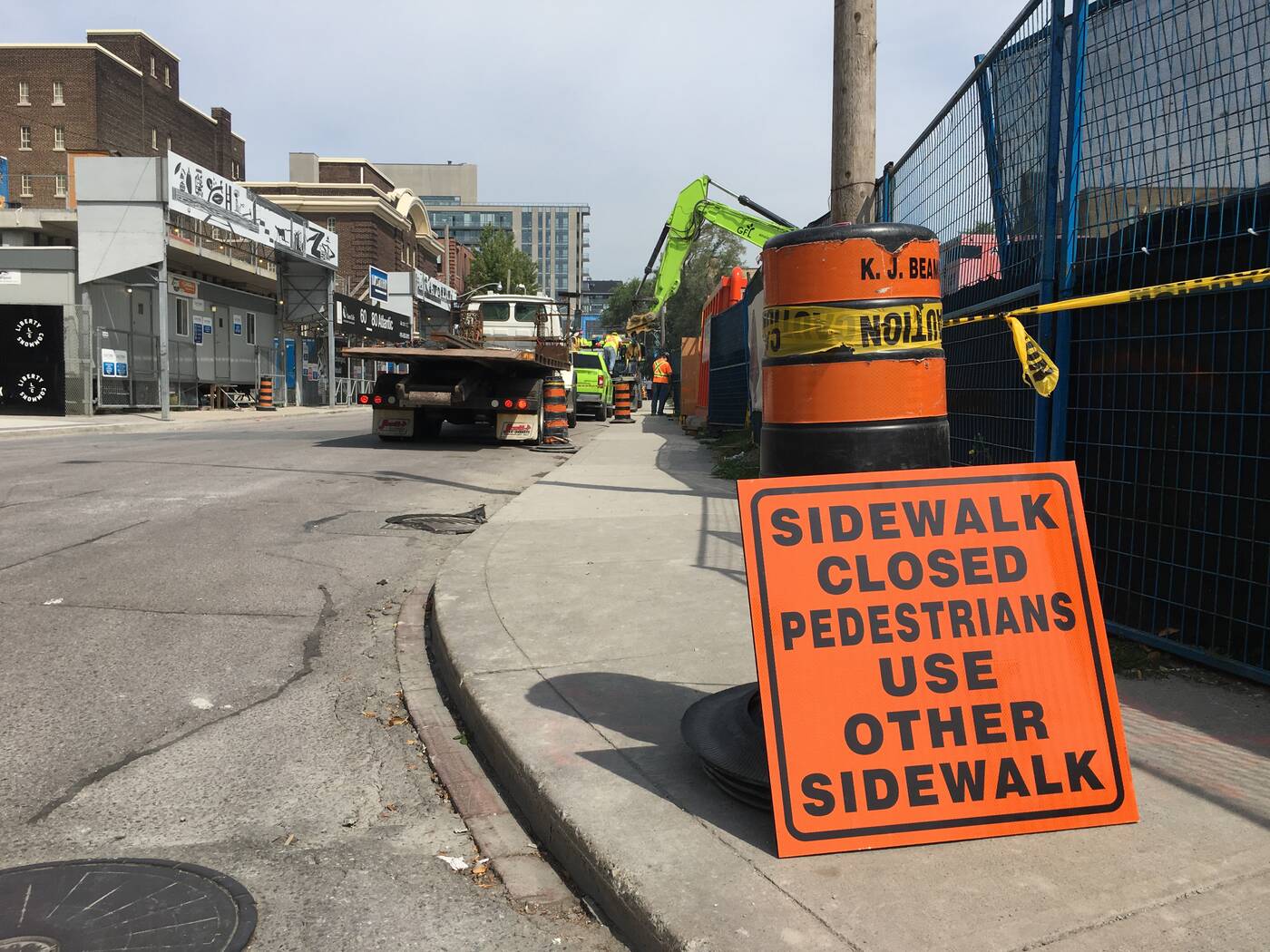 It has long been hell to drive through Liberty, with only a handful of exits that aren't blocked by train tracks, and just one viable east-west route between Dufferin and Strachan.

That route is Liberty Street: A 10.6-metre-wide, two-way collector roadway with a posted speed limit of 40 km/h.

Its current state makes a perfect case study in what happens when infrastructure can't keep up with population growth.

The lack of sidewalks on certain streets in #LibertyVillage seems like an accident waiting to happen #Toronto @JohnTory pic.twitter.com/3IEDoWwRJQ

Recent Statistics Canada census profile data shows that the population of Niagara (the official name of the neighbourhood encompassing most of Liberty Village) rose nearly 47 per cent between 2011 and 2016, to roughly 31,180 people.

That's a big hike for just five years, and much of it can be attributed to developers who keep ramming more condos in an already condo-stuffed district, as well as businesses relocating their operations to Liberty's hip old industrial buildings. 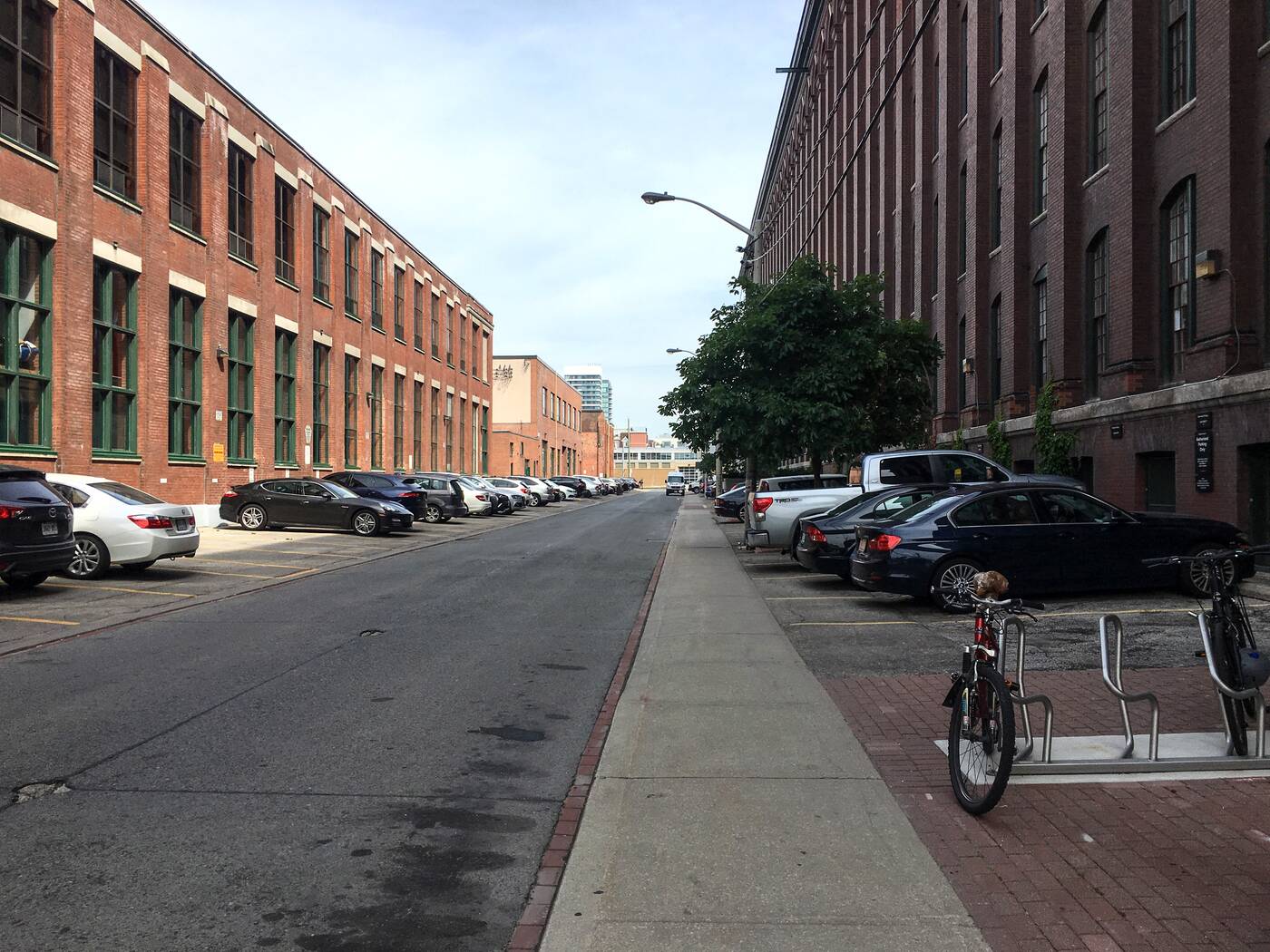 Gridlock was inevitable, in terms of car traffic, but what one might not have expected five years ago is how hard it would become just to walk through the neighbourhood as of 2018.

The sidewalks along Liberty Street — where they exist — are broken and narrow for such a highly-trafficked route, hence the presence of trampled grass, pretty much everywhere. 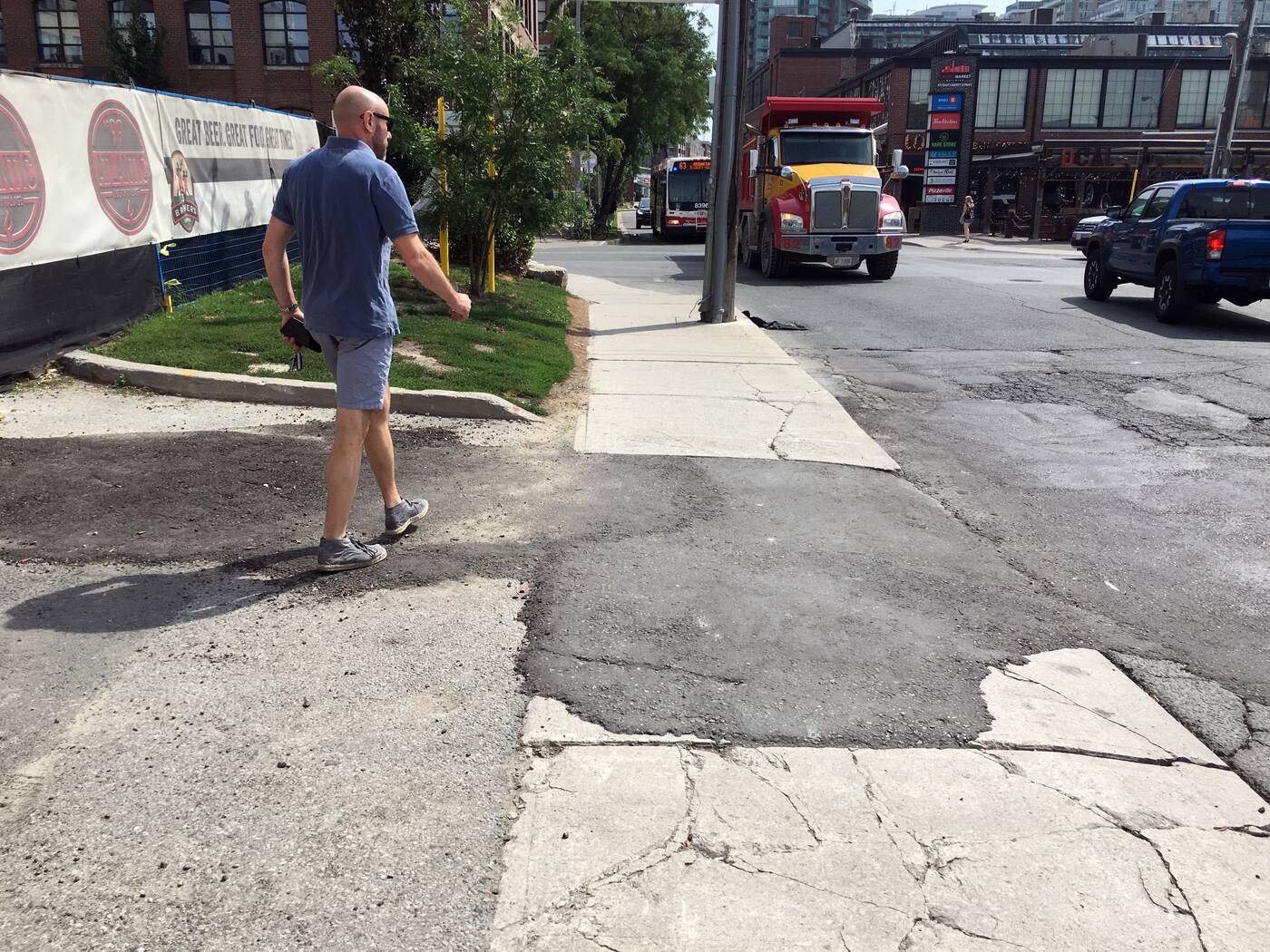 Pedestrian congestion is both annoying and dangerous when the neighbourhood is bumping, particularly on the west side of Liberty Street, closer to Dufferin, where angled parking is allowed in front of most commercial buildings. 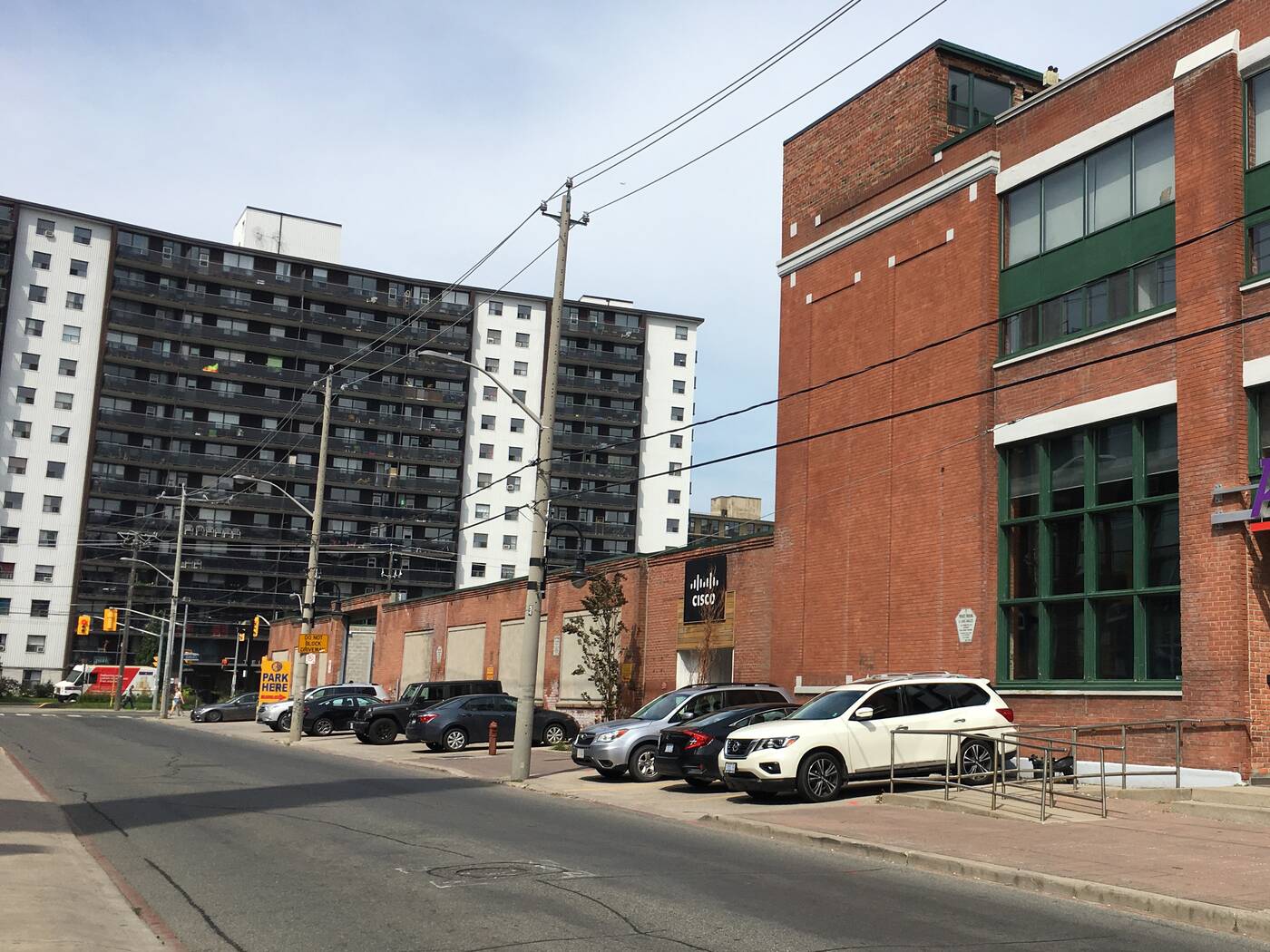 Private parking spots can be found against buildings both north and south of the arterial road, sometimes with nothing but curb running between car bumpers and the street.

People who walk this route are forced to either cross Liberty Street, which is never a picnic, or slide along the bottom of what amounts to a long, narrow parking lot as best they can. 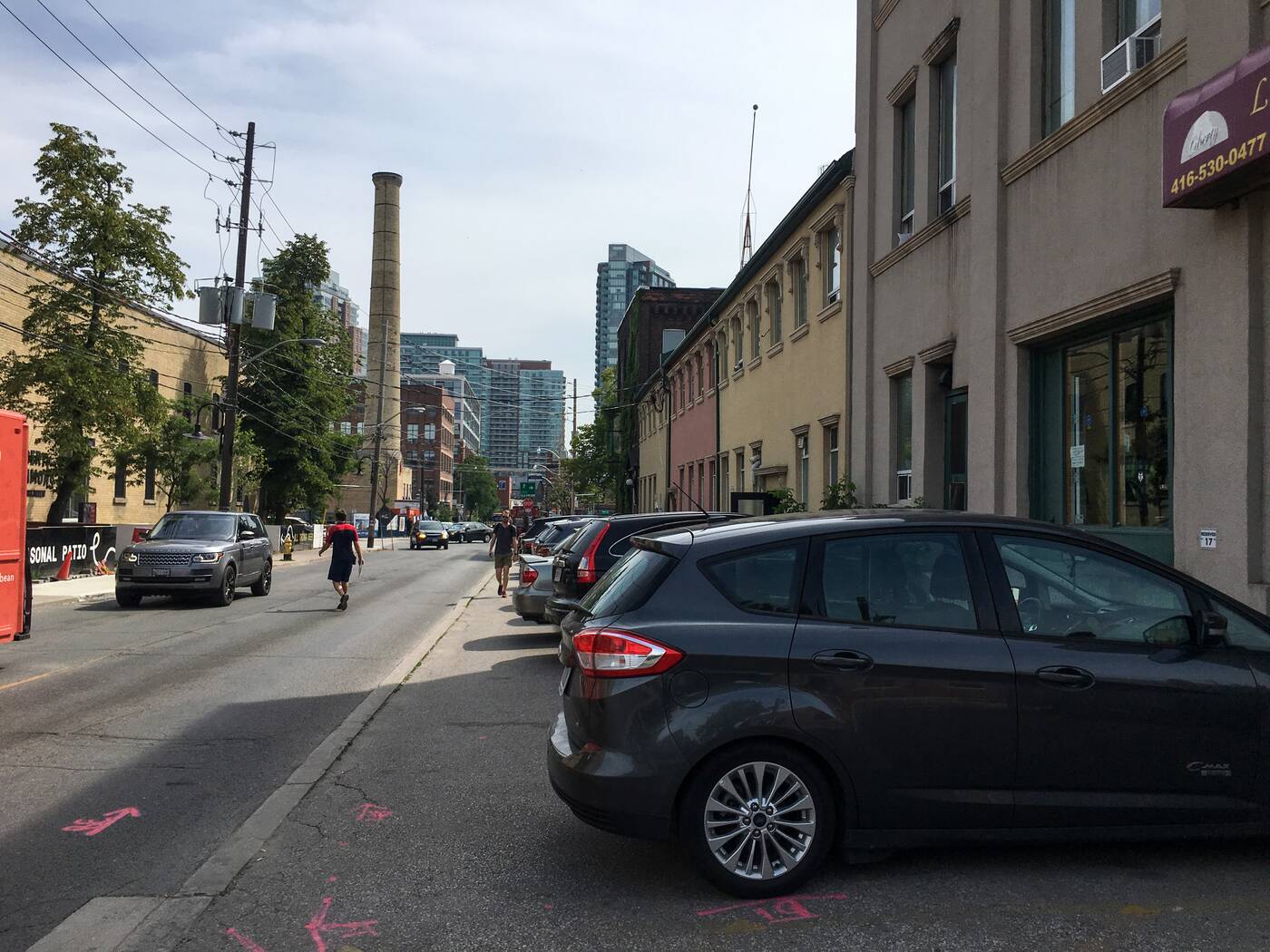 Again, not a picnic when things get busy or you're neck-and-neck with a cement truck. 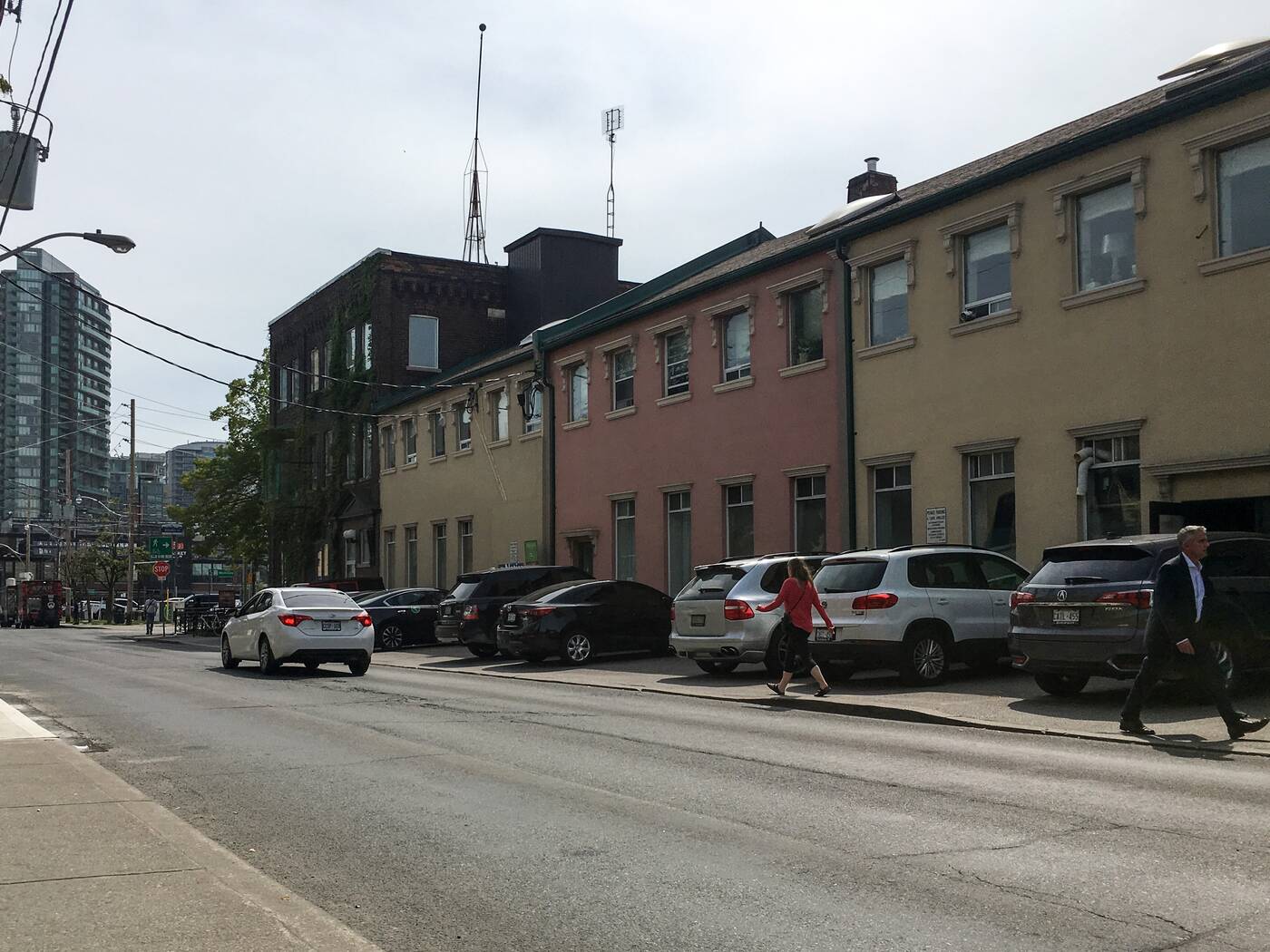 Some parts of the strip provide a wider berth for walkers, and maybe cyclists too? Nobody really knows, so it's kind of treated like a "whatever" zone by all. 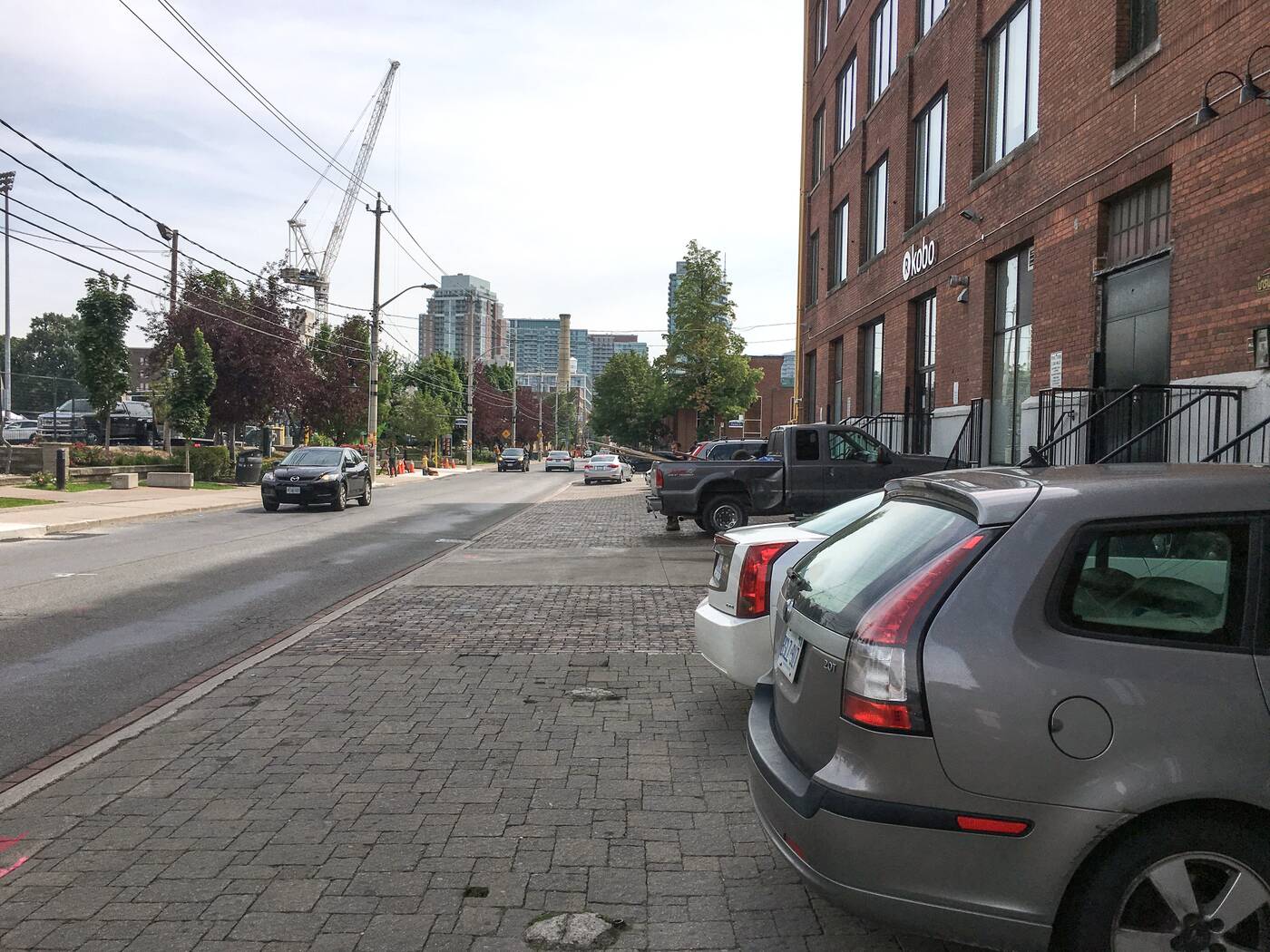 Even when there are full city sidewalks between the parking lots and street, pedestrians have to walk directly in front of vehicles (and make way from those pulling in and and out) to get where they're going.

You'd best believe that gets crazy dangerous and confusing come 5 p.m., when office execs duck out for the day. 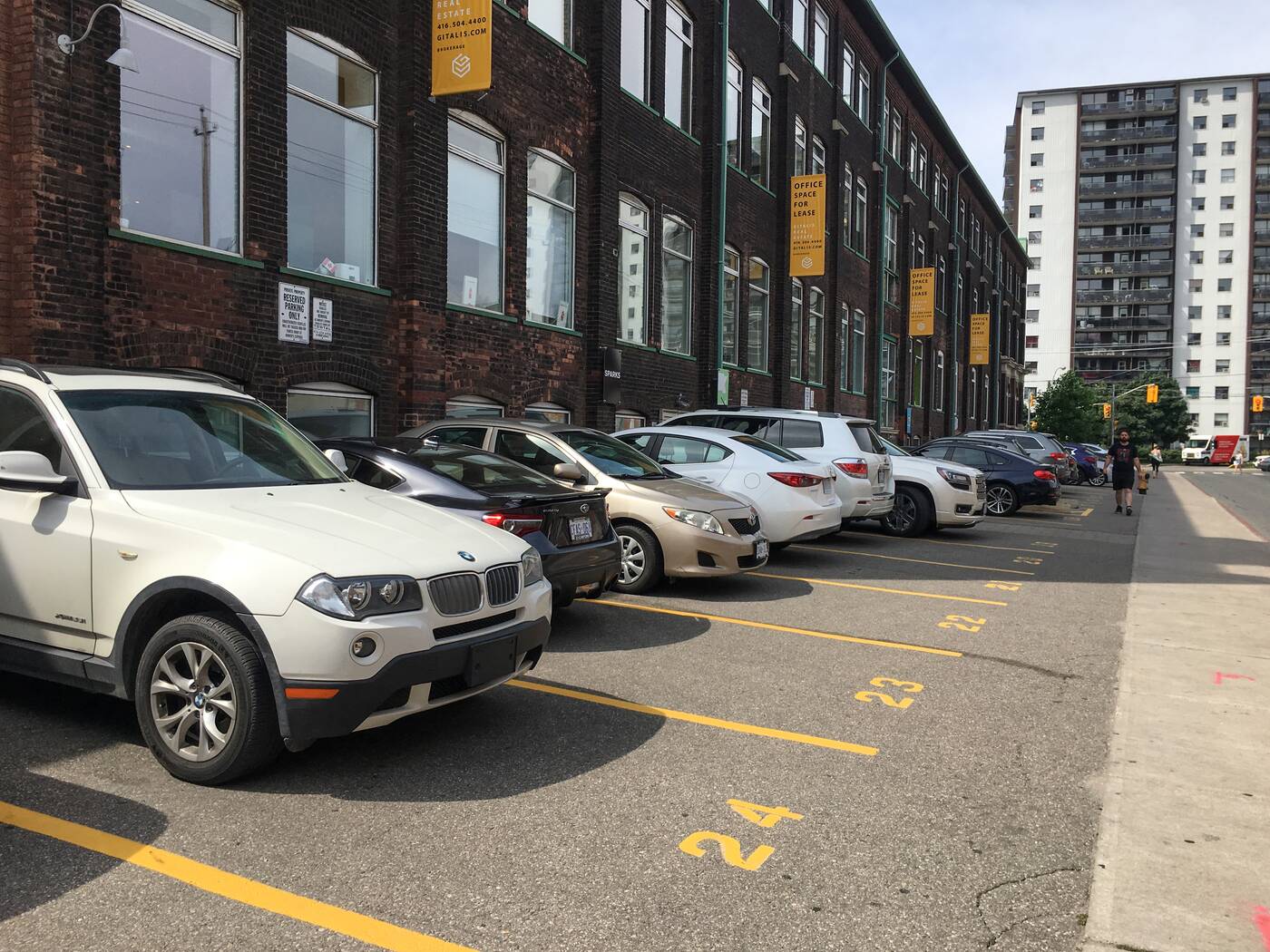 There's nothing illegal about the angled (or "boulevard") parking spots. They're just inconvenient.

Parking is fully allowed on boulevards in industrial or commercial areas "where the owner in possession or the occupant of the ground floor of property" applies for a license and displays a "suitable number of official signs."

"The owner or occupant may provide parking on so much of the boulevard or any part of it that abuts on the property," reads the Streets and Sidewalks portion of Toronto's Municipal Code, "exclusive of any portion of the street between the curb or sidewalk, for any class of vehicles specified in the licence." 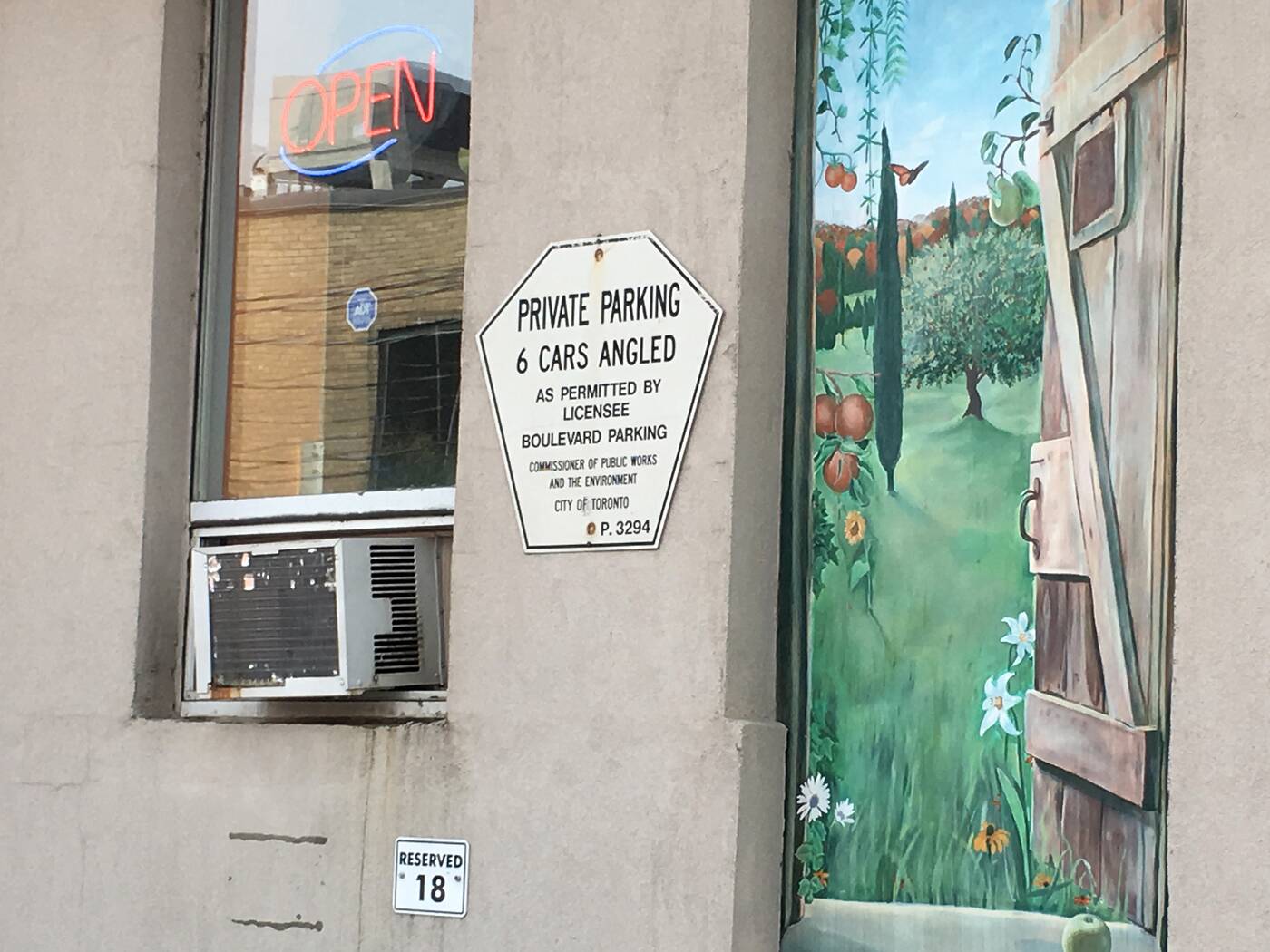 You can cross the street or take a side road, but sometimes the walk isn't very much better thanks to construction (and motorists who have the same idea). 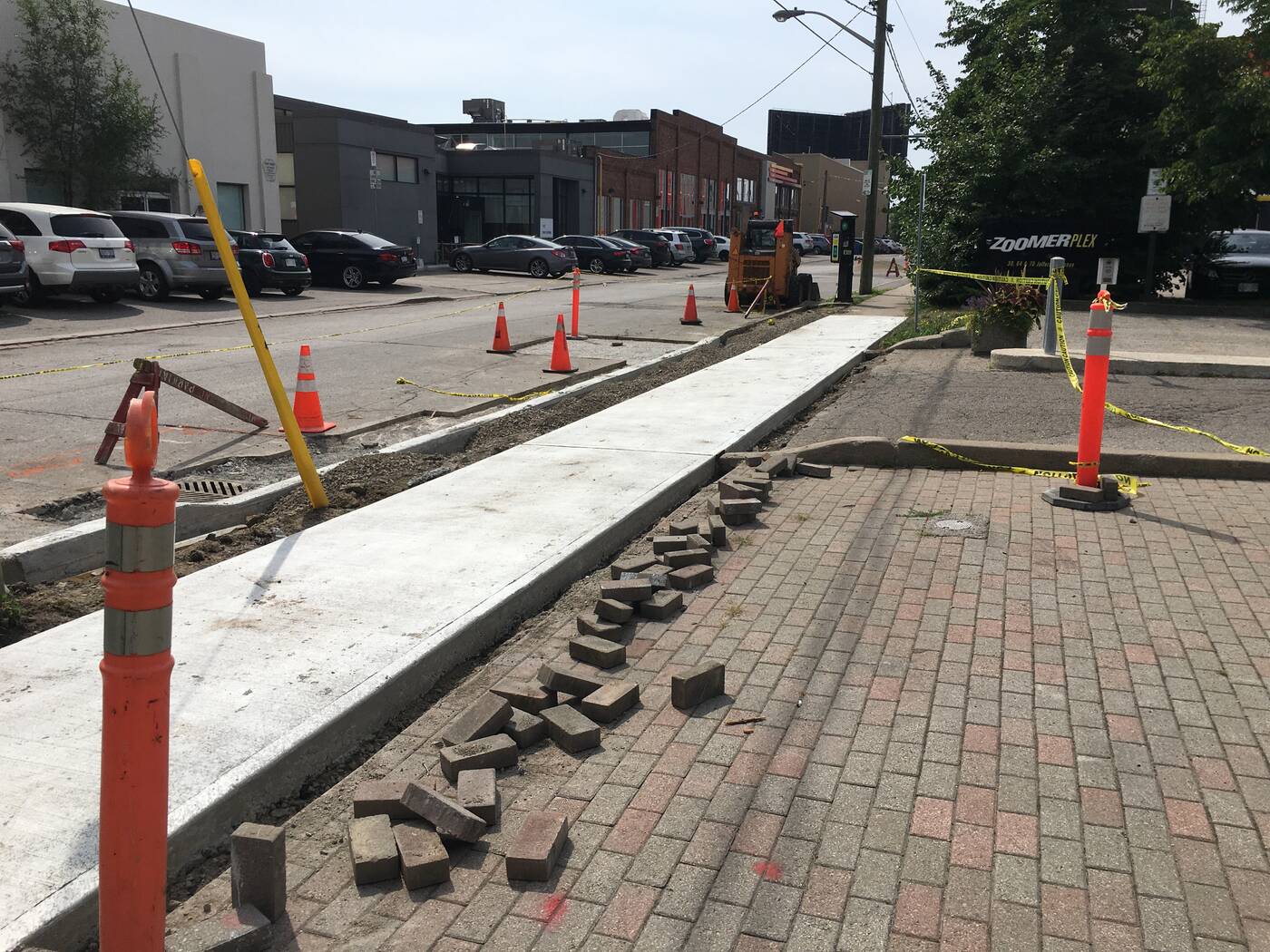 That is, if you're lucky enough to have sidewalks available at all.

On the south side of East Liberty Street, just west of Strachan, is a long strip of dirt that residents have been pounding down with their shoes for at least five years.

There's no sidewalk here, as evidenced by how muddy, icy and rocky this little dirt path gets when the weather's not fair. It's pounded down, but it's straight up mud and it's trafficked by thousands every morning and night, 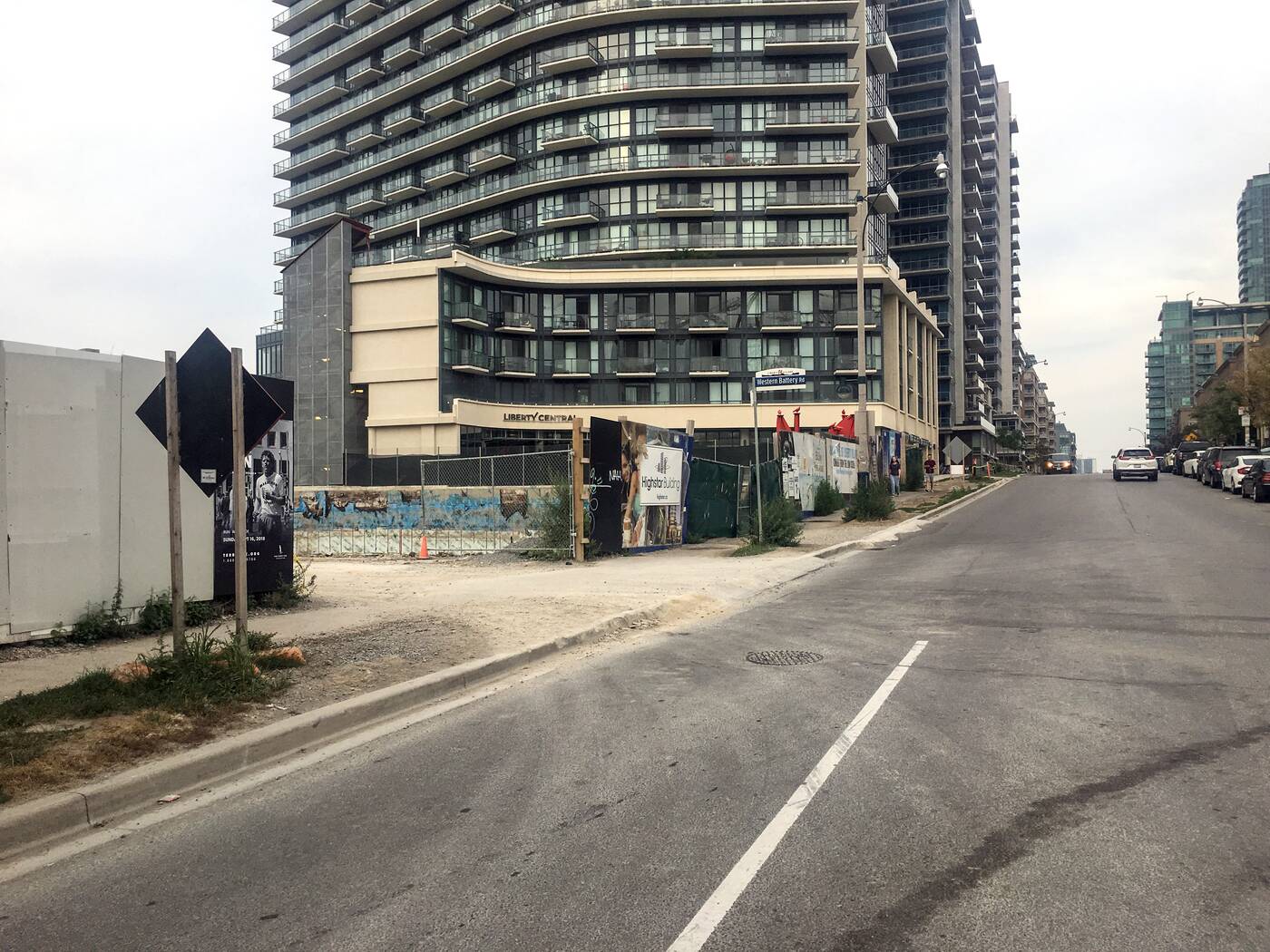 The city has taken measures to make things flow a bit more smoothly along Liberty Street, like removing street parking between Lynn Williams and Pirandello back in 2014 (though Uber drivers somehow can't seem to read the "no standing" signs).

A new relief road running along the southern edge of Liberty Village — fittingly called "Liberty New Street" has been in the works for years, but the city has yet to make it happen. 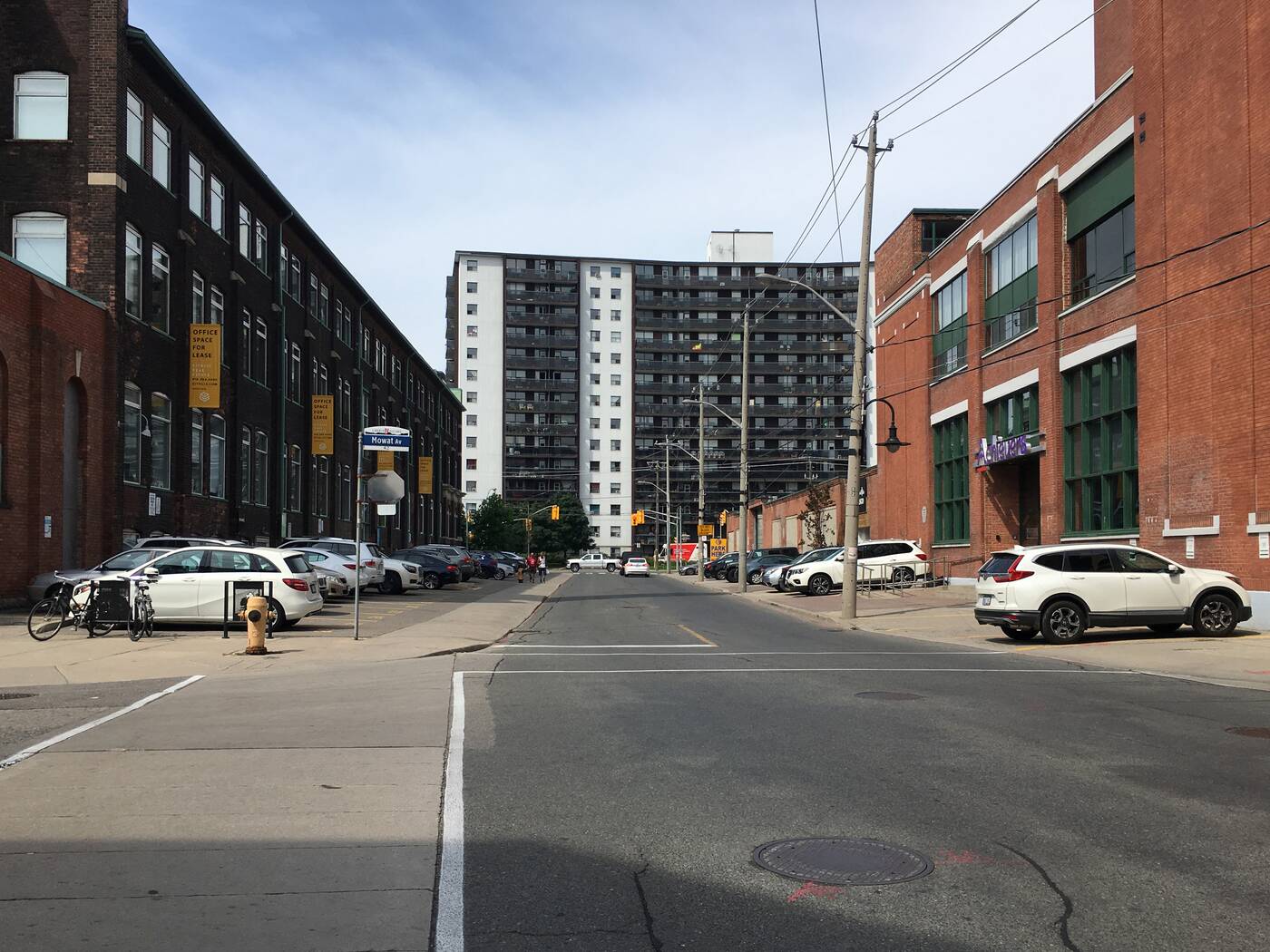 "Sidewalks are currently not provided on both sides of Liberty Street along sections between Dufferin Street and Atlantic Avenue," reads part of a Municipal Class Environmental Assessment completed for the Liberty New Street project.

"The construction of new sidewalks can serve to complete the existing discontinuous pedestrian connections but will result in a loss of existing onstreet parking spaces."

A loss of spaces for people who live in the suburbs to park their cars? Whatever is a downtown neighbourhood to do?