Doug Ford has been elected Premier by the people of Ontario — or rather, by the 40.6 per cent of the 58 per cent of eligible Ontario voters who cast a ballot in yesterday's provincial election.

With 76 ridings won, the Progressive Conservatives will now go on to form a majority government, ousting the Liberals after a solid 15 years in power.

The vote was certainly decisive in terms of numbers, but more people than not are expressing shock and anger over the results on Twitter as of Friday morning.

I don't want to hear shit from Canadians pretending they're not as bad as the US ever again. Ontario voted in a drug dealer who swindled his brother's widow and kids and had no economic plan until a week before the election cuz he promised you $1 beers. Fuck all of you.

This would suggest that either Ford Nation bangers don't go online as much as Ford Nation haters, that people are more likely to use the internet for complaining than congratulating, or that Twitter users aren't exactly representative of the province's populace. 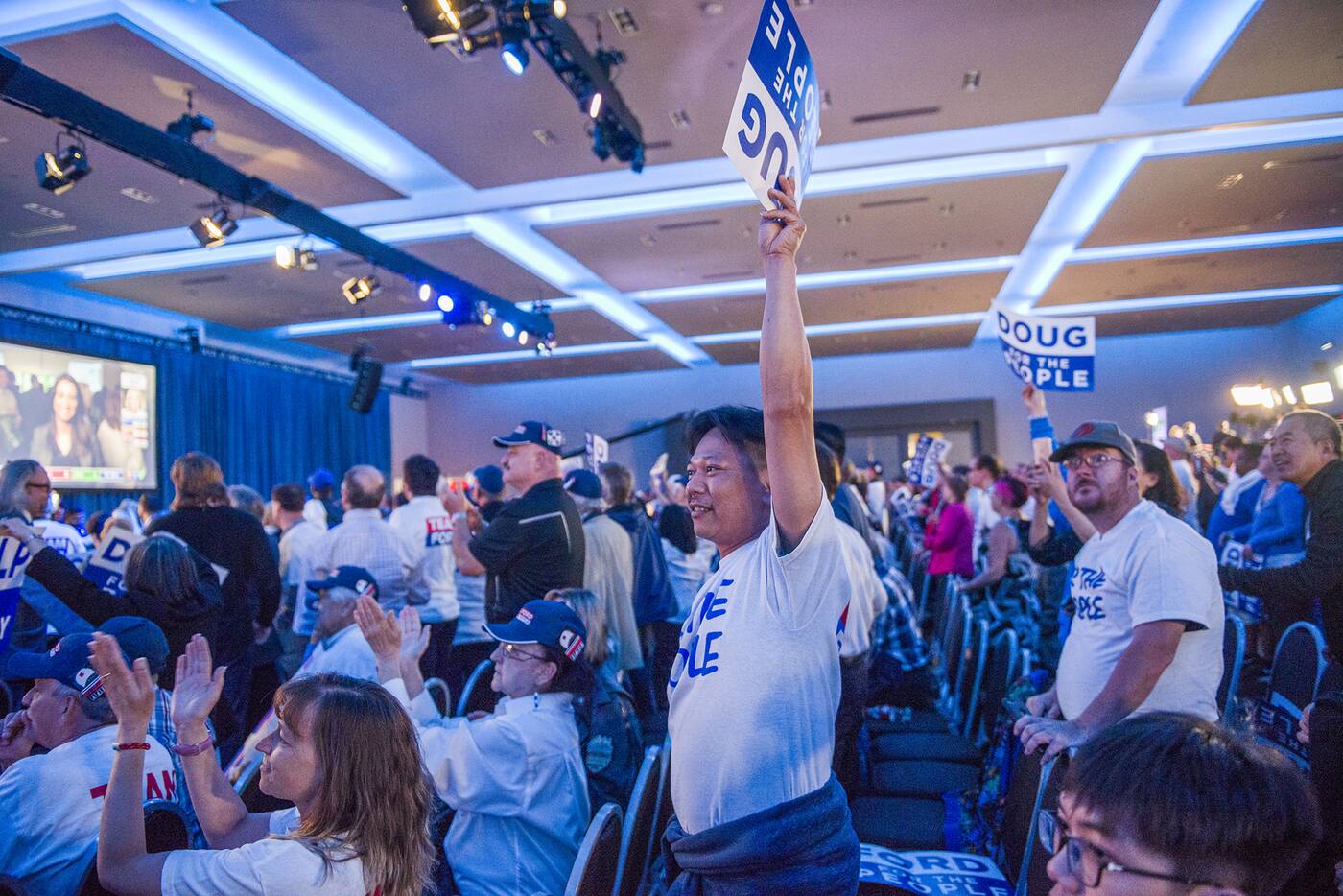 Whatever the case, tons of people are publicly lamenting Ford's landslide win right now — and a lot of them are from Toronto, where the premier-elect's younger brother once very famously served as ("crack-smoking") mayor.

This is quite the headline on @NBCNews homepage #OnPoli pic.twitter.com/gVctsHk63a

Doug Ford's 2018 provincial election win is bringing up memories of Rob Ford's 2010 mayoral win for many, and they're not entirely fond ones.

i remember when rob ford won and i was shocked, like the world had tilted on its axis, and then trump won and i couldn’t understand how, and now that a new ford has won again, i feel almost nothing, because to be surprised at this point would mean you’re not paying attention.

Doug Ford’s election is yet another reminder that we can never underestimate the power of mildly inconvenienced white men in large numbers.

Different as though they might actually be, similarities between these two wealthy businessmen-turned-politicians have not gone unnoticed.

congrats to doug ford the first ontario premier to have blocked me on twitter.

Some are already predicting that Ford and Trump will get along famously if and when they meet IRL.

When Doug Ford and the Trump administration link up. pic.twitter.com/rwXA2yLVFQ

Jokes about our premier-elect's... colourful past also abound online this morning.

And so Doug Ford fulfills his destiny by taking charge of what will become the largest weed-distribution operation in the country. #OnElxn #OnPoli

But it's not all fun and games. Far from it.

City councillors and community leaders are expressing serious concerns over what a Ford premiership will mean for the people of Toronto.

"Make no mistake, Doug Ford's election is a disaster for Toronto," said Trinity-Spadina councillor Joe Cressy Thursday night. "Whether on public transit, affordable housing or harm reduction services, his agenda is bad news for the residents of Toronto."

"However, we've seen a Ford victory before, and we fought back," he continued. "It's time to fight again."

Toronto Mayor John Tory reacted diplomatically to the news, as did Prime Minister Justin Trudeau, who congratulated Ford and wrote that he is "looking forward to working together to create jobs and opportunity."

My statement on the Ontario election results. #ONpoli pic.twitter.com/PCKa8jmNdm

Those in support of Ford are obviously pleased with the outcome of 2018's Ontario election.

for years the smug media elites, from @TorontoStar to @CANADALAND treated Doug Ford like he was trailer park trash and unworthy of high office.
Tonight, he's the Premier of Ontario pic.twitter.com/dJkSBhdwBa

There just don't appear to be as many of them in Toronto as in the rest of the GTA.

between this and king west on a friday night, 905ers deserve to be expelled

The Greater Toronto Area played a huge role in vaulting Ford's PCs over the top, according to analysts.

"In the Greater Toronto Area, a ring of communities around the city running from Durham in the east to Halton in the west, the PCs gained 23 seats and 13 points," explained CBC poll analyst Éric Grenier. 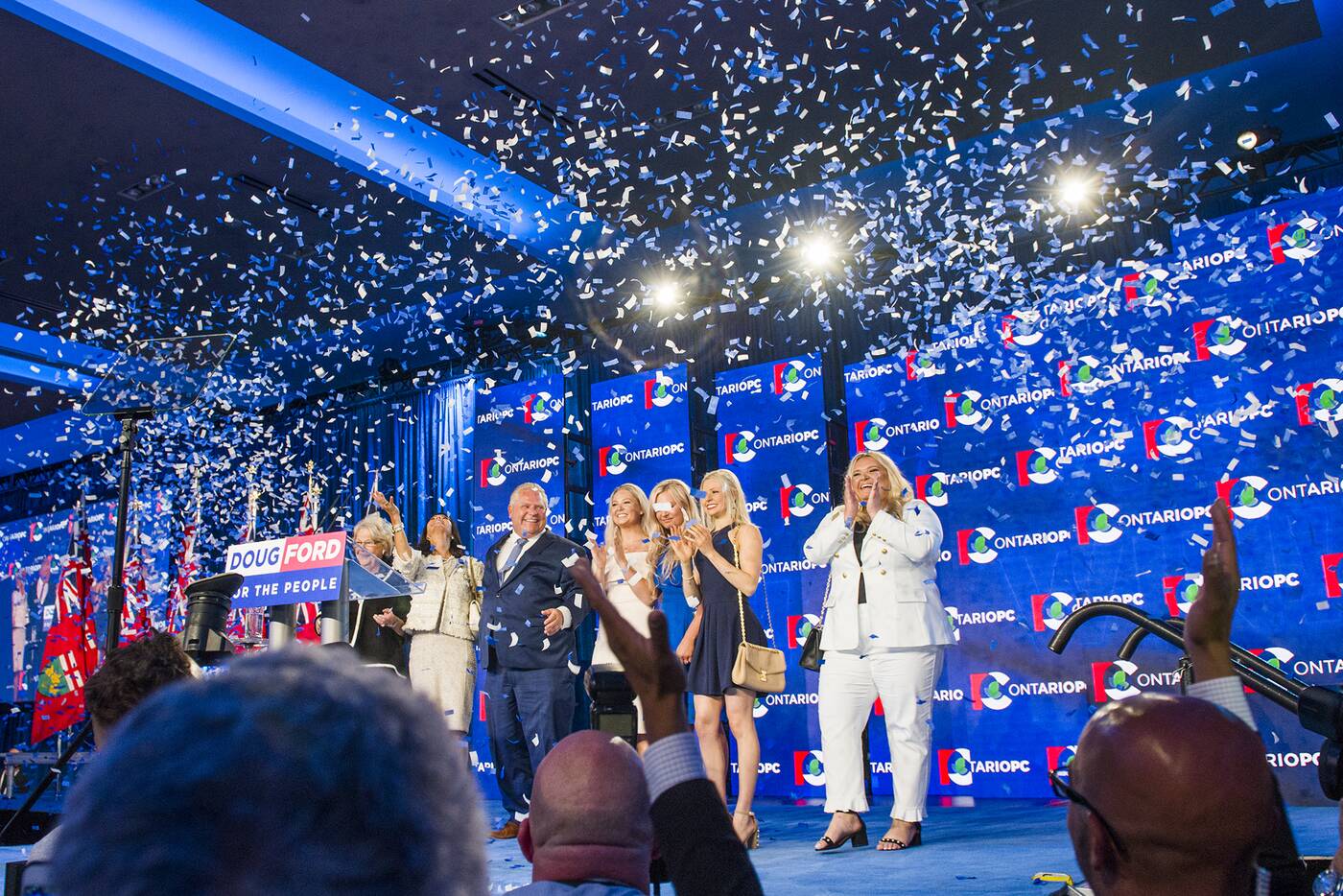 Doug Ford celebrates his 2018 election win with family on stage at the Toronto Congress Centre. Photo by Hector Vasquez.

"The party picked up eight seats in the rest of the province, half of them in eastern Ontario," he continued.

"But those wins weren't needed — the seat gains in Toronto and the GTA were more than enough to secure a majority government."