It's easy to take the CN Tower for granted when living in Toronto. Thanks to its soaring height, it's become a fixture in our peripheral vision, peeking into the frame of so many views of the city.

It's also the most relied upon directional marker, serving as the best way to orient yourself when temporarily lost. But while the upper features of the tower, most notably its two pods, have become ingrained in our consciousness, it was quite a different story during construction.

For a few years in the 1970s, the tower was a downright awkward addition to the skyline, soaring like a concrete monolith above the mostly undeveloped skyline of a city just starting to go through a huge growth spurt.

Construction on the CN Tower began on February 6, 1973 — 45 years before the writing of this post. And while an ingenious construction method using poured concrete meant that the lower half of the tower shot up rather quickly, it wasn't until June 26, 1976 that it officially opened.

Between these two historic dates, people who lived in Toronto were treated to one of the most remarkable construction projects ever undertaken. The world's tallest structure (at the time) steadily rose above the city, and nothing's been the same since.

Behold, what the CN Tower looked like as it was built. 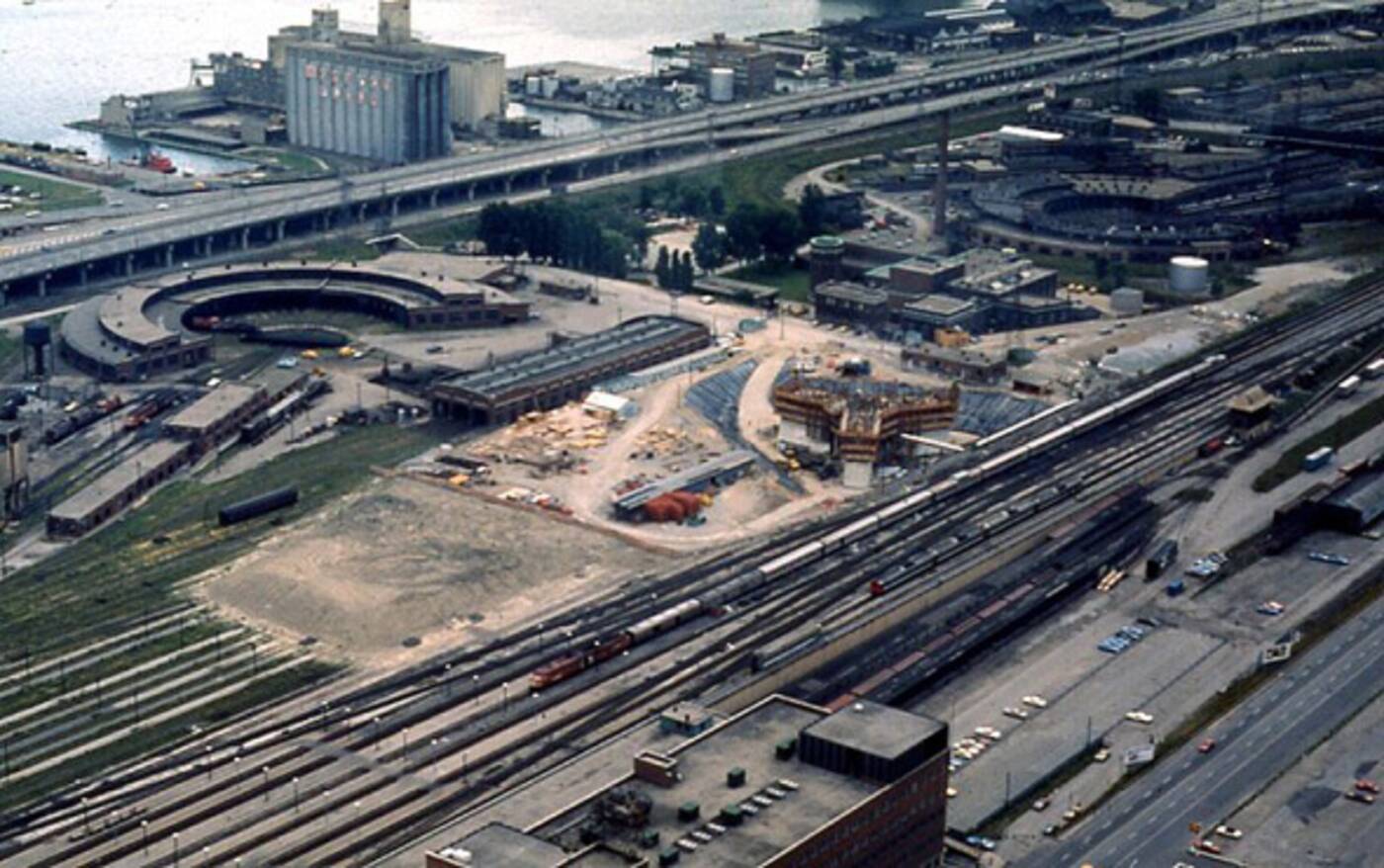 The humble beginnings of the tower in 1973 when the sprawling Railway Lands took up much of the land south of Front St. 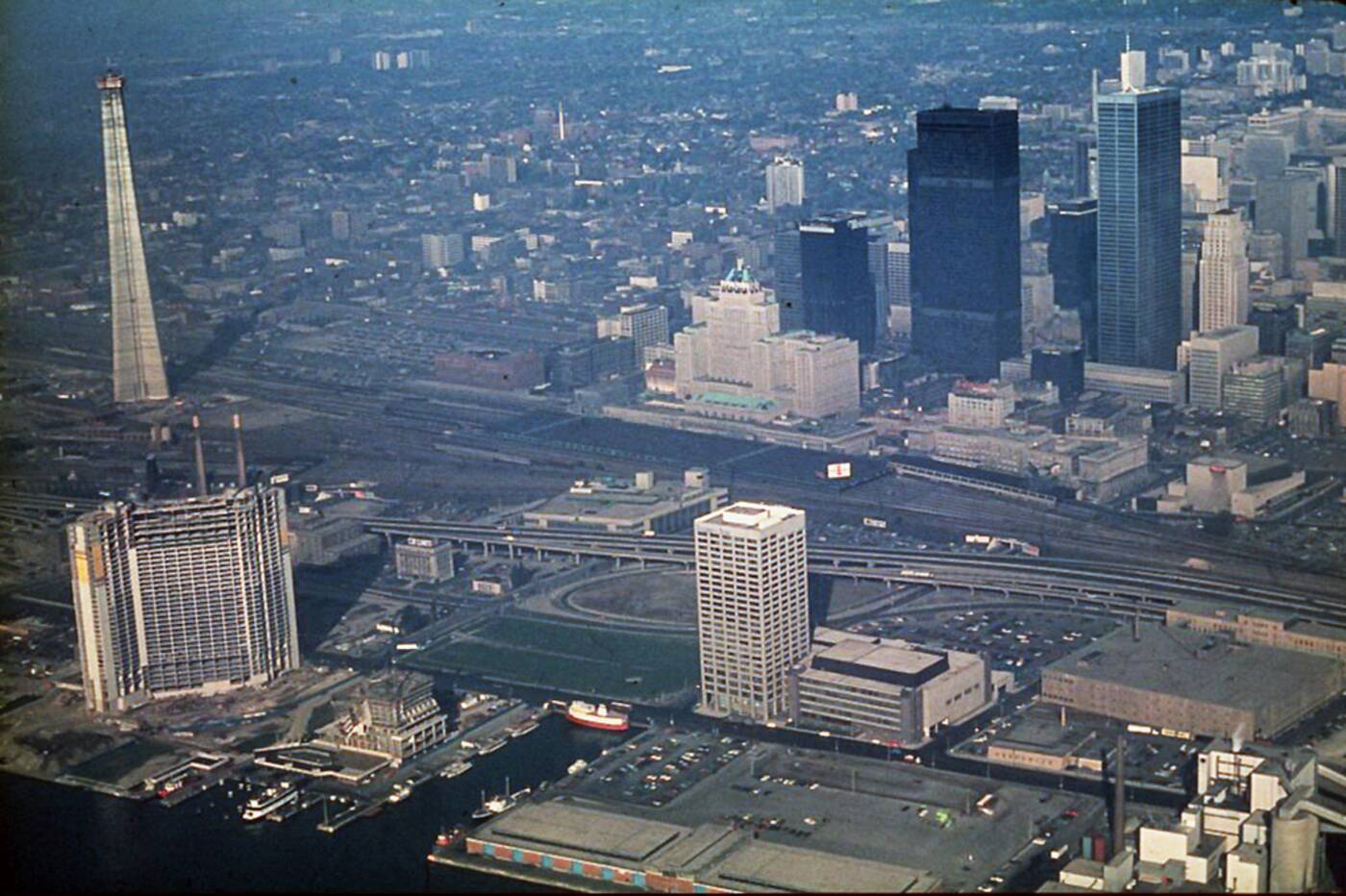 By late summer in 1973 the bottom portion of the tower was already the tallest structure in the city. 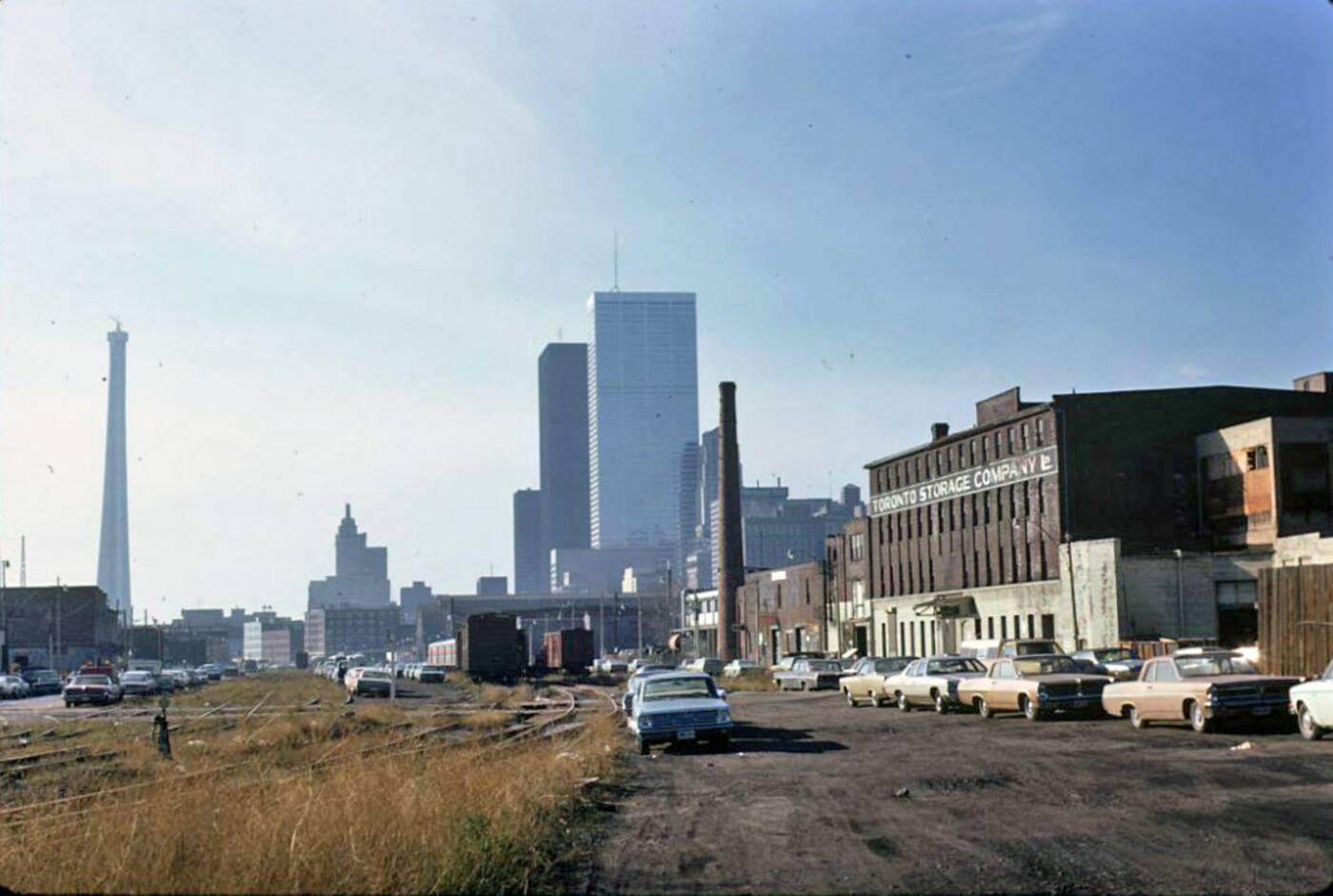 The rising tower surely looked strange as it tapered off before the main pod was constructed. 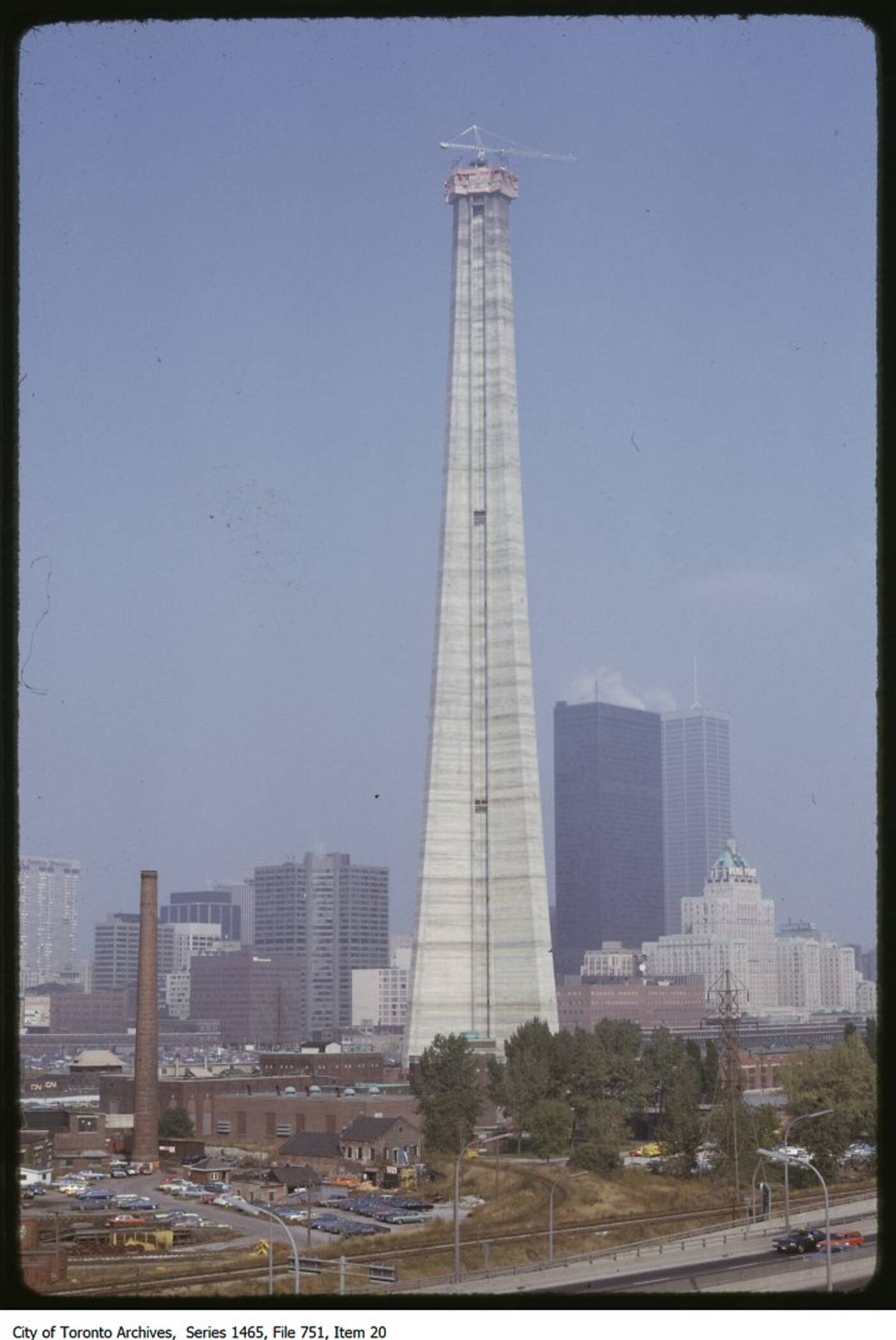 A closer look at the bottom portion of the tower in 1972. For a sense of scale, just look at the smoke stack beside it. 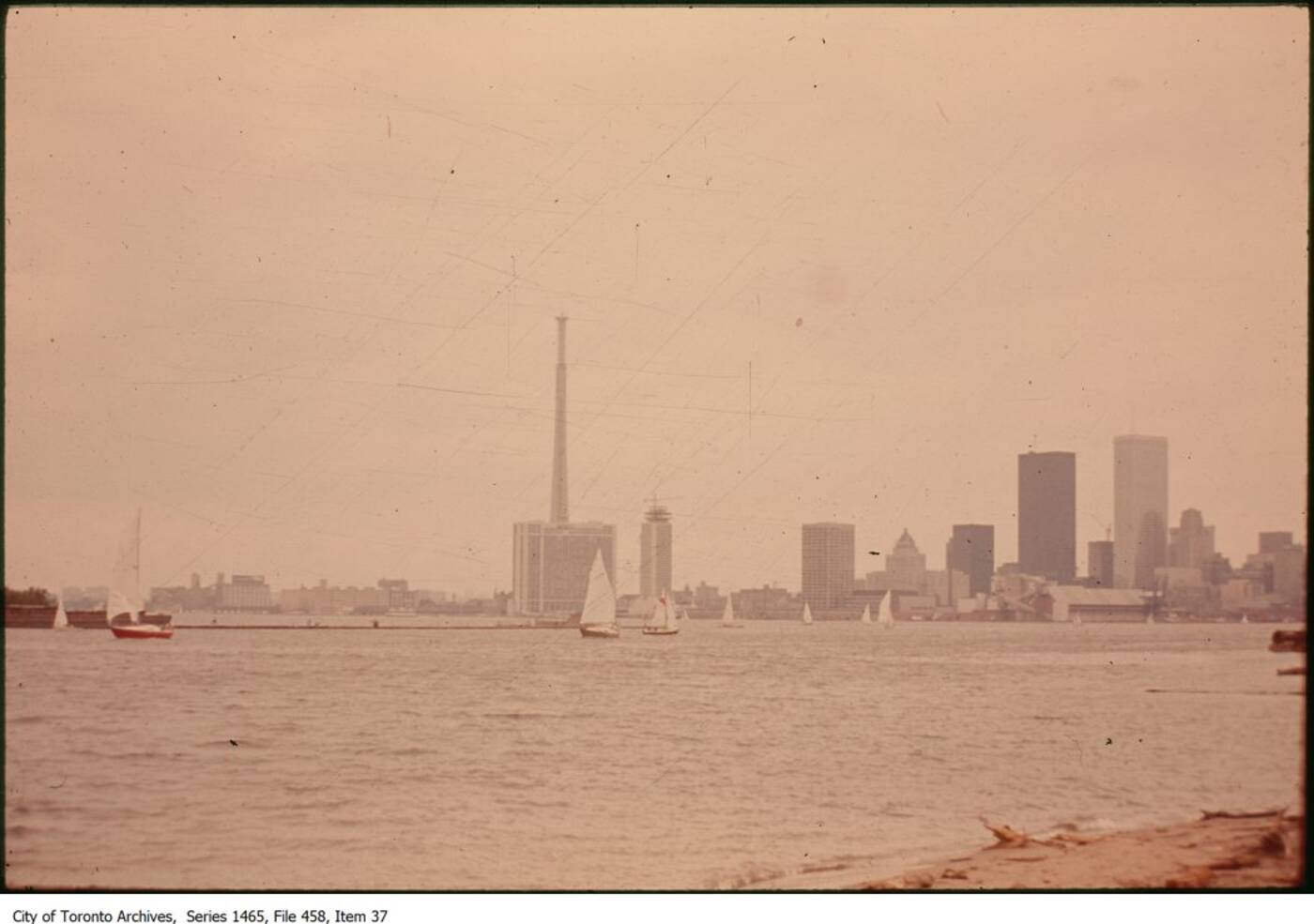 Zooming out, it's easy to see how the tower has dwarfed the rest of the skyline by late summer 1974. 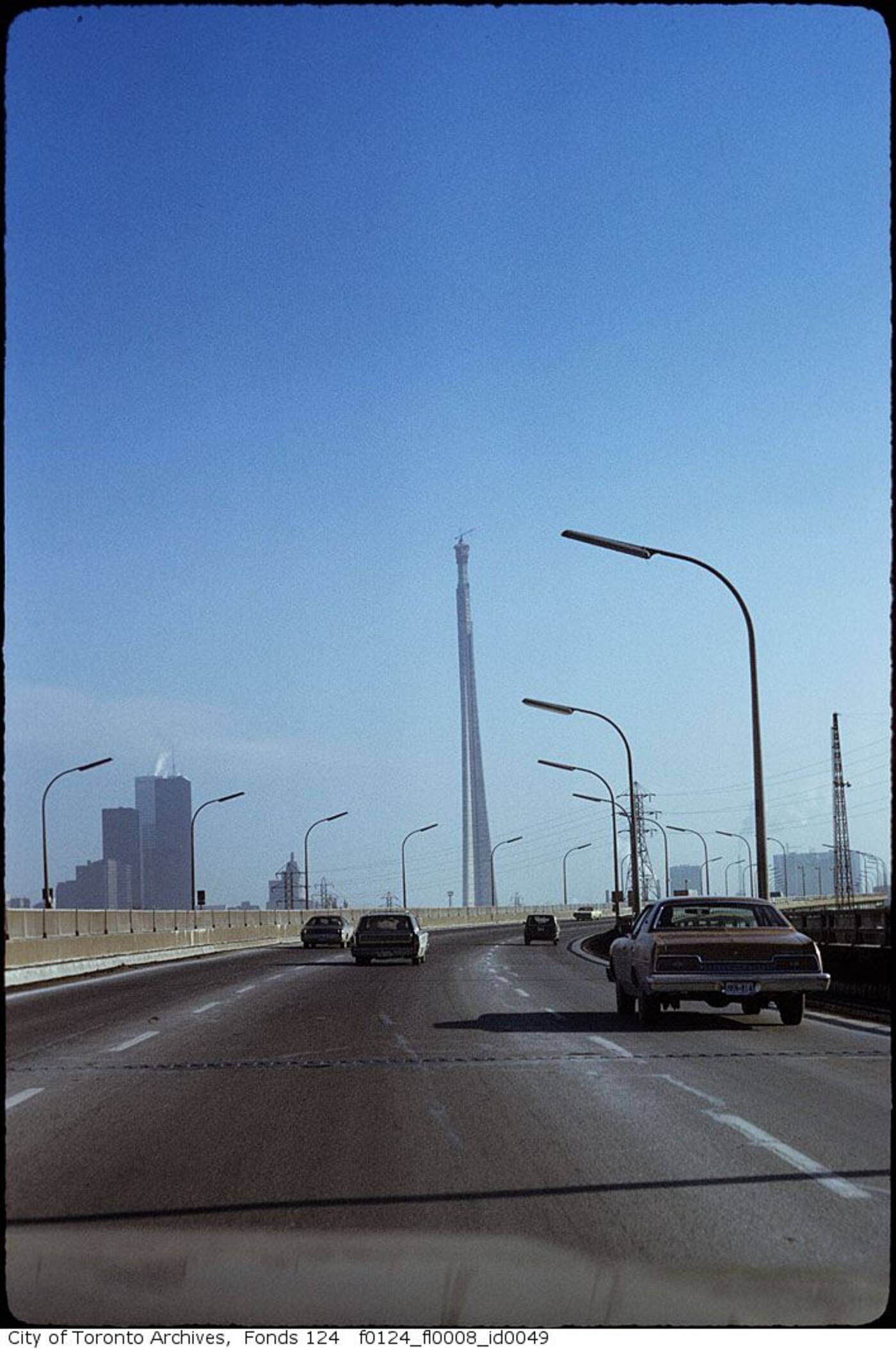 One of my favourite photos of Toronto in the 1970s. Cars shuttle across a near-empty Gardiner Expressway in winter 1974. 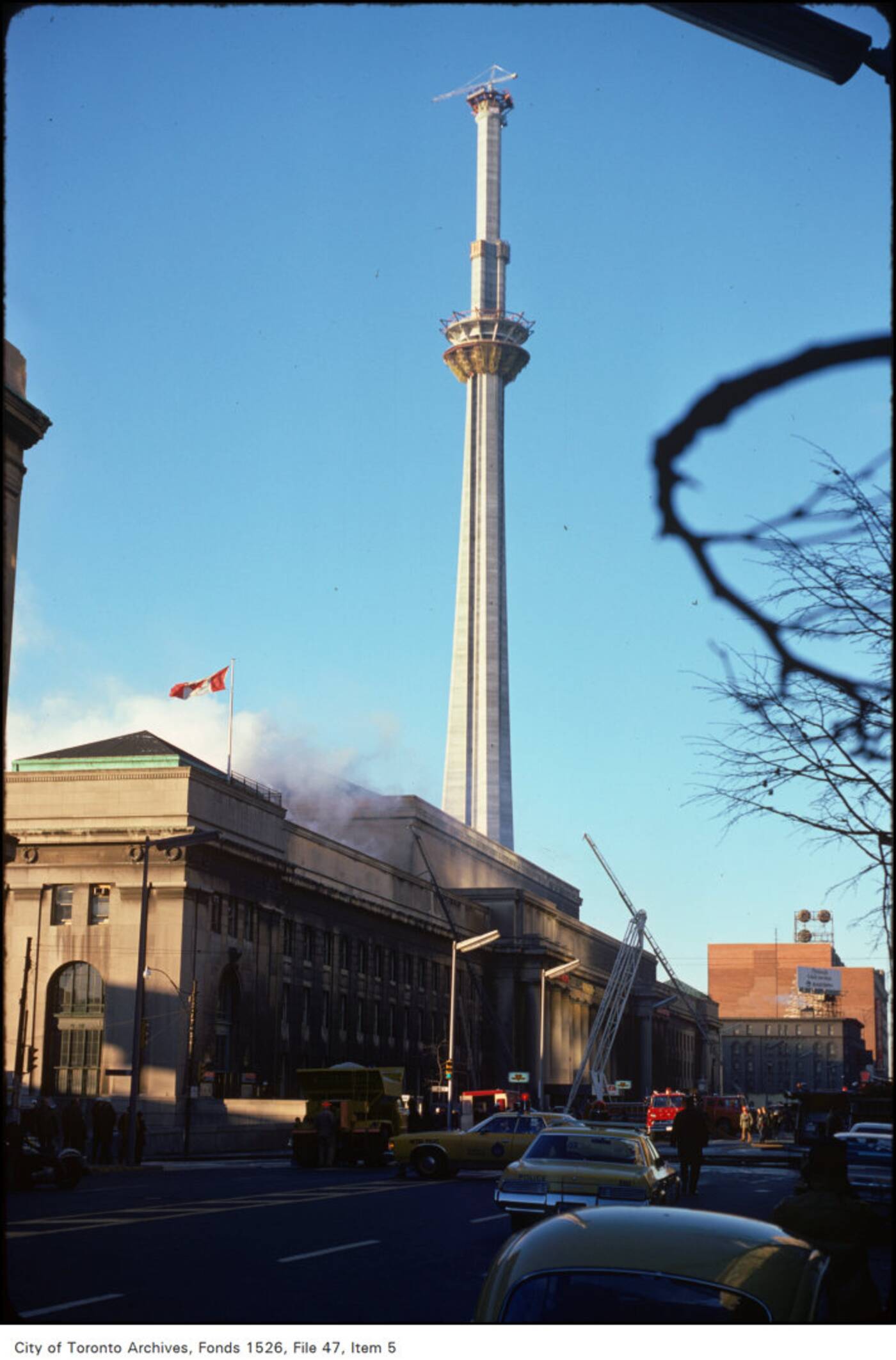 The section that will ultimately become the main pod starts to come into view in November, 1974. 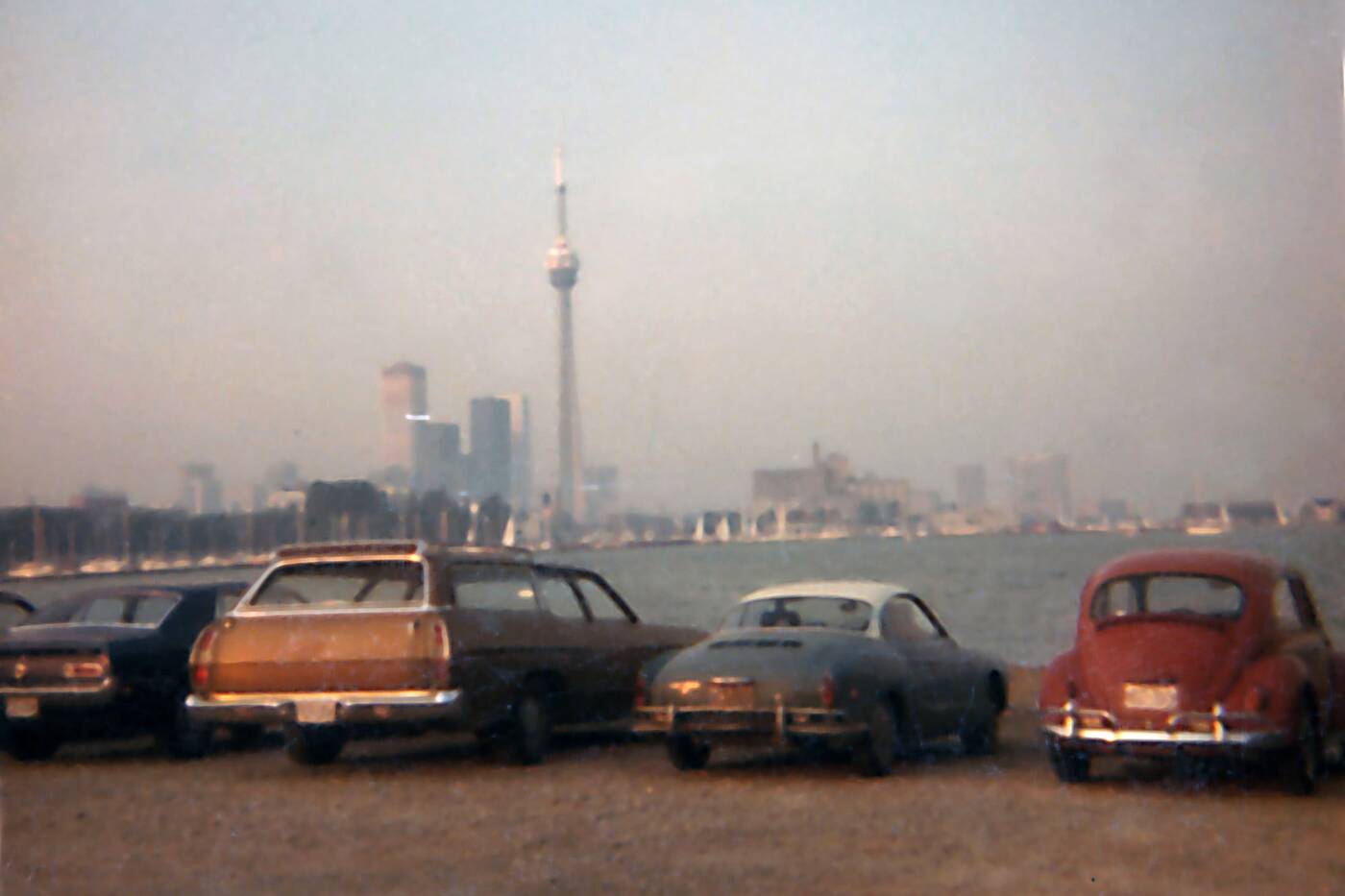 By 1975, the shape of the tower has really come into view courtesy of the growing main pod. 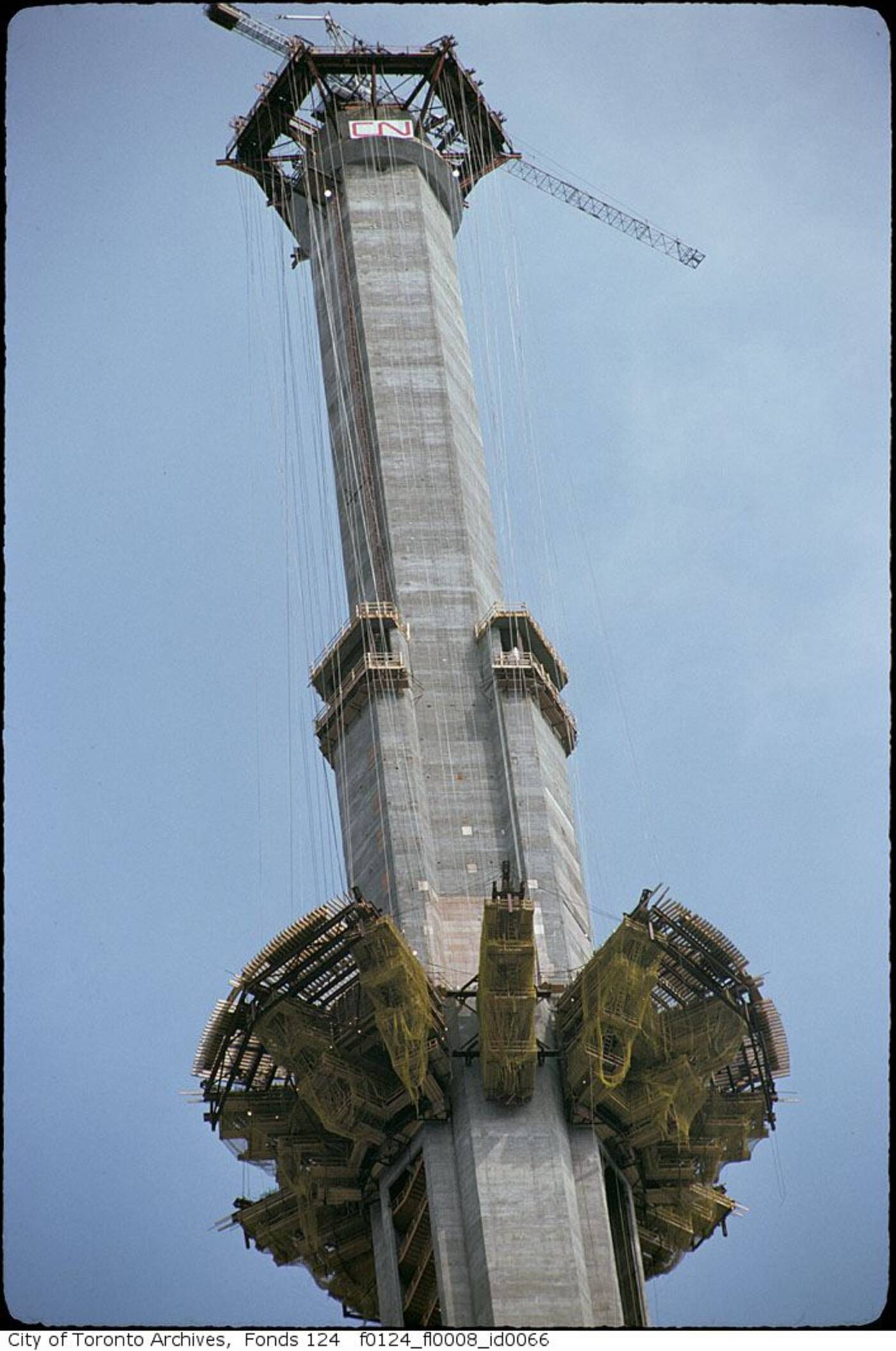 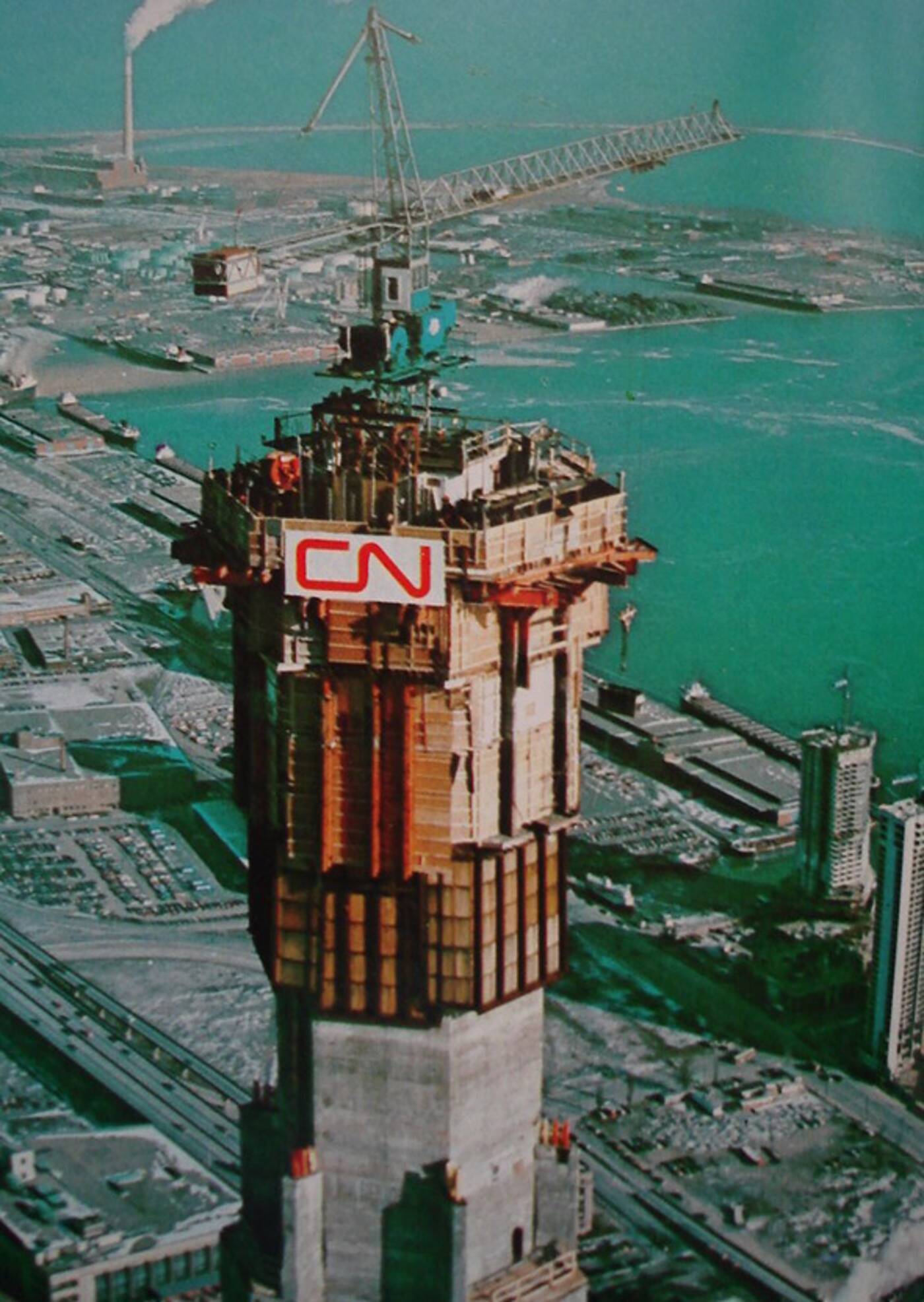 A closer look at the construction platform where the Sky Pod would be built. 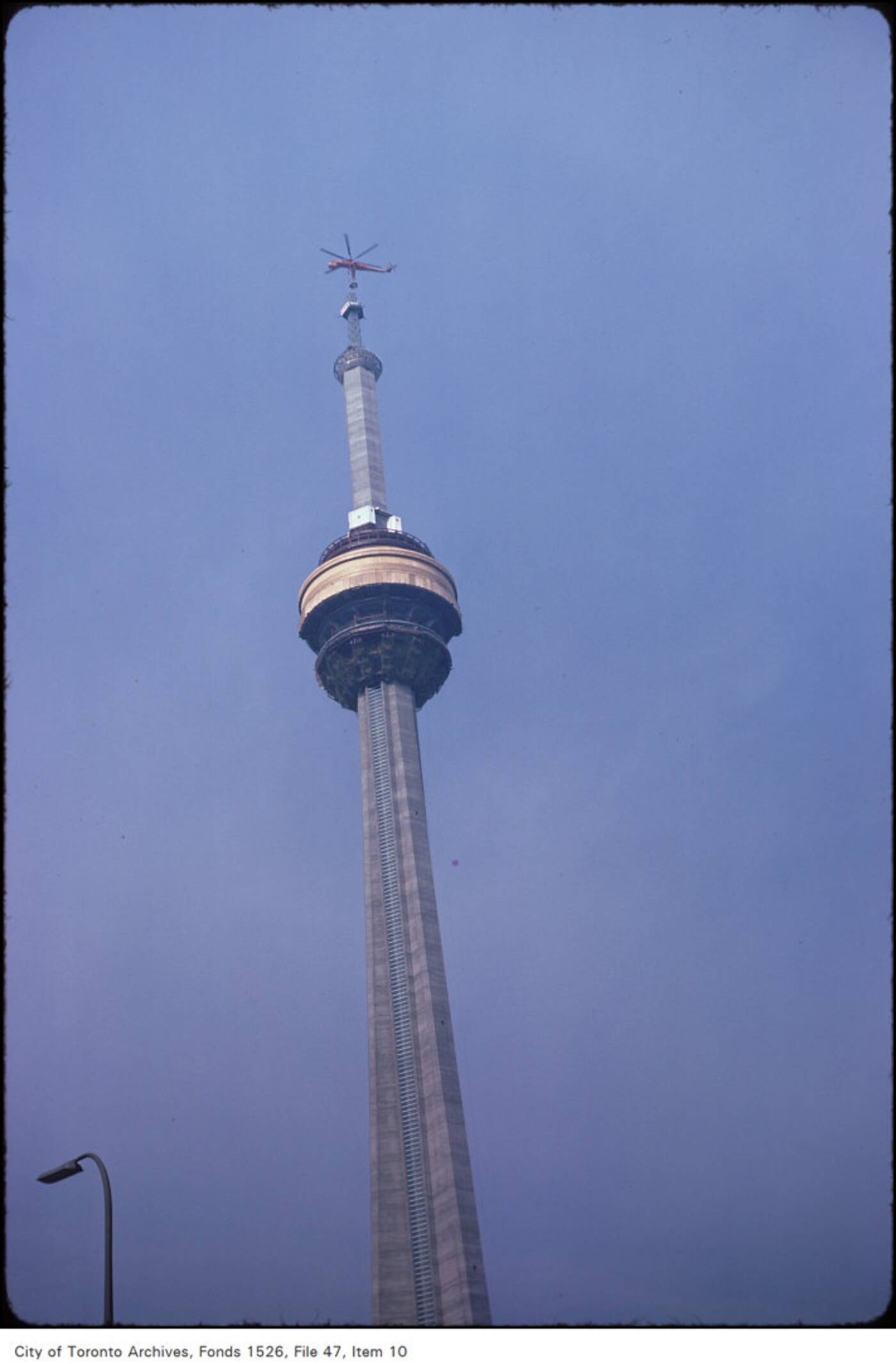 The poured concrete portion of the tower ends after the Sky Pod, so a special helicopter was used to build the upper transmitter antenna. 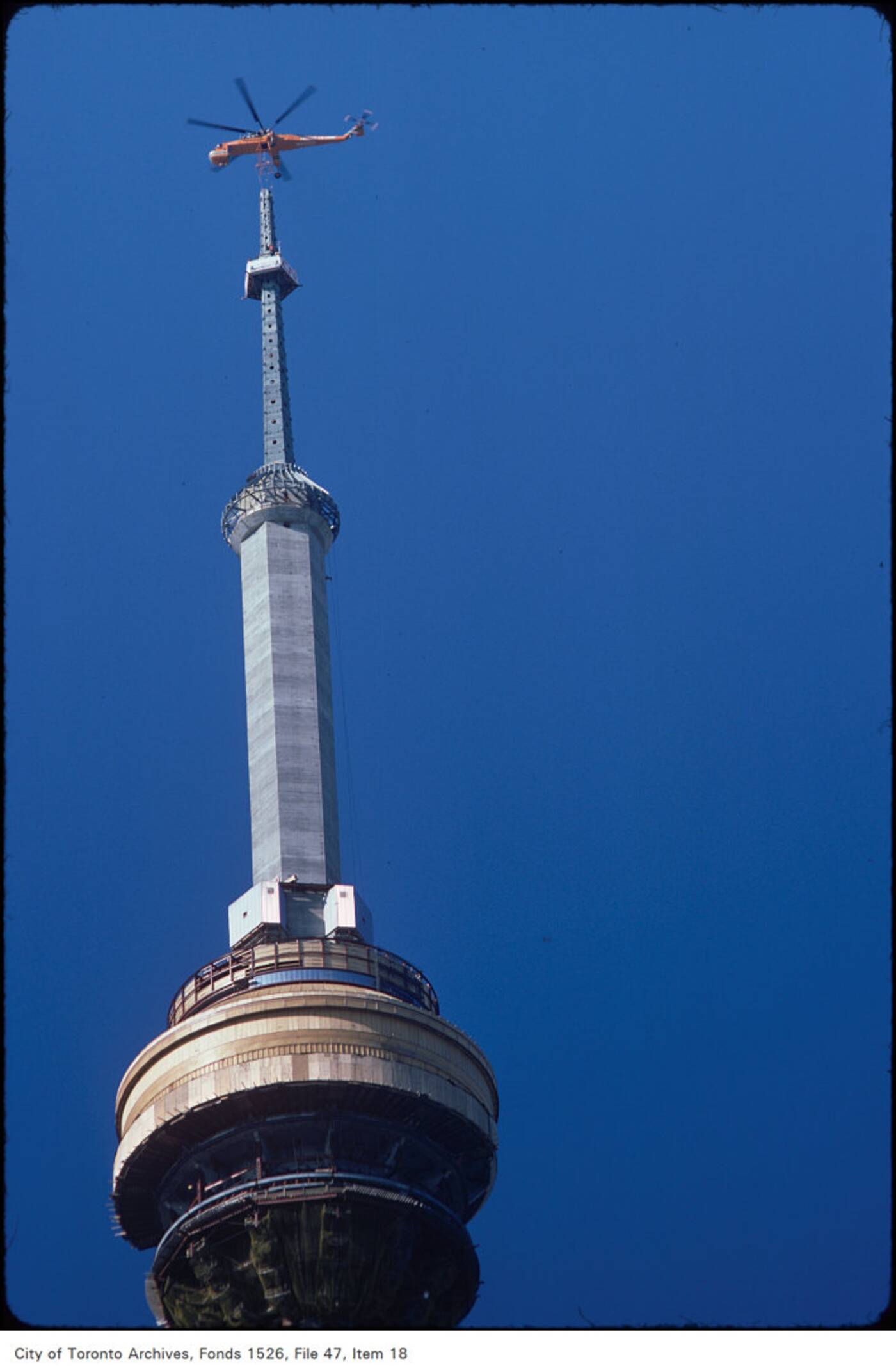 This marvel of engineering captured the attention of many amateur photographers of the day, and the helicopter installation work was widely captured in 1975. 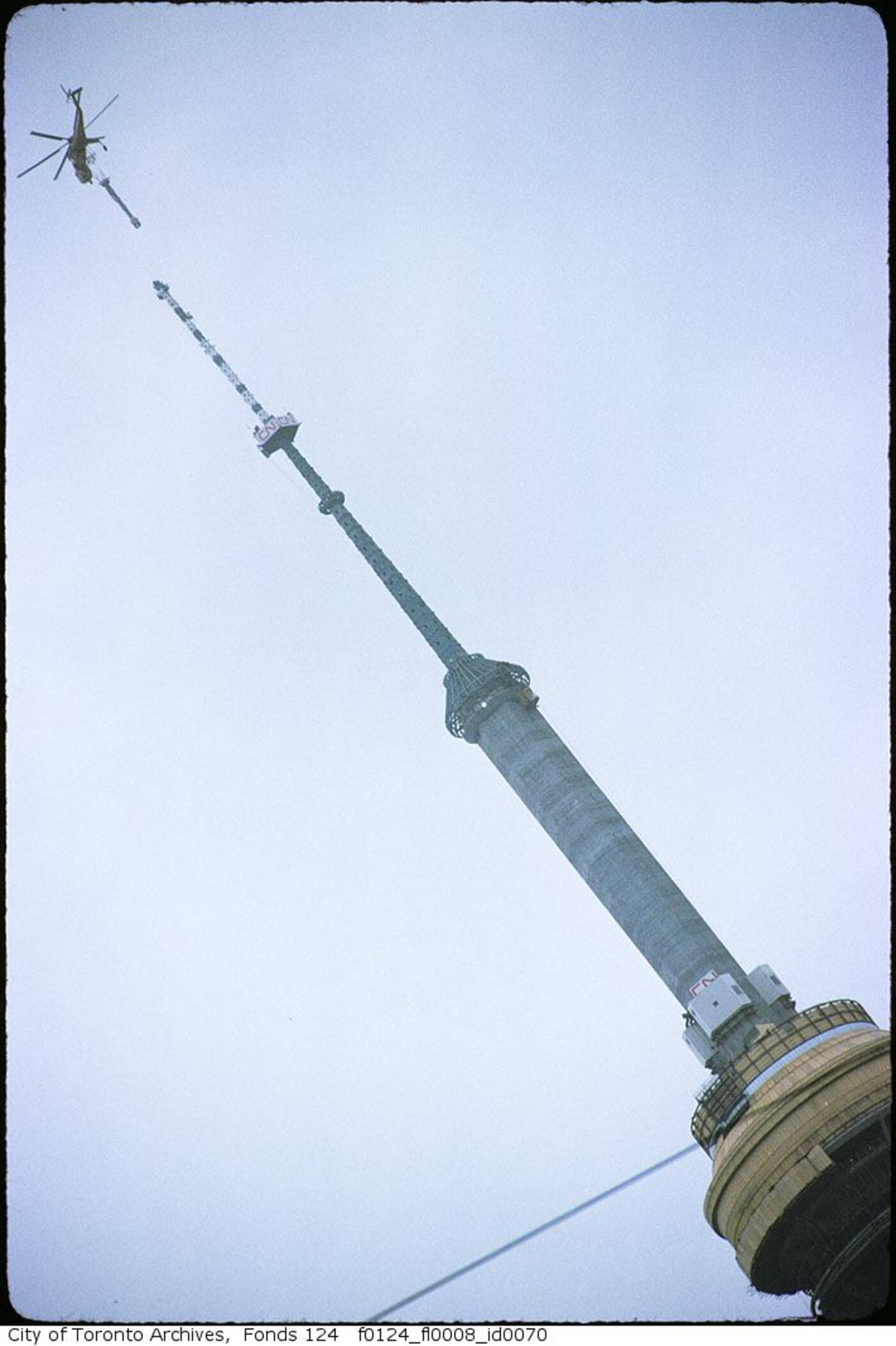 A remarkable view of a Sikorsky transport helicopter installing the upper portion of the antenna in March 1975.