The City of Toronto held its first public meeting this week for members of the waterfront community to weigh in on two new parks along Queens Quay West.

York Street Park and Rees Street Park will both be located on the North side of Queens Quay at their respective namesake intersections, with work on both parks expected to start this year.

The entire project is the result of a partnership between Waterfront Toronto and the city's department of Parks, Forestry and Recreation, though each agency will focus on building a specific park.

String mapping. Dotmocracy. Envelope Walls. When you’re turning two pieces of concrete on the waterfront into dynamic new public spaces, you use every consultation tool in the book. @LucyTroisi @WaterfrontTO @TorontoPFR pic.twitter.com/XD8FyXWCac

Waterfront Toronto will manage the construction of York Street Park, which will be found where the Gardiner Expressway's old, recently-removed York-Bay-Yonge off-ramp used to stand.

Parks, Forestry and Recreation will take on Rees Street Park, located right across the street from HTO park, directly south of the Rogers Centre. 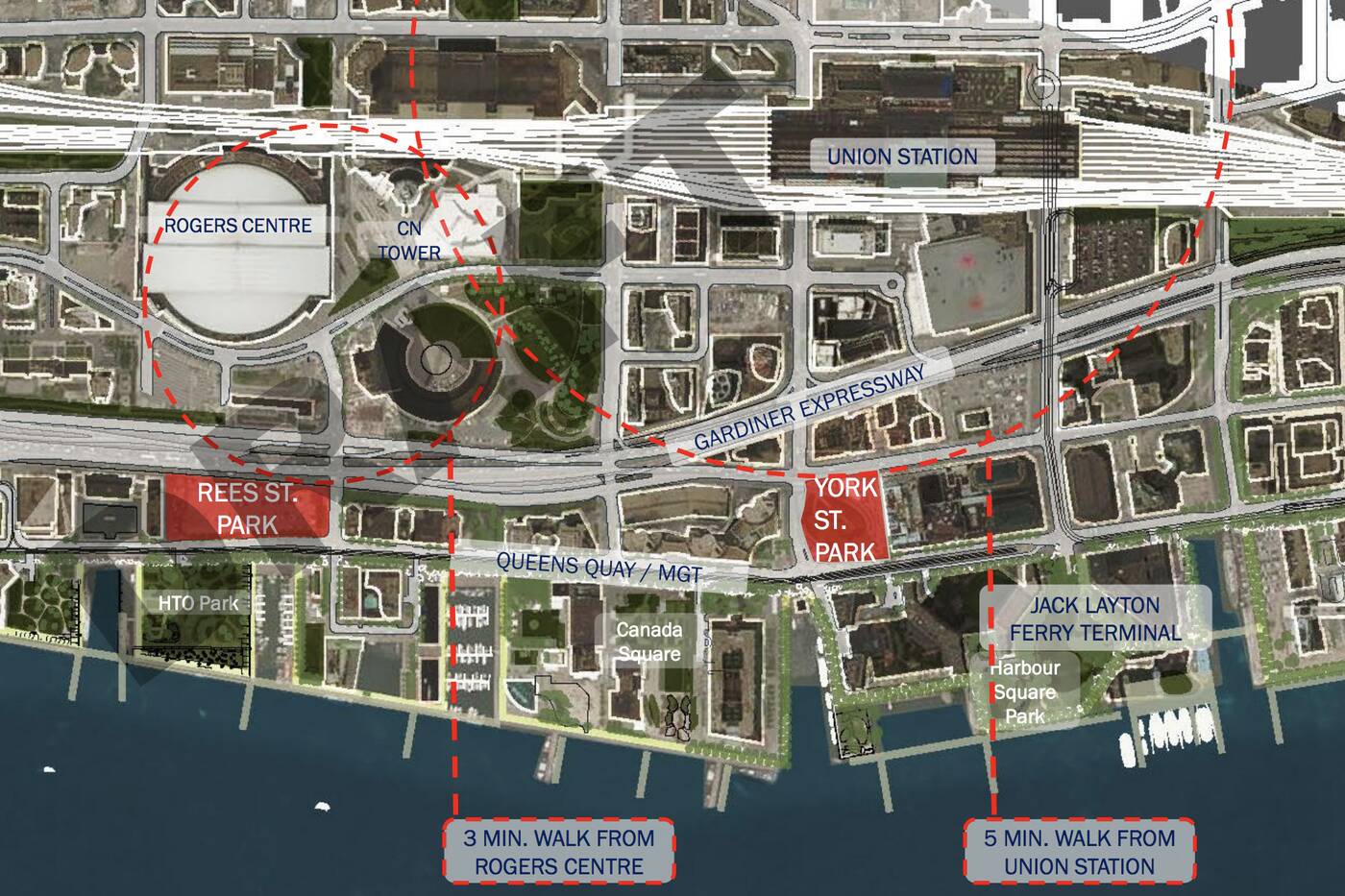 Nothing concrete is known about how the parks will look or function at this point – officials are only at the design phase – but a number of interesting ideas were floated in a Design Review Panel document ahead of this week's meeting.

A site context slide for York Street Park, for example, highlights eight bents left behind by the former highway on-ramp. These bents, arranged in a spiral shape, could be incorporated into the new park's design, along with 12 trees preserved through the ramp's demolition.

Map of the York St. Park, including the eight bents. Couldn’t be removed due to the high water table but can be removed now. Should we? Apparently Harbour St. will have a 2 way bike lane! #BikeTO #TOpoli pic.twitter.com/vsGU7gFe1C

Rees Street Park, which is currently just a parking lot, lies directly north of Toronto's iconic wavedecks, which could also somehow be incorporated into the park's general aesthetic.

The goal, according to an invite for Monday's community consultation, is to make both of the new parks spaces "spectacular, unique and full of new year-round experiences."

The history of the Humber Heights-Westmount neighbourhood in Toronto

The top 10 options for moving boxes in Toronto