While Toronto's recently installed sky bridge is all the buzz right know, it's not the only upgrade in store at Yonge and Queen streets. In fact, it's really only the first step in what will be a more dramatic makeover of the bustling intersection that serves as a gateway for the Eaton Centre.

The building on the northwest corner of the intersection is in the early stages of what will be a stunning heritage makeover that will finally reveal the entirety of its brick facade, much of which has been covered for over 50 years. 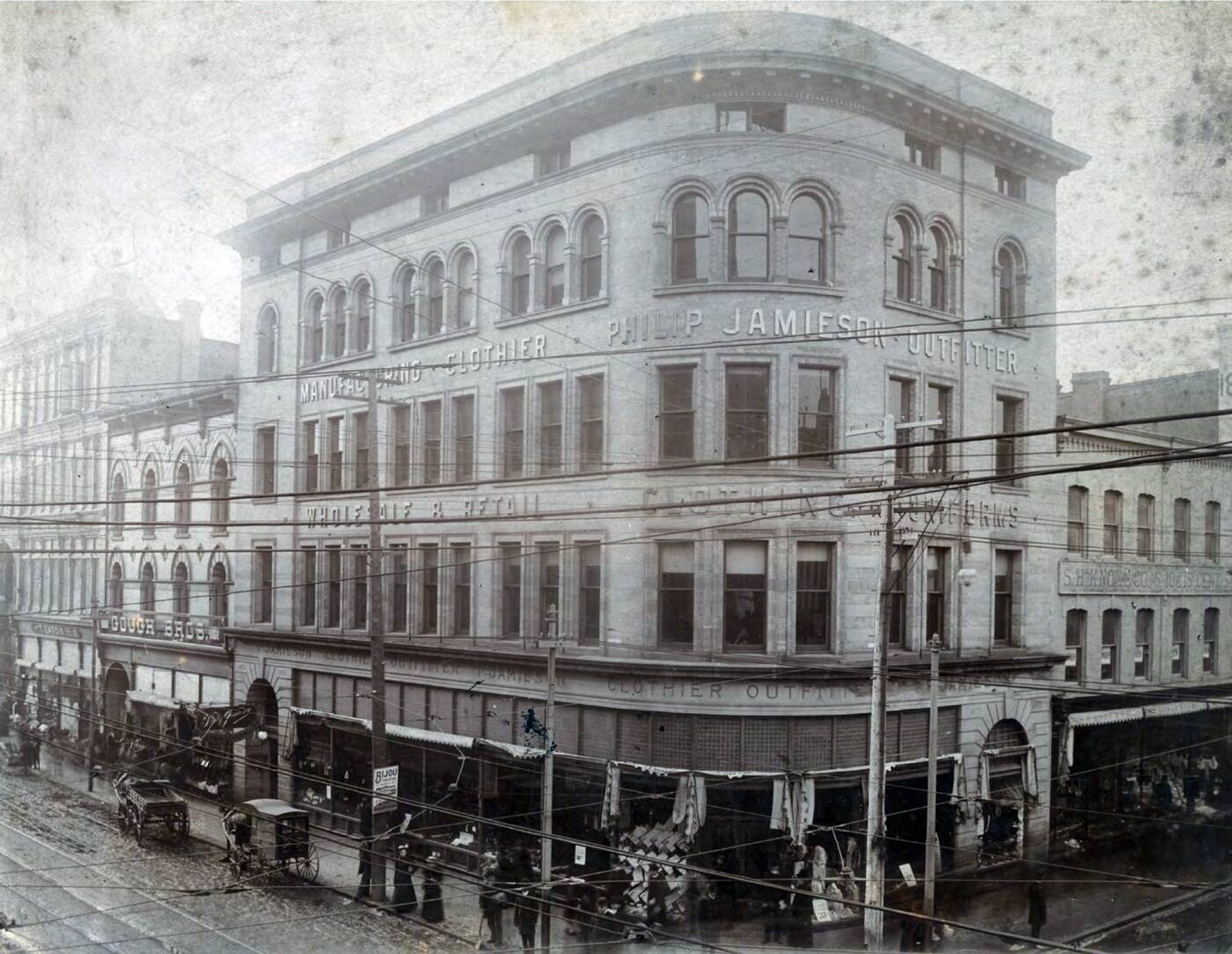 What the building looked like in 1897 when it was home to the Philip Jamieson Clothing Company. Photo via the Toronto Public Library.

Going back to the late 19th century, this curved structure was home to the Philip Jamieson Clothing Company, though most will remember it as the longstanding home to Woolworth's flagship Toronto location. 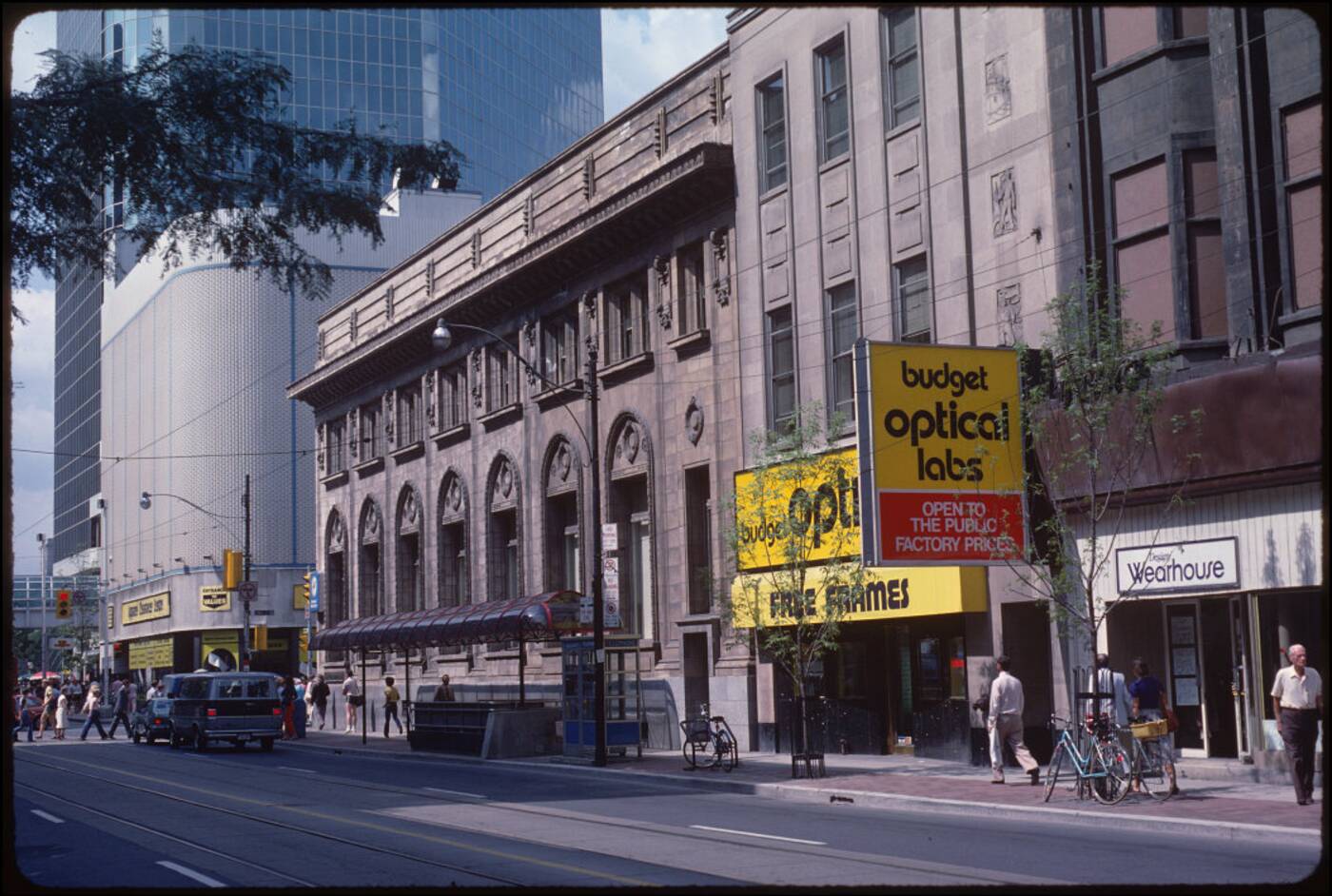 The building was completely incased as of the late 1960s. It's on the far left of the frame here, looking west on Queen St. Photo via the Toronto Archives.

Early photos reveal just how nice this building once was, but at some point in the late 1960s, it was encased in off-white cladding that completely obscured its heritage elements. 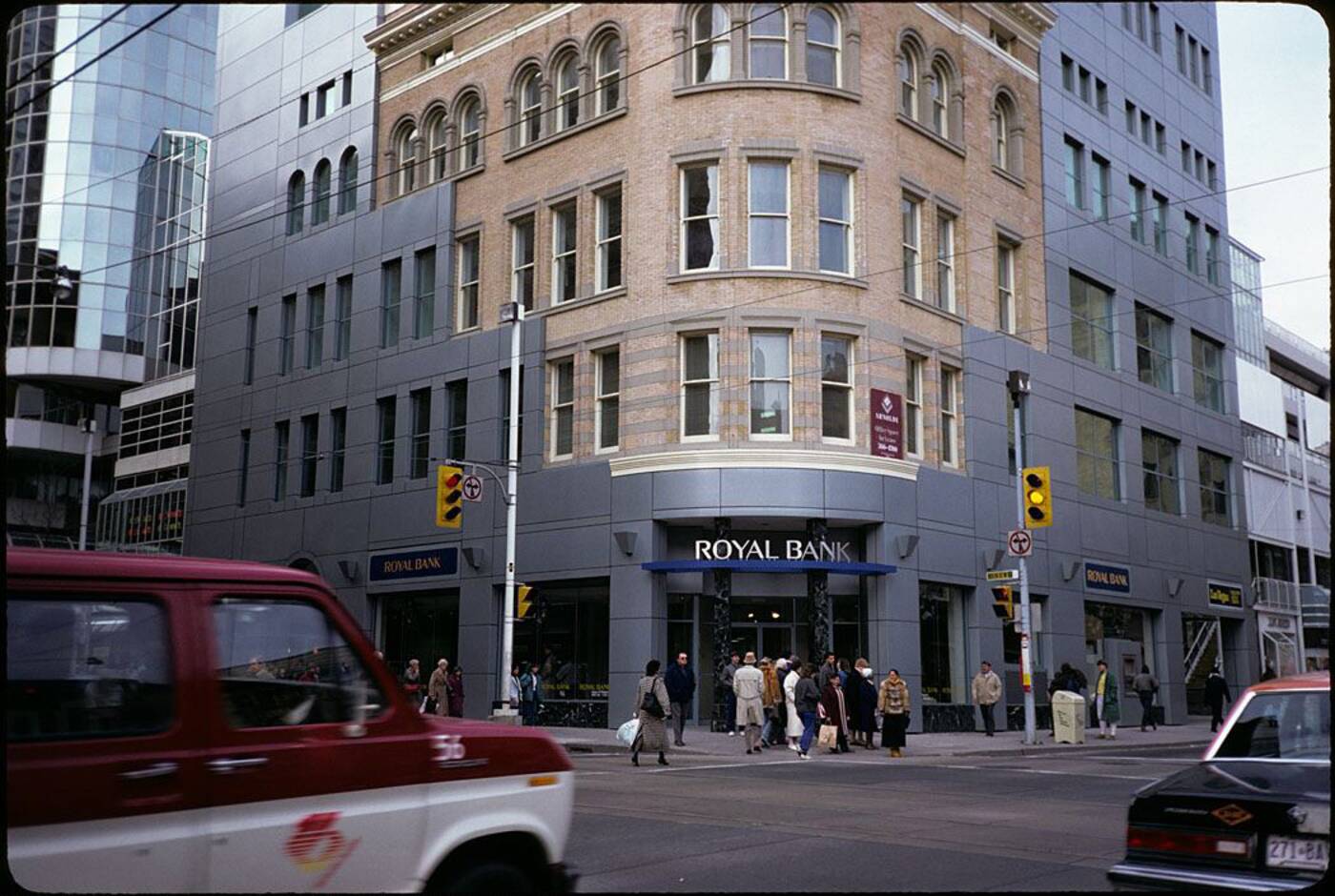 The makeover of the 1990s revealed some of the heritage elements, but covered the rest in aluminum cladding. Photo via the Toronto Archives.

It would remain that way until the early 1990s, when part of the historic facade was revealed and the remainder of the building was encased in new metal siding. This is the way most of us have seen the building as it changed hands from Royal Bank to Tower Records and the eventually to Atmosphere, an outdoor equipment store. 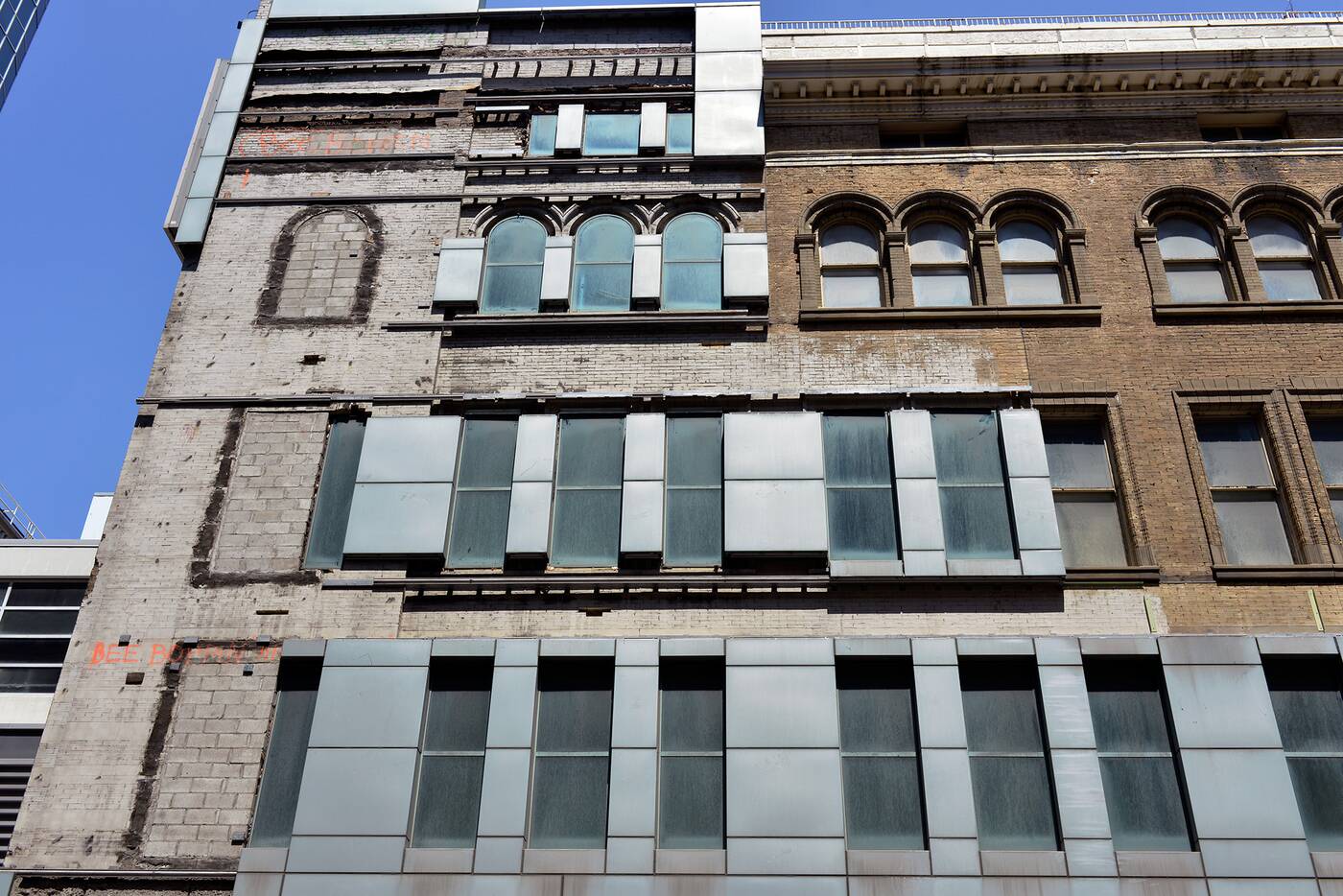 It looks bleached and worn, but much of the original brick is still there. Photo by Derek Flack.

Now all the siding is coming off. Crews recently started work pulling back the aluminum casing that's hidden away most of the south- and east-facing sides of 2 Queen Street West. It doesn't look pretty right now, but there are big plans in store. 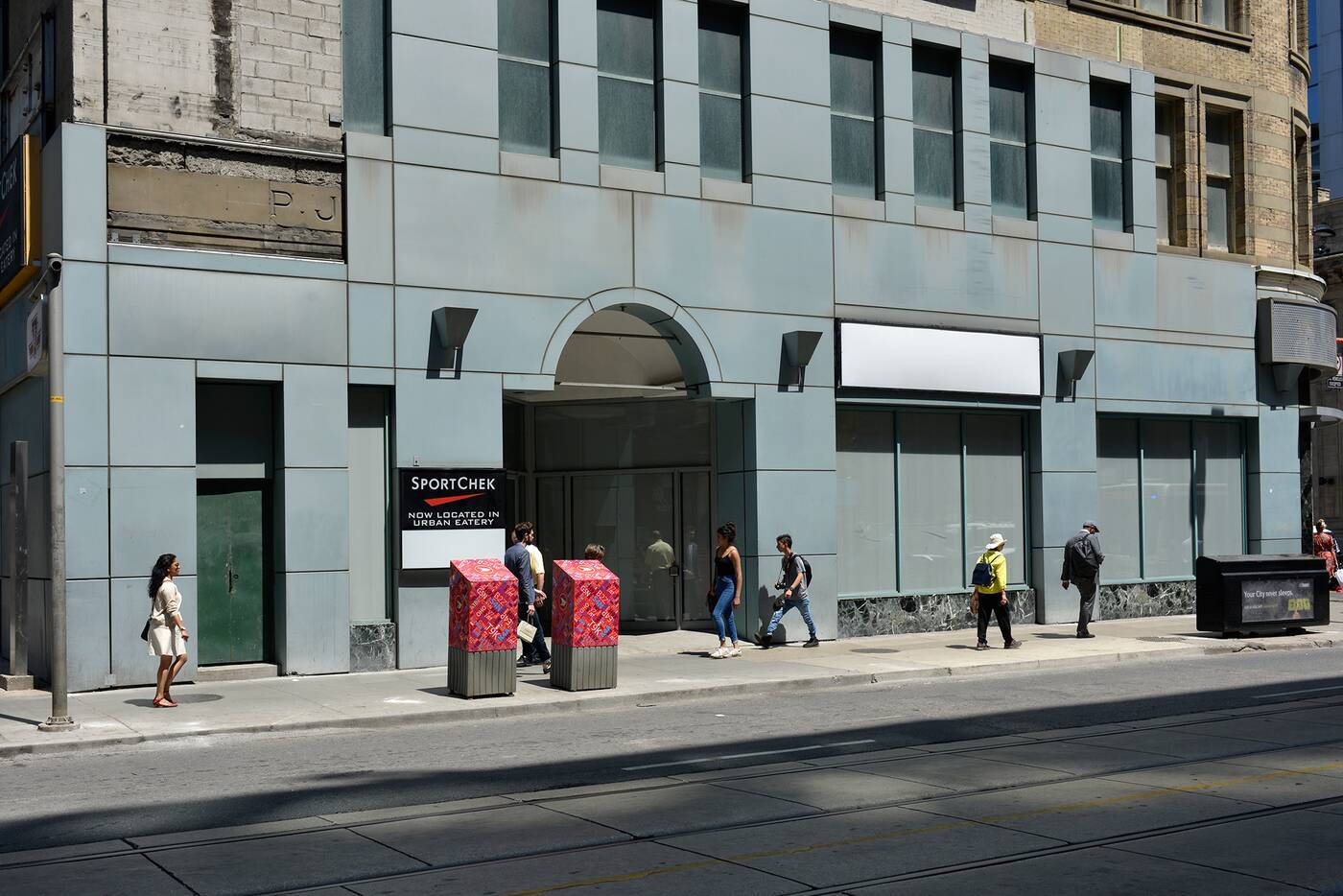 New retail is destined for the ground floor here, as well as restaurant space up top. Photo by Derek Flack.

Already you can see hints of the original building coming into view — including the "P. J." marking the first occupant — but the brick is in rough shape and will need plenty of care to bring it back to stature promised by the previously restored section at the front of the building. 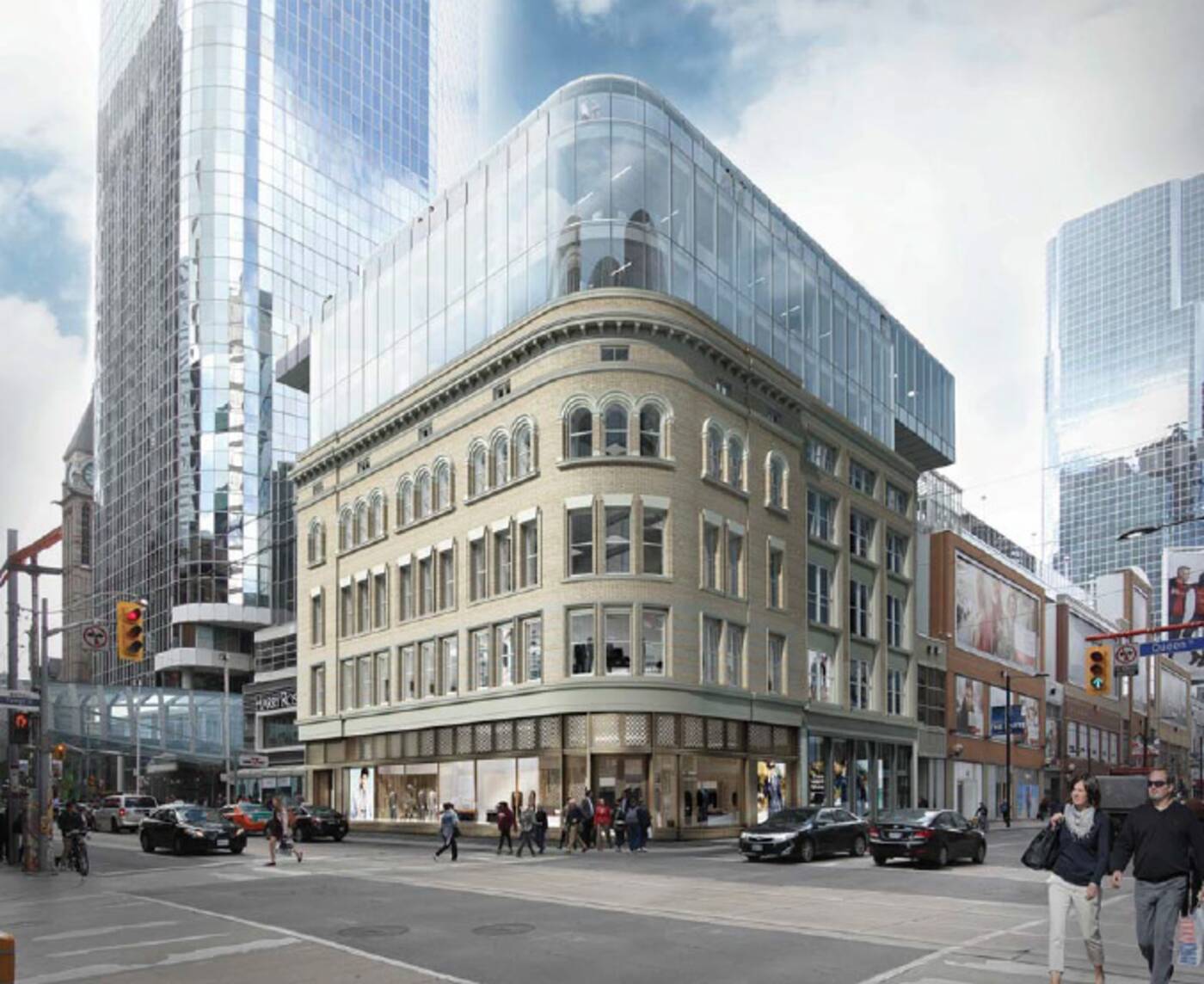 What the finished product will look like. Image via Cadillac Fairview.

When it's all said and done, the makeover calls for a complete restoration of the historical facade plus a three-storey glass addition at the top that will ultimately be home to a restaurant space. 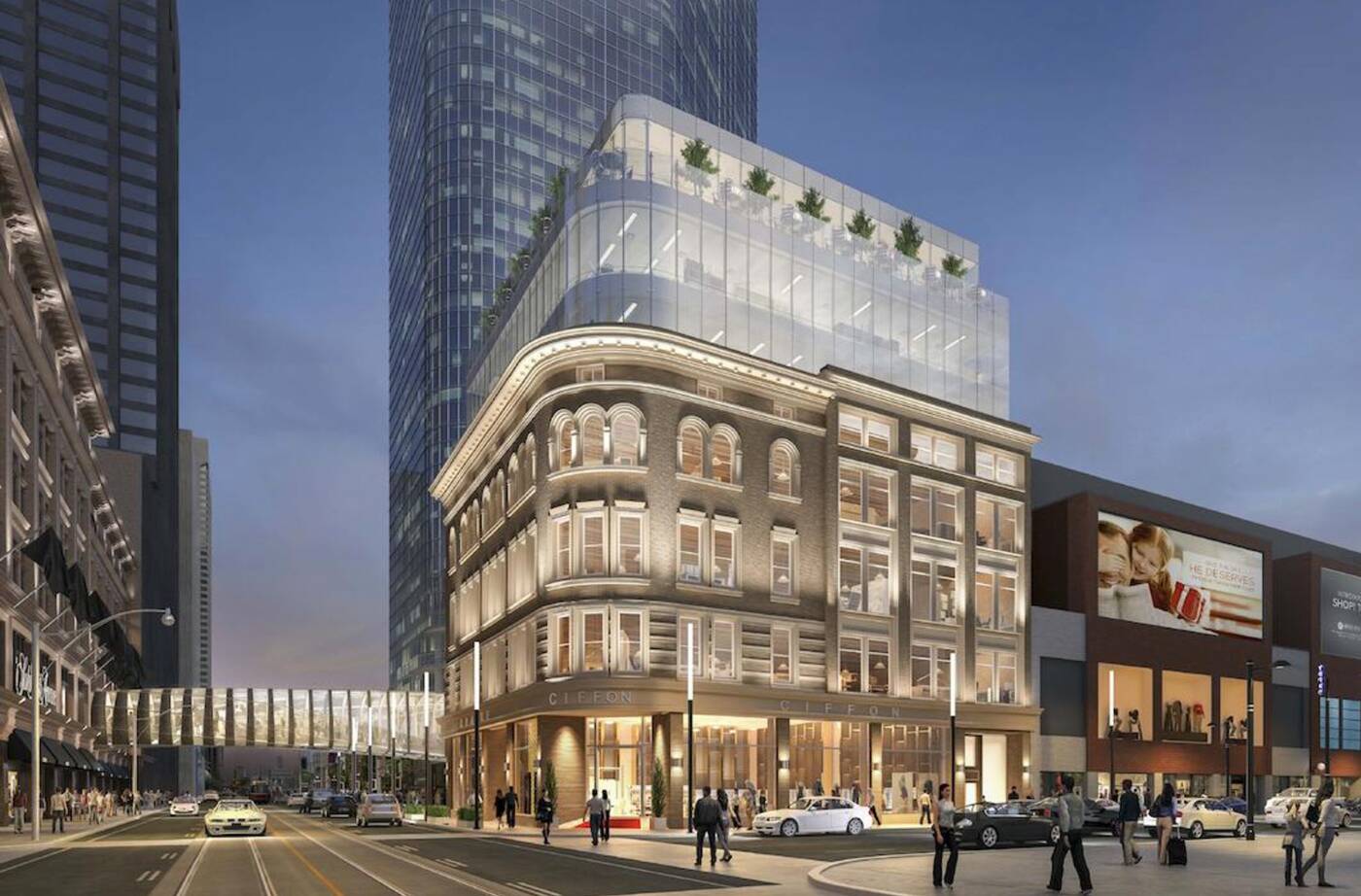 The new sky bridge and restored 2 Queen St. will provide a much improved southern gateway to the Eaton Centre. Image via Cadillac Fairview.

The whole thing is quite reminiscent of the work that was done on the Dineen Building a few years back. Design work here is by Zeidler Partnership Architects (who also helped with the fancy new pedestrian bridge), the original designers of the Eaton Centre. Heritage input will come from ERA Architects.

It'll be fascinating to see this one shape up. Ever since the original Eaton's complex was demolished this portion of Yonge St. hasn't felt quite properly integrated with streetscape at large. This could go some way towards changing that.