Secret places to explore in Ontario are generally off the beaten path, so even if people have heard of them, they rarely make the trip to go see these natural wonders. Yet, everyone should. There are some truly spectacular places to explore in this rugged province. Just make sure to check first on new rules for visiting as things are different this year.

Here are some secret places to explore in Ontario before summer is over.

The massive rock formations at Flowerpot Island were formed over millennia and they're one of a number of gems you'll find if you make the trek to Tobermory (there are also shipwrecks and a nearby grotto). You can only get there by boat, but the dramatic landscape is certainly worth the 6.5 kilometre ride.

It's a bit of a hike to get to Balaclava (located just west of Renfrew), but the gorgeous old mill at the centre of the once thriving community here is worth the trip. The town was founded in the mid 19th century, but eventually faded when the supply of nearby timber was depleted. 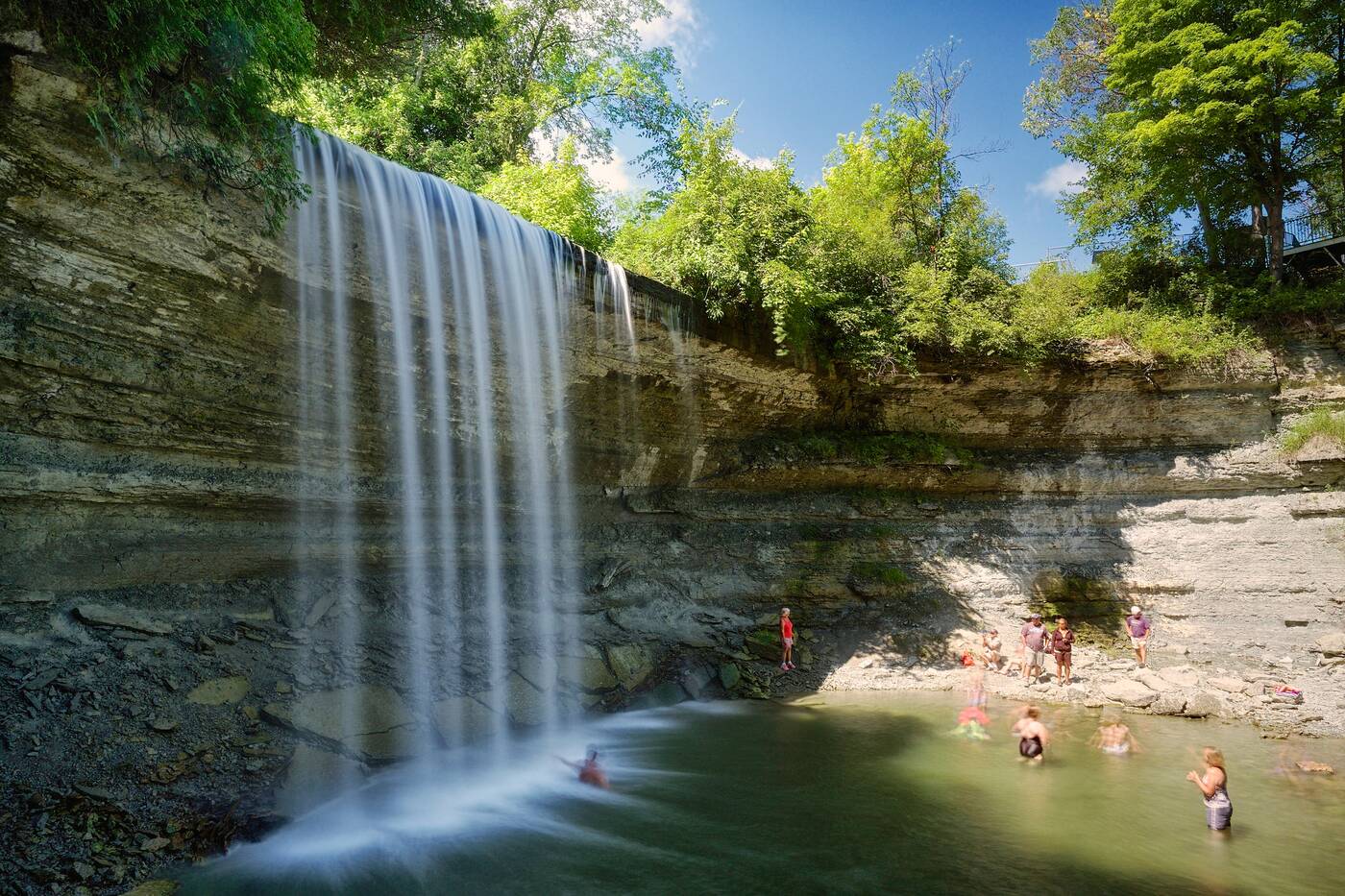 Quite possibly the most beautiful place to swim in the province. Photo by twurdemann.

You can't go wrong by exploring Hamilton's array of stunning waterfalls, but Bridal Veil Falls on Manitoulin Island will make you feel like Tom Cruise and Elizabeth Shue in Cocktail. You can actually swim under the waterfall! By mid summer, the water temperature is actually quite friendly.

This off-the-beaten-track lookout tower near Lake of Bays is noteworthy for the undisturbed beauty it soars above. When mist rises from the lake in the morning, the scene can seem almost unworldly it's so gorgeous. At 142 metres, you get a panoramic view of Muskoka.

The problem with swimming in Lake Superior is that it's so damn cold, but that's not the case at this mini Island in Katherine's Cove. Lake water collects in shallow rock formations and is then heated by the sun. There's a bit of a sandbar to help you cross the cove, but you'll get a bit cold on the way over.

These beautiful old ruins date back to the 1860s along the Credit River in Georgetown. Various development projects have been pitched for the area, but a heritage designation in 2008 has helped to slow the process, which means it's still possible to explore.

These sand cliffs are bigger than they look. Photo by Ontario's Southwest. 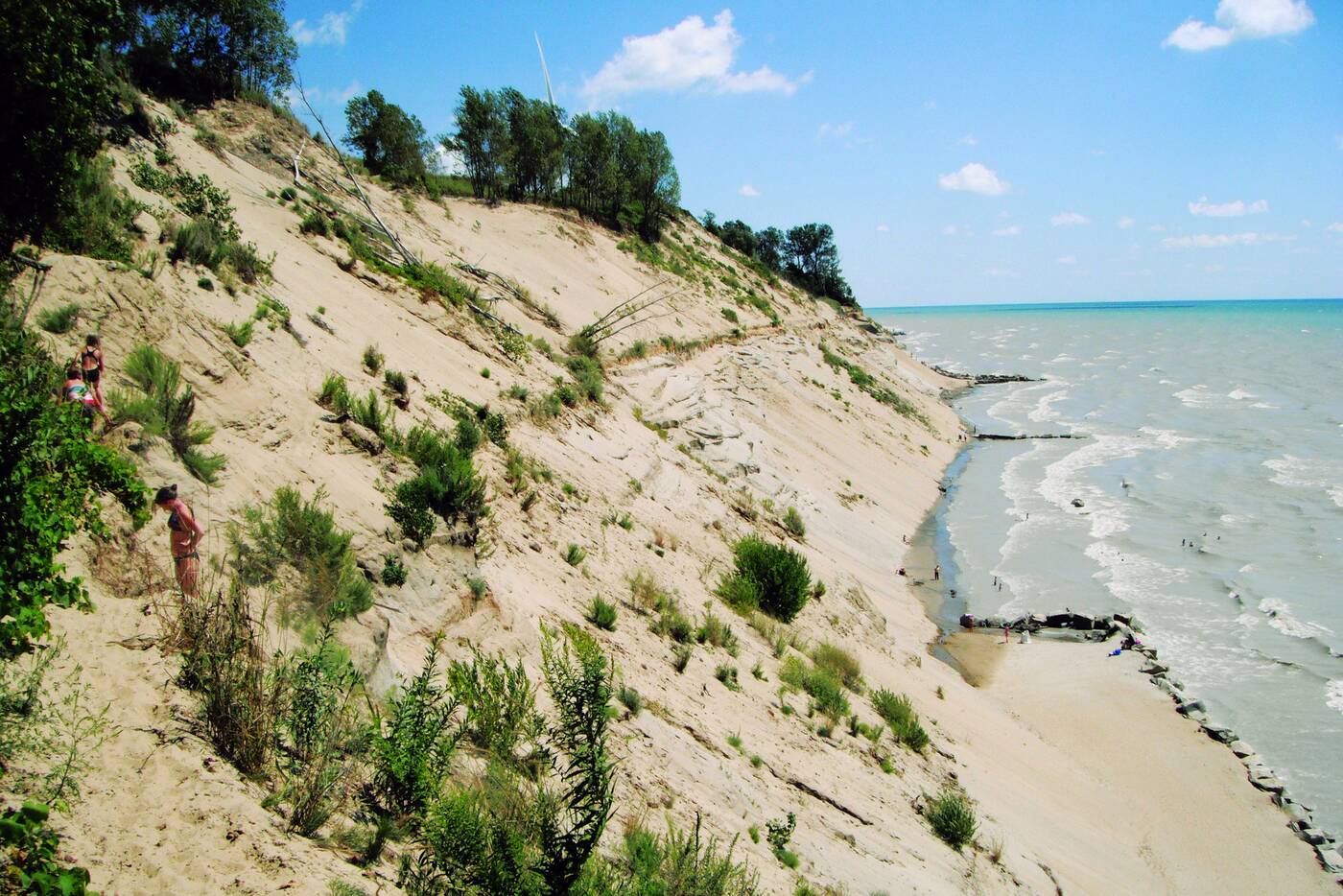 This hidden gem on the shores of Lake Eerie is like Sandbanks but better. The size of the sand hills is surreal, but the best part is trying run down to the water before inevitably tumbling into the soft sand. You can camp overnight here, but it's best as a day visit.

This natural lookout features multiple vantage points to gaze out across the rugged land that stretches west toward Haliburton. The two-level wood structure is your best bet for photo-taking, though the trails that line the ridge also make for a pretty hike. If you're lucky, you'll get to see a small plane land at the airport below.

There are actually lots of cool caves to explore across Ontario, but the Tyendinaga Cavern is special for its aquamarine wishing well and the friendly staff who give guided tours. This is a subterranean treasure that owners Charles and Elizabeth Koch speculate is 100,000 years old.

This rugged bit of Crown Land outside of Gravenhurst is probably the best place to stargaze within a few hours of Toronto. But it's also remarkable during the day when you can explore the lake and surrounding barrens while camping for free.

twurdemann. With files from Derek Flack.