South Core keeps on rising. Once a sea of parking lots and highway ramps, the area south of Front Street in Toronto has become a highly populated vertical city in the span of about a decade.

There's a multi-storey parking garage at Queens Quay and York Street that used to provide an immaculate view of the Royal York Hotel and the skyline. Venture up there today, and you'll be confronted with a wall of condos that tower over you. 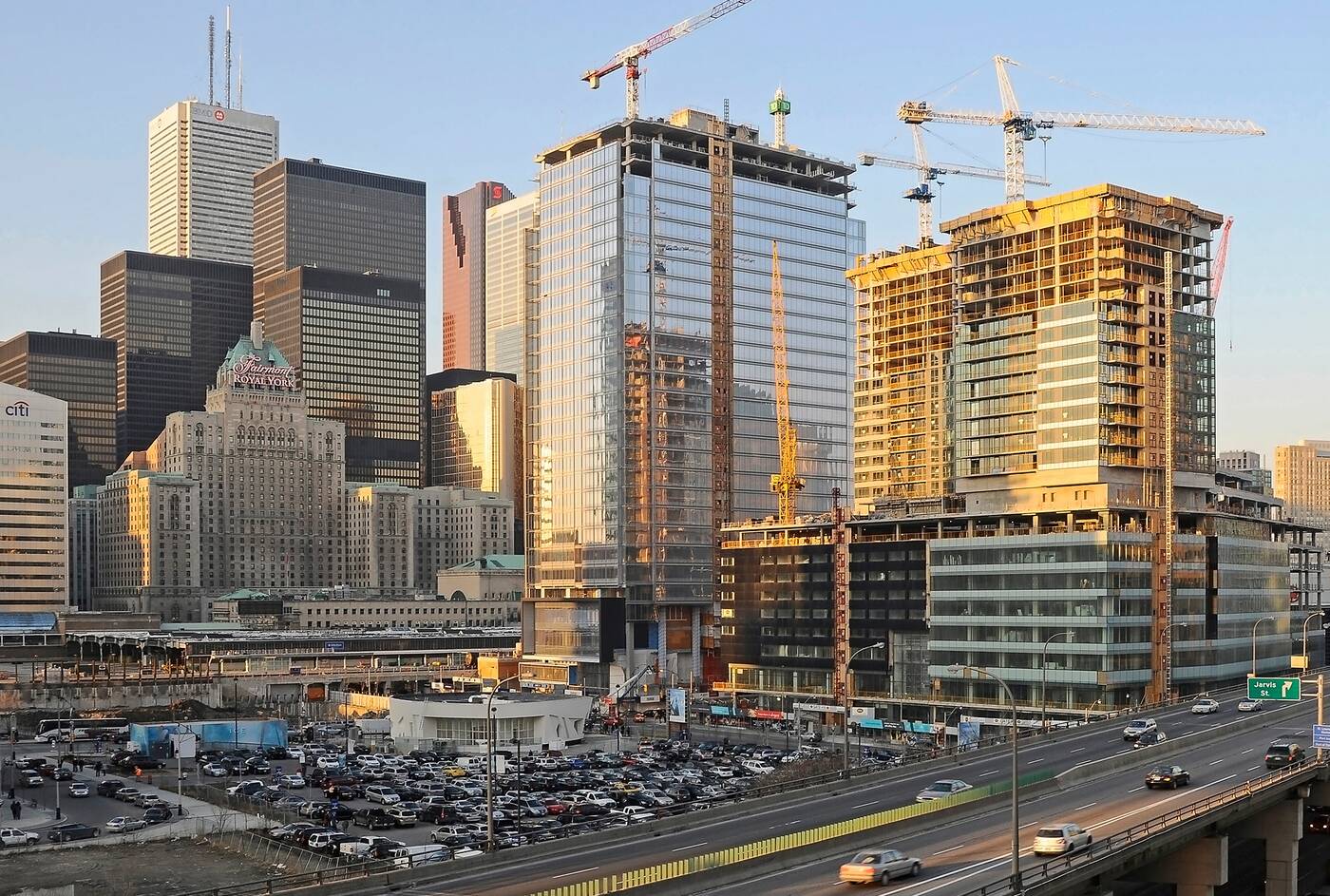 What South Core looked like in 2009. Photo by Derek Flack.

South Core was already exerting tremendous influence on Toronto at the turn of this decade with the rise of Telus House and the PwC Building along with a host of new towers outside of the traditional Financial District (RBC Dexia and the Ritz Carlton, for instance).

These office towers, and the ones that followed, redrew the city's lines, expanding the concept of the downtown core. As the condos started to rise, a new neighbourhood was born and amenities like restaurants, grocery stores and other retail soon followed.

This combination of condos and office towers is one of the main reasons why South Core has witnessed such an amazing amount of development. While the King and Bay-centred Financial District is dominated by office space, here people can live beside where they work. 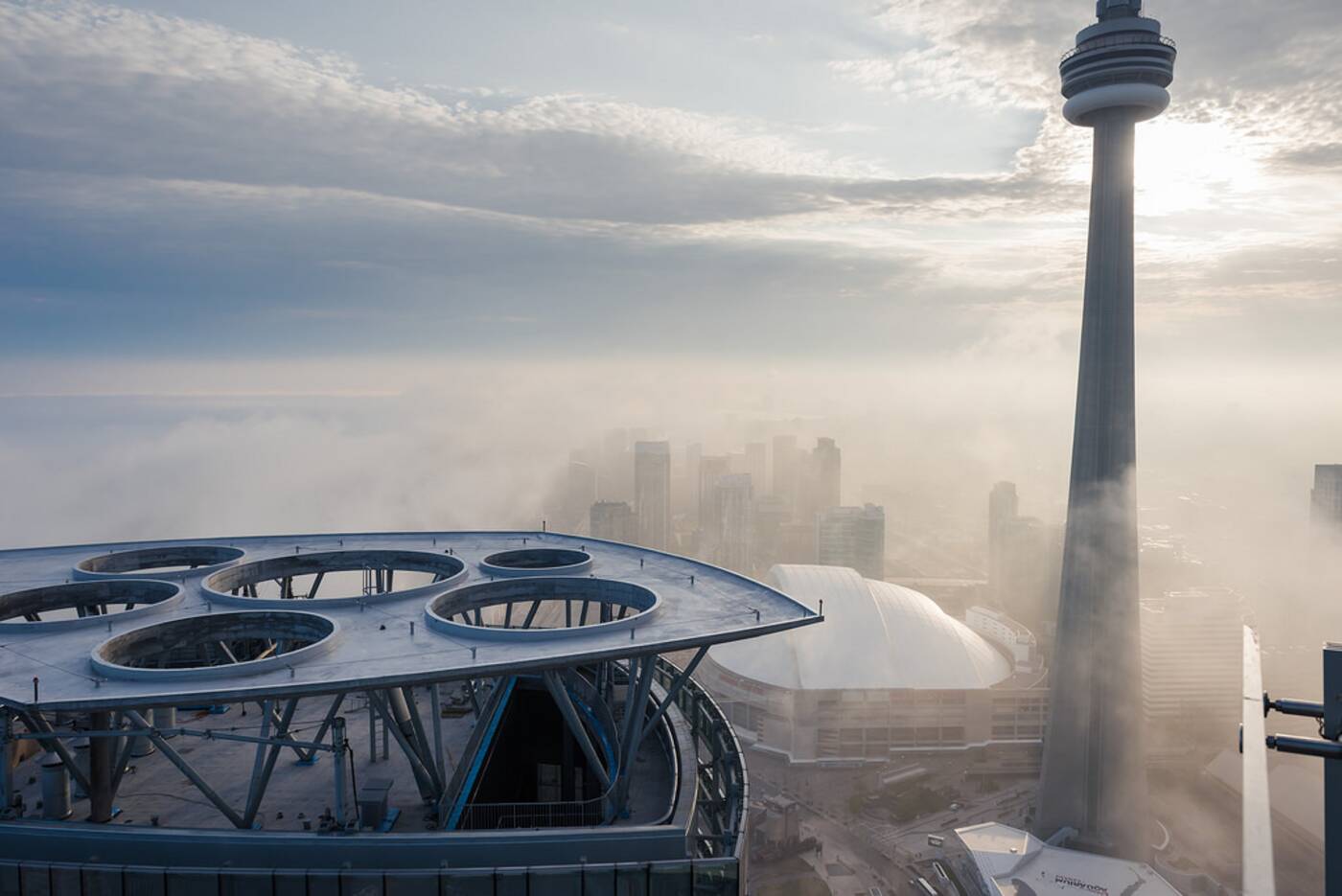 This formula continues to inform the future of South Core. Following the completion of ICE Condos in 2015, the next phase of development will see more AAA office space and towering condos.

This is a big year for the area as multiple projects near completion. Harbour Plaza, for instance, has already made its mark on the skyline with its dual towers and undulating balconies, though occupancy isn't expected until the summer. 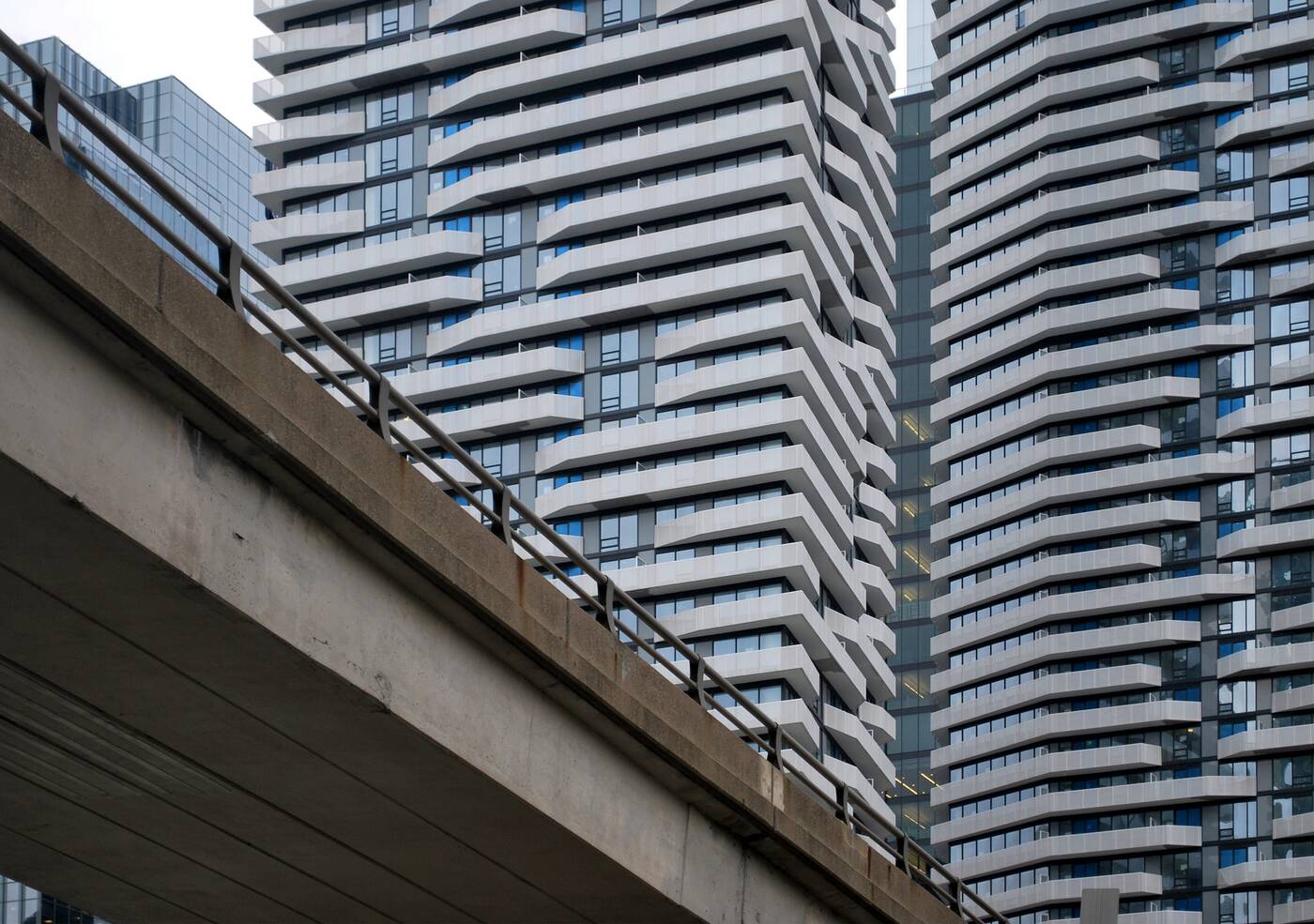 Some 1,200 condo units will be added here, but these only represent two thirds of the development from Menkes and HOOP. The already completed Sun Life Financial Tower is another huge component that drives activity to the bottom of York Street.

And it's only getting busier down here. 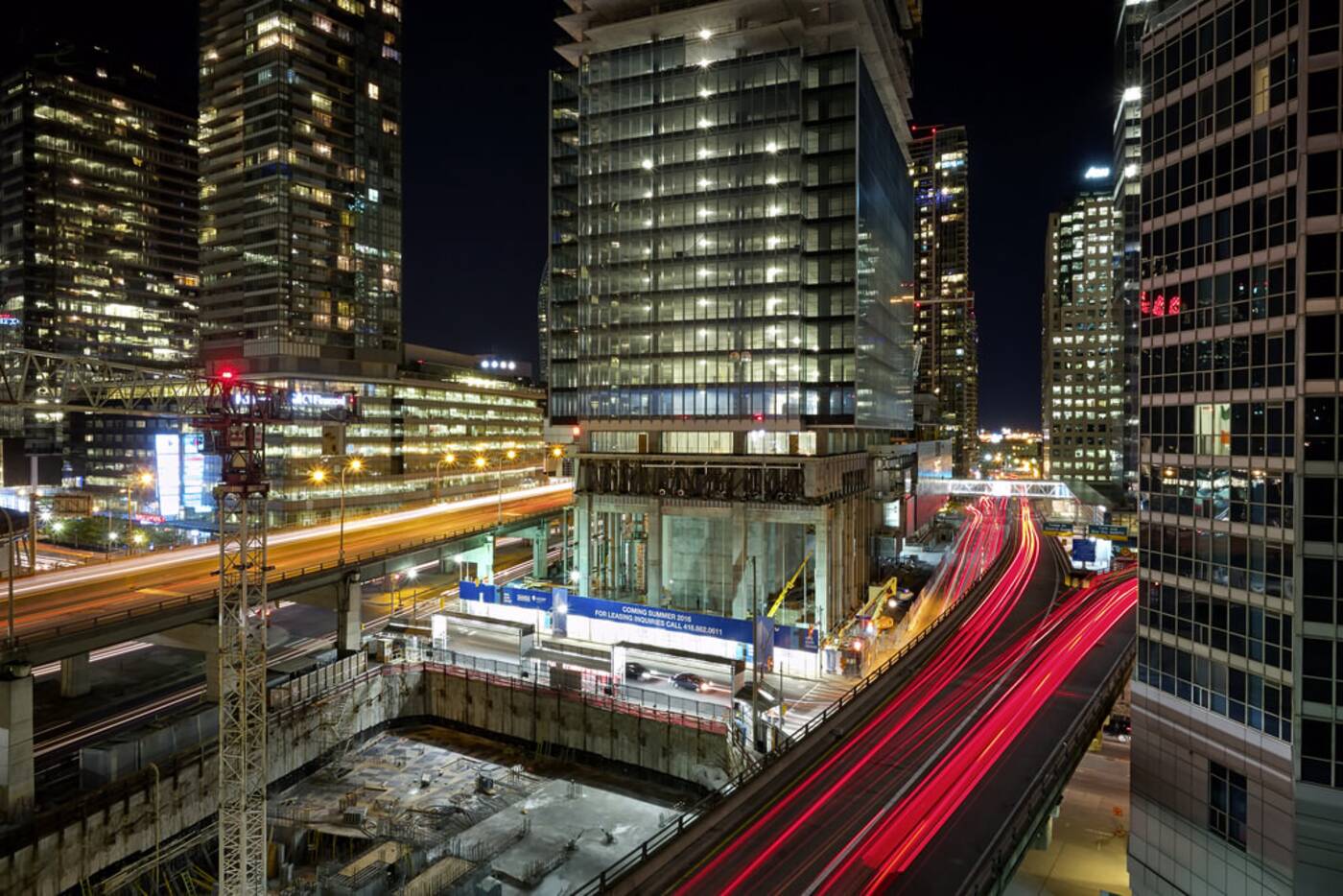 Early stages of construction on 10 York St. The building will top out later this year. Photo by twurdemann.

Tridel's 10 York St., with its wedge-shaped podium and tower that rises above the Gardiner Expressway, will top out later this year, eventually adding over 700 condo units and another notch in South Core's portfolio of buildings that have reshaped the skyline. 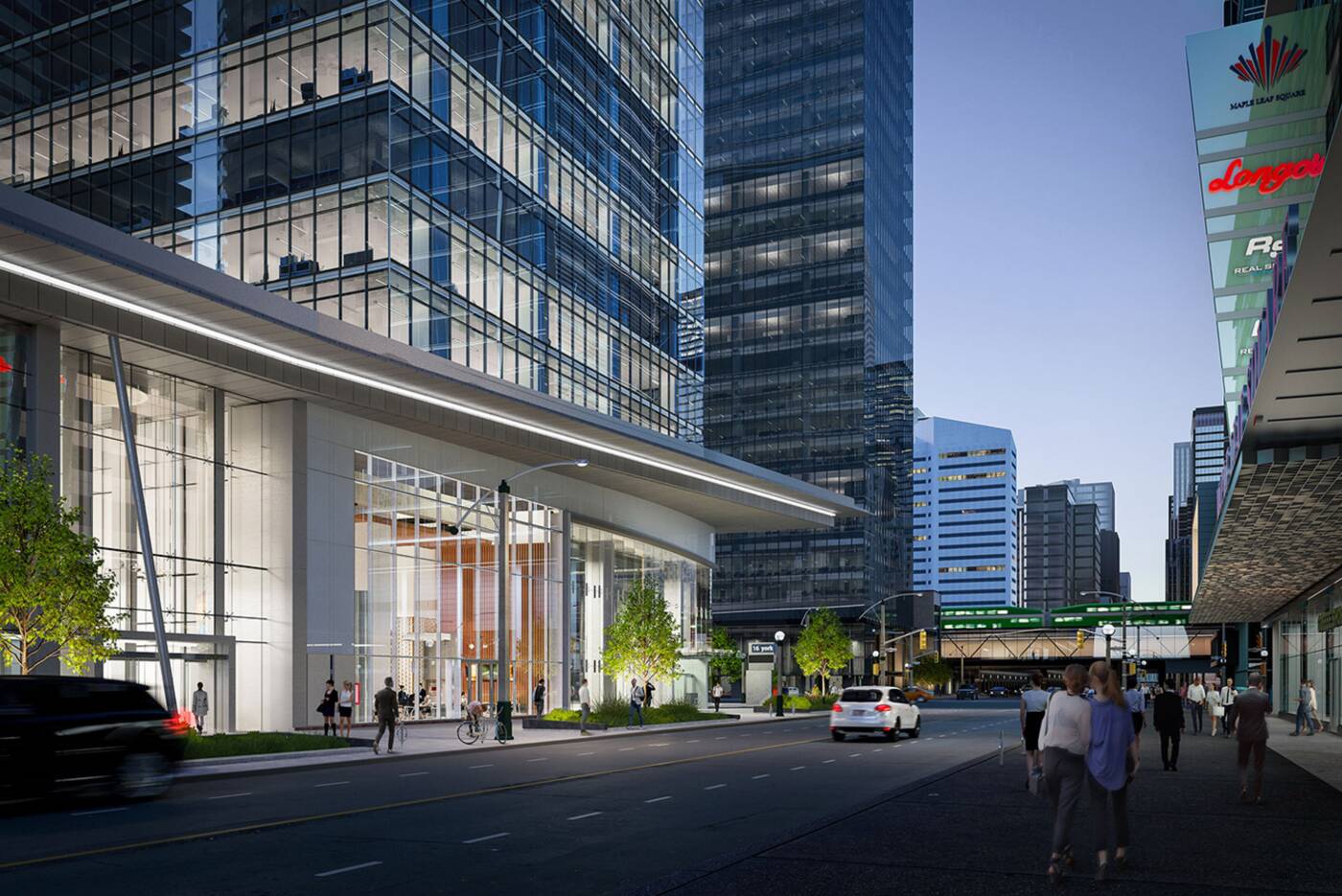 Following the existing trend that for every condo in South Core, you also get an office complex, Cadillac Fairview will soon break ground on 16 York St., a 32 storey tower designed by architectsAlliance and B+H Architects.

The PATH already connects these buildings to Union Station, but what's interesting is how the future roadmap for South Core looks like it'll be even more integrated with the area right around Union Station. 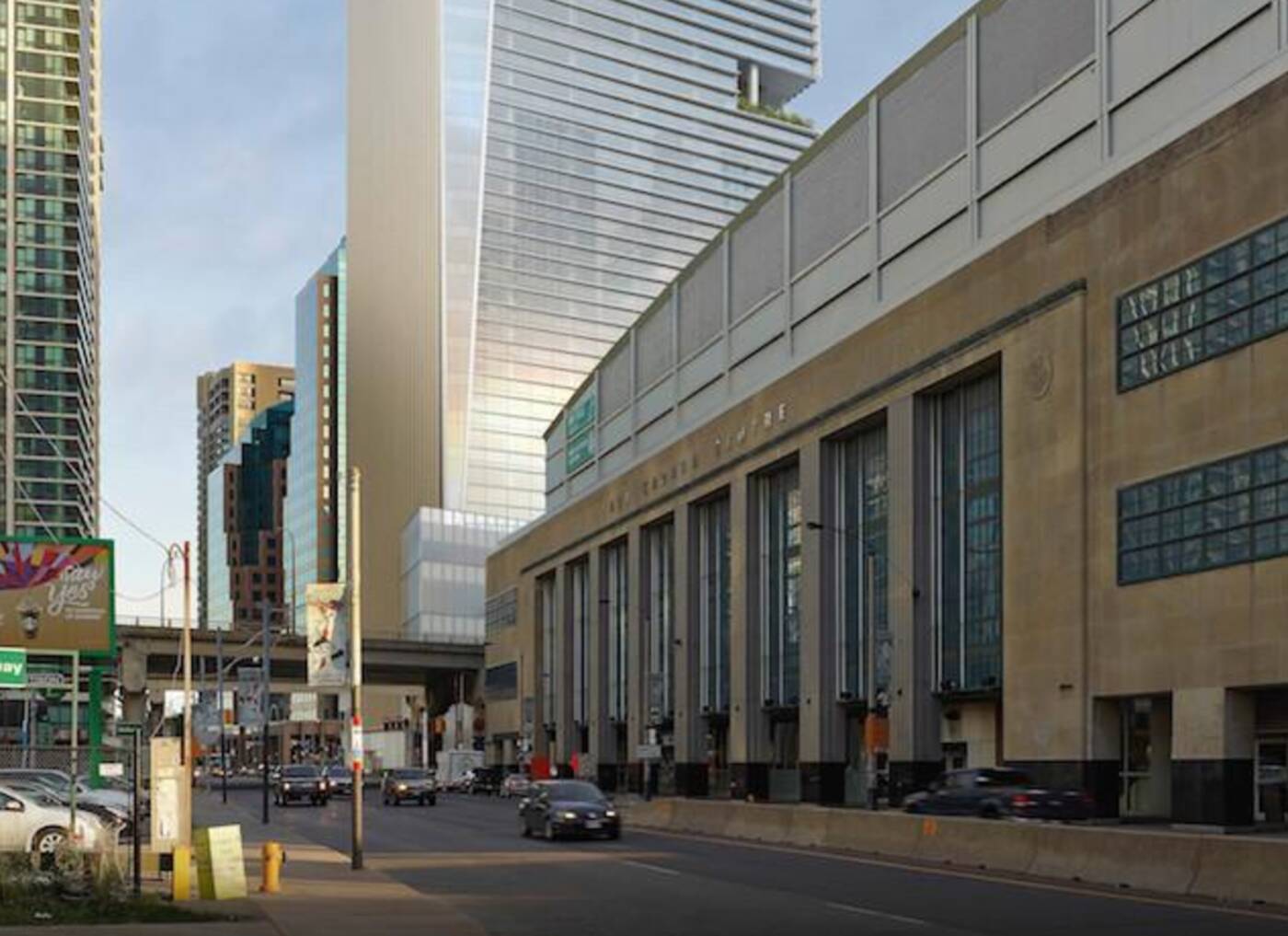 Rendering of 30 Bay St. rising above the Air Canada Centre.

A 45 storey office tower from Oxford and Ports Toronto is in the works at 30 Bay St., right beside the Air Canada Centre. It will eventually brush up against the massive Bay Park Centre, which plans to transverse the railway tracks with a vertical park. 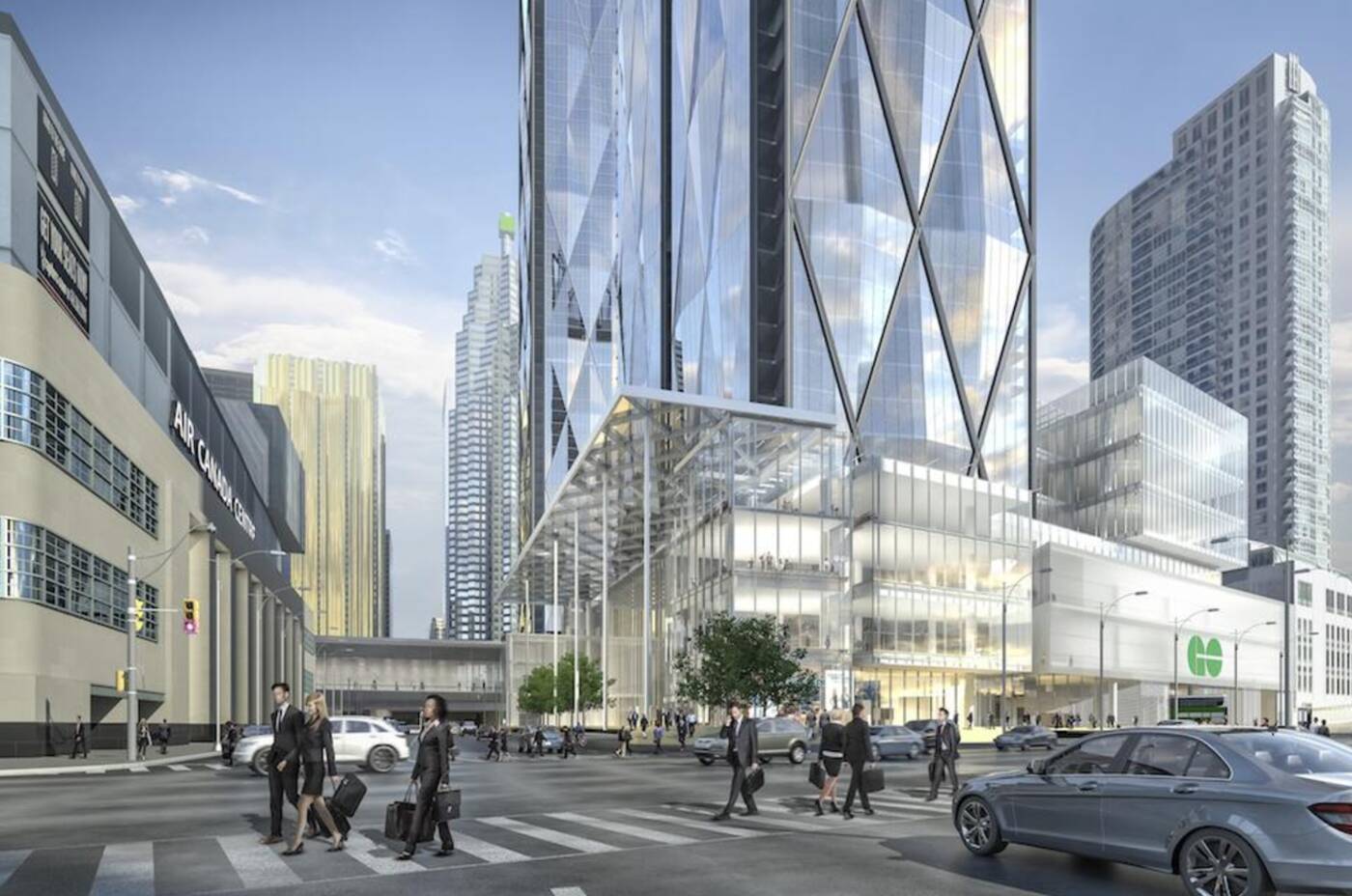 Bay Park Centre might help to connect South Core with the area north of Union Station.

South Core's name and existing identity stem from its separation from the area north of Union Station, but as each empty plot of land is developed and connected, the lines are sure to blur over the next decade.

It's strange to think that much of the land on which one of the most densely populated and active areas of the city is being built didn't even exist a century ago. Soon it might be the heart of the city.