A history of Toronto transit dreams as told in maps

If you believe in the multiverse theory, somewhere out there in another reality there's a Toronto transit system that covers the city like a grid with subway and LRT lines exactly where we need them.

In this ideal but inaccessible place, there's a Downtown Relief Line, a subway underneath a stretch of College St. an LRT on Jane St. and electrified GO trains running across the city.

Toronto has never been short on transit plans, you see. It's the execution and funding that have repeatedly got in the way. And so our archives are full of unfulfilled proposals and cancelled transit plans.

For an idea of how good we might have had it, here's a look at the maps of our lost transit dreams. 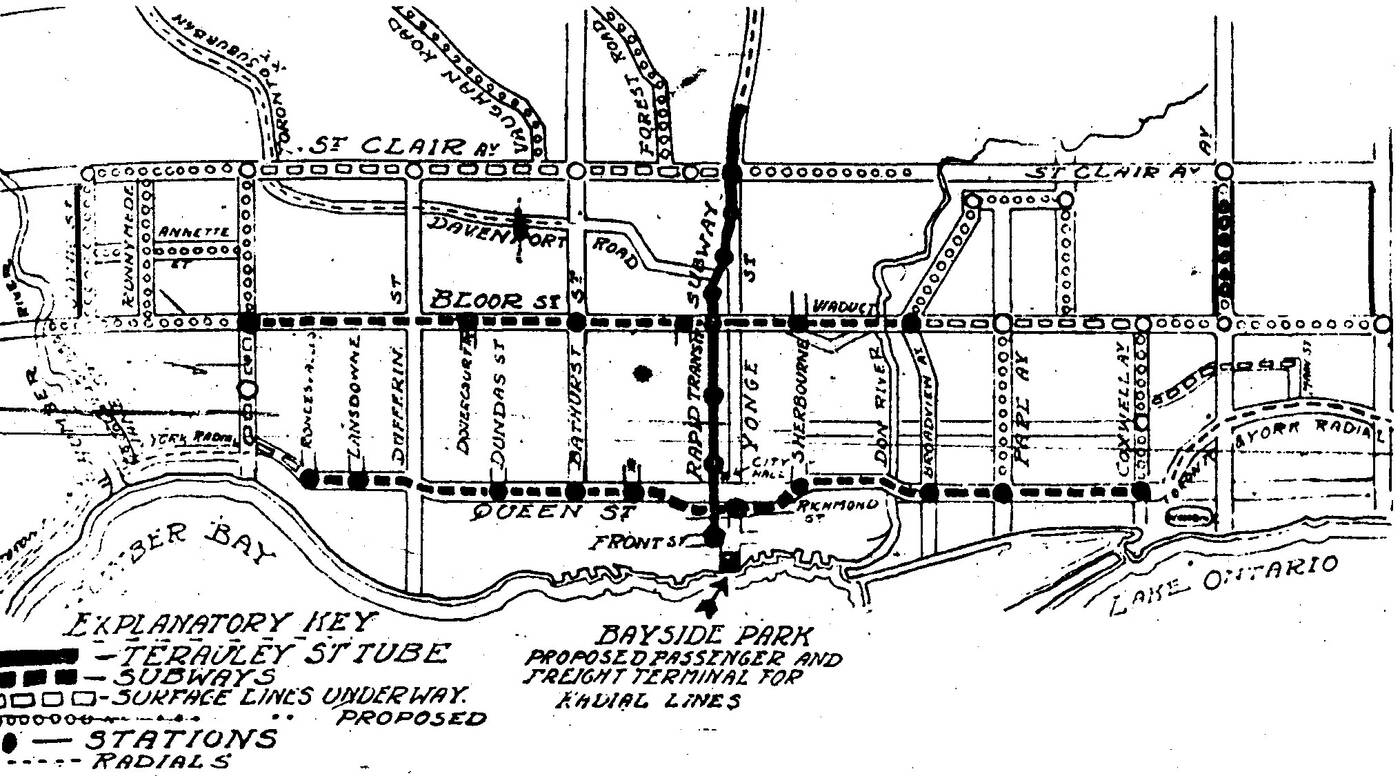 The idea for a subway in Toronto dates back far before the 1954 opening of the Yonge Line. As early as 1909, the subject of building a subway in Toronto was on the city's agenda, and a series of proposals were considered included one from American engineer James Forgie from New York firm Jacobs & Davies (top photo).

It would see three subway lines built to service the east, west, and centre of the city. This plan had competition from one devised by assistant city engineer E.L. Cousins, who conceived of lines on Yonge, Queen, and Bloor streets (above map).

Alas, none of the plans were meant to be, as a city referendum killed the project in 1912 when voters balked at the increased taxes required to complete the project. Thanks, guys. 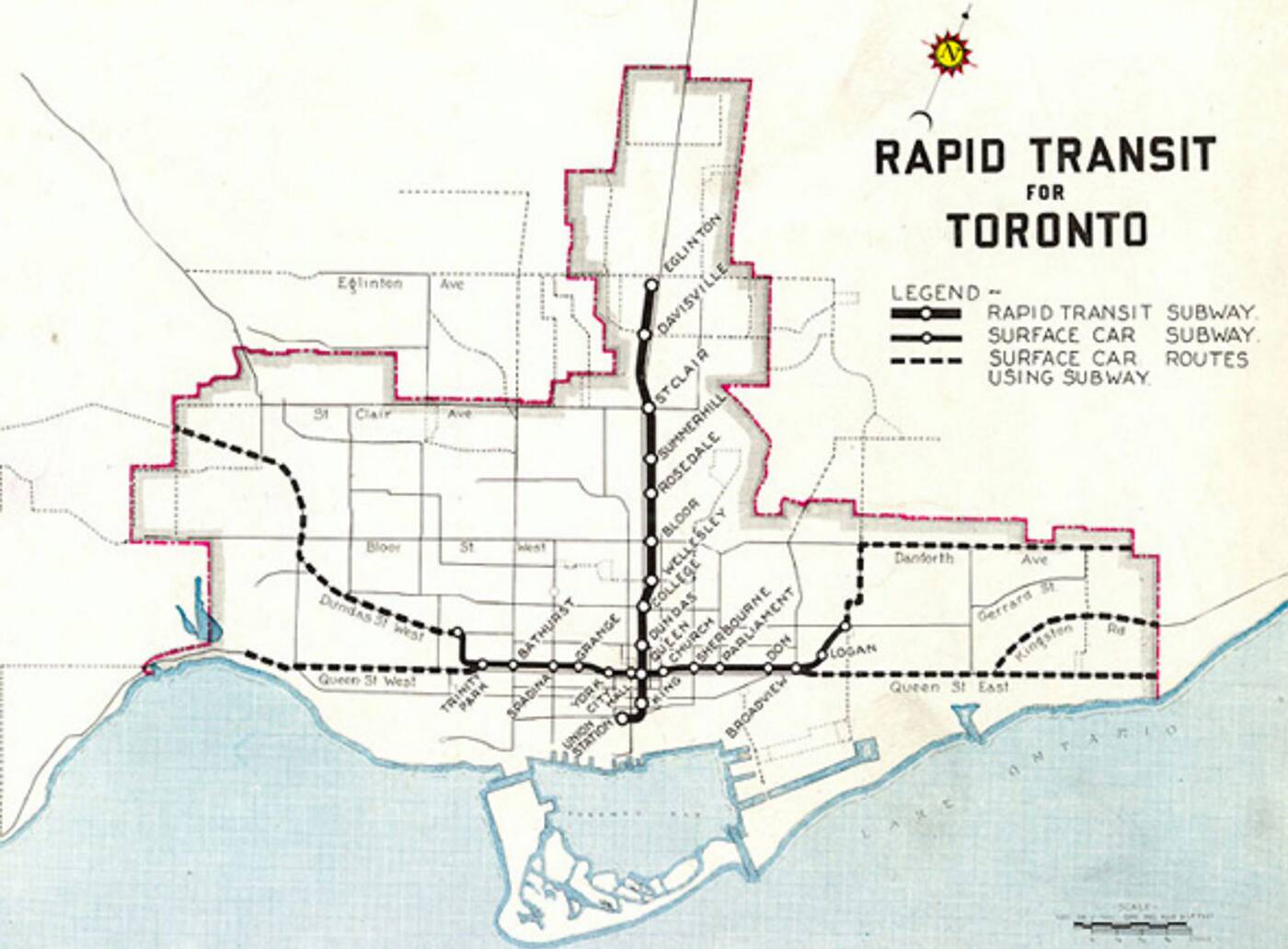 Fast forward to 1942, and the next proposal for underground transit in Toronto was pitched as two streetcar subways, one running in a trench behind Queen St. and the other heading northbound between Bay and Yonge streets.

The latter was re-figured as a heavy rail subway in 1945, but the Queen Line remained was eventually killed when the city decided to build the Bloor-Danforth Line. There's even the shell of a connecting station at Queen St. 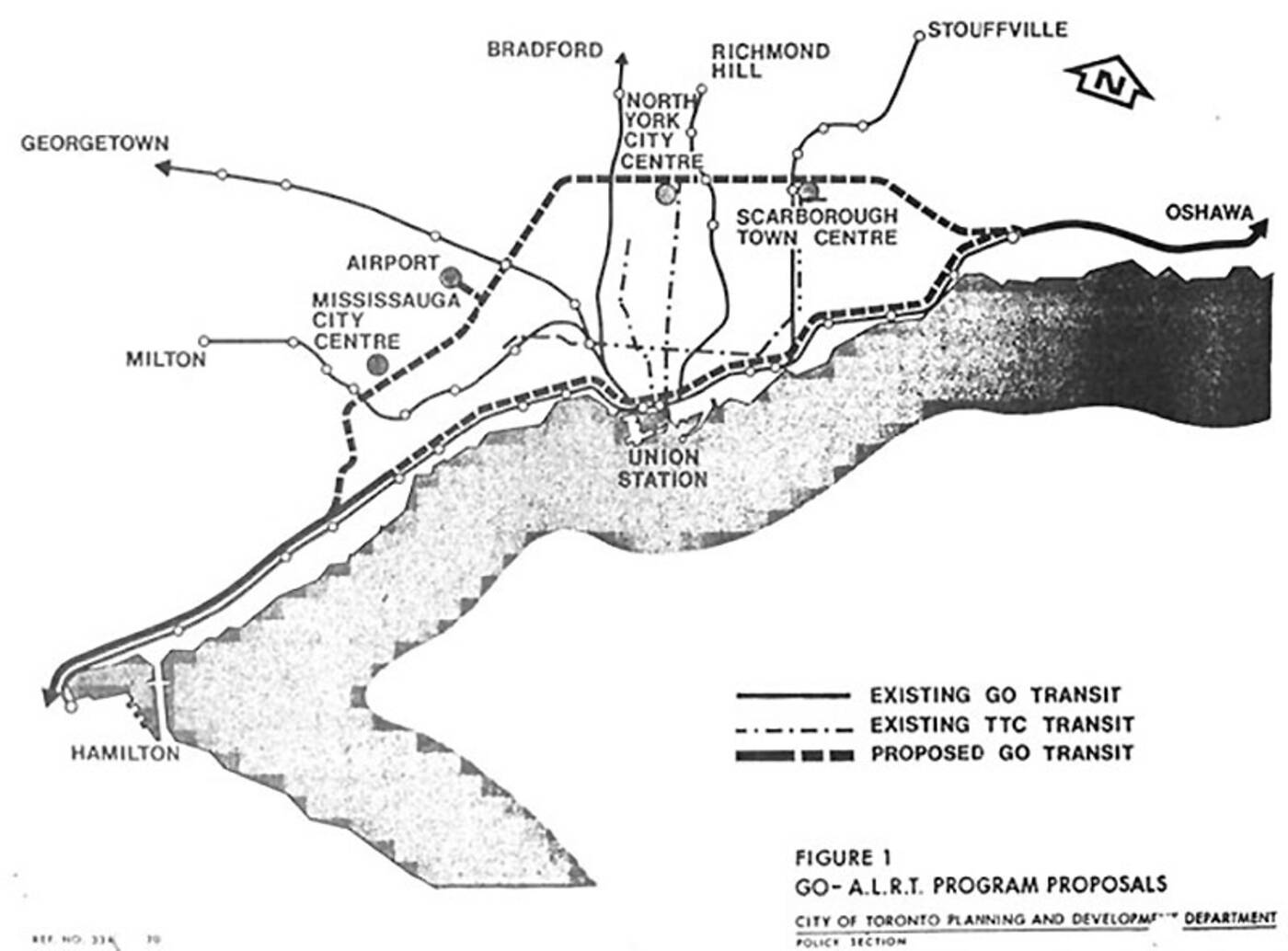 At the outset of the 1980s, GO Transit had its own major expansion plans. Paying steep fees to rent space on CN Lines, the idea was to buy adjacent land and run Advanced Light Rapid Transit (similar to the Scarborough RT) on two east-west lines through the GTA.

The project proved troublesome from the beginning thanks to the technology required to operate automatic trains and spiralling costs. It was eventually scraped when Bill Davis stepped down as the Premier and the PCs were eventually voted out in favour of David Petterson's Liberals. 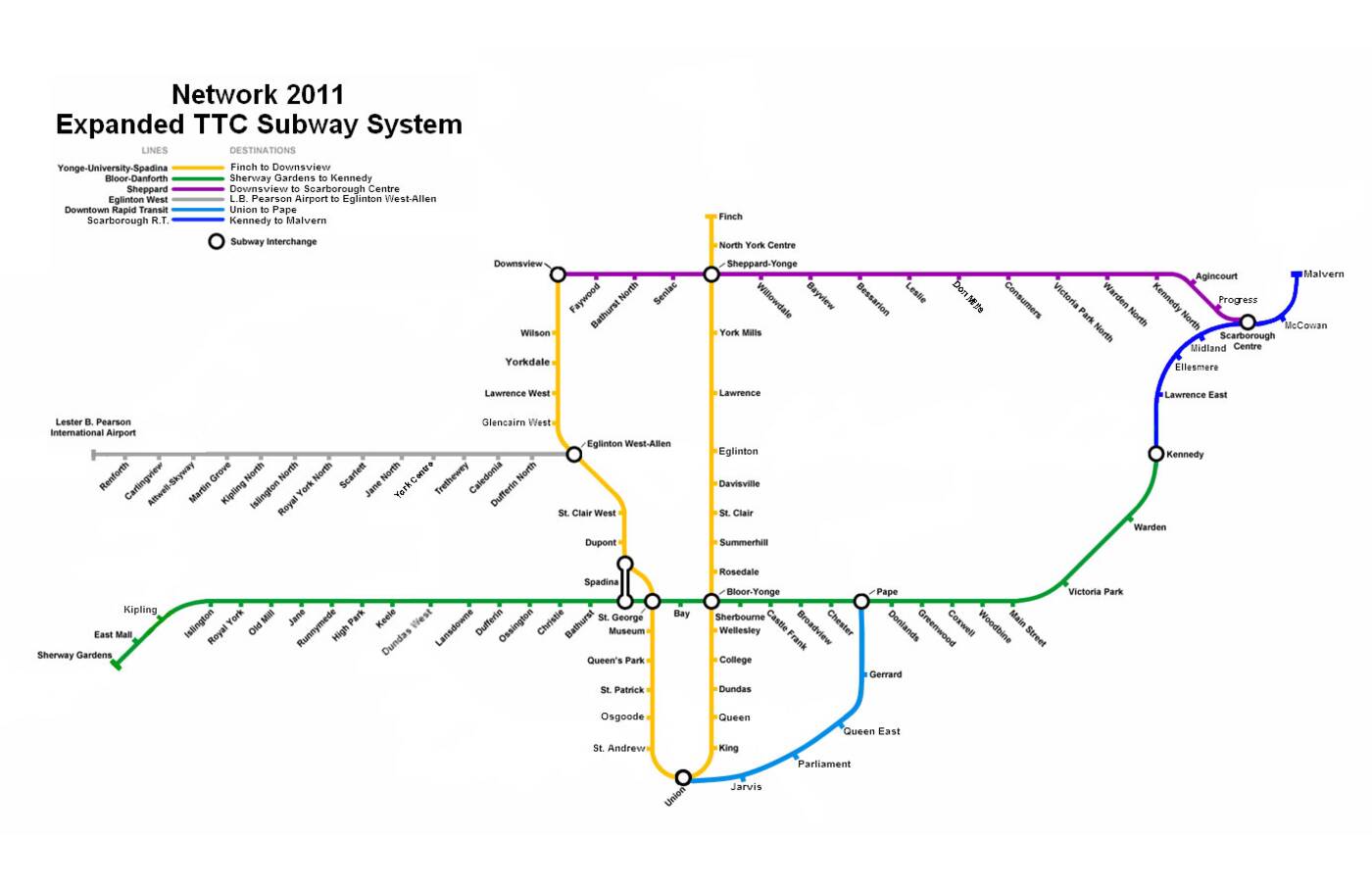 By far the most notorious failed Toronto transit plan of the 1980s, however, was Network 2011. This would have changed anything for the city, with a Downtown Relief Line, a full Sheppard Subway Line, and an eventual LRT or subway across Eglinton to the airport.

The original plan was modified a number of times as provincial leadership changed, eventually losing each of its elements except the eastern portion of the Sheppard Line. From big dreams to bust in the span of a decade. 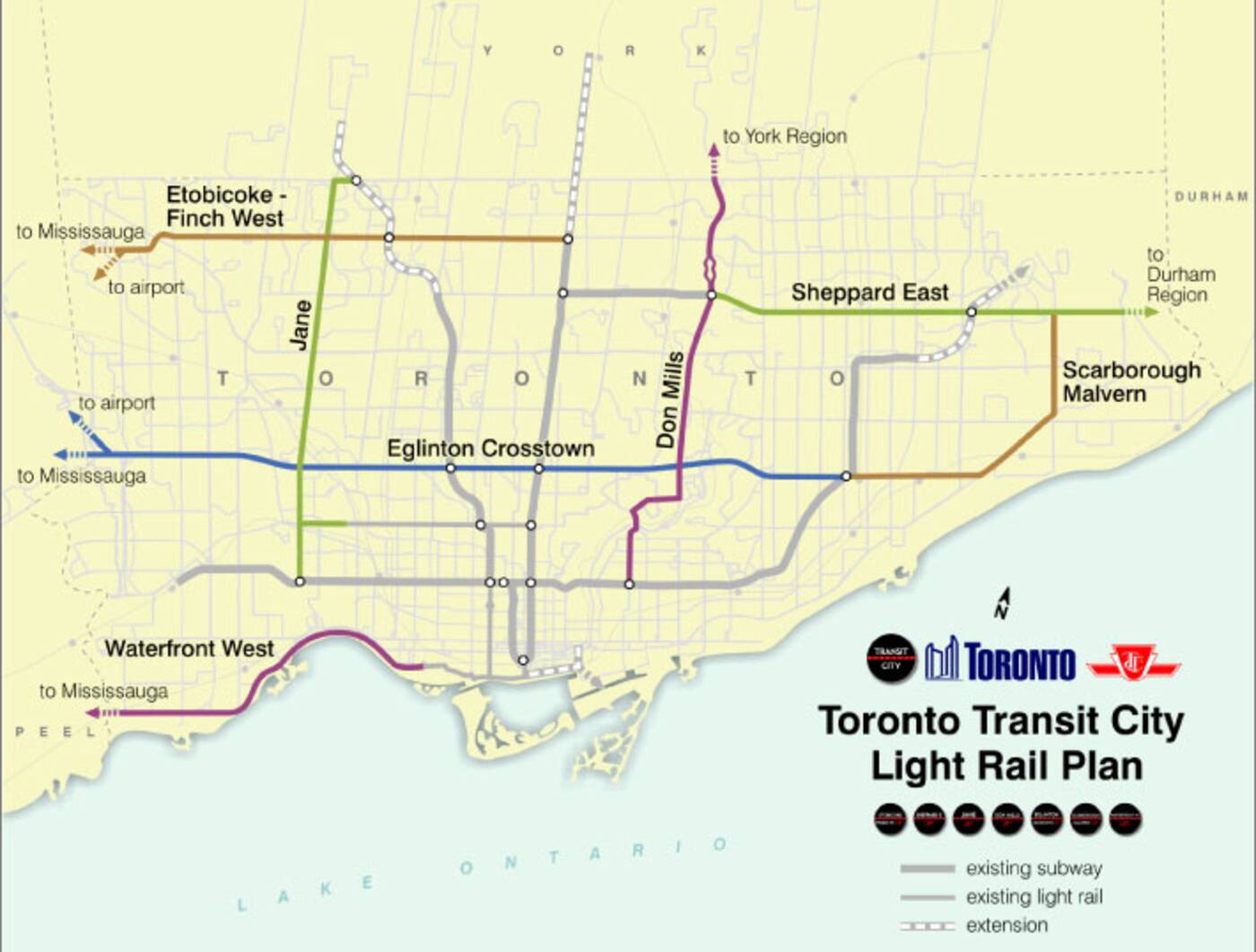 The next major expansion plan came from David Miller. Transit City was a bold vision to fill in Toronto's transit holes with seven new LRT lines. It was promptly killed when Rob Ford took office as mayor in 2010, but slowly pieces of it crept back into existence. Projects like the Eglinton Crosstown and Finch West LRT were born in the 2007 plan. 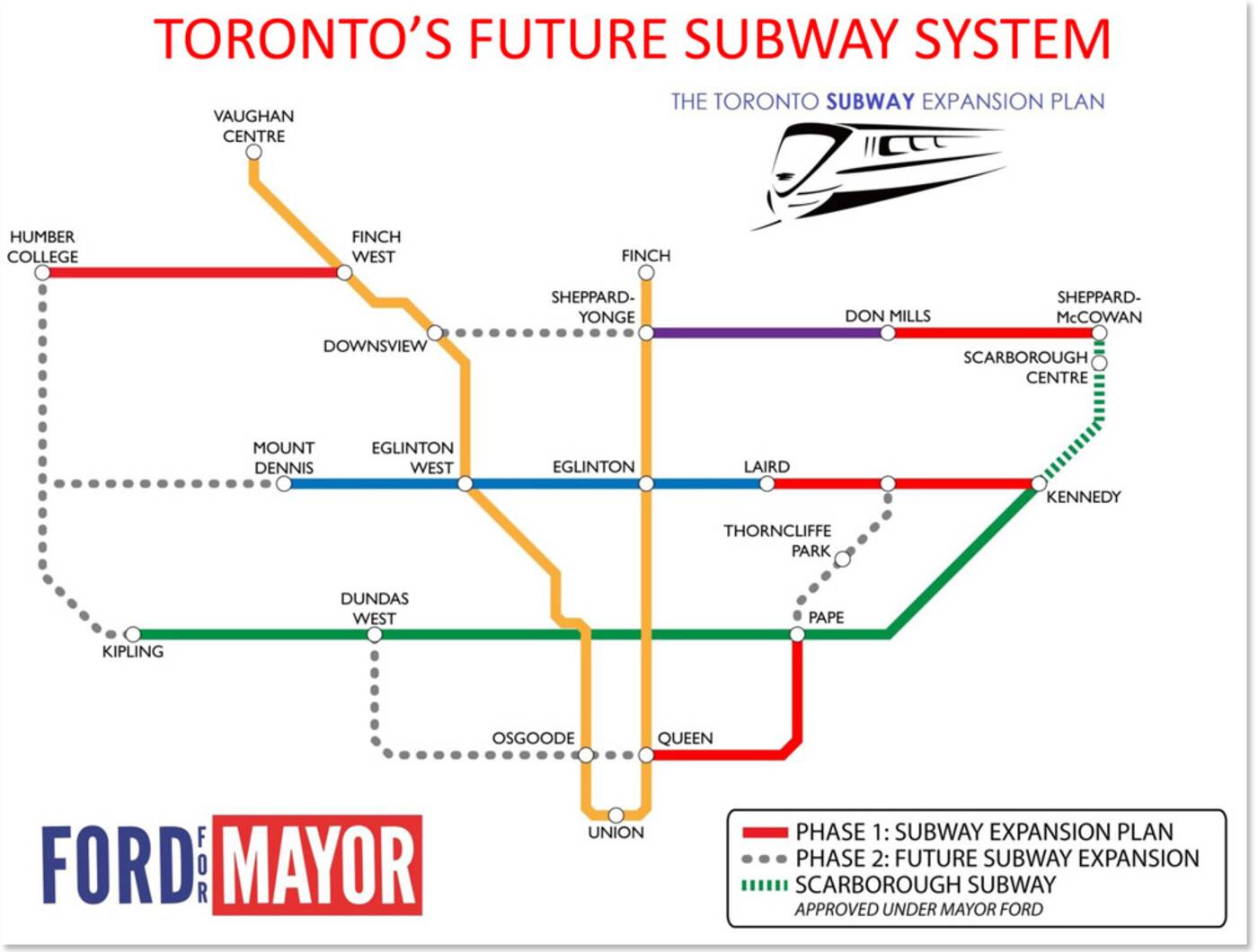 This one doesn't really belong on the list because no one ever took it seriously, but there was a time when Rob Ford seriously tried to convince people that Toronto could build subways everywhere. Alas, this was little more than a fantasy map.